So there we were, back at the 1 mile junction (from Route 191), trying to figure out which was the 4 wheel drive trail while the mountain biking trails were quite obvious.  Scanning the landscape, we noticed two pickup trucks parked in the distance and simply followed the trail they were on back to us; now we knew how to head on. 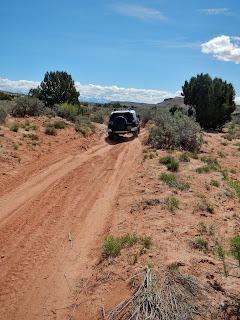 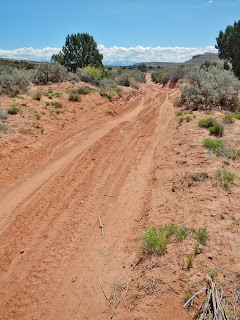 While a passenger car could make it to the dinosaur tracks area (see Part Two), this trail was a definite 4 wheel drive must; having a skid plate helped a lot too, and hope you don't mind tipping to either side here and there.  I'm not huge on tipping vehicles, so I did end up walking a quarter of a mile sometimes, but hey, it's good exercise! 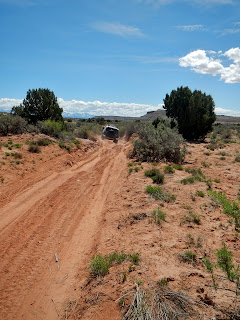 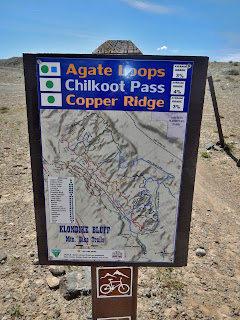 At mile mark 1.4, there is a junction for three separate mountain biking trails; at 1.6 miles, the Dinosaur Stomping Trail begins which can be hiked or mountain biked.  As much as we wanted to see the other dino tracks, we were not fully prepared; not enough water for a major hike plus continuing our exploring of the trail we were currently on.  Have to play it smart to stay safe and healthy out here in the desert; it's not a Disneyland park, and it's most definitely NOT idiot proofed. 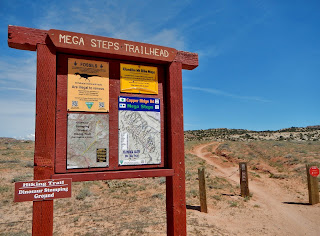 Driving on, the landscape stays pretty much prehistoric; mile mark 2.3 are bike trails for Baby Steps and Jasper/Agate; 3.3 miles is the Little Salty Trailhead.  Yes mountain bikers, you may all thank me now for giving you this information; investing in maps is still a good idea though.

At about 5 miles the Klondike Bluffs offer up a peak at them; 5.4 miles is a junction and here is where it might get a bit confusing.  So, the sign for Klondike Bluffs points to the left, but there is a sandy trail to the right with no information.  Checking our maps (yes, we carry more than one type always), the trail to the left is the Jeep Safari trail.  Ok, how bad can that be, right?  Wrong!!!  We had only traveled 3/10s of a mile and came to...hmmm, how to describe this....a rather large step to reach the next section of trail.  To the side of it, hikers or bikers could get easily through, as a couple of mountain bikers soon showed us as they whizzed by (showoffs!!!)  Yeah, no, we weren't doing this on our own; at least with Jeep Safari, there is a group of Jeeps and people to help each other out. 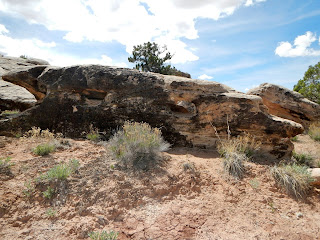 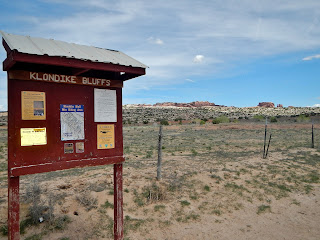 We went back to the junction and sat for a few minutes deciding if we should return back the way we came, or try out the sandy trail that was now in front of us.  The unknown won, and would you believe, in just one mile we reached the staging area on Klondike Bluffs Road (see Part One). 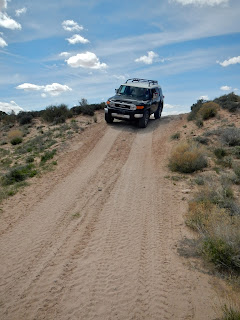 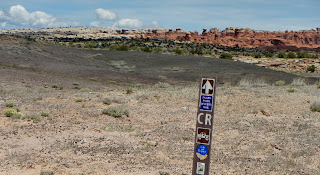 Since we had just traveled this road, we knew that turning left onto it would bring us to the "Blue" movie set; just one mile.  The "Fallen Peace Officers Trail" is located there, so decided to check it out, and have lunch too.  We had only gone one mile which included ascending slickrock before we came to a very rocky section and decided this was best left to ATV riders, not us.  In fact, a senior couple drove by us while we were there, and then back again; they seemed to be having a good time.  However, it was a glorious picnic site with stupendous scenery; that's why I always tell folks, "Bring a picnic!". 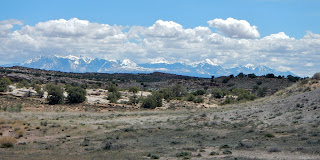 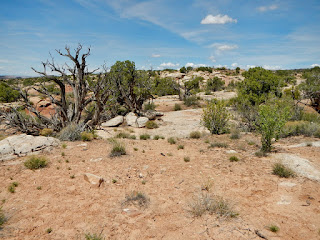 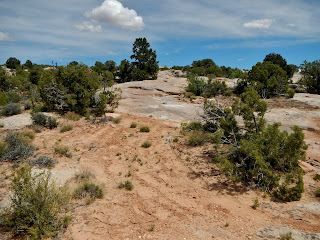 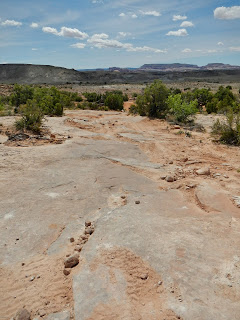 6/10s of a mile later, we came upon another section of "Fallen Peace Officers Trail" and tried it out; a little rocking and rolling until a sign (3 miles later) that stated we had reached the boundary of Arches National Park; no motorized vehicles allowed.  Now who came riding towards us, that senior couple and they were as confused as we were.  How can you have a 4WD/ATV trail that crosses through a National Park, but you're not allowed to ride it???  We know this trail also has a start off Route 191, but the maps have it looping around several times, including through the Arches, so....yeah, confusing.  Oh well, back to Klondike Bluffs Road....

About 2.5 miles onward we noticed another sandy trail marked with cinder blocks; seeing the Bluffs, and Tower Arch, across the desert, well hell yeah we were trying this out!  There were several camping areas along the way, and the trail finally did end at a dry wash, but we were able to get some nice shots of the Bluffs and Tower Arch (thanks to the zoom lens on my camera). 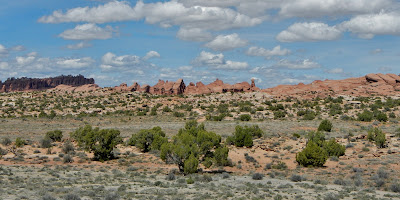 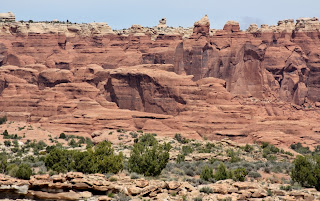 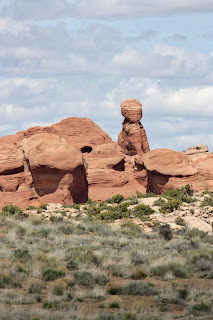 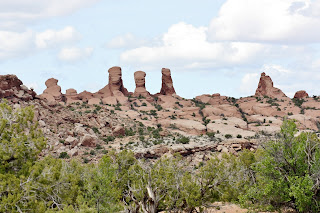 We went up and down a few other trails, but nothing brought us any closer to the Bluffs.  It was starting to get late, we were very exhausted and headed towards Dalton Wells; we did get another view of the Marching Men though.  We got home to Monticello in time to say, "The hell with it, lets go eat out at Shake Shack!" 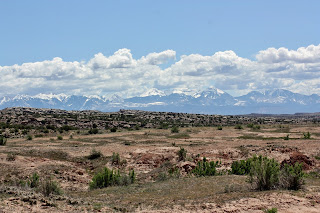 Future plans are to come back, and check out more trails we saw, but just were too tired to explore this day.