Almost three years now since we first visited Dalton Wells, and I did a blog post on the Concentration Camp that was there in the 1940s.  Driving through again, the wire and wooden post gate is not there, and it is easier to see the remaining foundations of the buildings that once stood on the land.  RV campers were now parked in areas we would explore and let the dogs run free, ATVers zoomed onto one trail from another; and this was only April! 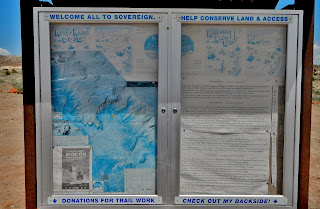 Well, we came all the way up here to Moab to explore some trails we'd not done before, and it wasn't long before we came to an information board.  Now I know our maps indicated we could reach Klondike Bluffs and Copper Ridge from Dalton Wells, but this info. board verified it for us. 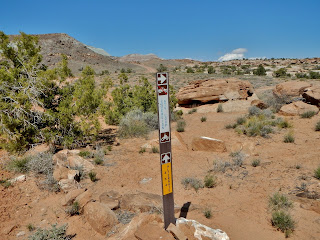 It is best to have 4 wheel drive out here; the trails are natural terrain, maybe slightly graded, but that doesn't mean the weather didn't have a picnic tearing ruts into the dirt.  Very soon we came to an uphill section that basically was rock crawling over slickrock. but it quickly turned back to sandy soil and remained that way until we reached Route 191 again (yes, it's a loop trail).  The landscape, to a novice, would look mainly the same; but after traveling up, down and all around these desert trails for seven years, we could pick out the differences easily.  The majority of trails are well marked for ATVs only, mountain biking, 4WD, hiking or combination. 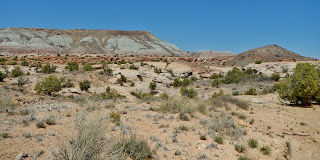 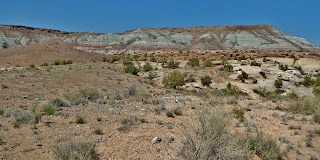 Of course none of my desert posts would be complete without showing an example of plant life; delicate flowers growing out of the sand and rocks.


After many a twist, turn, uphill, downhill....ok, spare me a moment to vent.  Why the hell do people come out here and complain about the trails, and that they are not paved?  Seriously, get a grip and pull hard!!!  Anyway, before beginning an ascent, I decided to take a photo of where we had come from, and where we were continuing to. 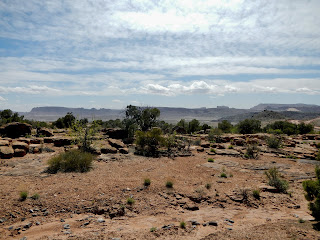 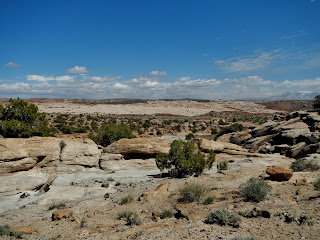 We were driving along when we began to see the Klondike Bluffs in the distance; we'd seen the road to them off Route 191, but kept putting off traveling on it.  So I better warn you now, there will be two more parts to this adventure...Copper Ridge  - Dinosaur Tracks and Uranium Mines; and a closer view of the Bluffs, Tower Arch, and the Marching Men...part one, what you're reading now, is your basic tease. 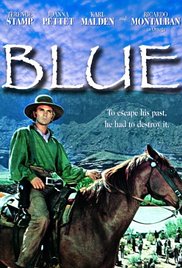 Moab is a very much used area for the film industry and commercials; so it was not unusual to find the remains of a movie set.  This was from the 1968 Western, "Blue"; and while I learned about the Southwest via western television shows and movies, this was one I did not see.  From the reviews I've read, I didn't miss much. 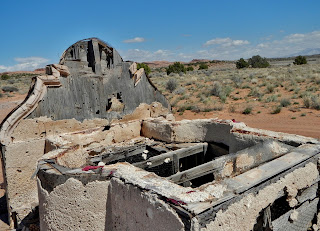 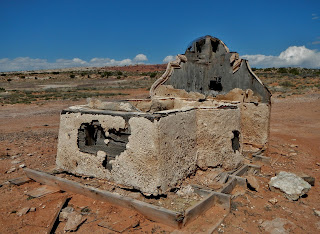 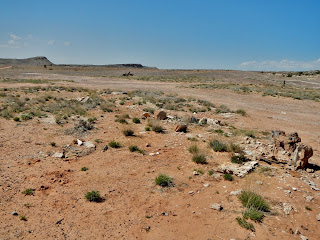 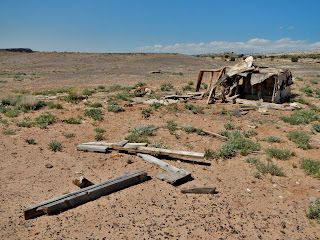 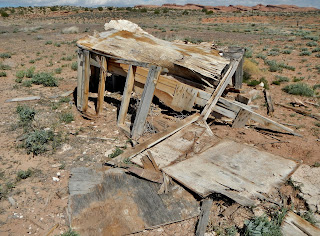 We got a better viewing of Klondike Bluffs, and the Marching Men, as we made our way westward.  There were trails that led closer, but that's for the telling in Part Three, and will include Tower Arch.  So, once again, here's a tease. 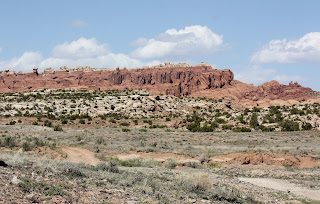 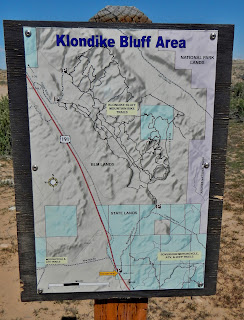 Almost to Route 191, and we can see the Moab airport; there is an information board with mountain biking trails outlined.  While we saw a few mountain bikers on a hill; we did see dirt bikers too who were kicking up lots of dust.  That is until they saw me taking photos, suddenly they slowed way down...not sure if they were posing for photos, just being polite, or both.

﻿﻿
I've added this map to help you see the trails, also this will help you understand parts two and three, and where we exactly were. 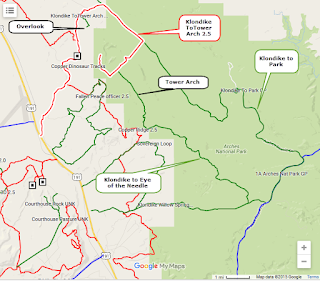 We spent two days traveling around, and it still wasn't enough!  I guess you could say we're desert junkies, but this addiction is extremely healthy....better than kale smoothies, that's for sure!!!

Posted by Mary Cokenour at 3:04 PM