A Drive Through the La Sal Mountains.

The La Sal Mountains have already had a light snow on them, twice, in this past month.  It quickly melts away, but reminds us that winter is just around the corner.  Anyone wanting to take the ride through the mountains, via the La Sal Loop Road, should do it as soon as possible; for once it snows deeply, well...

Roy and I took advantage of a warm, partly cloudy Sunday to take the ride; instead of beginning on the Creek Road (Grand County Road 128), we began on the Old Spanish Trail Road.  This road can be accessed from Route 191 near Ken's Lake, or Old Airport Road; just follow the signs.  As we ascended, we were now on San Juan County Road 127 (CR 127); yep, the La Sal Mountains span across both counties.  At the first high corner turn there was a pull in area; the Moab Rim could be seen in the distance.

Twisting and turning through the mountains and forest was so relaxing; occasionally passing a lake or campground.  There were many signs for ranches, but the majority rented out cabins to visitors for the warmer months. Eventually you'll see a sign indicating County Road 1704; you've just entered Grand County.  At one point, we looked down into a valley (Brumley Ridge) full of log homes or chalets; almost like a scene from the Swiss Alps.

At Bald Mesa we got our first viewing of Castle Valley; when you take the La Sal Loop Road off of CR 128, you will drive through this area.  Two formations you'll see immediately will be Castleton Tower and The Rectory (looks like nuns standing before a priest).

A little ways, as we began a downward descent, is the trail to Miners Basin; a miners ghost town with cabins still standing.  It's a three mile hike, one way, and we were not prepared to do this, so another addition to our to-do list.  We did pull in just past the trail to take a photo of the area in that direction.

Some of the curves do narrow in spots, but vehicles coming in opposite directions can still pass each other easily.  As we rounded one corner, we got our second viewing of Castle Valley, and our first viewing of the Porcupine Rim.

We knew we were getting closer to the end of the La Sal Loop Road as Castle Valley became more and more into focus.  Suddenly we came to a junction, to the left was CR 128, the River Road that led back to Moab, or up to the ghost town, Cisco.  However, Road 207 led to Gateway...Gateway, Colorado; oh we had a choice on our hands now! 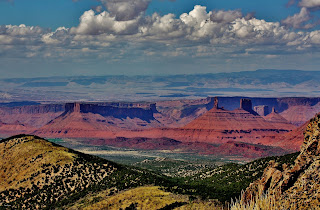 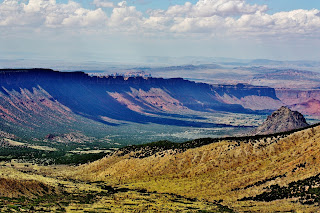 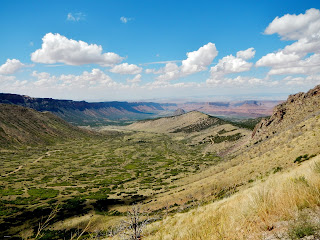 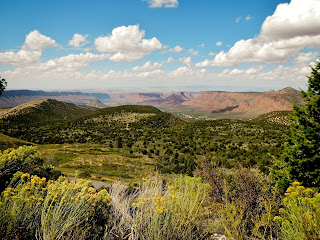 Castleton Tower and The Rectory 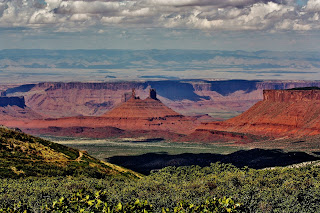 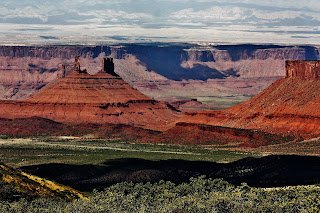 So, back to that question of which direction we chose to go in; well you'll just have to wait for the next posting on this blog for the answer.