"Get Your Zen On" at Bug Point. 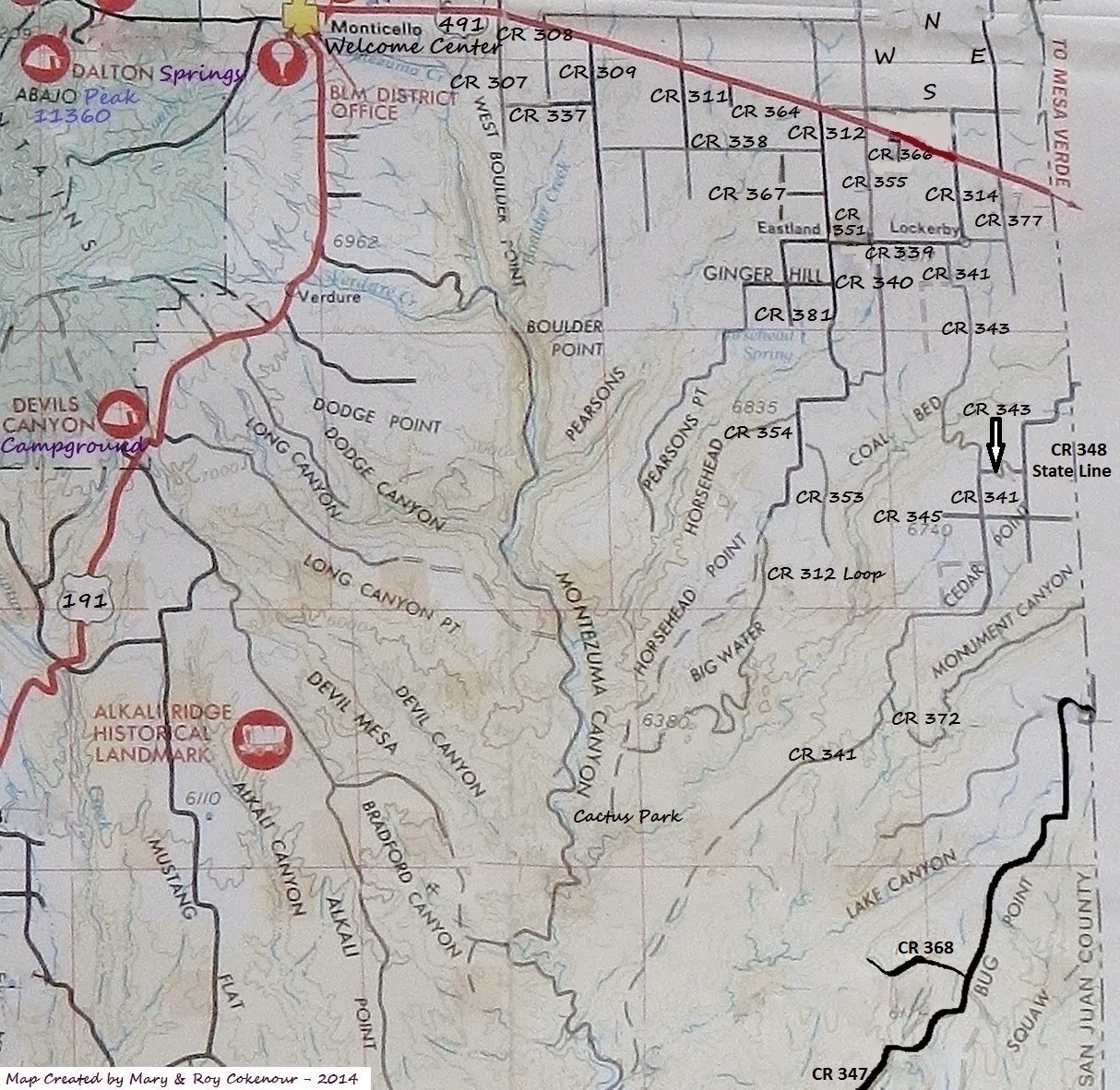 The total length of Bug Point Road is 19.2 miles where it ends (or begins) at State Line (CR 348); the roads to Dove Creek, Colorado (Route 491) are outlined on this map (the same route once you get out of Monument Canyon (CR 372). 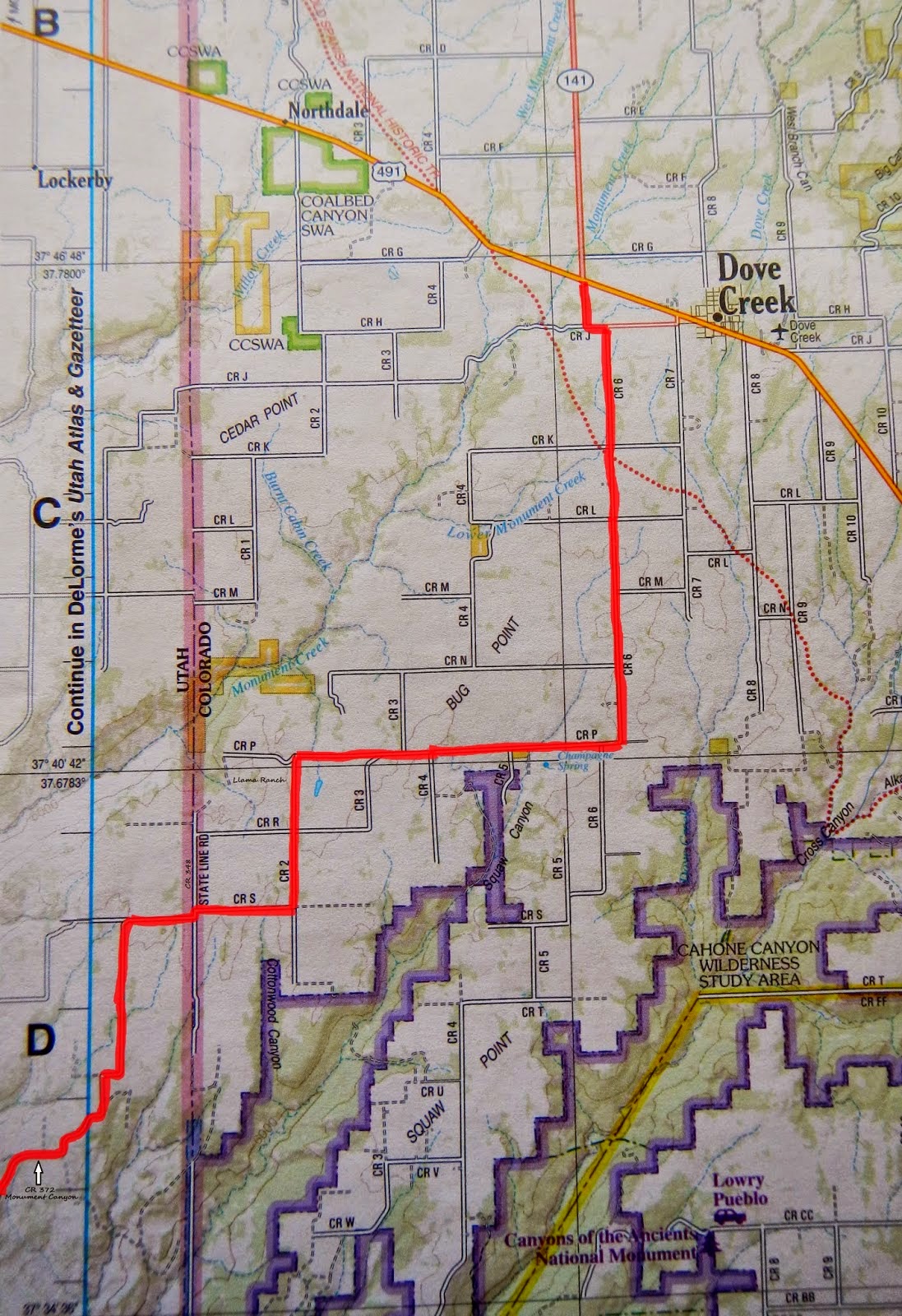 So, you're now armed with two maps, but you're now wondering why you should go to Bug Point at all.  When I entitled this "Get Your Zen On", there were two meanings behind it; the first is the complete serenity of the area.  Quiet, total quiet, so quiet that the only thing we could hear was the occasional sound of an airplane as it flew overhead.  This road is graded (flattened) dirt/gravel for the entire 19.2 miles; the scenery is breathtaking; ATV trails are all over for those interested (we saw a few parked vehicles with trailers, but didn't hear the ATVs at all); a couple of ruin sites off the road itself.  This is the perfect place for getting away from it all, giving your brain and body a rest, and just relaxing!

The second reason is Open Sky Wilderness Therapy; a holistic wilderness retreat and program for troubled teens, young adults, and families in crisis.

Oh, a little history on how Bug Point got its name.  Cattle Rancher, Bill Graham; previous employee of the Carlisle Cattle Company stayed on in the area in 1890.  He is credited for naming Bug Point, Bug Canyon and Bug Springs after the son (Charles "Bug" Johnson) of a fellow rancher (Charles "Racehorse" Johnson).  He is also credited for naming Secret Springs, Cedar Point and Dove Creek (officially established as a town on January 16, 1915). 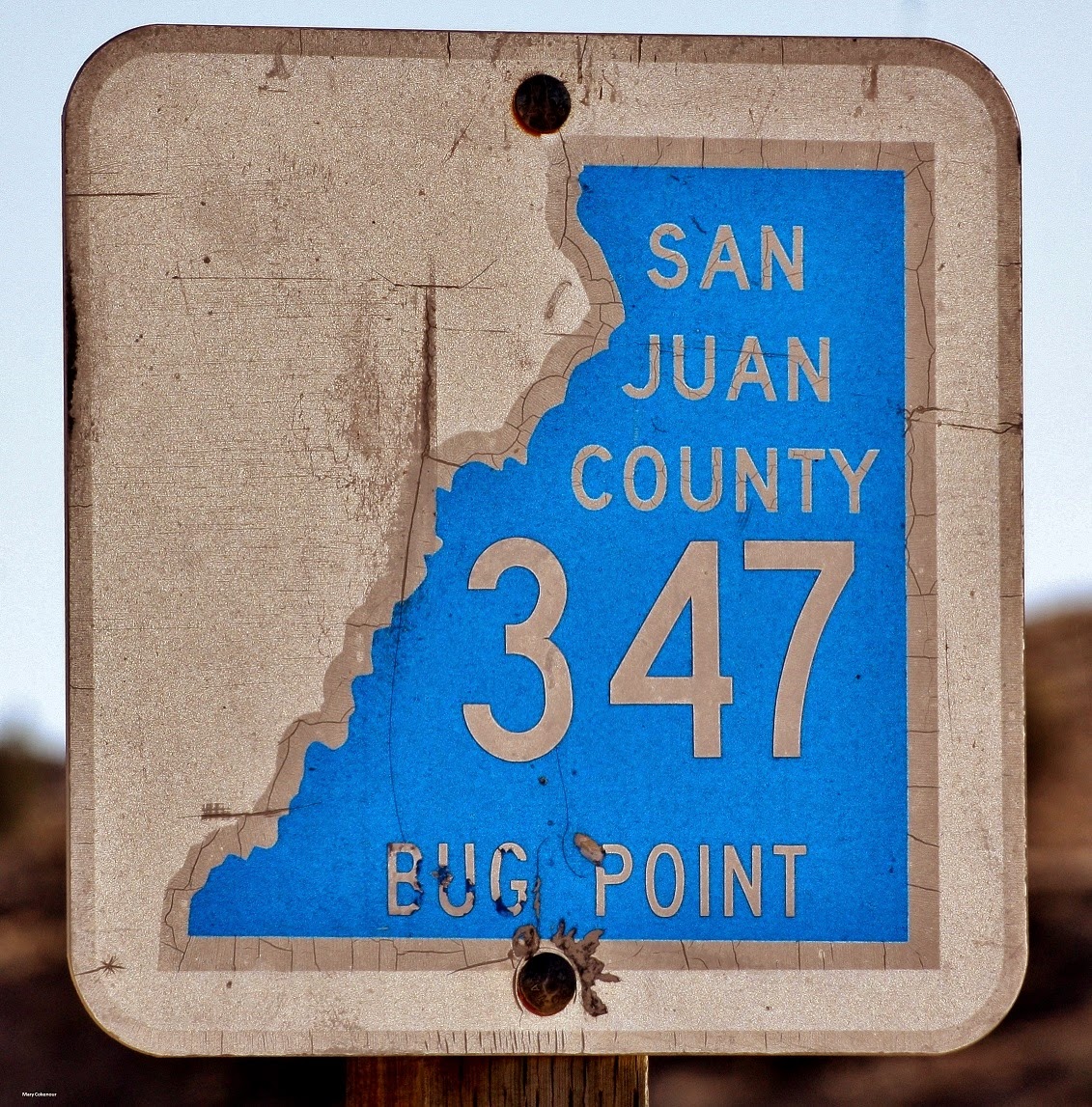 Time to show you around Bug Point; after taking the left hand split from CR 206, go 2/10ths of mile to another split; again, go left to stay on CR 347.  There is the occasional ranch along this road, so a local might pass you by now and then; just smile and wave.   At 3.4 miles, the road curves upward and to the right; time to take a break to let Jenna romp around; yeppers, we had Jenna with us.

We drove for another few miles before deciding it was time for lunch; we always bring picnics with us when we decide to do canyon drives. 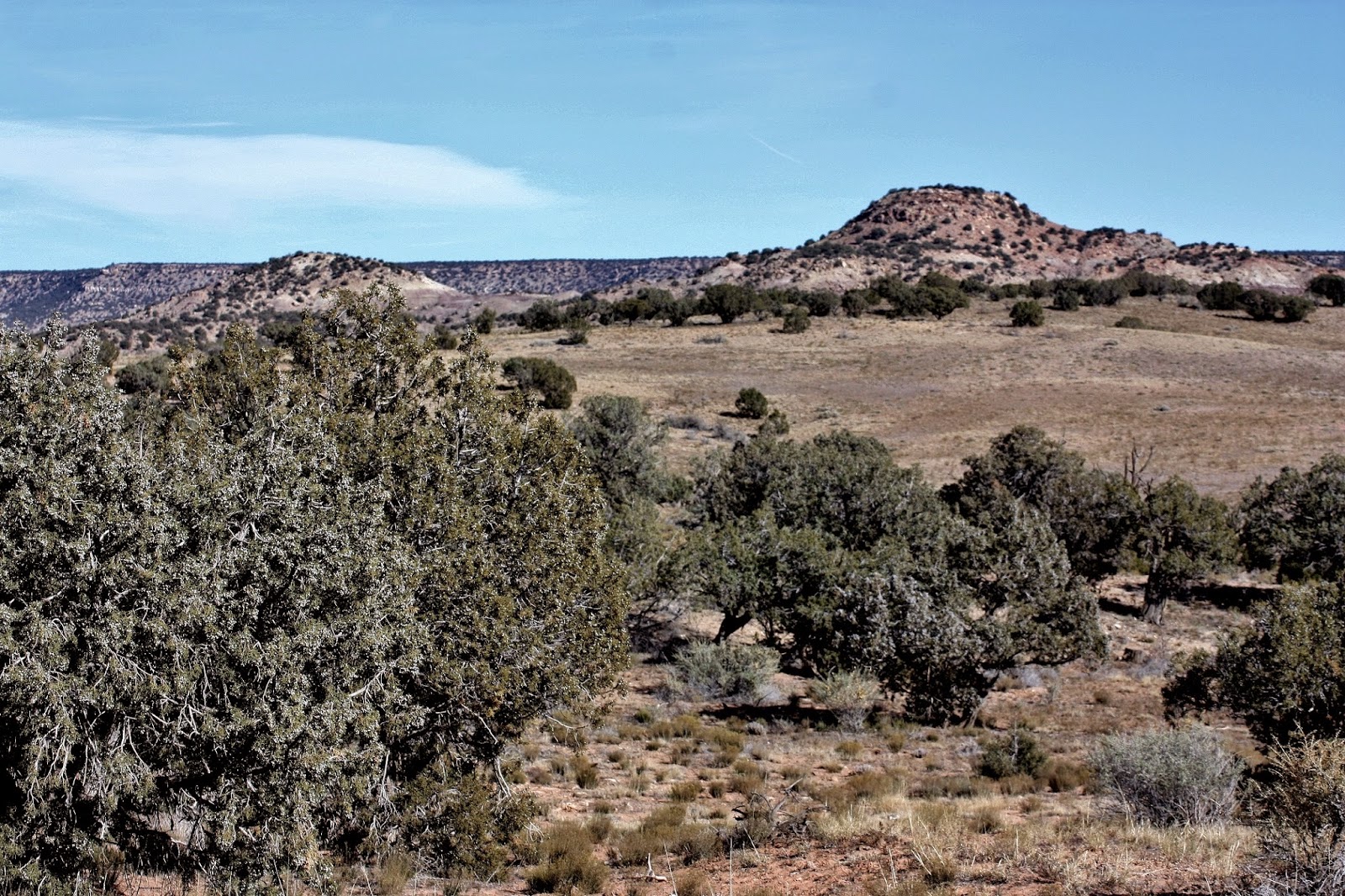 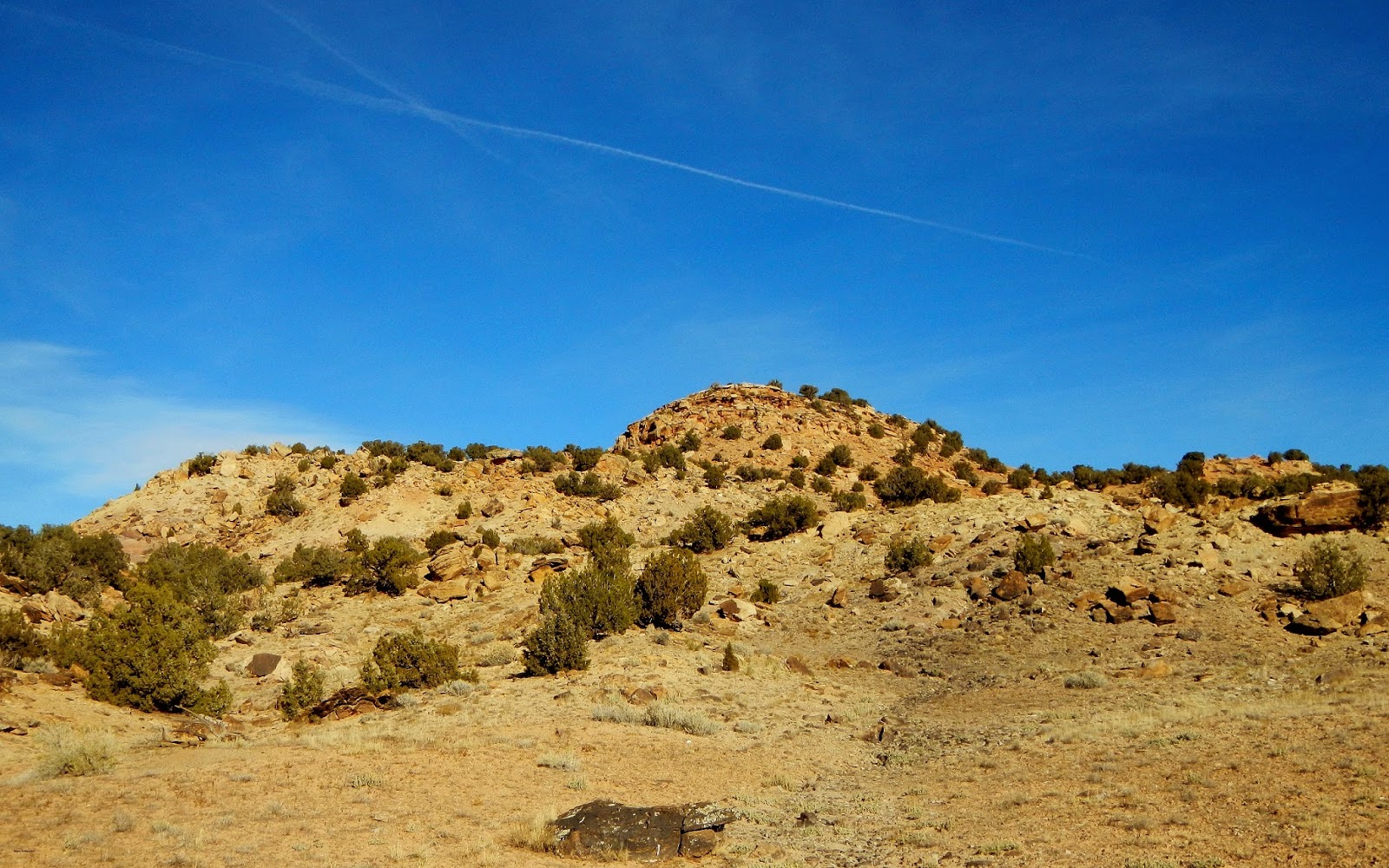 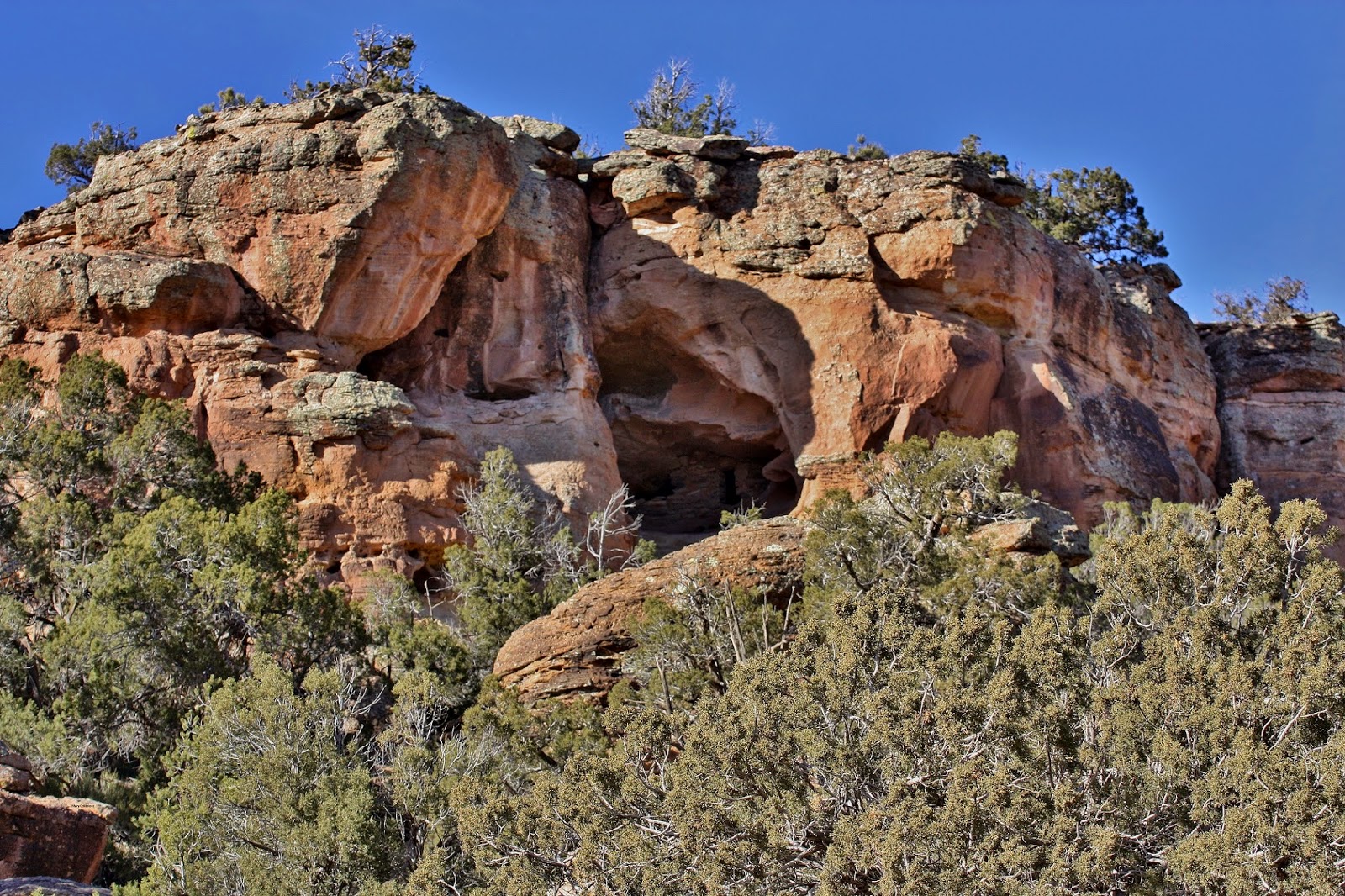 Back on the road again, it was 9.6 miles that we found ruins up on the cliff wall; it's a steep walk (45 degree angle) for 200 feet to reach the ruins.  Along the way, use your imagination to notice the "Mummy Head" formation.  While doing the hike up, I came upon an area that smelled distinctly of cat urine; I'm not talking the kitty cat that sits on your lap either....I'm talking mountain lions.  Keep aware in areas like this, and being armed could be a help; do NOT travel alone. 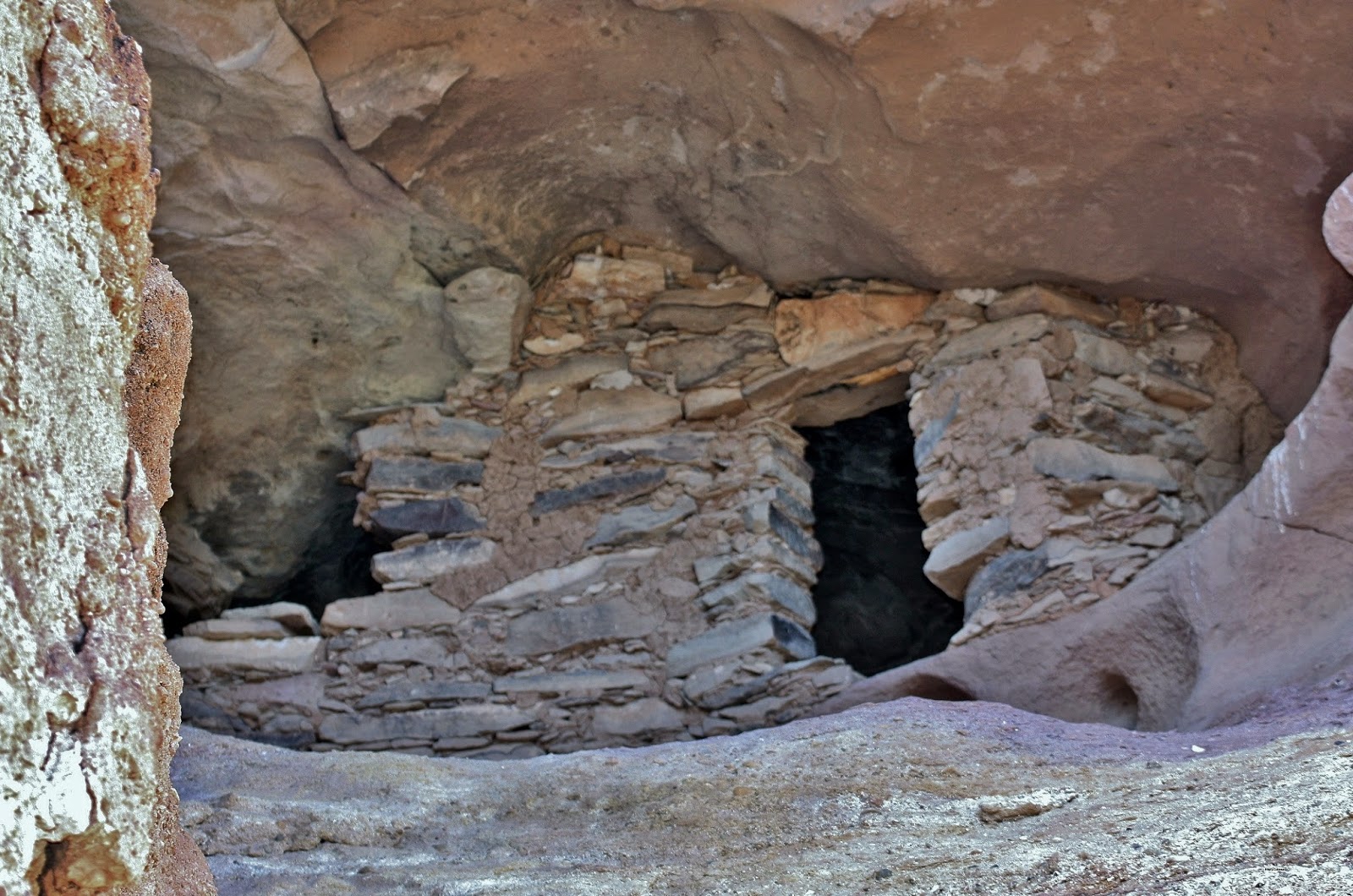 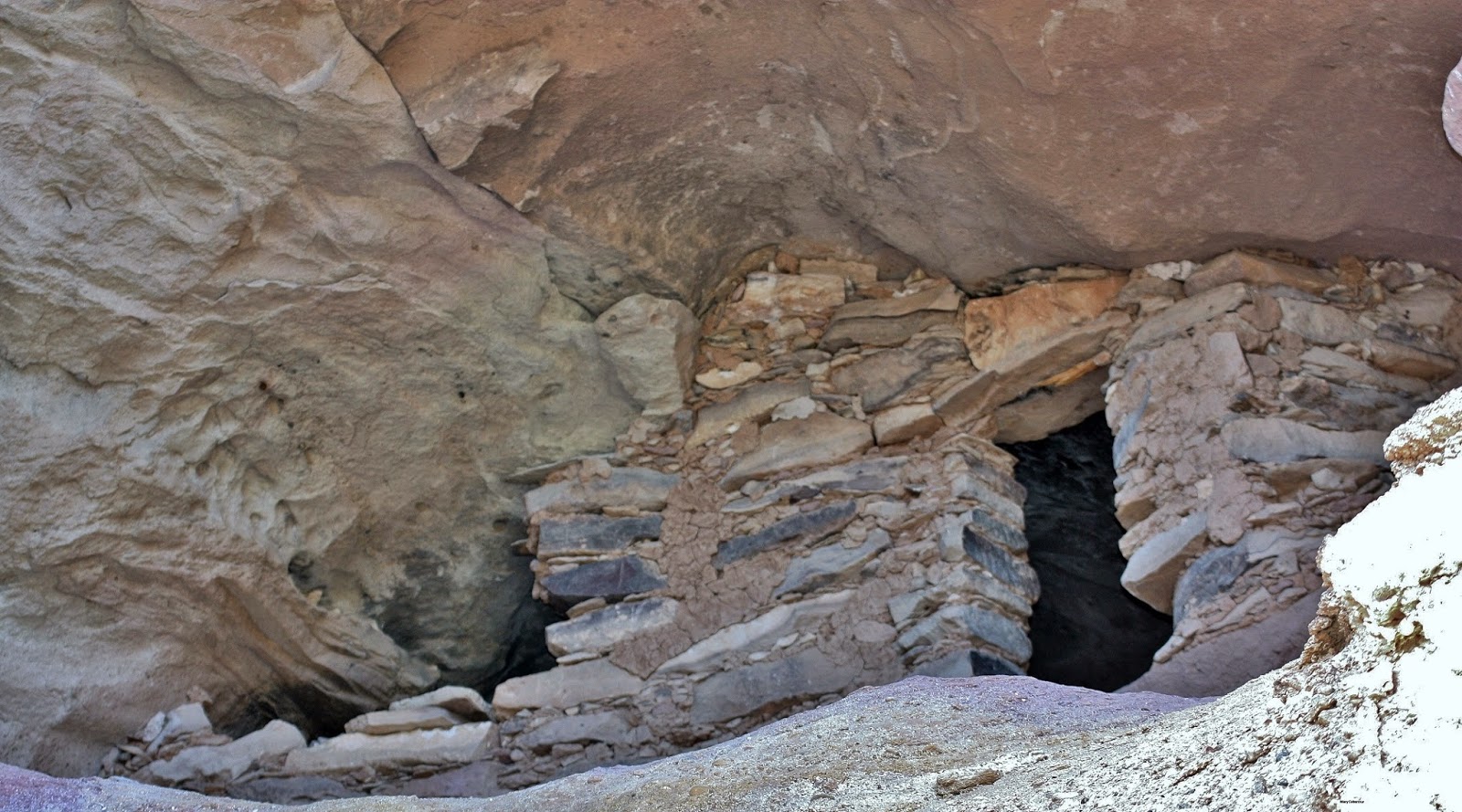 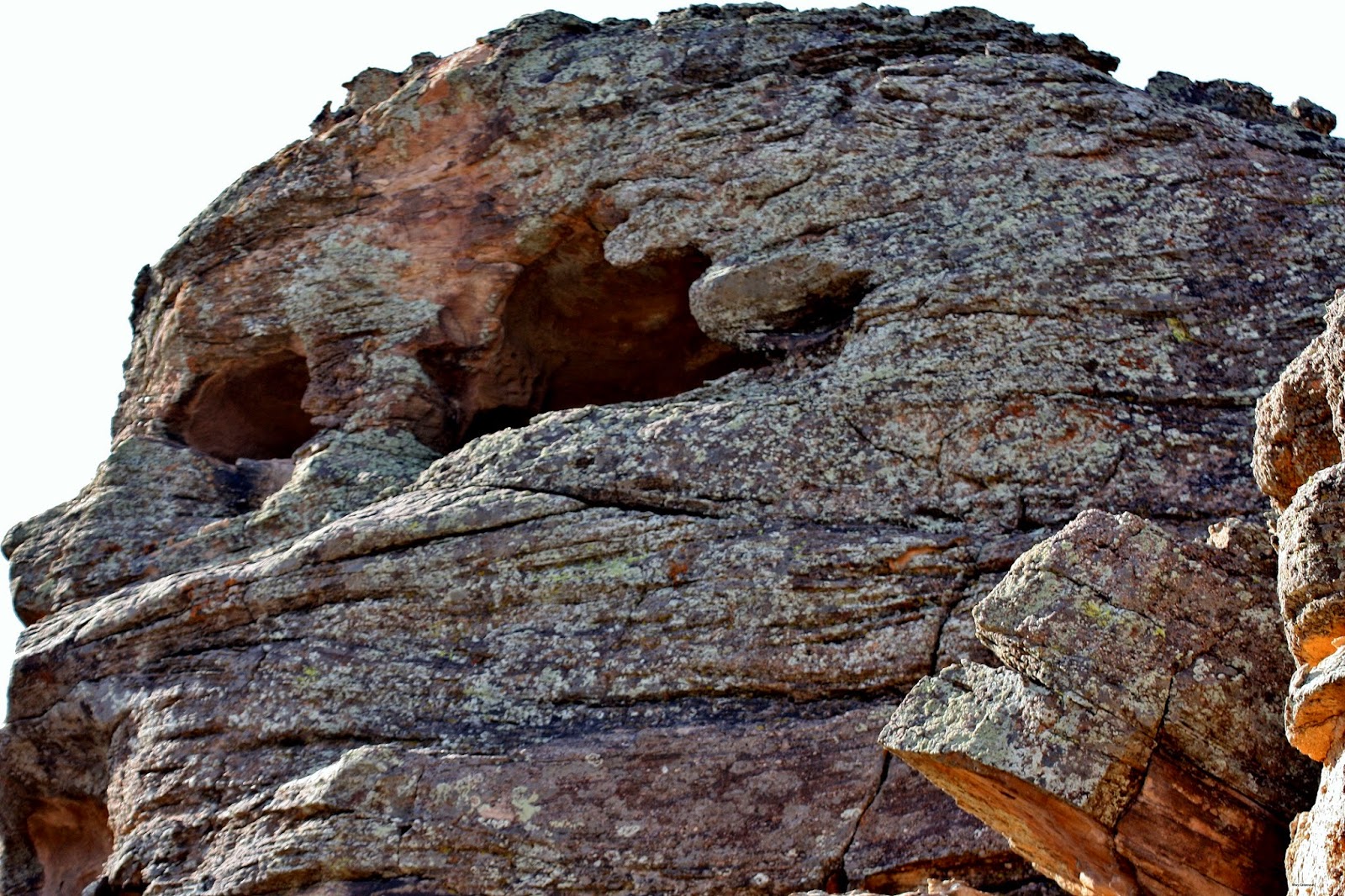 At 9.9 miles, Little Nancy Road (CR 368) is the same graded dirt/gravel road as CR 347, but only for about a mile.  It then turns to "unmaintained/undeveloped" road which leads to Bug Canyon, Lower Monument Canyon or Bull Canyon; we didn't travel to any of these, so can't tell you the true conditions of the roads in that area.  That's just going to have be another adventure, for another time. 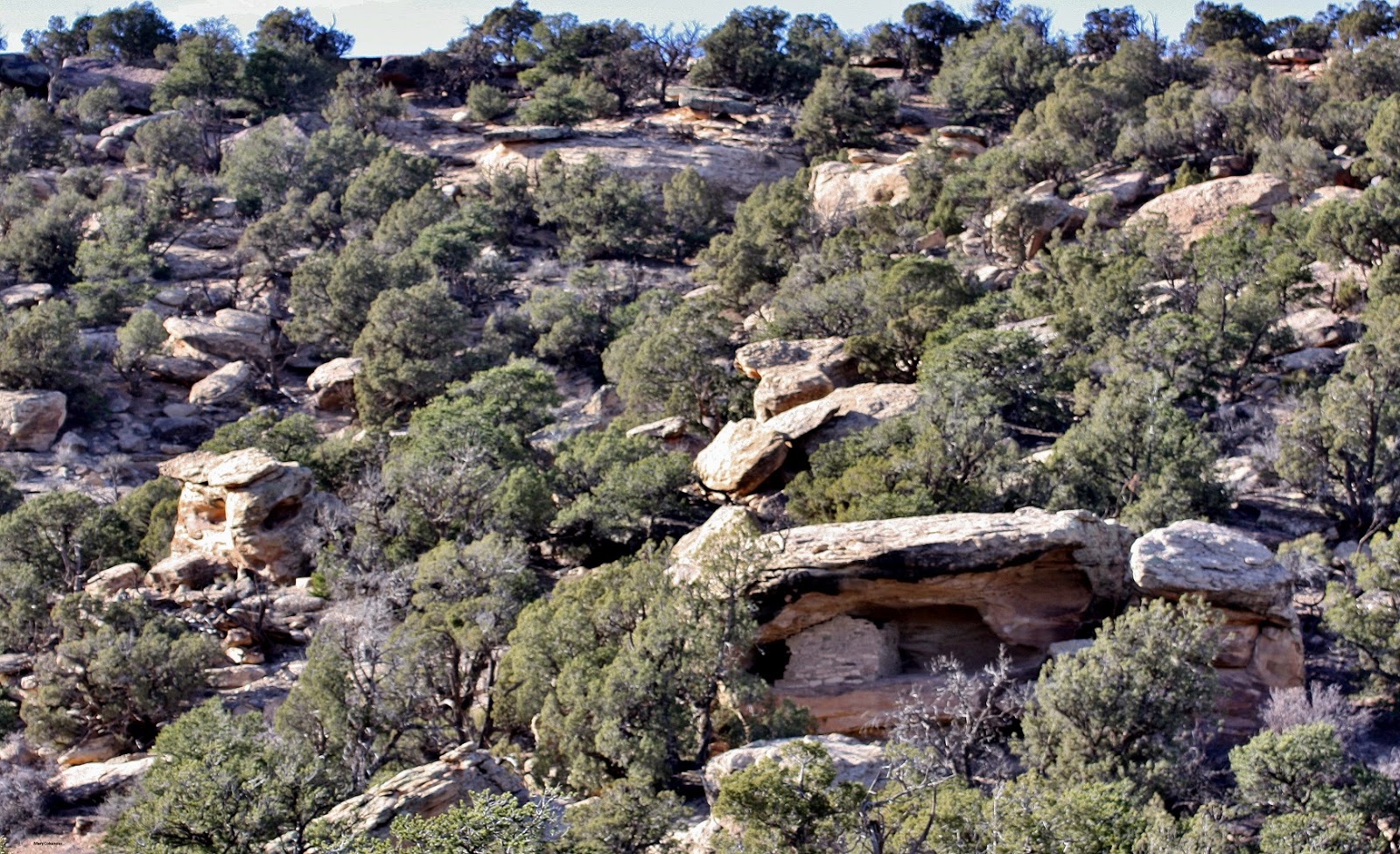 At 10.2 miles, almost level with the roof of our SUV, we found a granary sort of sitting within a huge boulder. 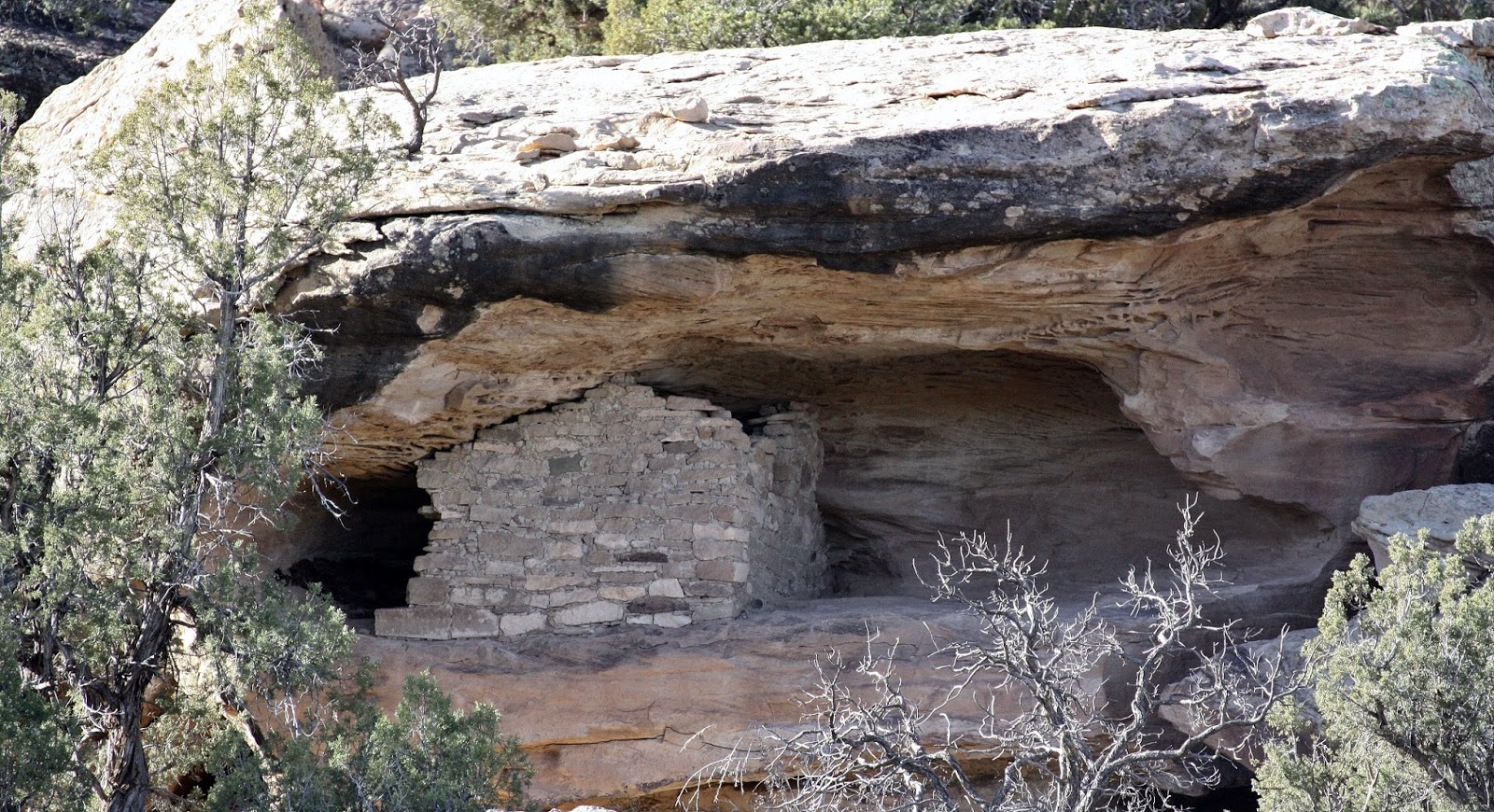 The canyons we passed by were filled with evergreen trees; unusual really as typically they're dry and rocky.  We saw Sleeping Ute Mountain in the distance and couldn't help but photograph it. 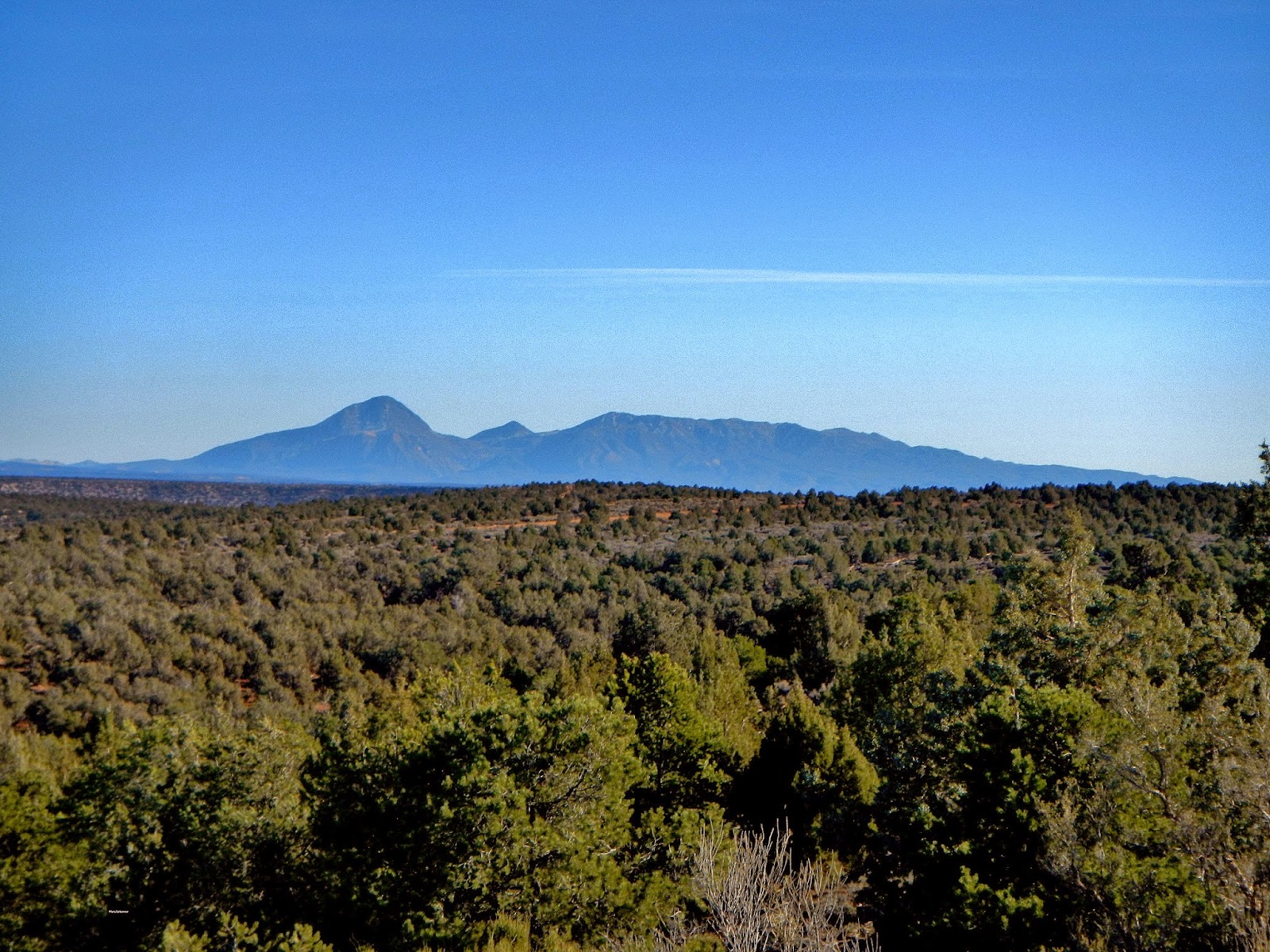 We began to see "teepees" in the distance and wondered if they were simply on a homestead, or had we reached the location of Open Sky Wilderness. At 13.8 miles we found the entrance to Open Sky, and there were quite a few vehicles parked; the landscape was beautiful, so no wonder they chose to have the camp there. 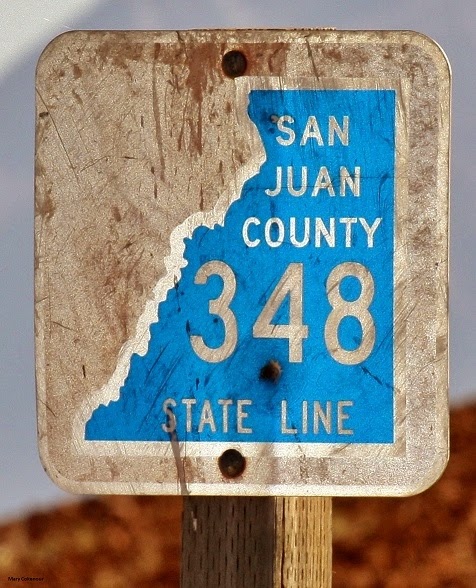 At 16 miles we began to see farmland and knew we were getting close to Colorado; it's very similar to leaving Upper Monument Canyon.  At 19.2 miles we ended our journey at the State Line (CR 348); we immediately recognized the buildings in the area and followed the same route back to Dove Creek, as we would have from Upper Monument Canyon. (see second map up above).

Whether you're a local needing to get away from it all for awhile; or a visitor looking for a peaceful, scenic drive; Bug Point (CR 347) is your journey to Zen.  In keeping with the theme of this post...Namaste.