1880s, the Denver and Rio Grande railroad was busy in Grand County, Utah as it delivered supplies, transported livestock and shipped out fuels from wells. Cisco became one of the major stops on the railroad; providing water for the steam engines and relaxation for passengers in the saloon. As the 19th century drew closer to its end, more work crews and travelers came through Cisco and required more amenities: stores, hotels and restaurants sprang up to accommodate. In the nearby Book Cliffs (north of Interstate 70), cattle ranchers and sheep herders began using Cisco as a livestock and provision center. By the turn of the 20th century, over 100,000 sheep were sheared in Cisco before being shipped to markets.

In 1924, oil and natural gas were found and the wells were popping up all around Cisco which became the largest provider of these fuels in Utah.  In the 1940s, over 200 people called Cisco home, and it was assigned its own US Postal Code, 84515.  In the 1950s, the railroad switched to diesel engines which meant water stops were no longer needed for the old coal engines.  It looked like Cisco was about to join the ranks of ghost towns until uranium and vanadium were found; mining kept the town alive, but only for a short while.  In the 1960s, the mines began closing down when the dangers of uranium were discovered; in the 1970s, construction of Interstate 70 bypassed the town.  Like Thompson Springs, another ghost town in Grand County, the bottom fell out of Cisco, but to such an extent that the residents moved away and left everything behind.   Since 2005, new oil wells have been dug occasionally, but the town could not be revived.

While considered a ghost town, it lives on in many ways; Cisco is still served by the Union Pacific Railroad where a rail siding remains in use; The California Zephyr passenger train passes through, but is not a scheduled stop. During the summer months, whitewater river rafters use Cisco as a landing site, mainly for a trip through Westwater Canyon, and the Kokopelli mountain bike trail passes through Cisco.  A fiber switch substation was installed at Cisco by Emery Telecom, so DSL is available through this substation.  Scenes from the movies, "Vanishing Point" in 1971, "Thelma and Louise" in 1991 and "Don't Come Knocking" in 2005 were filmed in Cisco. 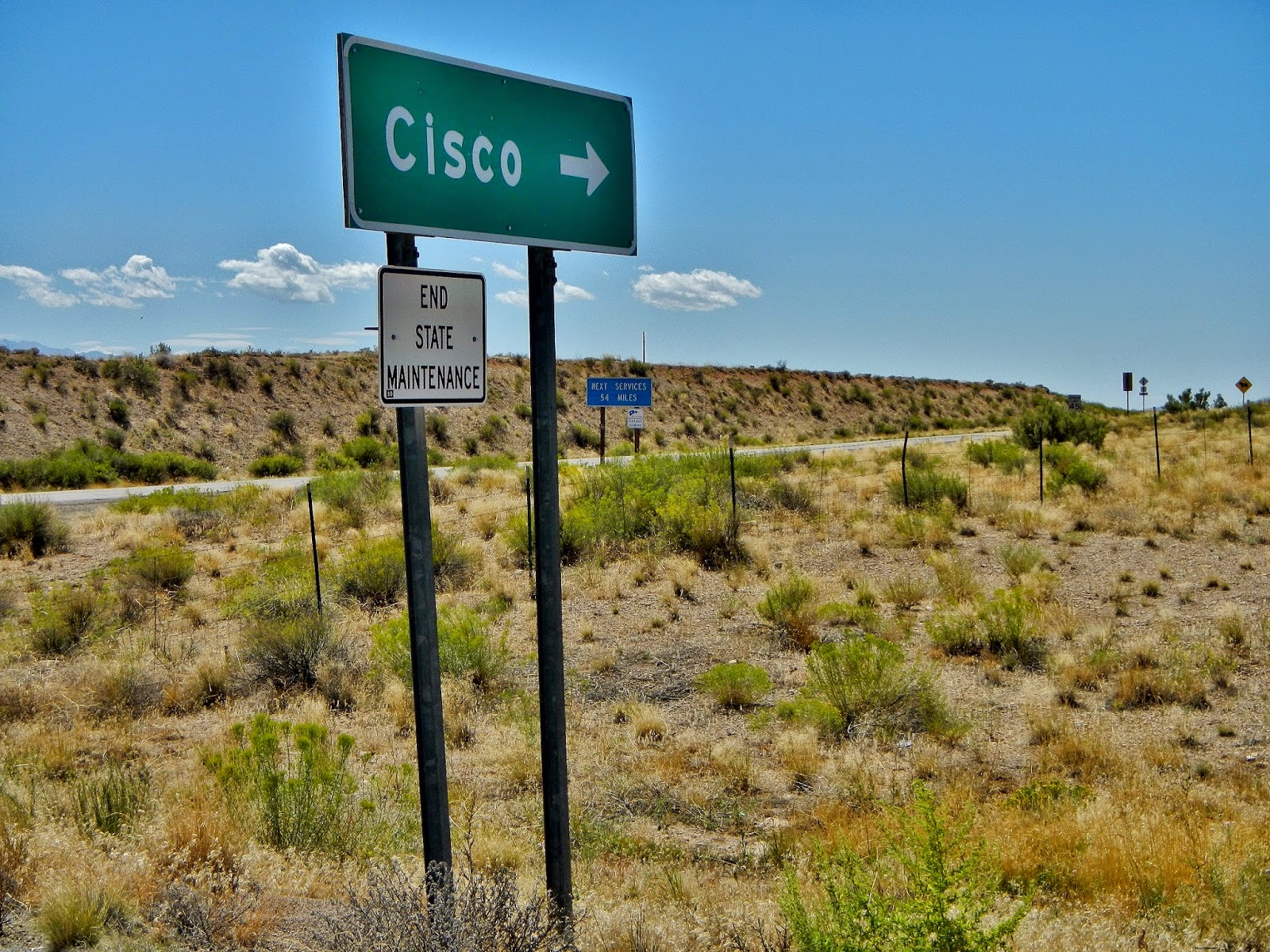 How to find Cisco?  If you're traveling up from Moab, drive along scenic highway Route 128 parallel to the Colorado River. Plan on at least a one and a half to two hour drive, as there is so much beautiful scenery to view, such as La Sal Loop Road, Fisher Towers and Castle Valley.  If coming off of Interstate 70, take exits 204 or 214 and follow the signs to Route 128/Cisco. 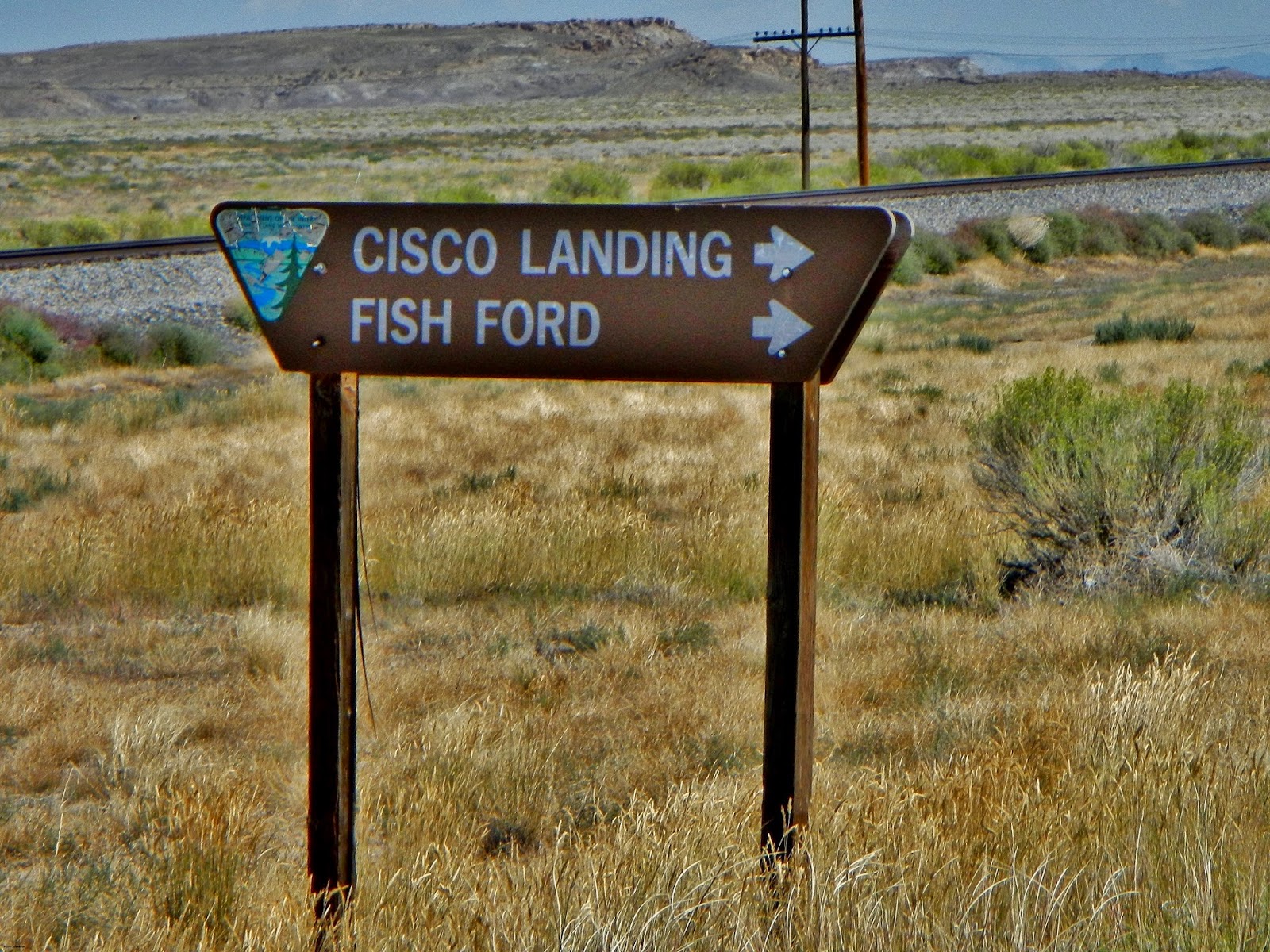 While driving closer to Cisco, you will notice how the landscape changes to flat, sage brush covered desolation; a perfect setting for a southwestern ghost town.  You'll see the town before the signs tell you that you've arrived; obviously old, run down. abused by the elements and vandals.


Featured in the film, "Vanishing Point" is the old gas station.  In the 1950s, it was owned by Ray and Mabel Scott and was the last surviving business before Cisco "closed down" altogether.  There is a legend concerning this very gas station; how true it is I cannot tell you, as I can find no records verifying the account. However, when a long haired biker stopped for gas and took off without paying, the owner shot him and was jailed. His wife, a cantankerous woman, would only serve those whom she felt like serving, with the door kept closed and customers having to knock to get in. If she opened the door, a big dog would often bite the ankle of the customer; if the potential customer kicked the dog, she would refuse to serve them. However, if they stayed calm, they would be allowed to purchase a meal. Again, I can find no information verifying if this was the Scotts, another couple, or if the incident did, in fact, occur at all. 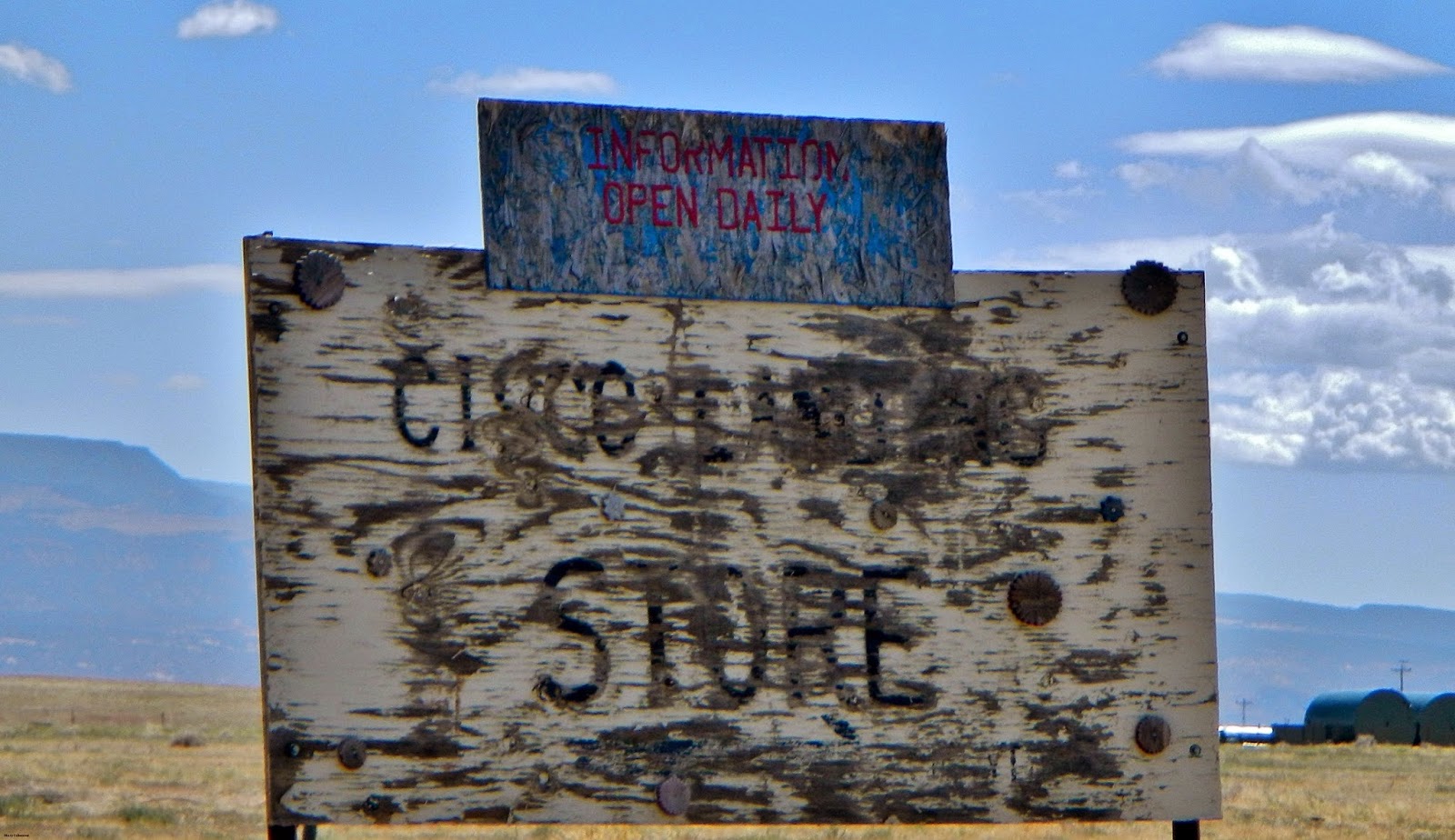 The first main street leads towards the country store; fenced in, but interesting to look at, especially the outdoor restroom. 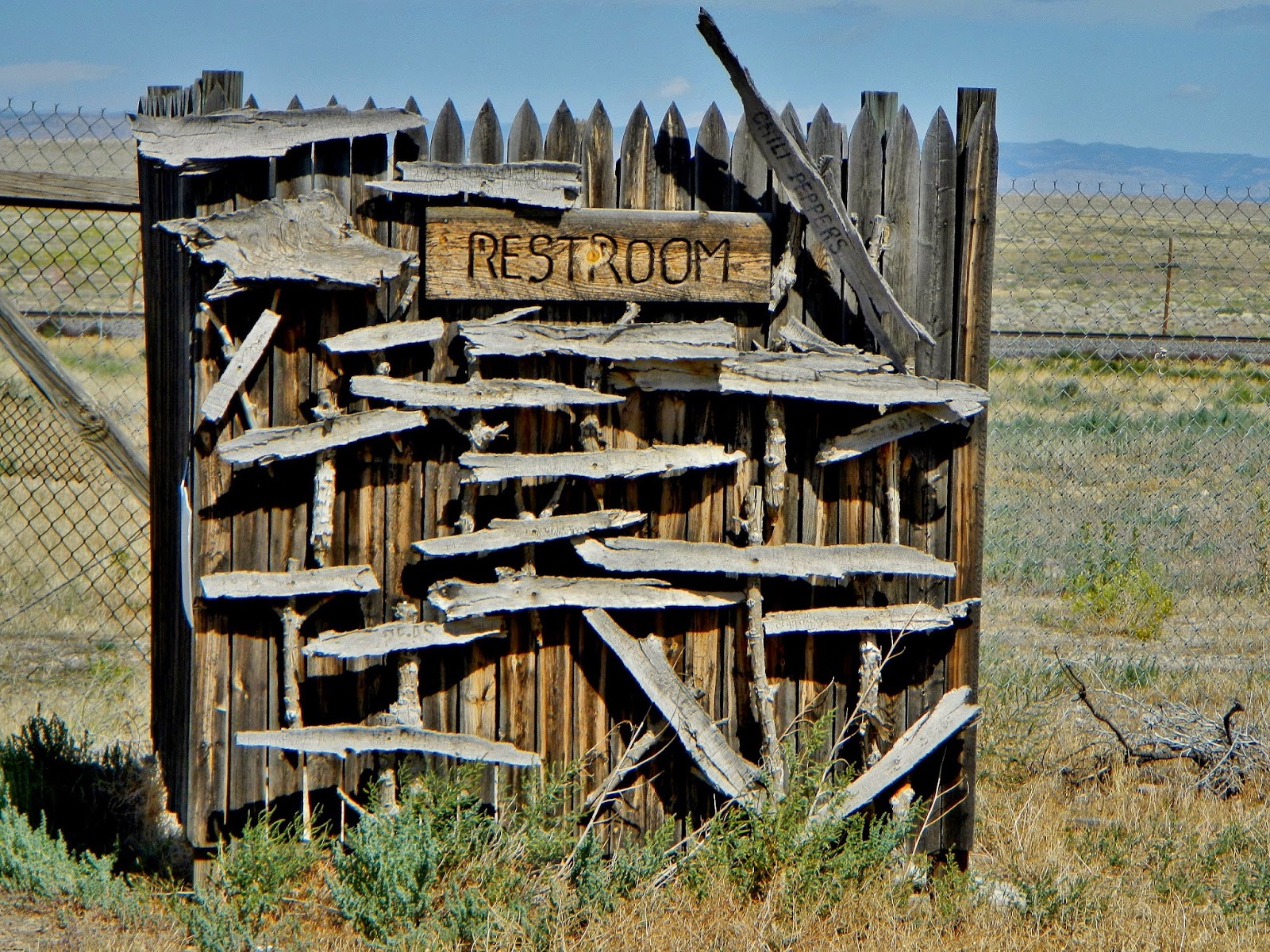 Every street has buildings covered with "private property", "no trespassing" signs and we respected those signs.  At one end of town, we discovered an oil well and this made us wonder if one of the trailer homes that looked fairly new belonged to a worker of the oil company or security guard.  There was not a human living soul about though, but plenty of pronghorn deer (antelope) and prairie dogs.  Oh, the town seems to have become a place where unwanted vehicles are dumped and forgotten about. 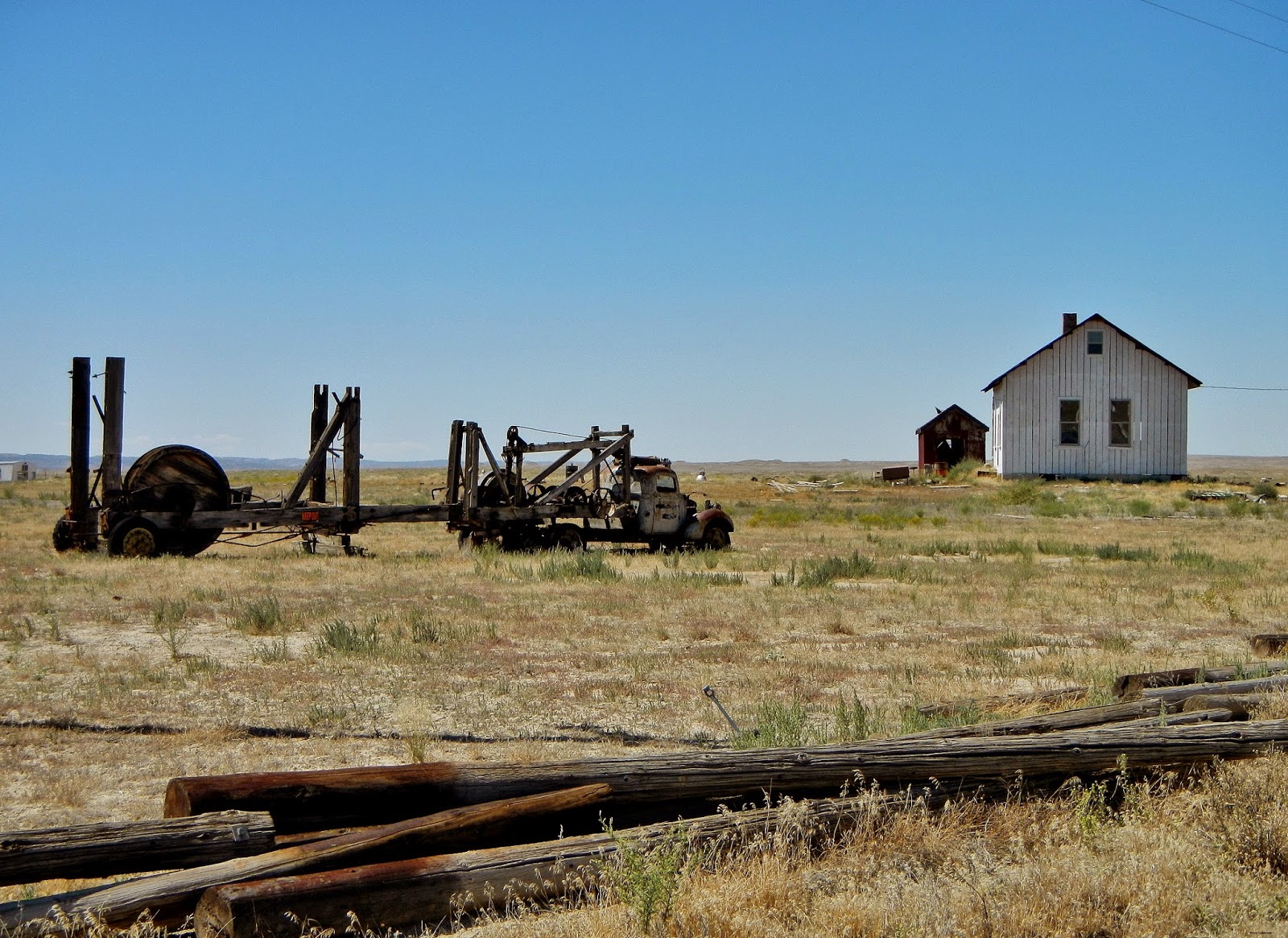 ...and finally, the post office which earned its very own zip code in the 1940s, but I highly doubt any mail is being delivered to 84515 any longer.

Vehicles with curious onlookers slowly drove through the town now and then; perhaps a visitors center is needed here?  Anyway, if you're interested in ghost towns, take a ride through Cisco; forgotten by time and its own residents.