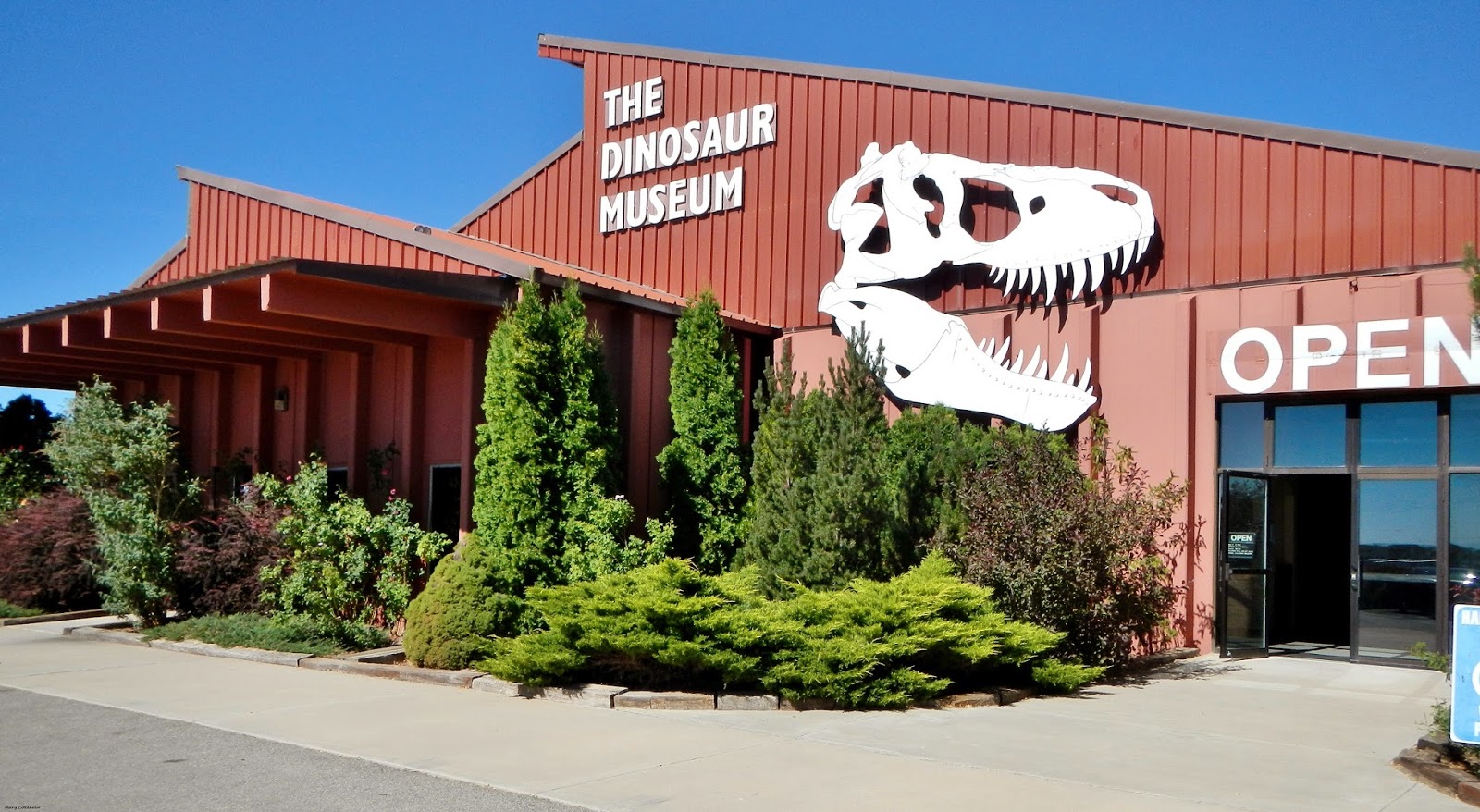 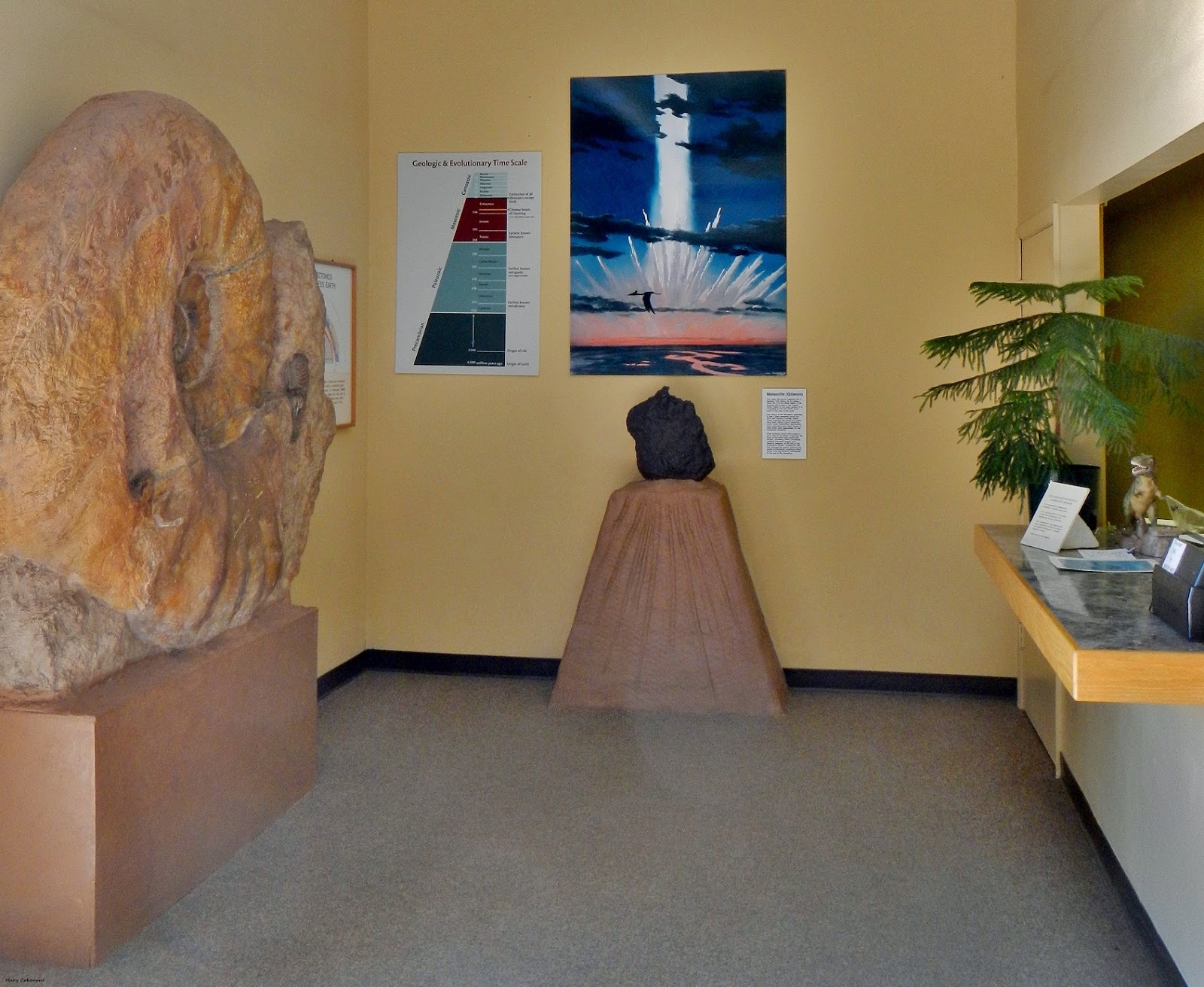 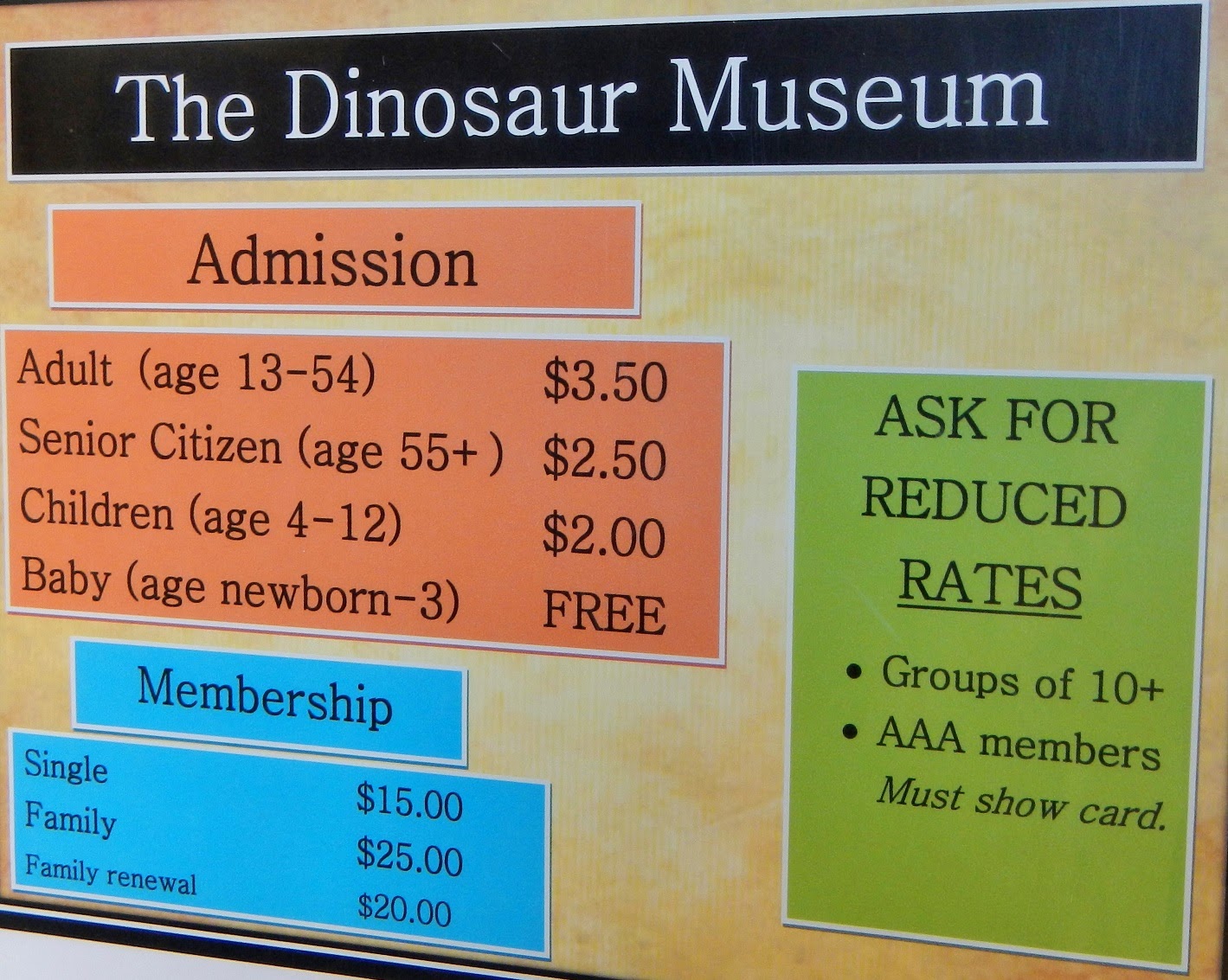 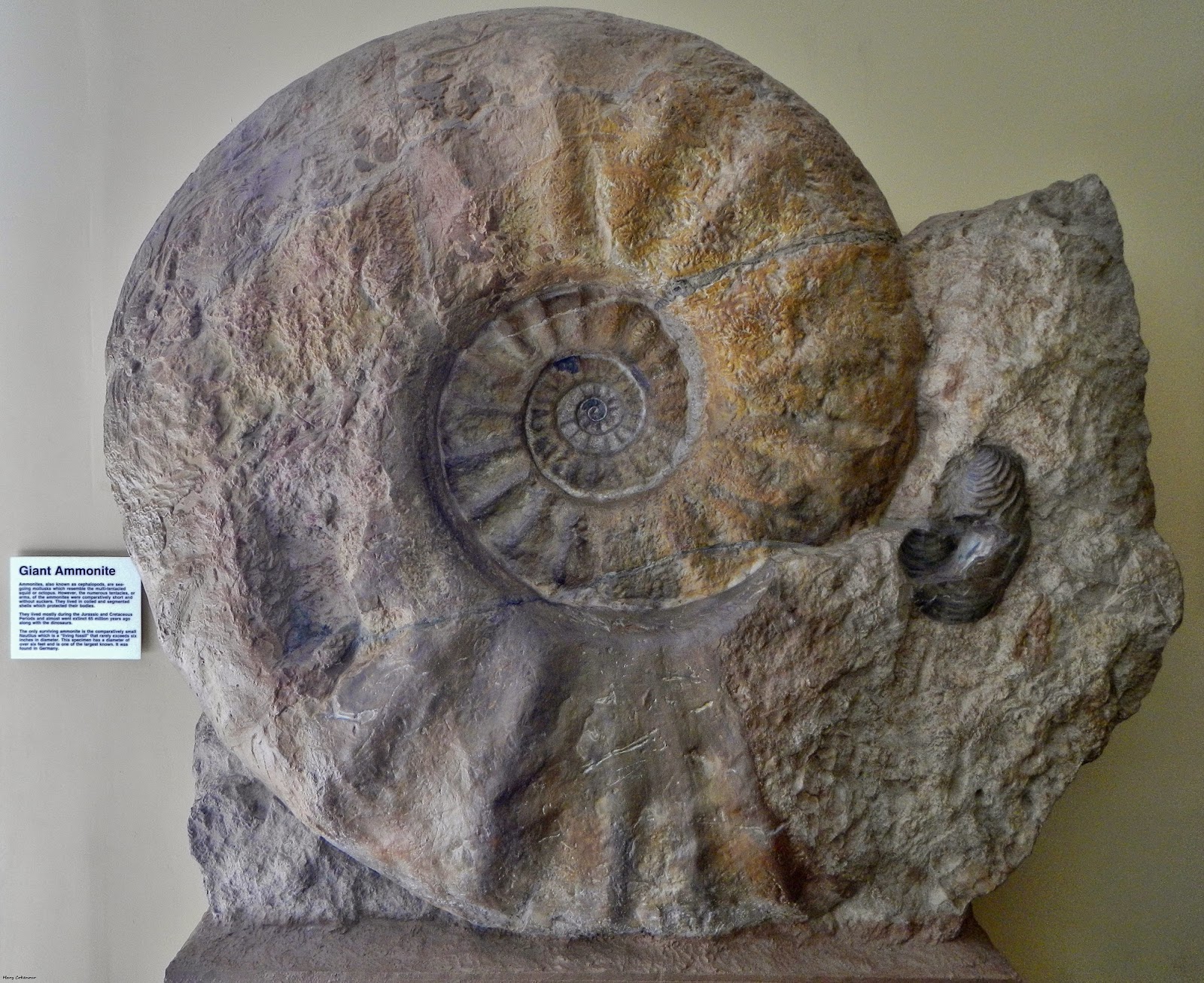 In the entry way is a cast of a Giant Ammonite; found in Germany, the original specimen is housed at The Natural History Museum in Munster, Germany.
Anyone who is fan of the British sci-fi series "Doctor Who" will instantly understand this next phrase, "It's bigger on the inside!"  Don't let the exterior of the museum building fool you; it might look small, but there are five large rooms housing magnificent recreations, castings, and actual skeletons of dinosaurs; and many, many display cases.  One room in particular is the newest exhibit, The Feathered Dinosaurs; and you won't believe this, but...wait for it...wait for it...the Raptors (remember them from the film, Jurassic Park) were actually feathered dinosaurs!
Lets take a visual tour through photos, but they do NOT do the actual exhibits justice at all. 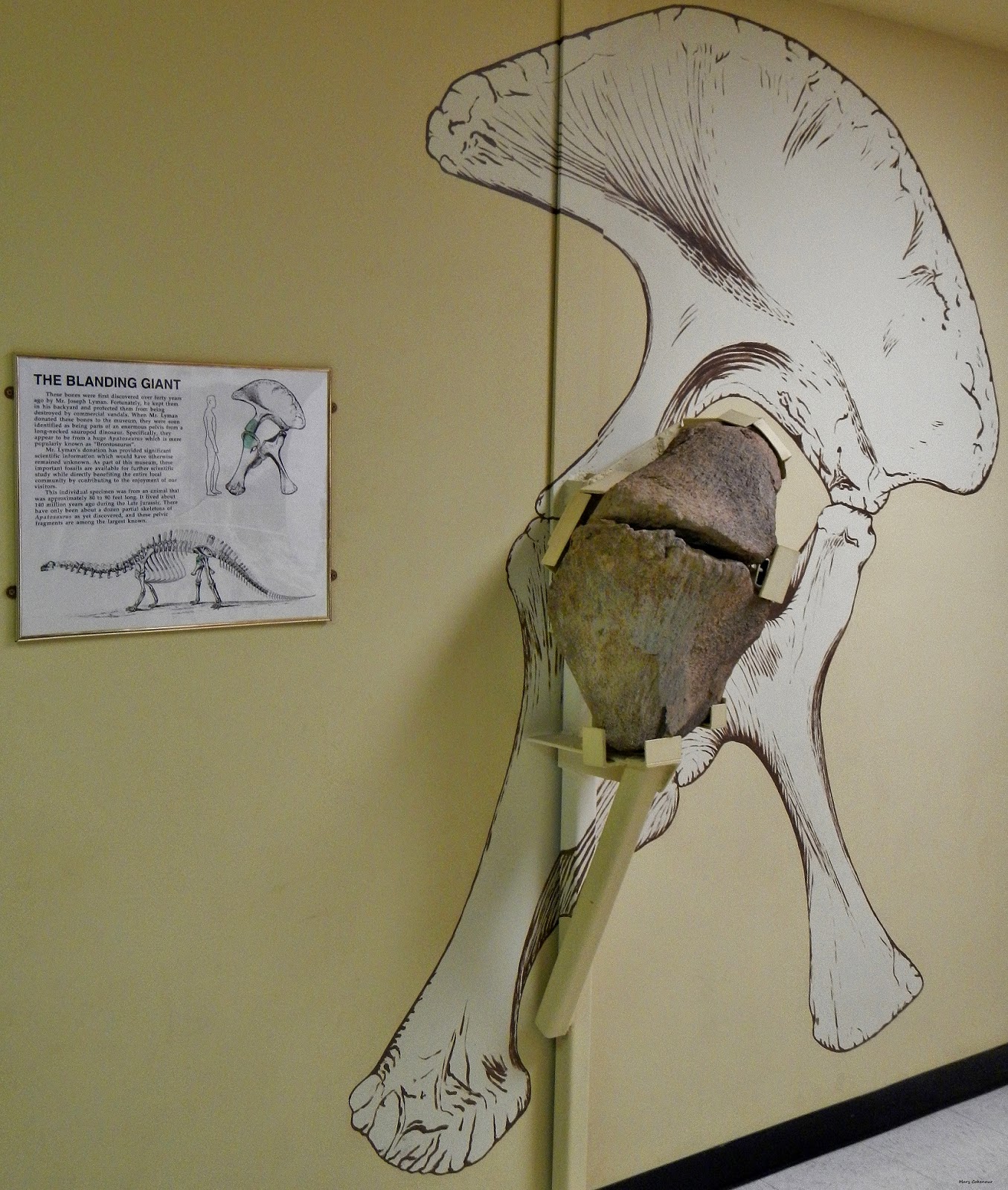 The Blanding Giant; 2 sections of a Brontosaurus leg are all that remain; they were decorations in the garden of Joseph Lyman.  Do more remain tucked away in other Blanding gardens?  If yes, are the residents willing to donate them to the Dinosaur Museum for safe keeping?

One room contains the story and evidence behind the "Feathered Dinosaurs - Correcting the Mistake"; proof that Raptors were part of this species of dinosaur.  This will lead to the Museum's newest exhibit, "The Feathered Dinosaurs" and you will be left speechless by the creatures you see in there.

Alright,here it comes...The Feathered Dinosaurs; don't be thinking that because I've posted photos that you do not need to come to the Museum....WRONG!!! The moment I laid my eyes on the Therizinosaurus, I was floored; it has to be one of the most absolutely, beautifully, awesome creatures from the prehistoric age. 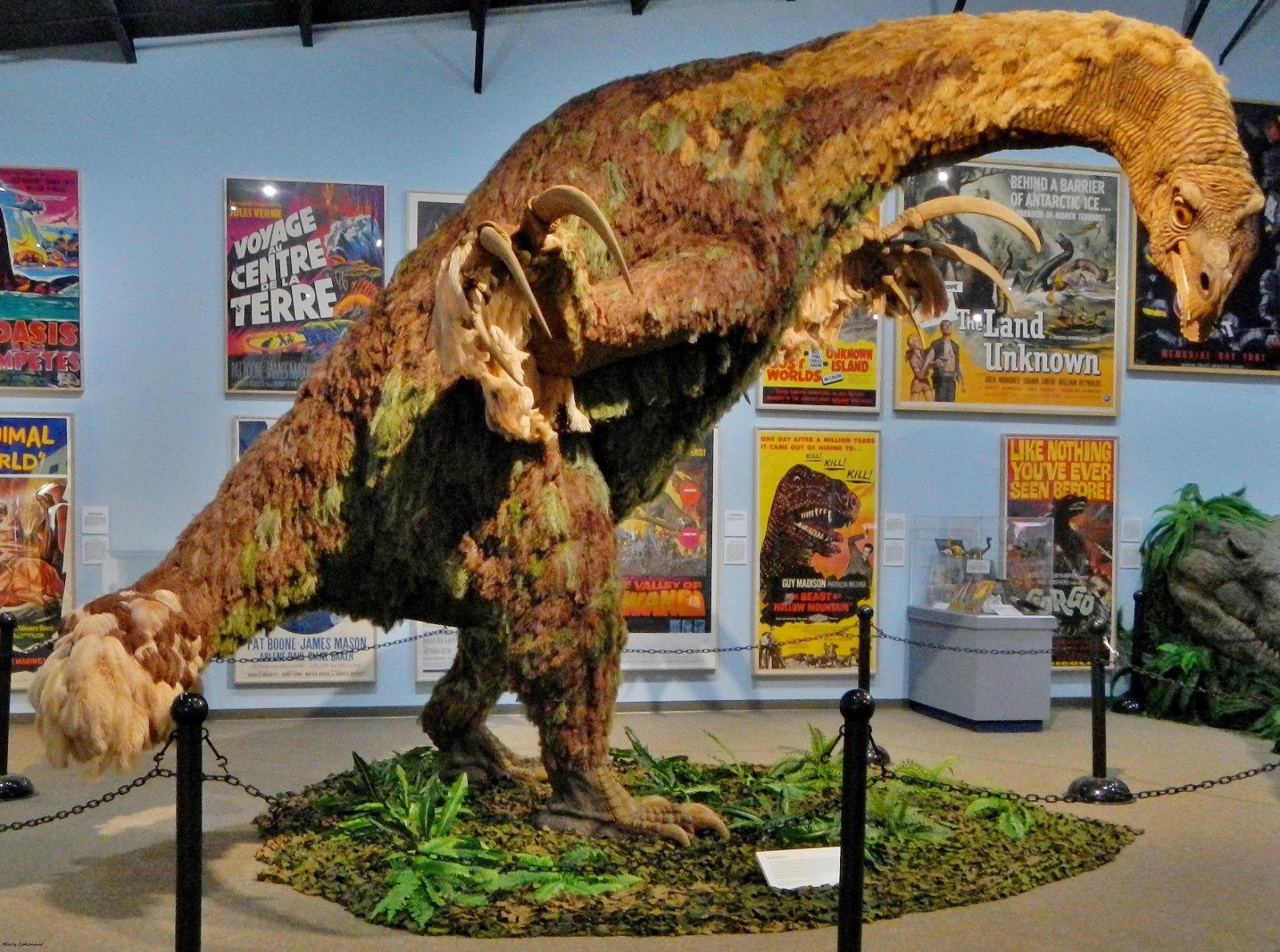 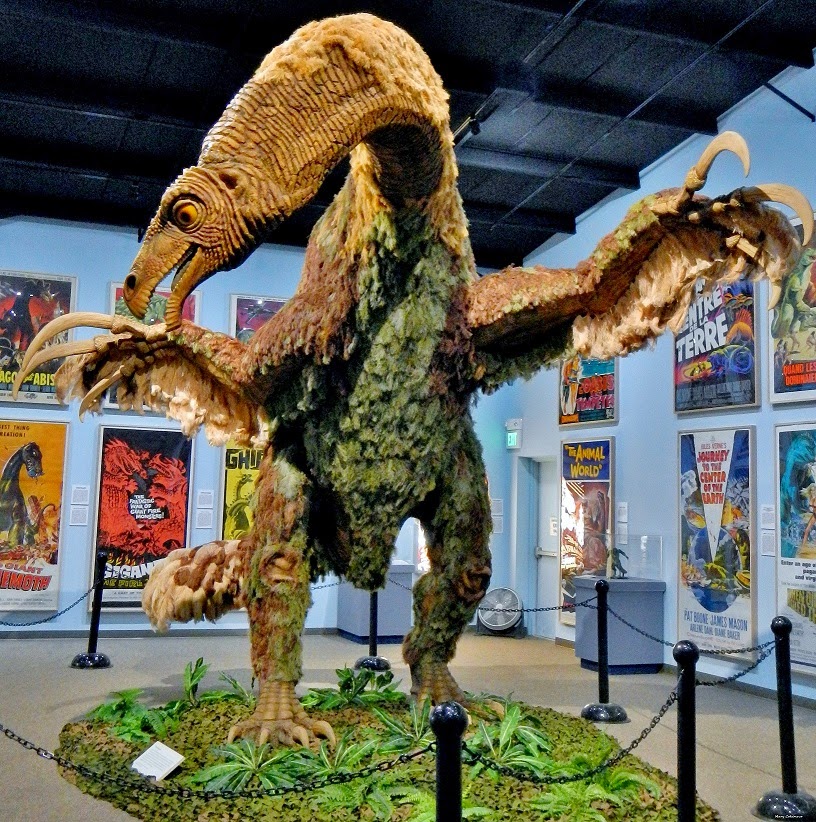 The next room contains a dinosaur that has been my very favorite since childhood, the Edmontosaurus aka Duckbilled Dinosaur.  This specimen was mummified, so a good amount of skin is still attached giving paleontologists an incite to the texture and structure of its skin. 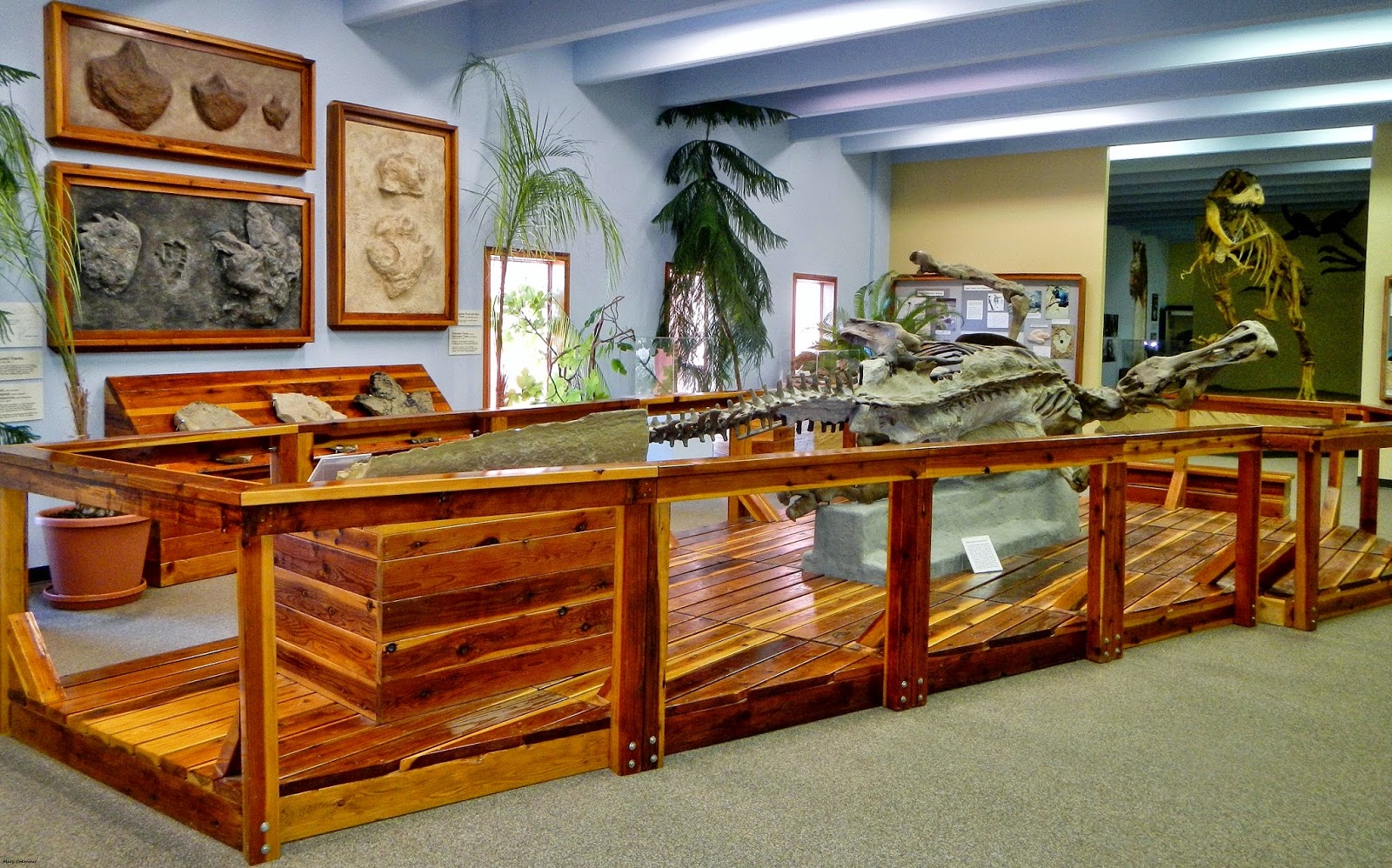 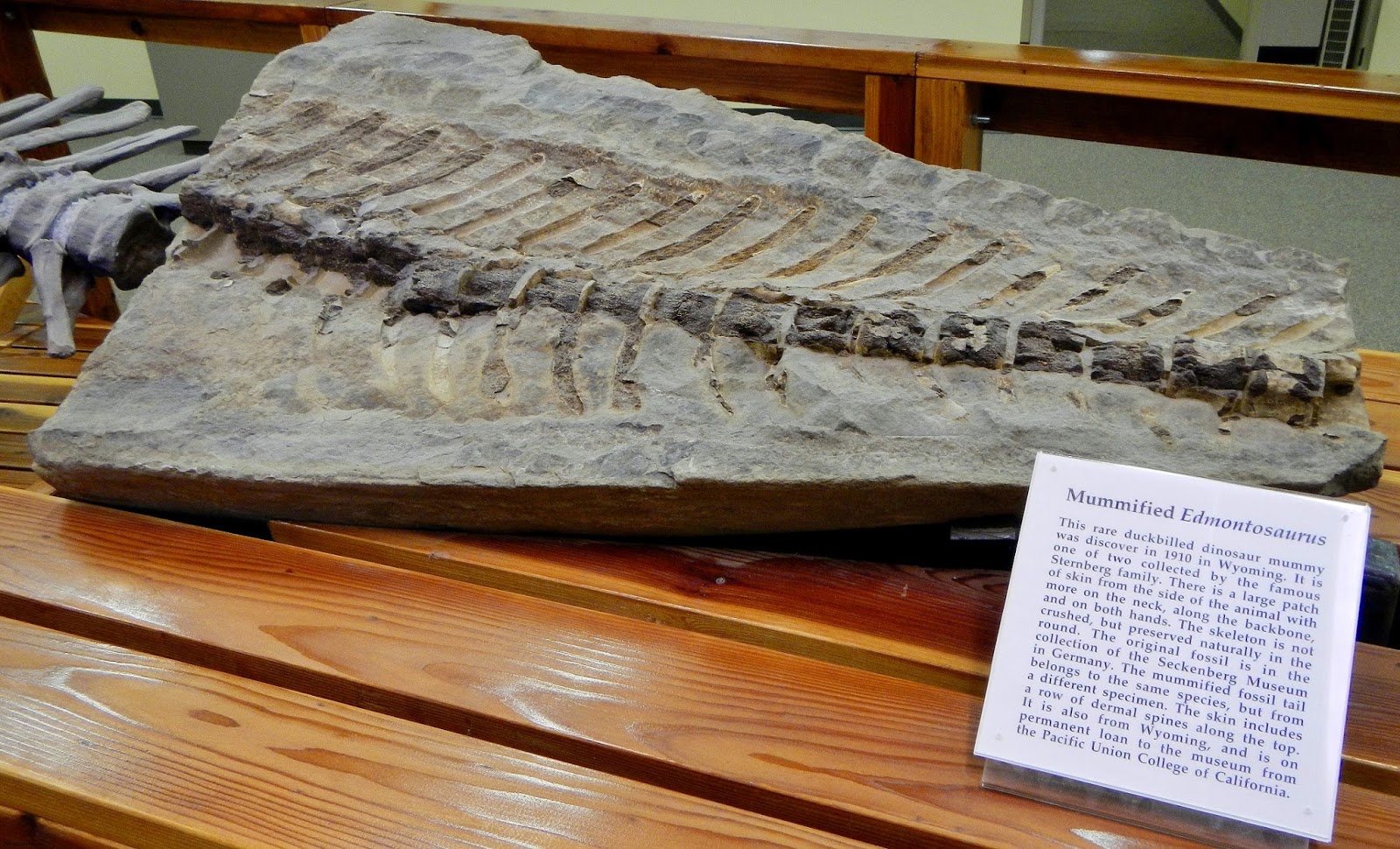 There are also tracks, fossils and story boards of how many of the exhibits were found, dug out and transported. 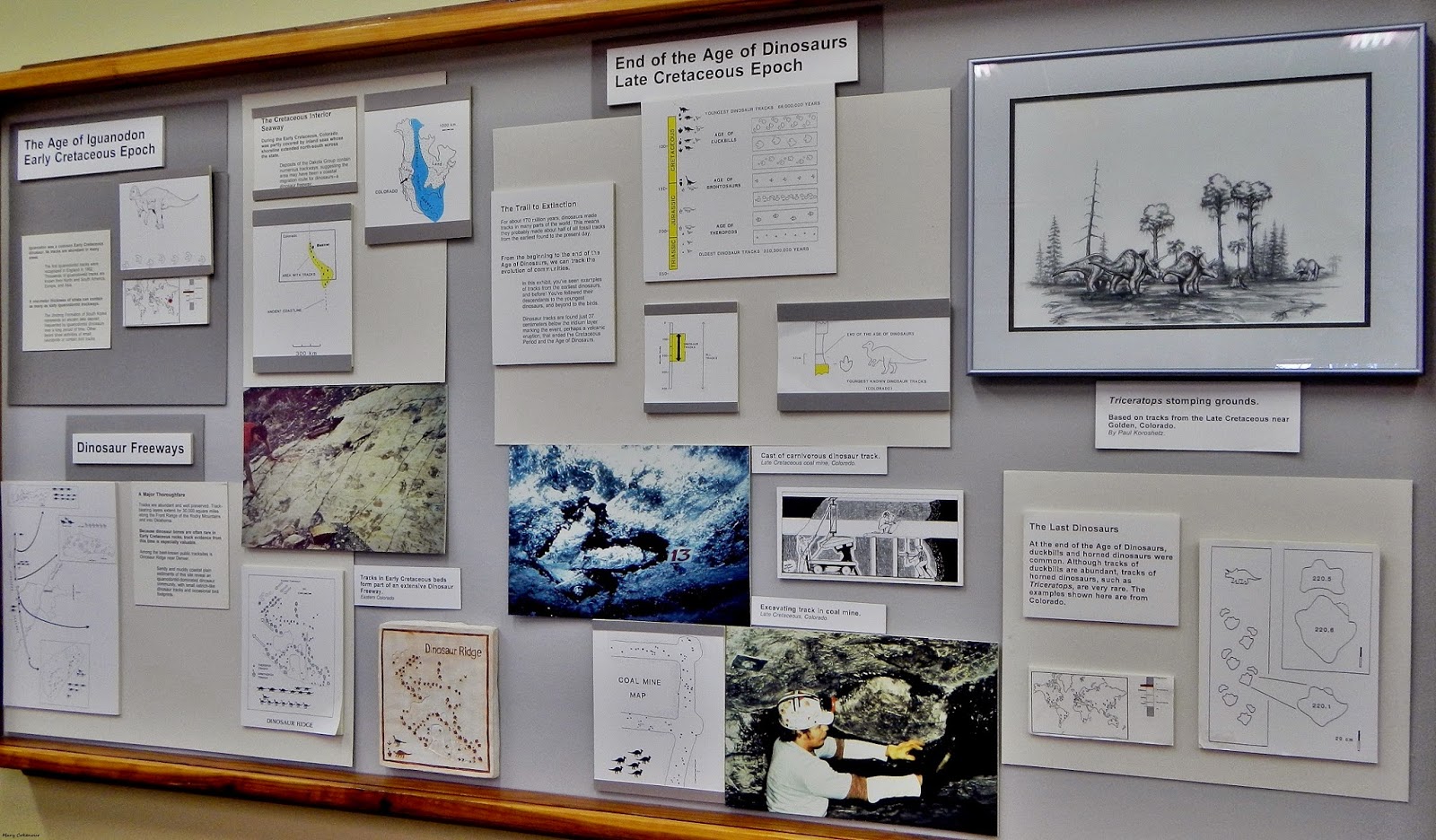 Throughout the entire facility are various display cases of fossils, bones, artwork and even how the dinosaur was used commercially to sell everyday products. 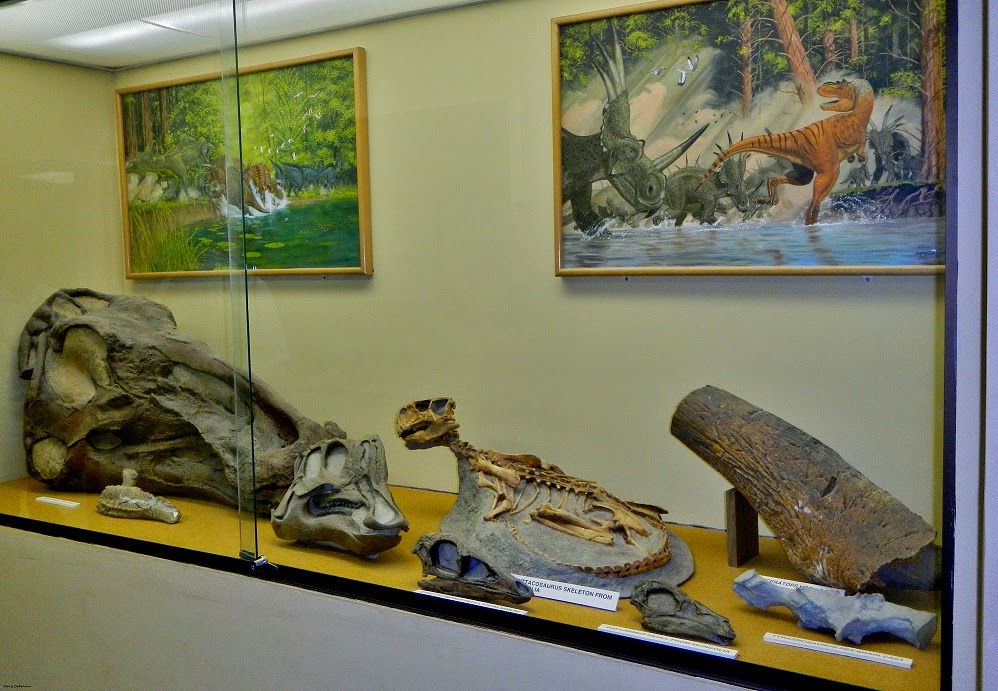 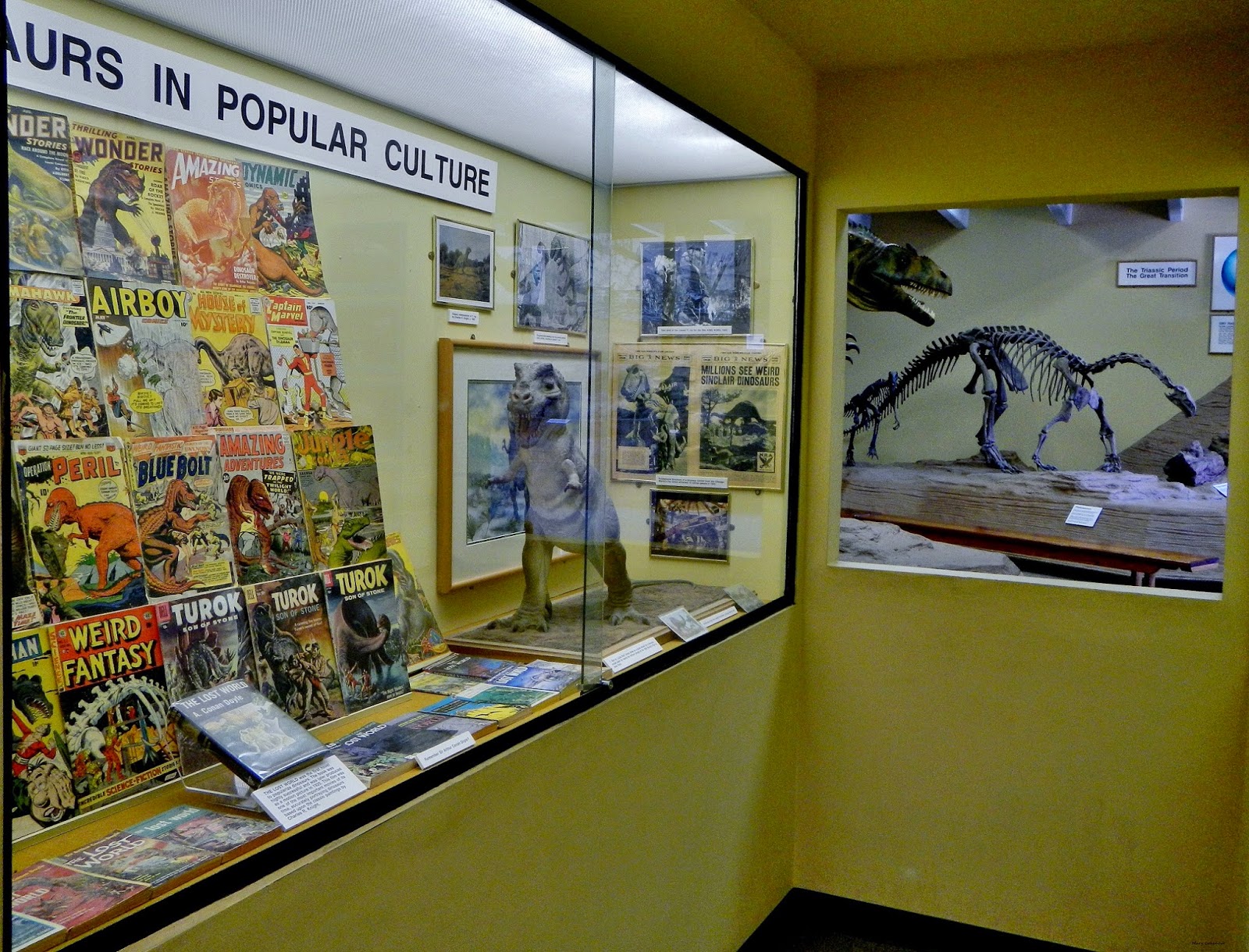 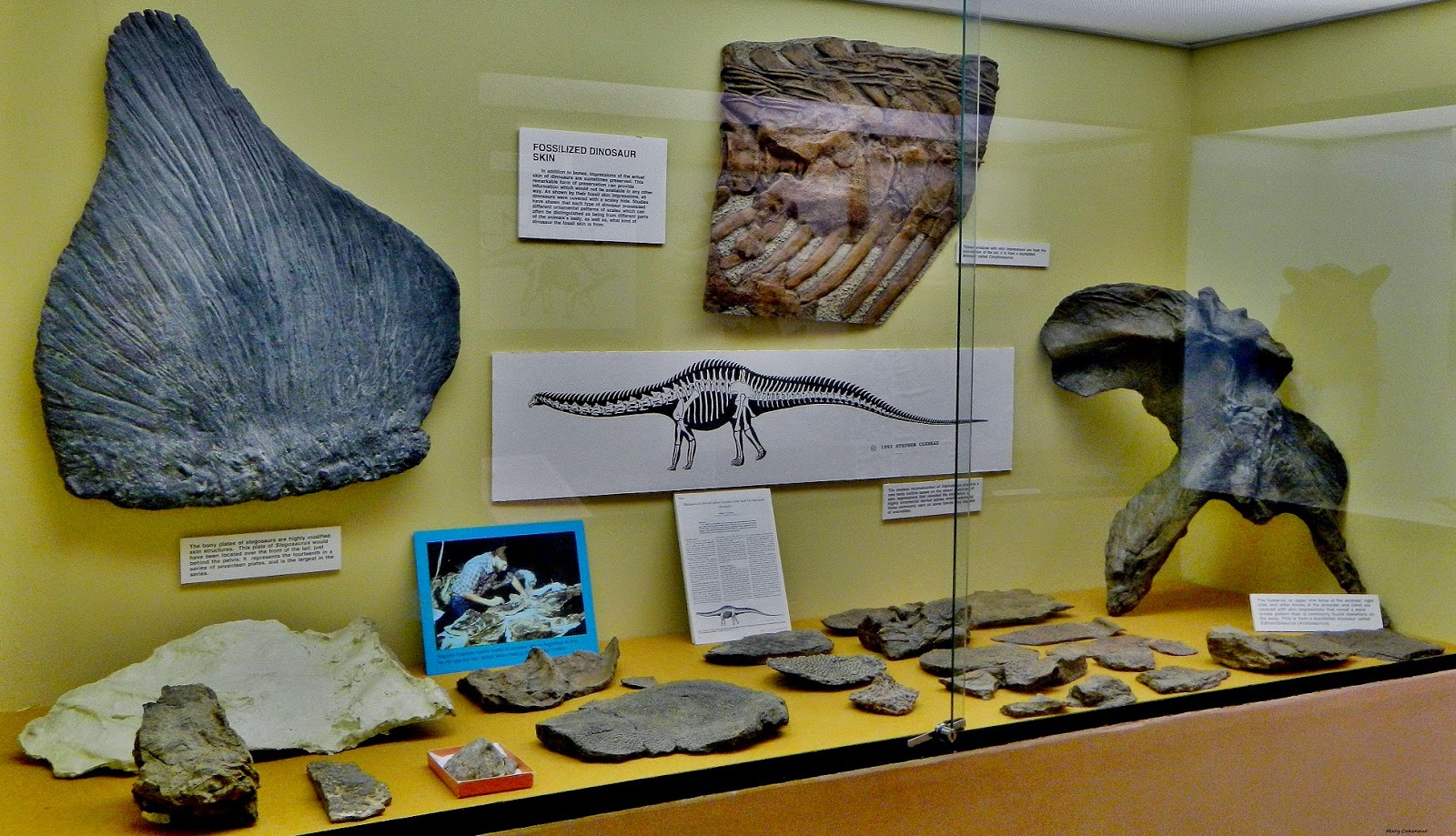 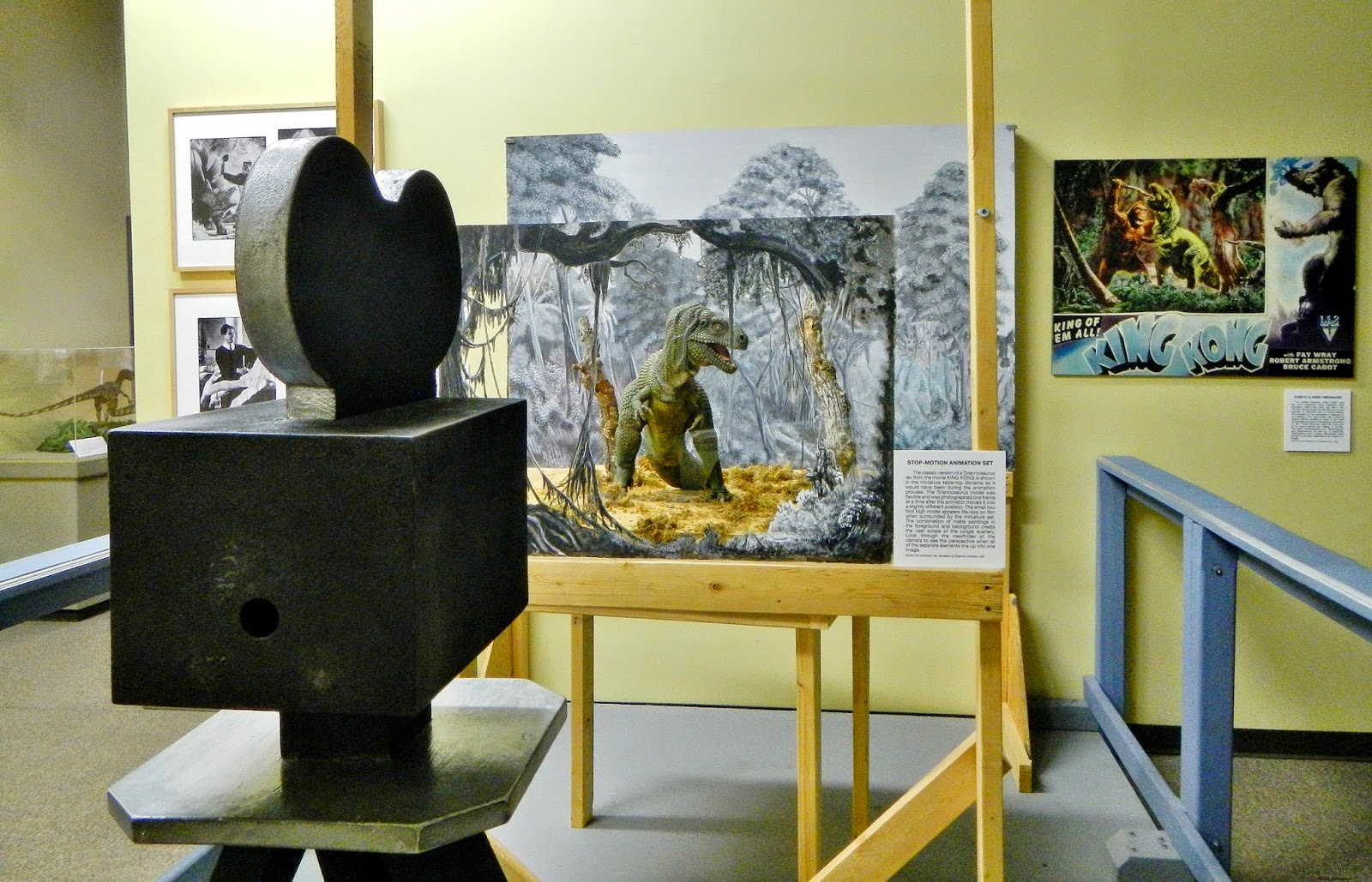 So, you think Hollywood has all the good stuff...not when it comes to dinosaurs.  How about the film setup for the original King Kong; including the model for the Brontosaurus.  They even have King Kong himself from the remake done by Peter Jackson. 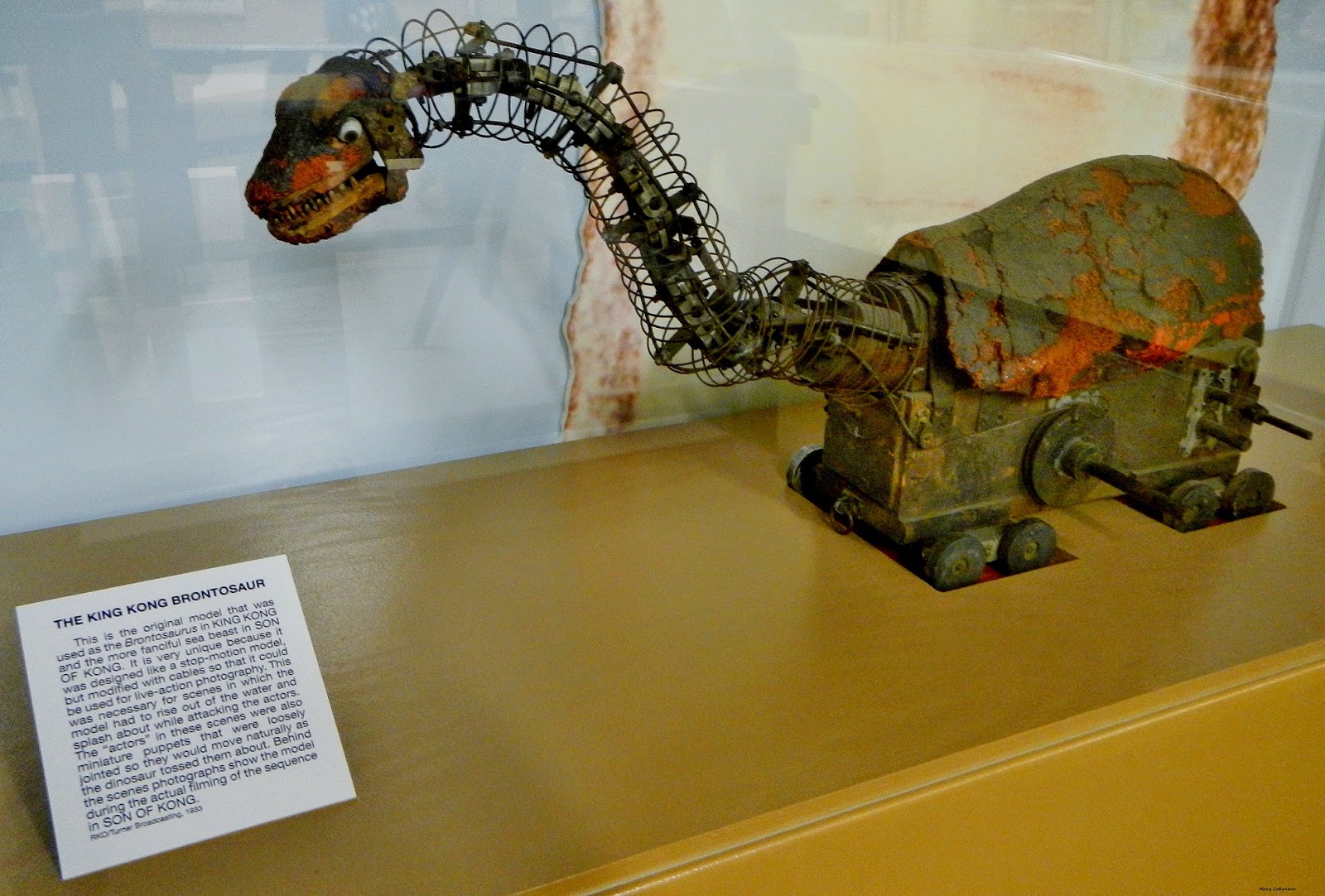 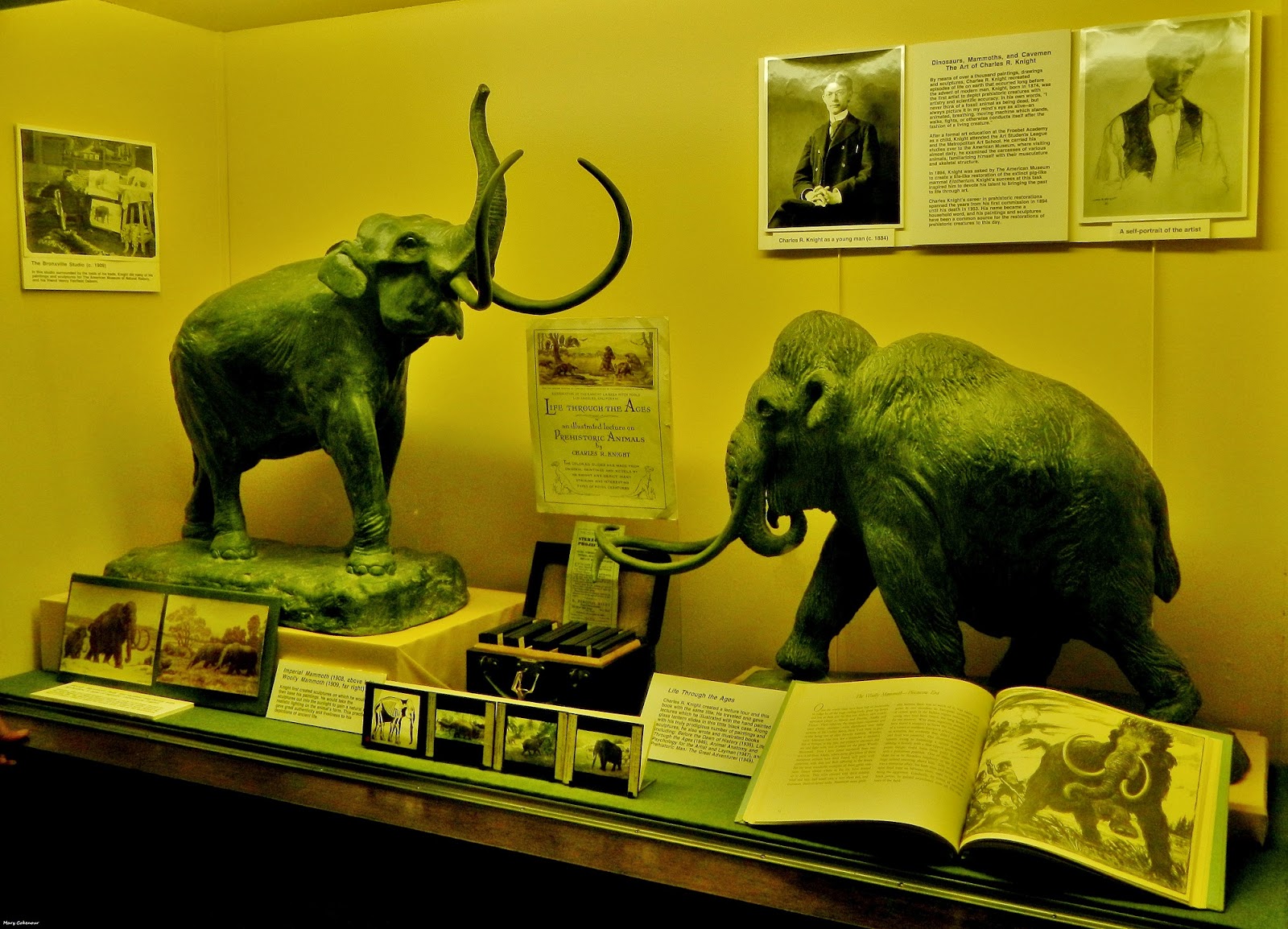 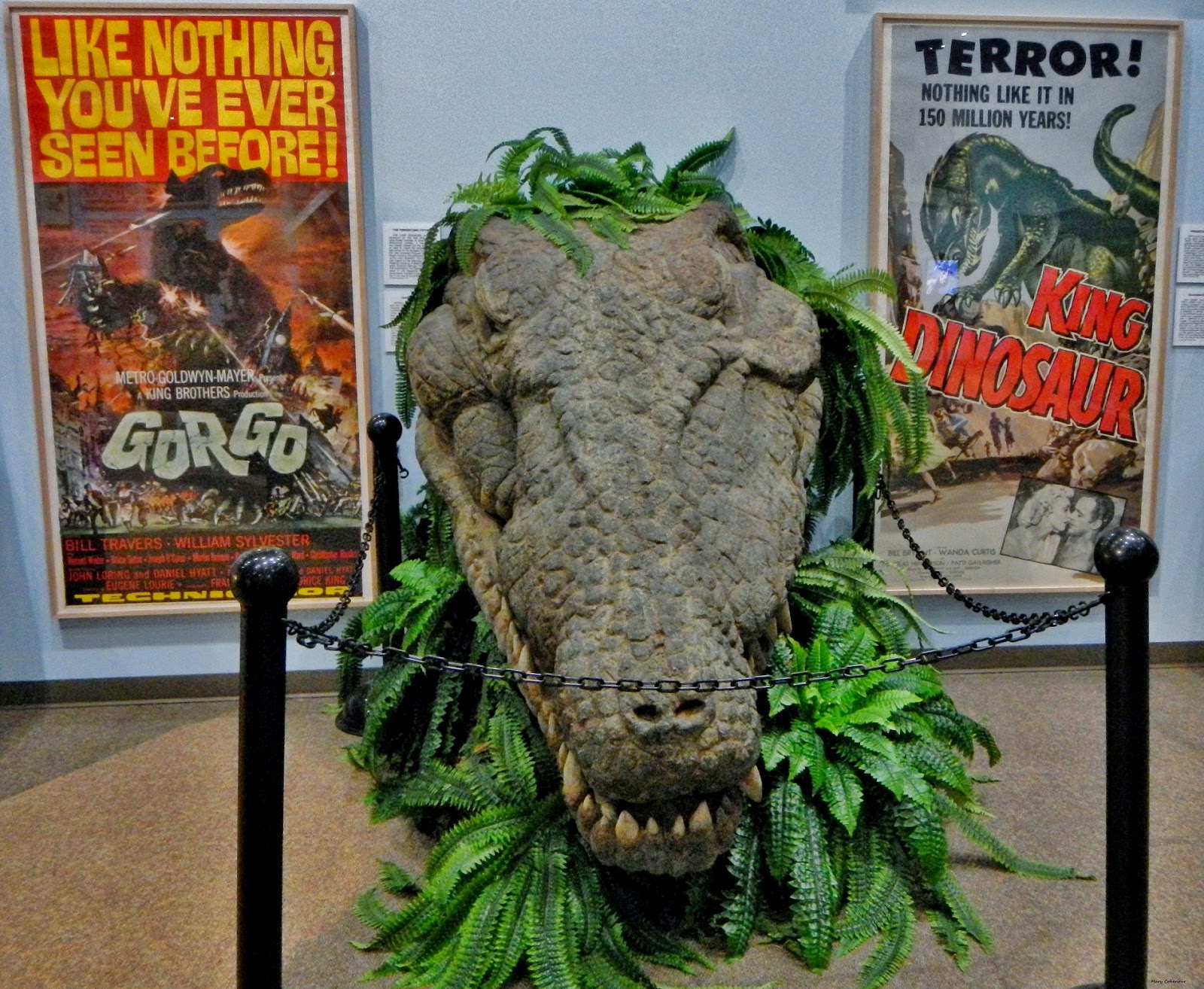 See that poster for "Gorgo", that was one of my very favorite movies when I was a child.  In fact, I've probably seen almost every movie that is on the posters at the Museum.  Big dinosaur movie watcher am I. 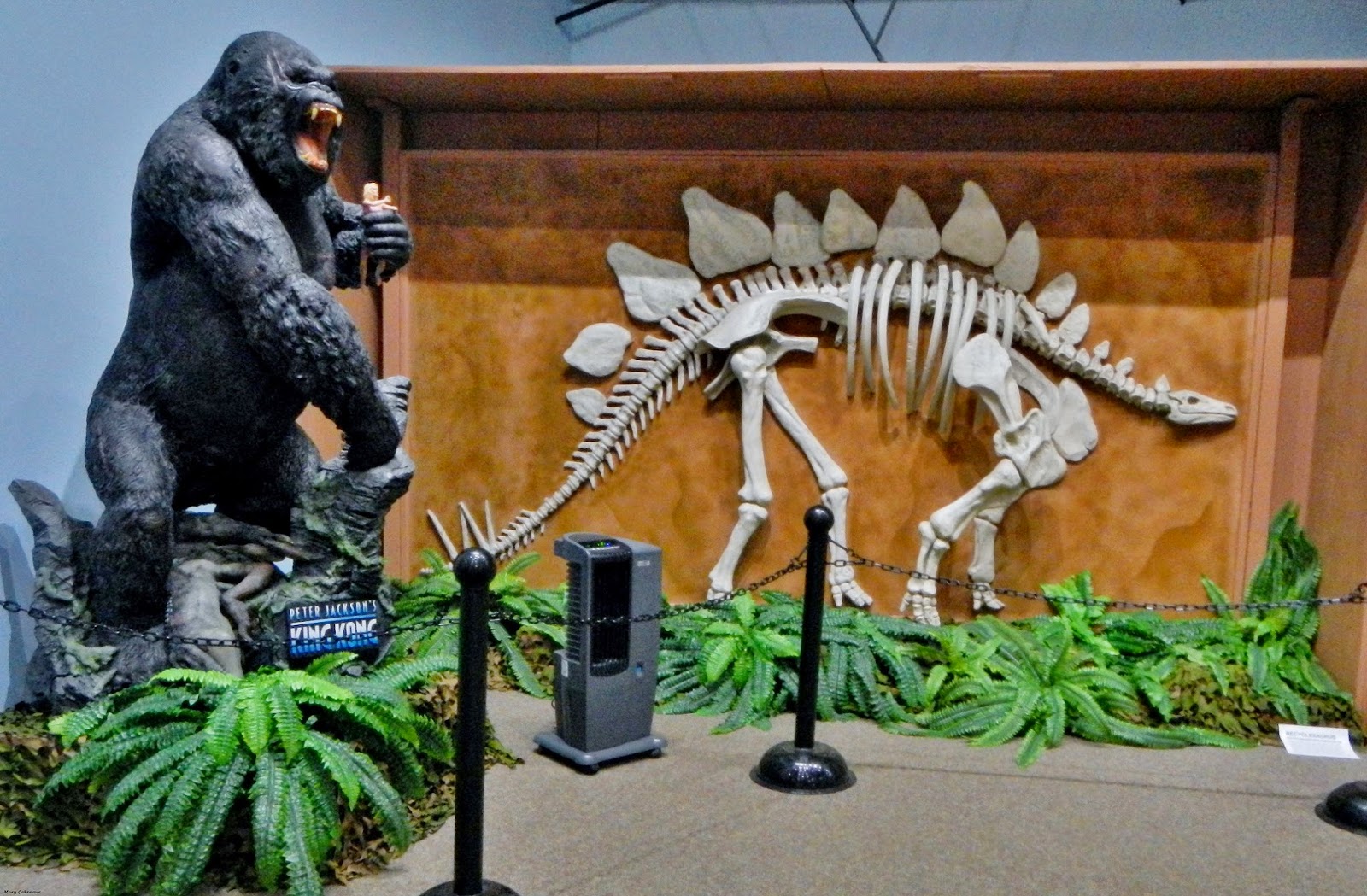 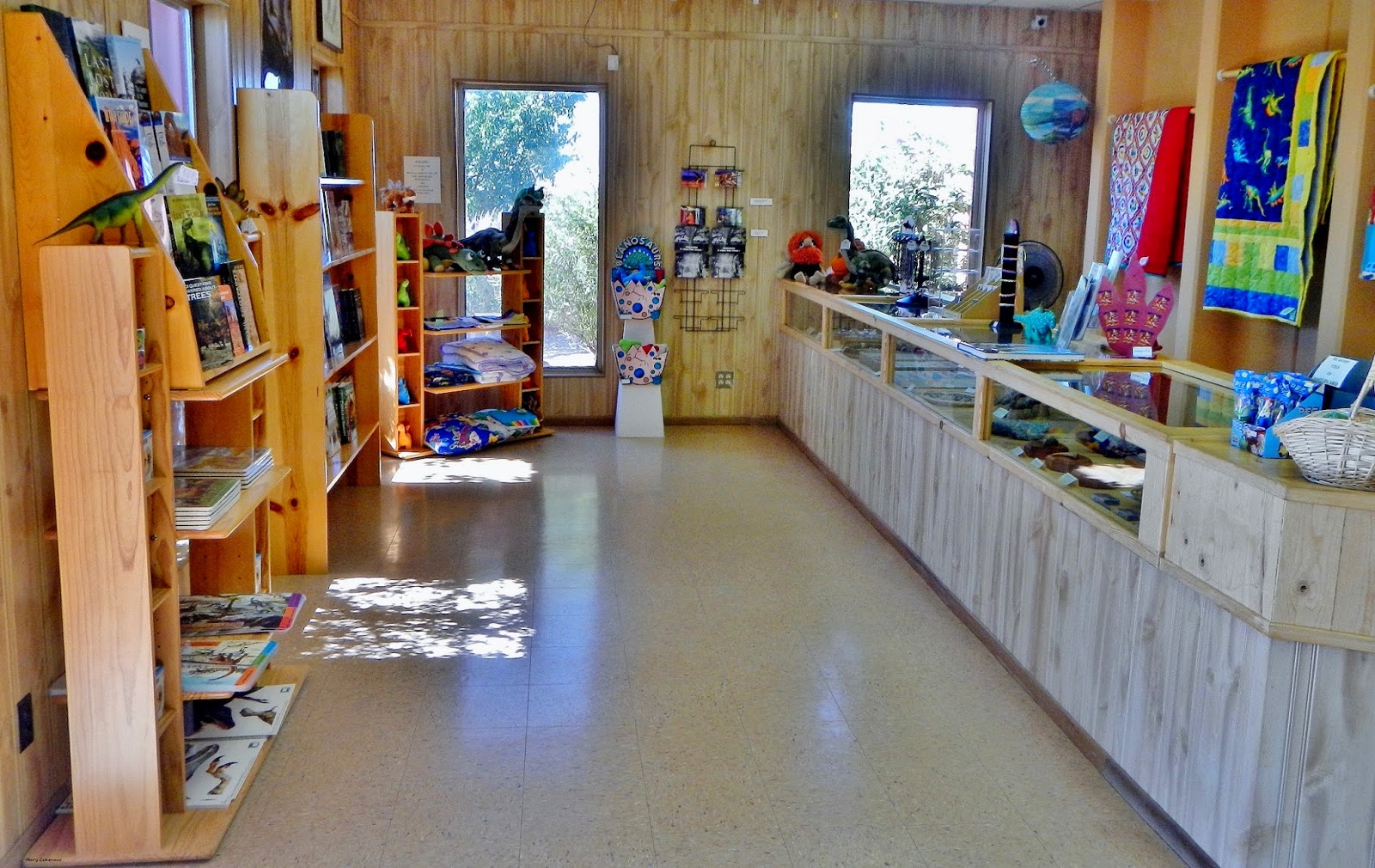 At the end of the tour, you'll exit out via the gift shop and they are loaded with books, posters, t-shirts, toys, jewelry, replicas, and more stuff I can't even remember.  There is something there for everyone; even the little kid inside each of us that wants that toy of our very favorite dino. 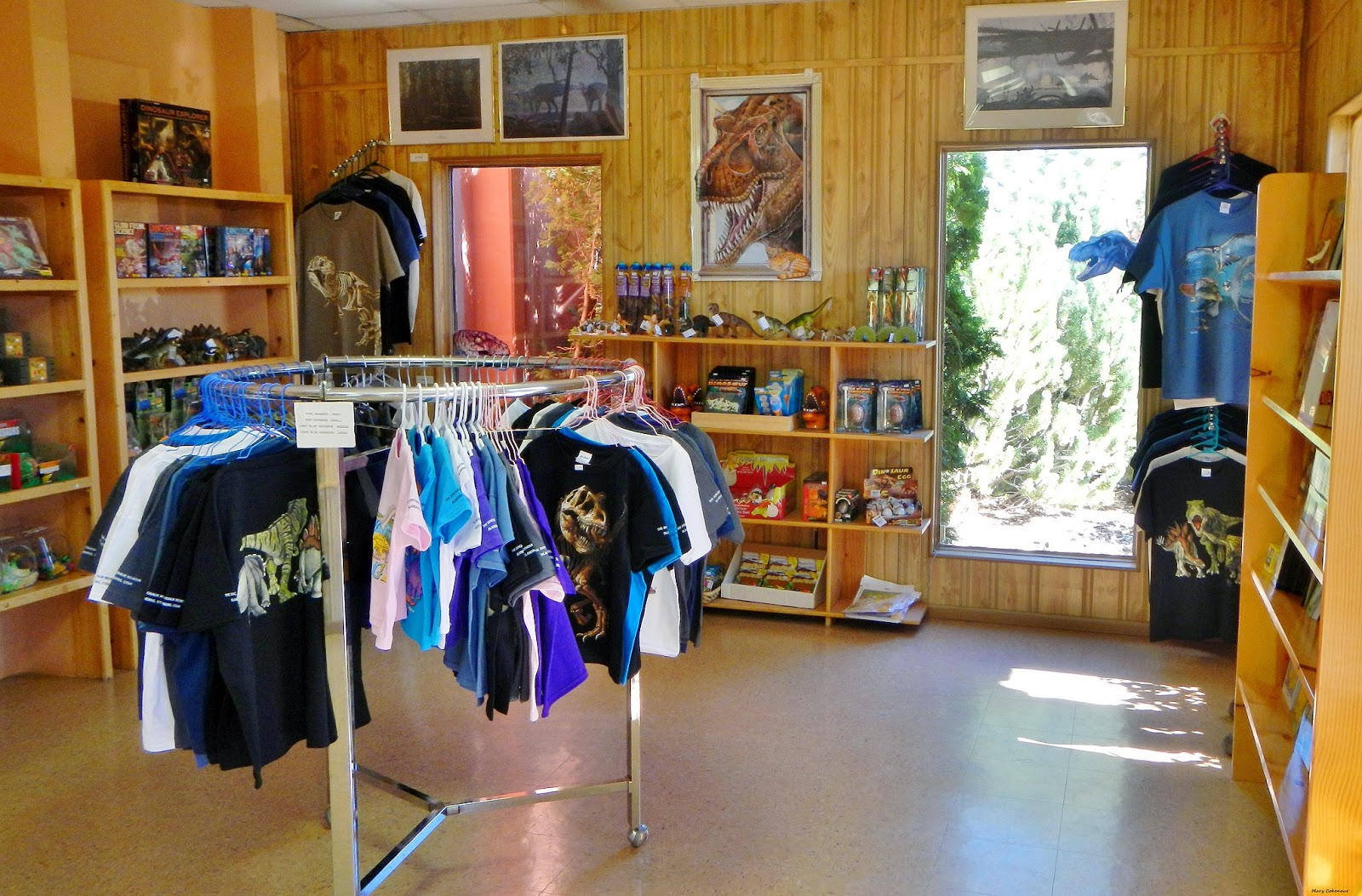 All the exhibits have professionally done up descriptions of the items you are seeing.  If you can manage to get a group together, call ahead and book a group tour...it is worth every moment!

Coming through Southeastern Utah, stop in at the Dinosaur Museum in Blanding.  You will be crying later on if you don't.