On the Edge at the Needles Overlook

The entrance to Canyonlands National Park - The Needles District can be accessed via Route 211, off Route 191 in San Juan County.  However, what you might not be able to see at Canyonlands itself without hiking, you might just see more clearly at the Overlook.   The Canyon Rims Recreation Area is the entrance to Needles Overlook aka CR 133(rough paved), Anticline Overlook (graded gravel and dirt) and Looking Glass Road aka CR 131 (dirt).  All three roads can be done in one day, but expect to do a lot of hiking, climbing and driving; it's a given you'll be doing a lot of stopping for photos. At Needles Overlook, there are several picnic tables placed at strategic places to give visitors a spectacular view of the area while munching on a meal.  The Overlook is quiet, so quiet you can hear the air blowing throughout the canyon, sort of like the rushing of water.  There could be the sound of a hawk or golden eagle nesting nearby; we heard one, but did not see it flying about.

Once you park up at the Overlook, you can follow the gravel trails (right to Hatch Point and Lockhart Basin; left to Indian Creek and Needles) to the fencing (be warned, there is walking over rocks also) and see the wonders before you.  The fencing does end at some point, and going beyond it is at your own risk; Roy and I went beyond.   We went right first to Hatch Point and Lockhart Basin; my photos won't be those outstanding photo shopped ones on Google Images, with colors of the rainbow popping throughout.  The outstanding scene before you speaks for itself.﻿﻿﻿﻿

There are times when there are shots I want so badly, I'm willing to crawl out on a ledge, or stand near to an edge to get it.  Am I afraid?  I don't think about it; to think about it makes you doubt yourself and that is when you will stumble, lose your footing or get dizzy.  Be careful moving outward, take the shot, be careful moving backward...simple.  To get the shot of the sandstone tower below the Hatch Point Lookout, I needed to get close to the edge.  My hubby has always been too much in shock to take a photo of me doing this "craziness", but finally he got his shot.  Warning, I'm no fashion model; but I'm a heck of a spit fire. 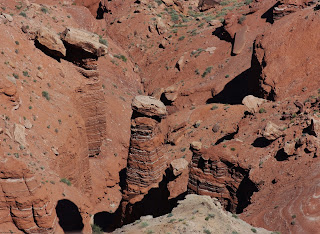 Making your way towards the other side of Needles Overlook will bring you to Indian Creek and, of course, a view of Needles.  Unfortunately, you're still going to be too far away from the Needles to make them out clearly, and the haze on a sunny day doesn't help any. 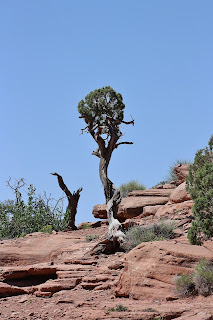 Rock and earth are not the only landscaping effected by wind, sun and the weather in general; the plant life can also be shaped.  Take for example this tree which looks like a long limbed female holding a ball (the greenery) above her head; the sensual twist of her body as her slender arms reach upwards.

Now I'm going to let you in on a little secret; there is a place you can go that will give you a slightly better view of Needles than the Overlook itself.  As you are just getting to the Overlook, there will be a dirt road to the left which leads to campgrounds.  As you can see from the photo of one side of it, the "fire places" were built with loving hands.  Please do not tamper with them, nor leave garbage lying around; these camp sites are free, shared with other travelers,  and should be respected.


Don't forget to enjoy all the scenery as you make your way to Needles Overlook; keep an eye out for Pronghorn Deer (Antelope).  The whole idea of the trip is enjoyment, so relax and put time in the backseat for awhile.