Two different legends about this sandstone pillar I'll be telling you about, Jail Rock aka Jail House Rock; located on CR 137 (south side) in Canyon Rims Recreation Area. Now CR 137, about one mile from the entrance to the Rims, off Route 191, is one of those, "I wonder where this goes?", type of roads. Looking northward, there is a square, blue background sign which states San Juan County 137, and so we followed it to a locked gate, but we could see Looking Glass Road and the Rockland Ranch beyond.

OK, back to where we started; looking southward there are several dirt trails and a teeny tiny sign that has "137" printed on it; but which trail to follow is the question?  The first trail goes straight and leads to a large dome-like sandstone formation; however, the gates on either side of it are locked.  Back track to the other trail that veers to the right...

Talk about third time being the charm!  Basically this is BLM land, but you can go traveling onto it as long as you pay attention to the signs:  Please Close Gate - there is most likely cattle gazing on the land, and you don't want them getting loose and wandering onto the highway;  Private Property or No Trespassing - it is what it is; keep out!

Following this dirt trail, you'll eventually either have to turn right or turn left; a flip of a coin had us traveling to the right where we passed sandstone wall after sandstone wall full of, what I like to call, amphitheatres; some barely formed, some fairly deep.  The trail finally ended in a "boxed" canyon and hidden among the trees was a cattle corral.  The scenery surrounding us was outstanding!

A little more back tracking and we were at another gate, cattle corral next to it, but beyond was our ultimate goal - Jail Rock aka Jail House Rock. 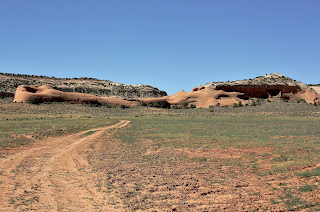 Those legends I mentioned earlier?  One is that in the early 1900s, rancher John Jackson would put his wife down into the 15 foot deep pothole, at the top of Jail Rock, to "keep her safe" while he was  at one of the saloons in either Monticello or Moab.  The other legend is that the local sheriff and his posse used Jail Rock to hold outlaws they caught before they could be hauled off to the local jail itself.

The climb up to the pothole is about a 45 degree angle along smooth sandstone.  The view from up top is amazing, but the one below is just as awesome.  You won't need climbing gear to get up to the top, but you will need it if you want to get to the bottom of the pothole, and back up again. 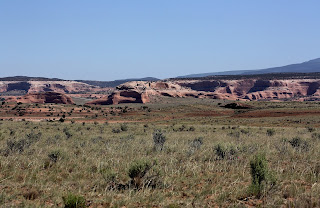 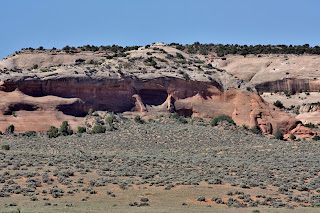 Next to Jail Rock is a formation I like to refer to as a "gated" amphitheatre; looking at it straight on it appears as if two pillars of a gate surround a sloped opening. However, if you look at it from the side, it has the appearance of a skull face. 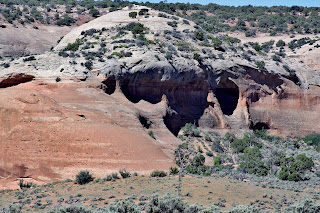 This is where fans of the cartoon series, "He Man", should now be shouting, "By the Power of Grey Skull !!!"

Now you have to be aware that the local residents of this area are, shall we say, a bit on the loupy side of life.  They run around willey-nilley not heeding any moving vehicles; their homes are everywhere, including on the dirt trails themselves.  Drive slowly as you never know when a head will suddenly pop up out of the ground; a fisted, furry paw shaking at you; as this little resident jabbers obscenities at having his privacy invaded.  I'm speaking about, of course, the local prairie dog populace.


Remember, all the trails I have been writing about are dirt and a 4 wheel drive vehicle is your best bet for traveling over them.  Pay attention to posted signs; have an overall great time exploring.