In my last post I showed you a photo of White Rock as seen from Peters Wash Road, but we're not done with it yet. The road begins to curve around the formation before you reach the junction of Lisbon Valley Road, so you will begin to see it as it expands. The coloring will no longer be all whitish, but the lower region will have a reddish hue. Once you turn onto Lisbon Valley Road, heading eastward, White Rock will again change its form; with the photo from the other post, you'll see it from three angles now. 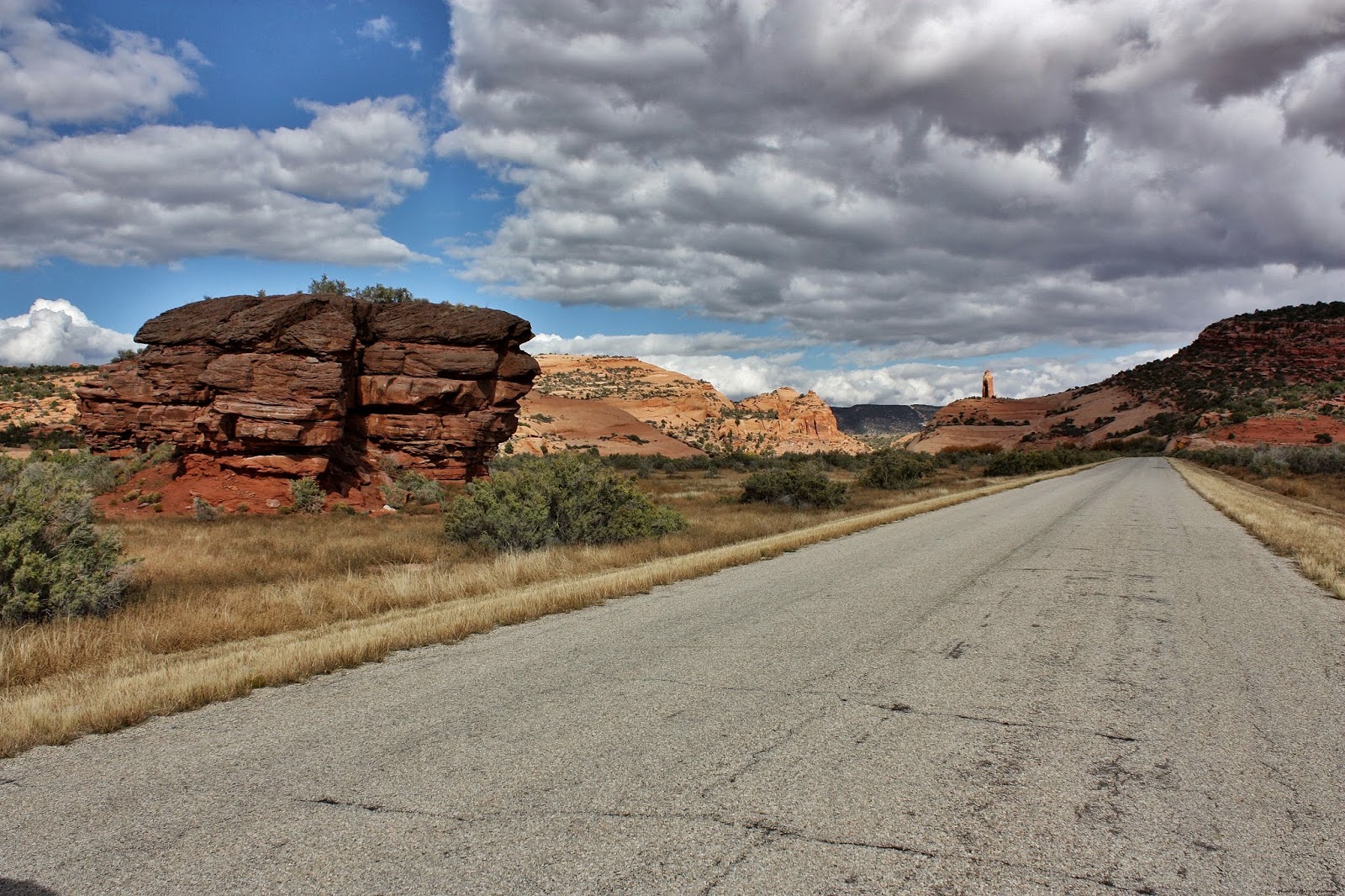 Looking down the road, you can see a stone pillar in the distance; that is Big Indian Rock and it will be more than what you see at this point. Lisbon Valley Road was once named Big Indian Road, but was changed once the mining/gas company developed its mine and plant in the area. At night, you can tell where the gas plant is from the flare stack's flame reaching into the sky. This is also Route 2448 and Big Indian Rock is located at mile marker 10; between company workers and visitors, it can become a busy road, so no wonder it has so many names.  By the way, around here, busy can mean more than four vehicles going down a road within a 15 minute time period.  A traffic jam is three pickup trucks in front of you and no passing lane; moving here from a congested traffic area...I can live with this very easily.

Big Indian Rock is a pillar of Entrada sandstone; the height is approximately 150 feet at its highest point.  I am posting photos to enable you to see it from three viewpoints, and how different it can look. 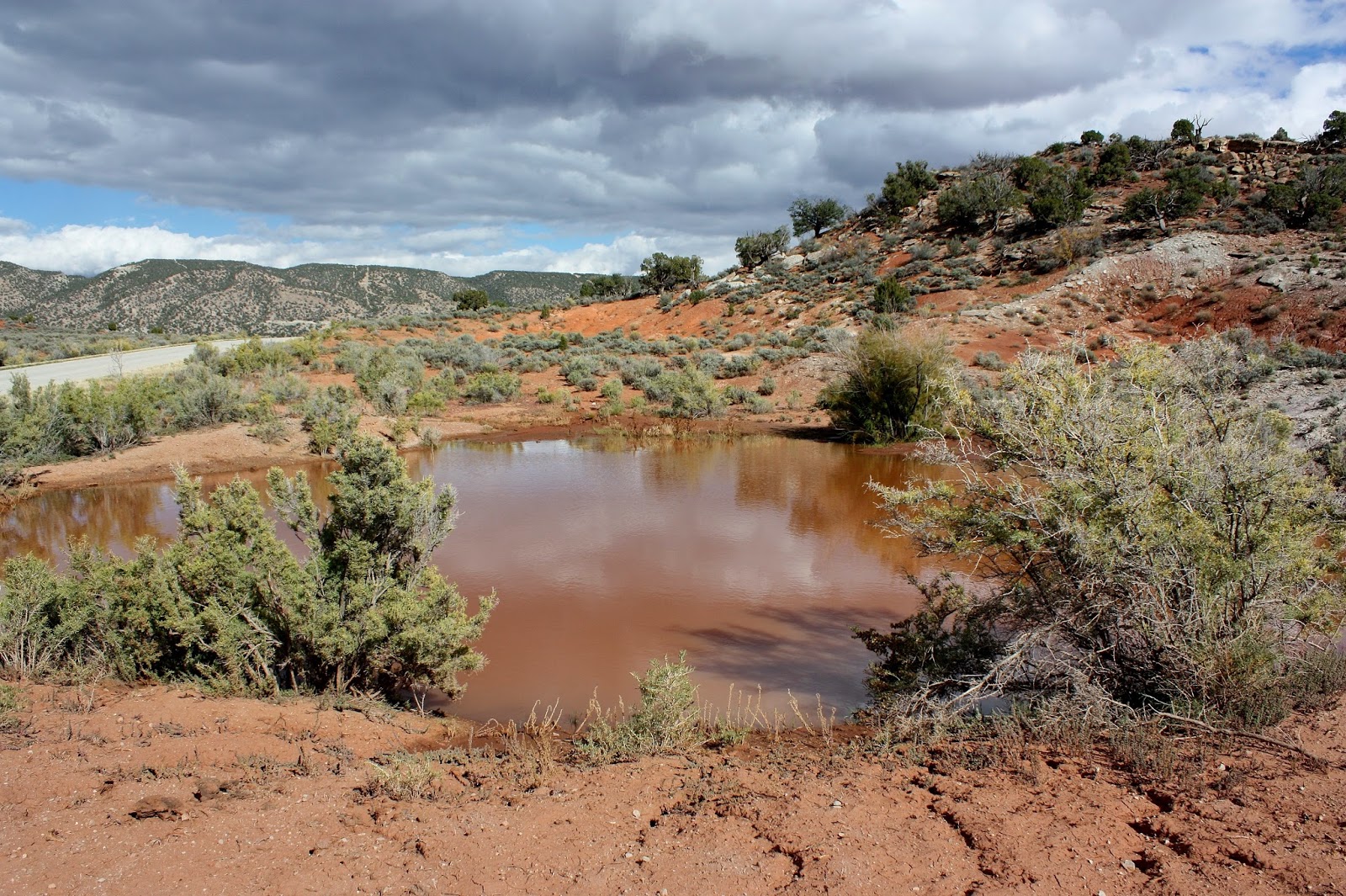 While I was taking photos of Big Indian Rock, I found one of the many ponds that have formed in the area due to the torrential rainstorms we had been having.


Since we had to do some last minute grocery shopping at the City Market in Moab, it was time to turn around and finally head on out.  Before you reach Route 191, look northward at a long sandstone formation that looks like it has a "dome" at either end.   In 1870, F.V. Hayden, leader of the United States Geological Survey of the Territories, offered employment to American photographer, artist and explorer, William Henry Jackson (1843-1942).  Jackson held the position of official photographer of Hayden’s surveys until 1878.  While photographing the Ute reservation at Las Pinos, Colorado, and cliff ruins in Mancos Canyon, near Mesa Verde, Colorado in 1874, Jackson photographed a red rock formation of caves while traveling through Dry Valley.   He gave the site the designation of "Cave Rocks / Sierra La Sal / Dry Valley"; "Sierra La Sal" refers to the La Sal Mountains and means "Salt Mountains".  Within the survey group was also Henry Gannett, topographer and Dr. A.C. Peale which Mount Peale, the highest peak in the La Sal Mountains, is named after.  During the Indian Wars, army regiments found Paiute hiding at the caves.


The one fact you can bet your money on around here is that there will always be something interesting no matter what type of road you take...paved, unpaved, rough or smooth.