Yesterday I described how Route 160 in Colorado merges with Route 491 as you travel southward towards New Mexico; how it breaks off and goes towards Arizona. Another time I described being on Route 163, traveling over the Utah-Arizona border to junction Route 160...yep, same Route 160. Route 160 West has much to see along it, and it does lead to the road for the Grand Canyon. Today's post is about taking Route 160 from Kayenta, Arizona and meeting that Route 491 merge; look at the map I posted yesterday and it will all come into focus. 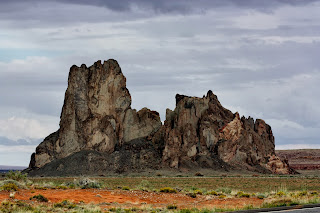 Alright, lets get on the road, shall we?  At the junction of Routes 160 and 163, make the left and begin heading eastward; as you travel along you will see many volcanic plugs, not as large as Agathla Peak, but still pretty impressive.  Imagination time!  Imagine being back in prehistoric times, the earth is rocking and rolling, forming its peaks, valleys, seas; the sky blackened with the smoke from thousands of volcanoes erupting.  Molten lava launches upward as it spews out from the ground, earth rises upwards also and begins to cool, forming hills and mountains.  The lava flows downwards along the cooled earth forming crevices and wrinkles within it; the tops seal off forcing the lava to seek out other areas of escape...the volcanic plug is born. 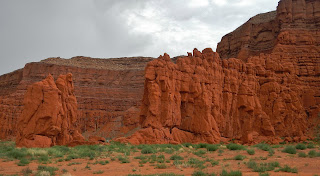 About 5 minutes in travel time from Kayenta, you'll see an area of very interesting sandstone formations; fenced off to keep visitors from climbing around, but a pull in area to stop and take photos.  Welcome to "Baby Rocks" aka "Baby Rocks Mesa" in Navajo County; named for the wind and rain eroded walls that seemingly have formed thousands of "babies" hanging onto them.  Along the top of the mesa, the formations resemble "urns" lined up along a shelf or fireplace mantel.  A larger formation near the front, and that is what caught my attention outright, resembles a "priest bowing before nuns".  This site was definitely unexpected. 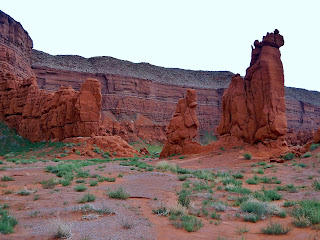 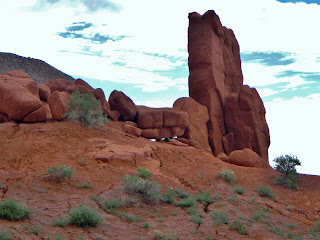 Only about 10 to 15 miles of the trip is sandstone formations and volcanic plugs; the rest is going to be flat, often very boring desert and stone virtually meeting the horizon.  There will be a tiny, and I mean barely populated, town here and there, but nothing to stop for really.  The road to Canyon de Chelly is Route 191 South; going northward would bring you to Bluff, Utah; this will be the first main junction you will see along Route 160. 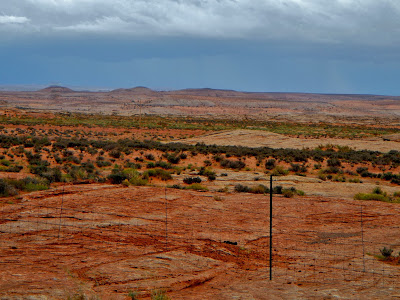 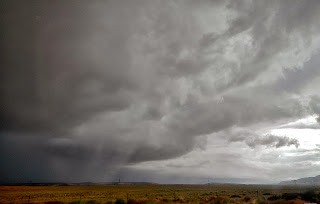 The entire trip the sky taunted us with a mixture of clear to stormy; the rain intermittent, so by the time we reached the entrance to the Four Corners National Monument, torrential rain finally decided to make its appearance. Back home to Monticello, Utah we went, but overall we felt that this was another grand adventure seeing sites whose existence we had no clue about before.