This is going to be one of those "wonder where this road goes" type of adventure stories.  After leaving Goblin Valley State Park, we decided not to go to Little Wild Horse Canyon as we were too tired from playing with the hoodoos for three hours.  That canyon area requires a bit of hiking and we didn't feel quite up to it at that point.  As we drove along the road back towards Route 24, we came to a junction with no name sign, but it did have a sign saying (I-70) and an arrow.  Well we did have to get back to I-70 to get home, so what the hell, might as well explore an alternate route.  Now here is the biggest mistake we made...no map; that's right, we didn't have a decent map of the area, just one of those state of Utah maps, and it wasn't helpful at all.  It wasn't until I began writing this travel blog that I found out that if we had had a better map to follow, we would eventually have come out on either Exit 114 or Exit 129 of I-70.  It would have been a much longer ride home, but the memories and photos would have been very worth it.  Instead we turned around after an hour, went back to the Goblin Valley junction, and returned home the original way we had come to the park.  Now we know better; I'm going to post two maps to help you know better too, and not miss out on a great adventure. 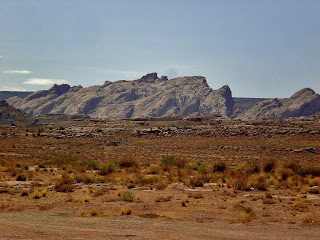 I guess I really should start the adventure with a little background from Route 24 as that is where you will get a good viewing of the San Rafael Reef. The Reef is on the eastern and southeastern side of the Swell; the tectonic plates were lifted up to form sharply edged fins layered against each other.  By the way, you might be sharing the roadway with the locals (antelope), so keep an eye out for them.  I can tell you right now that they demand right of way, and don't give two hooves about the road signs. 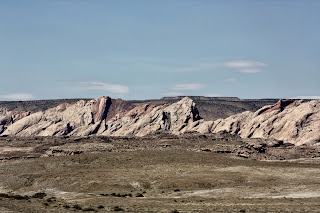 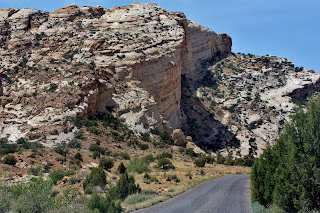 Now back to the road with no name sign; I've seen it referred to as "Temple Mountain Road", "Temple Junction" and "Hidden Splendor Road"; I like the hidden splendor theme and you'll see why once you get past the tall walls of weathered rock. 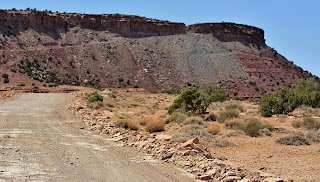 The road beyond becomes an unpaved, but well maintained trail of dirt; mountain bikers travel it, so a two wheel drive (car) vehicle should be able to make it as long as you don't pretend your vehicle is an ATV or SUV.  Since this was April, the melting snow had formed a small river that needed crossing; our SUV has high clearance, so our doors only became wet because of the water splashing off the tires. 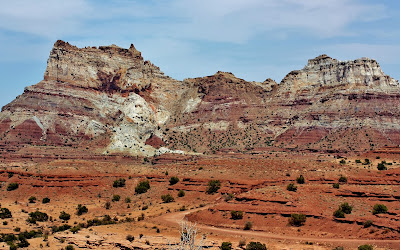 
Anyway, once you hit the dirt road, it is referred to as "Temple Mountain Trail", since that is the first named formation you'll end up near.  It is pretty impressive and I made sure to take photos from several angles to get its complete story.  This area was mined heavily for uranium, so you will come upon abandoned mines, equipment and building ruins.  Look, but don't touch, or go into, as they are unsafe. 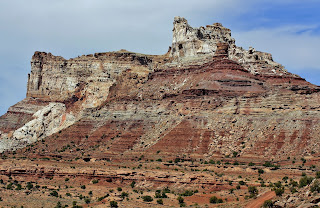 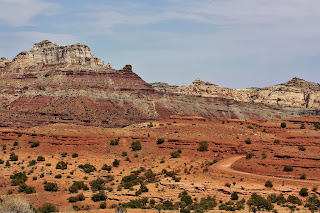 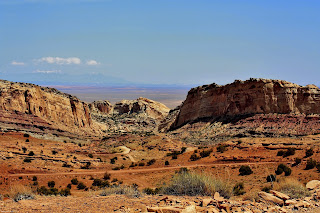 By the way, you're now traveling though the San Rafael Swell; a giant dome-shaped anticline of sandstone, shale, and limestone that was heaved upward during the Paleocene Laramide Orogeny Era (60-40 million years ago). The Swell is approximately 75 miles long by 40 miles wide, but don't let those numbers deceive you into believing you can travel the Swell in very little time.  Enough words, let the photos do the speaking for me... 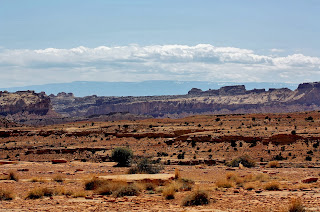 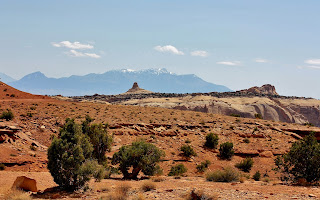 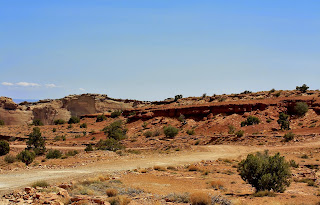 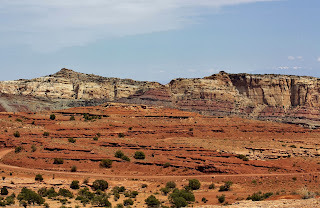 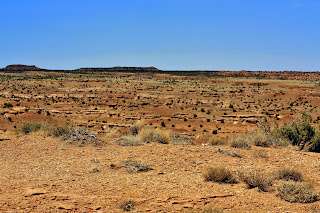 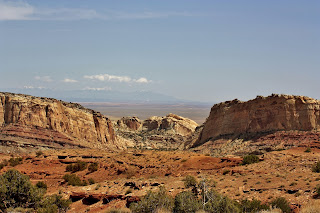 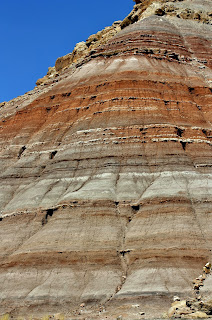 Look at the sandstone walls, all those multicolored strata indicate different millennia of formation.  An opening in a wall might be the site of an abandoned uranium mine, or the den of one of the local desert residents, like the rattlesnake. 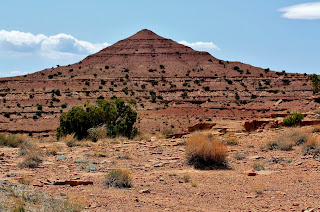 Two more formations to show you, and then this adventure comes to a close.  A common formation is the pyramid shape and not every one you see in every area has a name associated with it.  However, Flat Top Mesa (6480 feet above sea level) is along this road; once we reached a point of decision (fork in the road), well not knowing where we actually were, or what was ahead (no destination signs), we decided to turn around and go back the way we had come.

We're hoping the winter snows do not come early this year and that we can make a complete trek to one of the I-70 exits in November.  Snacks, bottled water, full tank of gas and, most definitely, maps in hand should get us through this time.  Oh yes, and the cameras, cannot forget the cameras!