The Autumn Season at Mesa Verde.

Roy and I have been to Mesa Verde National Park four times, once for every season; each time we have found something new to look at, or seen something from a totally new viewpoint.  Since it is October and the fall season of the year has begun, I am going to introduce you to Mesa Verde in the Fall.  The leaves are turning color, or already begun falling off the tree limbs, giving the ruins a new type of framework to view them from.  Between the four seasons, we have taken over 600 photos, so picking out just a few to give enjoyment was difficult, so not every set of ruins will be displayed; have to save something for the other seasons you know. 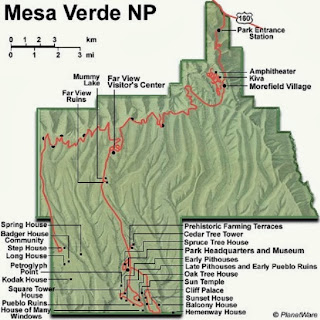 Mesa Verde National Park is huge; I recommend spending an entire day to be able to see as many ruin sites as possible, and perhaps take one of the ranger guided tours.  The Visitors Center used to be 15 miles from the park entrance, but it has been rebuilt at the entrance, so you can gather all your information and get tour tickets.  The long winding roadway is overseen by Point Lookout; this butte can be seen for miles and is basically the park's "Welcome, you have arrived!" sign. 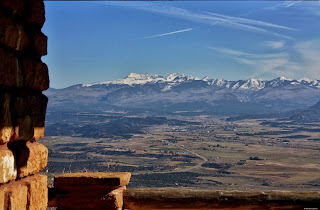 The first viewpoint you can park at has a stone and wooden balcony from which you can look over the Mancos Valley, and see the Rocky Mountains beyond.  At Park Point, you will have a short hike upwards that will afford you a magnificent view of the Montezuma Valley.  Park Point is also the highest point of Mesa Verde at 8572 feet above sea level. 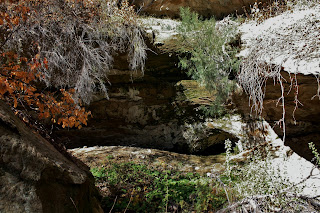 While there are plenty of sites along the way, on this Fall excursion we drove directly to the museum area.  The concrete walkway down to Spruce Tree House ruins is located there; it's about a three mile roundtrip hike with a short offshoot path to a petroglyph area.  Before getting to the ruins, there is a short primitive pathway to a cave like area; a pretty detour. 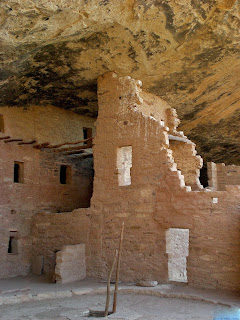 Spruce Tree House is a long and deep set of ruins which are roped off to keep people from climbing onto or walking through them.  There is a Kiva that can be accessed though via a very sturdy rope bound wooden ladder, and a Park ranger available to answer questions (and to make sure visitors behave).  One cannot help to wonder if anyone from the past is peeking through one of the many windows. 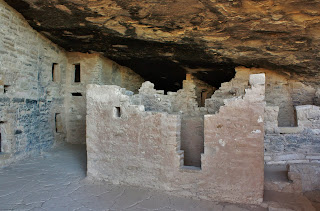 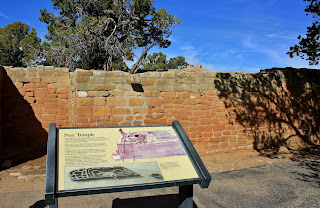 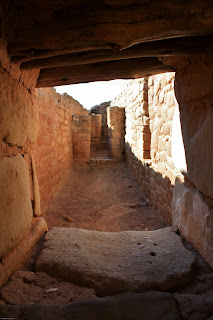 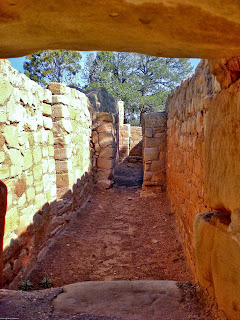 There are many signs throughout Mesa Verde, so it's just a matter of choice which road you wish to explore first, and you can always loop around to catch whatever sites you've missed the first time around.  We went towards the Sun Point Viewpoint where we could walk around the outside of the Sun Temple, before seeing the cliff ruins further down.  At the Sun Temple, you're best bet is to get a good window or doorway viewpoint for a photo; the walls are high and difficult to see over, since they cannot be climbed on.  My hubby likes this particular type of photo I take; he calls it the "Windows to the Past". 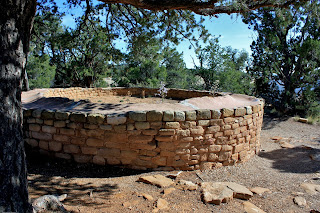 Behind the Sun Temple you can walk along the fence line and see ruins across the way; for closer views, drive to each designated viewpoint.

The road towards The Cliff Palace (ranger guided tours available) will also lead you towards an often missed site, Hemenway House.

Looking across another canyon, The House of Many Windows is hidden inside a cliff face; use the informational board as a guide to be able to find it. At the time I took this photo, I didn't have my zoom lens yet, so crawled out onto a ledge to get this shot. 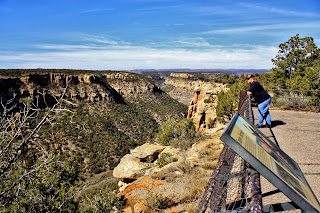 Speaking of canyons, don't be in a rush to get from site to site; take the time to enjoy the scenery and perhaps have a spiritual moment or two. 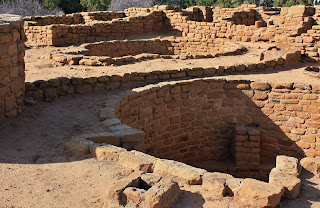 In the area called "Far View" can be found different sets of ruins; the Coyote Village can be accessed by walking a dirt pathway through a "forested" area.  Once there, you can walk into the ruins themselves, touch the stonewalls, and look into the several Kivas, one of which has wooden poles lining its walls. 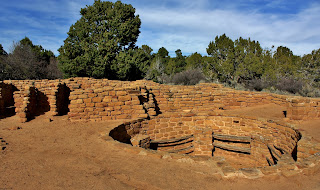 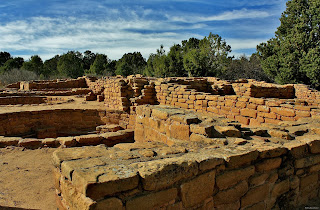 Mesa Verde in the Fall; amazing and beautiful, and wait till you see it in the other seasons.