If Two Routes Merge, Are the Formations Any Less Dramatic?

Well the answer to that question is a definite "No!". Routes 491 and 160 in Southwestern Colorado merge near Cortez; while 160 breaks off to continue on through Arizona and eventually lead to Monument Valley, 491 continues southward into New Mexico. I better post one of my favorite maps of the Four Corners, so you can see exactly what I'm describing. 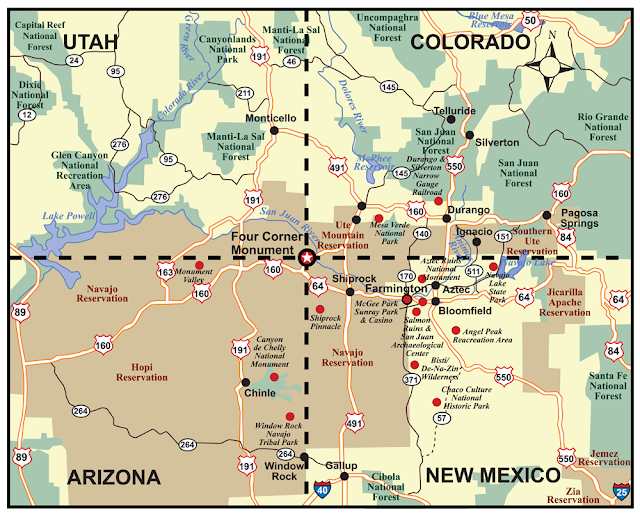 Once you begin driving down Route 491/160 towards New Mexico, it won't be long before you notice how much more rural looking the area looks.  There won't be anyplace to stop for gas, drinks or food until you reach the Welcome Center/Exxon Station in Towaoc; next door to the largest business in this town, Ute Mountain Casino.   While I personally don't think much of the casino, I attribute that to being spoiled by spending a weekend, once a year, in Atlantic City after it was rebuilt and revitalized.  Hubby and I definitely dislike their adjacent restaurant, Kuchu's, but once again, that's our personal tastes.


﻿﻿﻿
The landscape is going to become more desert like as you continue driving southward; more sand and rock with very little plant life.  The first formation that stood out was, I believe, Head Draw Mesa; well I believe it's that name by the location on the DeLorme Atlas and Gazette of Colorado.  Directly next to it is a rock formation called "Squaw and Papoose" and it is an eye catcher.

﻿
At the point where Route 160 turns off to head towards Arizona, there is a formation that is simply stupendous...Chimney Rock.  This is located on the Southern Ute Reservation (Colorado side); if you look for information on a Search Engine, be prepared to find references to a Chimney Rock in many states, and even one in Canada.   Basically, if you are interested in amazing formations, this will be one you'll need to pull over for and take photos.

After crossing the state line into New Mexico, the barren landscape will continue; an interesting formation may be in the distance here and there, but no road to get nearer though.   Now even though it was visible from the Route 160 separation point, Shiprock is in itself another amazing formation.  Shiprock is a volcanic plug, similar to Algatha Peak in Monument Valley, and very sacred to the Navajo.  By the way, it can also be seen from Mesa Verde, a point just beyond the old Visitors Center and Far View Hotel.   In the Navajo language, the name of this peak translates to "rock with wings" or "winged rock"; referring to the giant bird that carried the Navajo from the cold north to the warmer desert area.  When the white settlers came to the area, they called it "Ship Rock" as it resembled the sails on a Clipper ship.  Any photo I have ever taken of Shiprock, no matter how sharp the image to the eye, no matter how close I have come to it, always has a misty look to it.  I figure it this way, when it is ready to allow me a sharp, clear image, then it will; until then I'm going to be happy with whatever shot I get of it.


When traveling throughout the Four Corners area, always make sure your gas tank is full, you have plenty of bottled water, and that your camera is ready.  You never know what spectacular site is just around the corner, or straight down the road.