Jugs and Mugs, but are they Arches Too?

What exactly constitutes an arch being labeled a natural arch?  After reading several geological definitions, it basically comes down to: A natural arch is an opening in a free standing wall of rock (not necessarily sandstone) which has formed due to weathering, or water erosion.   Hmmm, so if it's not a wall that had a hole punched through it by Mother Nature, then it's not an arch?  Take for example Delicate Arch and Double Arch located in Arches National Park, Moab, Utah. They were formed from Entrada sandstone "fins", well at least one section of Double Arch was, the other part was a giant pothole that lost its bottom. They don't conform to the standard scientific definition, but they are still called an arch. What is a "fin" anyway? A free standing sandstone wall in the shape of a...you guessed it...fin of a fish.  Confused, join the party...and it's going to get more rowdy.

Jughandle (aka The Jug Handle) Arch of Moab, Utah is located on Potash Road at the opening to Long Canyon...and you'll see a pattern as you keep reading.  By the way, you can follow the Shafer Trail through Long Canyon and eventually come out onto the Shafer Basin which you can see from the Dead Horse Point Overlook.  The arch is a type of "cliff arch" in which it is not formed through a wall, but on the jutting edge of one; its long, instead of wide, formation making it look like a handle.

Now another bit of information I could gather is that an arch is typically a solid formation; but if it looks like an arch, but has pieces missing, its...what?  How do we know it wasn't a complete arch at some time, but Mother Nature decided to take a few bites out of it?  Is it just a "pillar" with bits and pieces missing?  You'll see what I'm referring to as I continue along the "jugs and mugs" path.


﻿
Still in Moab, lets go down Mill Canyon Road (4 wheel drive vehicles highly recommended) until we stop at the junction of "Mill Canyon" (on the right) which leads to the Dino-Trail and you can see "Determination Towers"; or "Halfway Stage Station", M&M Hiking Trail and Cotter Mine Road (on the left).  Follow the road to the left and head on towards Courthouse Rock, looking on the left side of this formation and what do you see, an arch!  Well, it looks like an arch, but seems to have, at the top, become separated from the main wall by a long crack.  Doesn't fit the typical definition, but....and if you hike the M&M you're entering into a canyon area, so there's that entrance to a canyon pattern again. 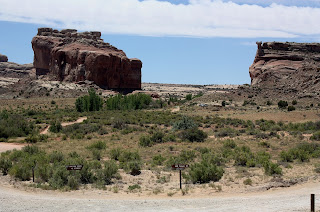 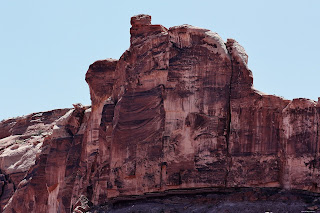 Two ways to get to the next mughandle/jughandle arch; continue around Courthouse Rock by following Cotter Mine Road.  You'll pass by the Sevenmile Rim trail which will give you an up close and personal introduction to "Determination Towers"; the trail is considered difficult in 4 wheel drive guide books.  A few more twists, turns and down the hillside before you get back to Route 191; near a parking area used as a starting point for ATVers; also nearby is the entrance to the road up to the Gemini Bridges, or Route 313 to Dead Horse Point and Islands in the Sky.  Anyway, as you come down the hillside and the road flattens out, quickly look behind and right to catch a glimpse of another one of those arches or pillars or whatever they're called by some geologist.   By the way, if you're coming onto Cotter Mine Road directly from Route 191, that's the beginning, and there's the arch, and so goes the pattern.   Technically it's not a hard core pattern; I'm having fun with it though, and so should you be...having fun that is. 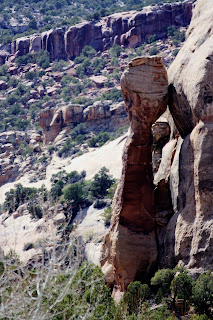 One more mughandle/jughandle and this one is located in San Juan County, Utah, down the road from Newspaper Rock on Route 211.  There is sits, on the right side of the entrance to Shay Canyon; looks like an arch with a crack separating it from the main wall, just like the other ones I've written about.  There is a trail that leads into Shay Canyon if you feel like walking to the natural structure itself; it's a bit overgrown here and there, and I highly recommend bug spray or the gnats will eat you alive.
﻿﻿

So, are all these mughandle/jughandle arches only found at the entrances to canyons? No, just the ones I've found so far, and believe me, there are many, many more to be found throughout Utah. There happens to be one at Harts Point, off the Canyon Rims main road, but you have to walk a trail to see it. I only just found out about it, so missed it when I was in the area before; but now there's  another excuse to go back.

Also, can they truly be defined as arches, or are they just pillars?   Let the geologists hash that question out; I'm just going to enjoy the discovery and views.