Welcome to the Desert. 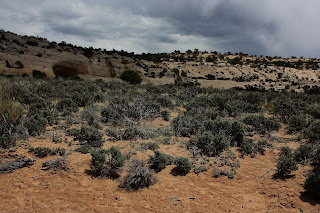 The desert is a deceitful mistress, who entrances with her charms.
Unwarily smitten, she can down you with one heatful blow. 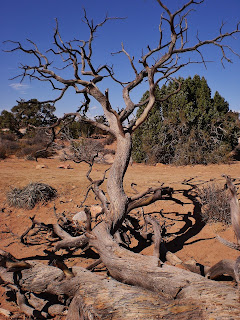 Her minions, scorpion and rattlesnake, cling to her swells.
Willing to sting and bite any unguarded lover.

The desert is a barren mother, who yet gives life to many.
Her skin is dry and dusty, water a distant memory.
Flowery roots grow shallow in her grave.
Yet sagebrush clings as a predator’s claws. 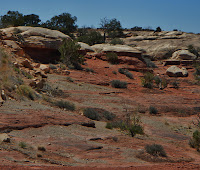 In the spring, the temperatures begin to steadily climb; so imagine my thoughts when I am asked by a visitor to the area, "Why is it so hot here!?!?"  Now my answer depends on if they caught me off guard, so I might stammer, "Wh...aat?"  This gives the person the chance to truly think about the question before they ask again; or they just might truly ask it outright again; so my answer is now, "Ummm...it's the desert." while giving them a confused look.  If I'm paying attention when the question is asked, I now have the choice of being a smart ass, "Oh crap, the oven is on and I left its door open!", and run away pretending distress.  Or the factual, "Well this is summertime, and this is the desert", and how they process that answer is up to them; and believe me, having folks say "Oh" and walk away with a confused look makes me almost fall down laughing.

When Roy first asked me to visit Utah, I went online and did some research: where were we going?, what was the locale and weather like?, what kind of clothing did we need?, and other basic questions for my basic survival. Yes, I said survival; this was an adventure, and any adventurer plans survival tactics.  When we decided to finally move to the area, well his being born and raised out here gave him somewhat of an advantage on the knowledge front; but I had to learn and experience it before making a conscious effort to embrace it. 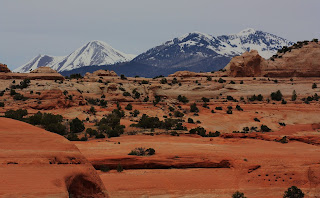 Number One Rule you must know about the area...THIS IS THE DESERT!!!   The average temperature for the year is in the 70s (F), but can reach the 100s (F) during the warmer months; the 40s (F) during the colder months; and into the 30s (F) at night at any time throughout the year.  Rainfall is sparse and unpredictable; it dries up quickly; humidity is slim to none; rivers are a major source of water and fed from mountains with a high snowfall during the winter months...no snow means low water supply which equals drought.  Our area is currently experiencing this; July is monsoon season, so hopefully it will bring the relief we need.  Carrying bottles of water with you is essential when hiking out in the desert; wear white or light colored clothing and hats; bring a jacket or sweatshirt along if you're going to be out at night; always make sure to fill up your gas tank and have an extra five gallon jug stashed in the trunk.  Tell someone where you'll be; if something happens and you can't get a cellphone signal, they'll know where to look for you.  Maps and a compass are definite benefits!

So you're now asking, "Why in the world would anyone want to live out here!?!?" and that's a good question, but I can only give you answers from my, and my husband's, perspective.  To us, it is a wonderland of ecosystems working together; it is plants and animals the likes of I've only seen in museums, zoos or botanical gardens; it is healing magick of red rocks and sand; it is a blue sky so rich in color, it makes you want to cry with joy.  My hubby admitted that he wasn't sure if I would be able to live out here or not, being a "big city East coaster, but he sure knows better.  He now says that he would not be surprised if I had been one of the first pioneers out here; I've acclimated so well, it's like I have always lived in the Southwest.  My health has improved immensely where I could hardly walk two blocks without panting; to now walking two miles and wanting to keep going another two more.  Perhaps it's a past life coming through loud and strong; perhaps it's just a change I needed to live a better life; whatever it it, it feels like home.

Alright, enough sentimental stuff, lets get to some fun things.  In Moab, right on Route 191 and near the entrance to Arches National Park is a large sandpile to play with.  Not talking normal sandbox pile, I'm talking an entire side of a hill that can you can climb, run down, slide down; just have some old fashioned, big time fun on.


﻿﻿
Want something firmer under your feet?  Climb the petrified sand dune you'll see along the road to the Needles Overlook in the Canyon Rims Recreation Area.  I've seen this sand dune described as "Big 'S' Rock" due to the "S"s formed from the wind erosion. 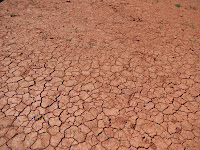 Now when you're hiking around the desert, take a good look at the parched ground; fascinating how it looks so similar to a giant granny square quilt covering the area.  Bet you didn't know Mother Nature could quilt, did you?

﻿
While exploring, if you see signs saying, "Stay on designated trails", there are a couple of good reasons.  One, the agency overseeing the area doesn't want you lost and then have to go find you; Grand County Search and Rescue is the busiest agency in Utah during the summer months.  Two, you need to stay off the cryptobiotic soil (crust) which is a mass of living bacteria, fungi, lichen, algae and moss; enriching the sand and dirt with nutrients; bringing it balance, so plants can eventually grow and thrive.
﻿﻿
Plants grow and thrive? It's the desert, what could grow there besides sage brush and cactus?  True, cacti need very little water to live, and this area has some of the most beautiful varieties; one being the Prickly Pear.

However, other flowering plants which you would think would need lots of water to thrive, do just fine living in the sand, or crevices of the red rocks.


It comes down to, when you hear desert, don't have a preconceived notice of what you're going to find. Sure it's sandy and hot, but think of it as a really, really large beach and have fun on it.