Lost from Bluff to Cortez; Sort of.

When Roy and I go traveling around the Four Corners area, we don't always have a destination in mind. Basically we point the vehicle in a direction, make sure we have maps, water, snacks and a full tank of gas; then go. We have found some interesting sites; we have found places that have made us both say, "What the heck!?!; and found many places not mentioned in guide books or on maps, you just have to know they're there. So starts this adventure from Bluff, Utah to Cortez, Colorado; mainly because we just wanted to know where a road went and what we could see on it. I'm going to post a map where I've noted some names, road number changes, or pertinent information to the "wanting a beer with their meal" traveler. With the lack of, or vague, road signs on many of these roads, you're going to appreciate this.

﻿
We headed south on Route 191 through Blanding and White Mesa until we reached the rustic and scenic Bluff.  Bluff was settled in 1880 and was basically the last stop on the route taken by the "Hole in the Rock" Mormon pioneers.  The San Juan River runs along there allowing trees and vegetation to grow; ruins and petroglyphs hidden throughout the area; amazing sandstone formations like the "Navajo Twins" (adjacent the Twin Rocks Cafe), and "The Locomotive" (overlooking the cementary).  Pioneers from the Bluff area headed up north and settled Monticello (Abajo Mountain area) in 1888; Blanding (desert area), however, was not settled until 1905.  Blanding has the Dinosaur Museum and "Edge of the Cedars" Museum; Route 95 at the edge of town (south) leads to Natural Bridges National Monument.  It is sort of like the contrary child, since the sale of any alcoholic beverage is banned within city limits; not so for Bluff or Monticello.  I'm mentioning this for any traveler in the area who enjoys such a beverage with a meal; look to the other towns for that pleasure. 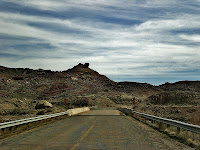 Since we didn't start this trek until after lunch, we decided to backtrack north to a road indicating "Hovenweep" was in an easterly direction; a map indicated this was Route 262.  It is a paved road, but not well maintained, so you might find it a bit rough and bumpy in spots.  I know the map above says it is a dirt road, but its been fixed up since that map was printed way back who knows when. 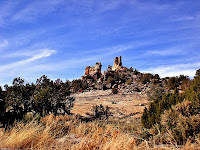 Along the way you'll see many formations in the rocky areas, if they had a specific name there were no signs indicating any.  You'll also be driving parallel to Native American Reservation land and the San Juan River can be spied now and then.  There will be two road junctions you'll come across, one to Montezuma Creek, the other to Aneth which are both situated along Route 162.  We stayed on Route 262 to see how far it actually went, and what else we could see on it. 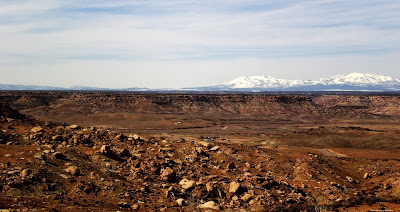 At the end of Route 262, a road to the left leads towards Hovenweep and the Hatch Trading Post; well somehow we missed the sign and stayed on the road leading to the right.  We later found out this was Road G which would eventually bring us out onto Route 491 (S. Broadway) just north of the airport in Cortez, Colorado.  By the way, you'll see snow on the mountains; we took this ride in early spring and it was still cold up there, but not in the desert areas.  So off to Road G we go... 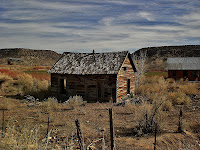 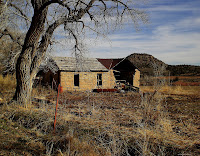 Now this is really a scenic, pleasant drive; the road is twisty here and there, so don't plan on driving too fast on it.  Once in awhile we would spot an abandoned building and wondered if it dated back to the early pioneers or not.  I finally had the opportunity to stop and take a photo of long horned cattle; a thrill since I'd only seen them on television.  I would have liked to not have the barbed wire in the shot, but those horns intimidated me enough to keep my distance. 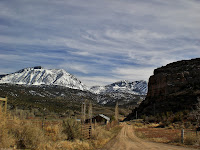 Along the road we did pass a "Welcome to Colorful Colorado" sign, but seeing Sleeping Ute Mountain was also a rather large hint that we were finally over the state border and in Colorado.


What we didn't expect was to see a roughly made parking lot, large sandstone formations and a sign stating that this was "Canyons of the Ancients" National Monument; yep, you guessed it, not written on our map.  By this time though it was nearing sunset, since daylight savings time had not sprung into spring as yet.  As much as we wanted to explore, doing it in the darkness was not on our to-do list. 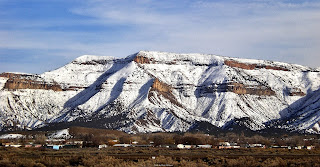 As we got nearer to Cortez, we saw the snow covered mountain range of Mesa Verde (park entrance is 9 miles east of Cortez).  We immediately recognized Route 491, made the left turn towards the main area of Cortez and treated ourselves to a celebration dinner.  Celebration?  That's right, we celebrated the end of another adventure in the Four Corners area; you're not living if you're not having an adventure here.