It's been a very long time since we've been able to travel anywhere, and I've not been inspired to write about past travels.  I very much enjoyed doing tourism work at two establishments.  However, due to "high school behavior" and lies told to get my job (must have been one heck of a lucrative job, right?), I had to leave those establishments.  The people who did that to me, I left them to Karma, and she has done her very best to get me justice.

Recently though, someone involved, from one of the establishments, did verbally apologize to me, for what was said and done to me.  However, the question of, "If it was verified that I was a good employee, and vicious lies were told, why didn't I get my job back?"  Something tells me that that would then become a public apology of wrongdoing, and they just couldn't have that.

Anyway, while at home, or should I say while, "forced into early retirement", I've been doing lots of reading, and enjoying other hobbies.   Recently I read a new Old West novel by one of our resident authors, and here it is... 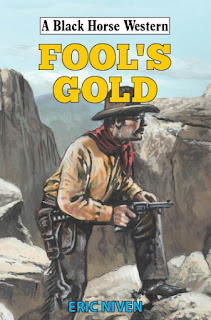 Opening up the cardboard packaging, sliding the hard copy book out, I am immediately sent back to my child to preteen years.  The hardcover novel is reminiscent of books, geared towards younger readers, such as Black Beauty, Gulliver’s Travels, and Call of the Wild.  Hand illustrated artwork, upon the cover, draws the reader’s eye in with an enticement of what is to be discovered within the pages.

Yet, this novel is not geared towards only the younger reader, but to the lovers of books in general.  Eric Niven, author of Fool’s Gold, has once again published a Western novel of adventure, gunslingers, greed, and good vs. evil.  His previous Western novel, The Reaper, has drama, action, humor and what is missing in many novels and movies these days of "instant gratification"...suspense!!! Several times I was on the edge of my seat wondering if, main characters, Malcolm and/or Lydia would make it out of a dire situation.

With Fool’s Gold, action was packed in from the very beginning, and there I was again, on the edge of my seat and holding my breath till the end of the scene.  Set in the time of the Civil War era, the Confederacy is in dire need of funds to keep the war effort on target.  A detailed map, of a mine in California, must be delivered, if the South is to remain solvent.

A stagecoach leaves Salt Lake City, Utah, in route to Carson City, Nevada, and a rail train that will take four passengers to California.  On board is Rory Sean MacTavish, a Pinkerton agent posing as a newspaper reporter; his assignment is to stop that map from reaching Confederate hands.

Jacques Fore’, an immigrant from France, was on a journey to seek his fortune; to start a winery and make a great name for himself.  Overweight, the heat from the southwestern environment did nothing to making his journey comfortable.

Vivian Creed, a genteel young lady, from Maine, was on her way to visit her patron, and guardian.  Taking time off from finishing school, her nonstop chatter ended soon as the stagecoach bumped along.  Of course the ungentlemanly smells assailing her nostrils did not encourage opening her dainty mouth for further conversation.

The fourth passenger is Jack Thaddeus Lowe, a gunfighter and gun for hire who had decided to branch out into “security services”.  He received good money for taking on the job of getting the map to its rightful destination.  What he did not know is that another Southerner wanted that map, not for the good of the South, but the good of his own pockets.  “The Boss”, and his hired hands would do anything to get the map, find the mine, and line their pockets with gold.

Then the adventure begins when the stagecoach driver is gunned down by a sniper.  The horses are running wildly and the coach careening; will it crash and all be killed!?!  Rory climbs up top to, somehow, gain control, the coach’s wheels hit a ditch in the rough trail, and…no spoilers sweetie!

This quote, from near the book’s end, speaks deep of life, and death, in the Old West.

“So here he was again, about to engage in a life and death struggle where men would die.  Even he might die.  He had been the means of causing death several times, but it still caught something deep inside him.  One minute a man is alive, he is a reasoning being, and the next he is useless meat.”

Oh, how I would love to tell you more, but that would ruin the entire story.  What I can say though is buy yourself a copy of this new novel, by Eric Niven.  Be prepared to have your heart racing, anxiety and anticipation build, and your fingers numb from holding the book tightly.  The ending will definitely not disappoint, as there is a plot twist no one, and their mother, would have ever seen coming.

I would like to thank Eric Niven for lending me his ARC of his novel, and having the faith, in me, for reviewing it.  Be assured that it was very difficult returning it, so now I better go buy a copy of my own, and you do the same as you will not regret it.