Back in April 2014, Roy and I traveled the dirt road past Recapture Reservoir, up into the Manti-LaSal Forest, but were stopped by snow and ice along the way.  We kept saying we would go back and finish the trail, but so many other adventures kept enticing us.  Well, in November 2016, we finally finished the forest trail; backwards!

Ok, when I say backwards, not the vehicle going backwards, but finishing the trail from the other way.  It goes back to the junction at 6.6 miles past the entrance to Devil's Canyon, off Highway 191 , and the decision to turn left and follow CR 110 to Camp Jackson.  Well, we sort of missed the turn off a little ways along, continued along, not realizing we were traveling further south, then west, then south again. 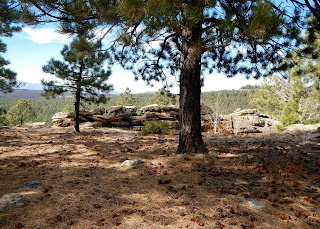 It was at mile mark 1.1 (set the odometer to zero at the junction) that we noticed an open area with a rocky crest at the edge.  We noticed a couple of campfire rings, but what interested us the most was the appearance the rocky crest gave to our imaginations...the remains of a castle.  The views from this rocky crest were breathtaking, from the peaks of the Abajo Mountains all the way to Bears Ears in the far distance.  Another one of those, "on a clear day, you can see forever" moments. 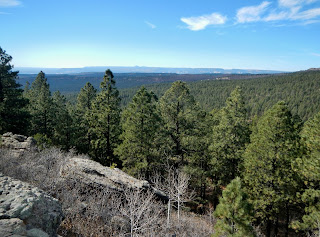 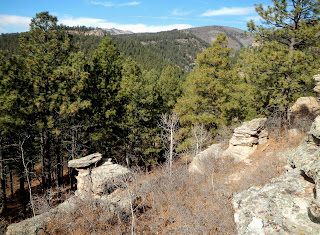 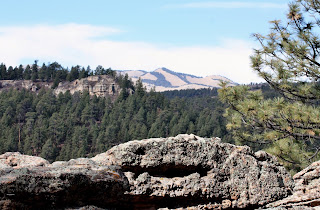 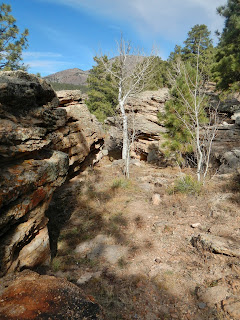 We were able to make our way downwards into the crest; Mother Nature did a heck of a job on sculpting the walls of this castle fortress. 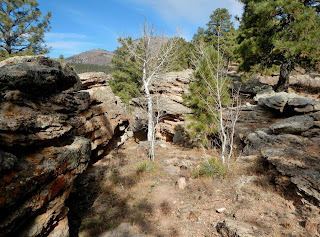 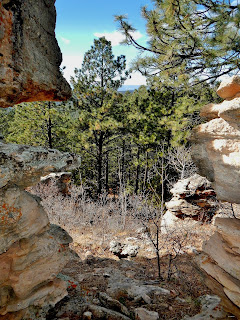 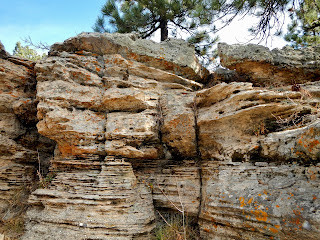 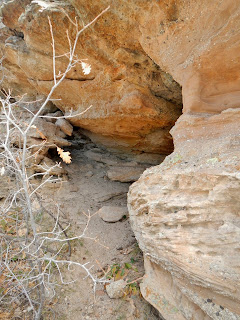 Up ahead we spotted a cave; at the same time we heard movement.  Immediately we looked down at the soft dirt and spotted them, very large cat prints...and we backed up quickly, but silently.  We were armed, we are always prepared, but why engage when we can quietly leave?  We're not hunters, we don't begrudge those who hunt to feed their families; hey, we eat meat too.  We are also not trophy hunters; we don't see the point of killing beautiful animals for fun and pleasure only.  Personally I see it this way; you want to hunt for fun?  Make it fair play; animals have claws and teeth; so then the hunter should only be armed with one knife (the claw) and his/her teeth.  See, fair play....oh, if you could see the sly smile on my face right now. 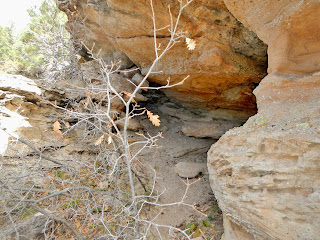 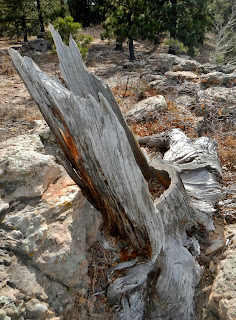 Along the top of the crest, some of the rocks had potholes filled with water; we saw movement, but could not make out what tiny creatures were residing inside.  There was also a dead tree that seemed to have been cut and used for fire wood, yet still had an artful elegance to it. 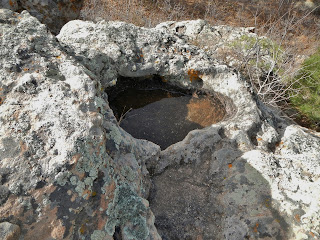 Now here comes an amusing story, and sadly I have no acceptable photos of the incident.  As we were returning to the trail, we looked ahead to see dust floating up and two rather large "things" running ahead.  At first we thought, "Coyotes?", but didn't see any long tails swinging as the creatures ran.  We were doing about 40mph, and could not catch up; then they did a left hand turn to run down an decline and we could see them clearly...bears!  They looked to be about a year old; we found a trail paralleling the decline into the forest, but they were too fast to get a clear photographic shot.  There is only one photo where the outline of two heads can be made out, but not much more.  What a thrill for the day, being mooned by two bears! 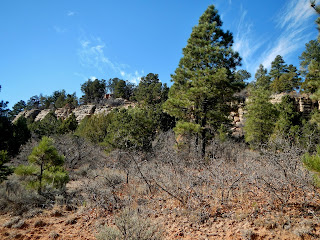 Mile mark 1.2 there was a rocky ridge line; it was then we figured out that this area is the same one that can be seen from Highway 191 as we drive north from Blanding back to Monticello.  We were always commenting, "Wonder how we can get up there?", and here we were!  The ridge line stretched for several miles, sometimes seen through the trees, and sometimes a full view of their naked glory. 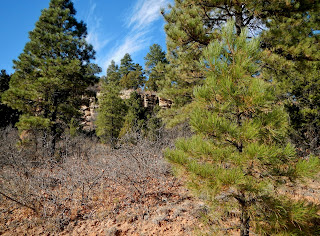 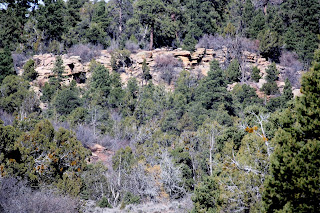 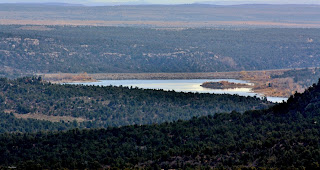 Being resigned to the fact that we weren't going to Camp Jackson, we continued onward until we finally saw two signs; FR084 and Manti-LaSal Forest.  It didn't dawn on us where we had been until we came to an overlook of Recapture Reservoir, and saw familiar old barns, cabins and open ranch land.  We had been here before; this was the forest road we had started back in April 2014, but not completed!  We did it, but backwards!  We began to laugh so hard, that some cattle nearby looked at us as if we were totally insane.  Perhaps we were, insane with the glee of accomplishment, the thrill of seeing bears, and having one of our glorious adventures...together. 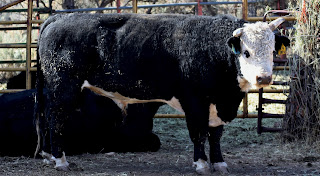 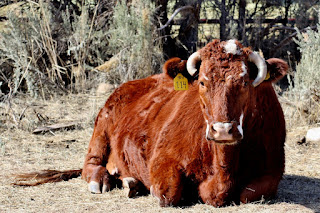 So, coming to San Juan County and want to try out this little adventure; here are some landmarks:

Monticello Welcome Center on Main Street (Highway 191), set odometer to zero and begin traveling south; 8.9 Miles is the Blue Mountain Dude Ranch (cabins and other facilities are available for rental); 9.5 Miles is Canyonlands Lodging (cabins and a lodge for rental); 11.7 is Devil's Canyon (NFS Campground and FR 085 - 6.6 miles and you're at the junction).  If you want to read more about the trails at that junction; use the Search function on the right hand sidebar of this blog.  Enjoy!