Ode to the Old West Cook.

Chuck Wagon, Ranch House, Wagon Train; the cook had one of the toughest jobs of the Old West.  Not only was he responsible for providing meals, but they better be good ones if he didn’t want to find himself staked out over an ant hill, or worse, lynched.  Provisions, many times, ran scarce which meant nothing could be wasted, it had to be transformed into something belly filling, and definitely not make anyone ill.  We take for granted supermarkets with every food item imaginable; we take for granted that restaurants and fast food joints are just around the corner.  Not so easy for all, not just the Utah, pioneers of the 1800s, and early 1900s where the next meal might be sucking on cactus juice, or roasting rattlesnakes. 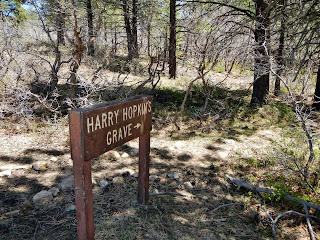 Which brings me to the tale of Harry (or Henry, presuming that was his full name) Hopkins; cook for the LC (Lacy (ey) Coleman) Cattle Company.  After the horrors of being a soldier during the Civil War Era, Harry decided to move to Colorado, join a ranch, be a cowboy; and he must have been a darned good cook.  Eventually, he found himself in San Juan County, Utah; continuing the cowboy life and running the kitchen there as well.   “Wash, a Ute Indian, reported a white man had been killed by lightning near the head of Devil Canyon.  Investigation showed that Hopkins, the L.C. cook, had been shot in the back – supposedly by an Indian.  He was found by Hickory Dennis and another cowboy lying face down with a pair of field glasses in his hand.  Before coming to the country he had been a cook for the riders on the Disappointment range in Colorado, at the time several Indians had been killed in a fight with the cowboys.  The Utah Settlers felt certain that the Utes had taken revenge on this inoffensive man.” ~from Saga of San Juan San Juan County DUP; page 94. 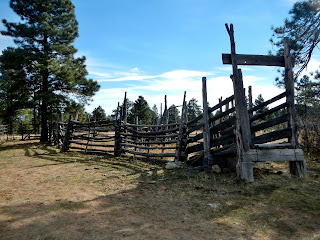 History of San Juan County by Albert R. Lyman filled in more of the story (page 62-63); “"In the late spring or early summer, while the new settlers were farming at South Montezuma, and making such preparations as they could to move to Monticello the next spring, the Ute known as Wash came in reporting a dead white man somewhere up the creek. Parley Butt went with him and found the body of a man named Hopkins. He had been cooking for the L. C. outfit and someone had apparently shot him from ambush while he waited on a log fence for the outfit to return.  He had crawled a short distance from the fence before he died."   Only 3/10ths of a mile from the grave is an old corral; could this have been the “log fence” where Harry was shot, and he crawled with the last of his life energy to where he is buried now?


Back then, the Indians blamed the white people; white people blamed the Indians; cowboys from competing ranches blamed each other, the Mormon settlers or the Indians.  Since all the people from that era are long dead and buried, and history is usually written by the victors, we'll probably not find out the true story, unless someone finds a written confession from dear old great grandpa. 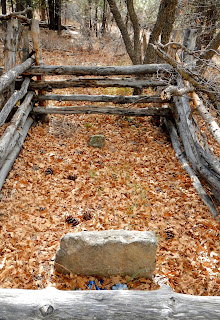 We came upon Harry‘s grave on one of our gallivants through the Manti-LaSal Forest in the Abajo Mountains one spring day.  Riding past the NFS campground at Devil’s Canyon, there is a junction six miles inward; the flip of a coin decided which trail to continue on.  At 7/10s of a mile (on CR 110/FR 084 eastward to Hwy. 191)), we got a real surprise...Harry Hopkins Grave.  Who was Harry Hopkins, How did he die, and Why is he buried off this forest trail poked at my curiosity; the research began. 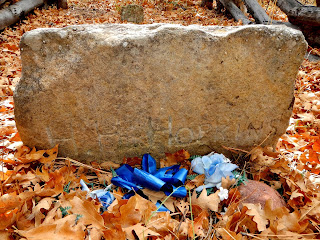 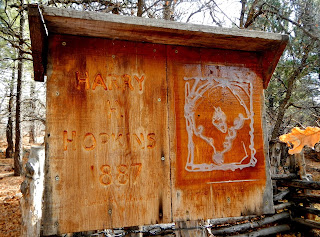 Now some folks asked me, “Why do you care so much about him?”  Simple answer really, because I can, and someone should.  One of the basic fears we have about dying is not being remembered; not having our life story passed on, or even our grave visited.  While an Eagle Scout Project by Cameron Palmer gave Harry a trail marker and information board; it wasn’t cared for after a while.  The plastic covering over the information sheet did not protect the paper, so it is extremely faded and illegible (May 2016); by November 2016, someone had torn it down completely.   I found out that local Sue Morrell and her husband often ATV up to the grave, fixing the fencing if needed.  While another visitor had placed plastic flowers near the headstone; Roy and I cleaned the dead leaves and debris away to make his name seen clearly.

So, to honor the memory of this Old West cook, I give to you my recipe for “Cowboy Stew for the Crock Pot”.  I’d like to imagine I would have made a good ranch cook myself, but then again, electricity has spoiled me. 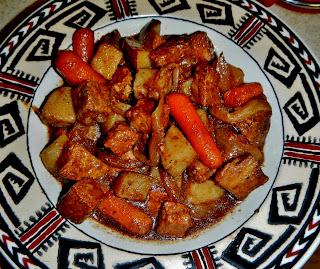 Cowboy Stew for the Crock Pot


Note on leftovers, if there are any; the gravy will thicken and become richer.
Mary Cokenour