Bear Cave, and Mammoths Too!

Known to locals; often hiked to as a family event; location passed on to each new generation; that's Bear Cave in San Juan County, Utah. As part of our July 4th family day with the Watkins Family, Roy and I became part of this generational event.  Well, we were adopted by them after all, so it stands to reason we know this family secret.  That's right folks, this is a well kept secret among San Juan County families, so I will NOT being giving directions or even landmarks to this location.

﻿﻿First, let me introduce you to the patriarch of the Watkins Family, Richard Watkins, age 79 and who will be 80 come February 2017.  This sweet, gentle man decided that Roy and I were as close to being family, as were the blood relations.  Basically his daughter Amy is our sister, as we are brother and sister to her; and now we have two new sisters, Ivy and Jan; along with a slew of nieces and nephews now (their children).  This proves the fact that water can be as thick as blood; consider this a life lesson from "This Ole Wise Woman".

The climb down into the cave, and returning up the other side, is not easy; there are boulders to climb over and between; fallen tree trunks to get over; many tight spaces and hugging of walls along ledges.


Looking back up to the top of the climb. 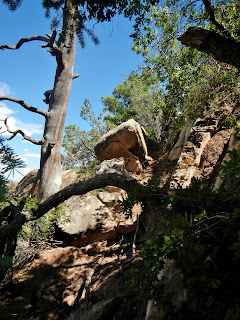 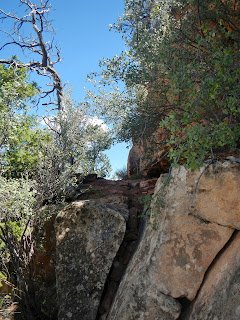 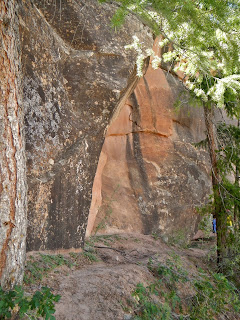 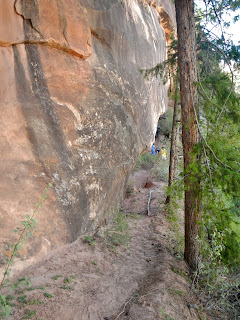 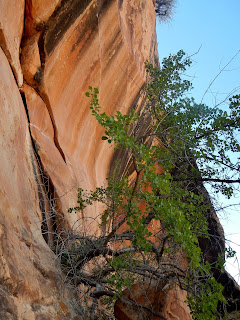 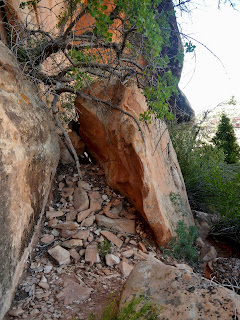 Not getting any easier. 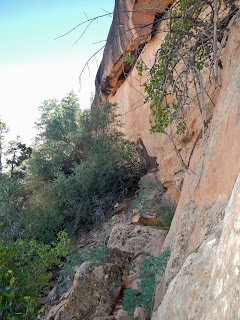 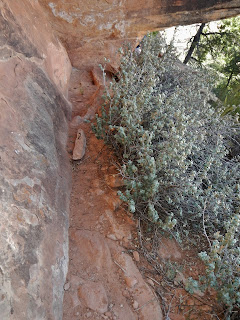 Squeeze through some boulders. 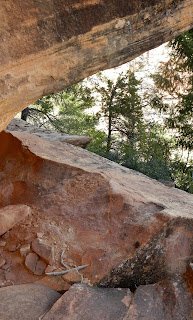 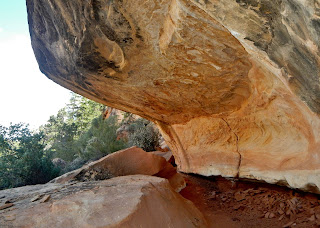 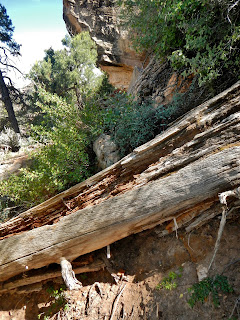 The Log of Sad Memories and Remembrance - the last time dad's wife, Marie, came here with him, her foot became entangled in a bush and she fell.  Previously diagnosed with an abdominal aortic aneurysm, a stent had been placed in the artery. When she fell, the stent was damaged; subsequent internal bleeding took her away from her family and friends.  While dad has been here afterwards, it's no longer a place of sadness, but remembrance of his sweet Marie. 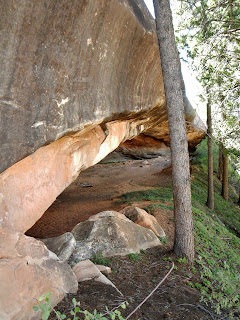 Bear Cave is immense; as you can see from the photos, viewing the family inside gives a good depiction of the size and depth.  Rock art adorns the walls, as does modern graffiti from locals who could not resist adding their names to the walls.  Unfortunately, the ceiling and walls of the cave have been flaking for generations.  Back in the 1950s, the Bear and two Mammoths were quite discernible; now only one Mammoth remains (partially) while time has erased the other. 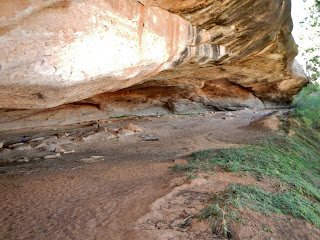 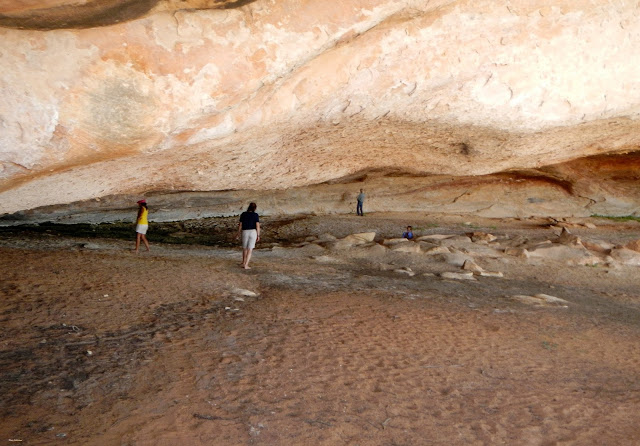 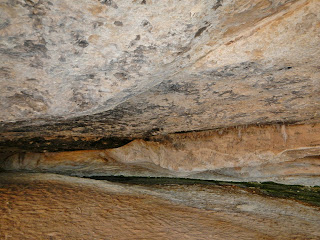 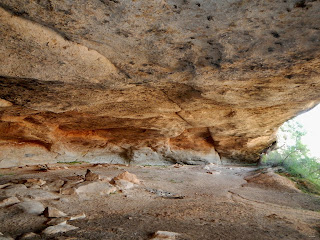 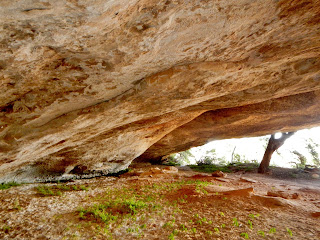 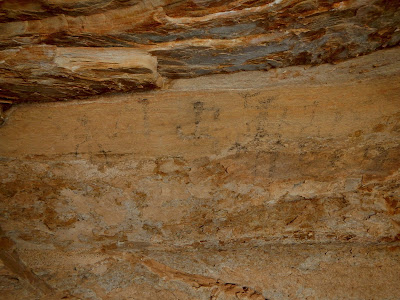 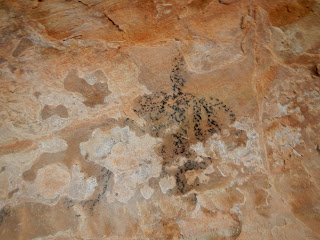 Looking out from the Cave.

I presume that the trees that now rise up tall in front of the cave were mere saplings when it was inhabited by ancient Native people.  Back then, they would have had a grand view of the canyon beyond. 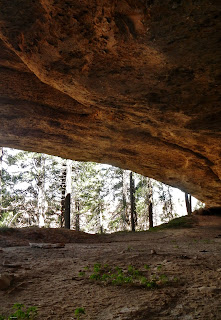 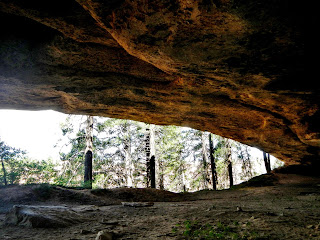 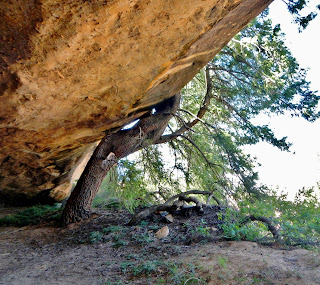 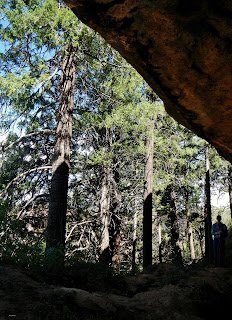 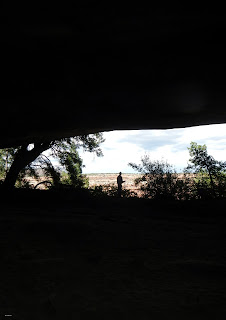 Knowing dad (yes, Roy and I call him dad), he was thinking about his wonderful Marie; she was there in spirit, keeping an eye on all of us, and smiling the whole time.  Well, we were there as family, and that was very important to her; family. 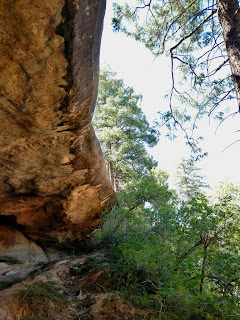 ....time for the long and strenuous climb up to the top, back to our vehicles for much needed fresh, cold water and snacks.  Hope you enjoyed this newest adventure, and no, I'm still not telling the location!

Posted by Mary Cokenour at 1:05 PM