This post is dedicated to all the whiners, whingers, spoiled brats, entitled, feeling owed, and all around basic cry babies who make the claim that, "Nothing can be done on a cloudy day!!!"  Stop sniveling!!!  No one owes you a thing because you don't know how to make the best of every situation.  No one is going to compensate you because you feel your vacation is now ruined.  Get over yourselves and better start learning how to enjoy life to the fullest!!!

Now that I have your attention; lets go gallivanting!  Across from Church Rock is another large sandstone formation called George Rock aka The Alligator aka Alligator Rock.  George Rock is named after George R. Adams (Mormon pioneer) who ran livestock there in the 1890s.  Now why the nickname "The Alligator" or "Alligator Rock"?  Use a little imagination when looking at two of the side views; the snout, eyebrows and head of an alligator can be seen.

To access George Rock, go about a half mile down Route 211 (the way to Newspaper Rock and Canyonlands National Park - Needles) and there is a dirt road (not the one with the metal gate, after that one) through the sage brush.  If you miss this one, there is another about a tenth of the way further; it can get bumpy, so 4 wheel drive is advisable.  As you travel around the formation, take note of how it changes in structure; the side facing south is home to several huge alcoves; while facing east is a small arch that can be hiked to. 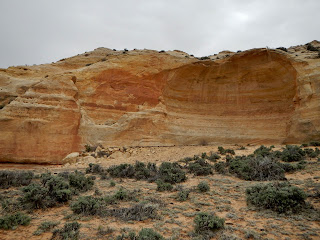 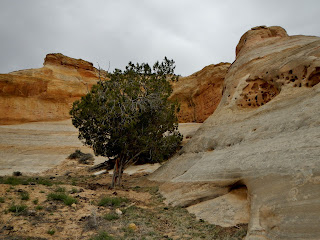 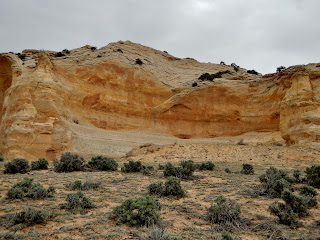 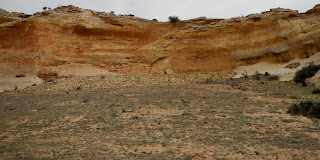 ﻿
Views from the Alcoves

Now George Rock has two other claims to fame, one infamous; the other as a minor part in a cult's development.  In 1961, a B52 Bomber crashed; parts of the plane were distributed at both Church and George Rock.  It was speculated that the plane was carrying nuclear bombs, and the Air Force did a thorough clean up of the area.  An article about the crash can be read at the San Juan Record's archive; link: http://www.sjrnews.com/view/full_story/17361767/article-Revisiting-the-crash-of-Felon-22instance=1.  In the 1930s, Marie Ogden and her Home of Truth cult resided in the Dry Valley area; George Rock being part of that.  Now there are piles of debris (wood, metal and a stone foundation) still there, but what, if any, are part of either the B52 crash, or the cult's buildings, is unknown; there is also a small, white windmill and an irrigation ditch. 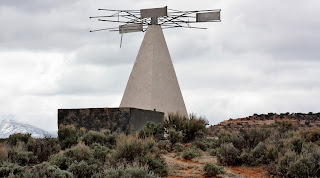 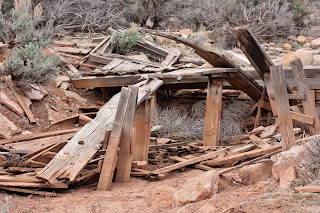 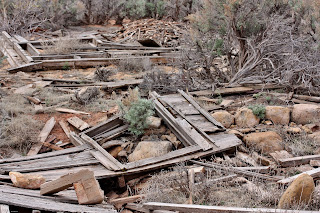 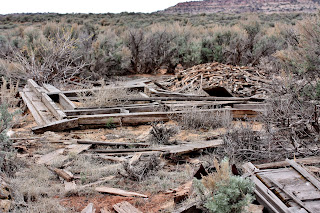 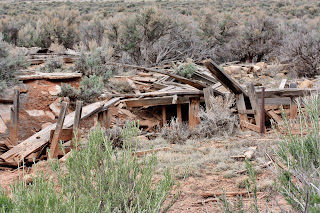 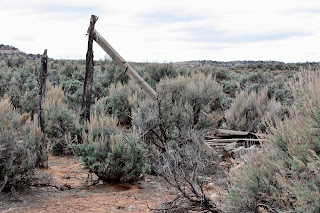 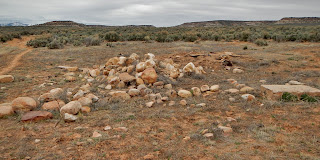 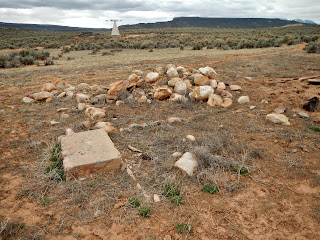 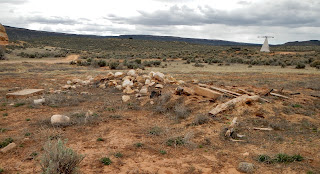 The day we were here at George Rock was in April; it was cloudy with a slight breeze...not one drop of rain, no thunder, no lightning, and we had an awesome day of hiking around and exploring.  For those who are afraid of a cloudy day, well you'll just go on missing out on life and adventure.

Oh, we went back in May on a beautiful sunny day, but you'll just have to wait for those photos now, won't you.

Posted by Mary Cokenour at 4:29 PM