We had not planned on following the pioneer trail; oh, I should explain which pioneers I'm referring to. The "Hole in the Rock" pioneers, who finally made it to Bluff and established the first Mormon settlement in San Juan County, Bluff Fort. Anyway, Roy and I were actually attempting to make it to River House Ruins; without a boat to go along the San Juan River, overland was our only option.  Depending on which brochure you might pick up, this trek can be described as moderately easy to extremely difficult.  The "River House Ruin" brochure, put out by the BLM, only gives directions via boat and the San Juan River.  The "Around Bluff" brochure, put out by the town of Bluff, only says, "You can climb the hill, but be careful.  You can drive past the Rincone  Trading Post to the ruins"...they do not warn you about the section of road you need to climb that is basically carved out of sheer rock and extremely uneven (hence the independent suspension being needed).

Once you find the trailhead (CR 2351), it will be an eight mile hike one way (round trip 16 miles).  For driving, you must have 4 wheel drive, high clearance, skid plate and independent suspension.  We only had the first three for our vehicle, so were able to drive the first four miles, and hiking was required for the next four.  Remember, I'm giving you our first hand experience with this, so take it or leave it.

Using Bluff Fort as the starting point, travel down Route 191 towards Monument Valley (SW); at the junction of Routes 191/163, continue straight (SW) on Route 163.  Once through the Comb Ridge pass, make the first left (about 1/4 mile from the pass); there will be a sign telling the story of the pioneers...this is CR 2351. All in all, it's about a 7 mile trip from Bluff Fort. 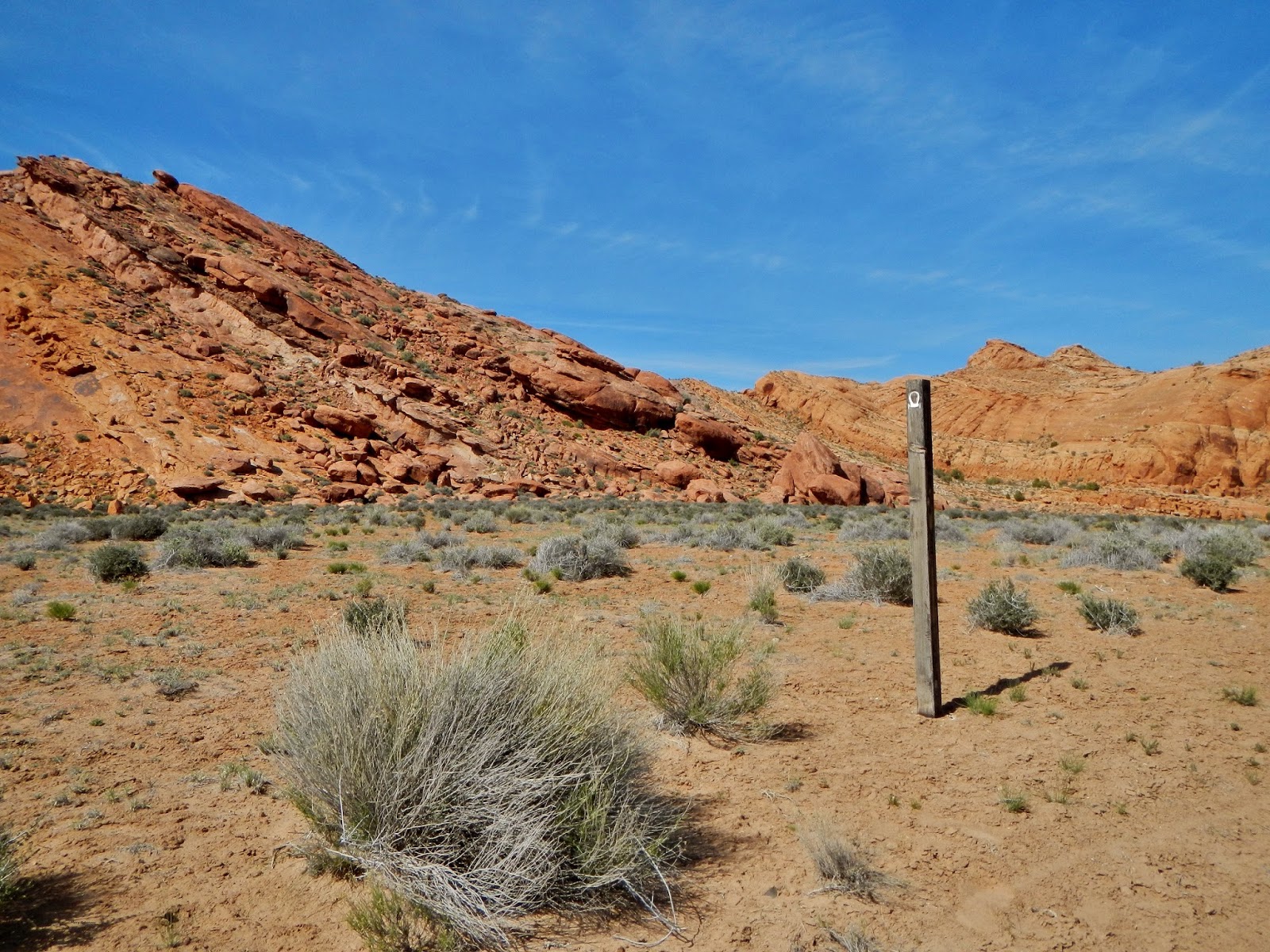 CR 2351 follows the pioneer trail as they had attempted to find a way over the Comb Ridge.  The entire trail is mostly sand, crossing into and out of several dry washes, and many a steep hill for almost four miles.  There are green wooden posts here and there to mark the trail, a covered wagon painted on to help notify travelers they're on the correct route. 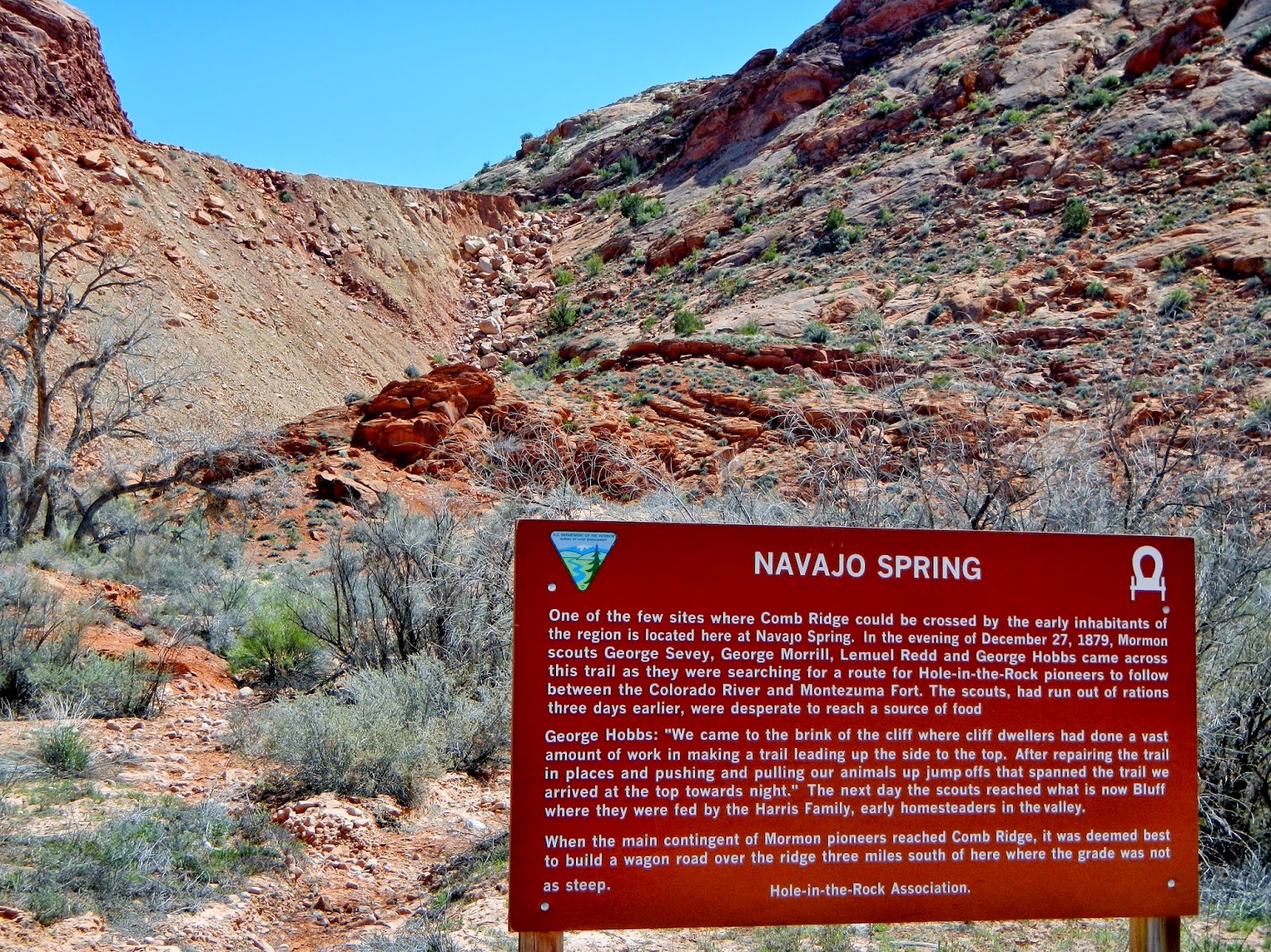 Oh, did you remember to set your odometer to zero once you turned off of Route 163 onto CR 2351?  The first informational board is a short history of the pioneer trail in this area; the second will tell you which way to go when you encounter the first fork in the road.  Hint, go left and follow the curve around the bushes.  4/10ths of a mile down is Navajo Spring; the pioneers sent out scouts to see if this was a viable way up and over Comb Ridge.  As you can see from the photo, it's a long climb upwards; seeing it up close and personal will give you a much better view of the pioneers' "Oh Hell No!" moment.  Remember, they weren't looking at Route 163 and an opening in Comb Ridge; they were looking up, up, up to the top of Comb Ridge.


Lets take a look at the terrain you'll be traveling over and some scenic sites.. 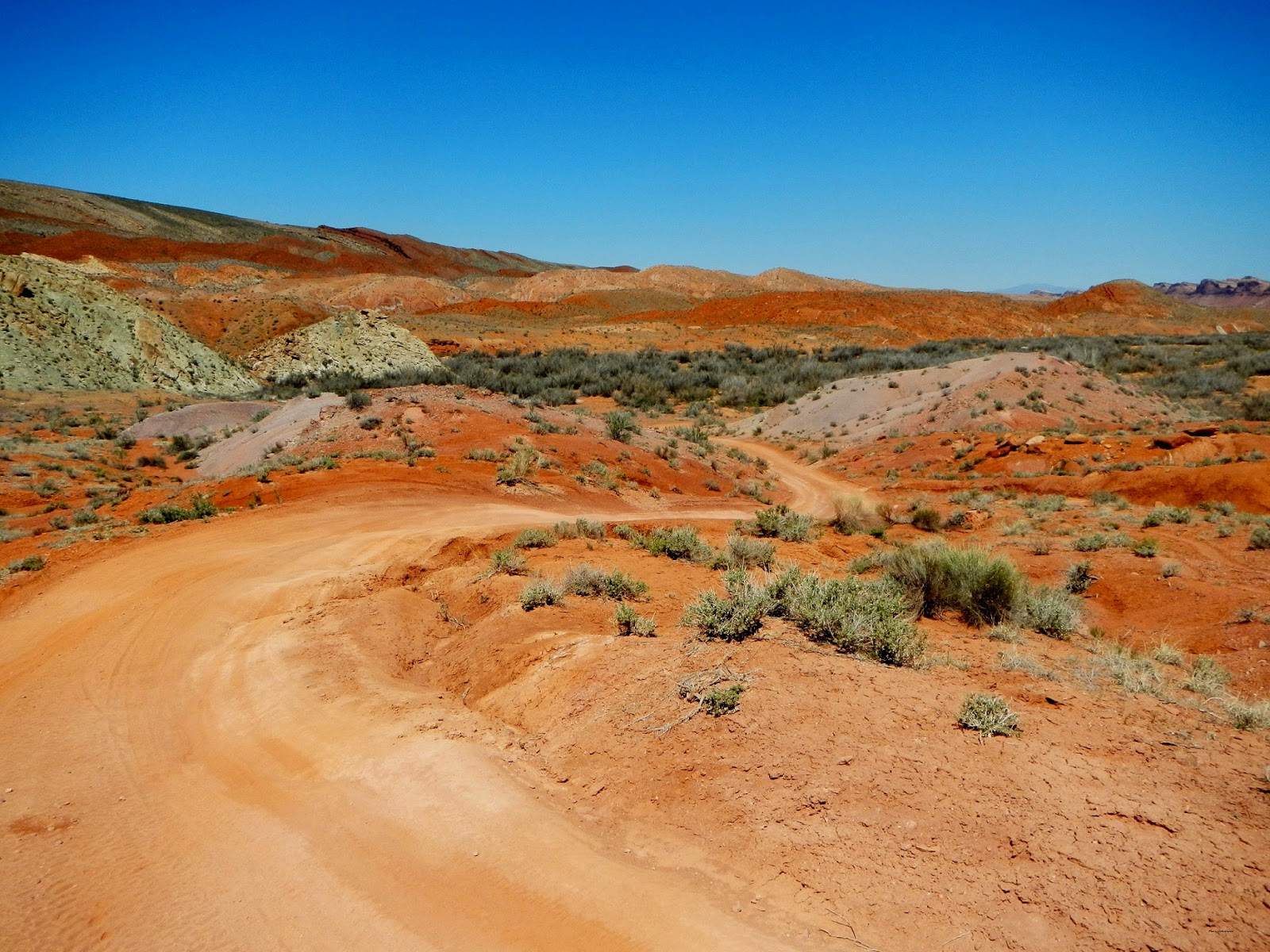 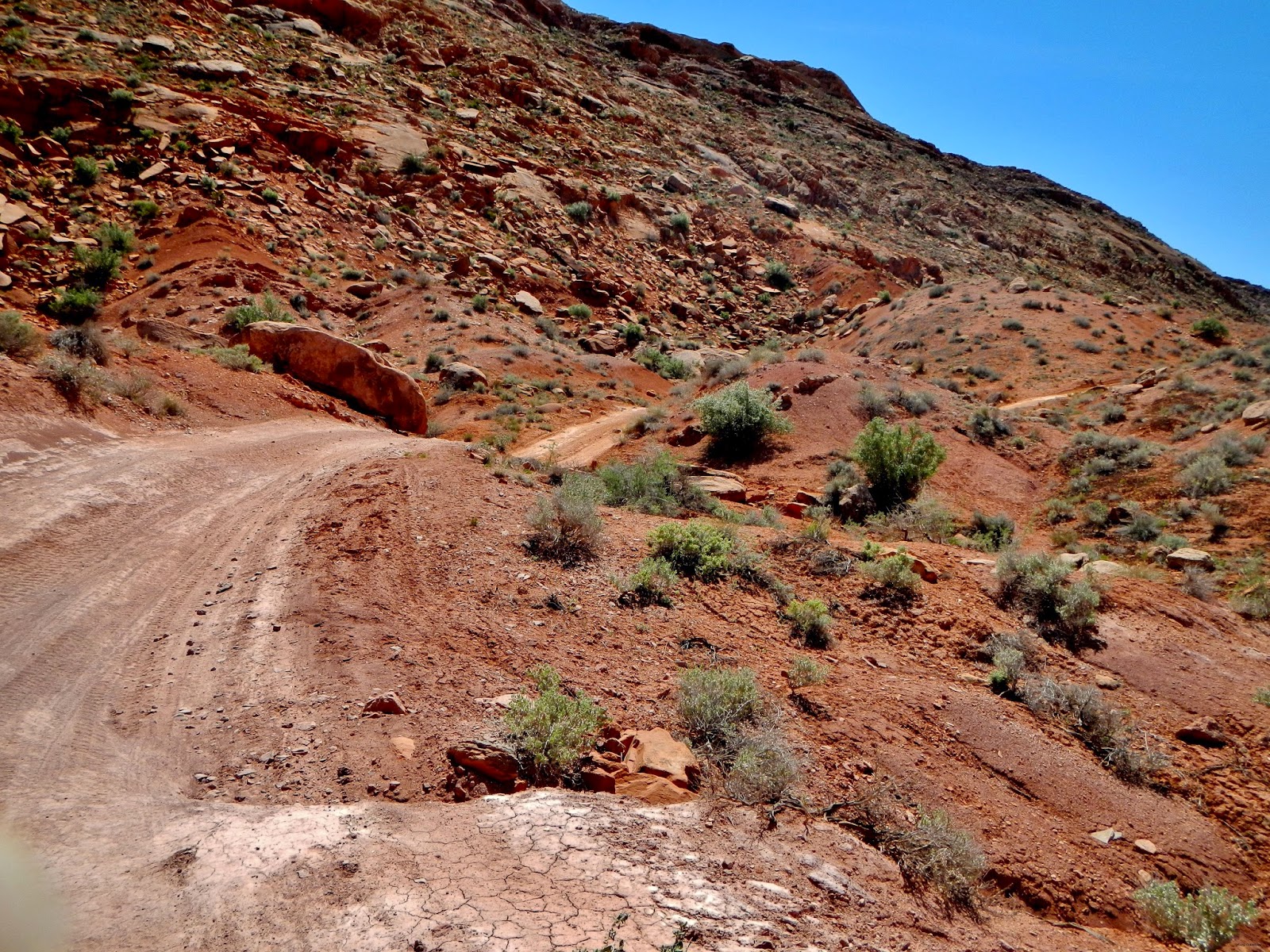 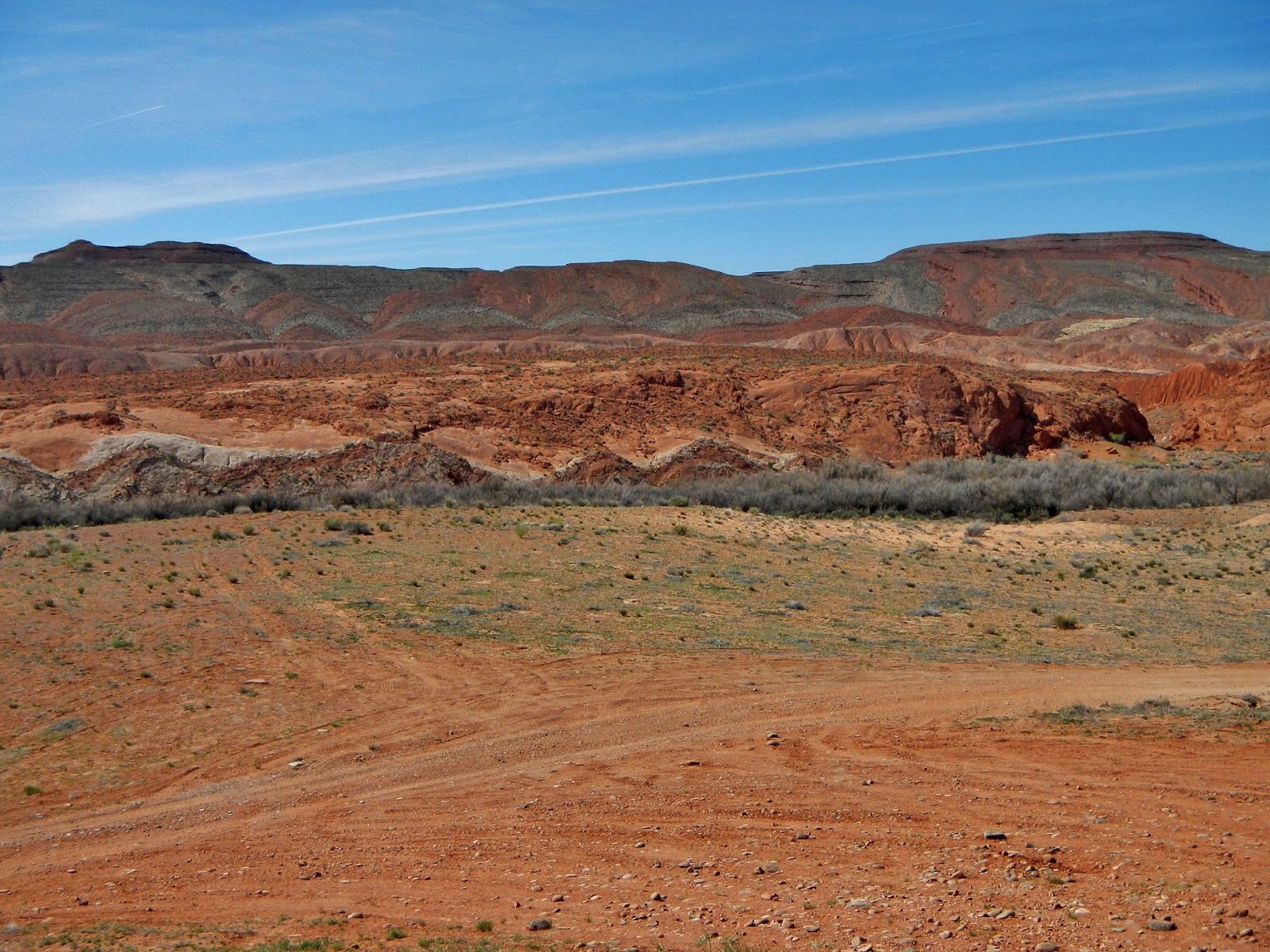 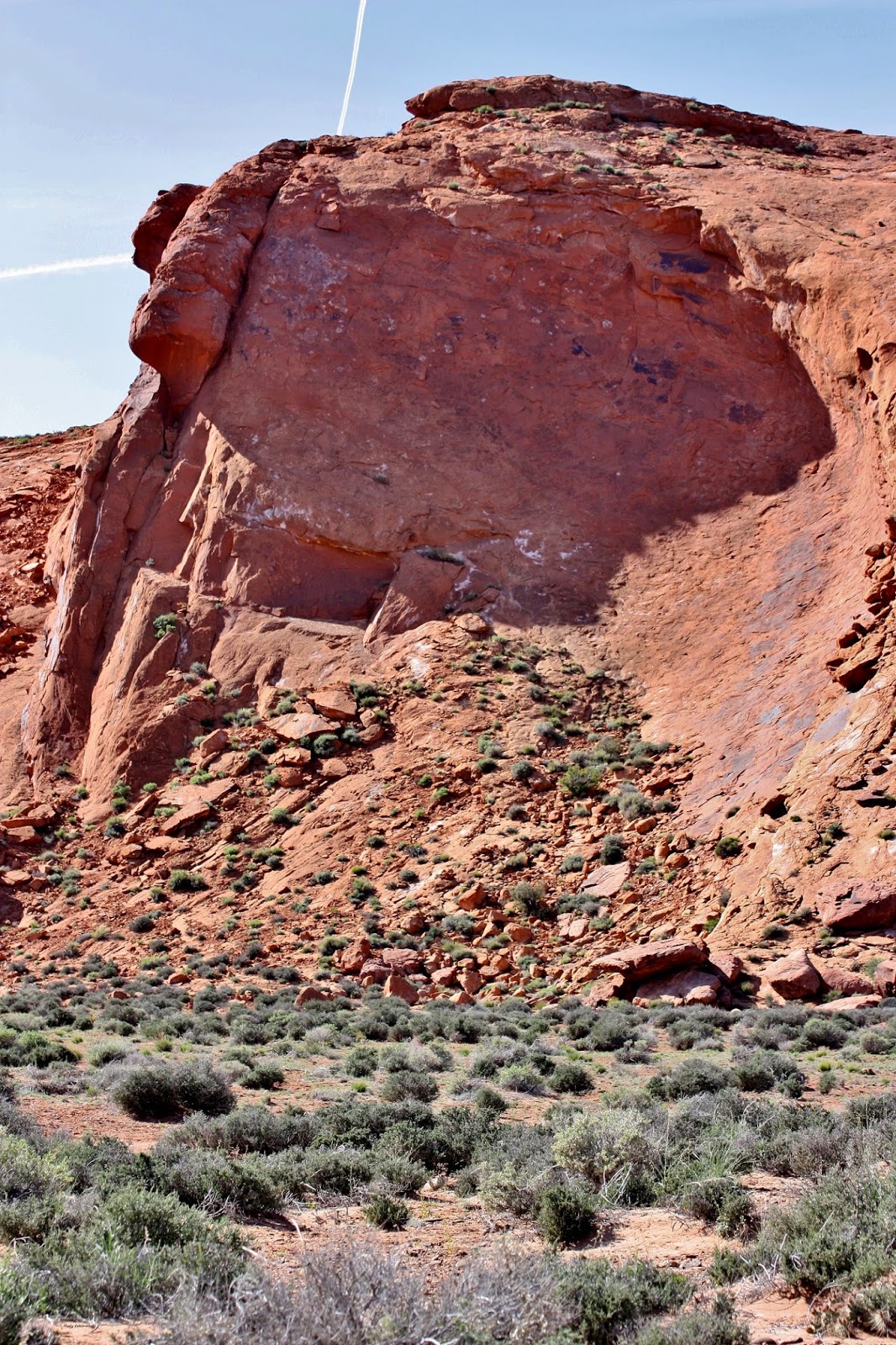 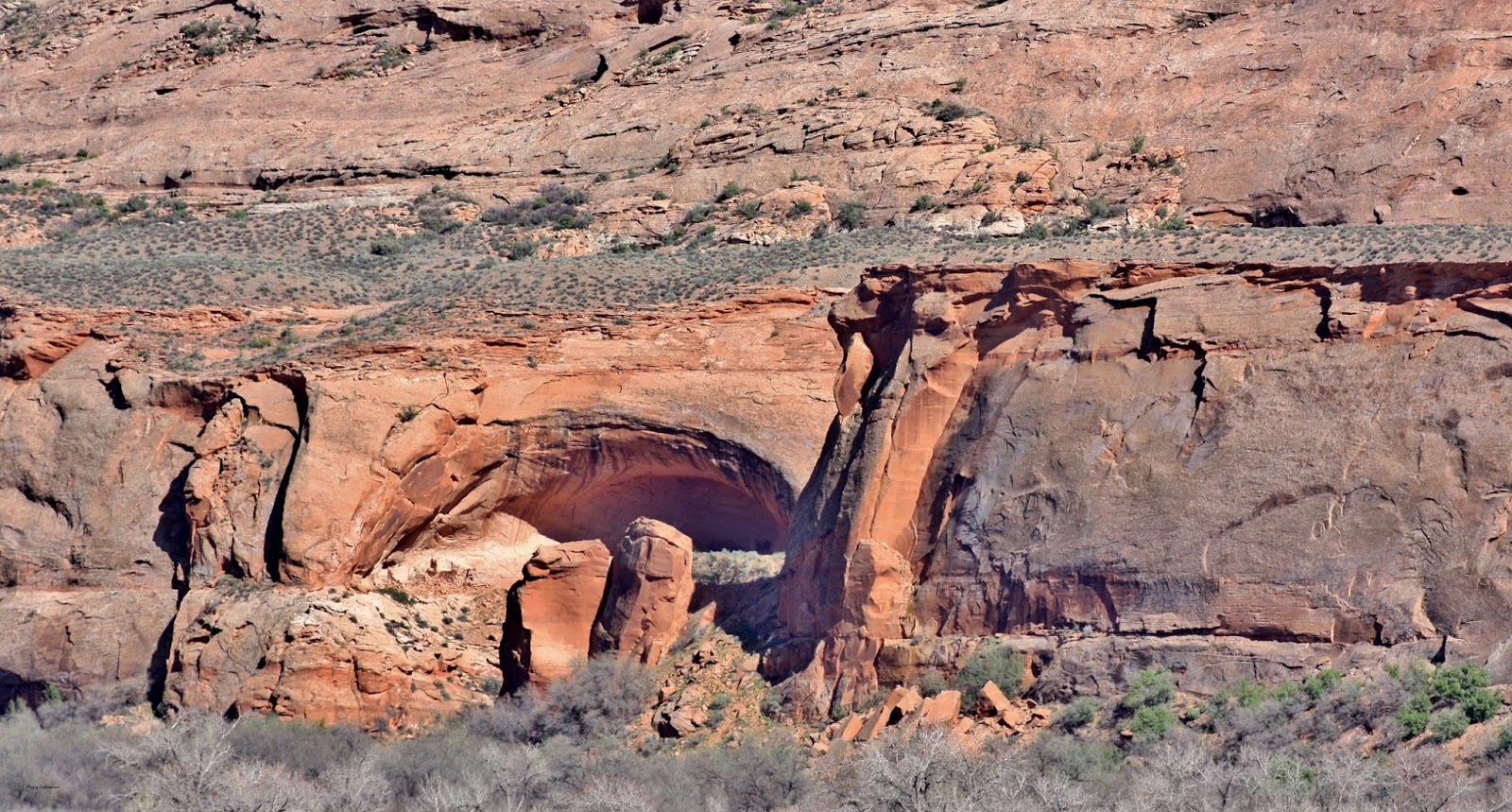 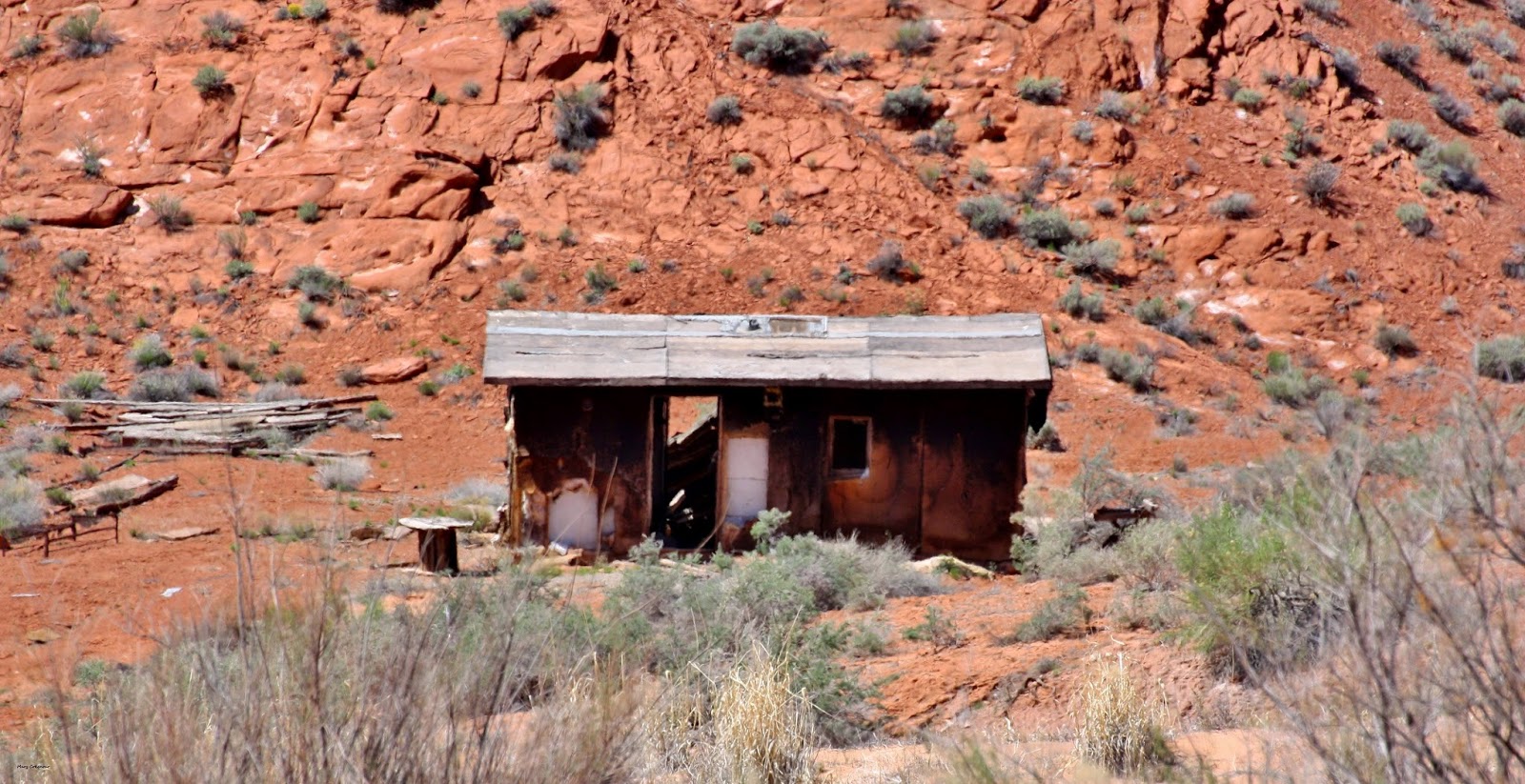 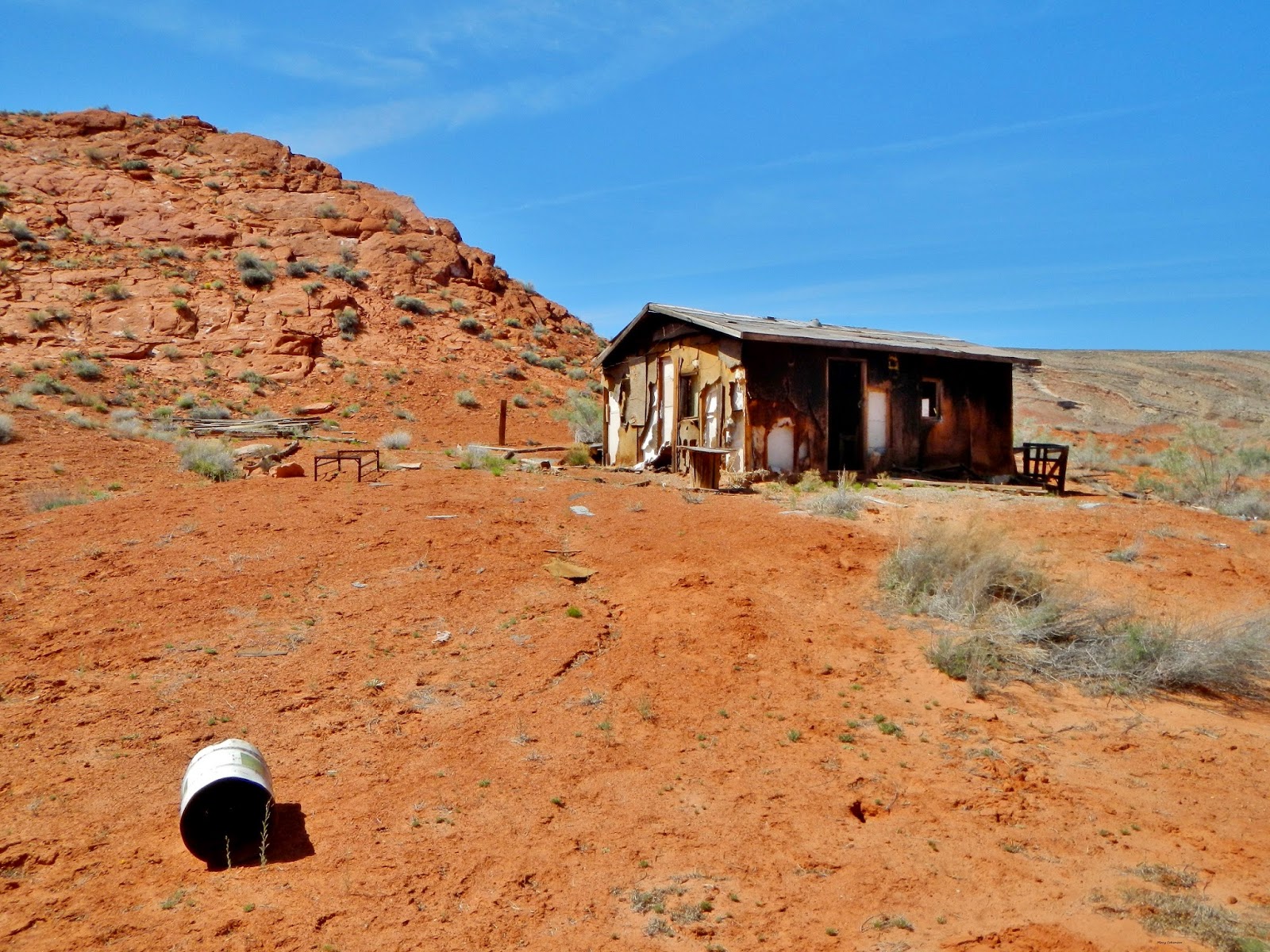 At 1.8, a trail to the right will take you to an abandoned ranch; no idea who had lived there, nor when.  Many items on the property indicate it was occupied during the latter part of the 20th century. 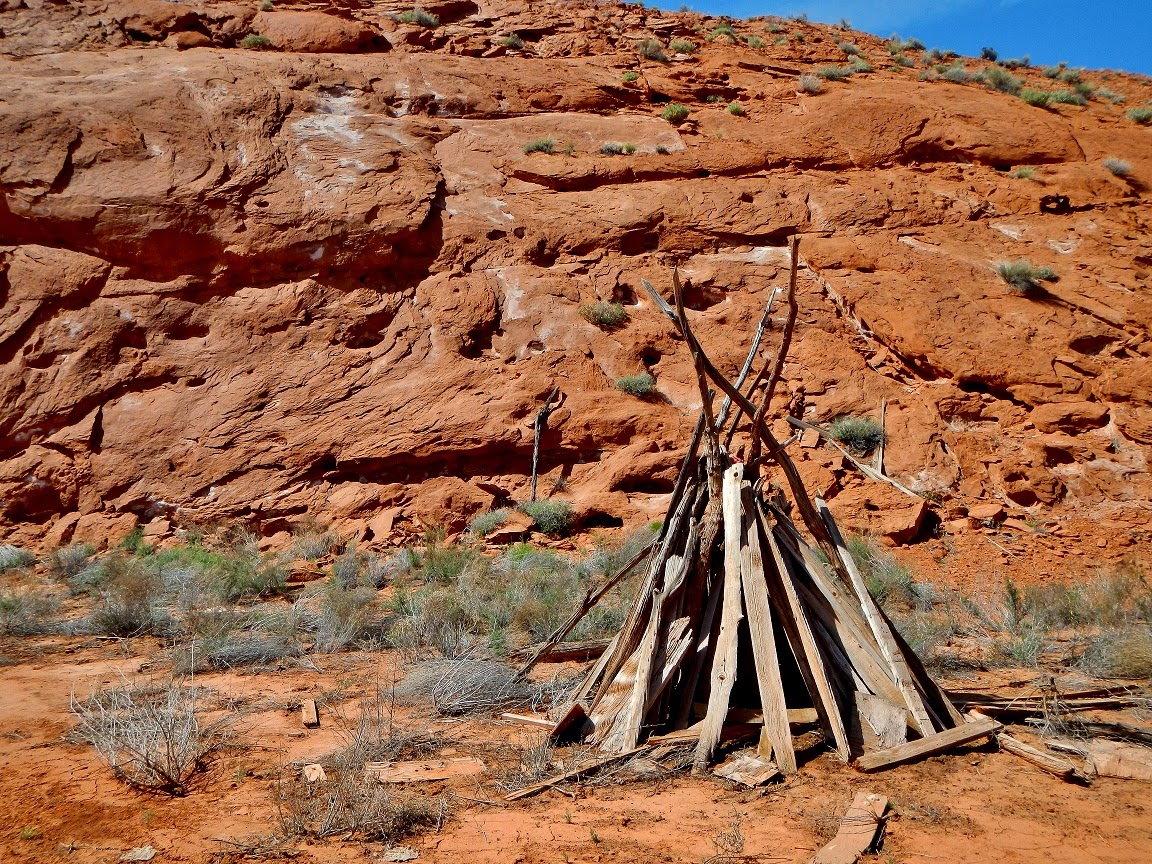 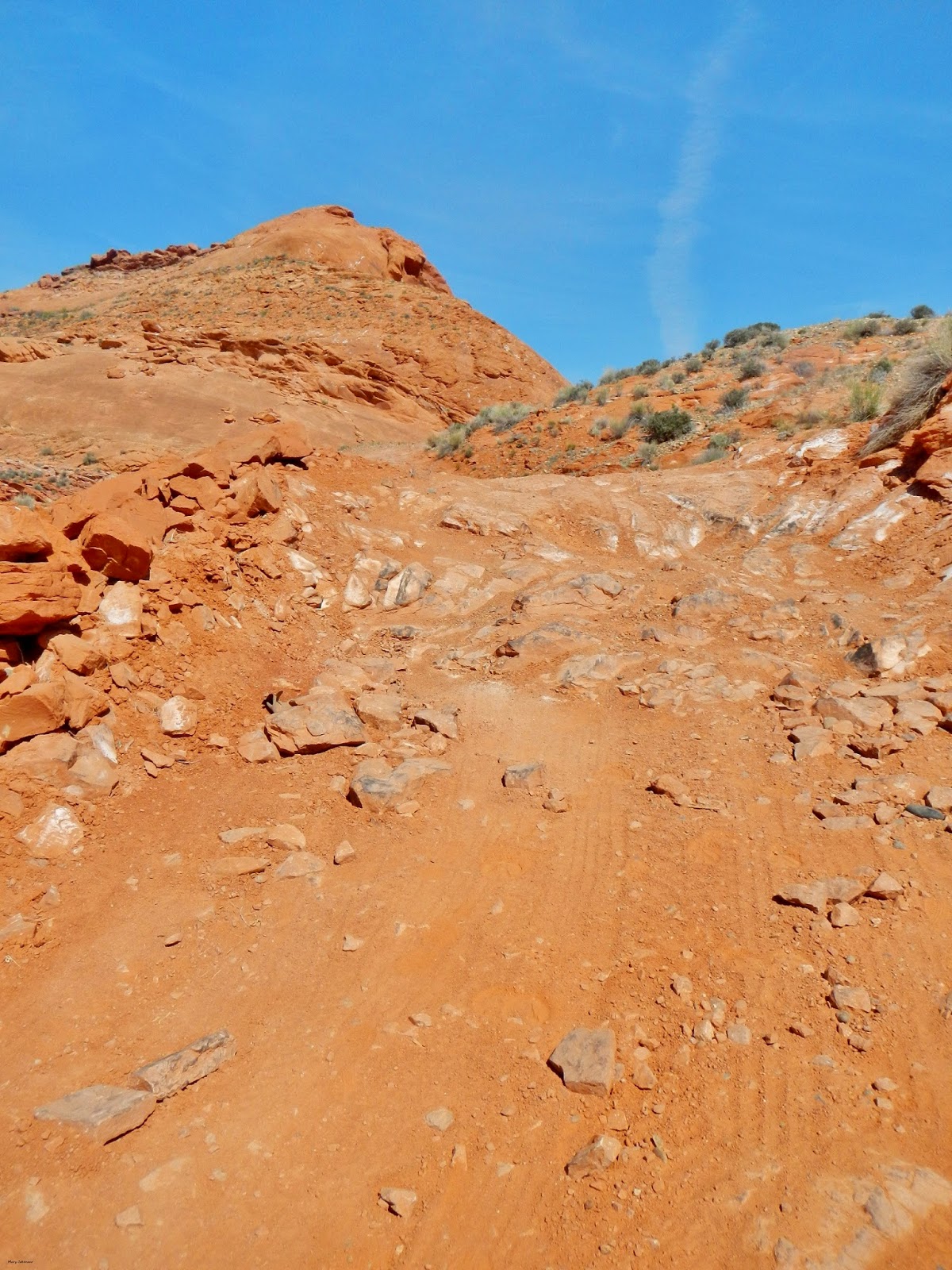 Now here comes the not so fun part; after about 4 miles we came to another divide in the trail; the one to the right leads down to the San Juan River and ends.  The trail to the left, well, it's not as simple as "it can be climbed, but be careful".  The sandy trail now turns into pure stone; a series of uneven "steps" going upward that could cause an unequipped vehicle to have only two wheels on the ground at some points...there is a potential for tipping over.  We parked off to the side, and began our hike upwards. 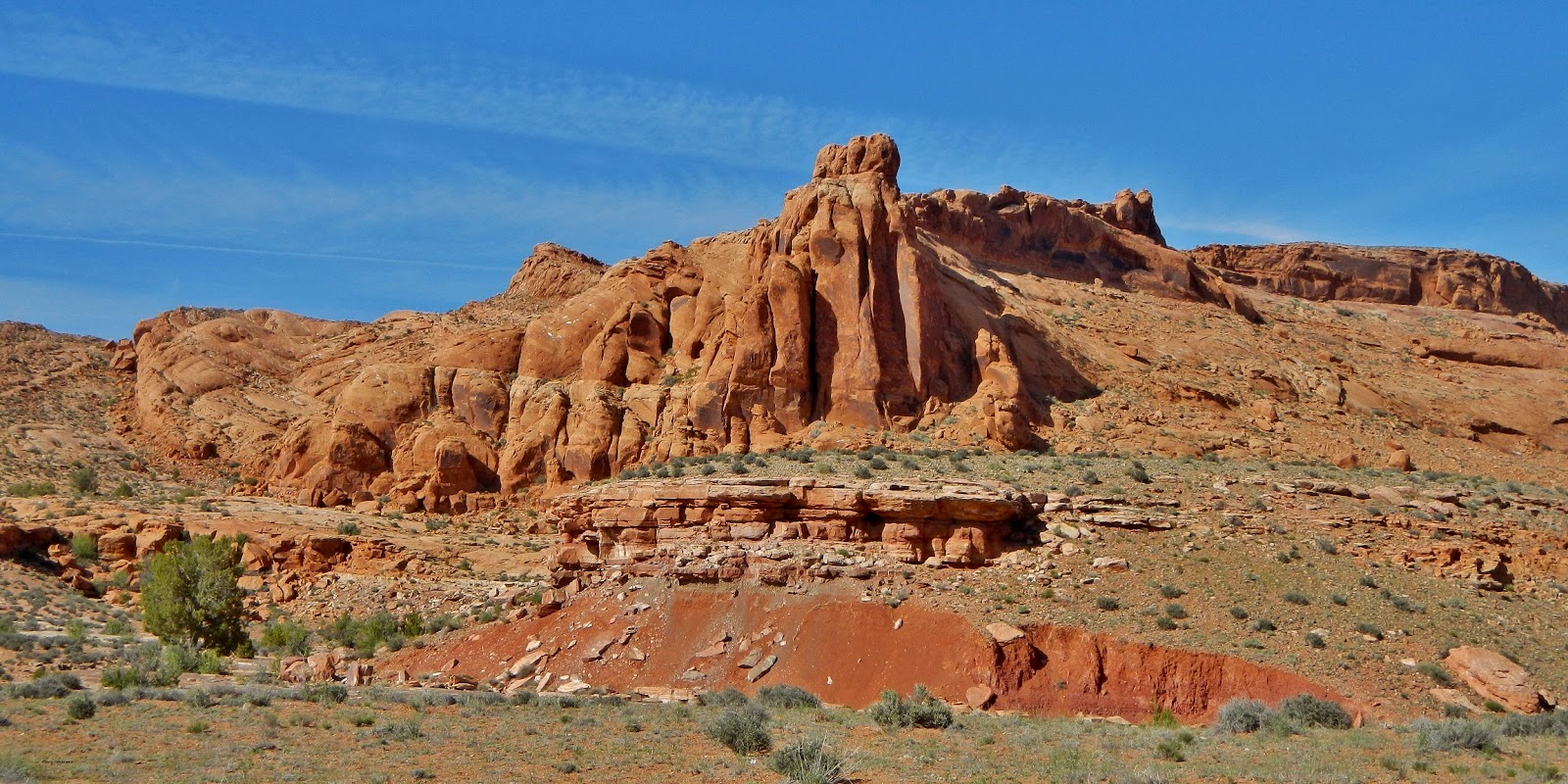 Walking down the path, we came to one of the pioneer posts; this one was at the trailhead that led to San Juan Hill.  Remember when the pioneers decided Navajo Spring was not an option for going over Comb Ridge?  Well San Juan Hill is where it finally happened; you can hike to it and see the trail the pioneers actually traveled.  We, however, decided to take the path that led right and down to the San Juan River. 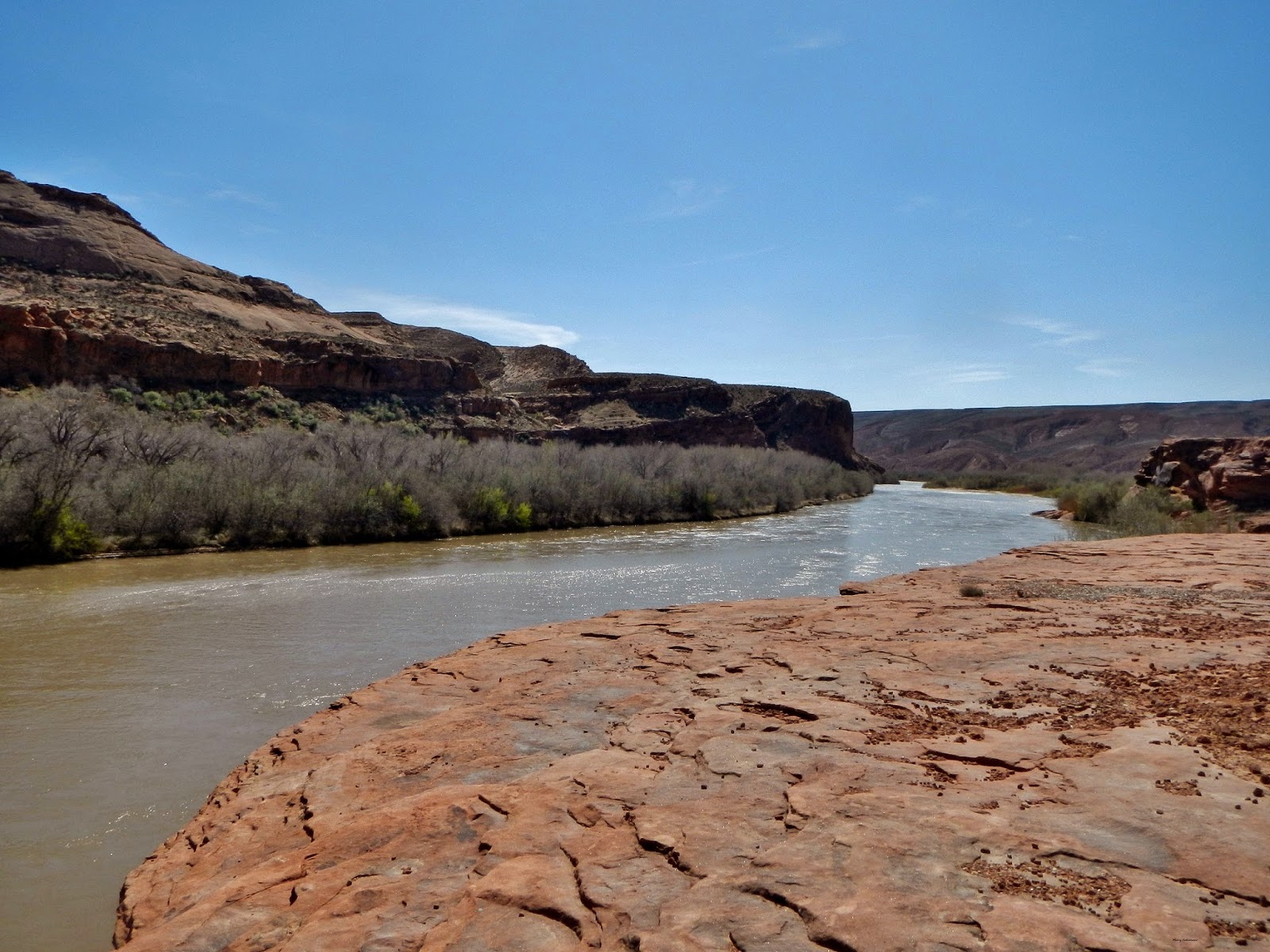 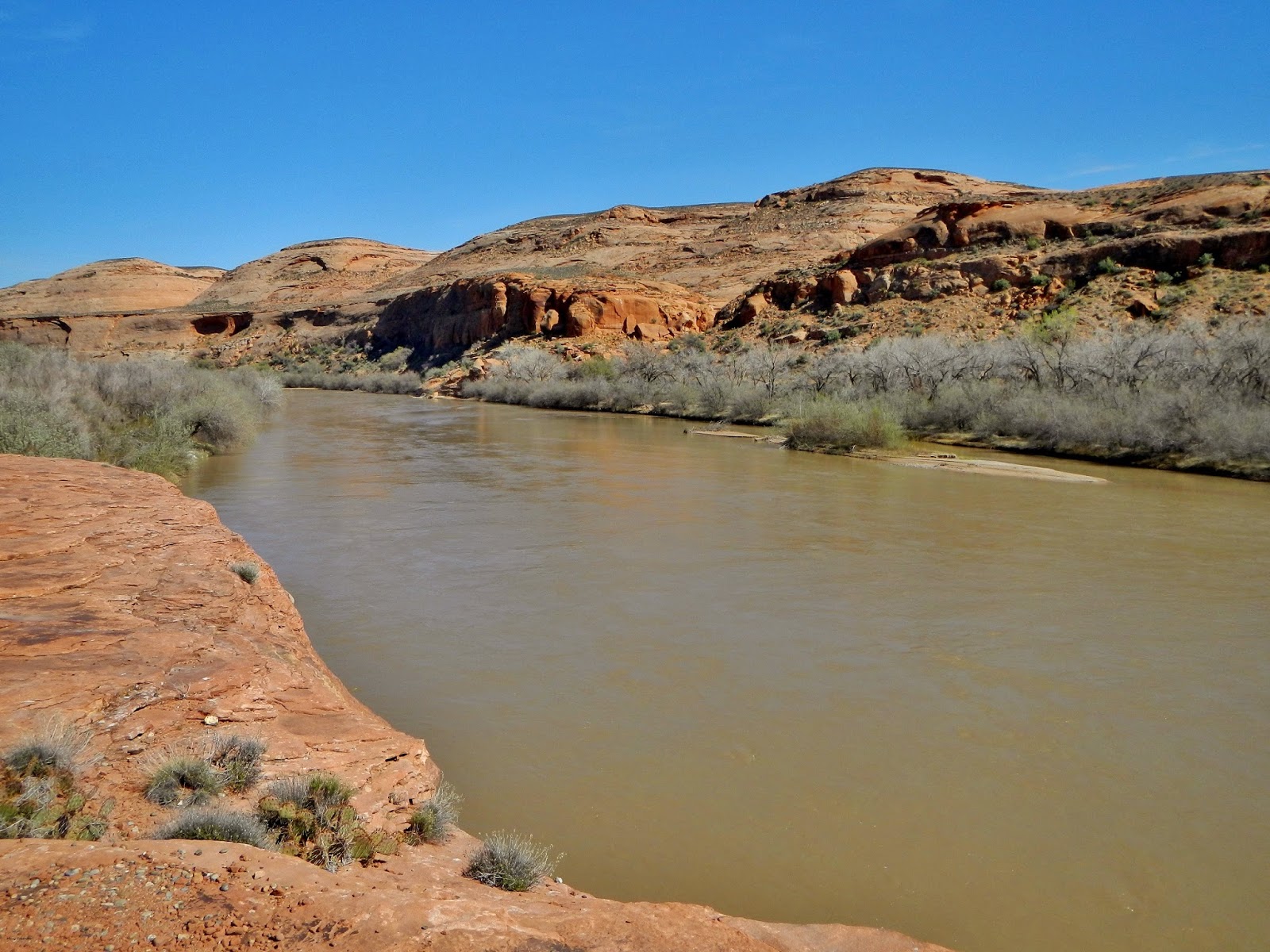 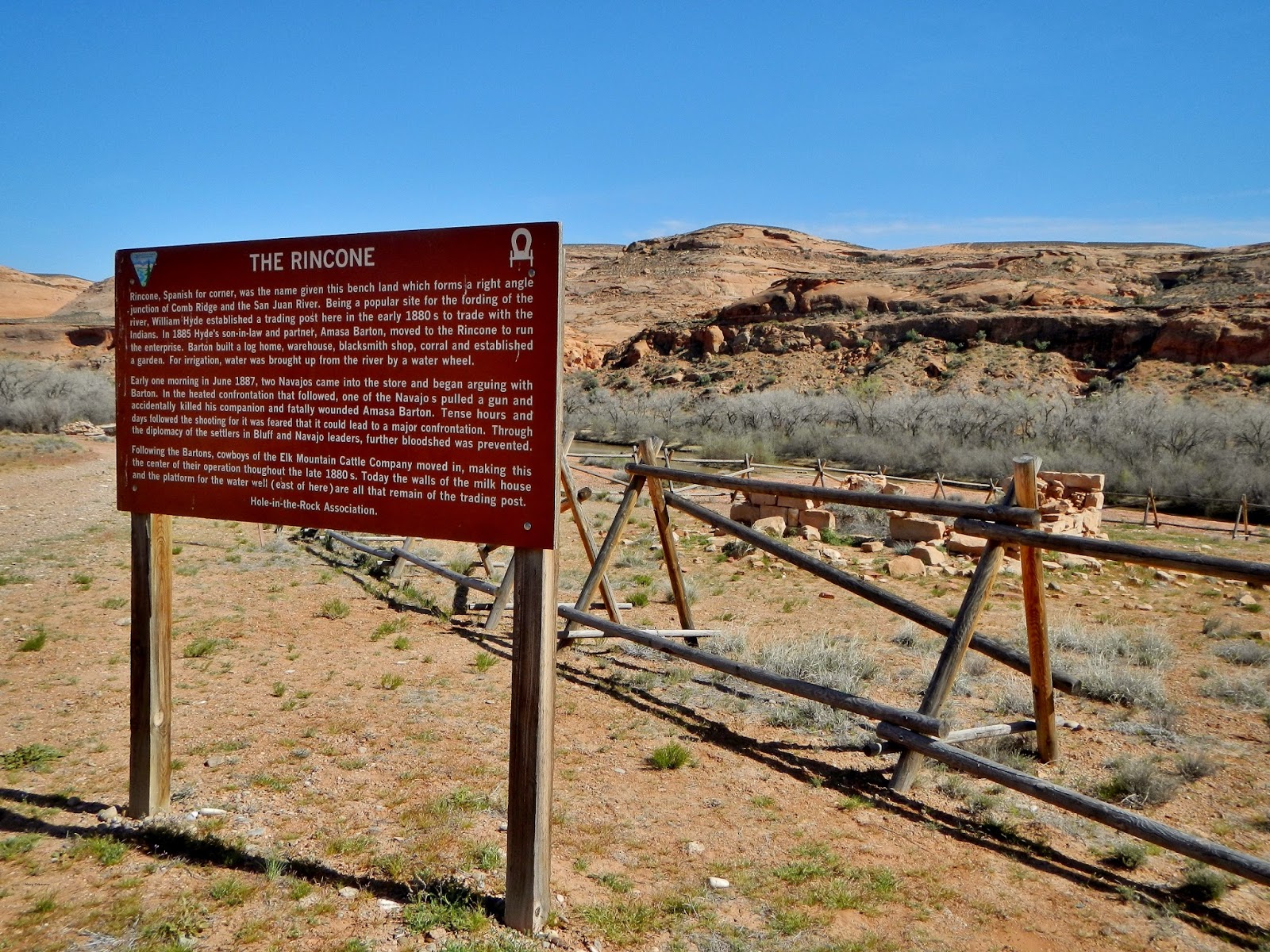 Down by the river are the remains of the Rincon (e) Trading Post; depending on which publication or website you look through, sometimes it has the "e", sometimes not.  Established in 1880 by William Hyde, he later on partnered up with the Bartons.  If you want to read the interesting history pertaining to the Rincon, I highly recommend the book, "Comb Ridge and its People" by Robert S. McPherson. 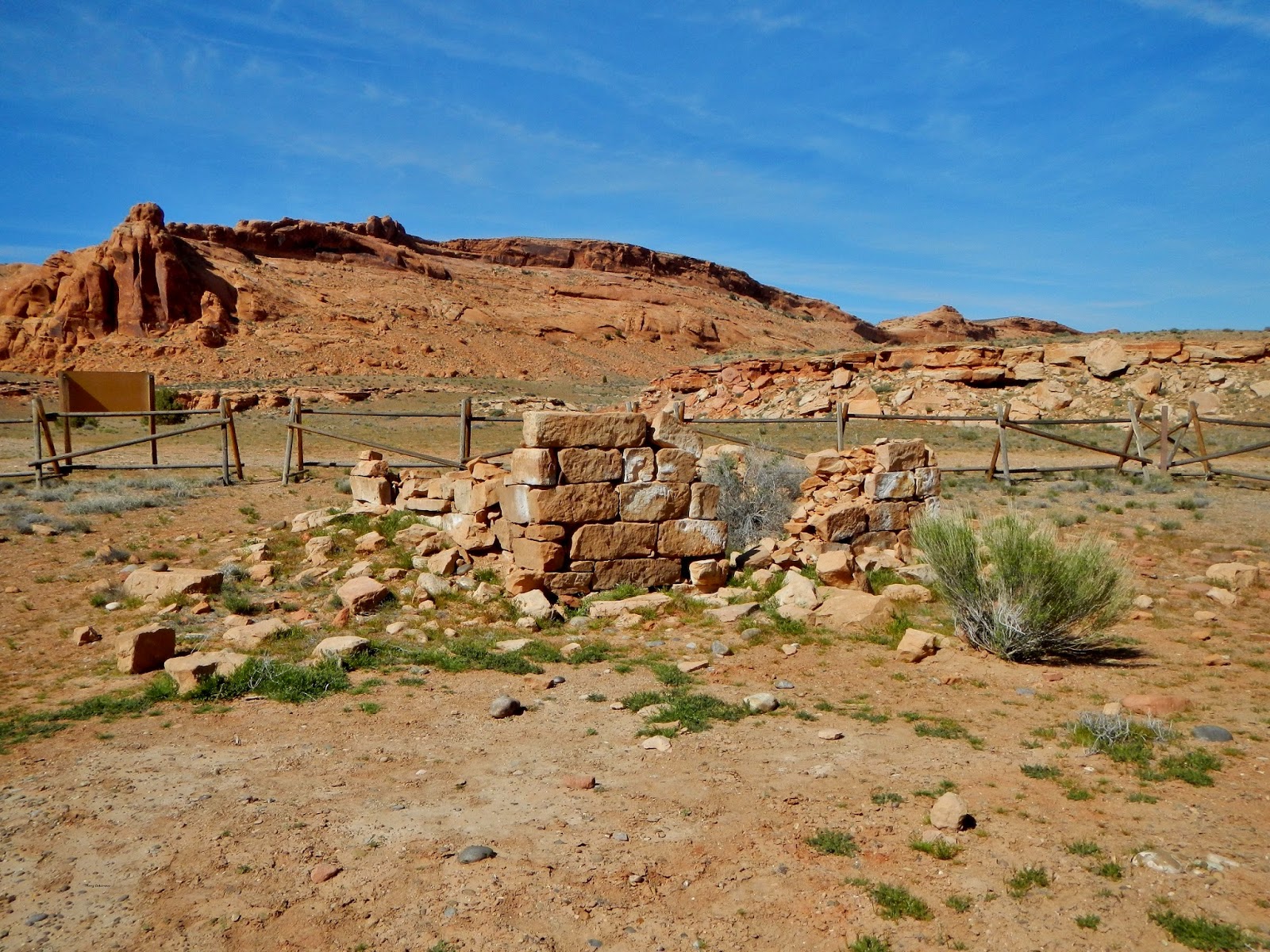 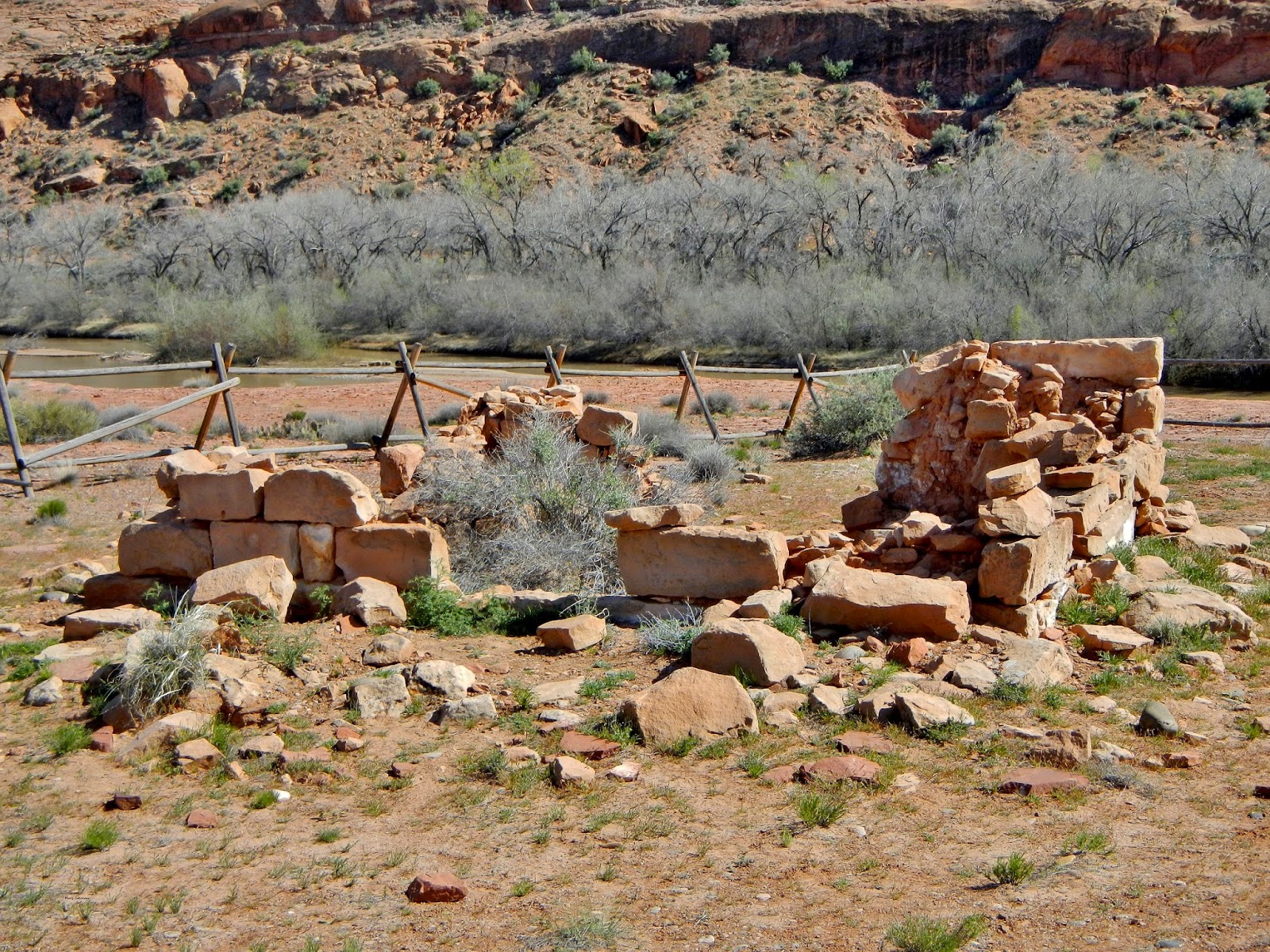 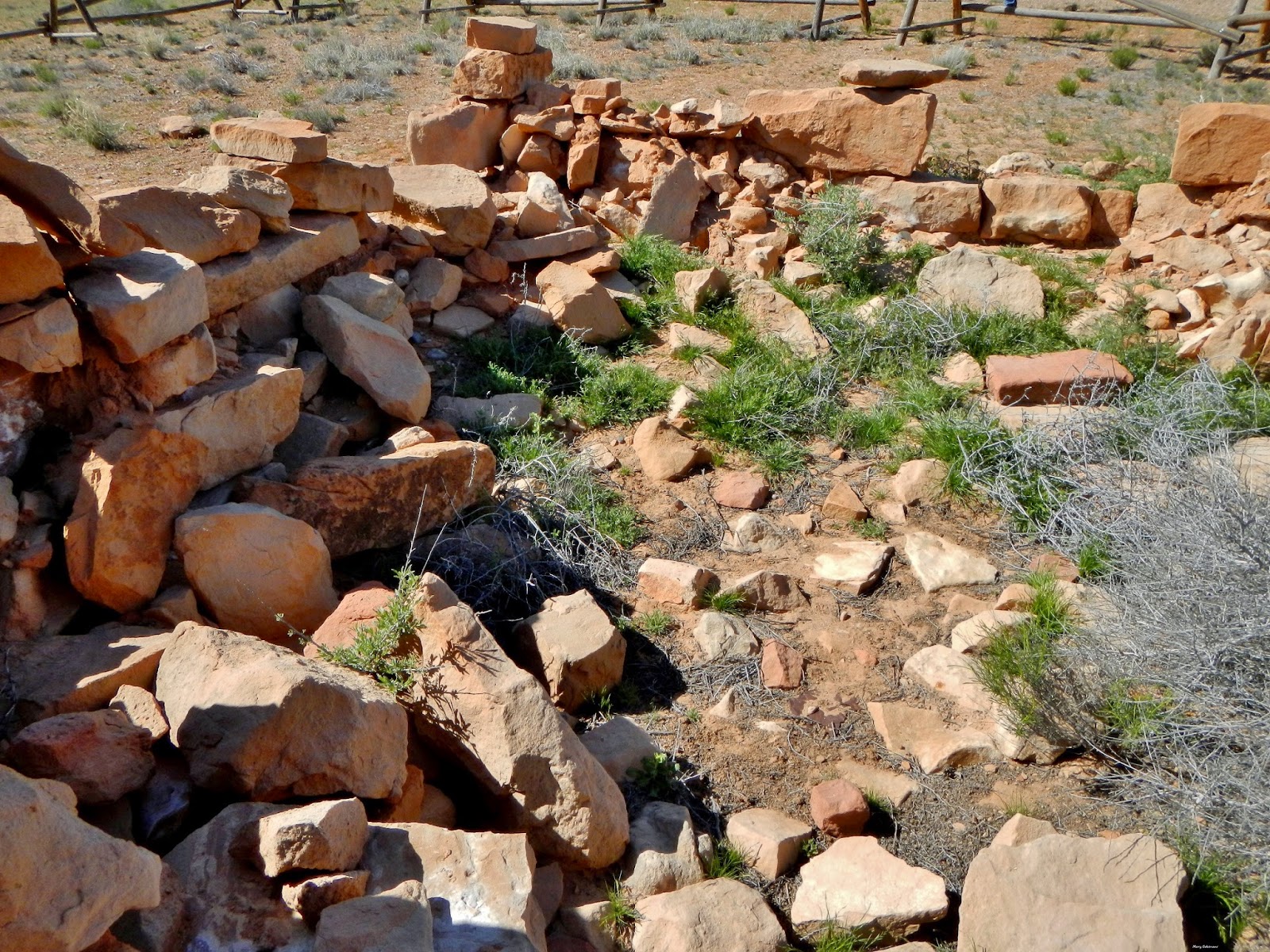 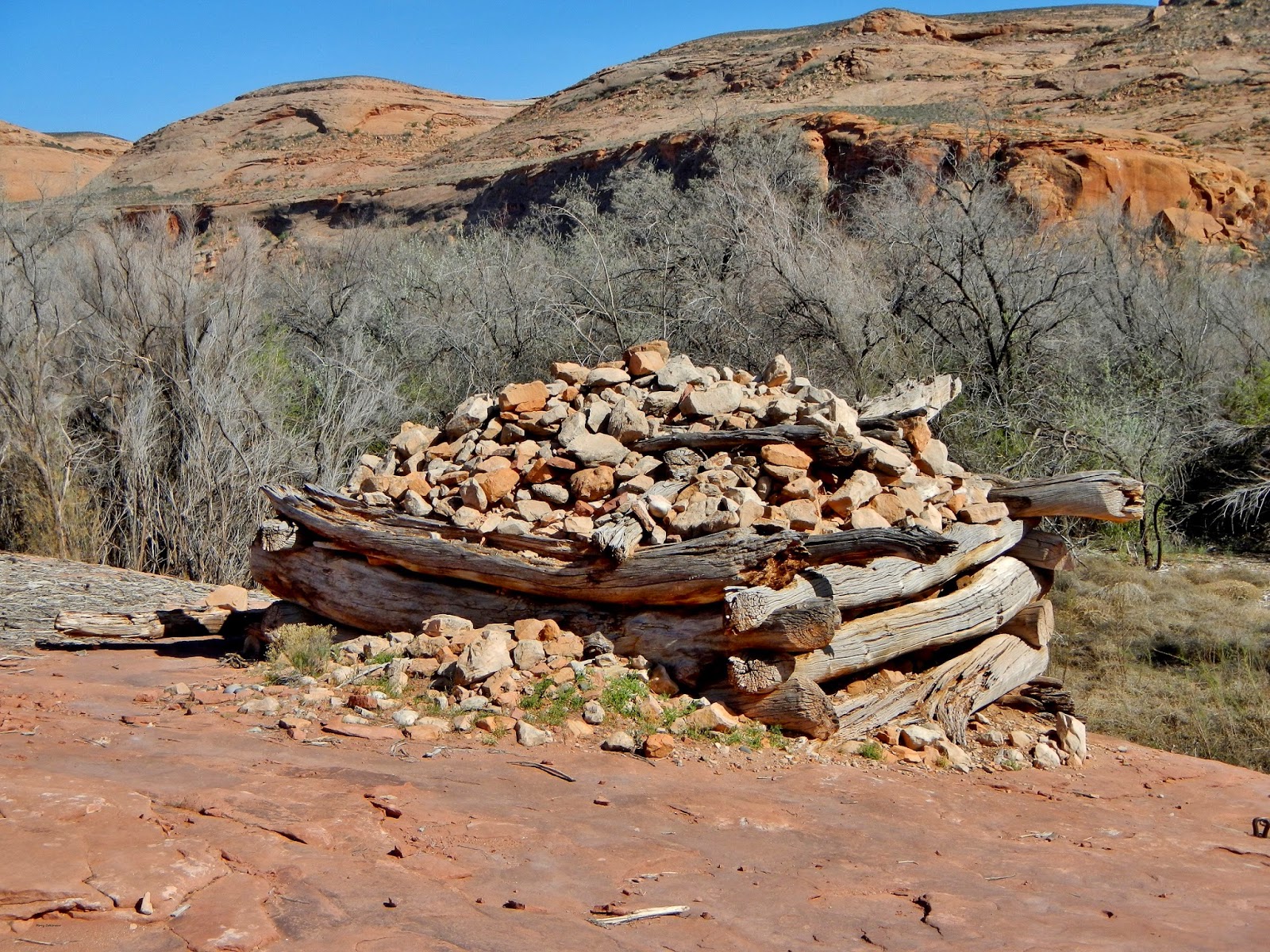 Following the trail along the river, we came upon a cottonwood log and rock cribbing which served as an anchor for a water wheel, and ferry.  In the distance we spied the River House Ruins; just then we came upon a pair of hikers who were camping at the ruins, and told us that we had another two miles to go. 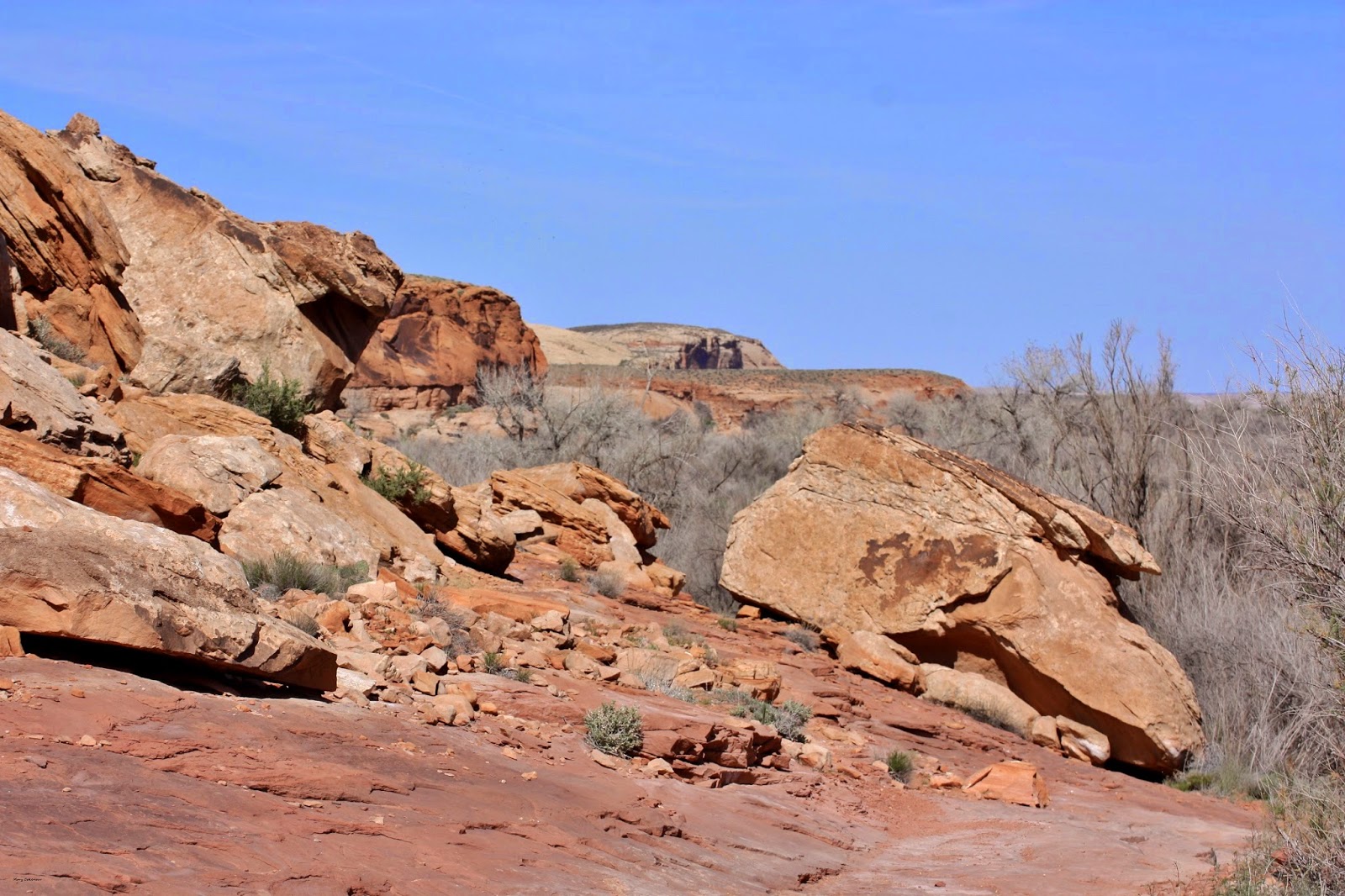 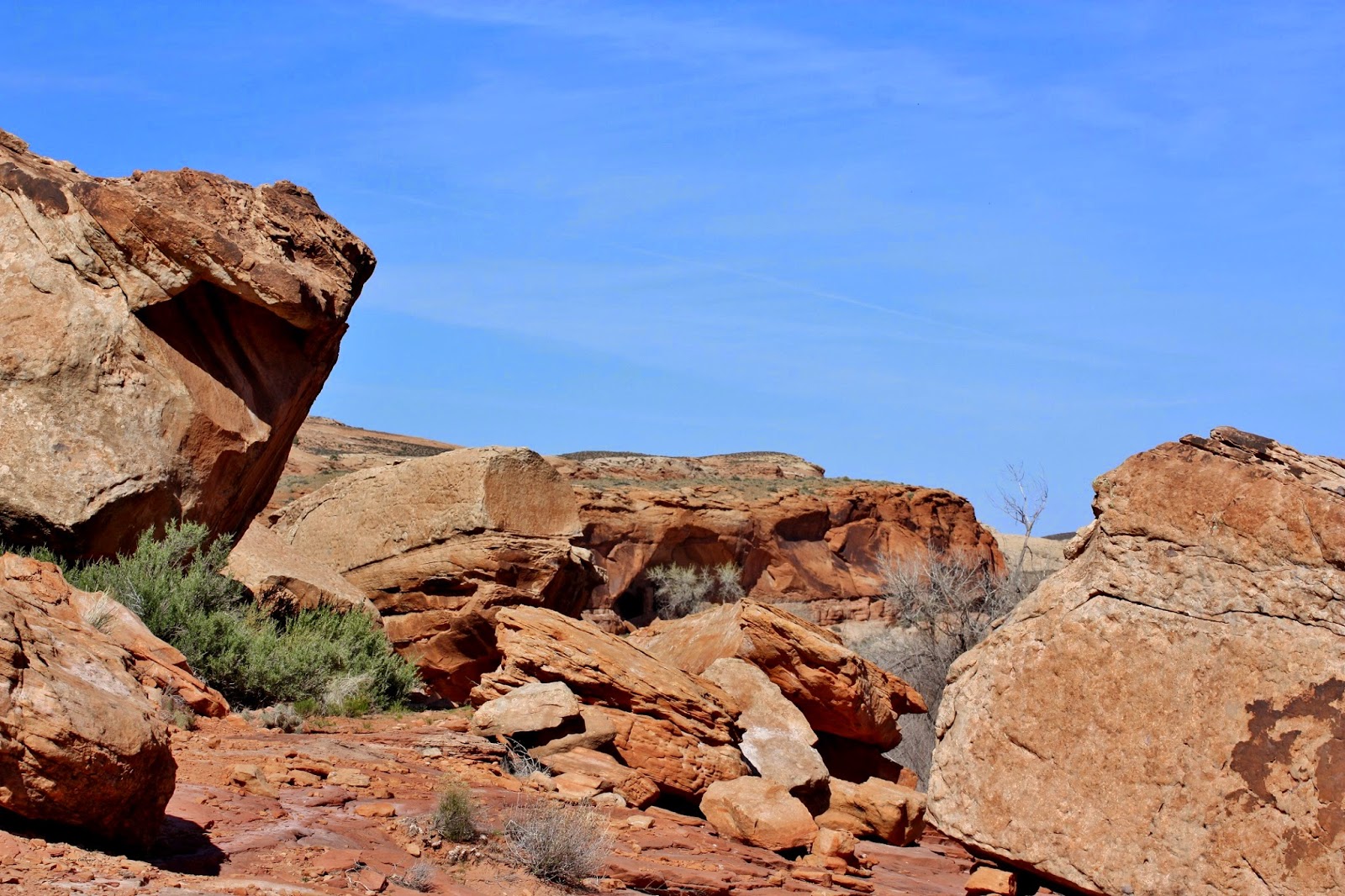 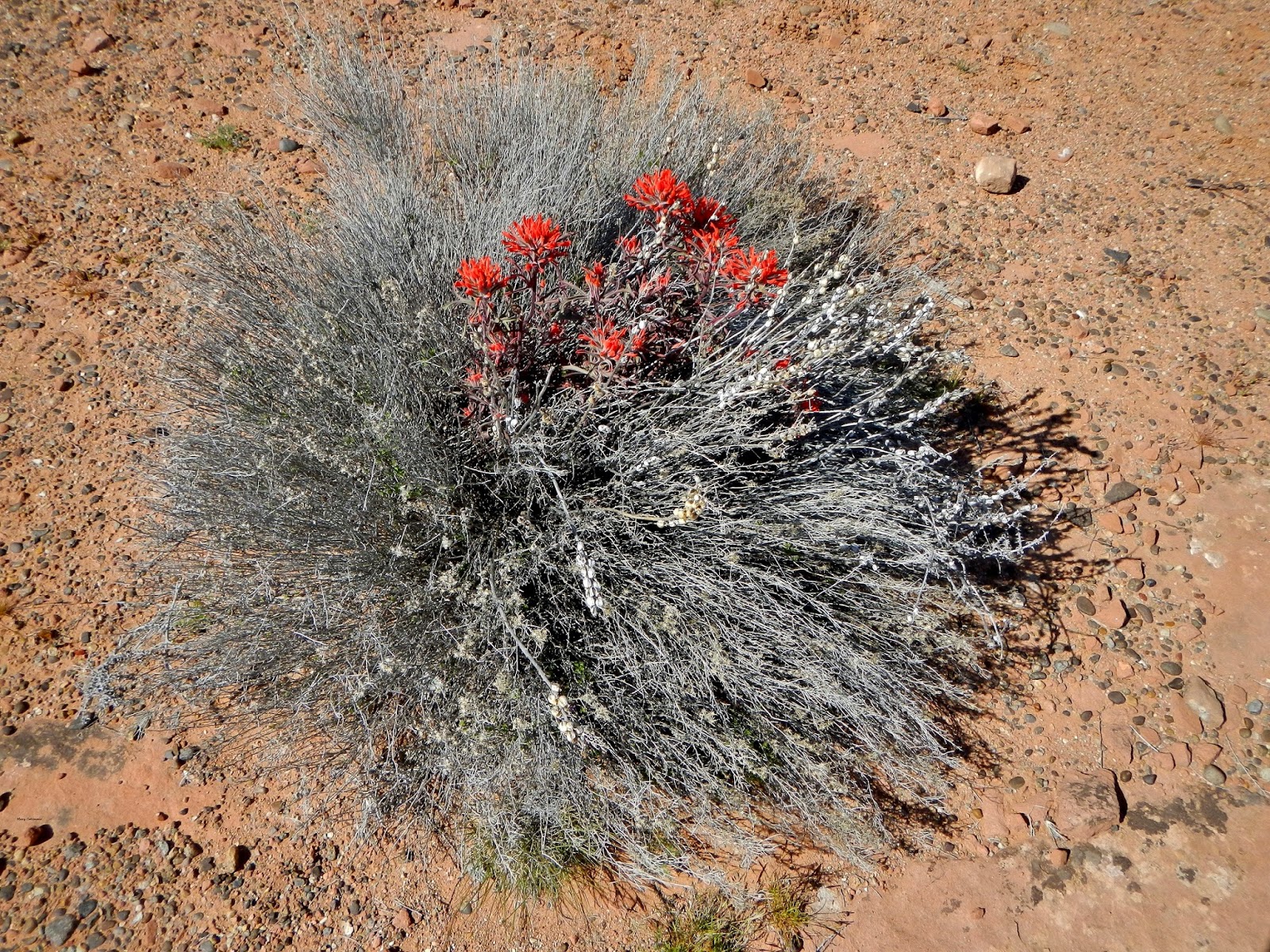 By this time, we'd already walked two miles and found ourselves unprepared for another two miles...four miles one way, eight miles round trip.  So much for following the information we had from the BLM and Bluff brochures; disappointed, yes; determined to come back and try again...definitely!!!  Back to the vehicle we hiked, just enjoying the soft breeze and the scenery around us.  As a farewell, a lone raven flew along the sandstone walls. 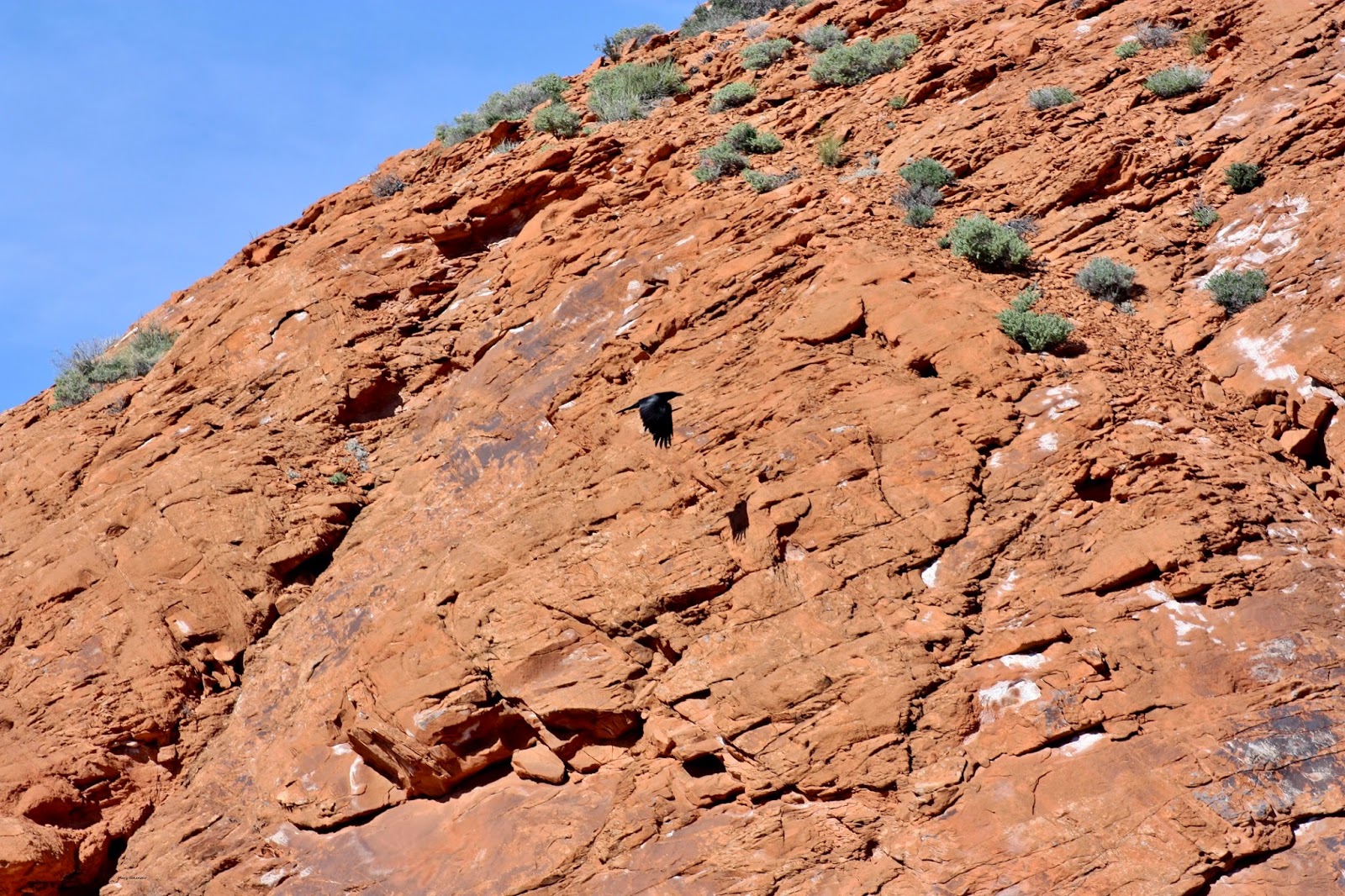 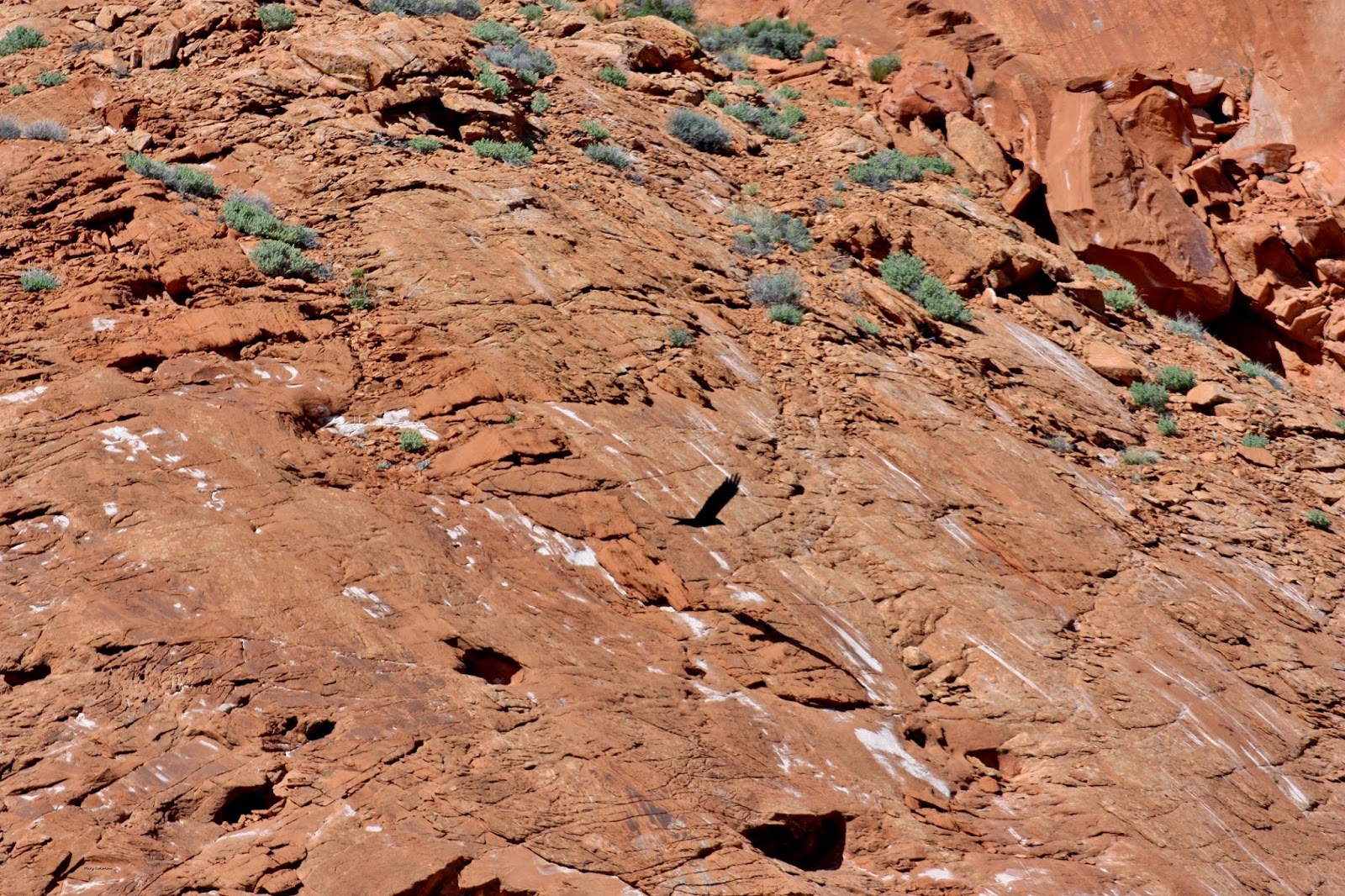 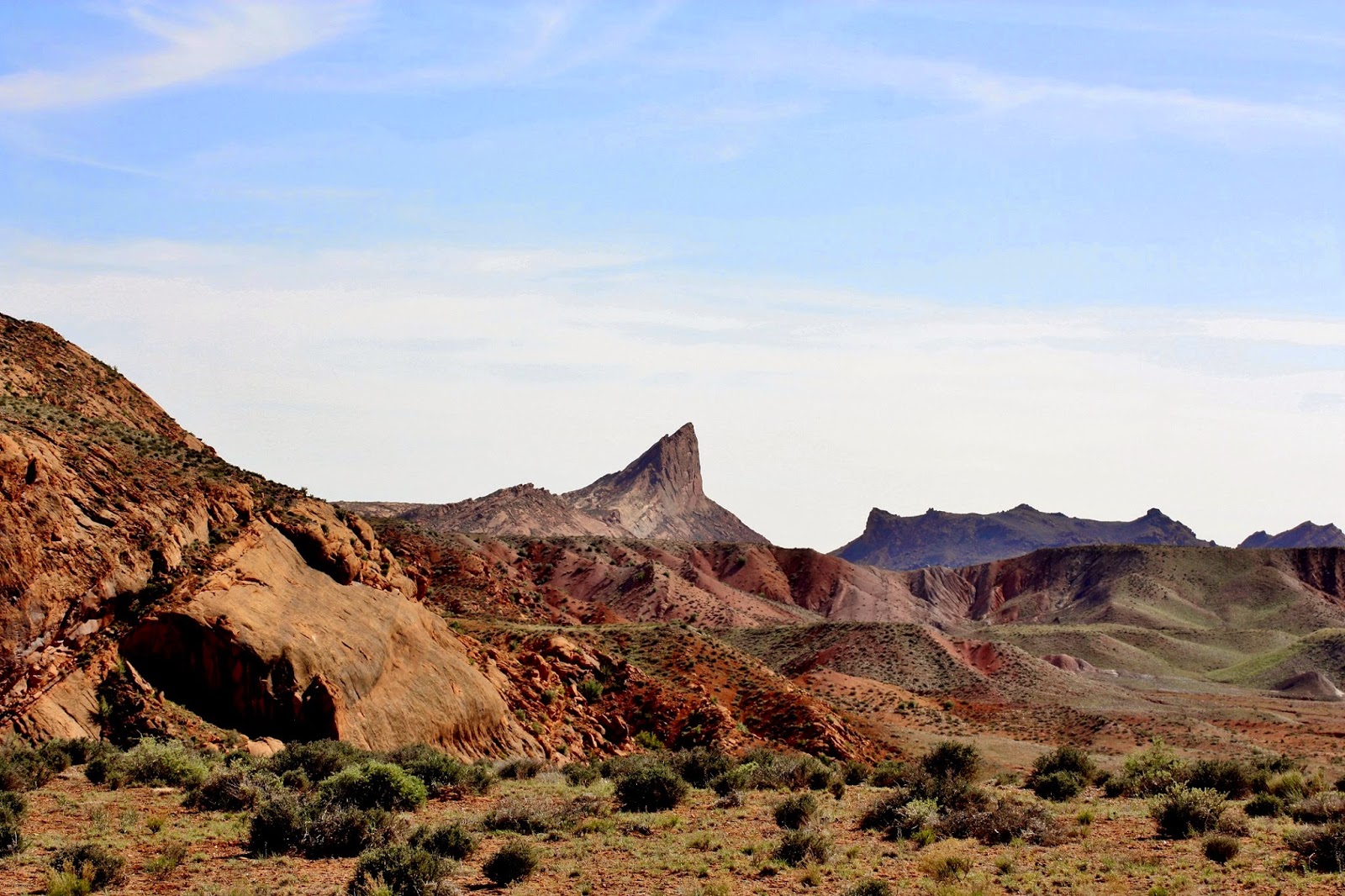 There is a point of interest that you will see, in the distance, as you make your way to this area...Mule Ear.  The Navajo have a legend concerning this pointed outcropping of Comb Ridge, and it is referred to as "Designs on the Rock", "Decorated Rock" or the lesser known, "Decorative Metal Arrowhead".  First Boy, one of the "Twelve Holy Beings" used an arrowhead to tear this piece of rock (Mule Ear) from the earth. 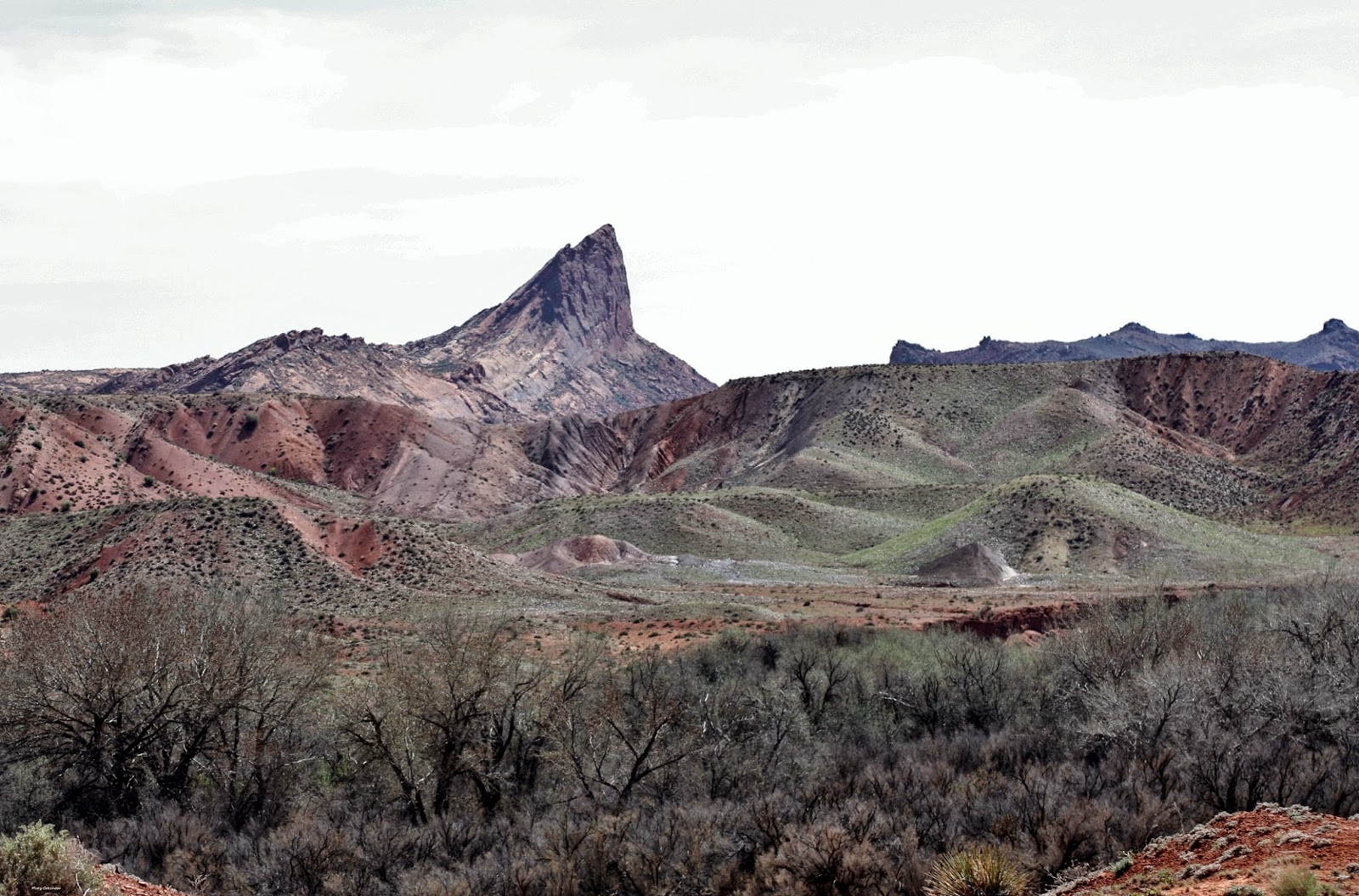 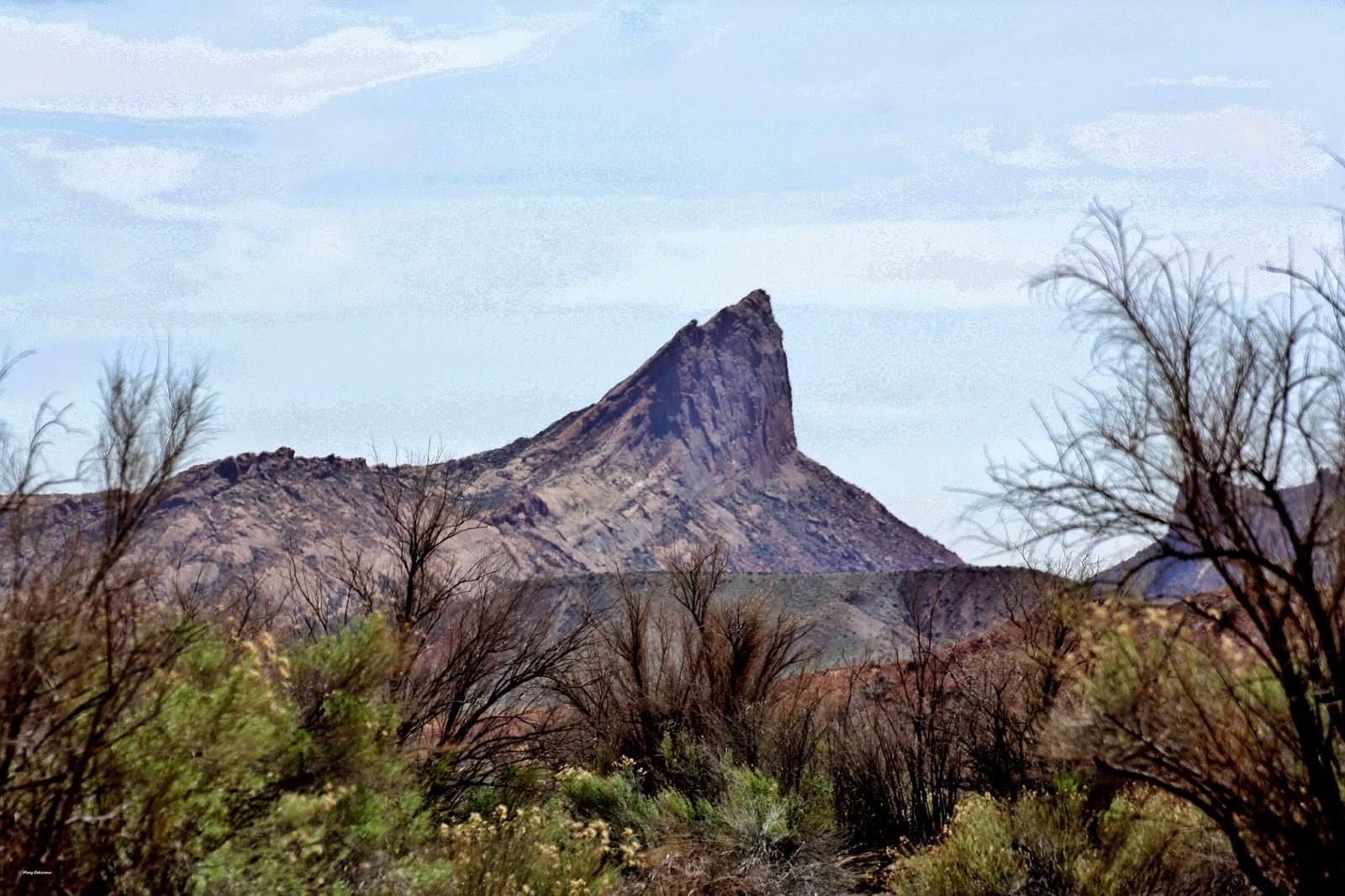 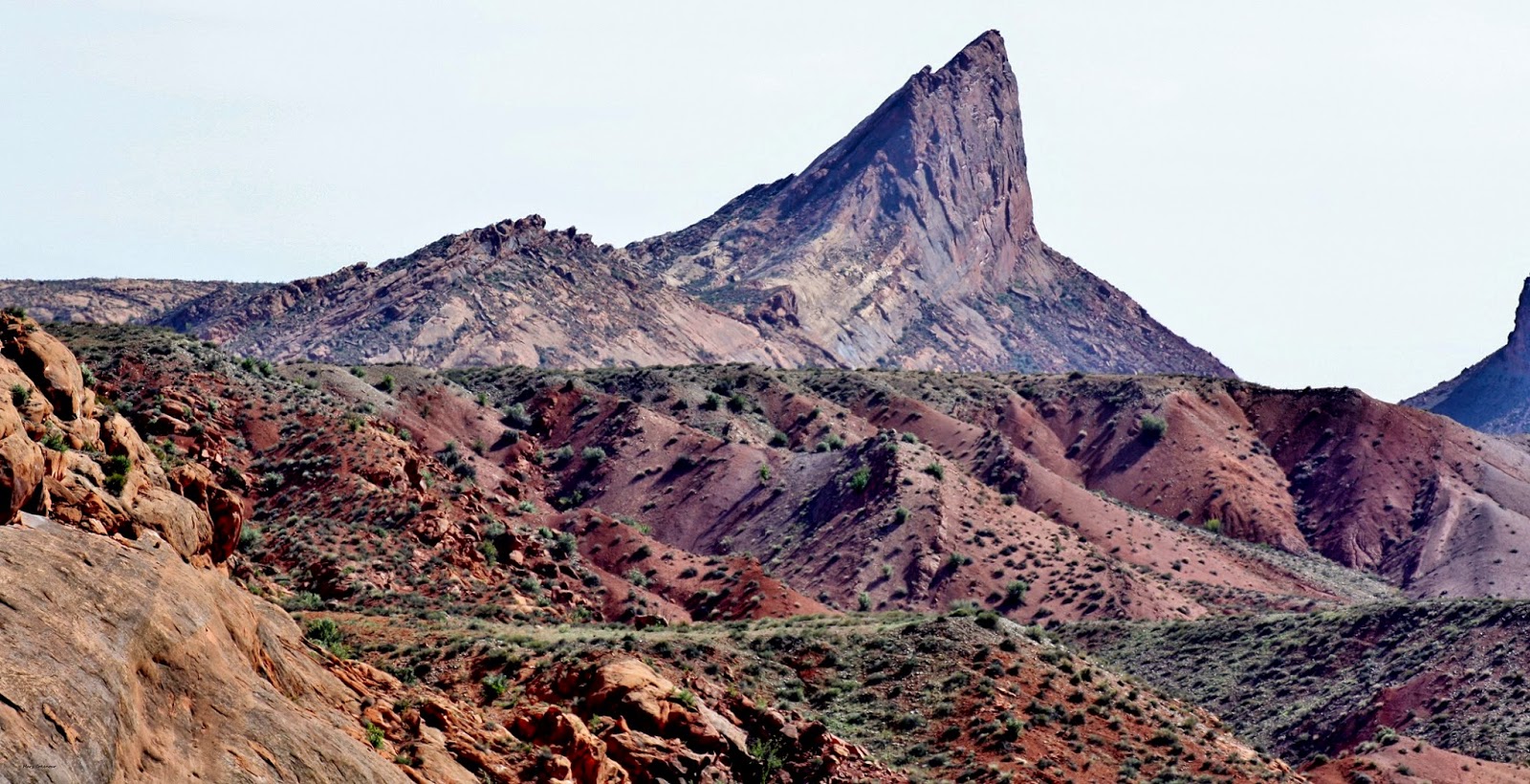 ...and that concludes this adventure along part of the pioneer trail.  We had a great time, (yep, we remembered to bring a picnic), saw some incredible sites, and have a plan to come back again.  If a group of folks can do this trail with simple covered wagons and horses, then why can't we?