This is about my little detour when I was traveling through Coal Bed Canyon on CR 341.  This is also about conquering fear of these canyon roads that are strictly for 4 wheel drive vehicles and ATVs.  On CR 372, there are areas on the road where you will stop and all you will see out your front windshield is the sky; you're practically parked vertical.  That's when you have to do some deciding; can't back down the road in reverse; can't do a U-turn; might have a cell signal, but who do I call for help; sit there and hope someone comes along; or the hell with it, drive and damn the torpedoes.  I chose the last option and am the stronger for it; pretty darned proud of myself too!  Alright, I'll admit it, I believe I'm becoming an adrenaline junkie from all this adventuring...and I like it!

Oh, don't confuse Monument Canyon with Monument Basin which is located in Canyonlands - Islands in the Sky; nor Monument Valley on the border of Utah and Arizona.

Anyway, I'll post the map, follow the bright red road on the right hand, central part of the map; I'll post a map of Colorado later, so you can follow the road back to Route 491, or you back track back to the 341/372 junction and decide where to go from there. 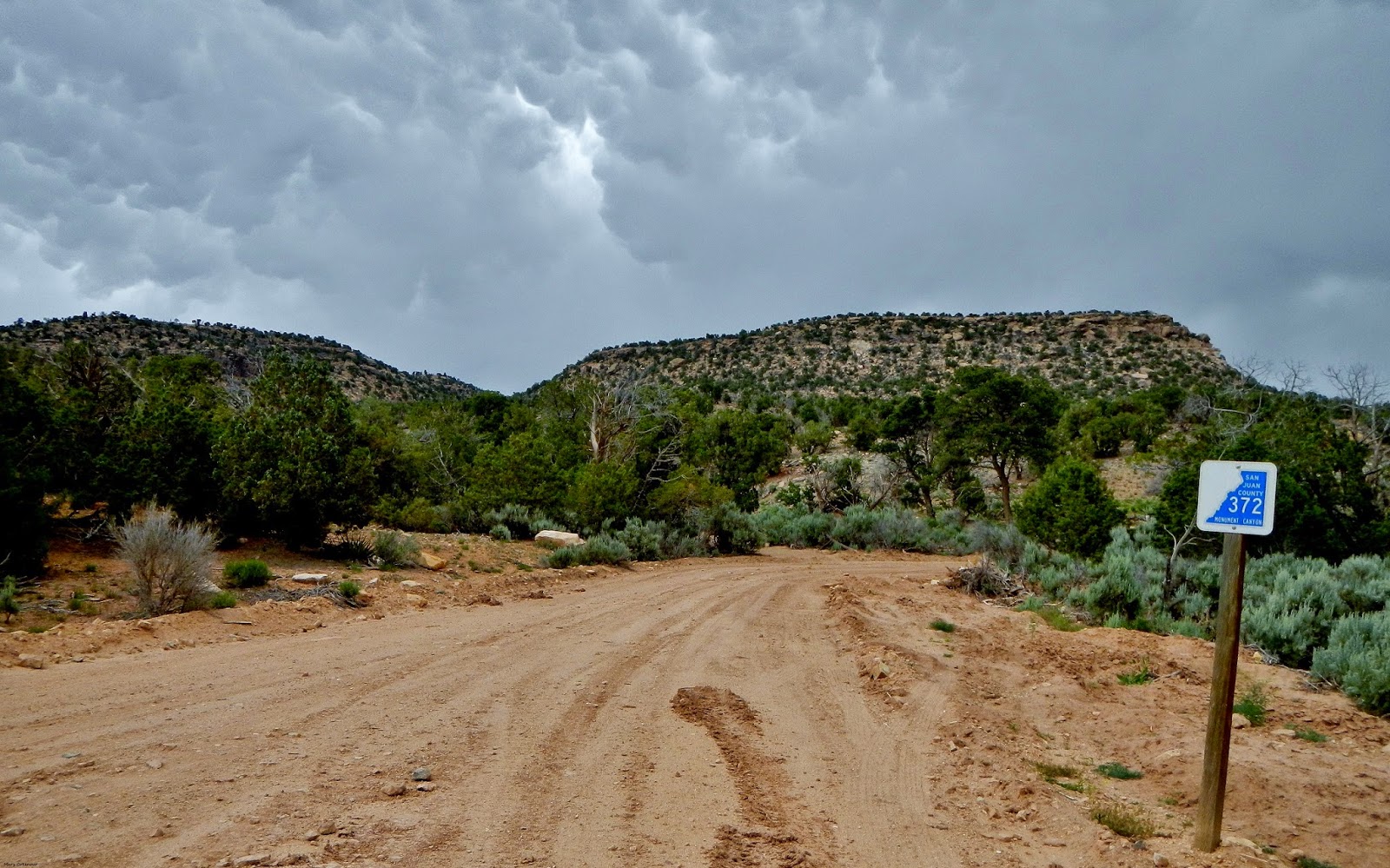 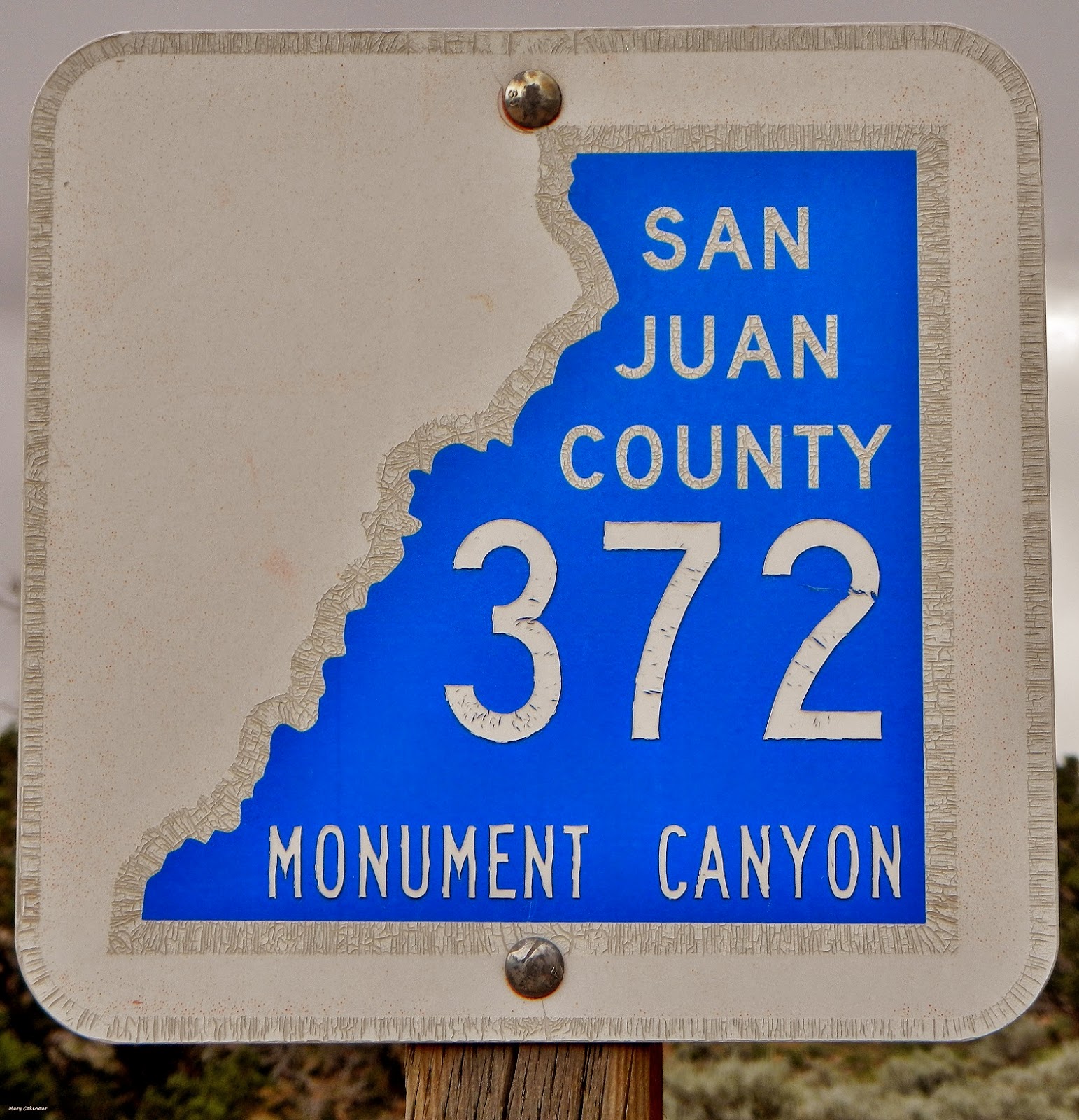 There we were, Jenna (my dog) and I at the junction taking a water and snack break.  So Jenna, which way should we go; down 372 she began to trot; of course I called her back into the SUV and off we went together.  Yep, I let the dog decide. 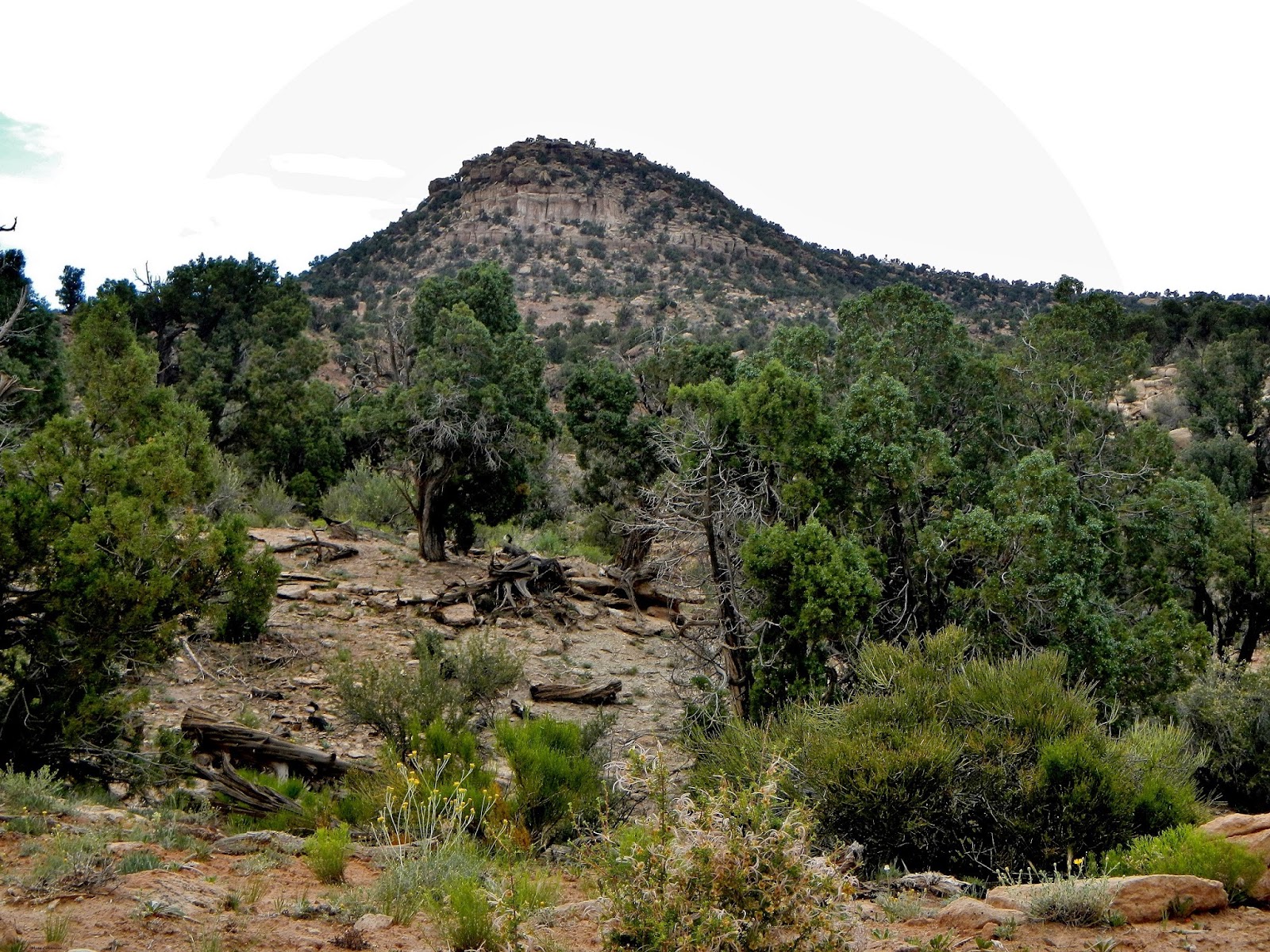 Monument Canyon is another beautiful area to travel through; quiet and serene. 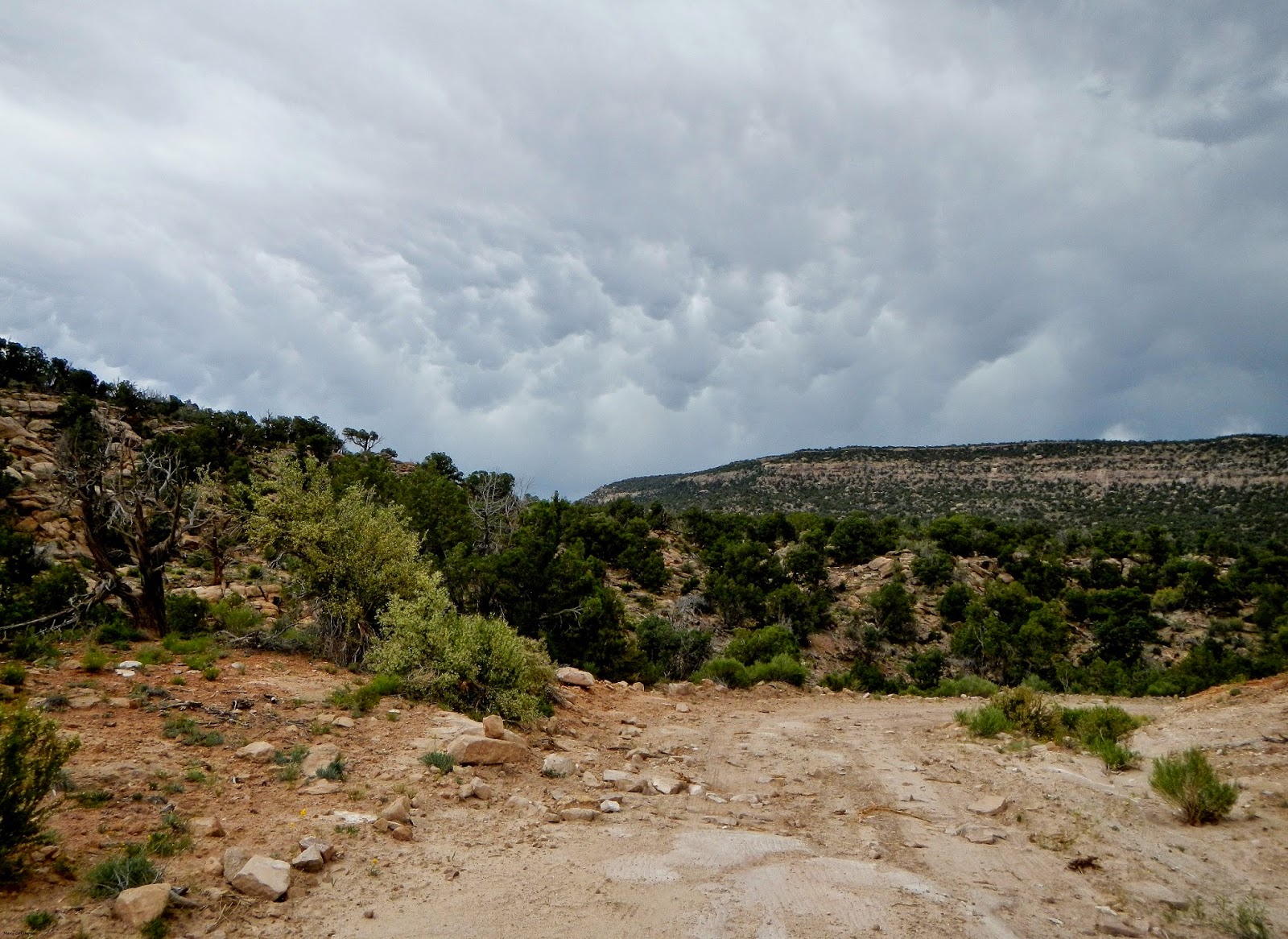 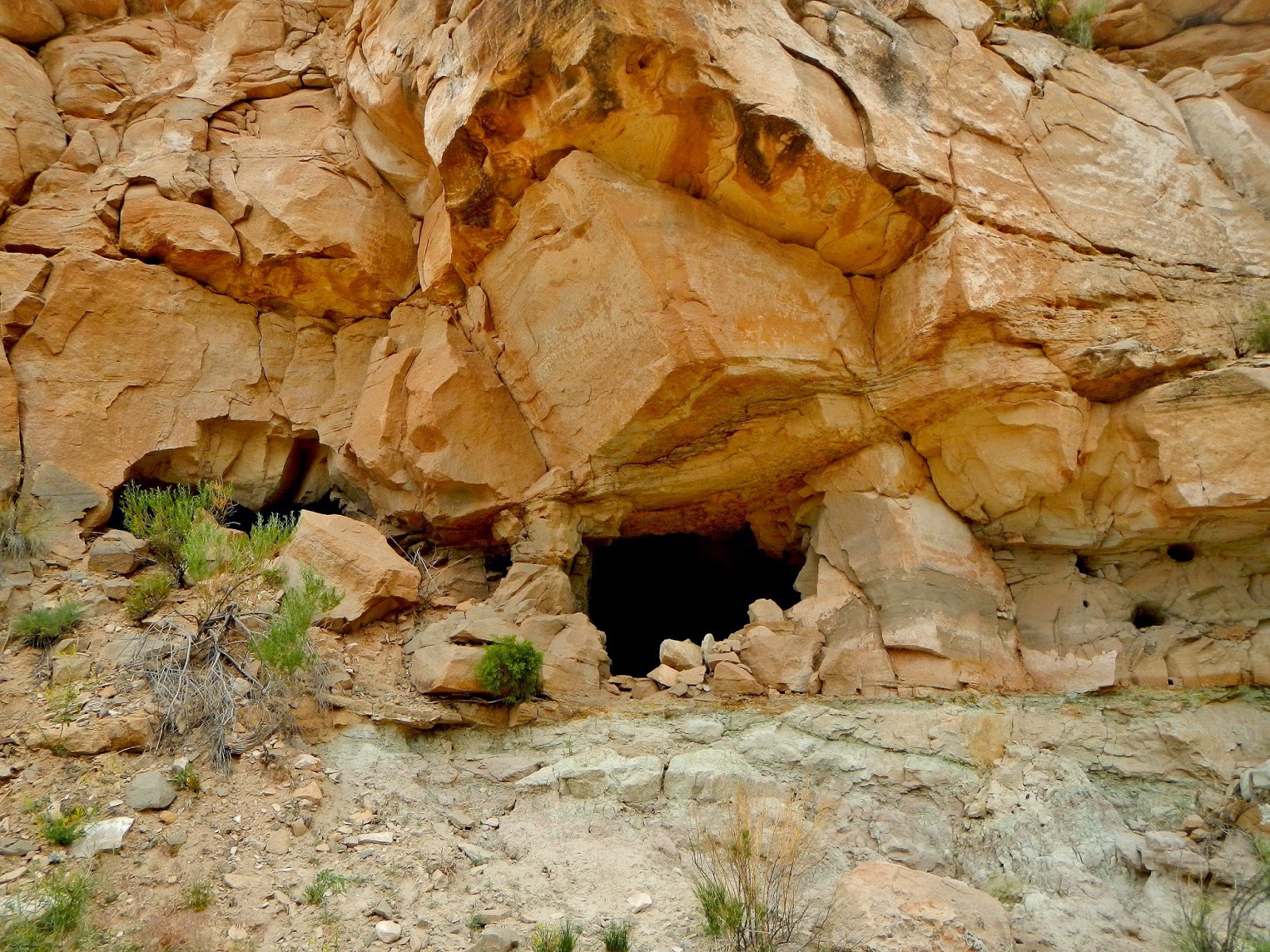 At the 1.5 mile mark, I spotted a cave almost at eye level to the vehicle.  Even though I was careful to keep an eye out for any animals, I definitely had the feeling of being watched from the area above.  There was scat nearby which I knew was not cattle or deer; I didn't wait around to see who its owner was 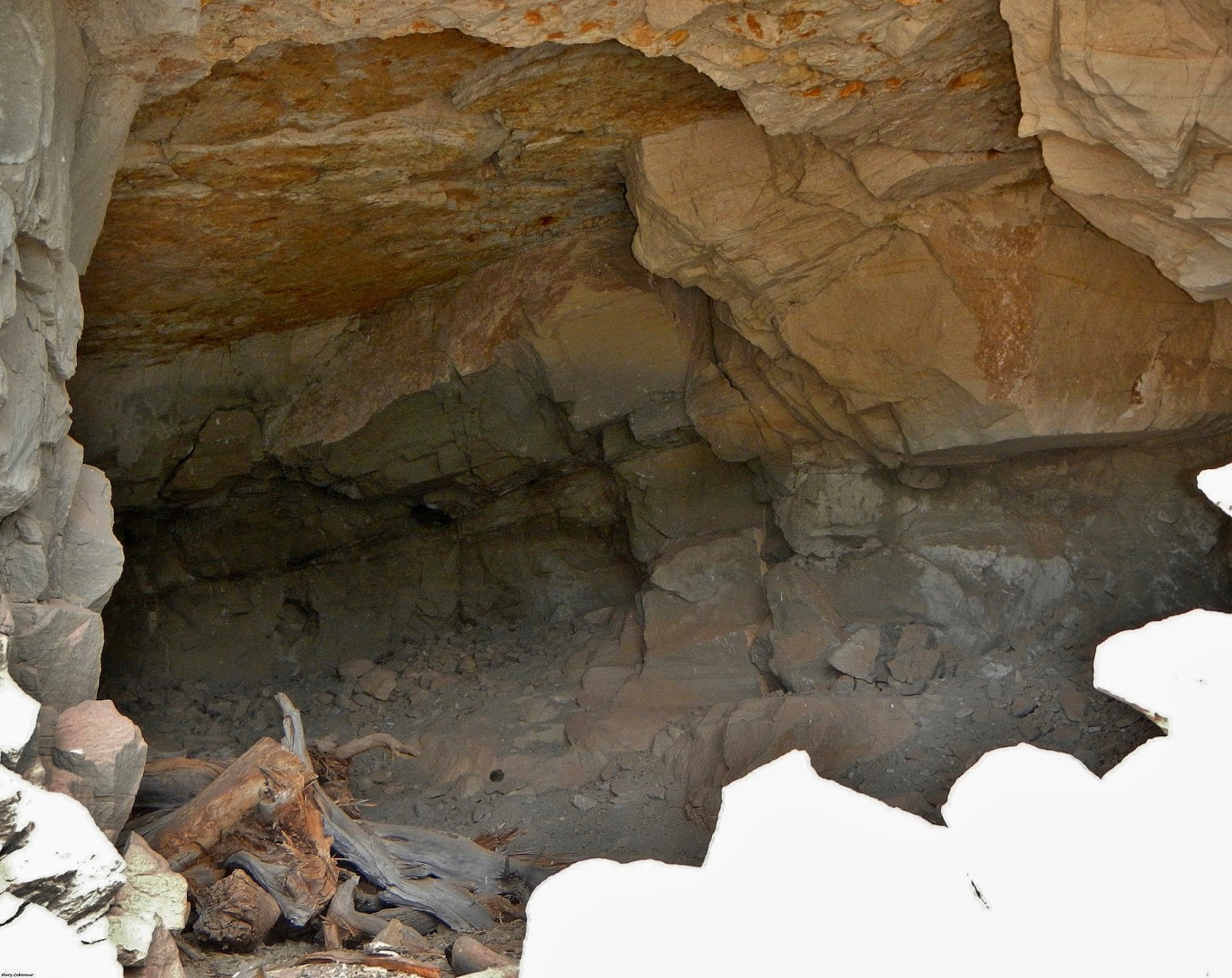 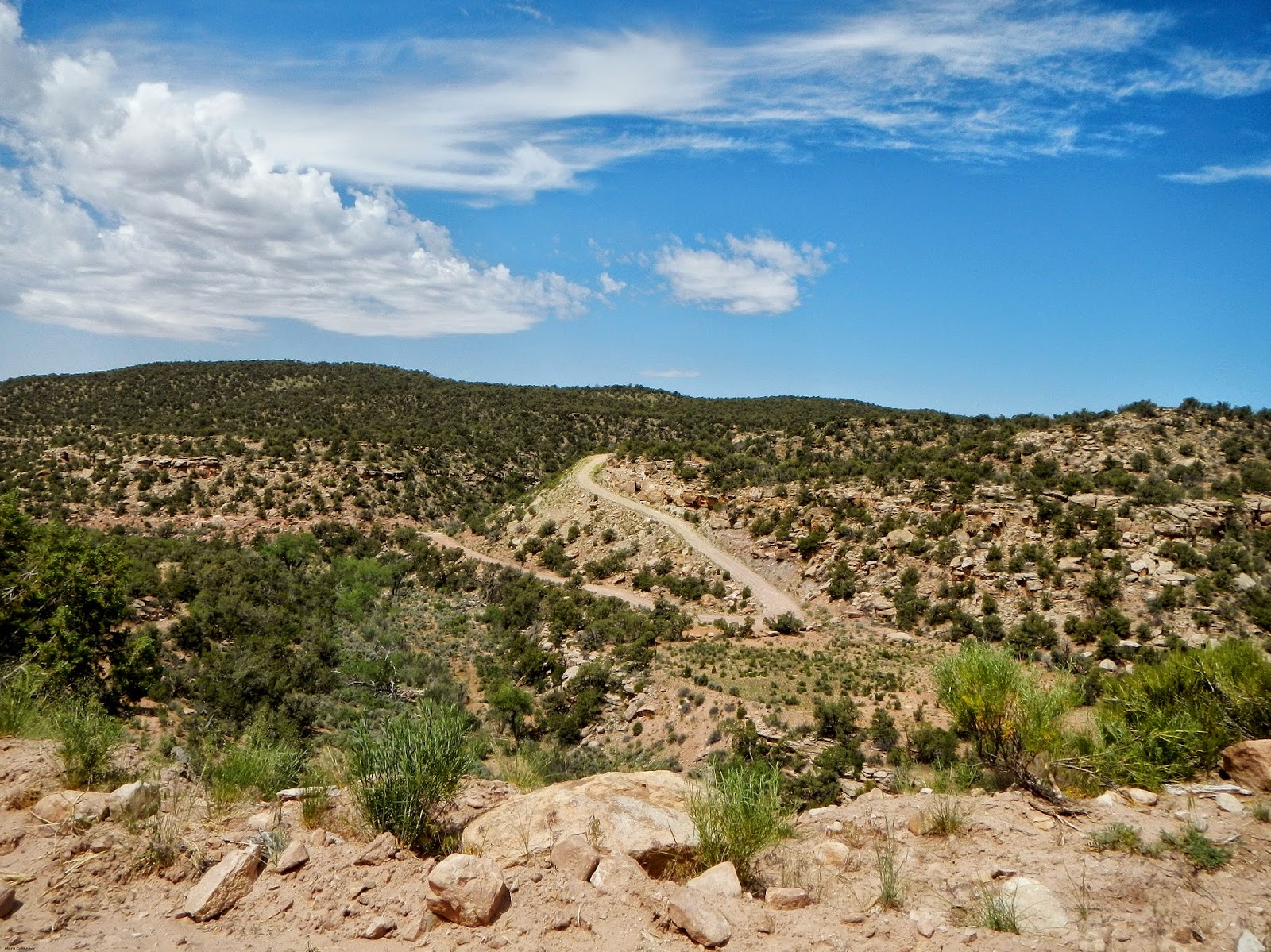 The next mile and a half is the road winding up and down, around corners, glorious views and a few, "OMG!", but it's more thrilling than it is frightening. 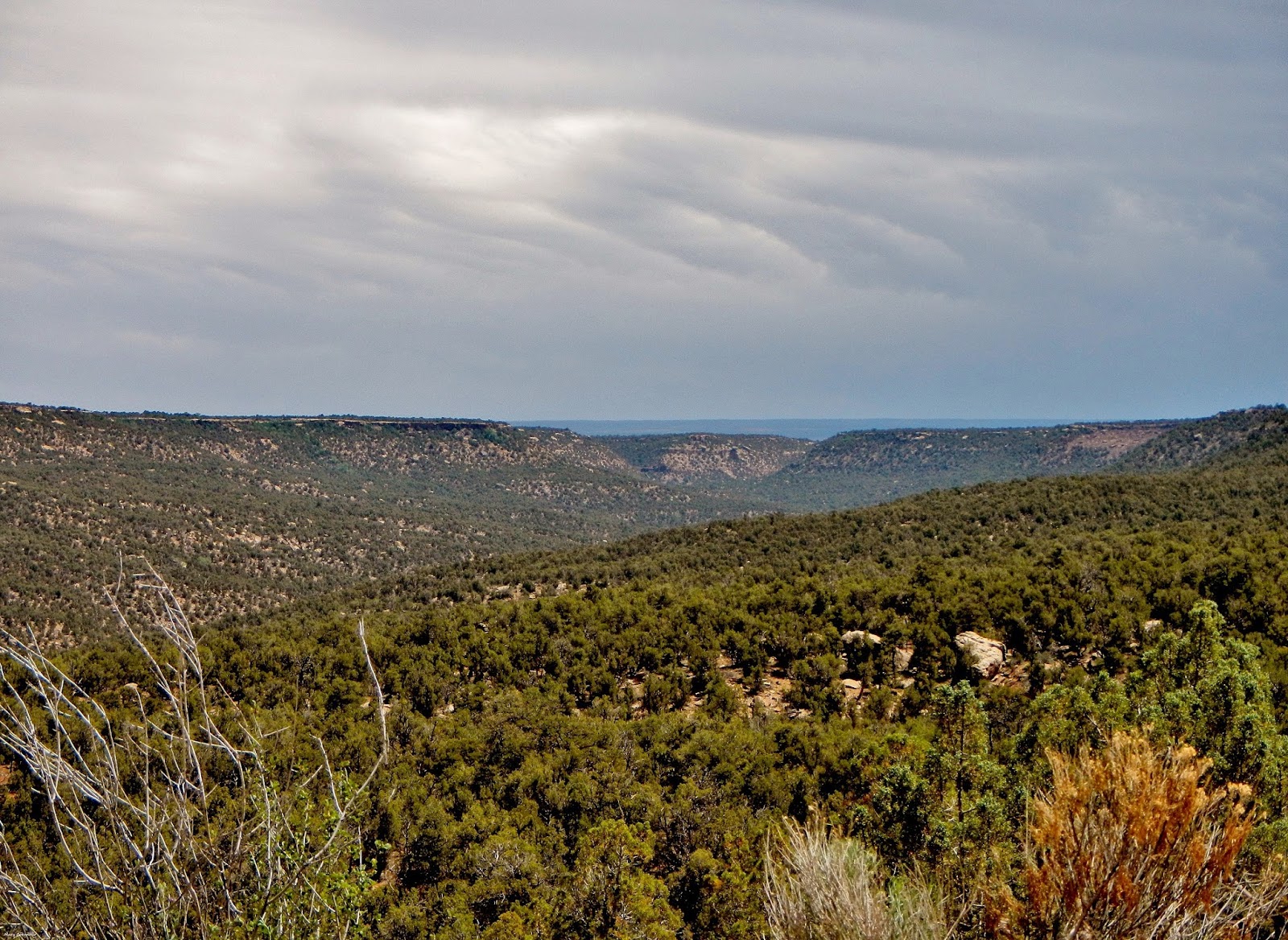 At mile mark 3, I spotted caves along some ledges; while they might have been good spots for living in, the absence of ruins indicated that the ancient people thought better than that.


At mile mark 4.5 I came up from the canyon to find...farmland!  I could not believe that the land suddenly flattened out and farmland stretched on both sides of the road.  Two miles more and I reached the junction of CR 348 - State Line; that's right, the border of Utah and Colorado.  So, you would think I simply follow State Line Road north and I'll be at Route 491 in no time.  Yeah, think again; at the end is a pump jack and oil tanks.  Maybe go south, and it will swing around to Route 491?  Nope, it dead ends at private property.  What the heck!?!

Back to the junction, so there is a dirt road at 3/10s of a mile on the north side, with no sign of course.  It ended at 3/10ths of a mile and there was finally a sign, I had been on Road S; the curve left took me onto Road 2 which ended at Road P.  Oy vey! Don't even waste a moment of thought on finding someplace to stop and ask for directions; these roads are littered with abandoned homesteads.

Road P to the left is a quick dead end, but I did pass by a Llama ranch, and two of the cutest llamas decided to pose for me.  Back tracking, I took Road P until I reached Road 6 and that took me up, finally, to Route 491 and into Dove Creek, Colorado.  Now you understand why I'm also posting the map of Colorado or you'll be driving up and down those country roads for hours; just follow the bright red line on the map. 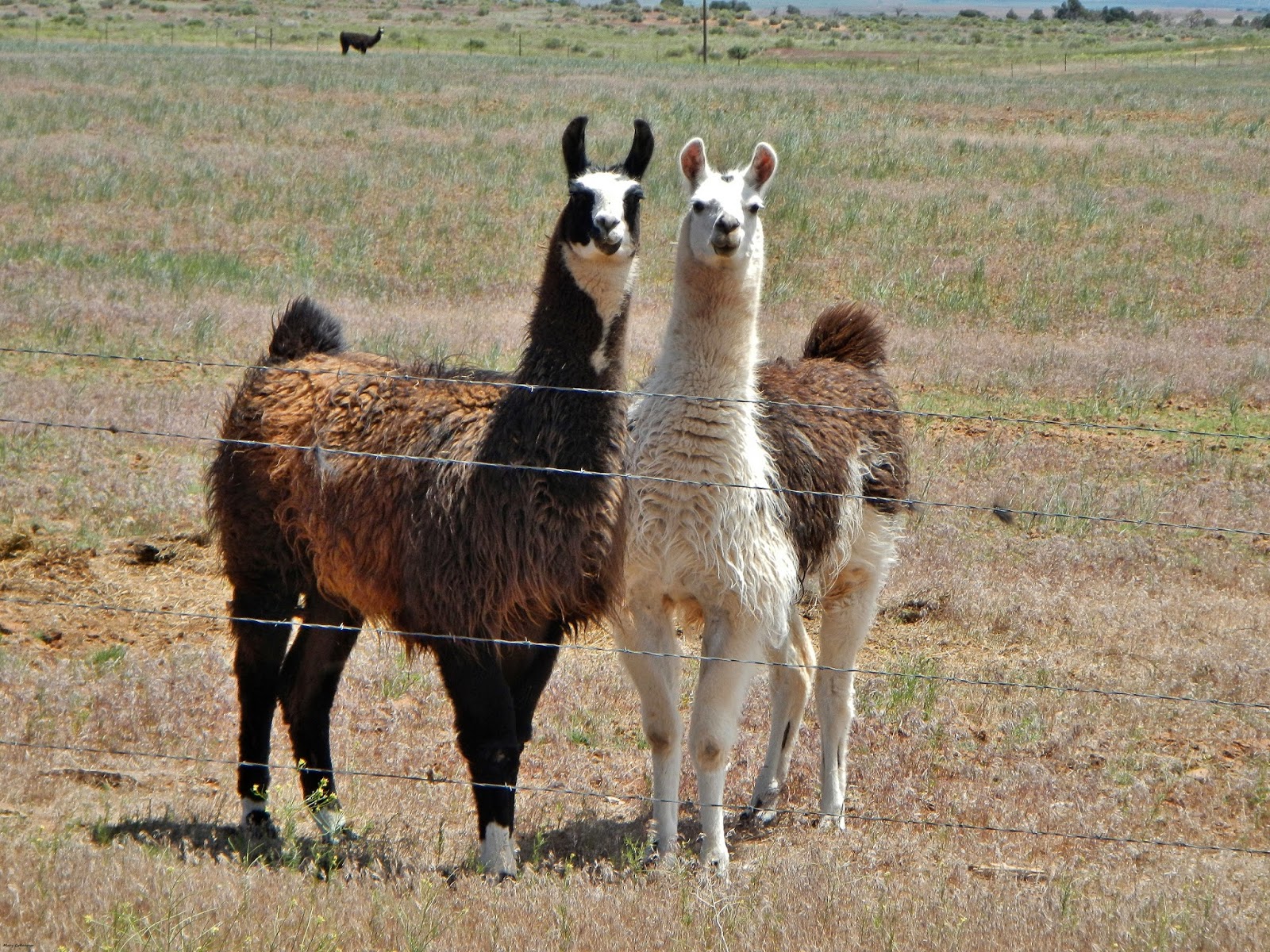 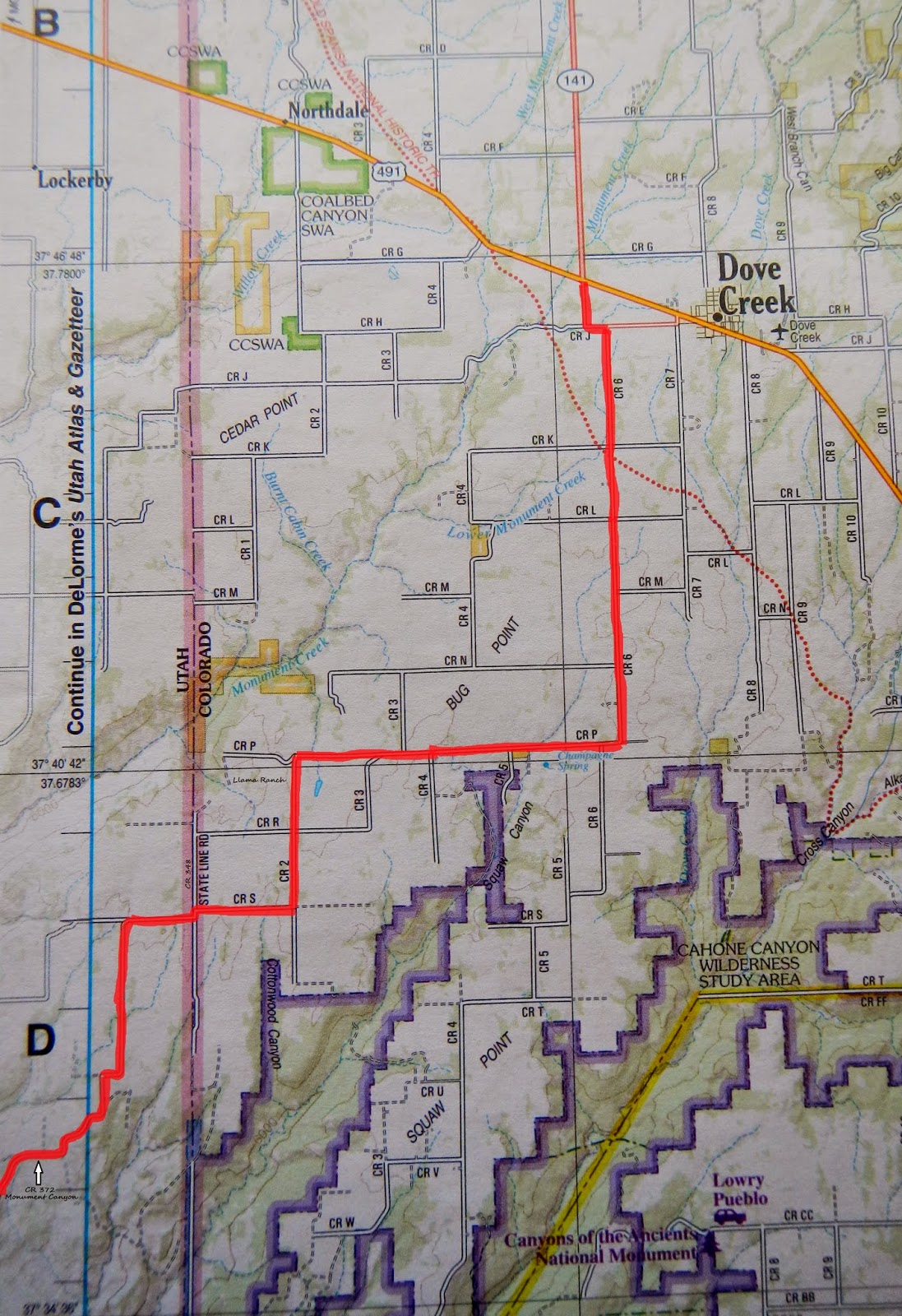 ..and so ends that adventure with my dear girl, Jenna.  She jumped onto the bed as soon as we got home, and didn't wake up till way past dinner time.

Posted by Mary Cokenour at 3:13 PM