I don't know about you, but the title of this blog post reminds me of the gothic mysteries I used to, and still do, read by the box load..Phyllis A. Whitney, Mary Steward, Daphne du Maurier, Victoria Holt, Dorothy Eden and others.  My absolute favorite was the "Dark Shadows" series written by Dan Ross (based on the short lived, but much loved daytime soap opera).  He also penned under the name, Marilyn Ross, a series of gothic mysteries which I couldn't stop reading.  I'm still searching for "Barnabas, Quentin and the Vampire Beauty"; the last book in the Dark Shadows series and the only one I do not have.  Nowadays, these type of mysteries (called "cozy mysteries") are more geared towards everyday women (homemakers, bakers, caterers, etc) who play at detective.  Yes, I have box loads of these also.

So, why the return to Sand Island?  We met a couple at Painted Hand Pueblo in Colorado (yes, will be writing about this on a later date) who told us about "dinosaur" petroglyphs they had seen at Sand Island.  Really?  We had not seen them when we had first gone to the area, but we did make one of the typical mistakes most visitors make.  We concentrated on the main panel area when we knew better; explore everywhere, not just a main site.

This time we went to the end of the main road, parked and began to hike along the entire way.  Well, lets be honest; I walked while my husband drove behind me in the vehicle.  He was good to me though and made sure to remind me every 15 minutes to drink water.  We did find one section where the petroglyphs could be seen as images of dinosaurs; interpretation is up to the onlooker of course.

End of the Road near Route 163

The glyphs in this area are questionable due to the graffiti; and some of the images seem oddly out of place compared to other glyphs throughout. 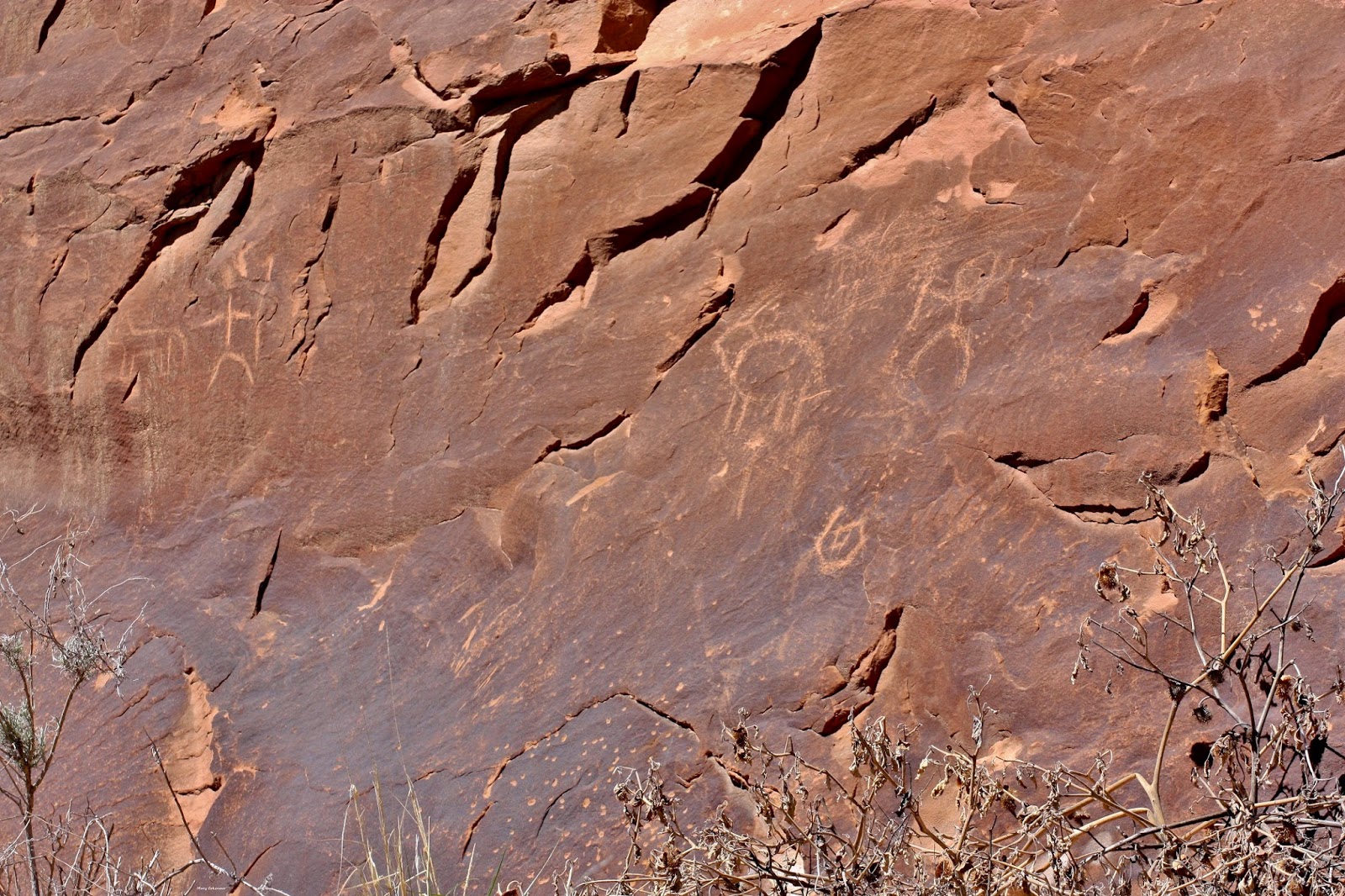 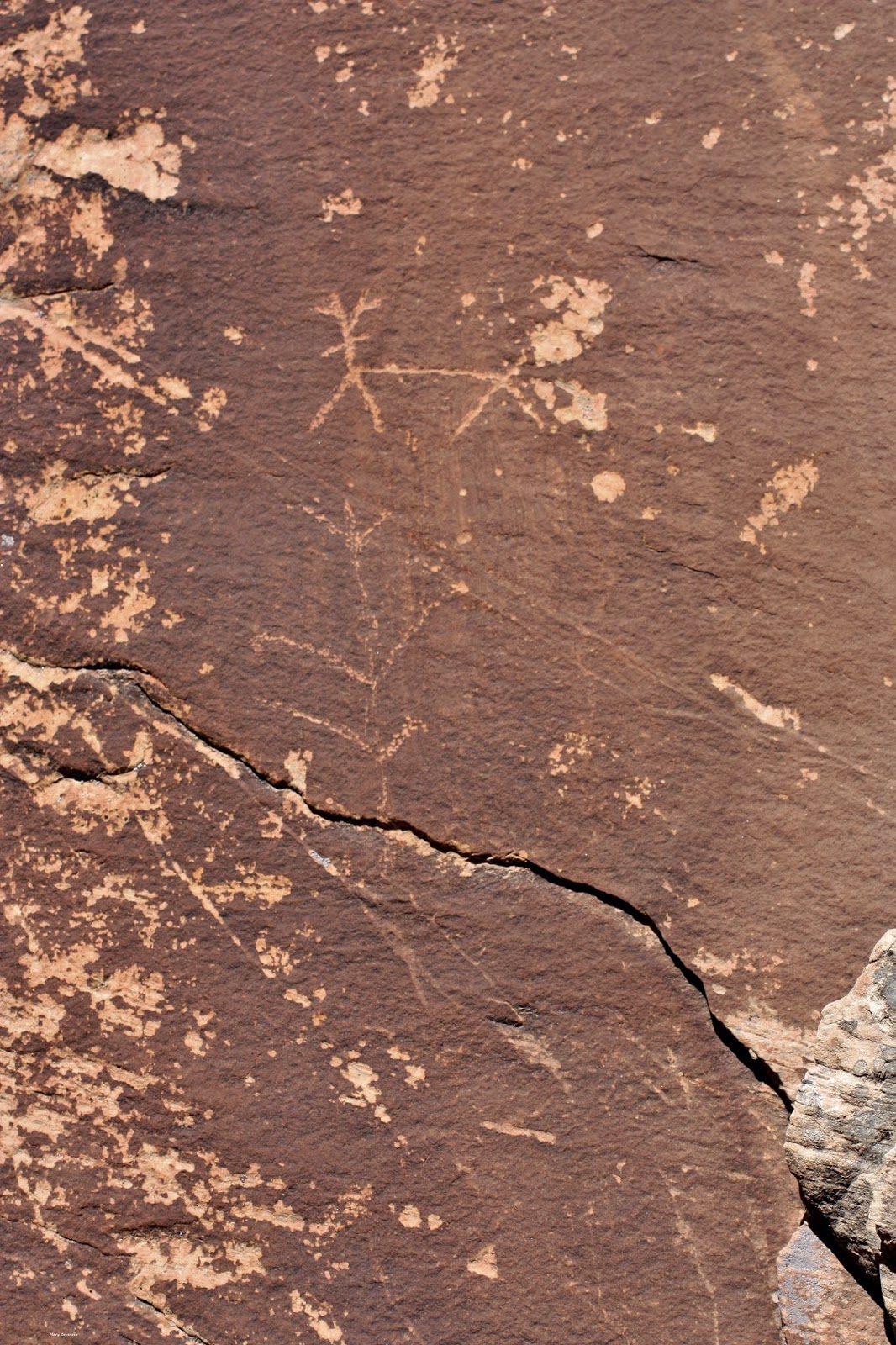 There is a turn around circle and these glyphs are just before you get to this area.  In my other post about Sand Island, I mentioned they were 1/10th of a mile west of the main panel. 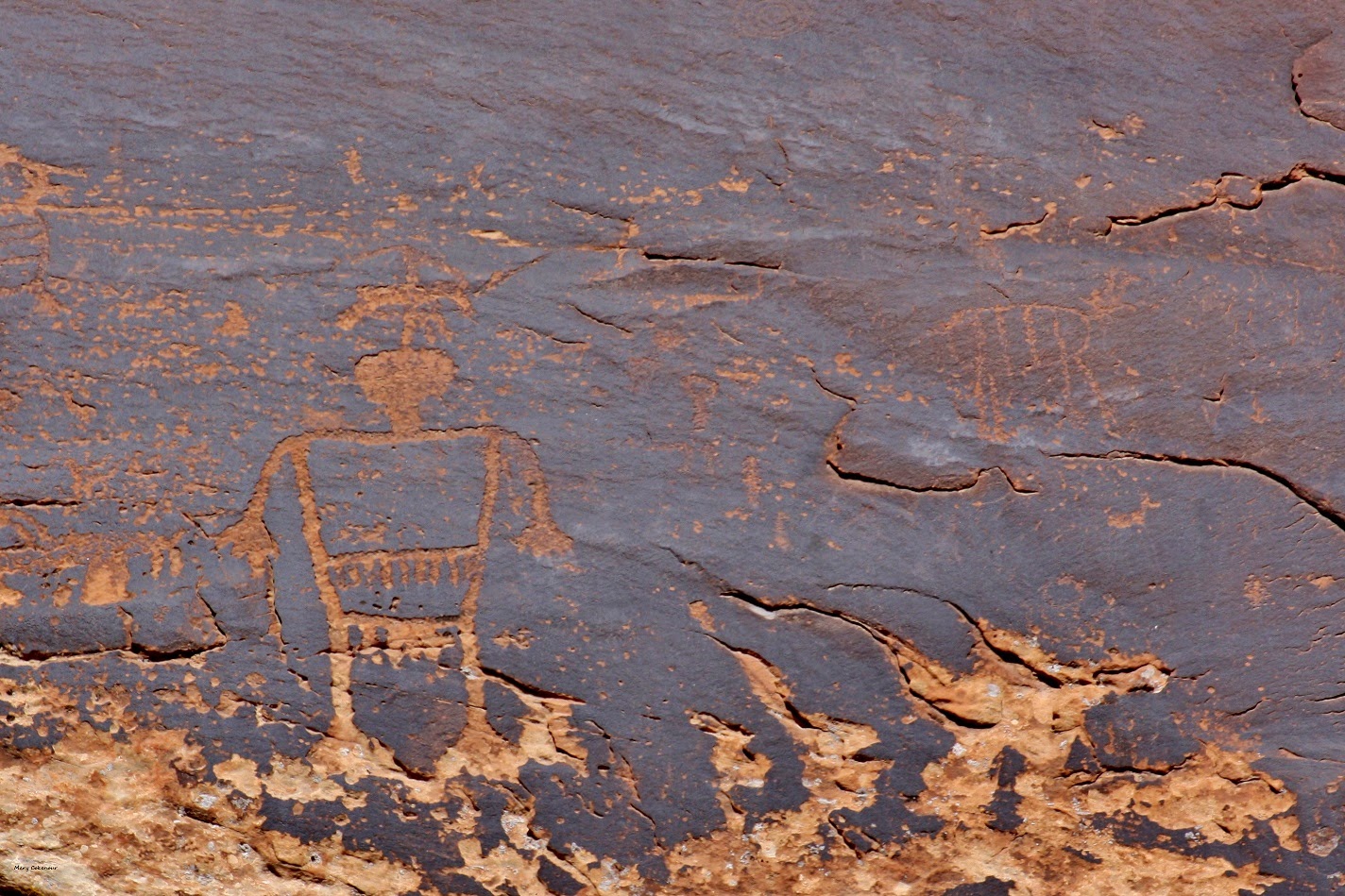 At the westerly end of the main panel, we found a figure in a headdress, and, what looked to us, like a scorpion. 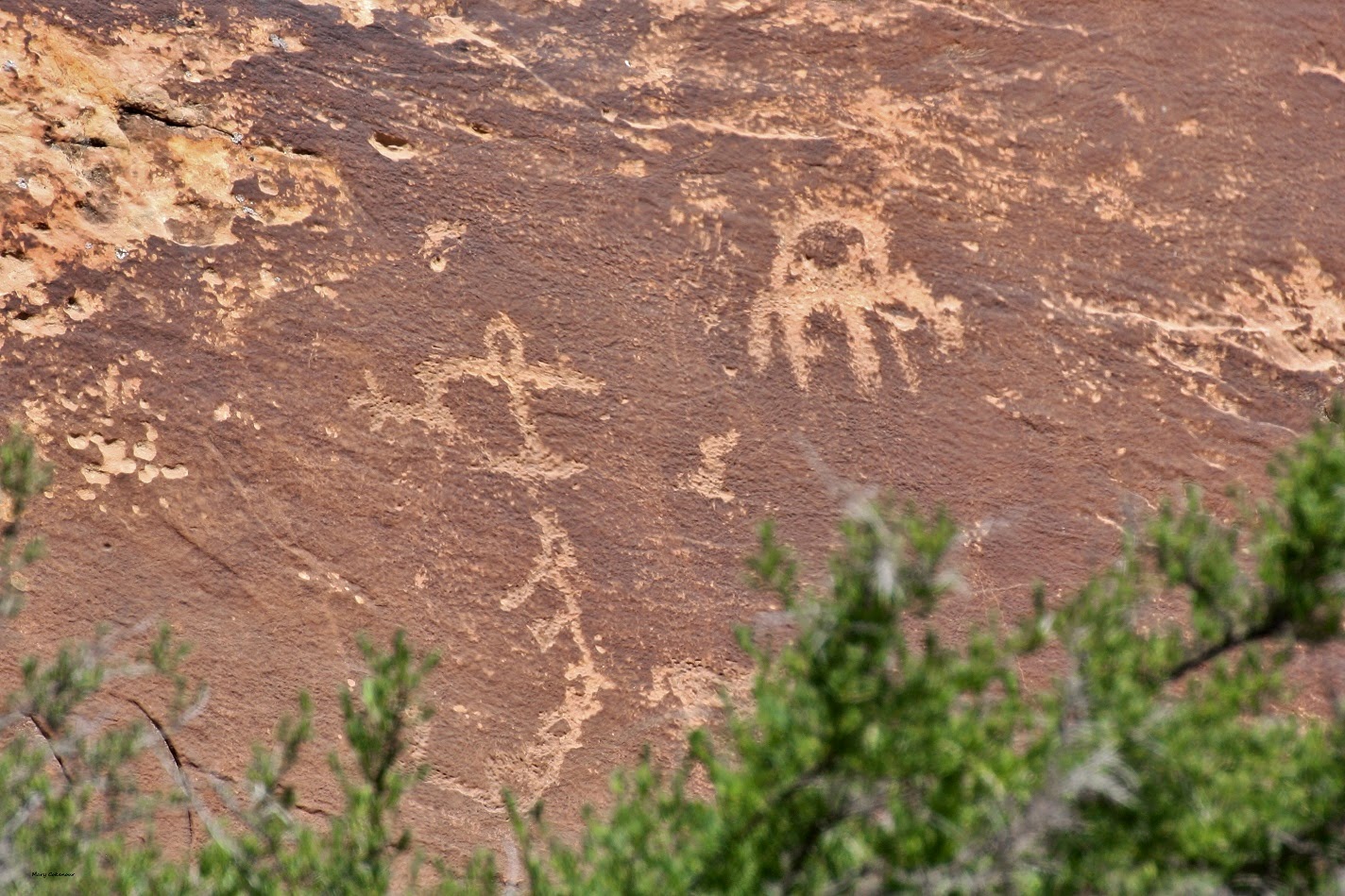 If you want to see my photos of the main panel, click HERE; otherwise I'm going to continue on an eastward trek along the road.  East of the main panel, the walls are fenced off and you cannot get near them; a zoom lens on the camera and/or binoculars help a lot, especially for those faded petroglyphs. 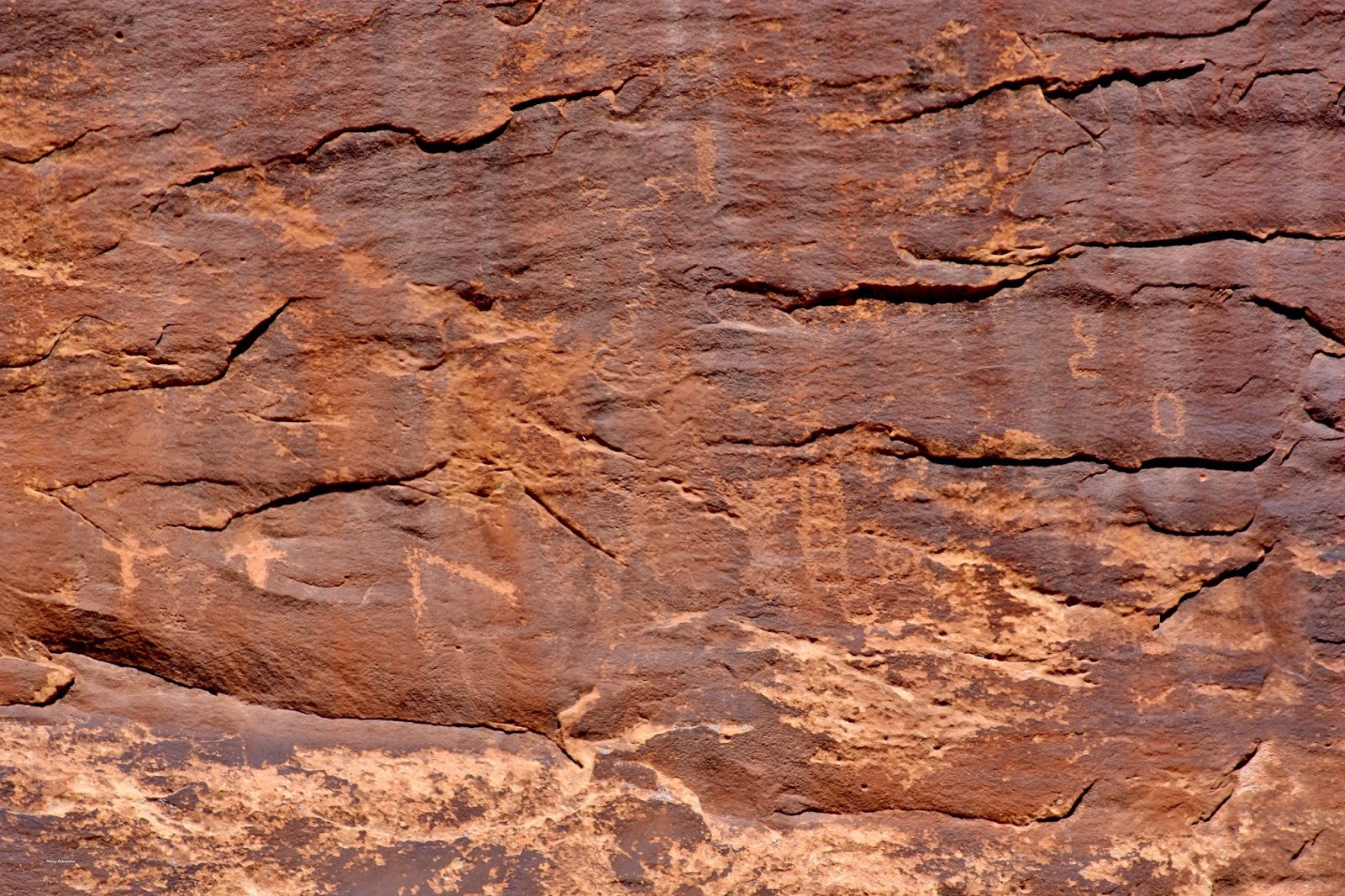 Just keep walking eastward to the split in the road. 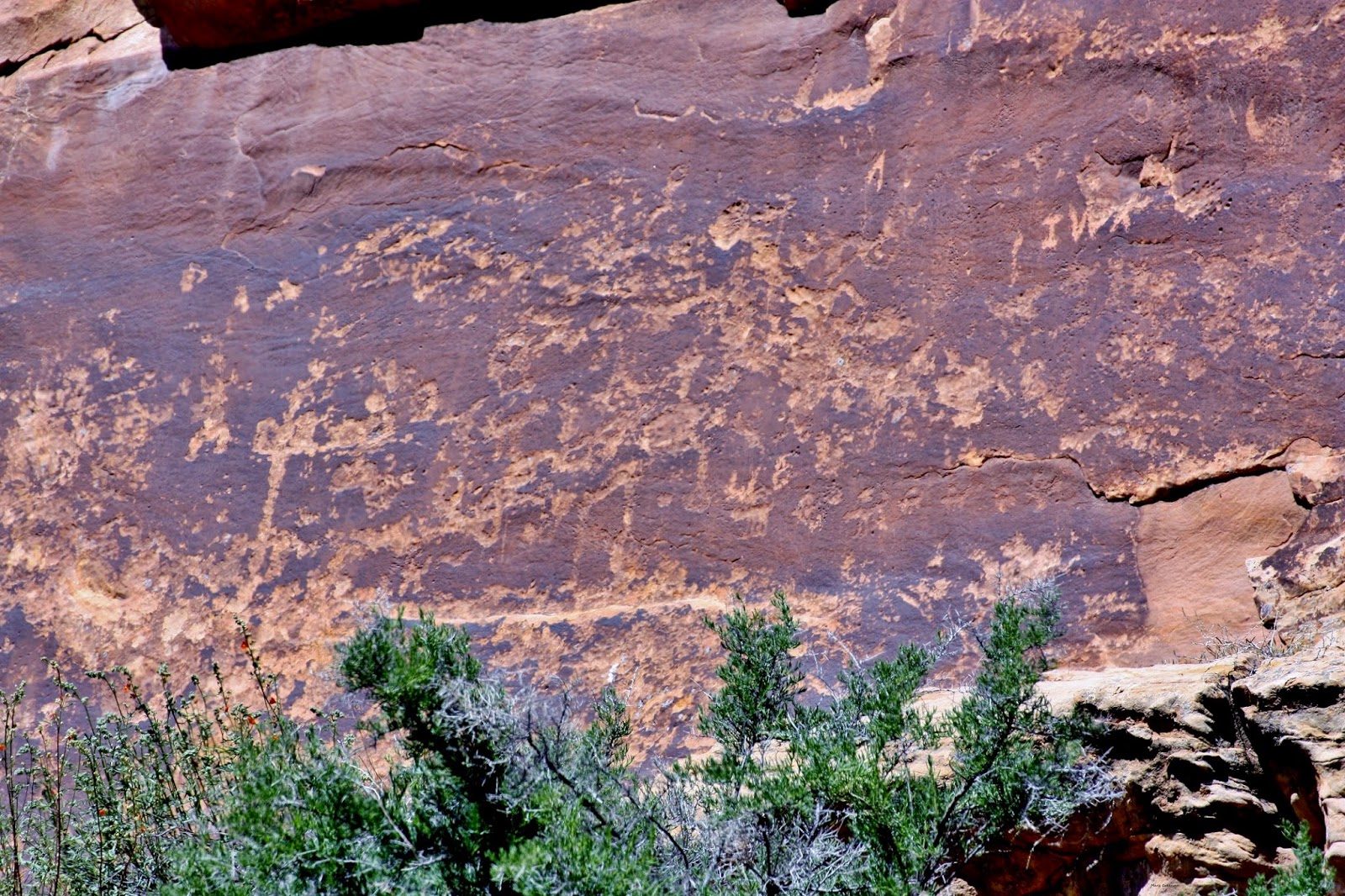 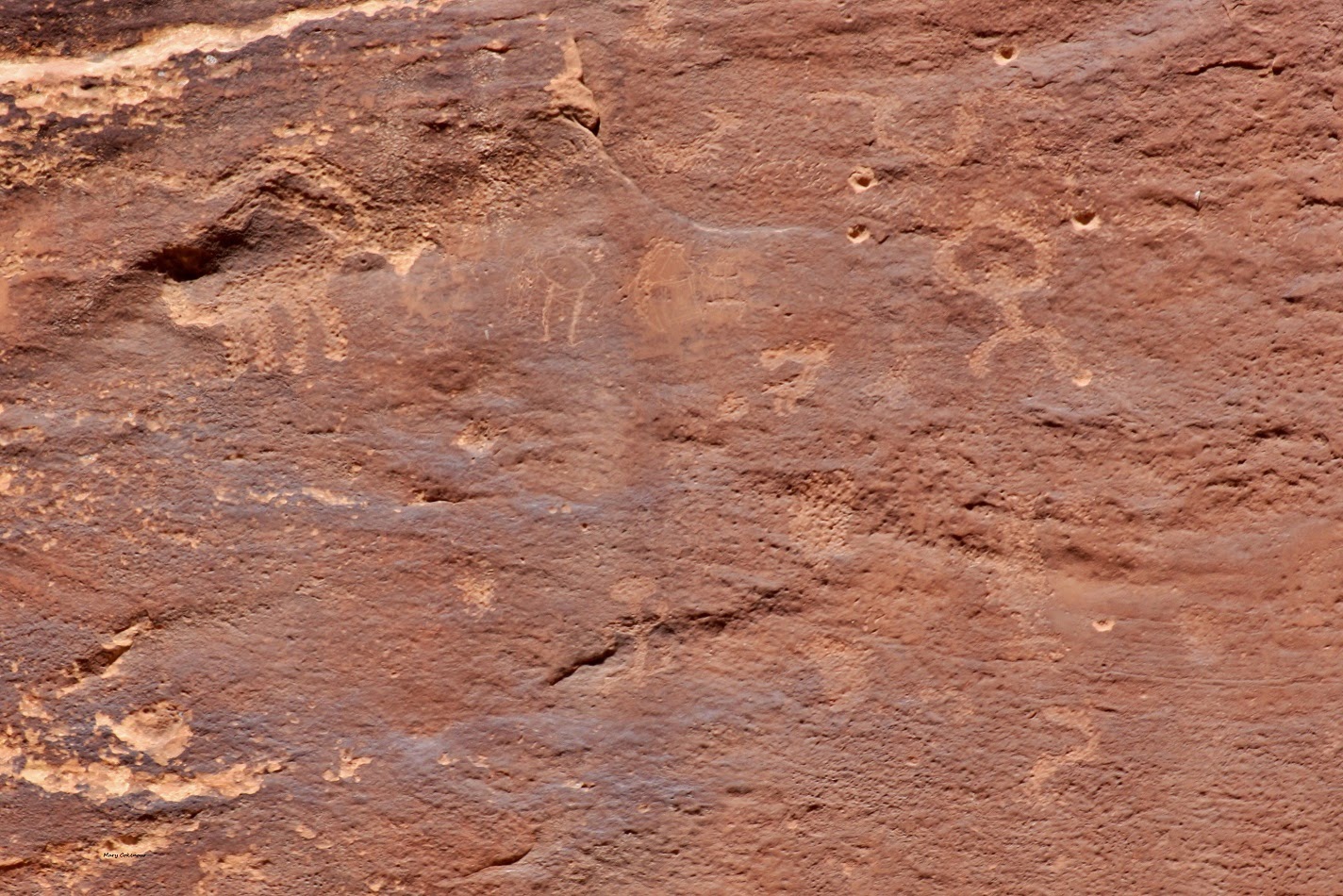 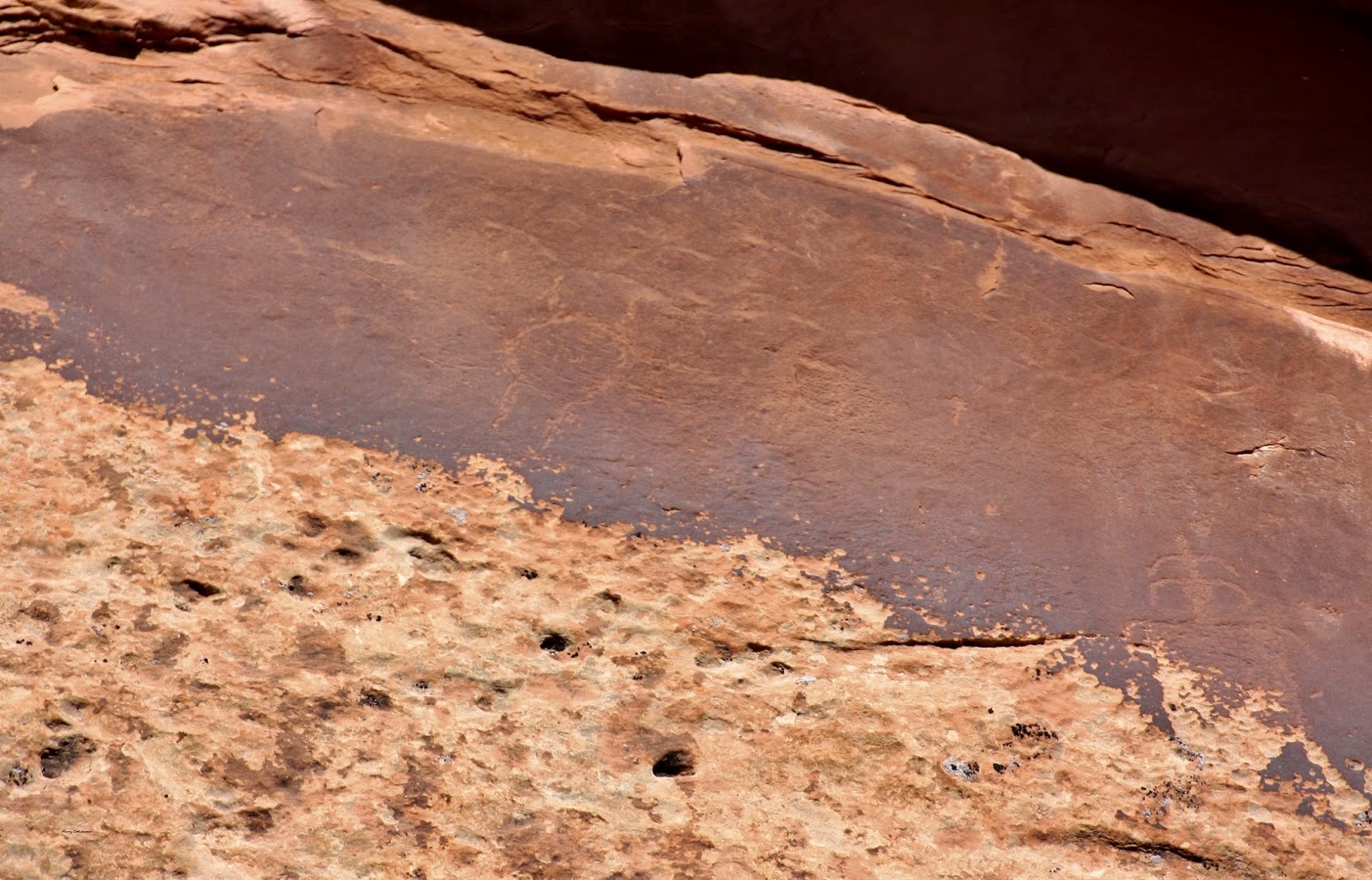 ﻿
Look at the center left side of the "Hunting Panel", you can make out several figures that look like a T-Rex and a few Brontosaurus figures.  I wonder if these are the "dinosaurs" the couple told us about?  So, the question is, who made these figures; modern man, or ancient? 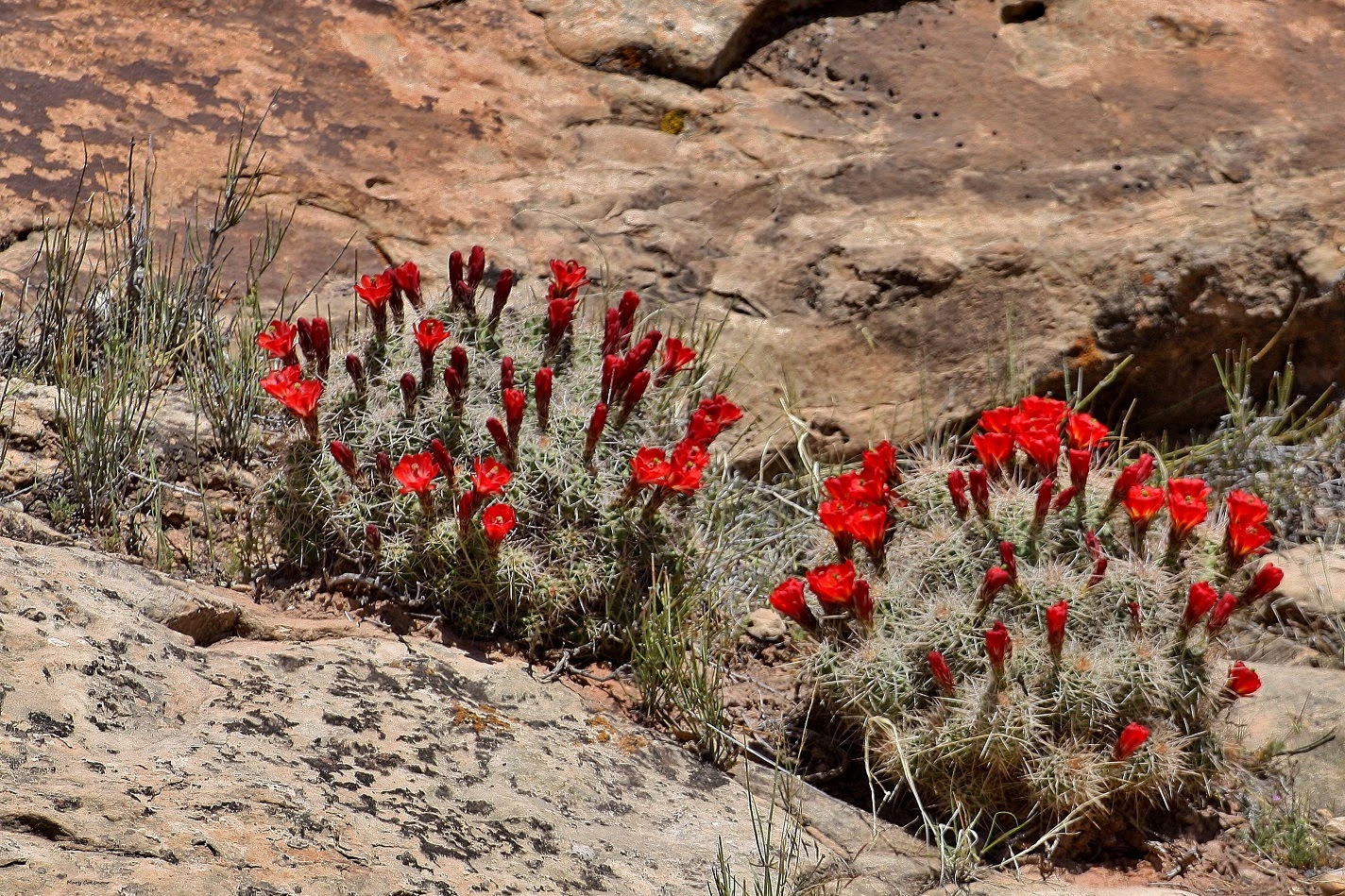 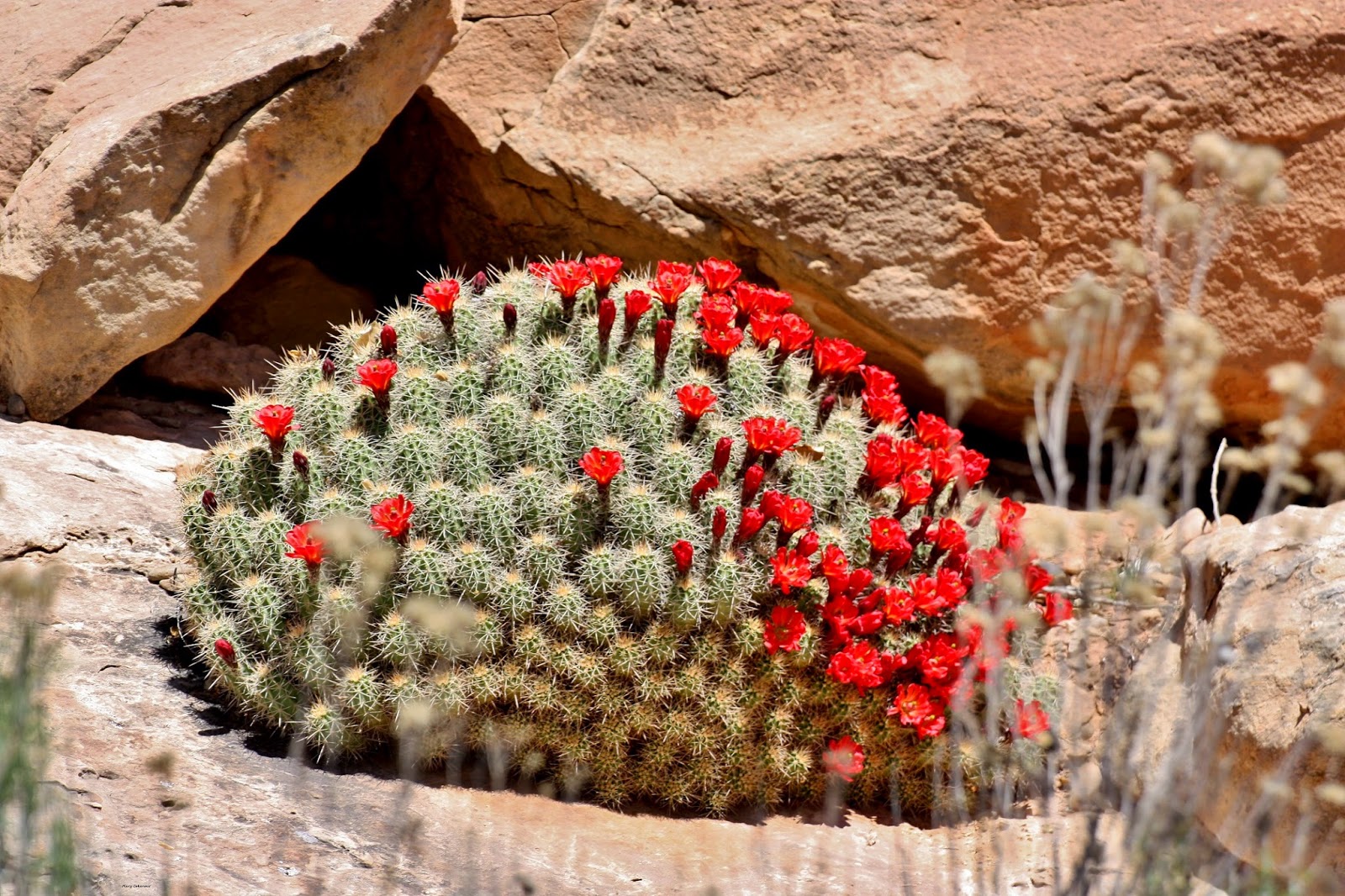 At the split in the road... 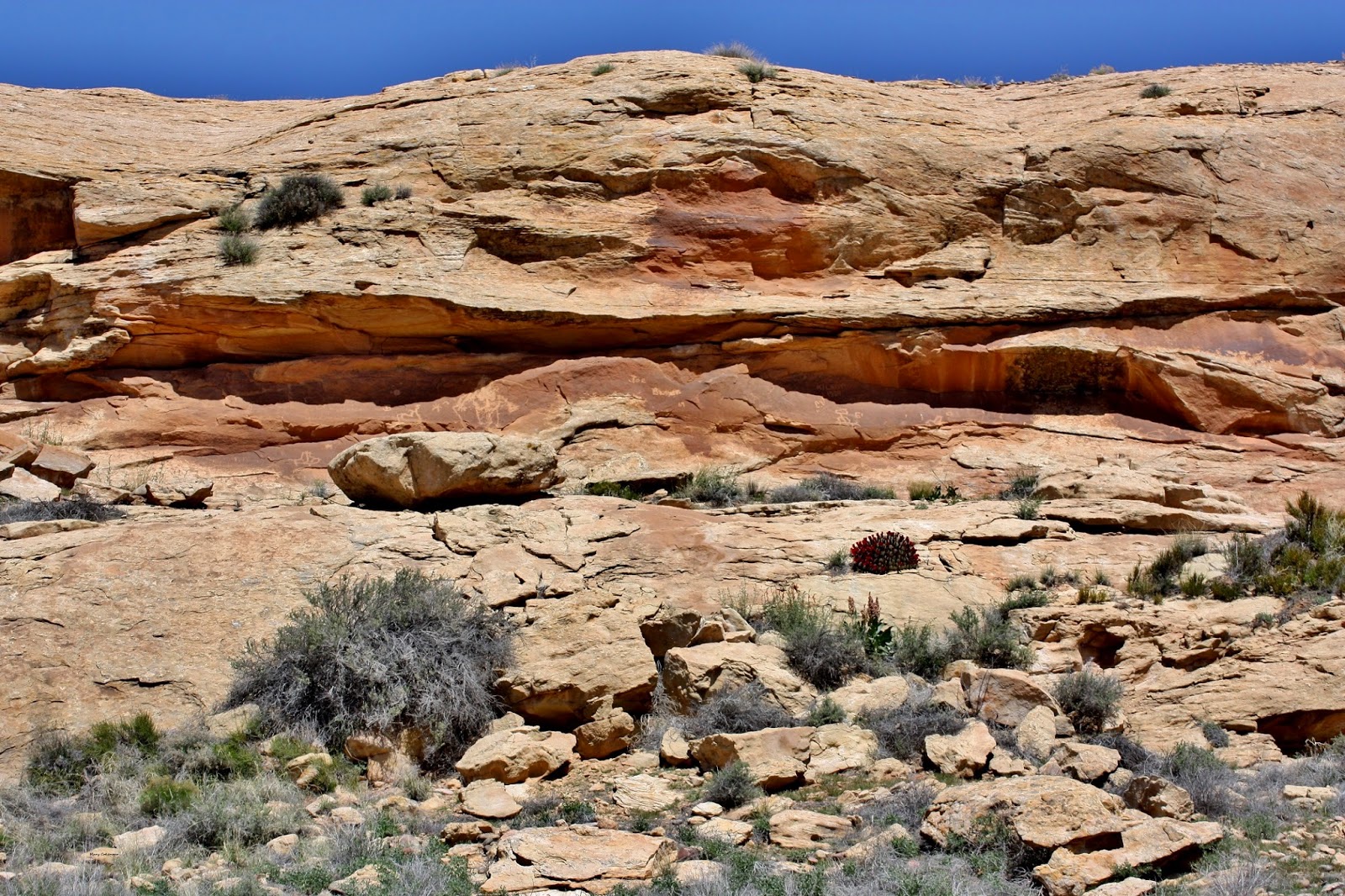 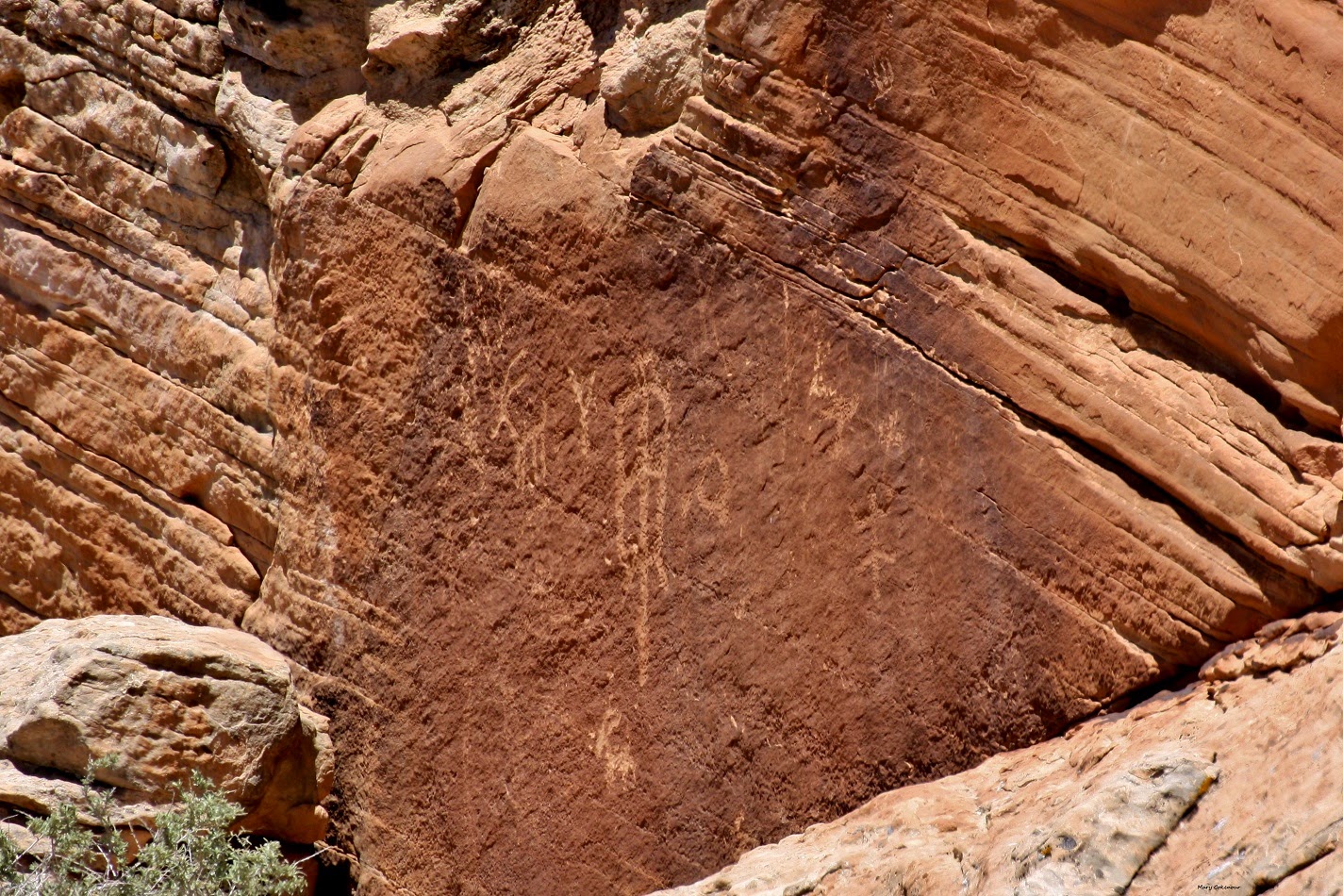 At the split, you can go down to more camping sites, the ranger station, or the boat docks for sailing along the San Juan River.  We began to see petroglyphs on the walls behind the ranger station and the first camp site. 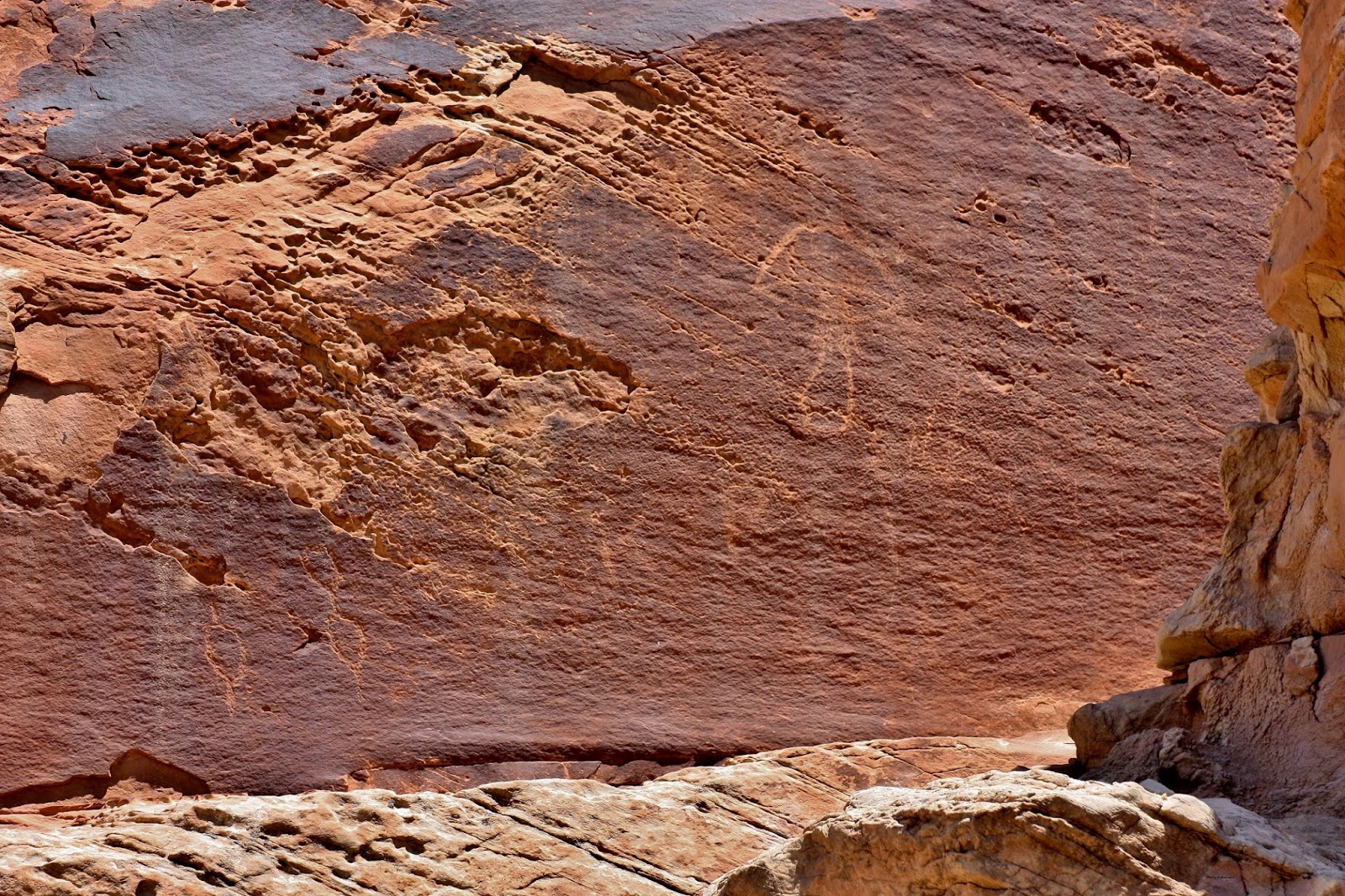 As I walked past the other campsites, I found less evidence of petroglyphs and more evidence of desecration by locals and/or visitors. If any petroglyphs were on these walls, modern day persons made sure to destroy them. 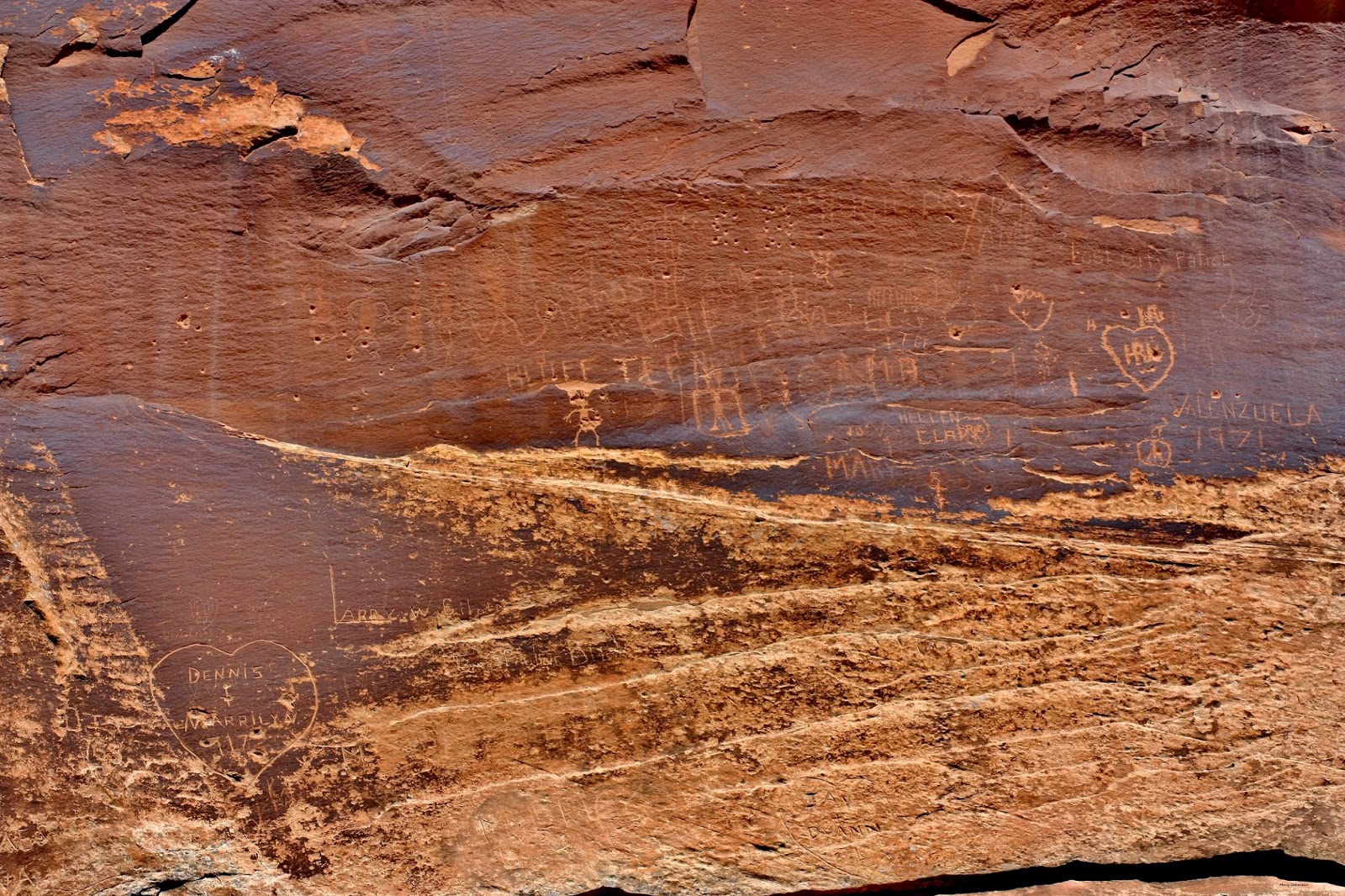 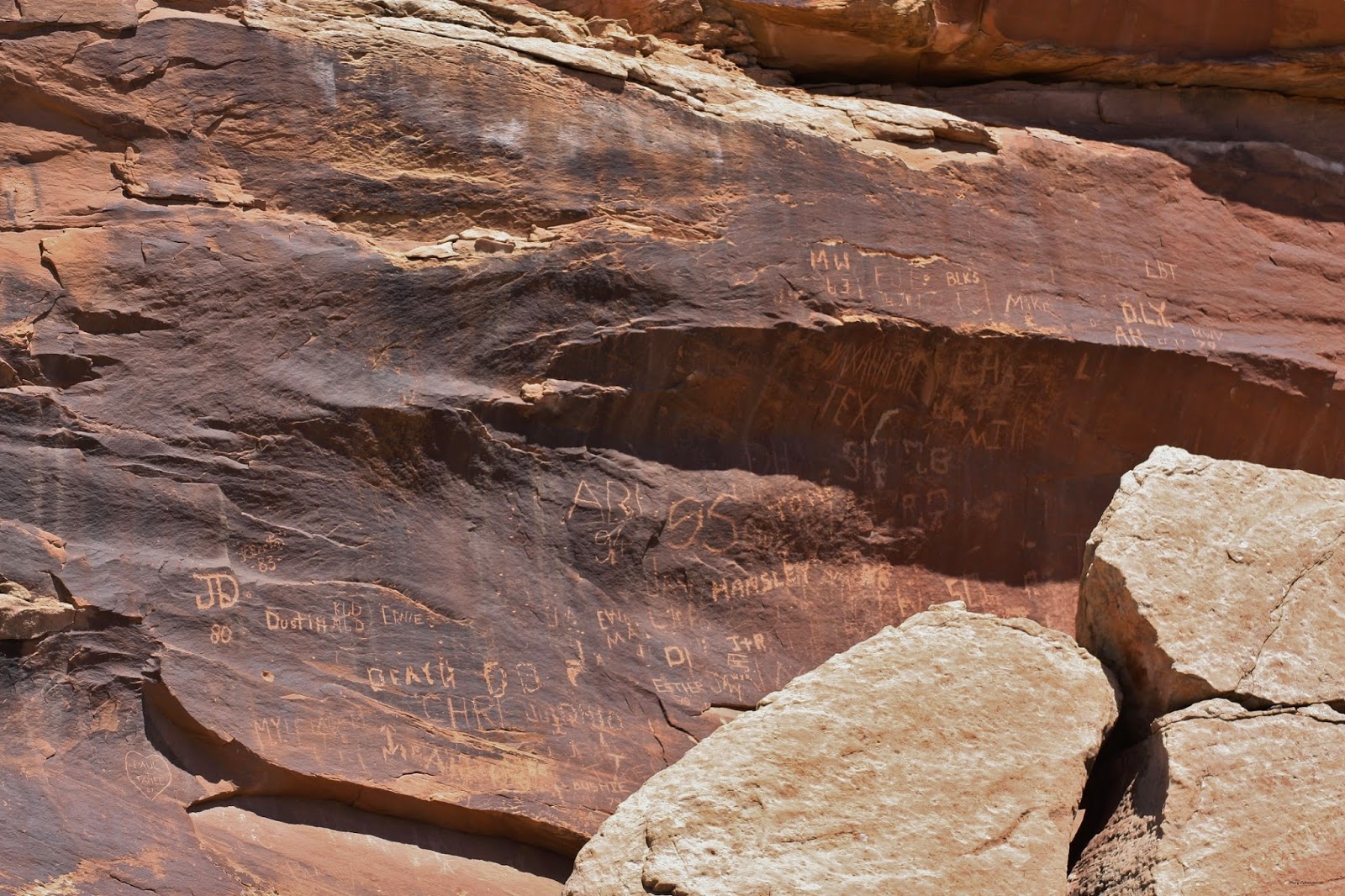 As with any mystery, a death occurred in "Return to Sand Island"; sadly, I must announce the passing of my one year old...hiking boots.  These brave, loyal soles traveled with me over rocky terrains; along precarious ledges and cliff edges; through sand, water, mud and all manner of vegetation.  They danced a jig while trying to remove a bug from my personage (Get it off, it ain't mine!!!).  My black, ankle hugging, hiking boots saved my ankles from breakage many a time; while the hot pink laces announced, "Here I am!!!"  *sigh* Torn, tattered and split apart; these brave soles cried out for release from the pain.  Goodbye my dear, dear friends; now I must search for a pair that will serve me as well. 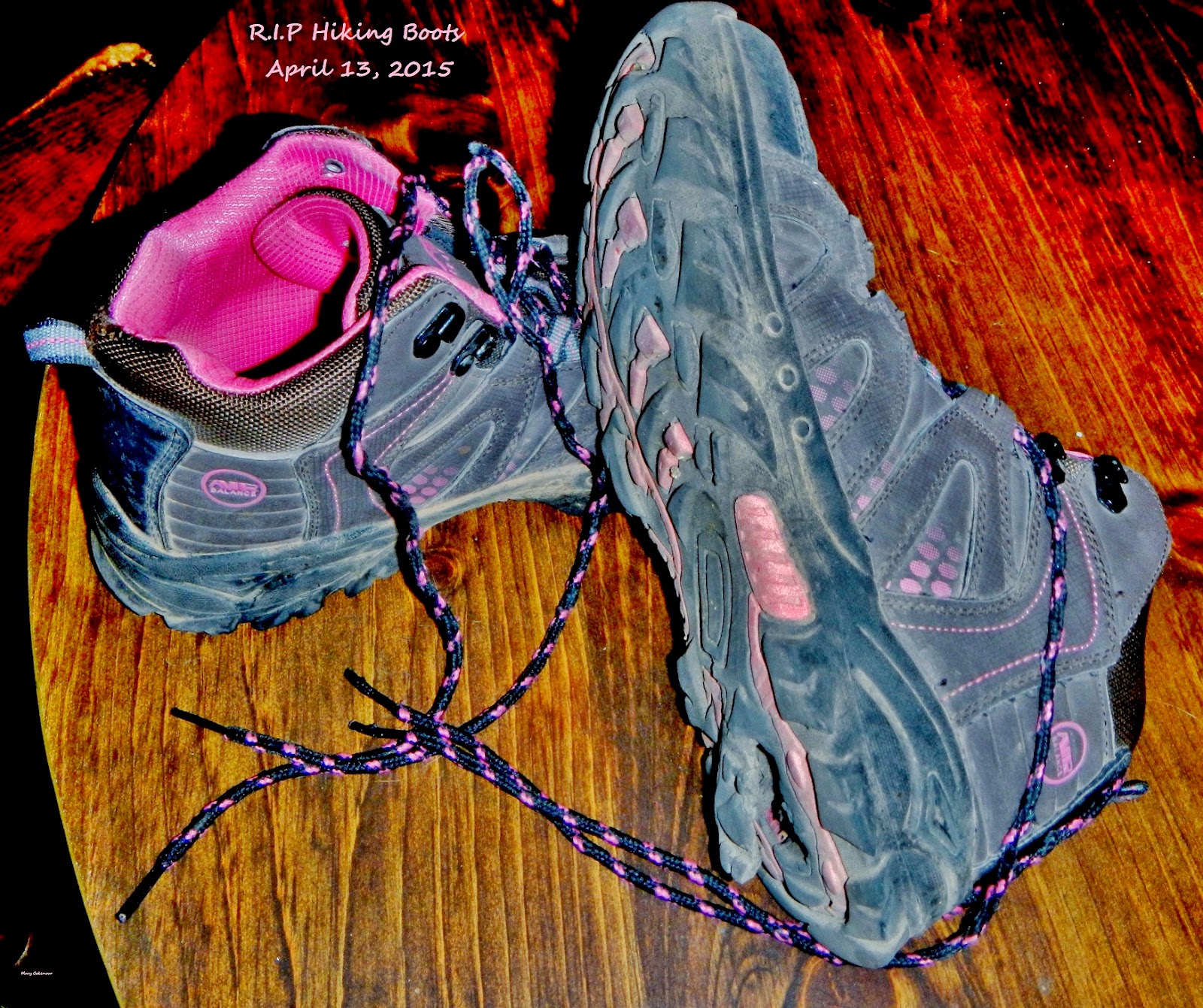