The Manti-La Sal National Forest encompasses two areas in southeastern Utah, the La Sal Mountains (east of Moab) and the Abajo Mountains (west of Monticello).  I am often asked what does "Manti" stand for and there are two definitions:  the first refers to the cuisine of Turkey; manti (mantu) is a dumpling consisting of a spicy meat or lamb mixture.  The second comes from Brigham Young who took the word from the Book of Mormon; it supposedly means "red earth", but has its origins in no known language.  Since I'm talking about Utah, it's the second definition that applies here.  "La Sal", however, is from the Spanish language and mean "the salt".  Roy and I have been up in the Abajos many times since moving to Utah, but this year we are determined to get up into the La Sal Mountains finally and, especially, drive the La Sal Loop Road.

This adventure will be written up in three parts: Part One is FR 095 which begins its trek from North Blue Mountain Road in Blanding and continues west through the mountains, but I'll be turning onto FR 088 - Gooseberry Road for Part Two; Part Three will be FR 079 - Johnson Creek Road which begins its trek at the Monticello Welcome Center and becomes North Blue Mountain Road as you go towards Blanding.  I will post a separate map, with the road being written about highlighted, so you can understand all the looping.  Confused?  Well you would have been quite amused seeing Roy drive his SUV, me beside him with 4 maps laid out, trying to figure out what is what, and where the heck were we.  Why all the maps?  Depending on which part of the road you're on, it could be maintained by the BLM, the Forest Service, or San Juan County; each agency puts their own number on the road...it's the same road, but sections are numbered differently, and....you'll get it eventually.  Oh, the fourth map was my Delorme Atlas & Gazetteer of Utah.

Map Time!!!  I highlighted the road on this map in a bluish-purple; not that thick line that outlines the national forest area in straight lines, but that thinner, winding one.  From Route 191, turn onto 200 N, make a right onto N 100 E (called Bronco Drive for the San Juan High School you'll pass by); you know you're on the correct street as you'll pass by the DMV and Police Dept. also.  Eventually it will be renamed "N Blue Mountain Road" as you get further away from Blanding and begin ascending; the pavement will end and will become graded gravel as you get closer to the mountains. 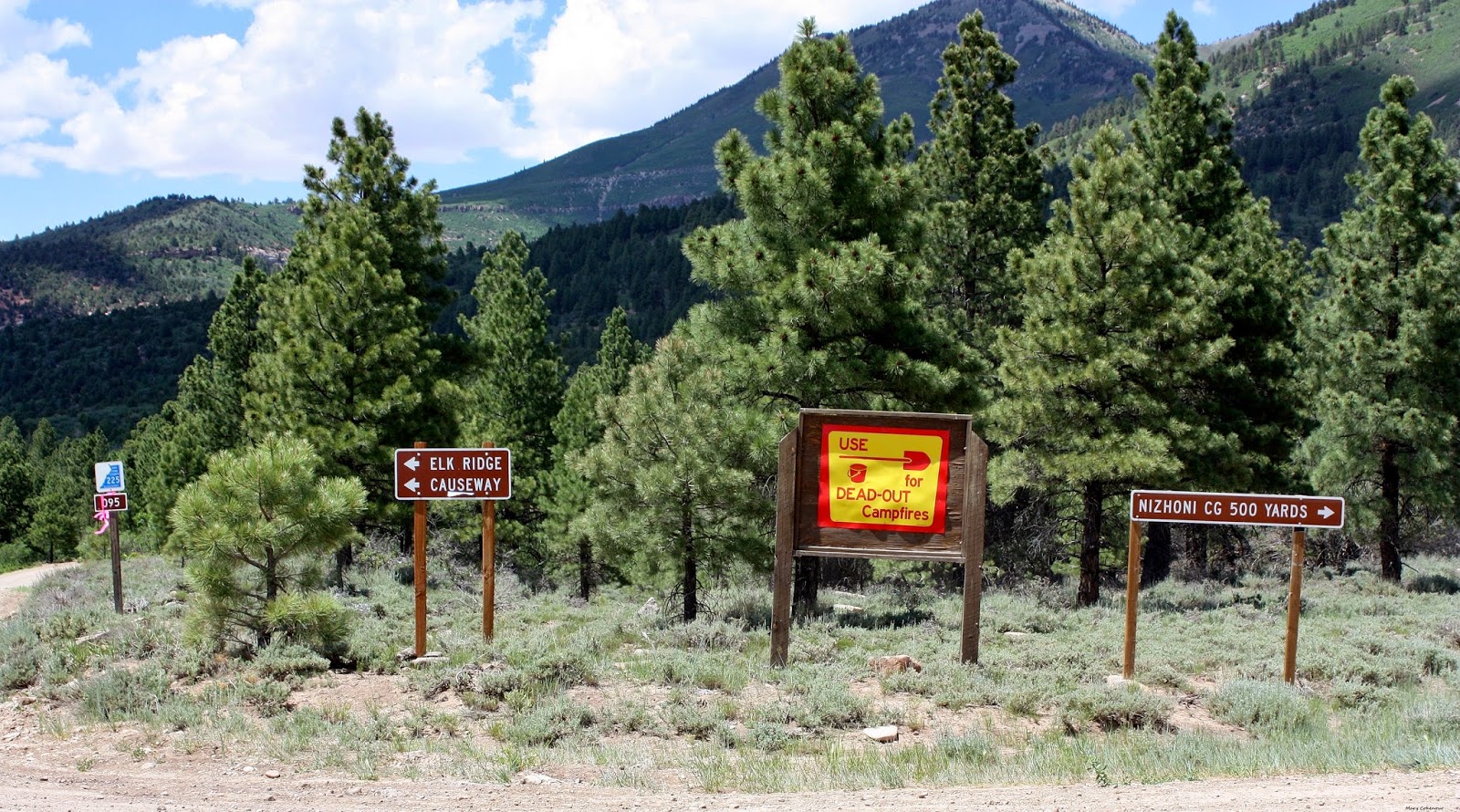 You will come to a junction which gives you the choice of continuing to the right onto FR 079, or making the left onto FR 095 and that is where we're going today.  As you can see in the photo FR 095 is also named San Juan County Road 225 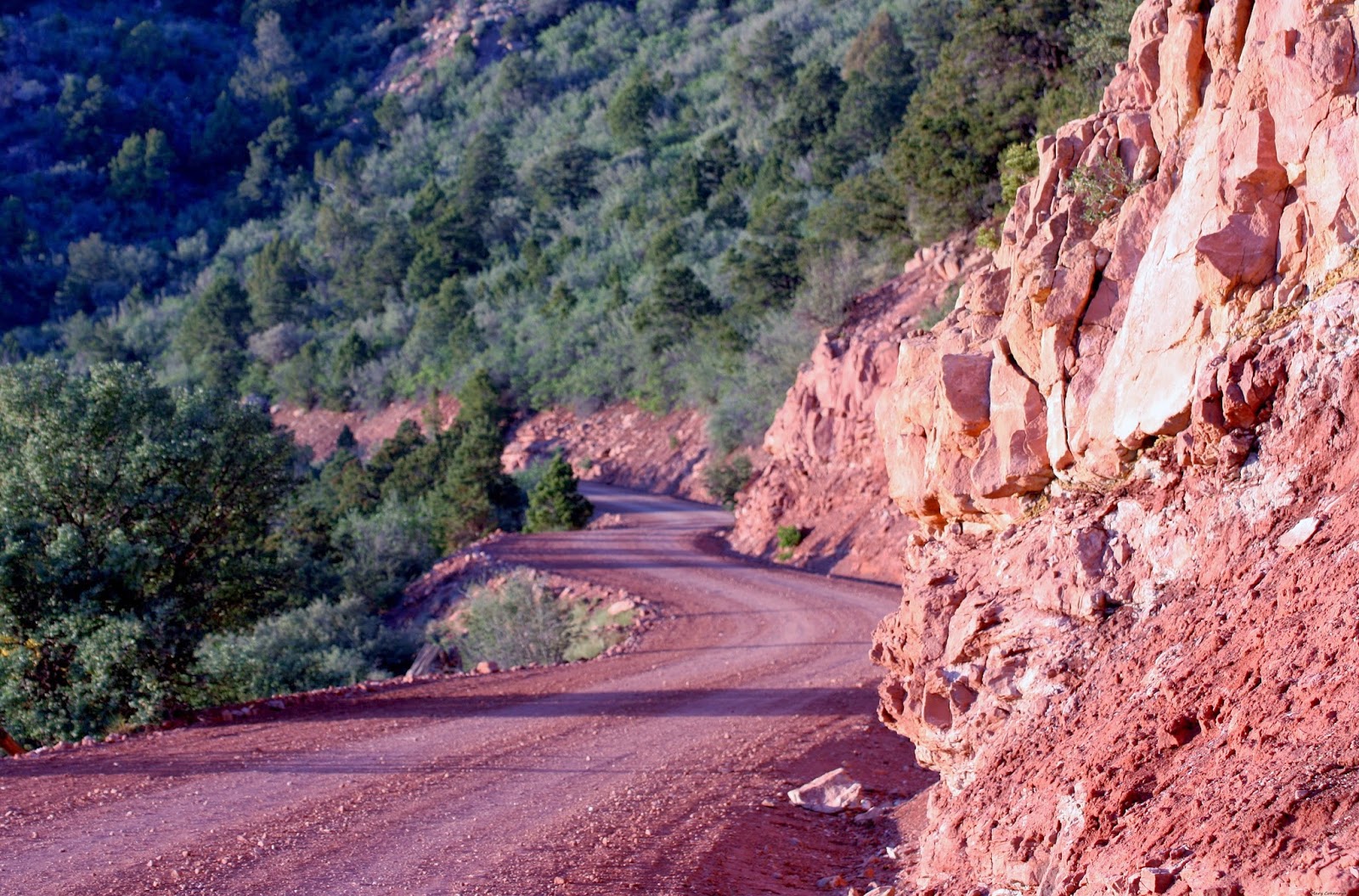 Part One of this trip will only be about 32 miles, but don't be fooled into thinking, "great, this will take no time at all"....very, very wrong.  The gravel road ends quickly and becomes...well, look at the photo...graded dirt; this road is winding throughout the mountains, sometimes wide, sometimes narrow, no guardrails; that is why you need a small to mid-size vehicle (4 wheel drive preferably) that isn't overly large; definitely no huge trucks or RV campers!  Deep breaths, relax, you can do this!!! 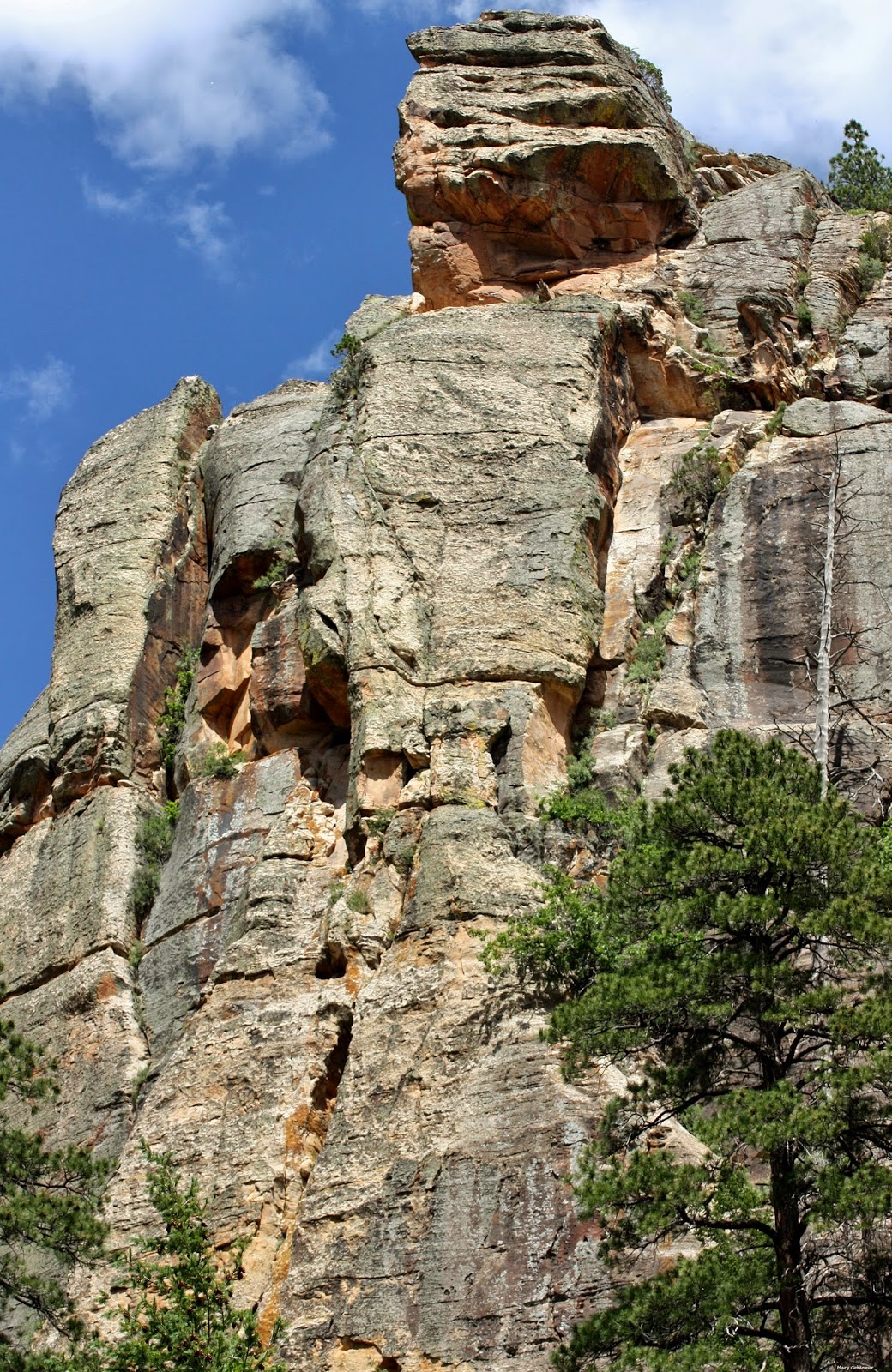 Besides looking downwards into the valleys and canyons, or entirely southward; you need to remember to also look up and to the north, or you will miss some outstanding sites.  For instance, about 2 miles after you've begun on FR 095, to the right will be some high walls of gray stone; look more closely and you will see caves up in those walls.  These are the Dry Wash Cave Ruins at an elevation of 7900 feet above sea level; dating back to 1250 A.D., the caves were used for food storage.  The trailhead (385 or 5385) can be driven partway and then hiked the rest of the way; the scenery is beautiful in the forest, it is quiet except for the sound coming from the flow of water in the small creek you will have to cross.  While there, we were privy to a Weidemeyer's Admiral Butterfly taking rest at the creek; and Eaton's Penstemon grows out of the sandy, dry soil of the roadside walls.
﻿ 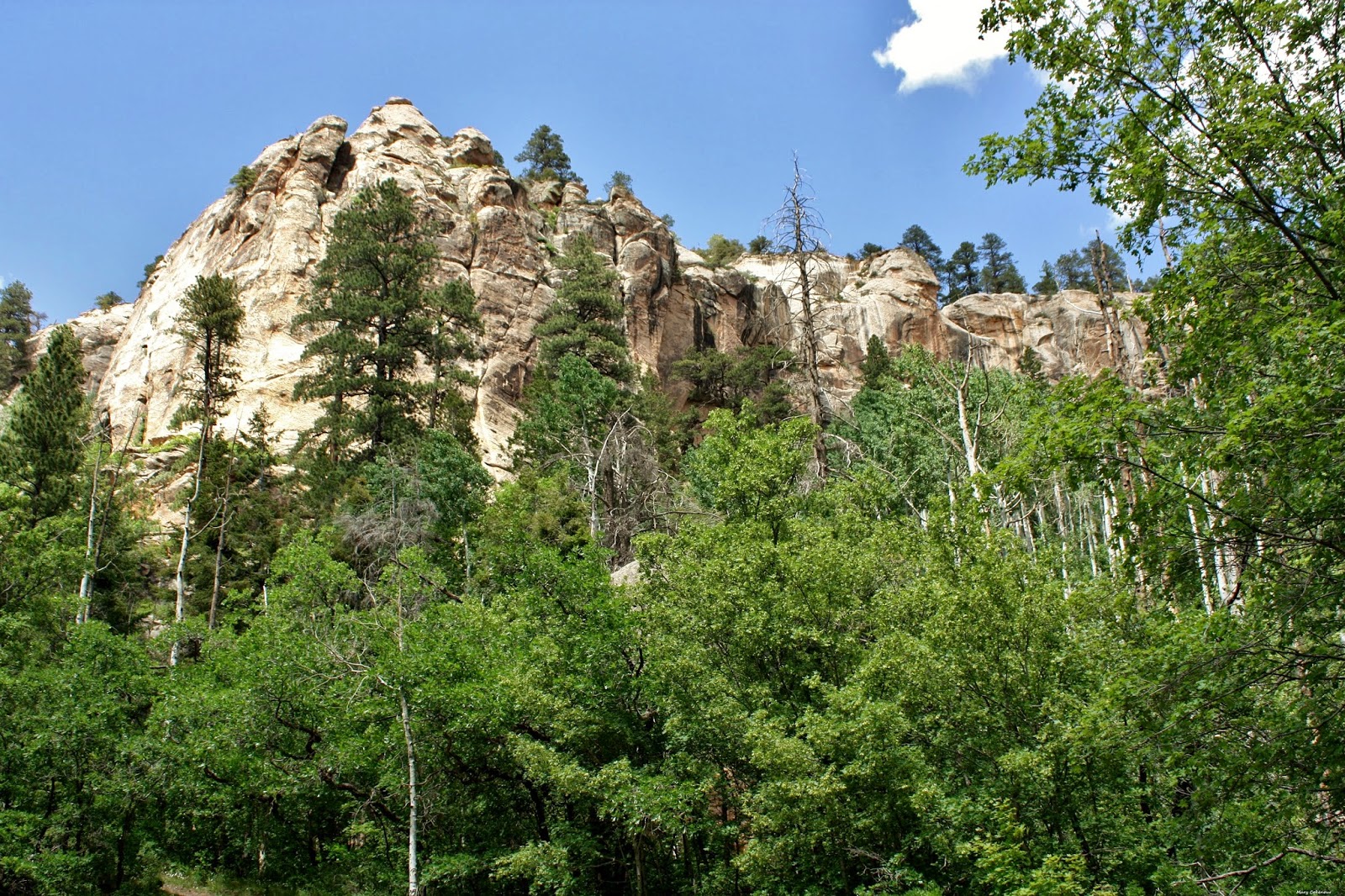 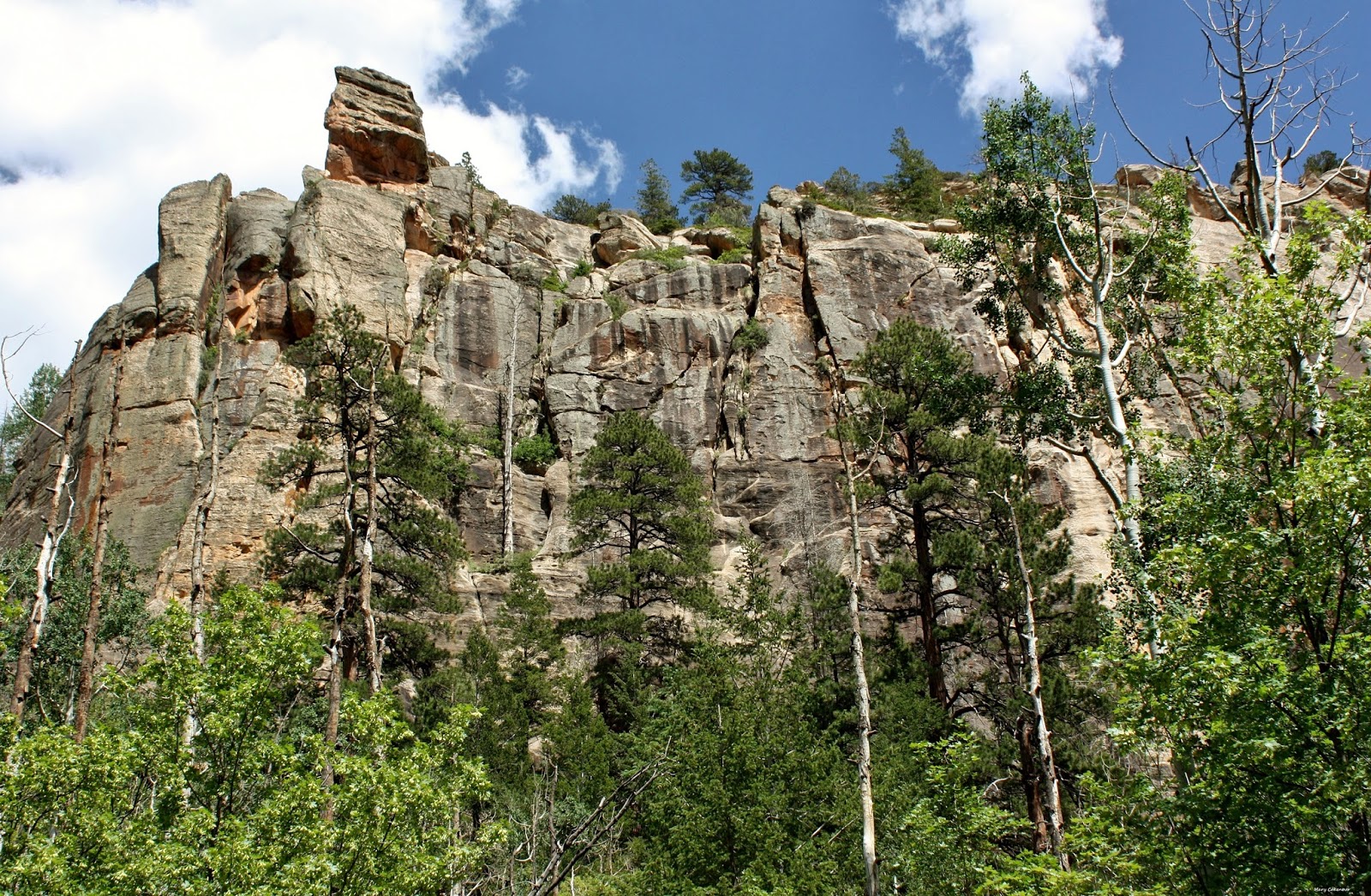 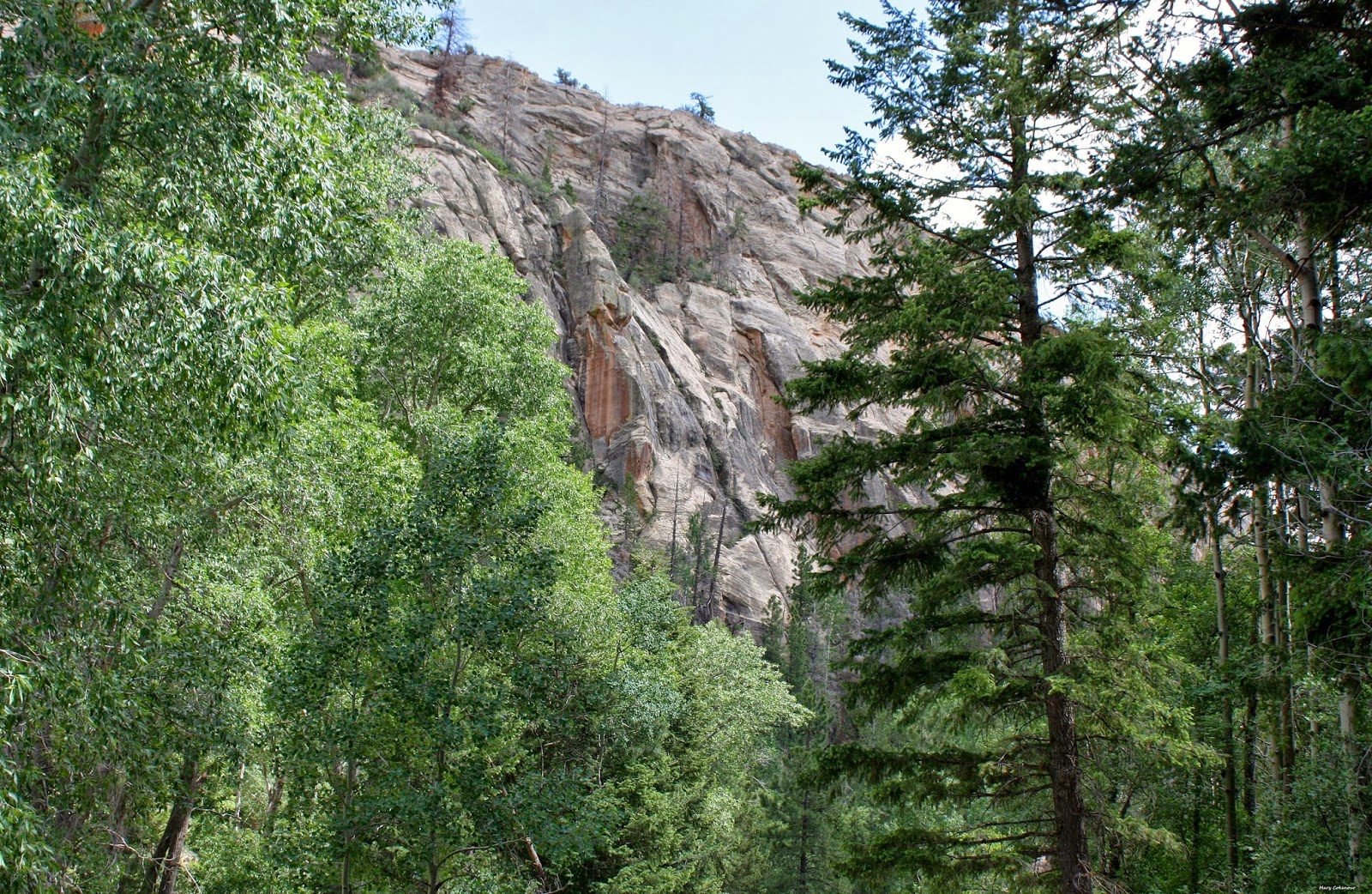 
To the south, Dry Wash continues on and you can also see the northern end of Allen Canyon. 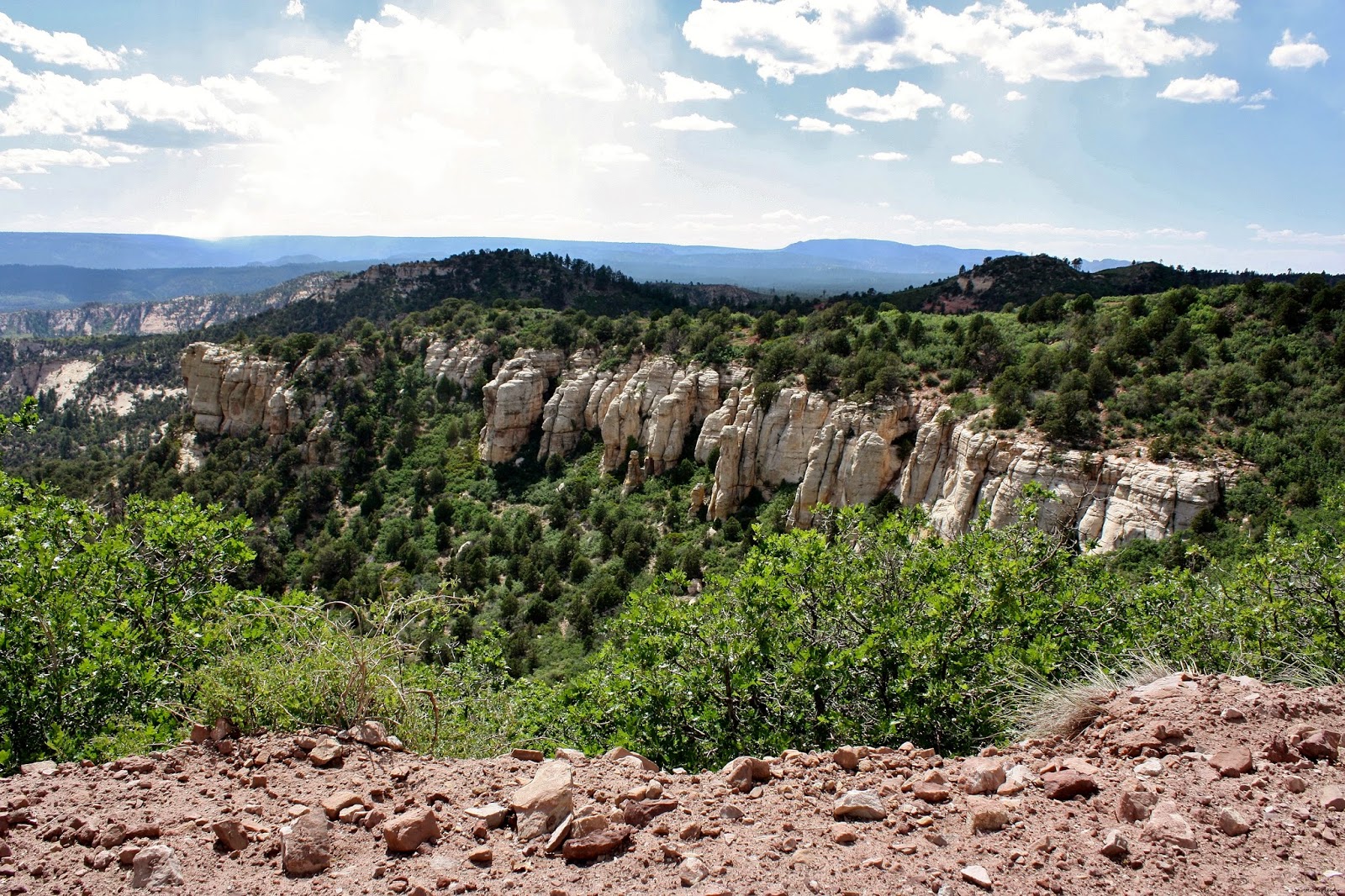 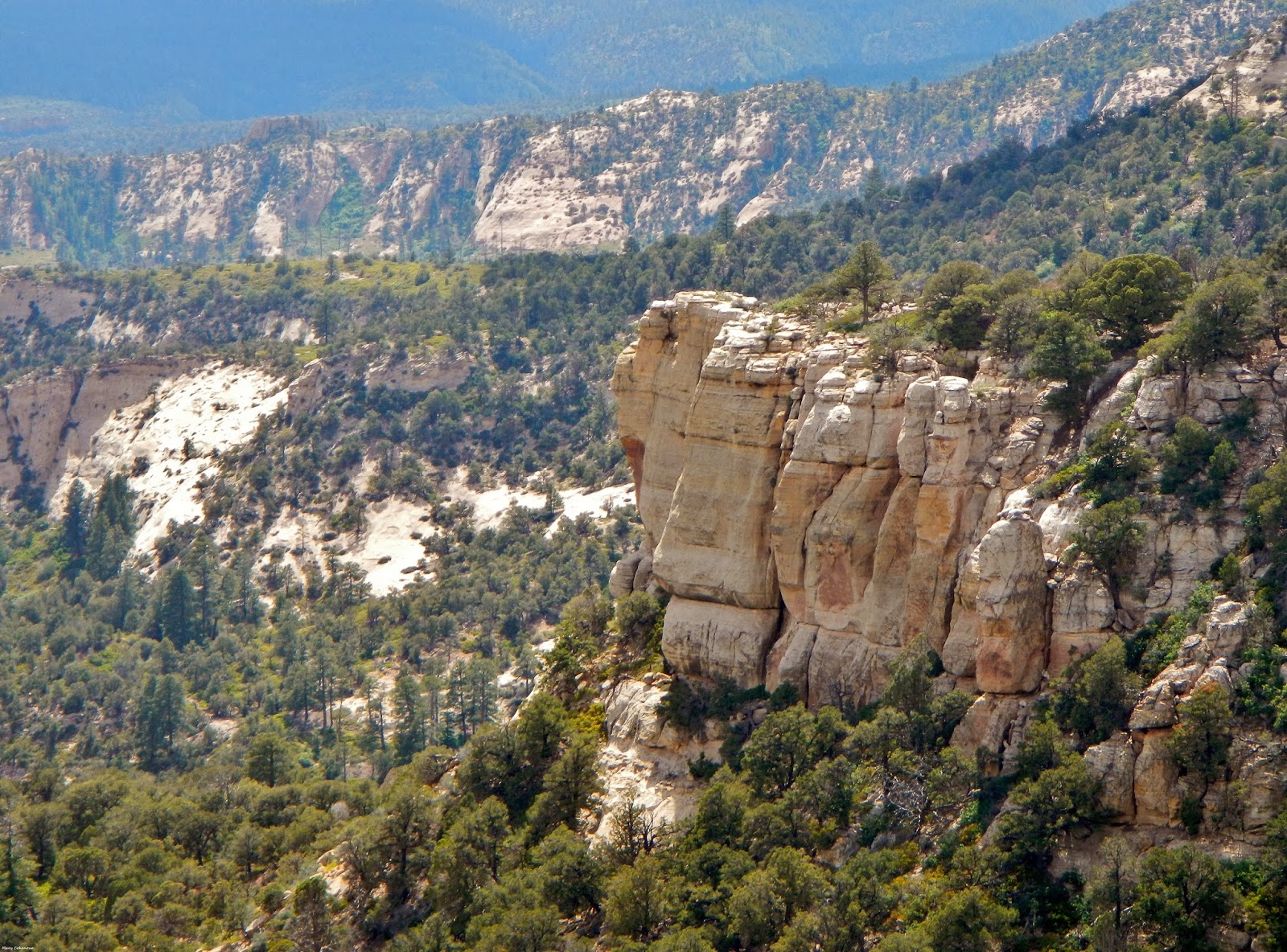 Thankfully, many of the trailheads are marked with signs of some kind, whether it is an actual "name" or "number" sign, it still gives you a rough idea of where you are, especially when trying to match it up to a point on a map.  Along the way will be the Chippean Rocks which extend down to Chippean Ridge and Chippean Canyon. 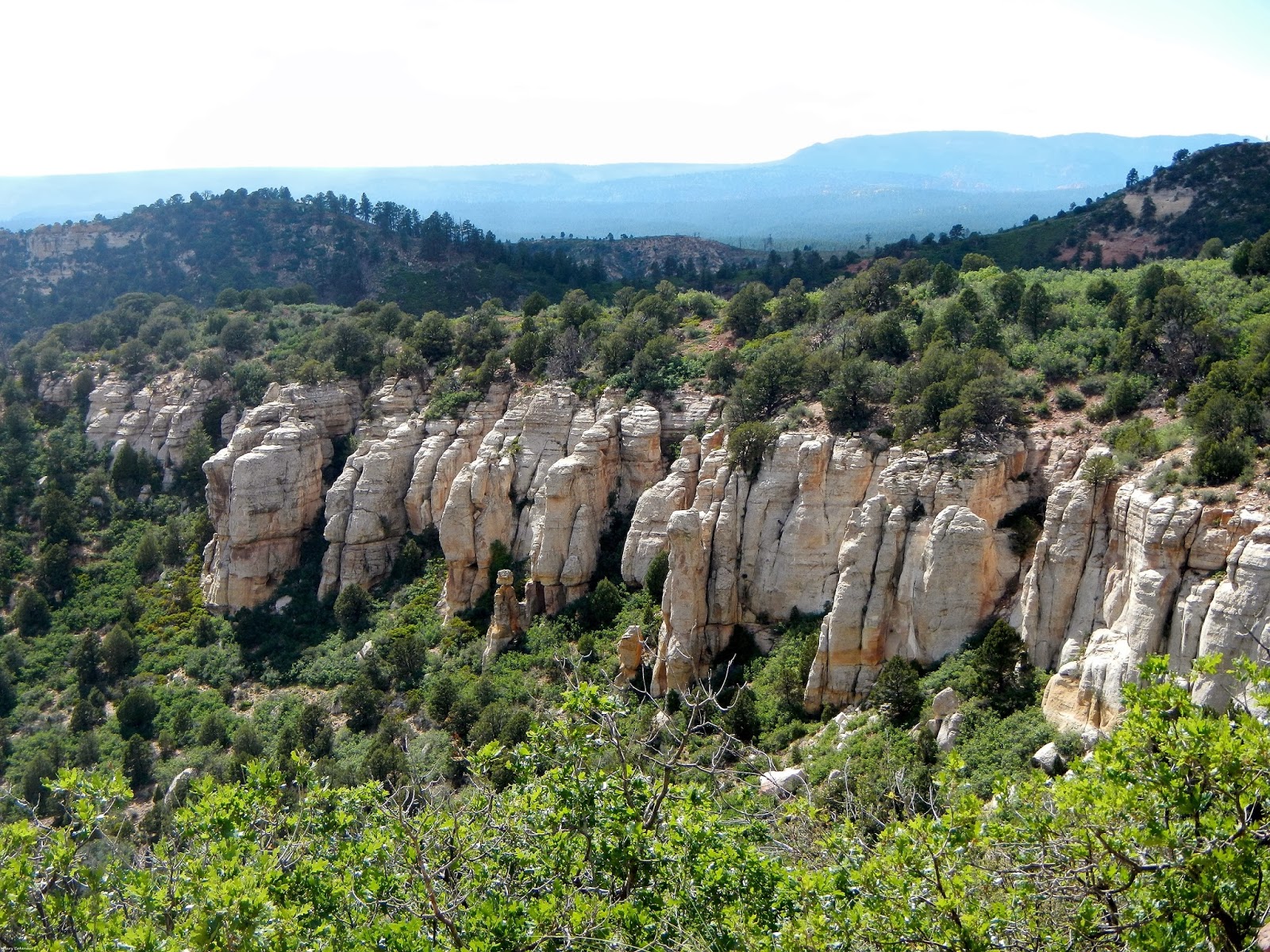 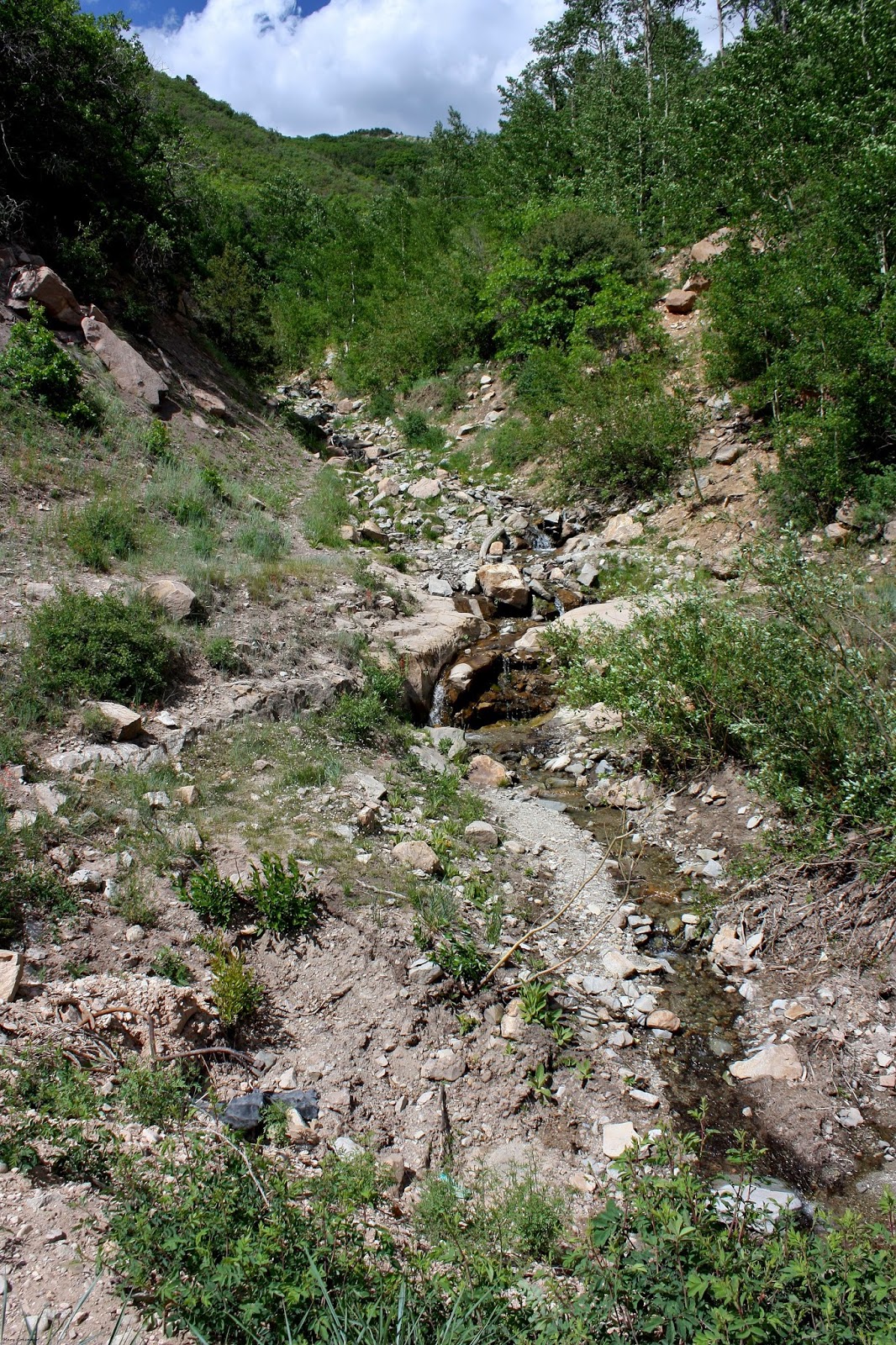 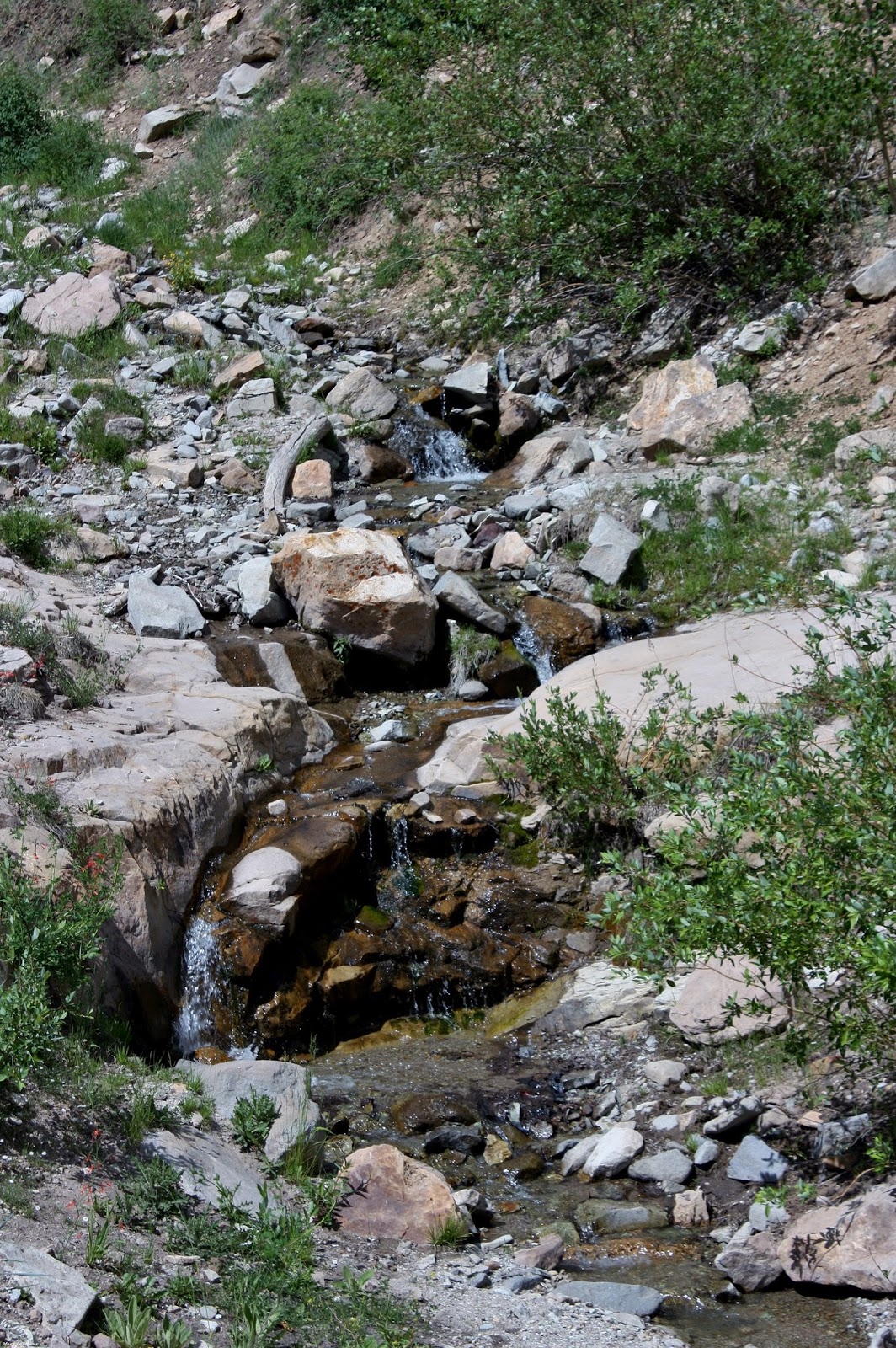 Now we had left the house about 7:30 in the morning, so by lunch time we were looking forward to the picnic I had packed.  We saw a small stream flowing down the hillside; the road way was wide enough at this point for us to pull over, park, eat our lunch while gazing out into the canyons, and not impede traffic at all.  We were somewhere between Dry Wash and Skyline Trail; and speaking of traffic, we didn't see another soul until getting onto FR 088 heading to Elk Ridge. 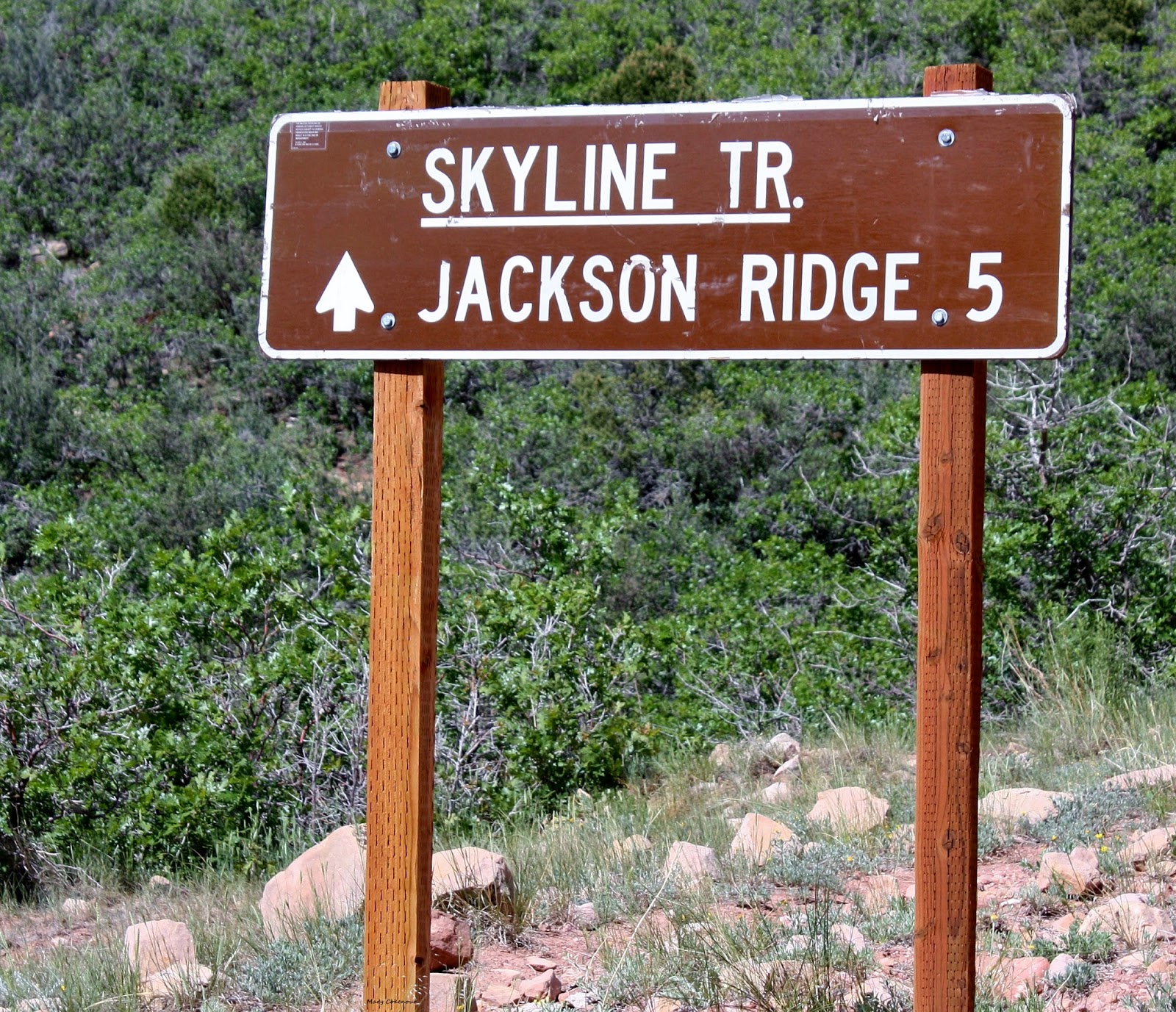 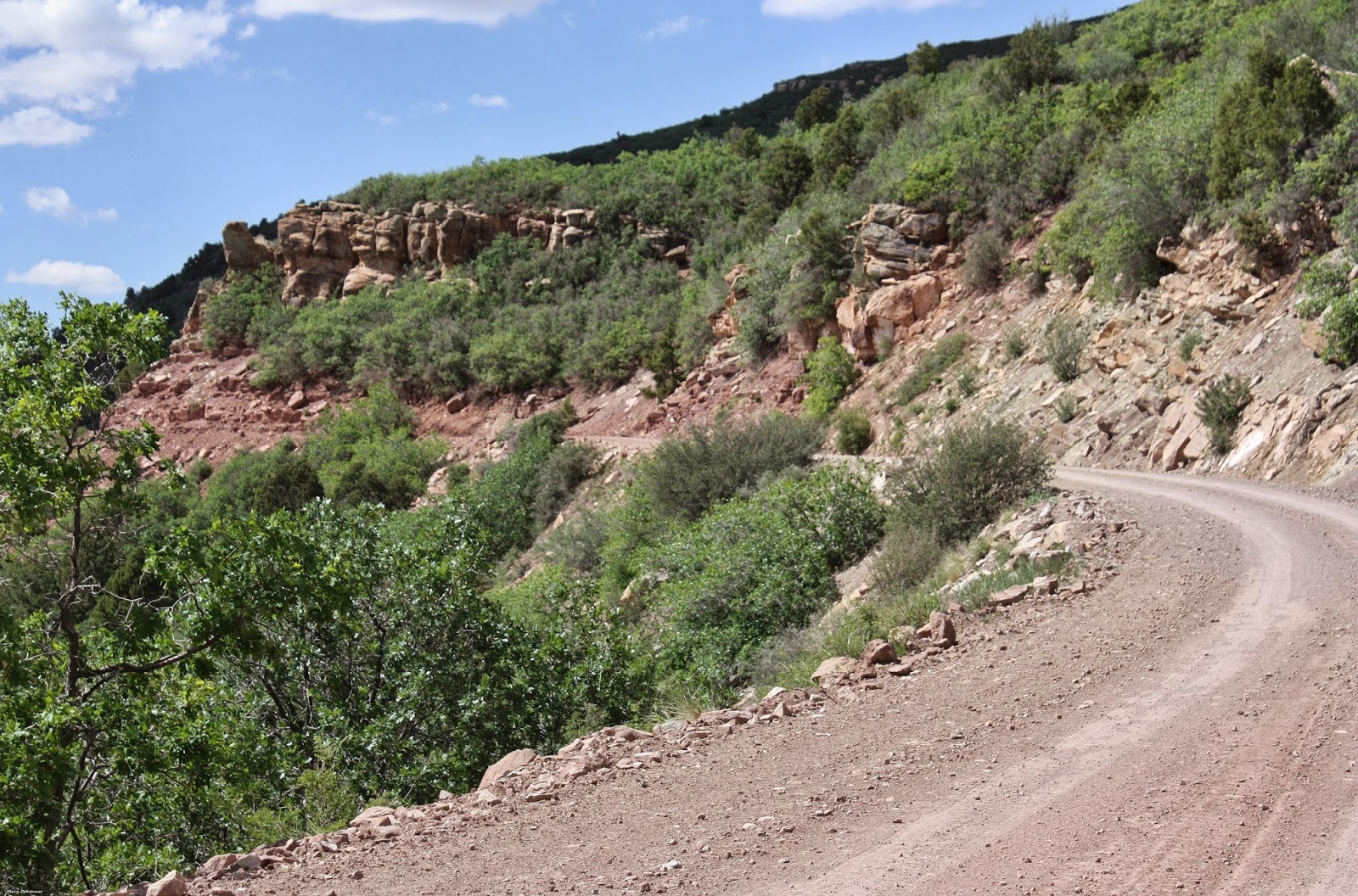 Here are those views I just mentioned...enjoy! 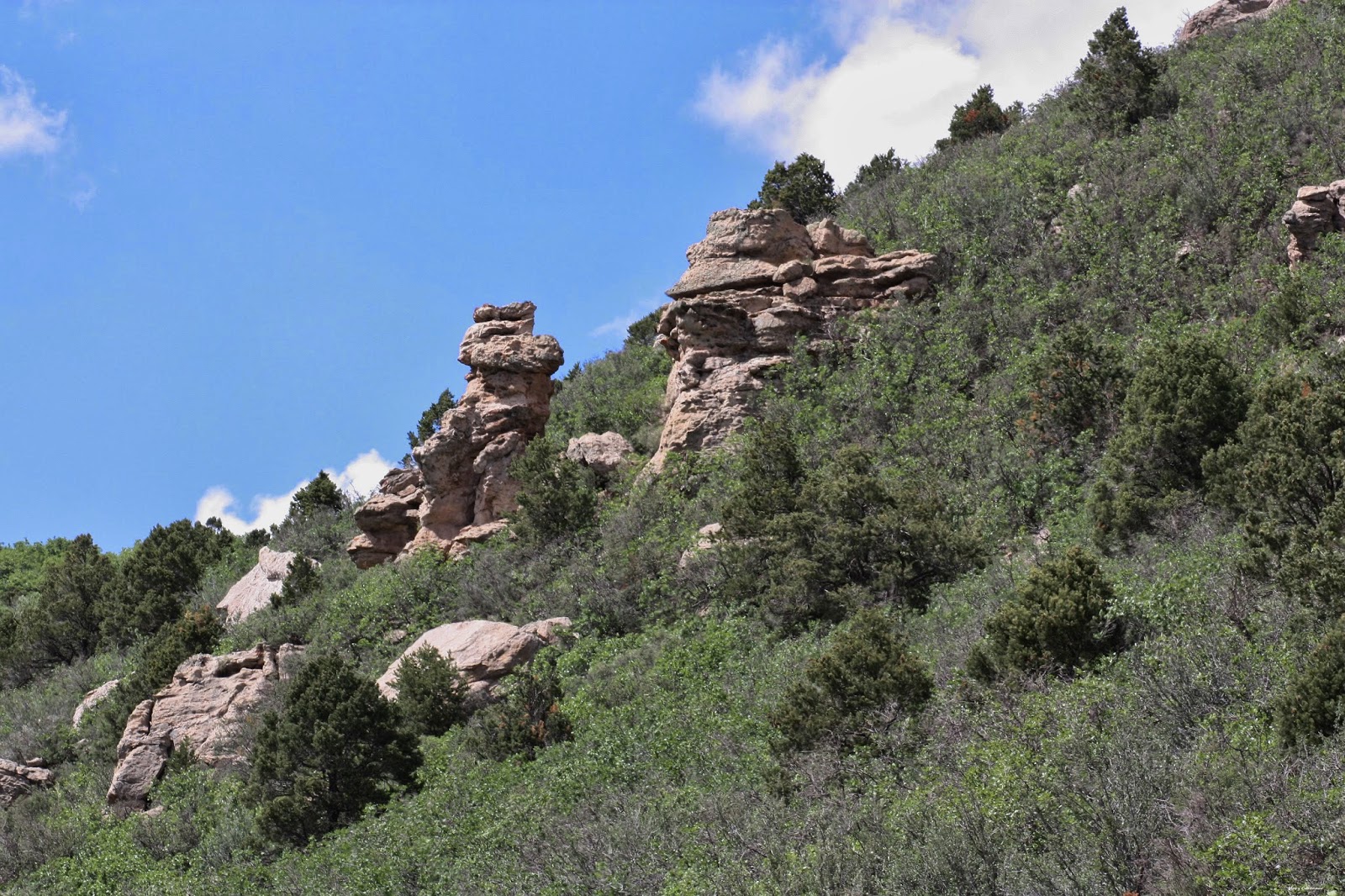 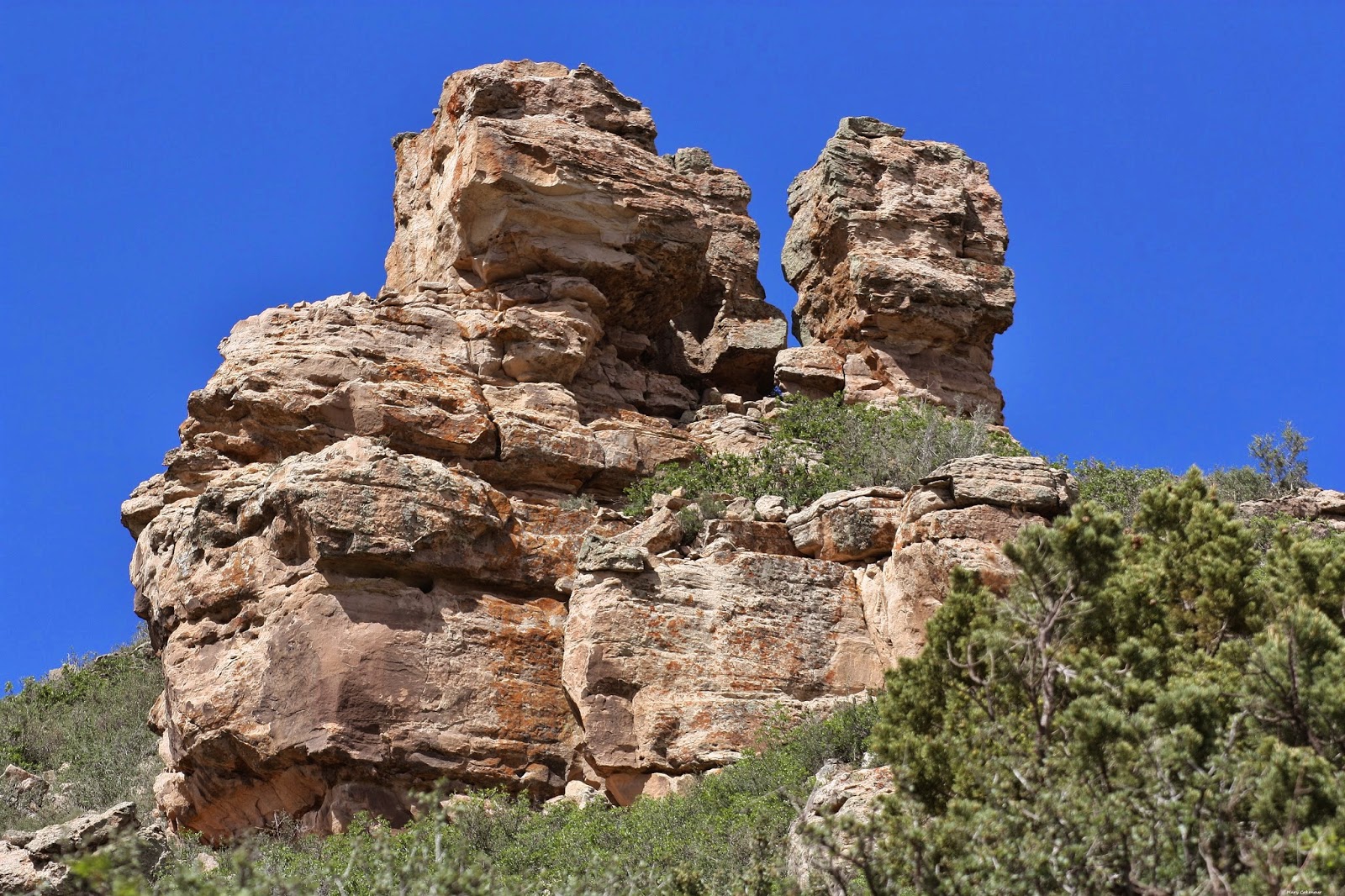 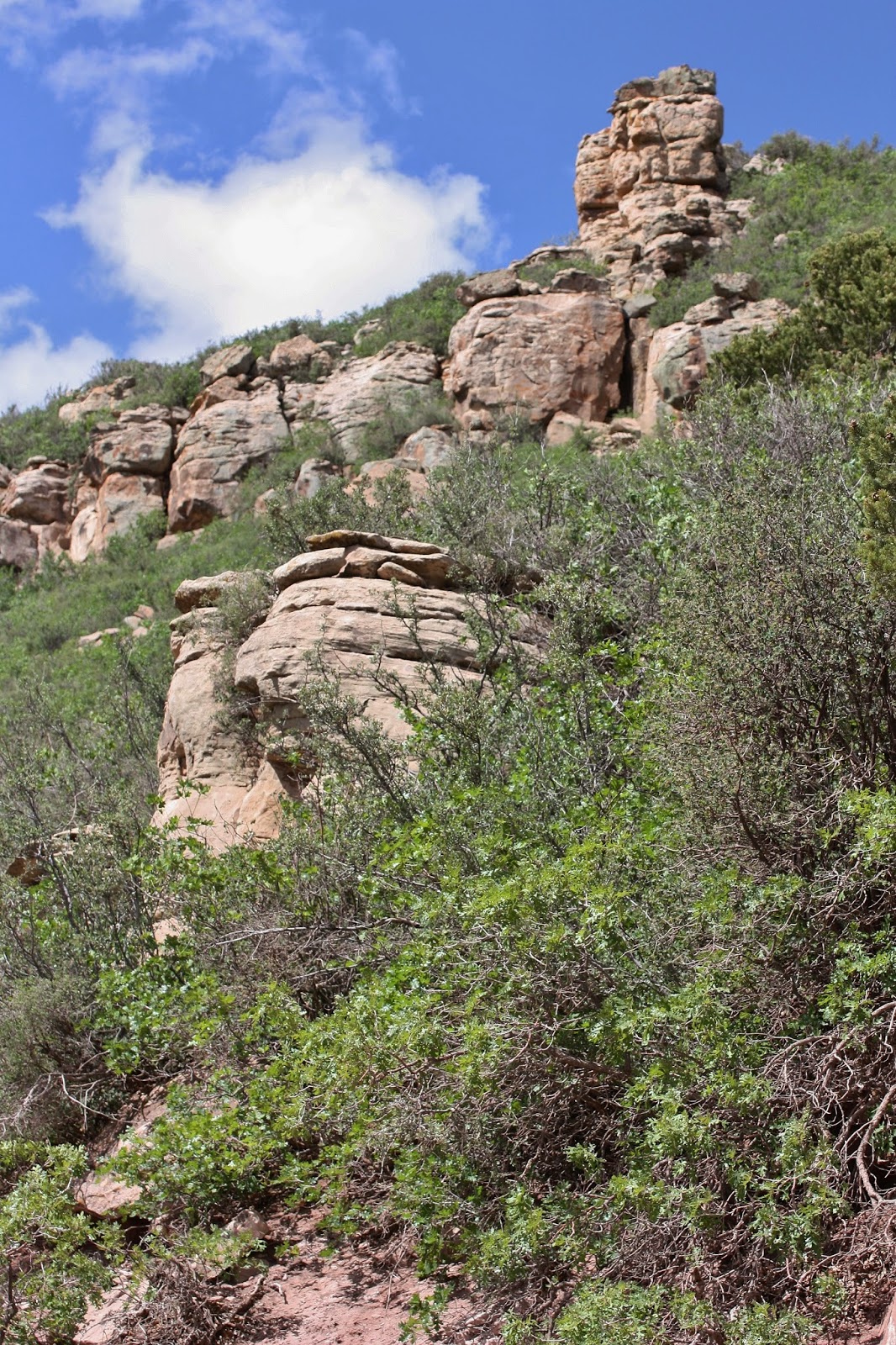 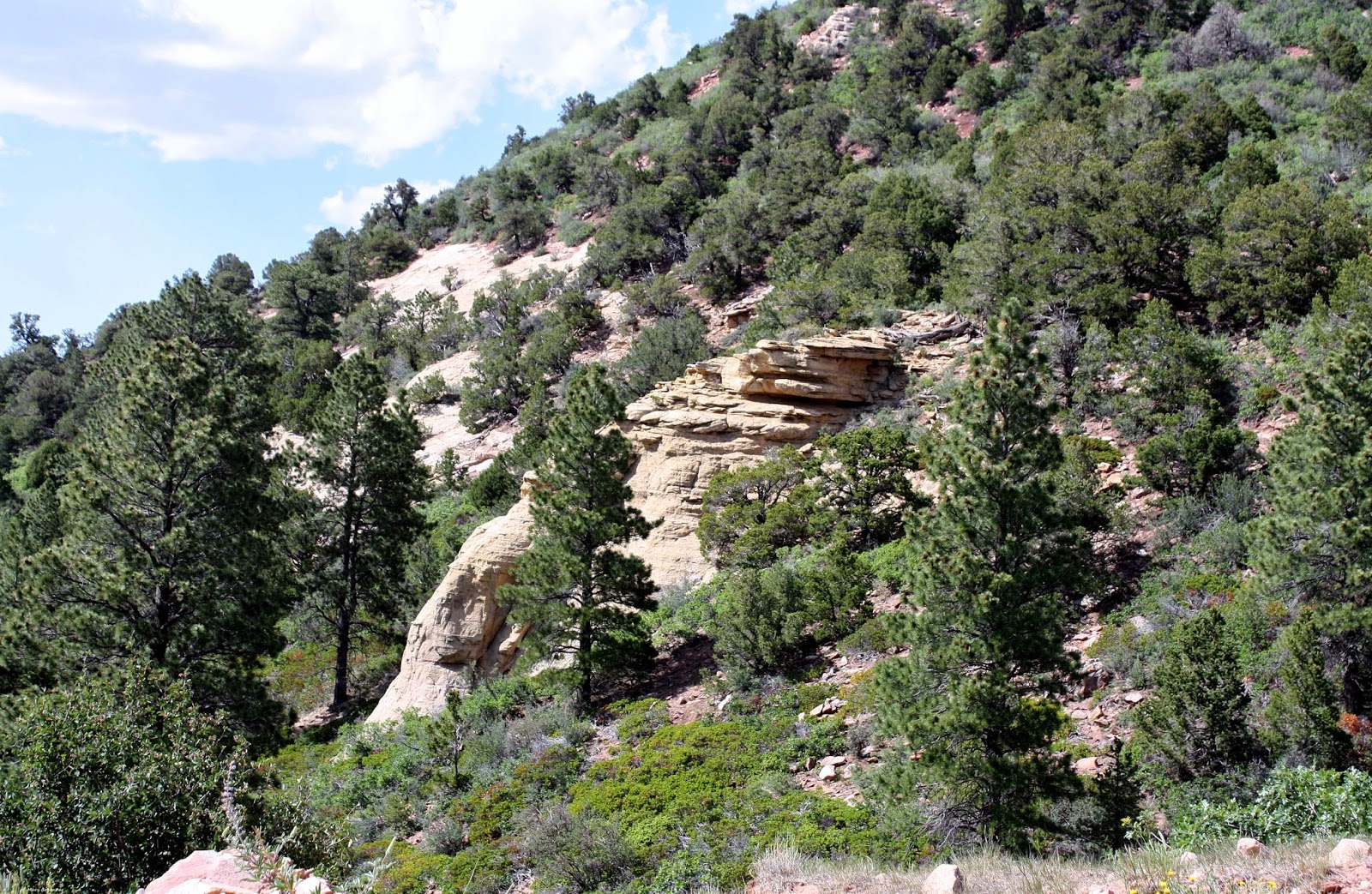 Reaching The Causeway Overlook (FR 095 is also called "Causeway Road" on some maps) is about the halfway mark for this stretch of road.  Looking out between the sandstone hills, Deep Canyon lies beyond; to the right are the trailheads for Tuerto and Trough Canyons, and Shay Ridge.  Standing at the Overlook, the wind was strong up there; the gravel and dirt road made for slick footing.

Next major viewpoint is Maverick Point; timber, mostly Ponderosa Pine, was harvested in this area during the 1950s and 1960s; there are also abandoned uranium mines in the area.  While at the Overlook, we were treated to an aerial show by a red tailed hawk. 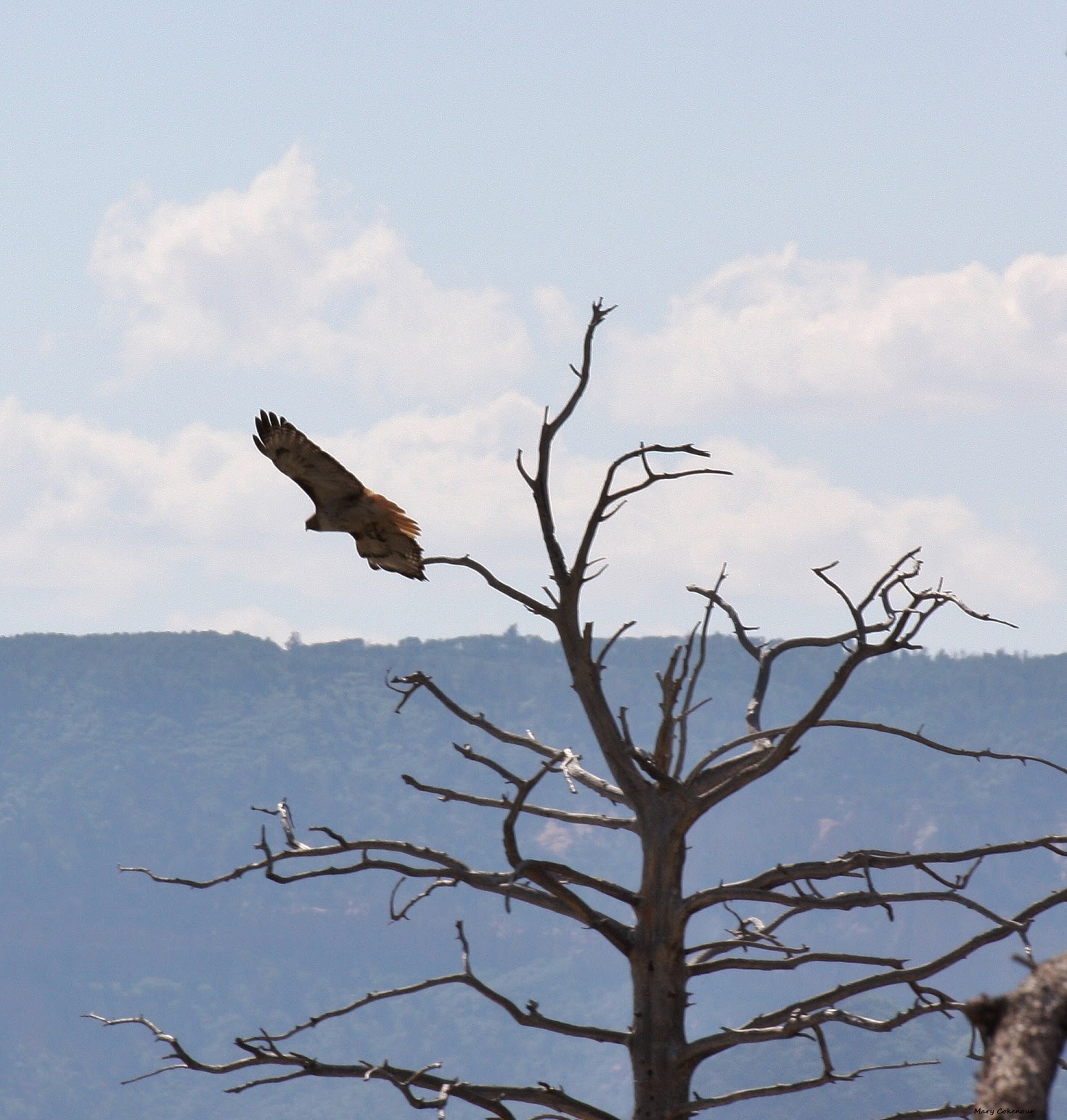 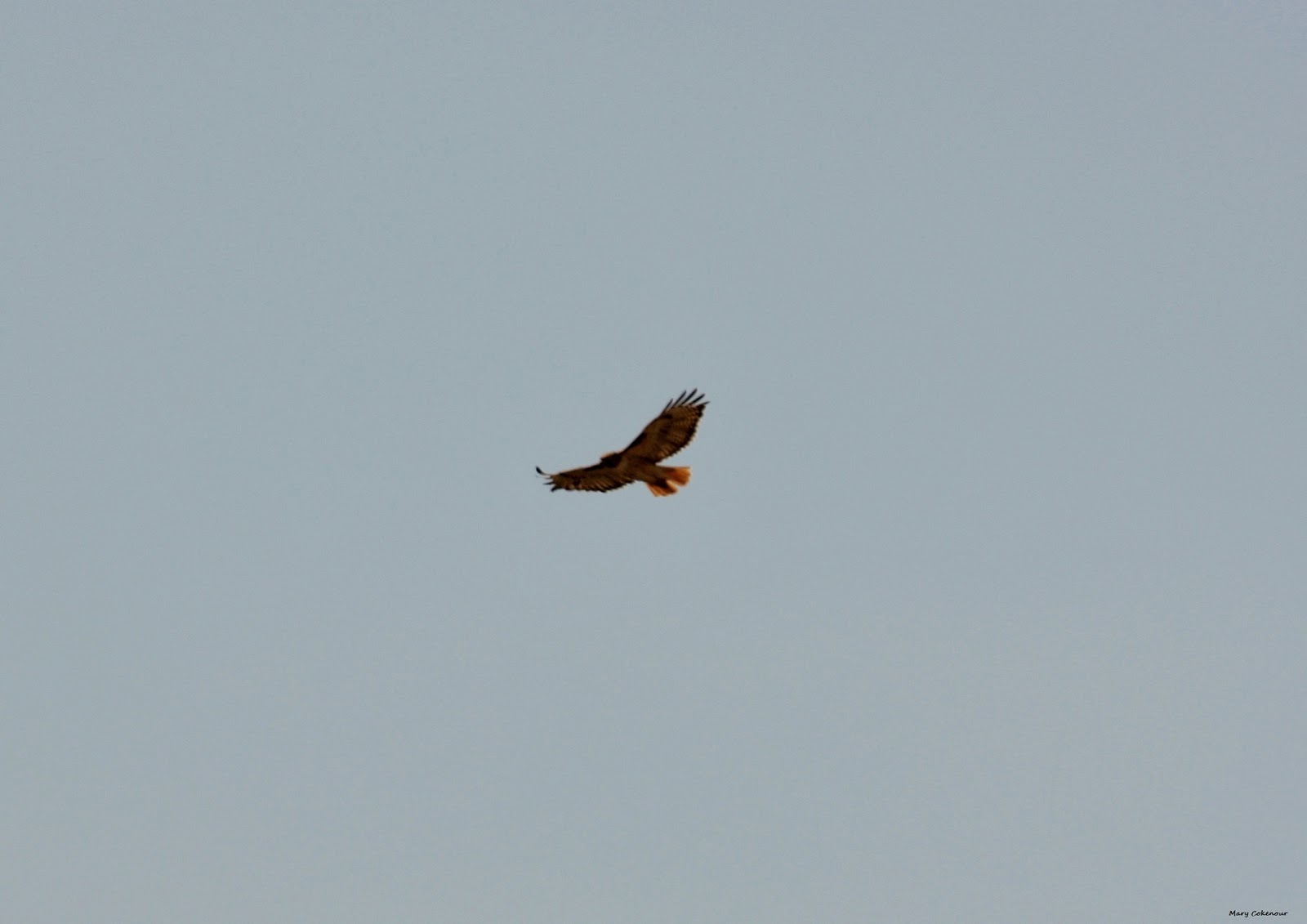 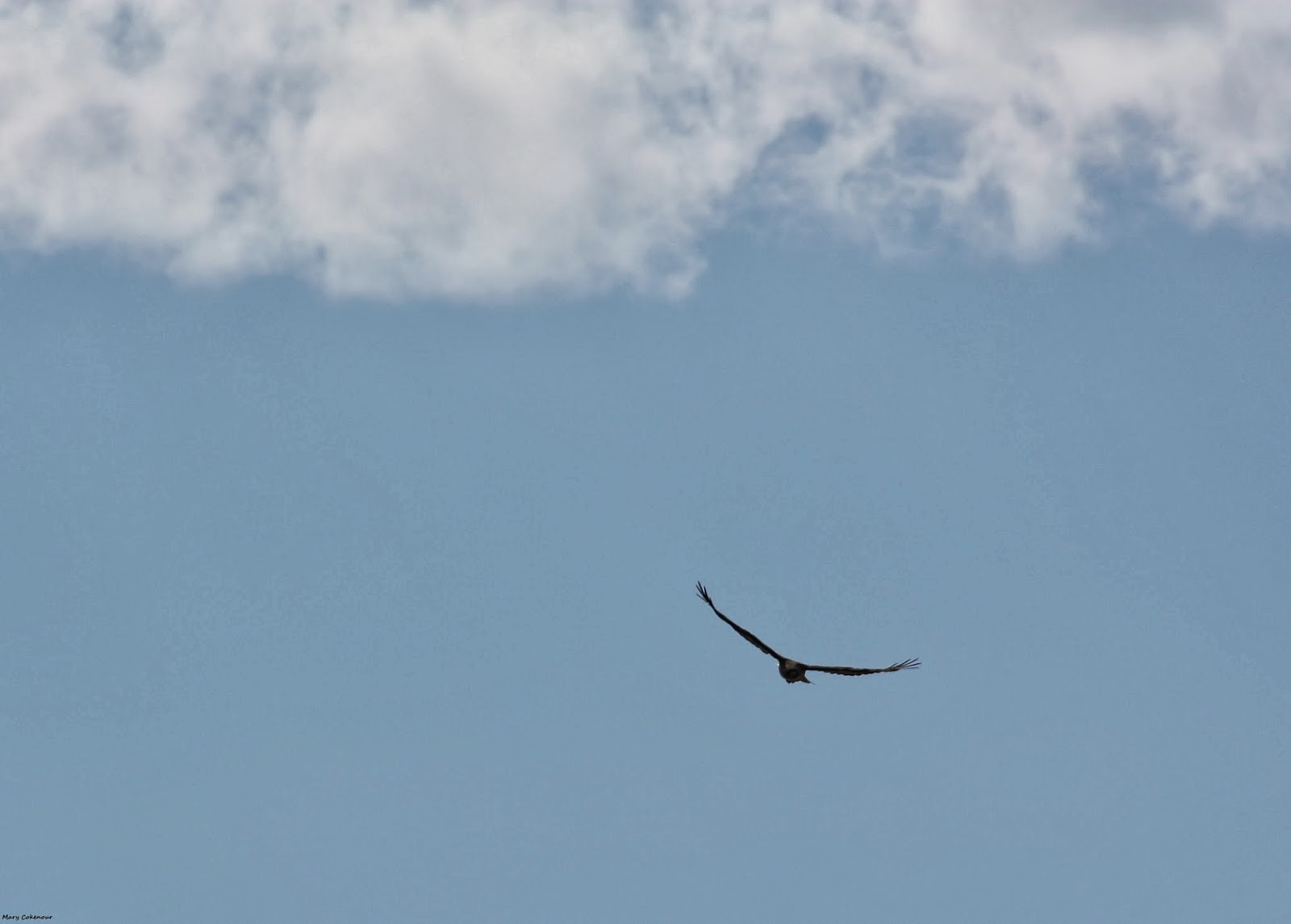 We passed two interesting formations and I'm presuming that one is Round Mountain, the other Skull and Crossbones Summit; only because their location is similar to what is listed on my maps.  A major problem of looking up information on the internet is that most sites will put a brief description of the formation, mountain, summit, hill, what-have-you; put the location via GPS coordinates or longitude-latitude points; but NO photos!!!  Seriously, these folks have the time to write down all these little details, but no time to take a photo of the place, so you know you're looking at the correct item.  Ridiculous!!!  Anyway, here are the photos that I have...

Seven Sisters Buttes had the same problem; geolocation, trail and hiking sites listed lots of location numbers, not one photo.  I used three search engines for images; for some odd reason I kept getting images of cookies, cakes, pastries or bakeries....don't ask me, I have no clue.  I figured out the photos I had by simply counting the number of peaks...yeppers, there are seven of them.  Using the zoom lens, I was able to look way out past Seven Sisters Buttes; lo and behold, there was Canyonlands National Park - Needles.


Congratulations, you've just traveled about 32 miles to reach the junction of FR 088 - Gooseberry Road aka Elk Ridge Road; you just have to love maps and how uniform they are.  The next 31 miles will be awesomely exciting as you wind your way down the Elk Ridge on a dirt road just barely wide enough for two vehicles to pass, and a 1000 foot drop on one side.  So stay tuned for Part Two of this adventure, and get ready to grip those door handles tightly.