It's only January of 2014 and already folks are asking questions about camping in the Abajo Mountains; sorry, but the trails that go deeper into the Abajos will probably not be safe to travel until May, maybe June. The snow will begin melting around April which will make the trails quite muddy, and dangerous, during May; so June is usually the safest bet. Which brings me to an adventure that Roy and I took last June up in the Abajos along the trail from Dry Wash and all the way to Bears Ears. I'll be writing about the full adventure in other posts, but right now I want to tell about the fire in Dark Canyon Wilderness. 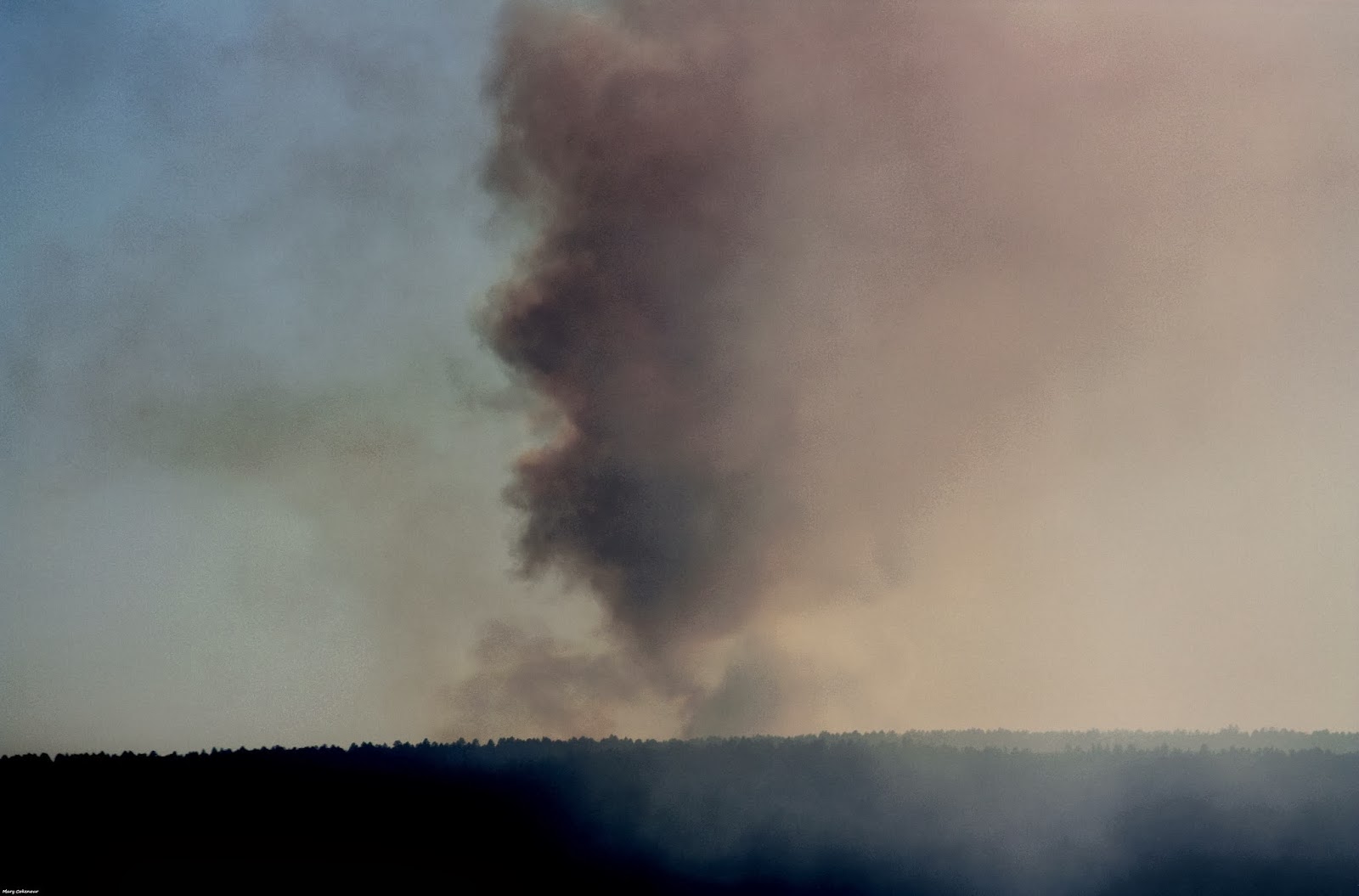 We first spotted the plume of smoke on the evening of Friday, June 14, 2013; we had just driven Johnson Creek Road (FR 079) from Monticello towards Blanding. We spotted the sign for Elk Ridge (FR 095) and were curious to where it lead; we had not planned on going far as sunset would be soon coming. As we drove the twists and turns nearing the Dry Wash area, we saw a plume of smoke in the far distance; an older gentleman riding an ATV came by at that moment to inform us that there was a fire in the Dark Canyon Wilderness. 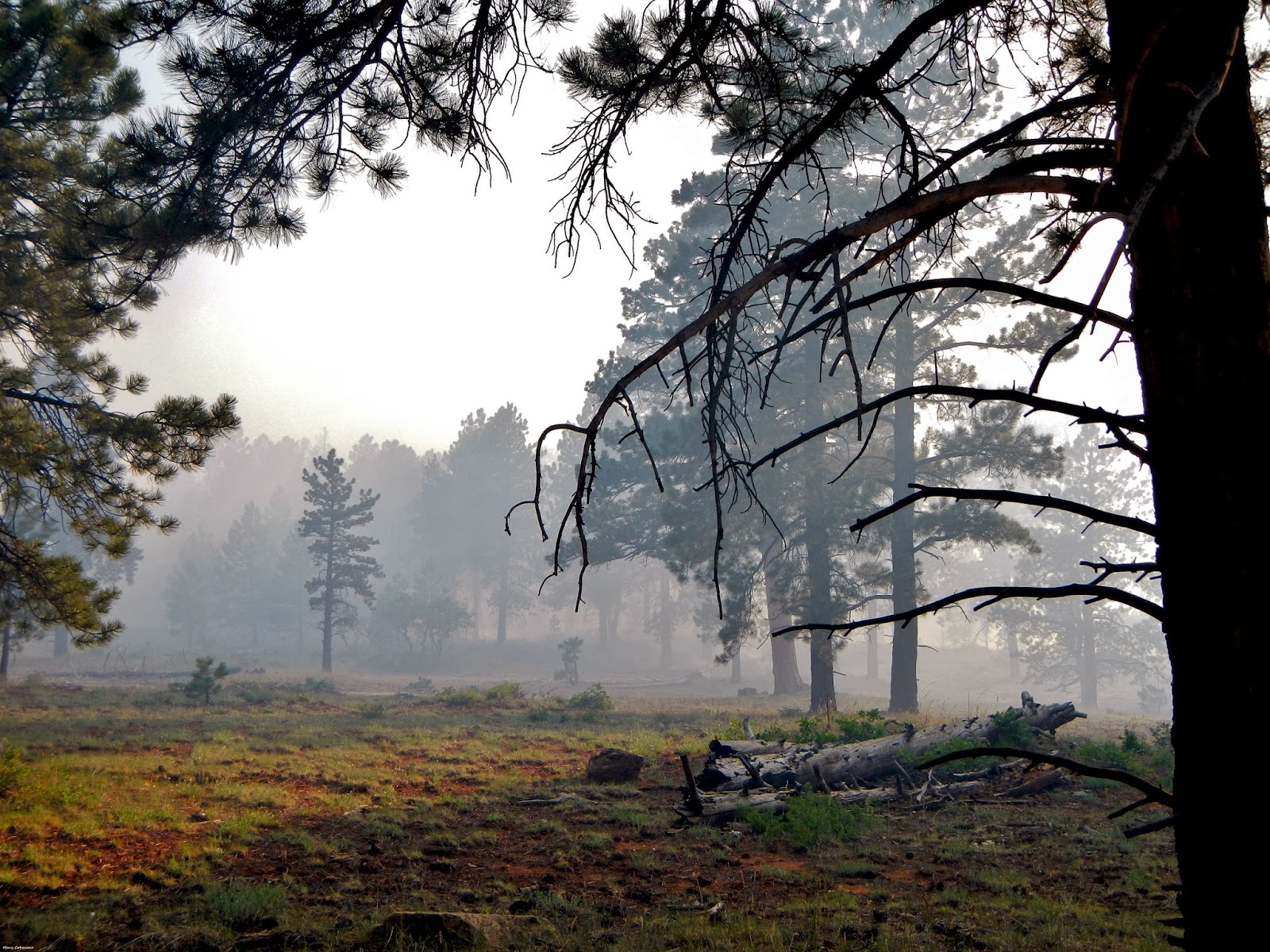 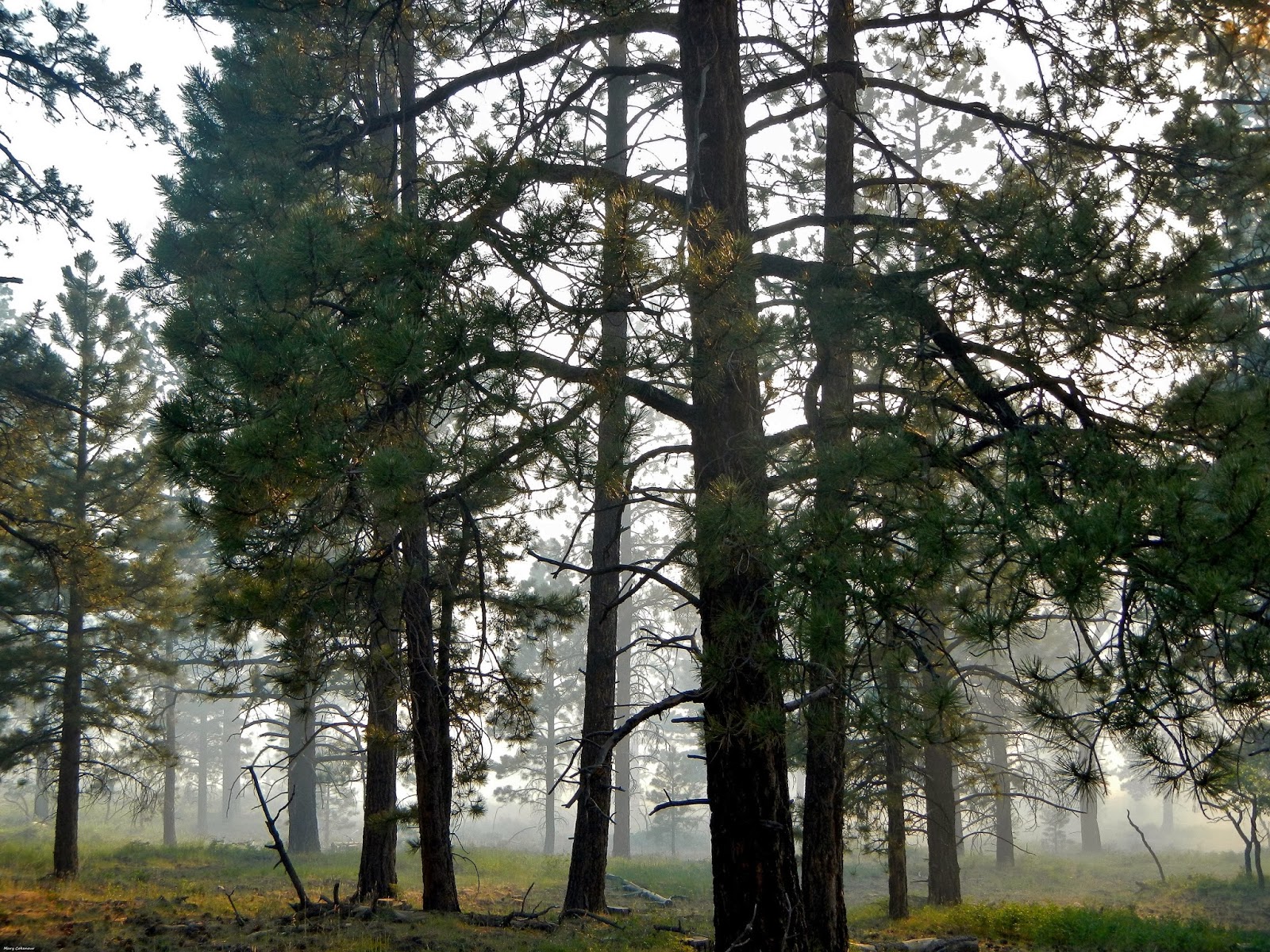 After purchasing a map of Elk Ridge at the Monticello Welcome Center, we decided to pack up a picnic and do the entire 63 mile trek on Sunday, June 16, 2013; again, will be posting all about that most excellent adventure later on.  We continually saw the smoke coming up from Dark Canyon, but no warning signs or forest service vehicles blocked FR 095 or FR 088, so we continued on; it was as we got to the forest/pasture areas along the Ridge that we became surrounded by the smoke.  Now one forest service vehicle had already passed by us by that time, the driver simply waving and smiling at us, so we weren't that concerned about the smoke.  It gave the forest a surreal and mysterious atmosphere; we drove more slowly remembering that animals will run from smoke and fire, so expected to see a rampage of forest creatures at any second. 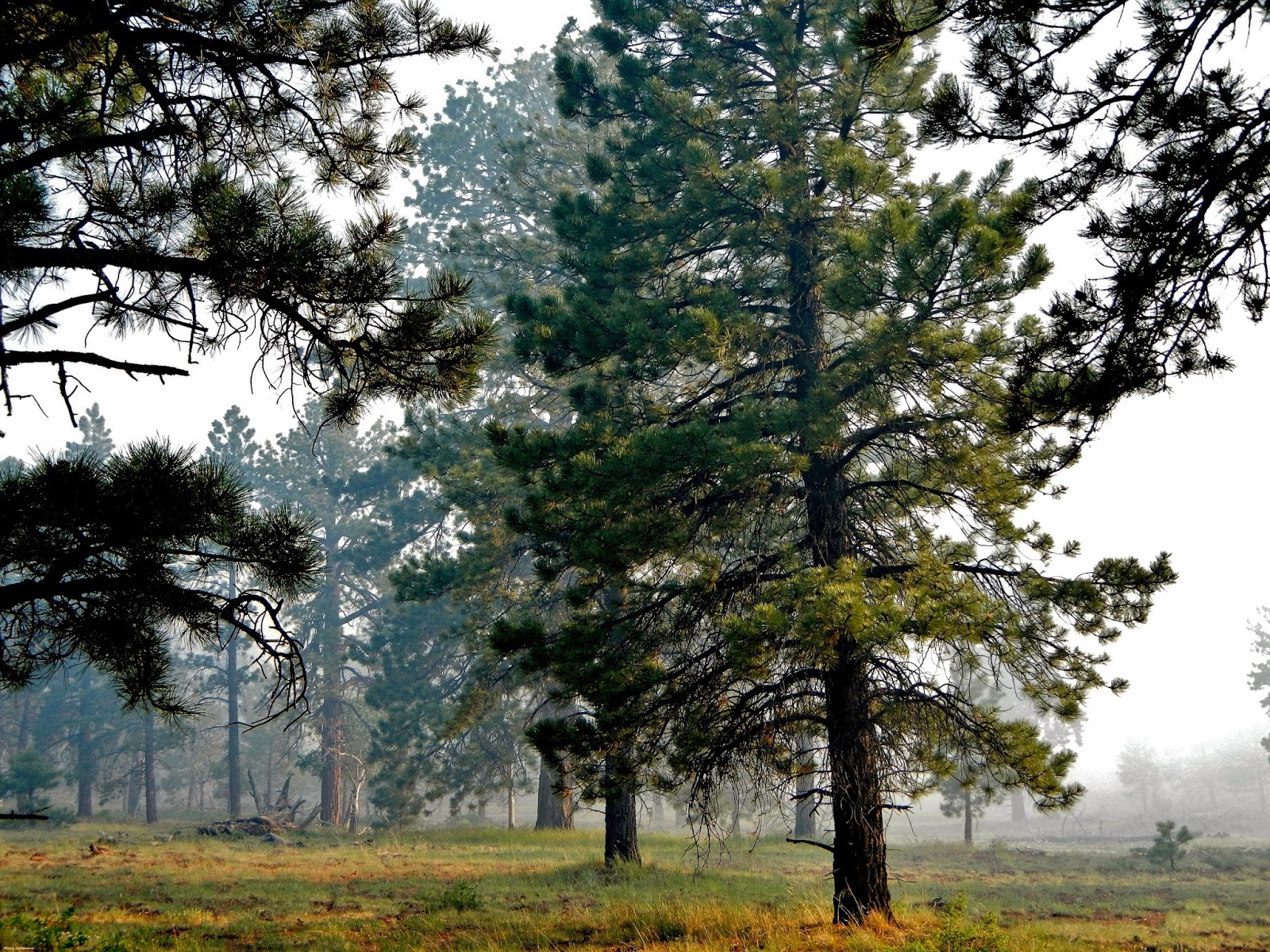 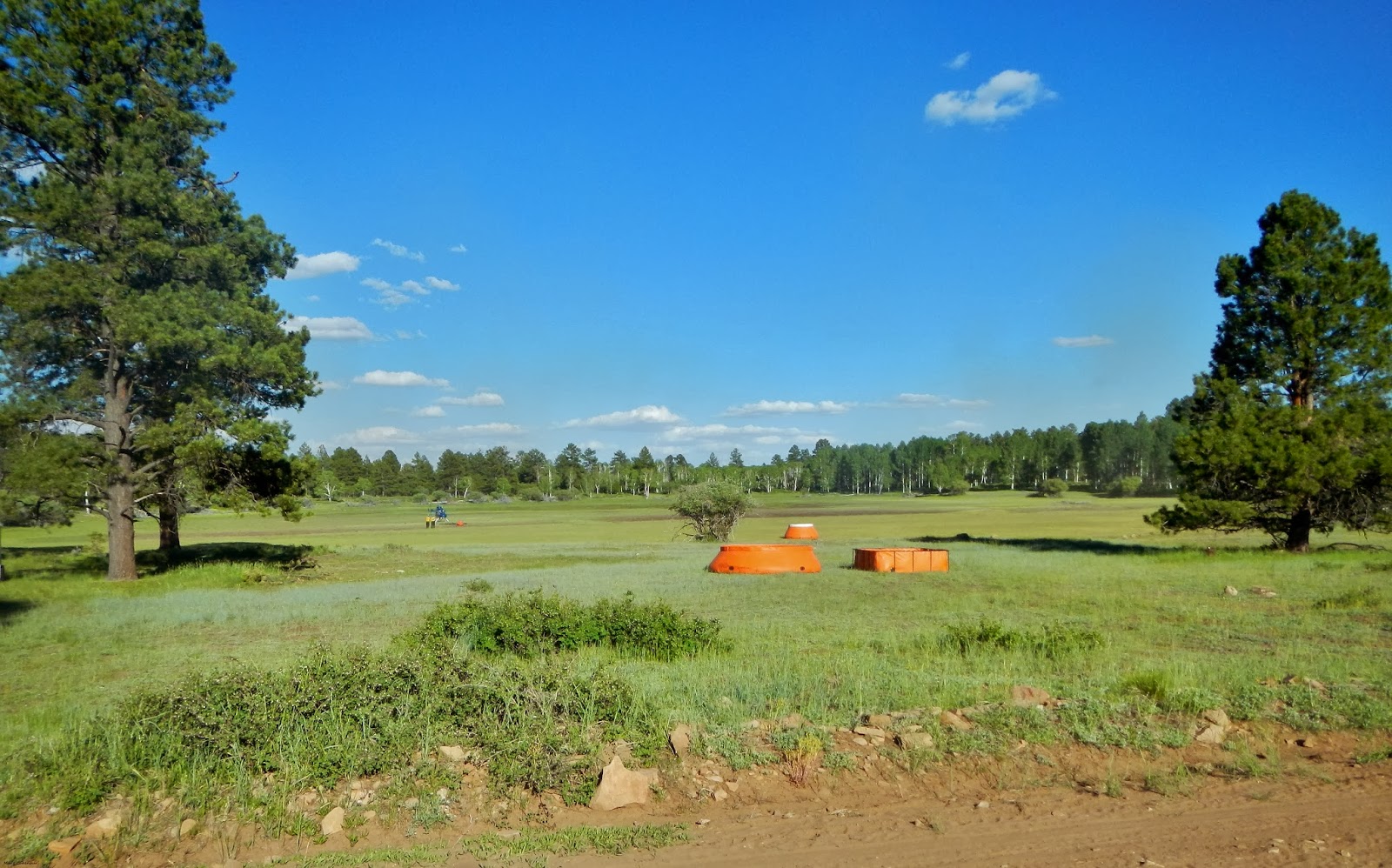 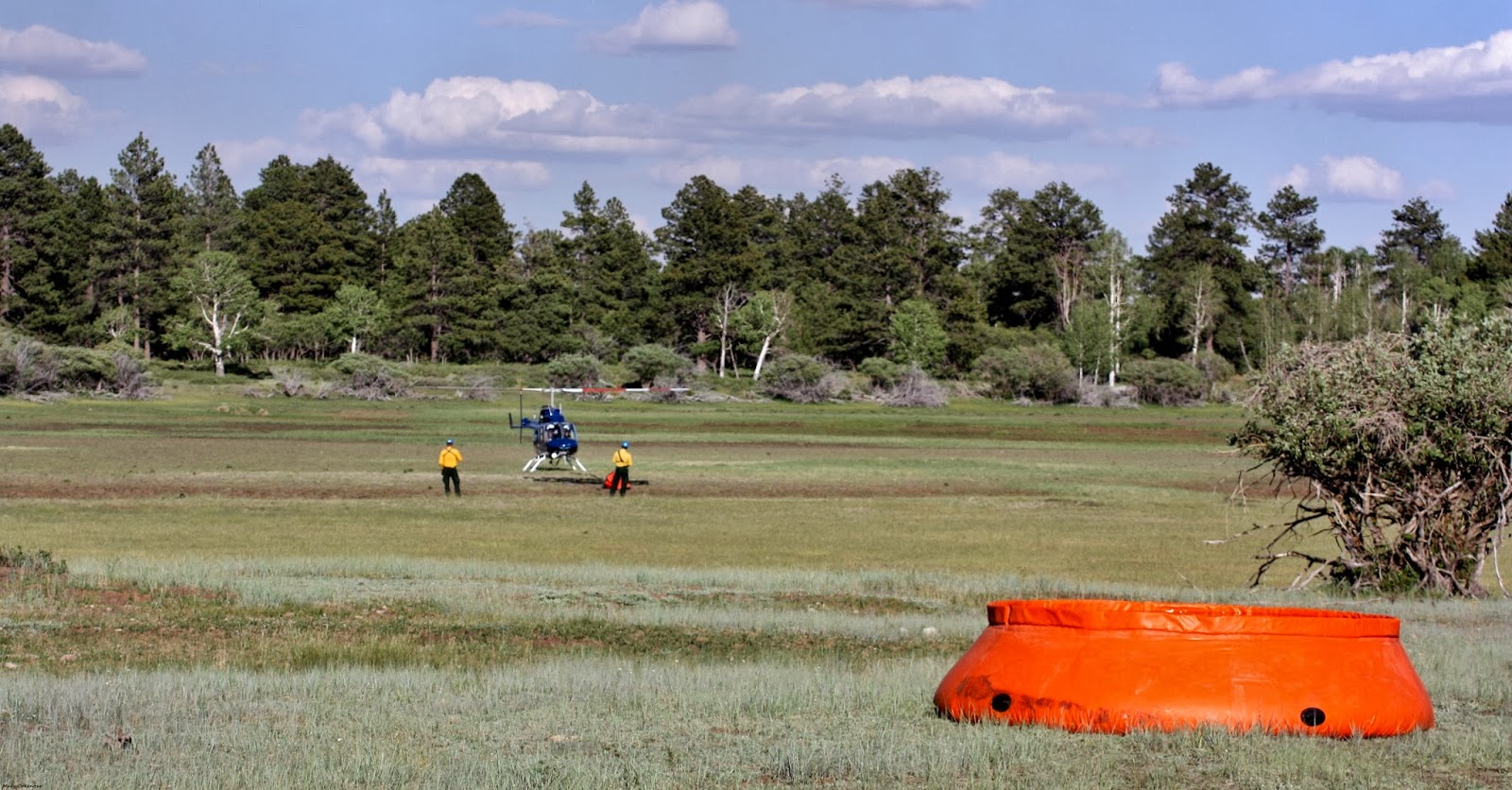 We finally came to a clearing which had forest service workers, a helicopter and the "helicopter buckets" which held water to spill out over forest fires.  We stopped to take photos, the workers waved, and, again, we were given no warnings about turning back the way we came, or to hurry out of the area.  It would be much later on that we would find out what exactly had occurred. 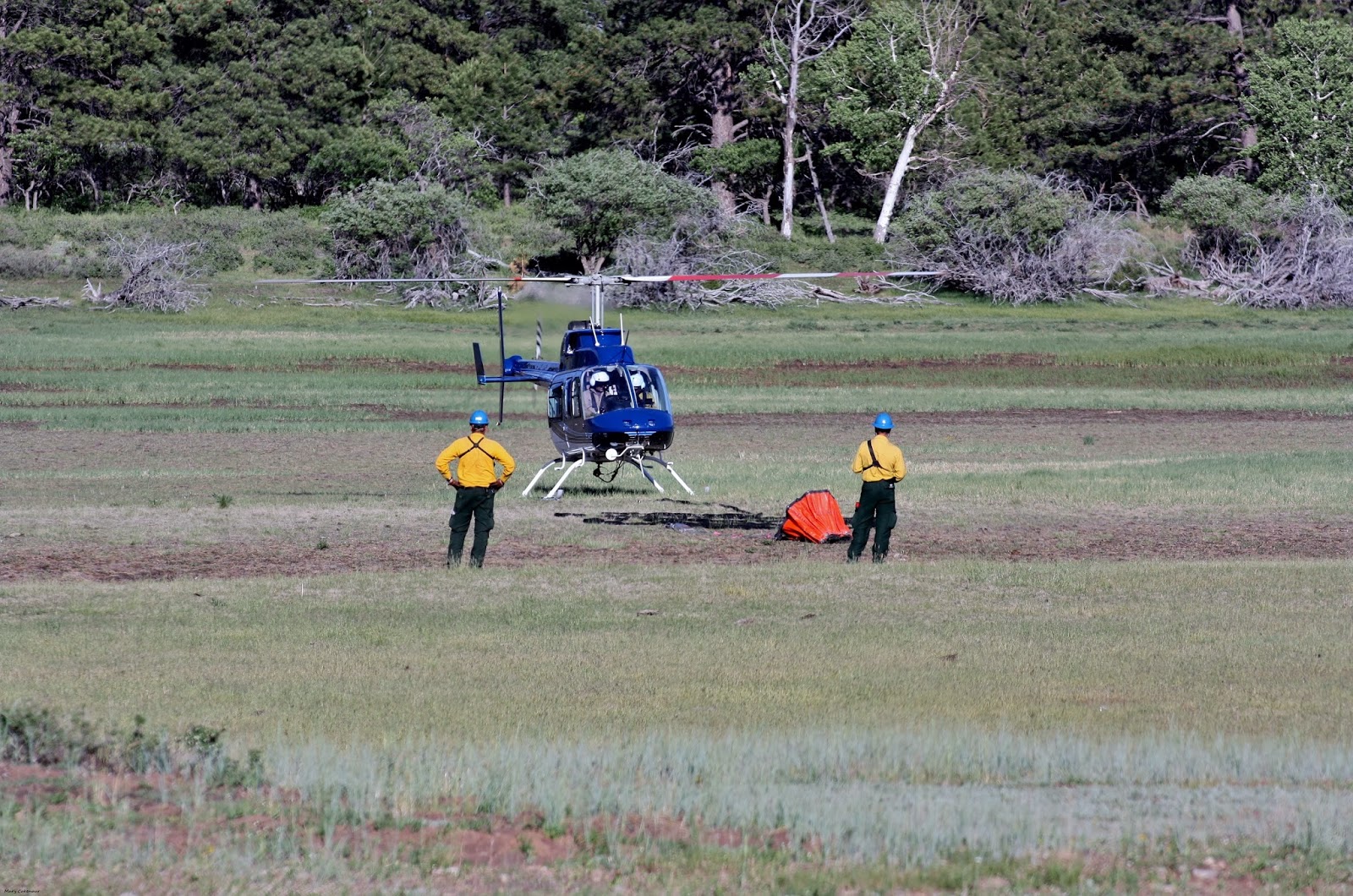 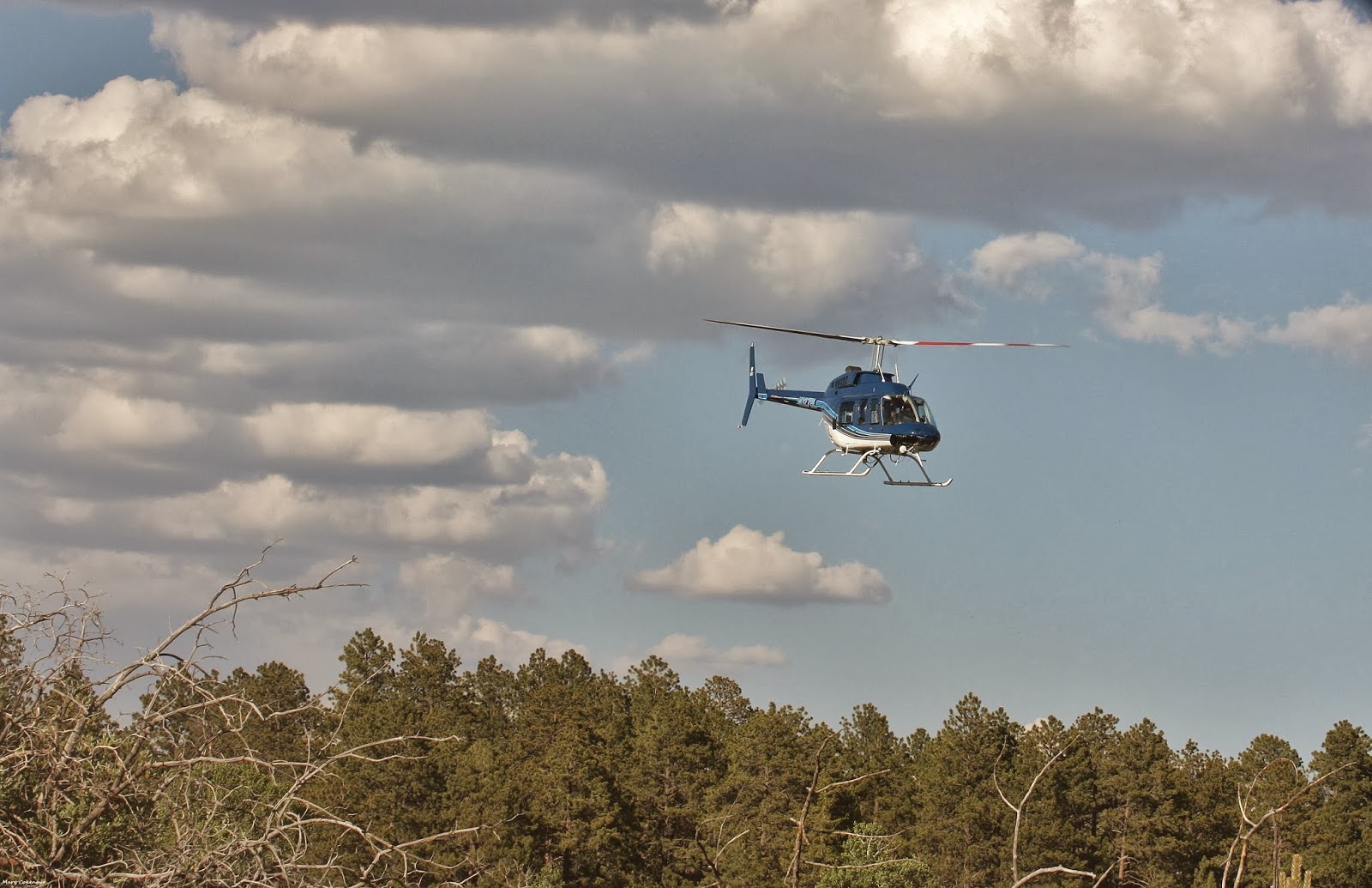 Here is the information about the Dark Canyon Wilderness fire we were able to obtain later on.

On the evening of June 13th, the Manti-La Sal National Forest, west of Monticello, received dry lightning on Elk Ridge; the Forest Service was working on suppressing several fires that were started with this lightning event. The Dark Canyon Wilderness fire, just south of Gooseberry Guard Station, was one of the larger fires and was fully contained on June 22, 2013, but not before engulfing and destroying 350 acres of forest plant life, mainly timber.  No human lives were lost, but the cost to animal and plant lives...?

Our area in Utah is experiencing drought conditions, so while Mother Nature was the cause of this fire; campers and hikers need to be aware of fire safety in this region.  Please be aware of one issue, when being told that "fires are not allowed in the forest at this time"; being offended is the most idiotic thing to feel.  You're not being told this just so your camping vacation can be ruined; you're being told this to avoid causing any fires that will destroy the forest, kill wild and plant life, and perhaps yourself and any other humans in the area.  It's basic common sense!!!

Not sure about fire safety in the forest, then here are two websites that you can access information from.  One happens to be Smokey the Bear's website, and he will not steer you wrong; it included videos you can watch with your children (if any).

It's not too early to plan your vacation to the Monticello area, and camping up in the Abajos; it's never too early to remember what Smokey the Bear always says, "Only you can prevent forest fires".

Mary Cokenour
Posted by Four Corners Foodie at 10:33 AM