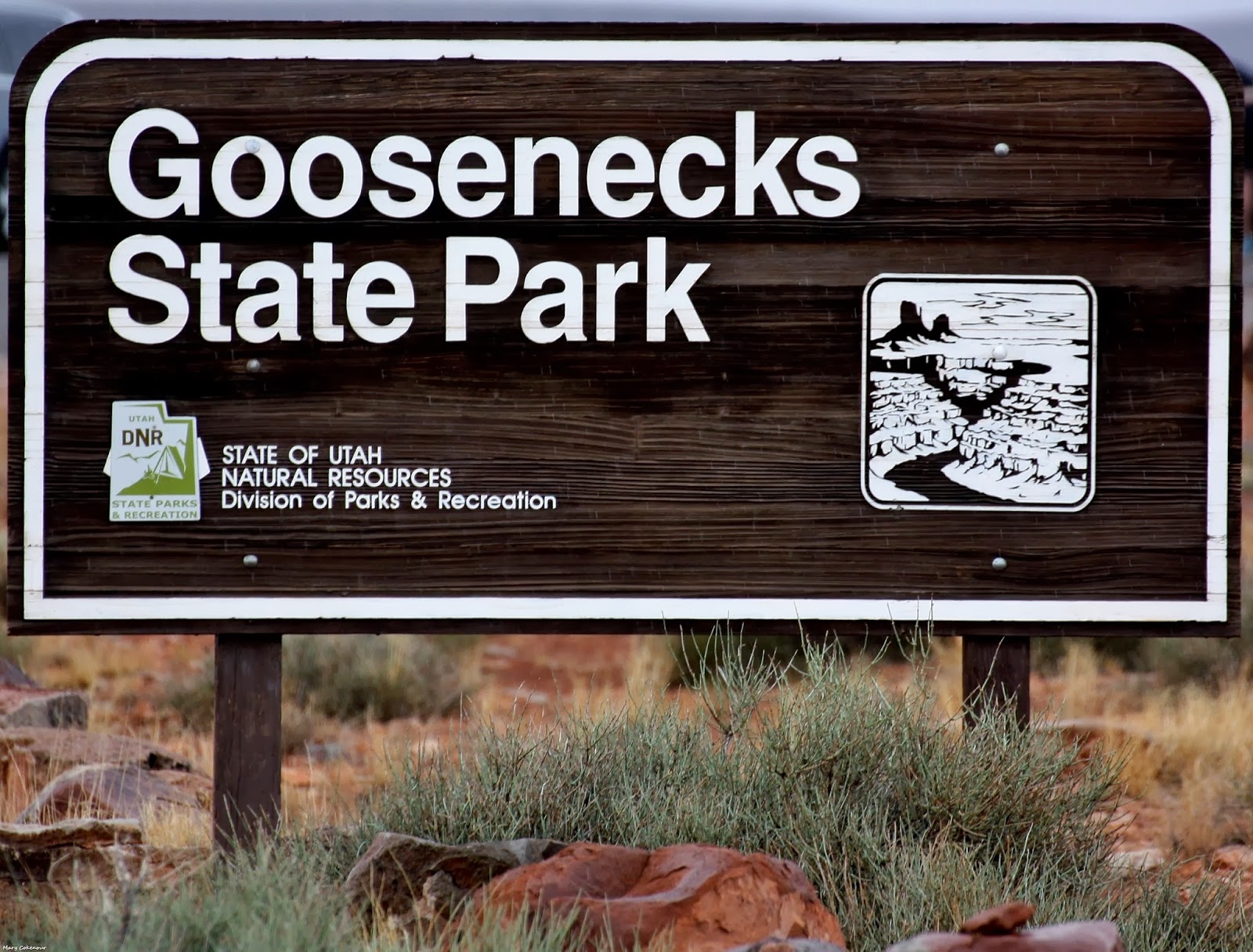 How you get to Goosenecks State Park is basically up to whether you did the Valley of the Gods tour which brought you out to Route 163; or if you stayed on Route 261, passed by the Valley and ended up at UT 316.  If you're on Route 163, make a right turn towards Mexican Hat, another right onto Route 261 and then the left onto UT 316; if you're on Route 261, just make that right turn.  The road is short and you'll arrive at a gravel parking lot; walk straight toward the fenced in overlook and get ready for your jaw to drop. 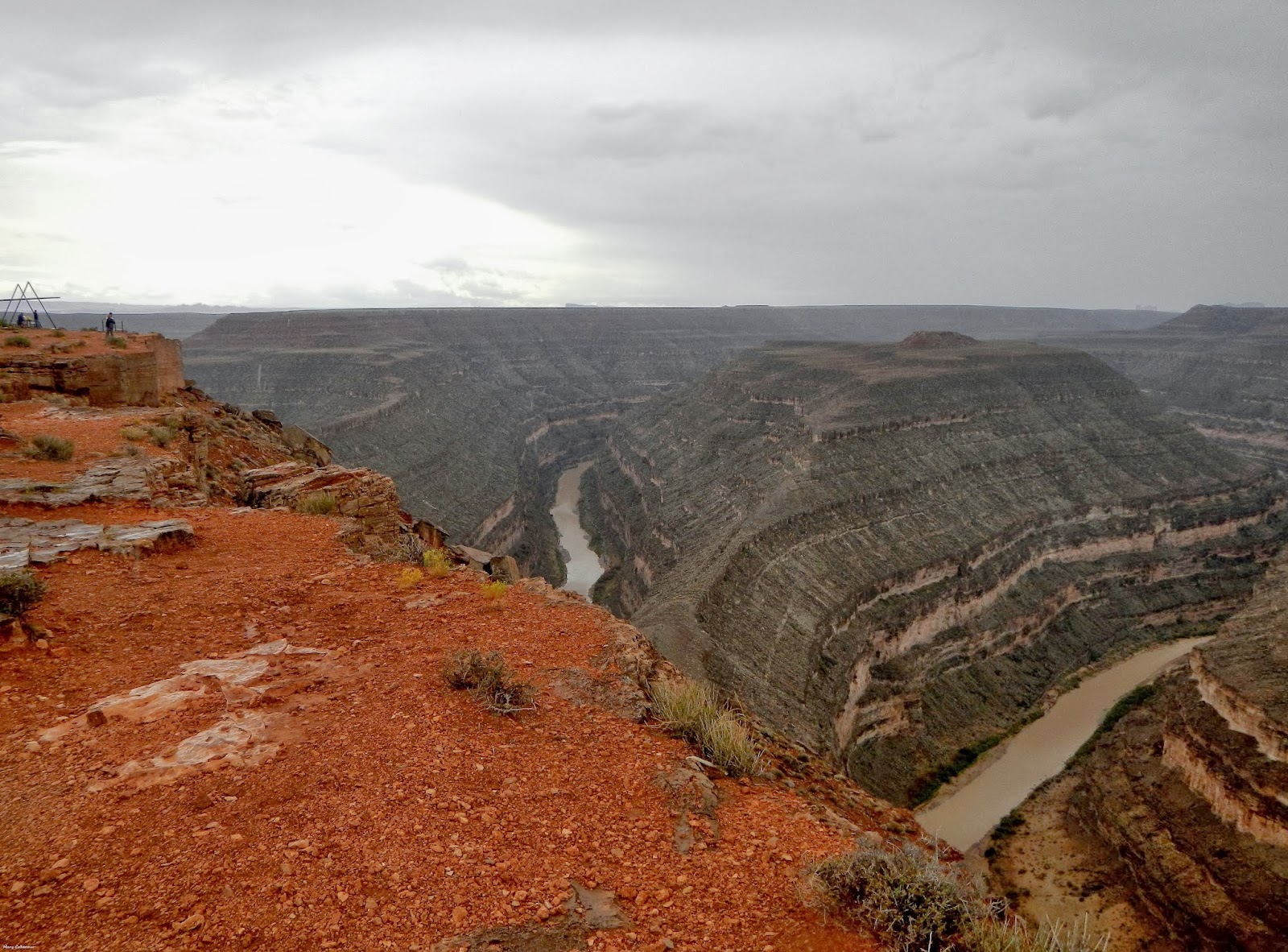 Over 300 million years, between upheavals in the earth, the wind, rain and the flow of the San Juan River, the Goosenecks formed; it is a drop of 1000 feet down below.  Walking along the ledge, it just keeps getting more and more amazing to view; be careful, there is no other fencing and that first step off the edge....... 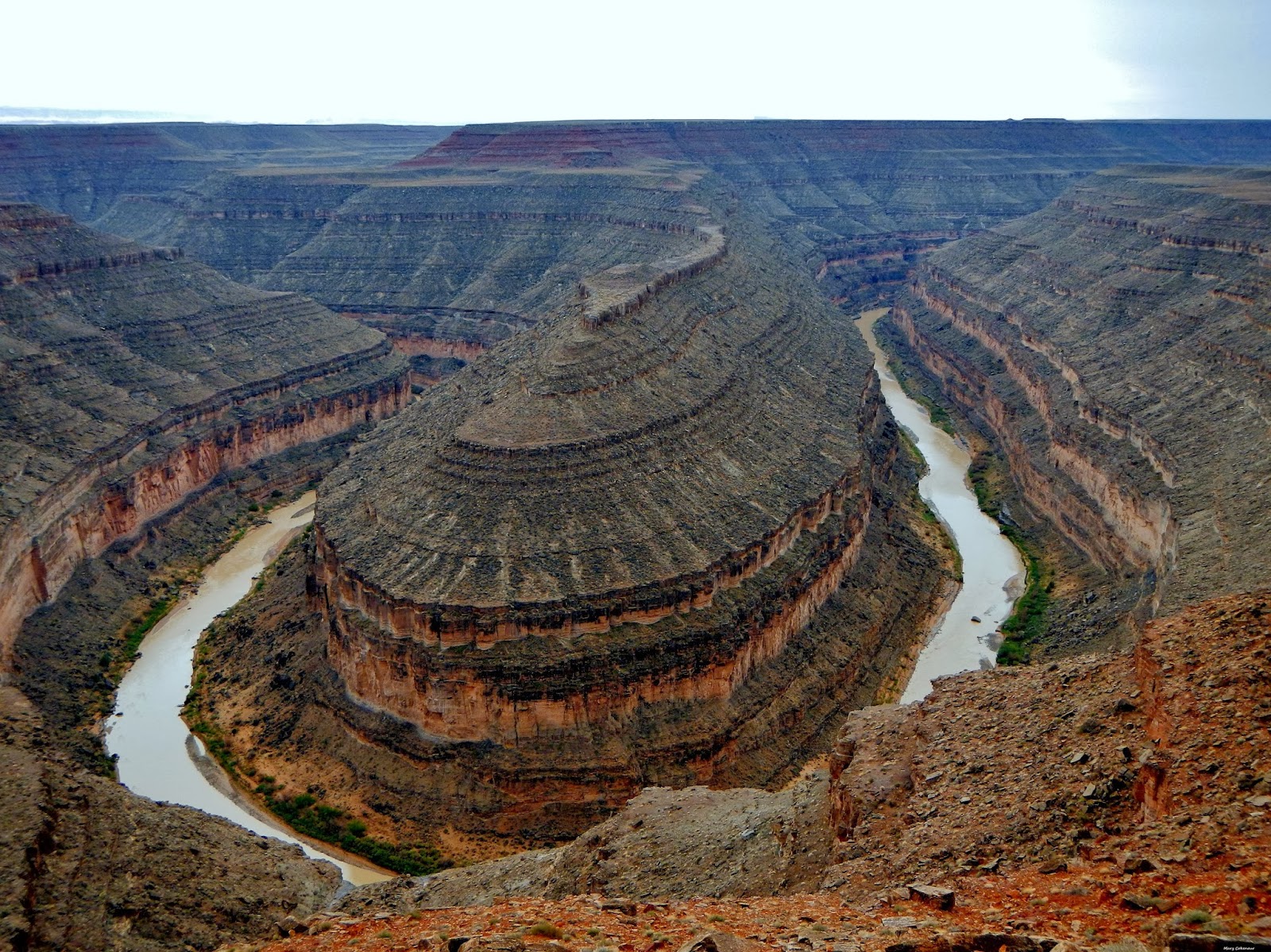 If you've visited Dead Horse Point State Park, you would have seen the single Gooseneck that had been formed by the Colorado River.  Goosenecks State Park has double goosenecks and you can follow the flow of the San Juan River; in sunlight, the stone walls seem to shimmer. 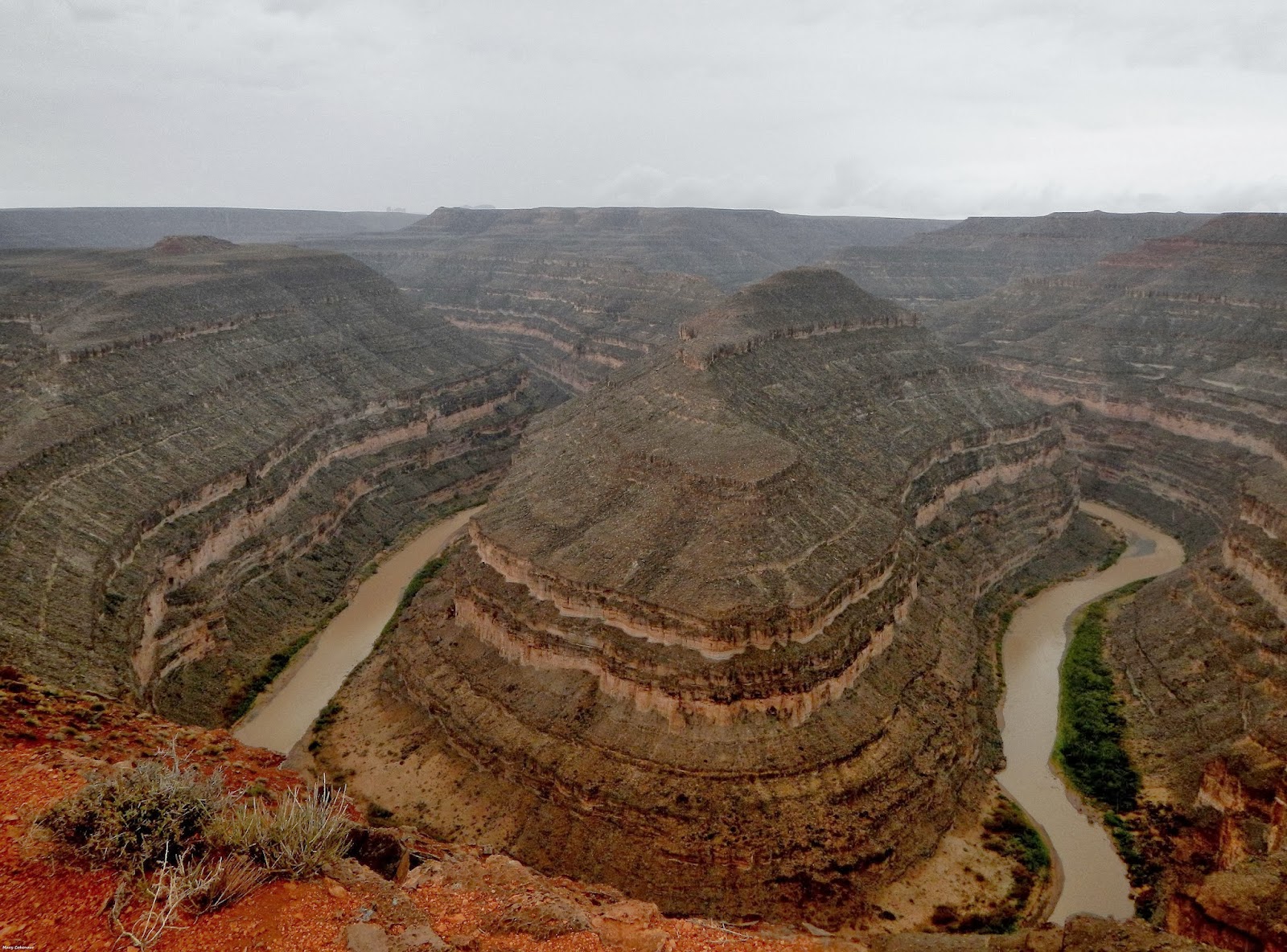 Camping is allowed in the area, but it is primitive and you'll need to bring your own supplies; the nearest town to shop in would be Mexican Hat.  There is also a trail northwest of the Park called the "Honaker Trail" named after Henry Honaker who supervised its construction.  Built in the 1890s, it was a supply route for gold prospectors, but the "gold rush" in the area didn't last very long.  The dirt trail is 2.5 miles of switchbacks taking you from the canyon rim to the San Juan River below; 4 wheel drive vehicles can make the trek, but it is more hiker friendly than vehicle friendly. 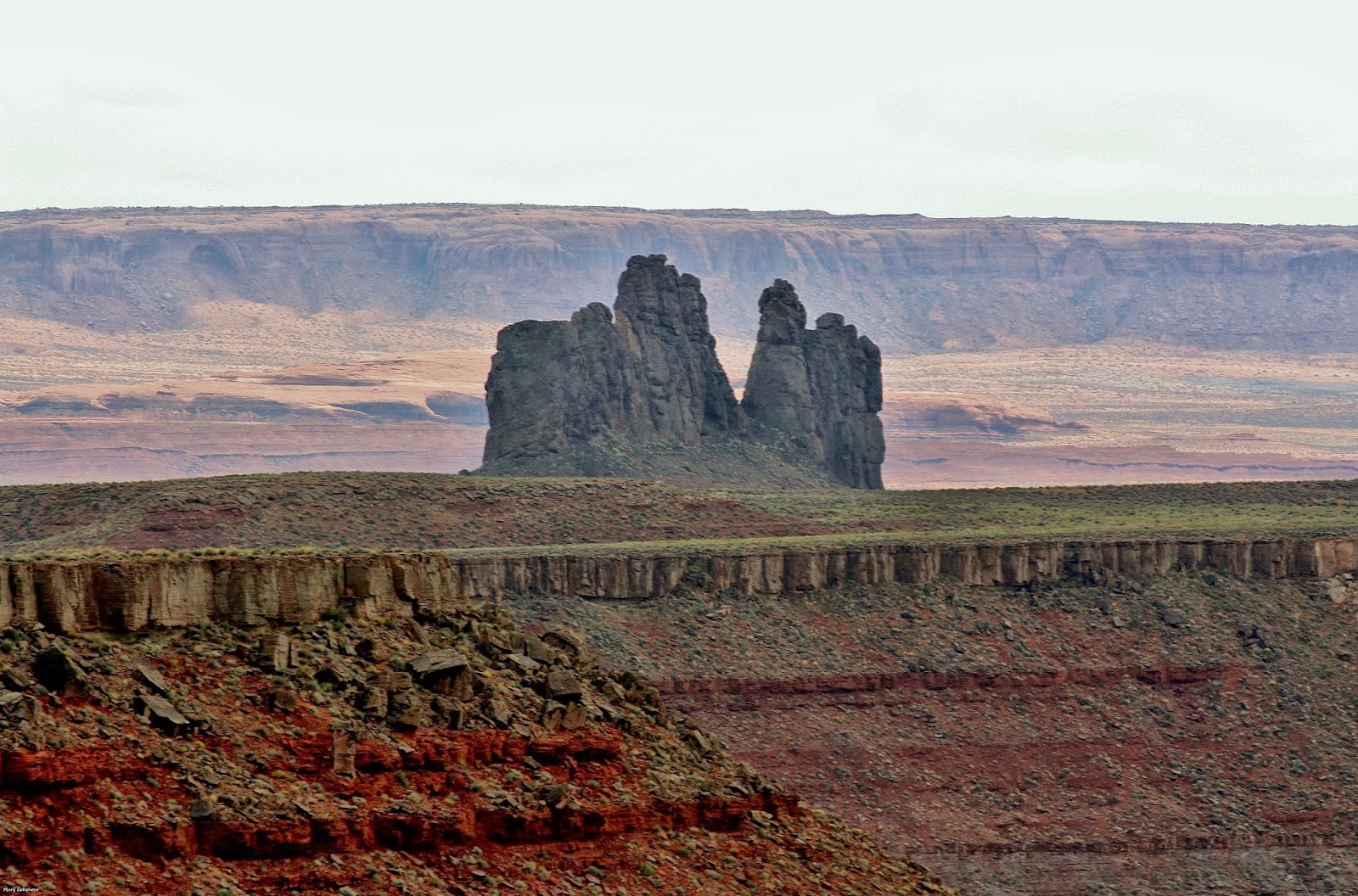 As you leave Goosenecks State Park, a formation will loom up in the distant right; this is the back end of Alhambra Rock.  As you continue onto Route 163, past Mexican Hat and towards Monument Valley, you'll get a better viewing of Alhambra Rock; there is a pull in area if you wish to take photos.


There is another amazing site as you approach the junction of routes 261 and 163; the stone walls ahead have a design woven through them. The Navajo call it "Mountain That is Coiled"; the design is used by weavers and called "Navajo Blanket".  It represents the giant bullsnake that lives inside; bad luck comes to those who trespass or do not treat the hills with proper respect.

I would be remiss by not posting this photo of my hubby, Roy; as you can see, the Goosenecks are an excellent background for photos; plus I love showing off my hubby. 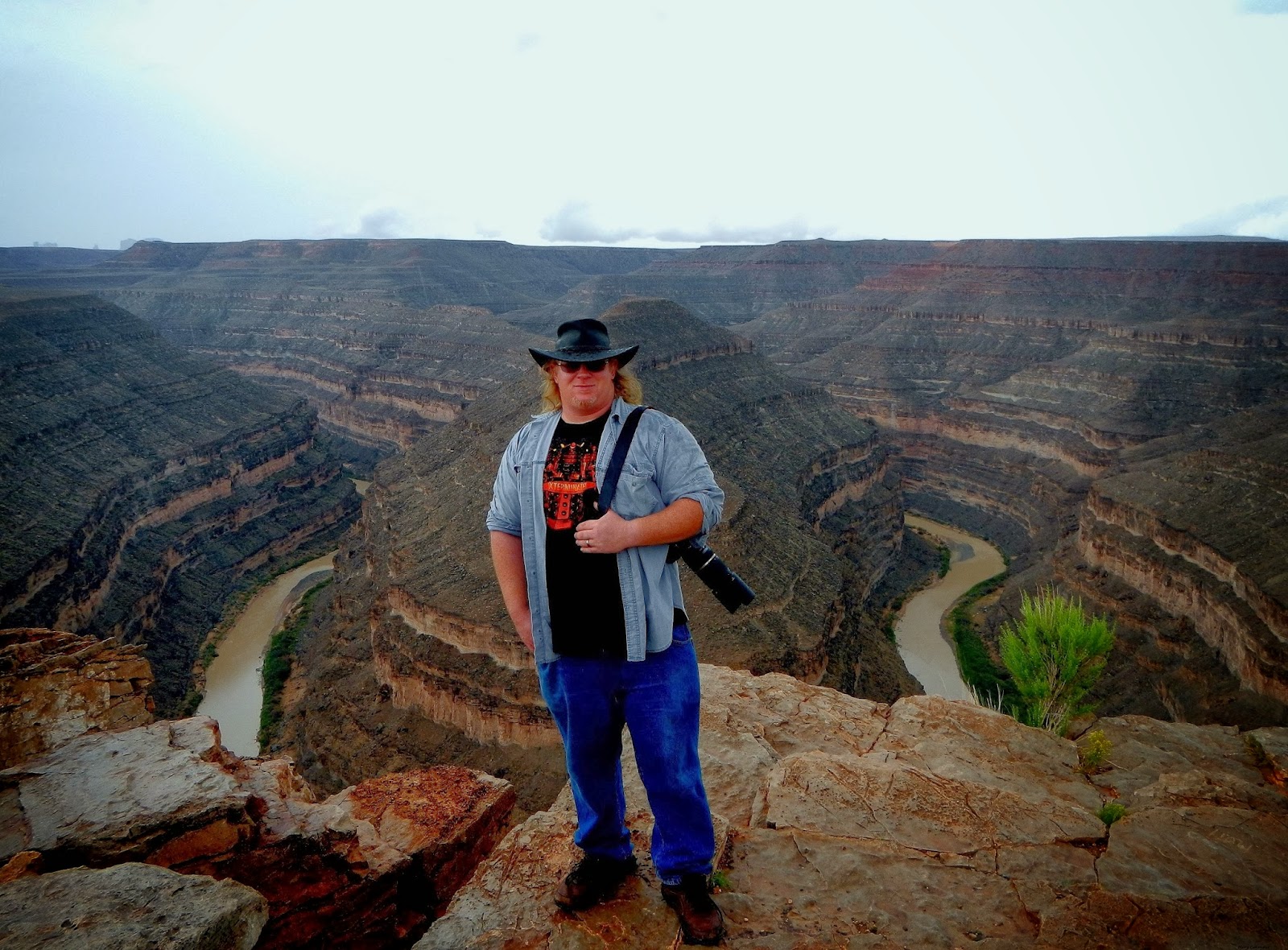 While the information about Goosenecks State Park is short, it is a sweet place to visit.  There are picnic tables, so think about bringing a meal and gaze out at this wondrous geologic marvel.