The Southern End of Route 191 in Utah. 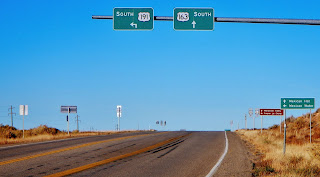 Normally traveling to Monument Valley, or even into the state of Arizona, means going south on Route 191 to Bluff and then continuing on Route 163.  So what happened to Route 191 you might ask; then again you might not even care.  Being curious adventurers, Roy and I decided to find out what the southern extension (built in 1981 - 1982) had to offer in sites; we had not traveled it before and there's a first time for everything. 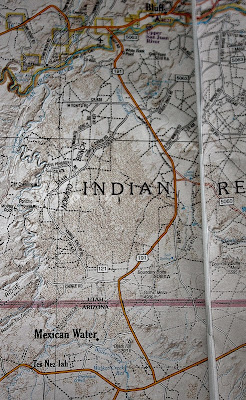 Route 191, depending on the map you use, is also known as "Bluff Road" or "Mexican Water Road"; Mexican Water is the name of the town you will come out in when you eventually reach Route 160 in Arizona.  Bluff itself is not part of the Navajo Nation, but you will soon cross over into it.  Now many of the roads are Country Roads (sign has a CR with a number), County Roads (sign has a SJC with a number), and you will still see signs for old "Indian Routes" (sign has Indian Route with a number); and then there are the roads with no signs at all.  Now after living in Lancaster, Pennsylvania for about 19 years, I understand how the Amish and Mennonite like their privacy; they're people who follow a different culture, they're not "things" for sightseeing.  The same goes for the Native Americans and the Reservations; it is homeland for their culture, and the people are not part of the tour unless you have been personally invited.  So, unless you know for certain that a road leads to a site open for public viewing; well, if in doubt, stay out. 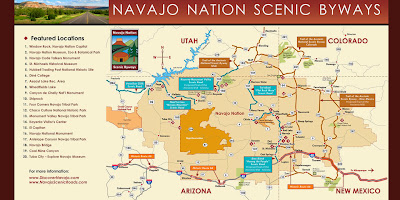 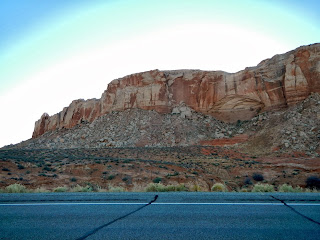 After turning onto Route 163, you'll sort of think, at first, this road looks boring; that thought won't last very long as you suddenly come up to sheer sandstone walls reaching up into the sky.  Hold onto your heads as they'll be turning from side to side to try and get all the sites in.  At one point you'll cross over the San Juan River and its sandy shore. 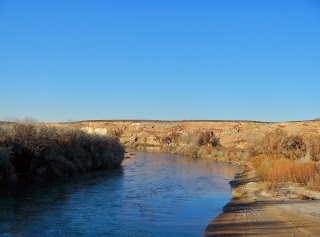 Now what I didn't know at the time was that this section of Route 191 runs parallel to Comb Ridge.  The indentations of the ridge (as seen from above and partial frontal view) mimics the structure of a comb, hence the name, and on our to-do list of course.  Anyway, the outward views from the road are pretty awesome to see.


Oh, before I forget, mile markers are pretty much non-existent on this stretch of roadway; so if you're one of those drivers who needs to know exactly where everything is, you're out of luck.  Just relax and drive, you'll find it eventually.  I can tell you that once you turn onto Route 191, you're about 26 and 1/2 miles from Route 160 in Arizona; yes, I said "about", relax and deal with it. 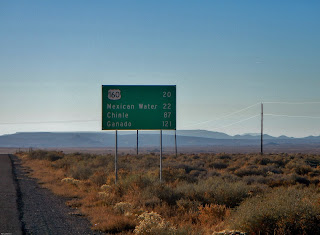 Once in a while you will see a road sign that will give you how many miles you're away from something.  This photo of one of those signs tells me that the scenic shots I took were about 4 and 1/2 miles from the turn-on to Route 191.  Does the mesa seen in one photo have a name?  No clue - no signs, no names listed on maps; basically not every formation has a name out here, since there are thousands.  Do you realize how large a book of maps would be if every rock formation was named and pointed out on a map!!??!!

Along the way I made Roy stop the SUV to get a photo of some adorable looking creatures - three burros.  Now I have seen many a light gray burro, but these were white and dark gray to black.  I was entranced with how adorable they looked, and Roy smiled because this simple pleasure was so exciting to me.  He named them, what else, The Three Amigos.


Now this last photo was of an intriguing formation that became more and more mysterious looking as you got closer.  Considering we were looking eastward and the sun was in full brightness; it caused an intense shadowing effect on the dark stone.  I looked on the internet for many an hour to try and identify it; from written geological reports I ascertained that this is more than likely "Boundary Butte".  I found photos of "Boundary Butte Mesa" which is further east of this formation, same type of rock, smaller in size and having an arch within in.  It was so named due to its proximity to the Utah-Arizona border, so once you see this formation, you know you're almost to Arizona.


Now we're at the Arizona border and this is where this post will end...for now.  As you travel along Route 191 to Route 160, and then pick it up again going southward to Canyon de Chelly, the landscape will resemble a miniaturized version of Monument Valley.  There's your tease...