As I mentioned in my review of the Bar D Chuckwagon experience, you have to travel along scenic Route 250 from Durango to reach it. However, my husband and I got there earlier than planned, so decided to do a little bit of exploring of Route 250. It is only five miles more before you reach Route 550 (around mile marker 36) which leads either back to Durango (12 miles), or up north through the Rocky Mountains towards Silverton. Continue onwards towards Quray, Red Hill Pass and eventually you'll end up in Grand Junction, but be prepared for many other scenic locations along the entire way. 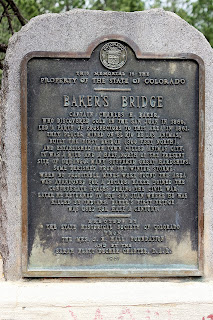 Along Route 250 we came across the most beautiful area imaginable, Baker's Bridge.  Captain Charles Baker lead an expedition of 15 men in the hopes of finding, and mining, gold.  The men camped down by the Animas River, during the winter of 1860 - 1861, at what became known as Animas City.  Durango itself had not been founded, named or settled yet.  The men endured many hardships; attacks by the Ute Indians, harsh winter conditions, and war...The Civil War.  The men who made it through the attacks and weather ended up in an area they named Baker's Park which later became known as Silverton.  However, the Civil War forced many to take up arms; those that lived returned, but the landmarks etched upon their maps had been destroyed (mainly trees cut down), and the gold was lost.  Legend says that it is still waiting up in the mountains to be claimed. 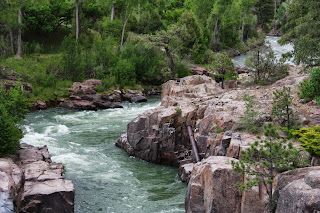 Baker's Bridge was built to give easier access over the Animas River; the original bridge was torn down and recreated with sturdy concrete.  The water flows quickly on the river, white caps topping the waves; the sound of it as enchanting as the song of a siren.  The entire area is calm, serene and majestic; whether standing along the fenced wall, or sitting upon the rocks down below, you are at peace. 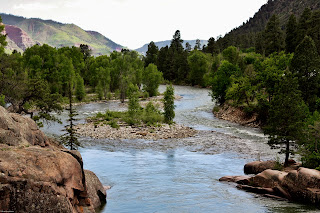 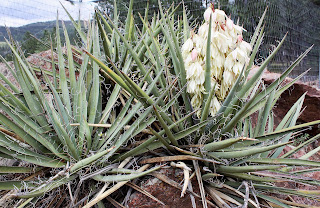 While the surrounding area is forest, plant life grows from between the rocks and boulders along the Animas River.  Even the stones along the roadway flourish with life; the Yucca, a desert plant, shows off its bell like blooms.

If you find yourself around the Durango area, take the ride along Route 250 and make sure to stop at Baker's Bridge; enjoy the simplicity of serenity.

Posted by Mary Cokenour at 6:01 PM