An Afternoon in Bluff.

Lately, Roy and I have been spending leisurely afternoons down in the Bluff, Utah, are; then meeting up with our friend, Amy, for dinner.  Lets say we are on a quest, a quest to see all the sites listed in the "Around Bluff" pamphlet given out at Bluff Fort Museum and Visitors Center.  A map will help you with today's post, especially since I filled in added details.

Two of the famous attractions in Bluff are the Navajo Twins and Sunbonnet formations located at the Twin Rocks Café and Trading Post, but we didn't stop here this time.  Instead, we drove past and onto County Road 723 which took us to Calf Canyon, and another formation called The Locomotive.  To me, The Locomotive seems to be more of a focal point of the Bluff area than the Navajo Twins. 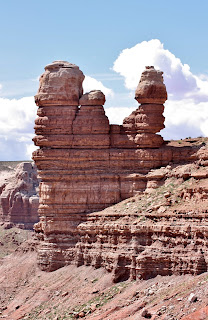 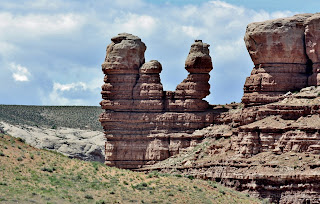 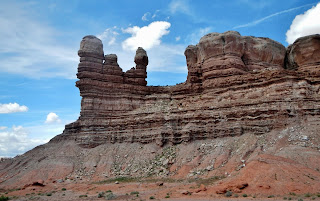 Calf Canyon is a peaceful area to hike around in; we found a large stone slab with various rocks placed upon it.  Looking from above, we could make out the form of a spiral; someone's idea of an altar or sacred space? 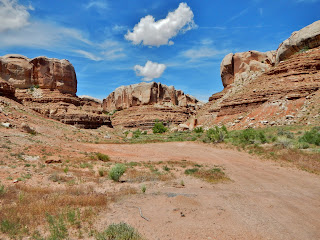 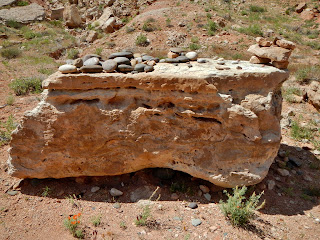 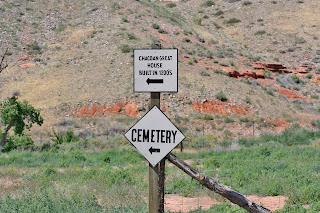 A long while back, I had seen a photo in our local paper, The San Juan Record, of The Locomotive as viewed from the cemetery.   Going back towards Twin Rocks Café, we made a right turn before getting to it and ended up on Red Rock Road (aka Cemetery Road).  We did see a sign about the cemetery, and a ruin site, but this is where it gets a bit confusing.  We saw a road that curved upward, but it looked like it was going to a Native style home; but continuing straight on brought us to "Residents Only" streets.  Out came the GPS and to our surprise, that upward curved road was the one we were supposed to be on.  Yeppers, we drove right on past that Native style home, and came upon the Great House/Great Kiva kiosk. 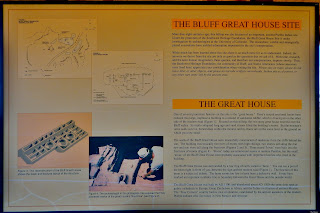 Built around 1100 A.D., the Great House is an example of Chacoan culture; several rooms in which some had two stories.  The Great House was reburied to keep it preserved.  While the Great Kiva is partially buried for preservation, there is a section open to the public for exploration. 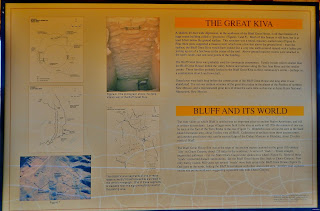 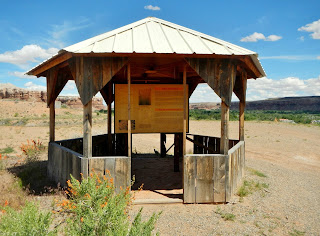 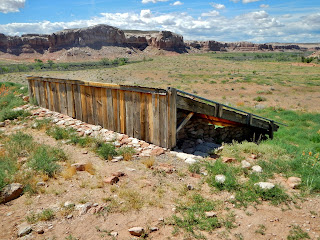 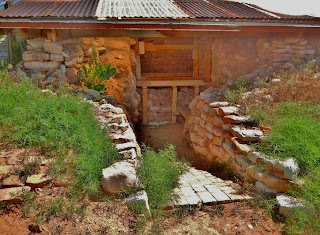 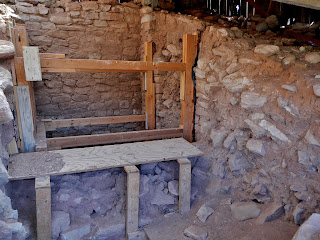 At the end of this road is the Bluff Cemetery; small, quaint and the resting place for the first Mormon settlers in San Juan County, as well as their descendants. 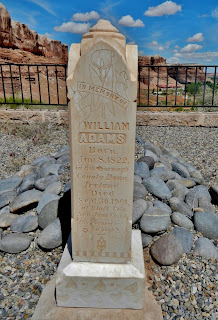 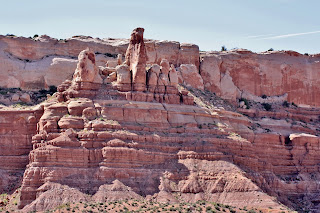 With no actual plan in mind, we ended up on Route 191 again heading out of town in the direction of Mexican Hat. We did not get very far at all, but saw a sign for "Bluff Transfer Station" and said, "Oh what the heck!".  This 4-wheel drive road is 2.4 miles from Bluff Fort, and the "transfer station" is basically the dump.  It was a bumpy, yet relaxing drive out into the desert when at the 1.3 mile mark I yelled out to Roy, "Hoodoos!"  This trail ends at the 1.5 mile mark and we saw a "hoodoo spire".  Now the interesting part of this is that these hoodoos are not the hoodoos that are mentioned in the "Around Bluff" pamphlet.  We're going to try and find those within the next week. 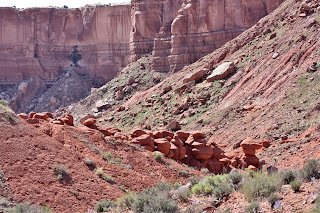 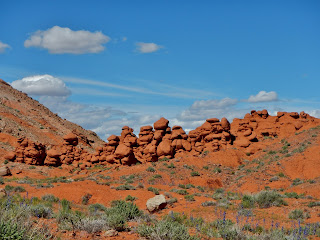 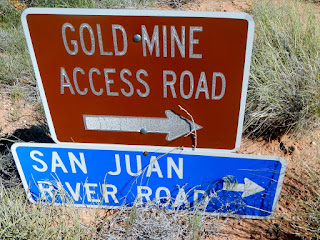 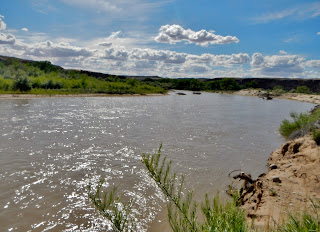 Still time before meeting Amy for dinner; it was her birthday by the way, and we were taking her to Cottonwood Steakhouse.  So a detour onto County Road 2691, or the road to the Bluff Airport, called to us.  We rode all the way down to the hangar and tarmac with a mutual thought of, "Well now, that was anti-climatic."  That is until I looked outside my window and there, close to the ground, were two signs, "Gold Mine Access Road" and "San Juan River Road"...jackpot!  Now this ended up being, on one hand, disappointing because we could not get near the gold mine to see what it was about.  However, we did get all the way down to the river and that was glorious!  It's quiet and the sound of the flowing water is so soothing.  There was evidence of camping down there, and we figured that, in the future, this would be a perfect place to have a picnic.  One strange occurrence though was seeing all the smiling faces staring at us from across the river.  Looks like someone, or maybe a few, decided to shoot at the red rock walls across the river, and create their own version of "rock art". 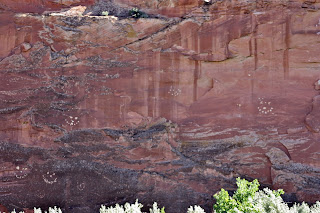 ﻿
On the way back to Route 191, there was a small plane at the airport, and the pilot waved to us.  I had Roy stop, so I could take photos of flowering plants; the plane flew overhead and we waved.  Don't know if the pilot saw us, but it was a nice ending to this adventure.  We met our friend at Cottonwood Steakhouse, had a great meal as usual; it was a perfect afternoon in Bluff.