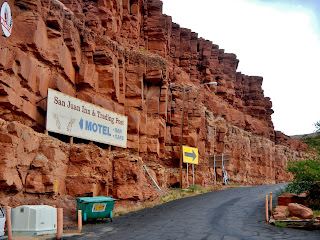 Mexican Hat, named after the famed sombrero formation, has a history rich in oil, gold prospecting, and uranium/vanadium mining.  In 1882, this small town was first named “Goodridge”, after E.L. Goodridge who came to the area in hopes of striking it rich on gold.  Like the Beverly Hillbillies, up from the ground came a bubbling crude; oil that is.  1906 to 1910, a man named Neville built and ran a trading post north of the San Juan River; but it was Jim Hunt who took it over and built the inn.

Over the San Juan River, the bridges that have come and gone have their own colorful history.  The original suspension bridge burned down and a second was built; wooden planking held many a horse drawn wagon, motorized vehicles, two legged to four legged walkers.


Update, July 6, 2016: In the book, "Looking Back Around the Hat,  A History of Mexican Hat"
by Doris Valle, there is mention of Emery Langdon (E.L.) Goodridge rebuilding the bridge as he was founding Mexican Hat (1882-1883).  (see side photo)
Thanks to my friend Amy for digging around archives and finding this little gem. 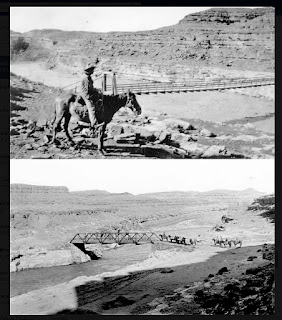 However, prior to Goodridge's arrival in 1882, another bridge was there; the river could rise a good 40 plus feet, so it was not unusual for a bridge to wash away, and another built to replace it.  John Wetherill (top photo), and Charles Spencer with his pack team (bottom photo) were photographed crossing the bridge over San Juan River.

Photos Courtesy of Harvey Leake (a descendant of the Wetherills).

Source for Sheep Photo: "River Flowing from the Sunrise: An Environmental History of the Lower San Juan"
by James M. Aton
http://digitalcommons.usu.edu/cgi/viewcontent.cgi?article=1127&context=usupress_pubs

During the 1940s to 1952 (around the time the San Juan Inn was built), this small, narrow suspension bridge across the San Juan River could not support large trucks. The ore, hauled from mines in Cane Valley and central Monument Valley, would be transferred to smaller trucks, transported across, and then transferred back to five-ton trucks which brought the ore to a stockpiling area about a mile north of Mexican Hat.  In 1952, construction began on an all steel and concrete “arch” bridge (completed in 1953) which would support the full weight of the larger ore hauling trucks.


This story comes from the father of Amy Watkins Kensley, teacher at the Monument Valley Elementary School:


In 1953, the driver of a small truck hauling a bobcat tractor (as large as a D6 John Deere tractor) chose the wrong bridge to travel over.  The full weight of both vehicles caused the planking to give way about halfway across; it all fell into the San Juan River, but, surprisingly, the driver was not injured.  While being repaired, the work crew placed a wooden panel over the broken section; the bridge was closed down to all traffic.  One day, a man asked if he could ride his horse over the suspension bridge, but was told no due to safety issues.  However, the next morning, the work crew came upon the man attempting to ride his horse over the bridge anyway.  It was very apparent that the horse did not want to go (horses being smarter than humans at times); however, they both made it across safely. 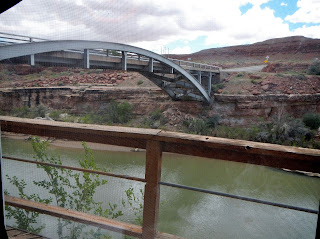 In the 1970s, the suspension bridge had become obsolete and was finally dismantled which brings me to the Olde Bridge Grille (formerly Old Bridge Grill Café and renamed in 2007).  Well, not on this post; you'll have to go over to my food blog for the write up, and photos, of the food.  Click HERE


UPDATE:  Spoke with geologist, river runner and Bluff resident, Gene Stevenson, on June 10, 2015, who was able to confirm that the old suspension bridge was not dismantled, but actually fell apart and down into the San Juan River in 1975.

Just in case anyone wants to know where I obtained my information about the Mexican Hat Bridges...

4 - Verbal history related to me by Amy Watkins Kensley's father.

5 - Photograph and verbal history related to me by Fred Blackburn (co-author of "Cowboys and Cave Dwellers" (1997)). 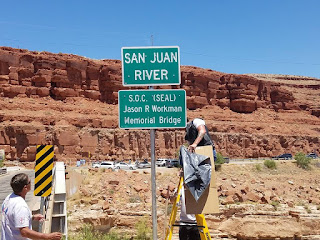 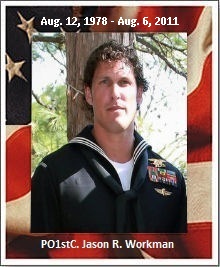 Photo Courtesy of americasbrave.last-memories.com
Posted by Mary Cokenour at 12:28 PM