Traveling to and from the Bluff area (remember, we're trying to find all the sites listed in the "Around Bluff" pamphlet), we often see a road going out to the beyond and wonder, "Where does it go?"  So it came to be one Sunday, on the way to finding 16 (or 17) Room House (I will be writing about it), that we decided to explore one of these roads outside of Blanding.

Shearing Pen Road (CR 210) is only about four miles before it ends at an overlook of Corral Canyon.  It's a beautiful area, and sitting on the slickrock ledges, having lunch, made the experience even that much better.  Oh, I should tell you how to find it; 5.8 miles from the Blanding Visitors Center, travel south on Route 191 till you see, on the left, a dirt road winding up a hill.  Every time we have passed by, we saw a welcoming committee at the entrance, so you may look for them as well.
At 6/10s of a mile, the road splits, Shearing Pen continues straight on; however the road to the left eventually loops back to CR 210 and is named "Posey S (Posey's ?) Last Shot".  Now it seems that Roy and I are traveling over history backwards; first we went to Posey's Trail Road (CR 240) where Posey tried to escape from the sheriff, but was killed.  Now we've found the place that lead to the chase, and the story is detailed in the book, "Posey - The Last Indian War" by Dr. Steve Lacy and Pearl Baker (pages 134 - 139).  The gist of it was that Posey, a Paiute chief, was getting his band together; the sheriff and his posse were riding to Corral Canyon to waylay them when a shot rang out.  A blue-roan horse, named Old Blue, was killed and while no one had actually been seen doing the shooting, Posey was accused and the chase was on.

The end of CR 210 had evidence of camping, and like I mentioned before, it's a beautiful spot for having a simple picnic.  We did see an ATV trail below, we could see where it ended, but not where it started as it wound around a small hill.  Where we sat, we could also see traffic as it moved along Route 191; the tops of 18 wheelers that is. 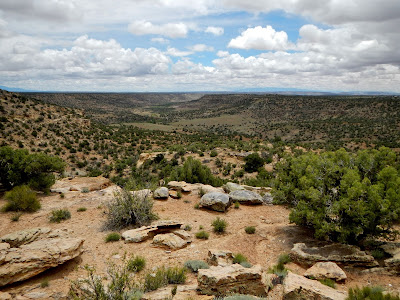 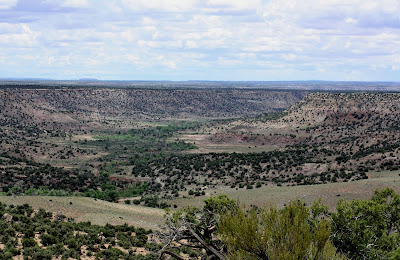 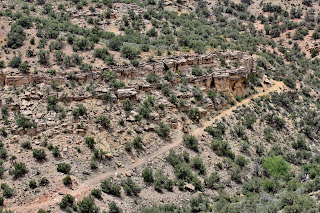 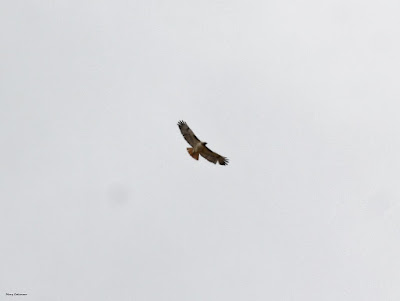 The quiet was divine, only broken by the call of a hawk to its mate; I was able to get a photo of one of them in flight.


A short, but very serene drive down a road with Native vs. White Man history; you can take the history, we'll stick with the serenity.

Posted by Mary Cokenour at 3:09 PM