Winter in the Desert.

Surprise!!! Winter does come to the desert regions of the Southwestern United States; sometimes the snow stays for days on end; sometimes it disappears within hours. As I stated in my post, "Welcome to the Desert", she is an unpredictable mistress, and demands respect!

On January 3rd, we took a drive between Monticello and Monument Valley along Routes 191 and 163; not only was there snow, but the clouds had descended and created mystical wintery landscapes.

Traveling south on Route 191, the Abajo Mountains were a maze of sunbeams and shadows.  Normally, sitting under the watchful eyes of the mountains, Monticello gets hit with more snow than the areas to the south.  Not this time though, and from Blanding to Bluff, we traveled through dense cloud cover.

As we drove closer to Comb Ridge (this is where Route 191 veers off and Route 163 takes over), the cloud cover eased a bit, but the snow certainly didn't. 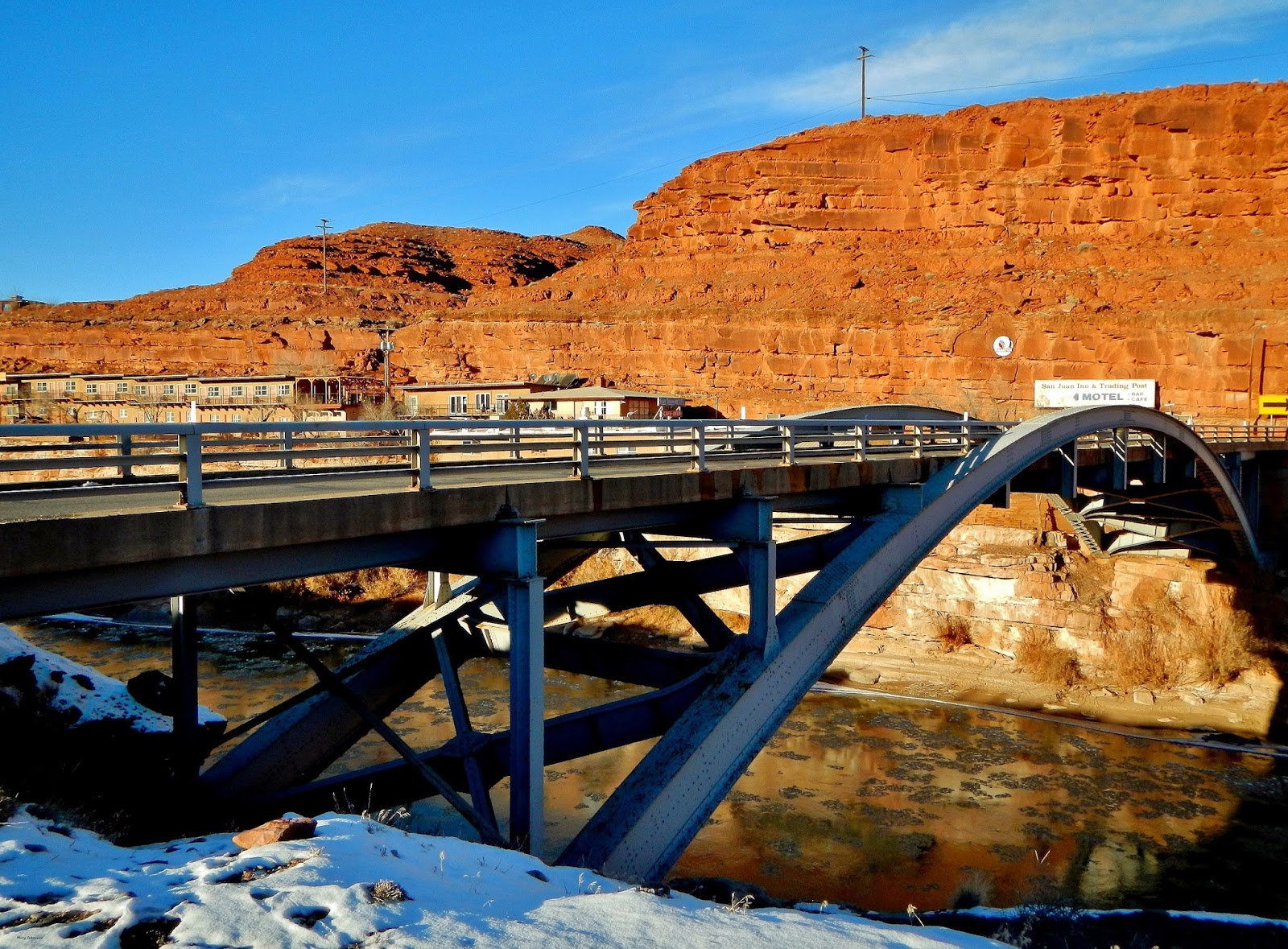 Surprisingly, when we reached the Mexican Hat area, there was not as much snow evident and the cloud cover has dissipated.  The San Juan River was not fully iced over, but you could see small pieces of ice flowing along. 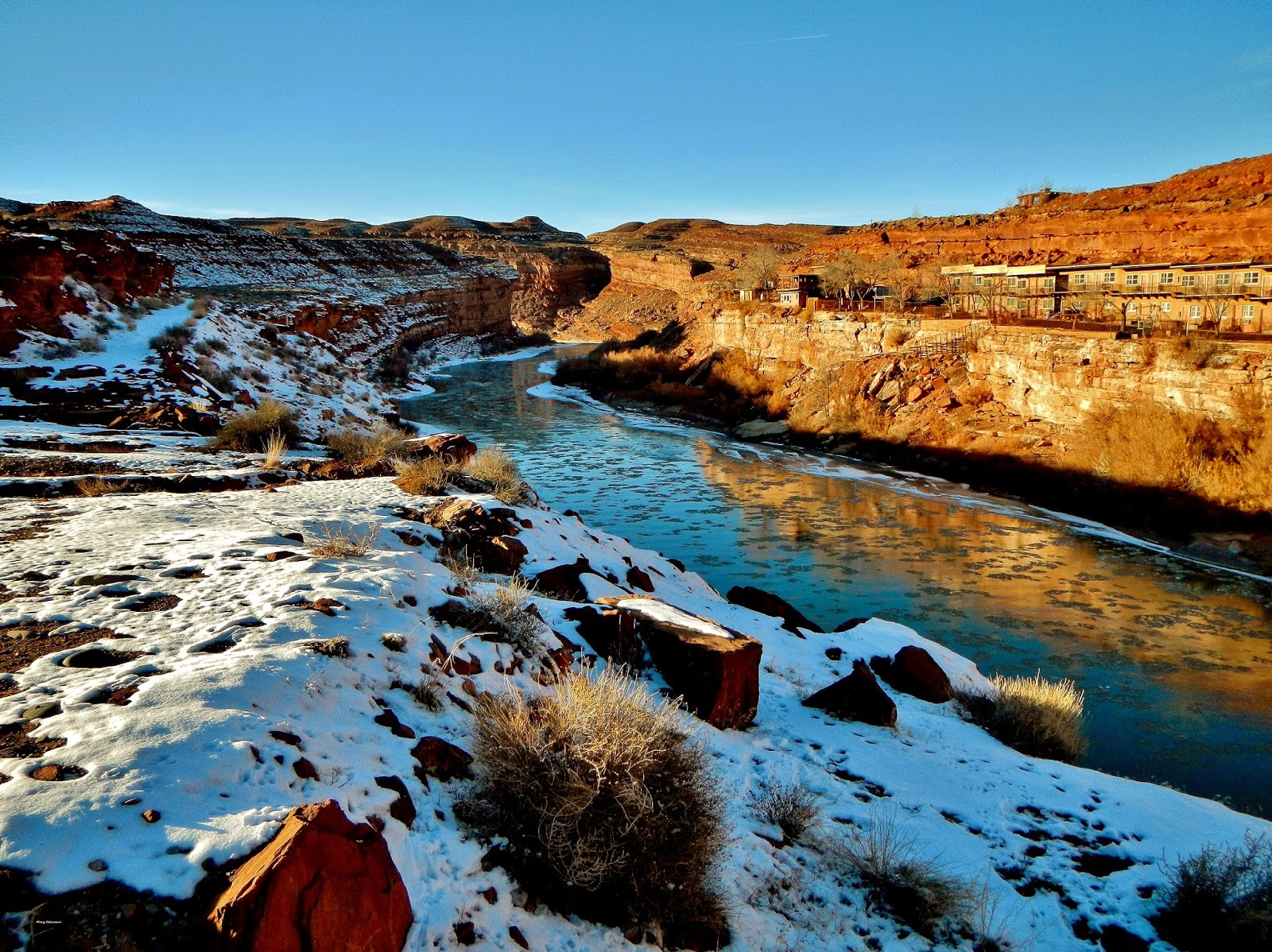 Valley of the Gods was magical; the formations seeming to float amongst the clouds.  Usually Monument Valley can be seen as soon as you cross over the San Juan River bridge, but not today; familiar landmarks had simply disappeared!

Monument Valley, where had it gone? Formations slipped in and out of view; Sleeping Bear being watched over by Setting Hen; suddenly it was swallowed up by clouds. We spent several hours at a friend's home and watched the sun make short appearances, each time the clouds allowing the grand formations to show more and more of themselves. By three in the afternoon, the classic forms of the two Mittens and Merrick Butte were once again standing proud. 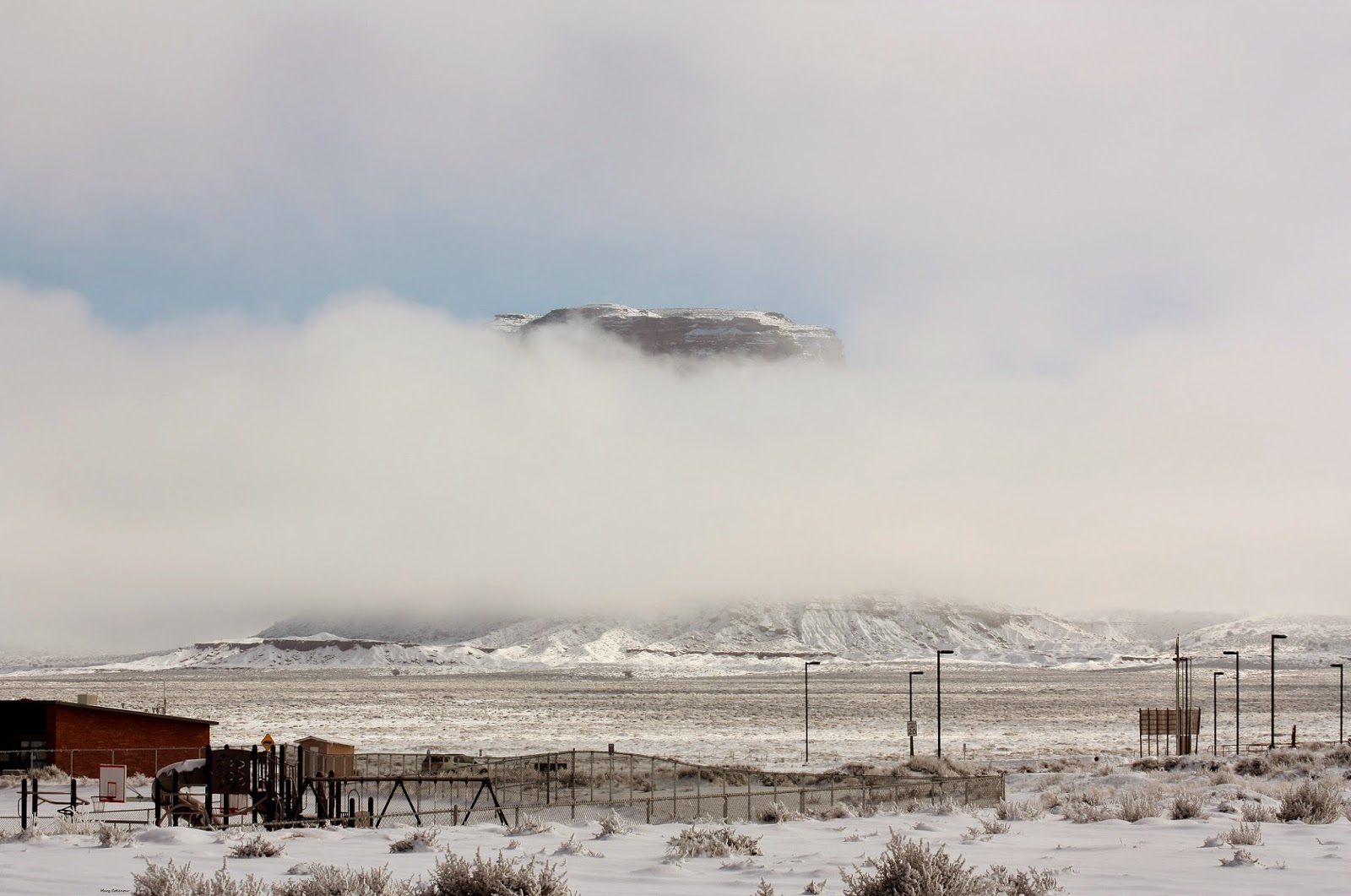 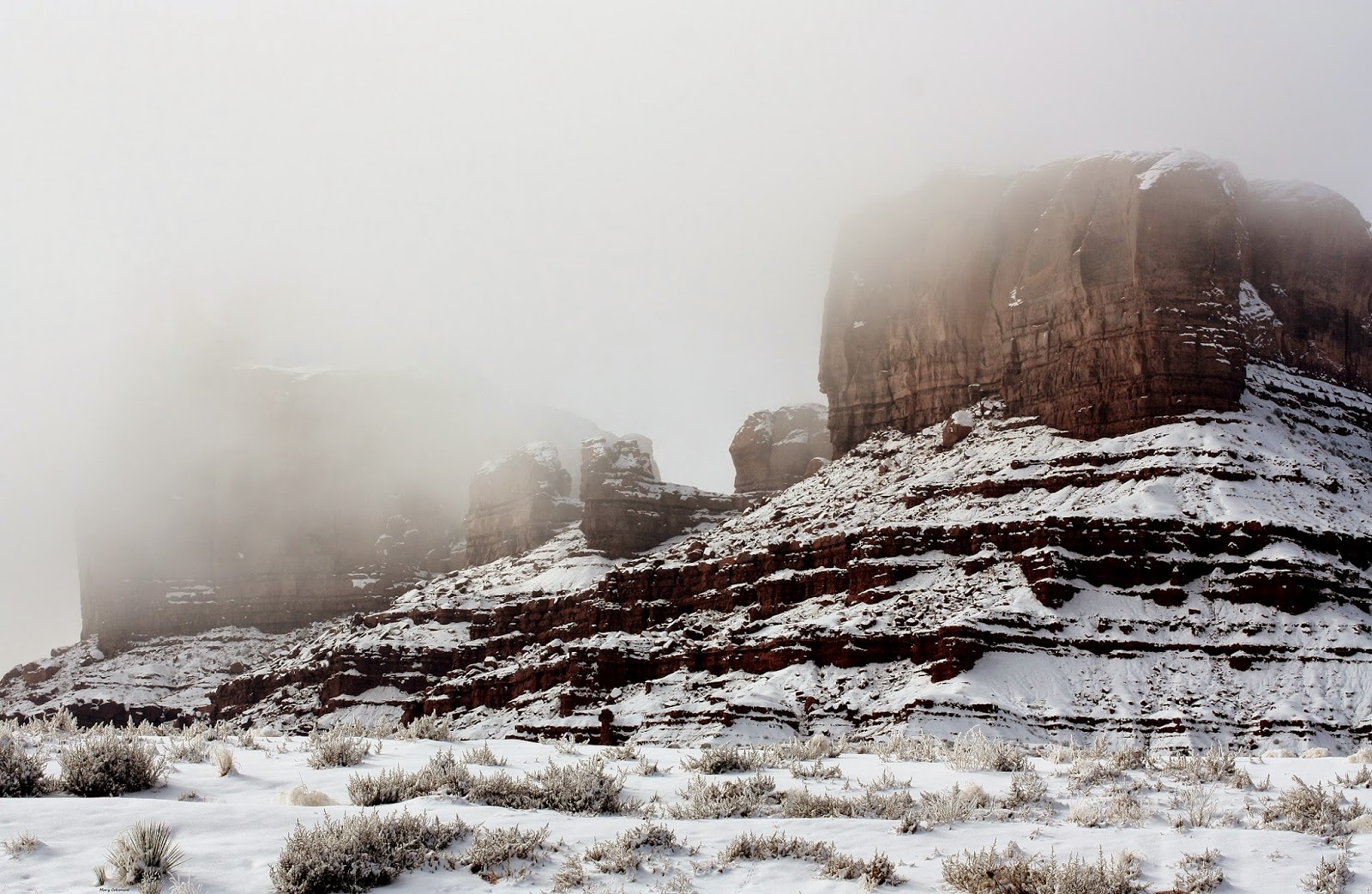 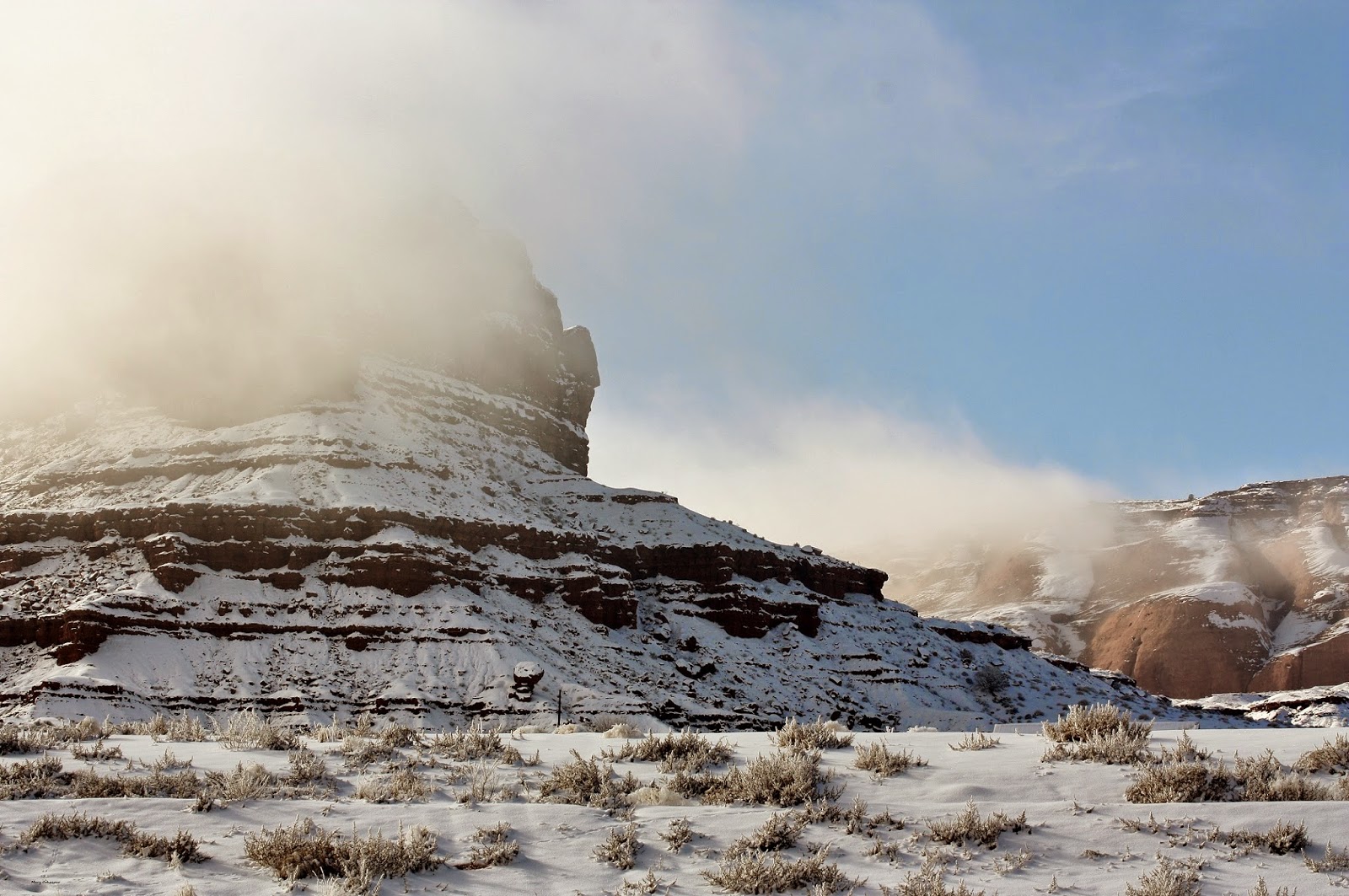 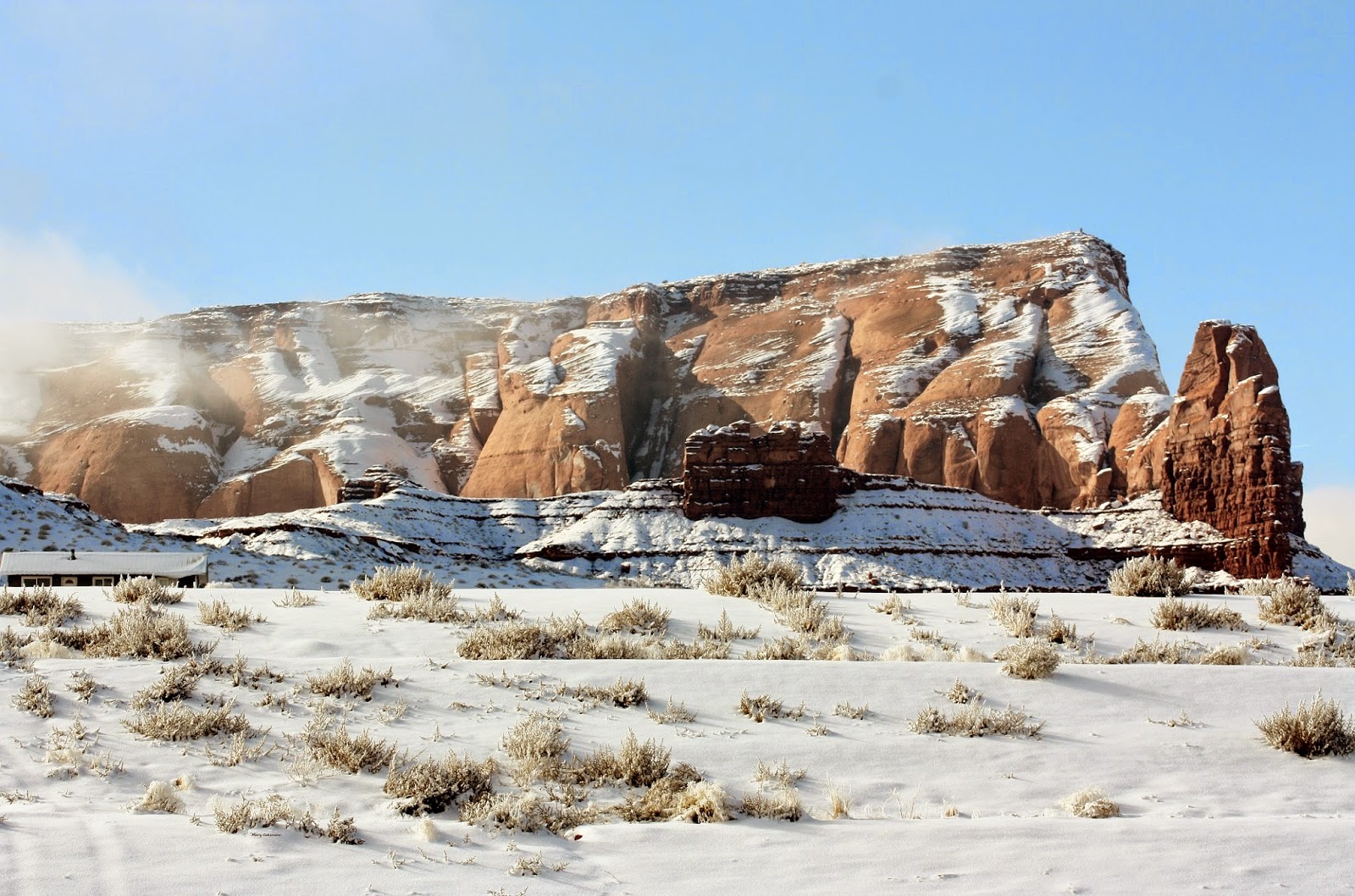 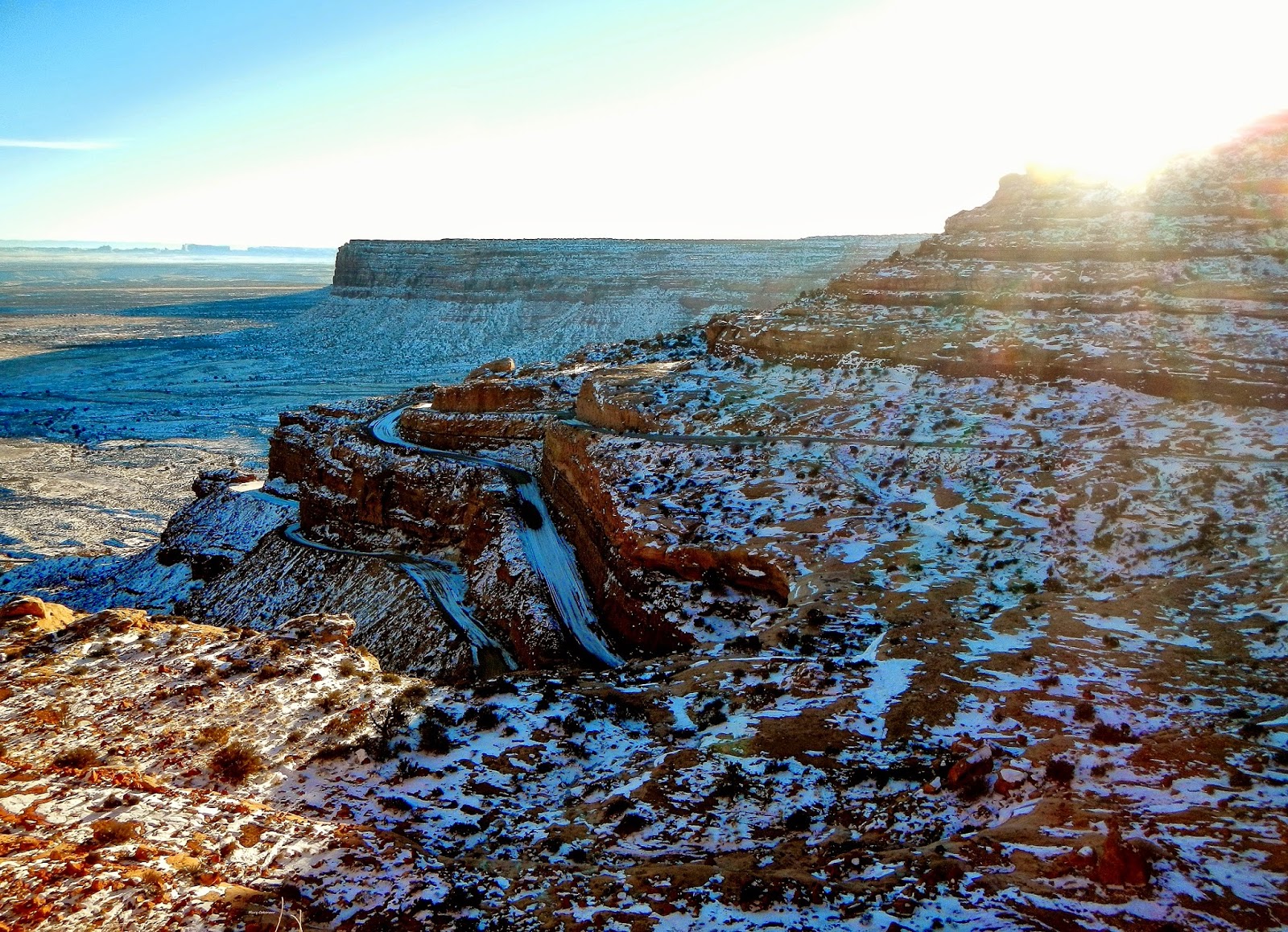 Since it gets dark by 5:30pm now, we left Monument Valley at 3; however, the Moki Dugway called to us and we took the trip upwards.  The more shadier areas had some snow and ice, but nothing to worry over as we drove very slowly.  Now I have to tell you that going down is still more fun and exciting, to us, than going upwards.  The passenger gets a great view of sandstone walls, but cannot see pass the driver's head and body.  The driver is so busy paying attention to the winding road, who has time to look at the landscape!?!  We did pull into the parking area that allows you to photograph almost the entire Moki Dugway, Cedar Mesa and the valley below.  Now while the Moki Dugway is still firmly packed down dirt and the road to Muley Point is gravel; Route 261 is now fully paved (used to be only partially paved).

Route 261 goes through the Grand Gluch/Cedar Mesa area and connects with Route 95 where you can go to Natural Bridges National Monument, or to Blanding (Route 191).  We were headed home, so we headed towards Route 191 and north to Monticello; we had come full circle.  The Bears Ears came into view way before we reached 95; we still could not see the similarity to an actual bear's ears though.  Using A LOT of imagination, I could see the eyes and snout laid out in the landscaping below the formations, but in no way did the formations themselves look like ears.

Driving down 95, our beautiful pink sky mixing with the blue; the moon smiling down on the planet, wishing us all a good night and sleep tight.   How much more serene can it get!?! 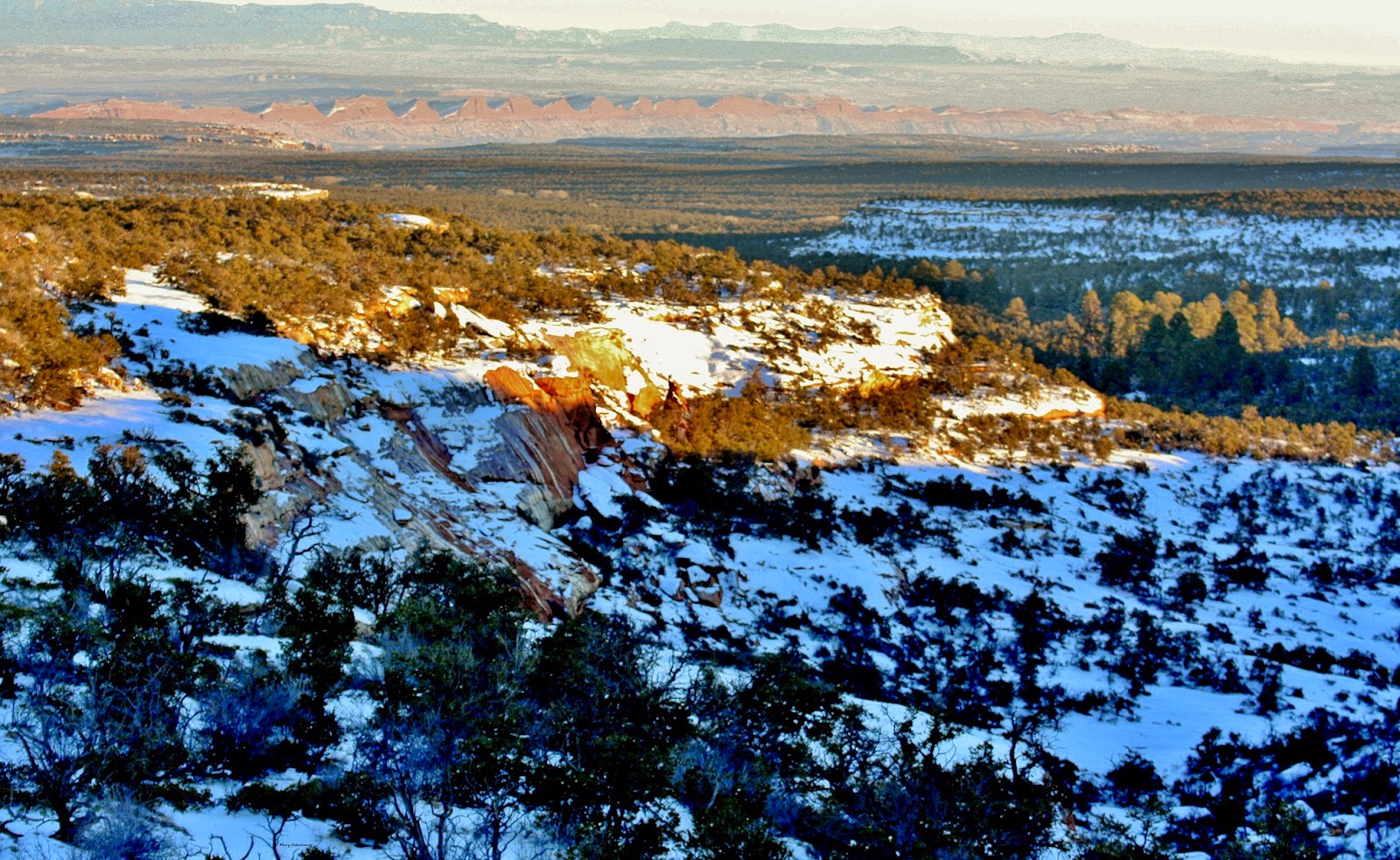 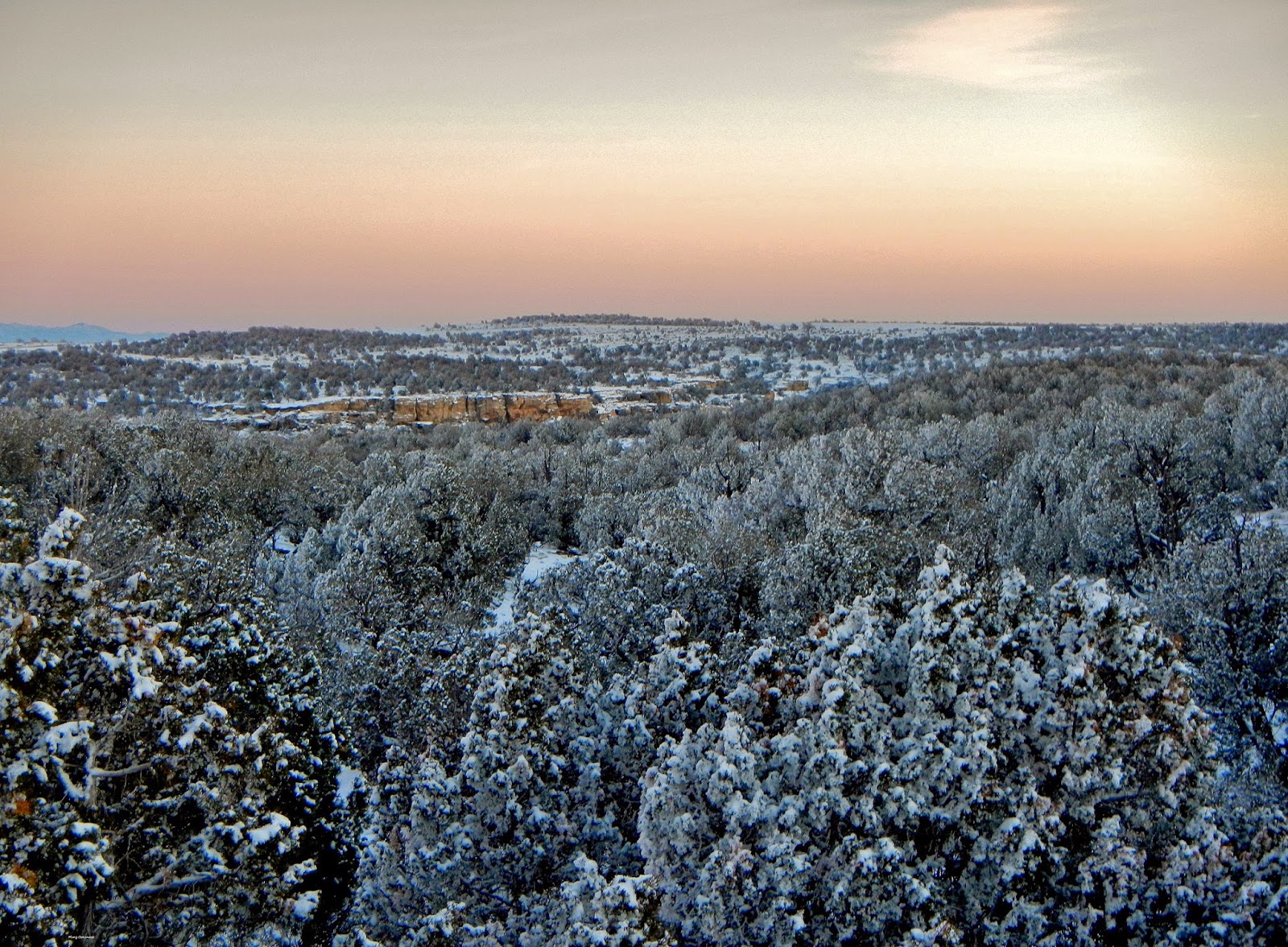 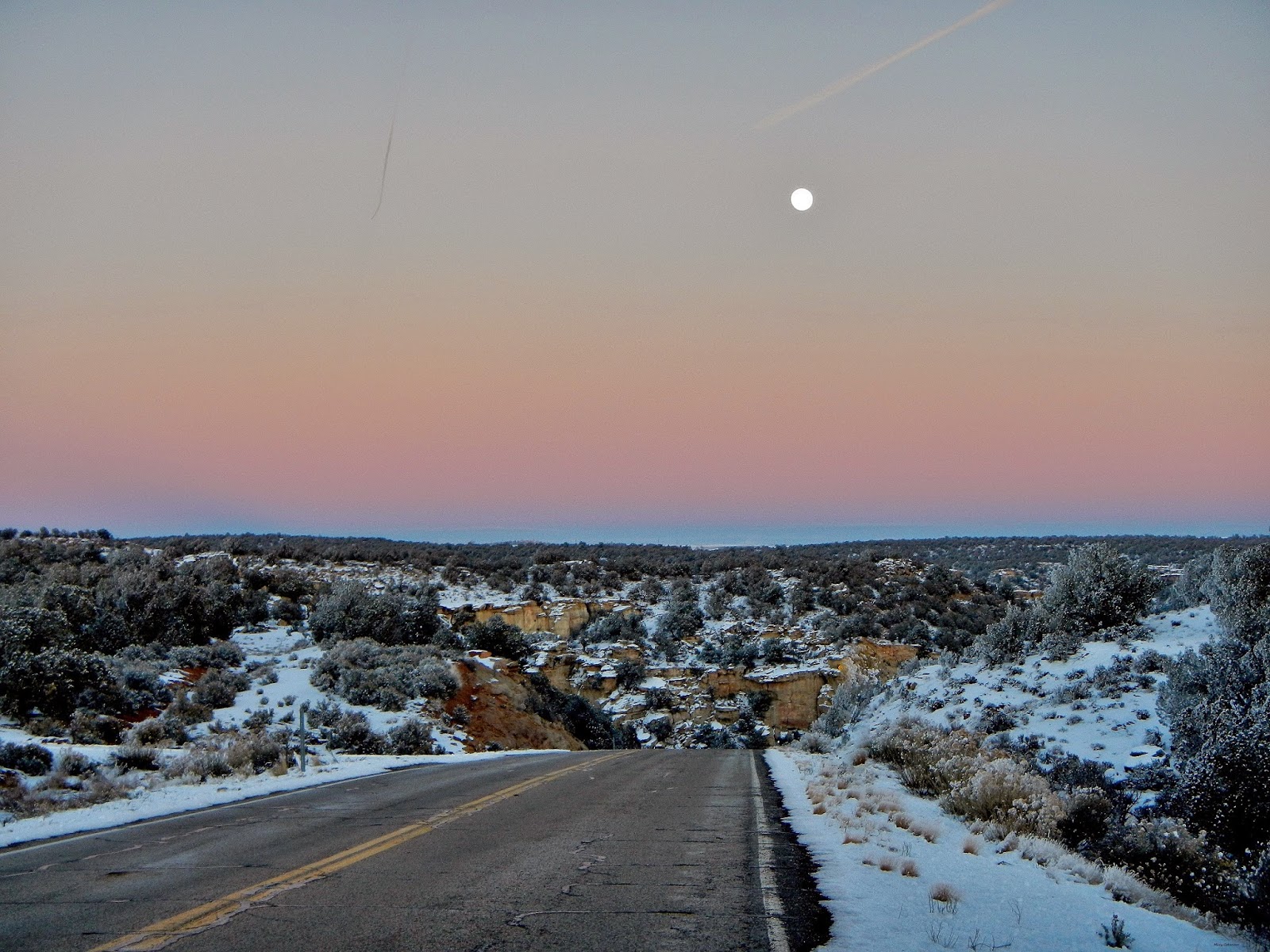 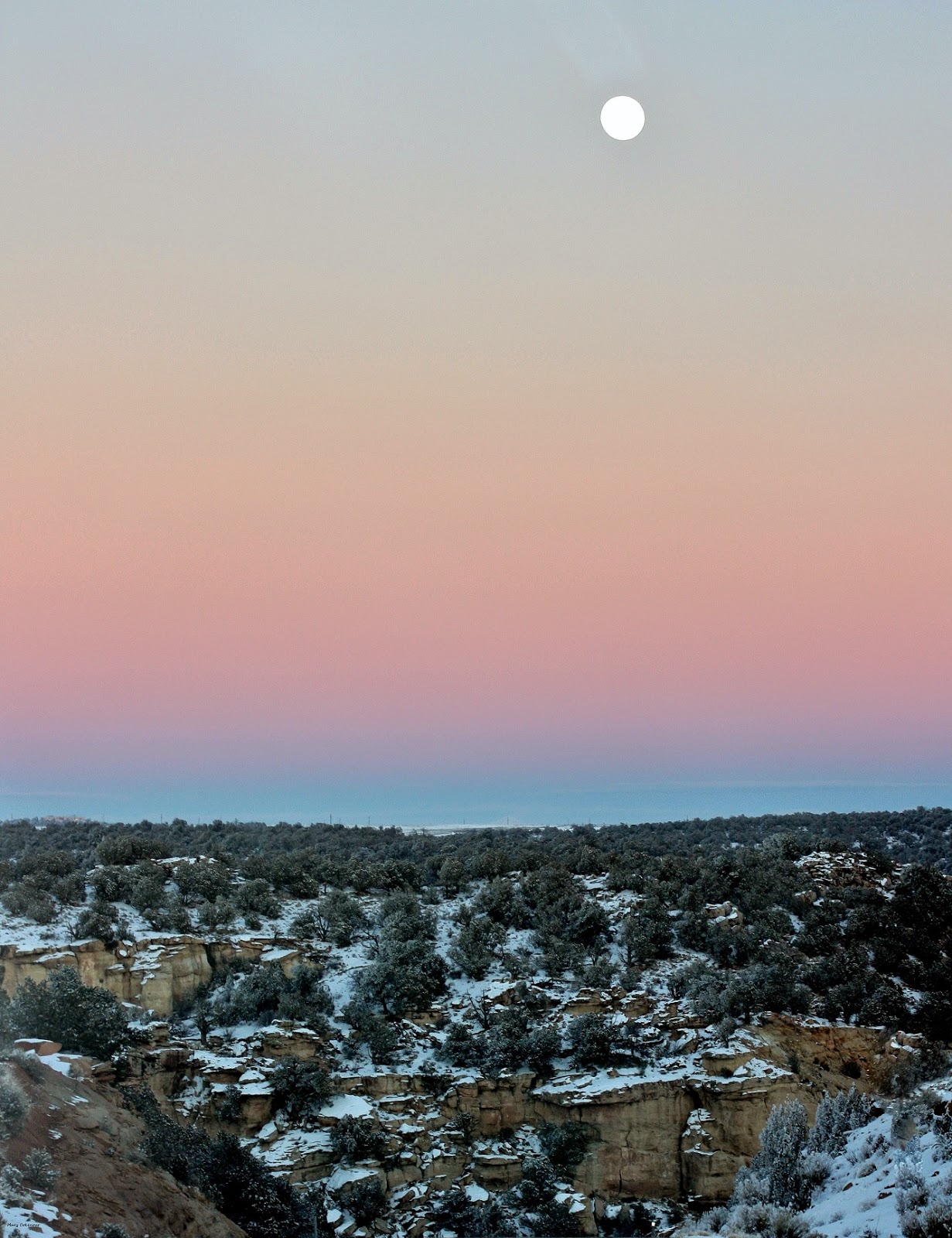 So, this is our typical winter down here in the southeastern corner of Utah. Might not be your cup of tea, but it is what it is; the desert won't change to accommodate anyone but herself.

Posted by Mary Cokenour at 1:55 PM