This adventure took us a good part of the day, namely because the Alkali Ridge Historical Landmark is difficult to find. Oh, it's listed on maps, but good luck getting specific directions to the site, and there are no signs indicating its location. These were the directions that one online site (Visiting the Ancients) gave to find the ruins, "Access is via a well traveled gravel road suitable for lower clearance two-wheel drive cars (watch out for oil field trucks) and several 4-wheel drive stem roads accessible with high clearance four-wheel drive vehicles. The 4-wheel drive roads on Alkali Ridge also offer some decent mountain bike rides (another way to get from site to site). For the driver, you need only to park any place on the mesa, walk into the trees, or out into one of the clear areas, and start looking around."

There are obvious problems with these directions: #1 - Which gravel road is being referred to, Alkali Point Road (CR 204) or Mustang Road (CR 207)?  The historical landmark is located within a canyon between these two roads; from Alkali Point the cliff dwellings can be viewed from across the canyon.  #2 - To get to the mesa top ruins, the instructions state to "park any place"...really?  Could the writer of "Visiting the Ancients" be a little more specific at all?  What we have figured out is that the mesa top ruins are both sides of both roads (Alkali Point walking westward, Mustang Road walking eastward), and we believe we have an estimate of where to park to find them.  #3 - While the two main roads are graded gravel and cars would make it over them; the access roads down into the canyon are 4-wheel drive friendly only.  Also, many of the dirt roads end at fenced in private property which you don't discover until you've traveled down them. 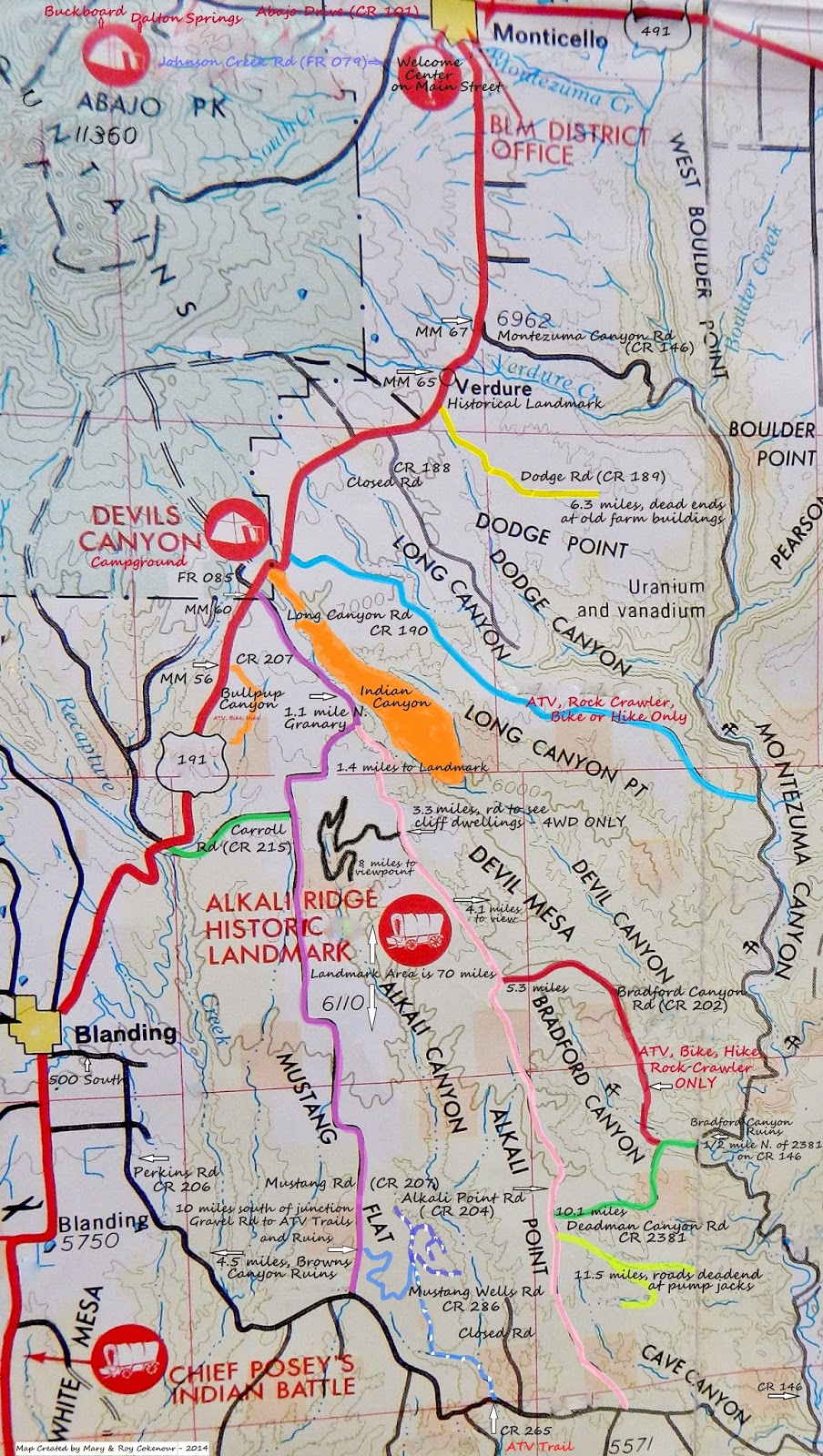 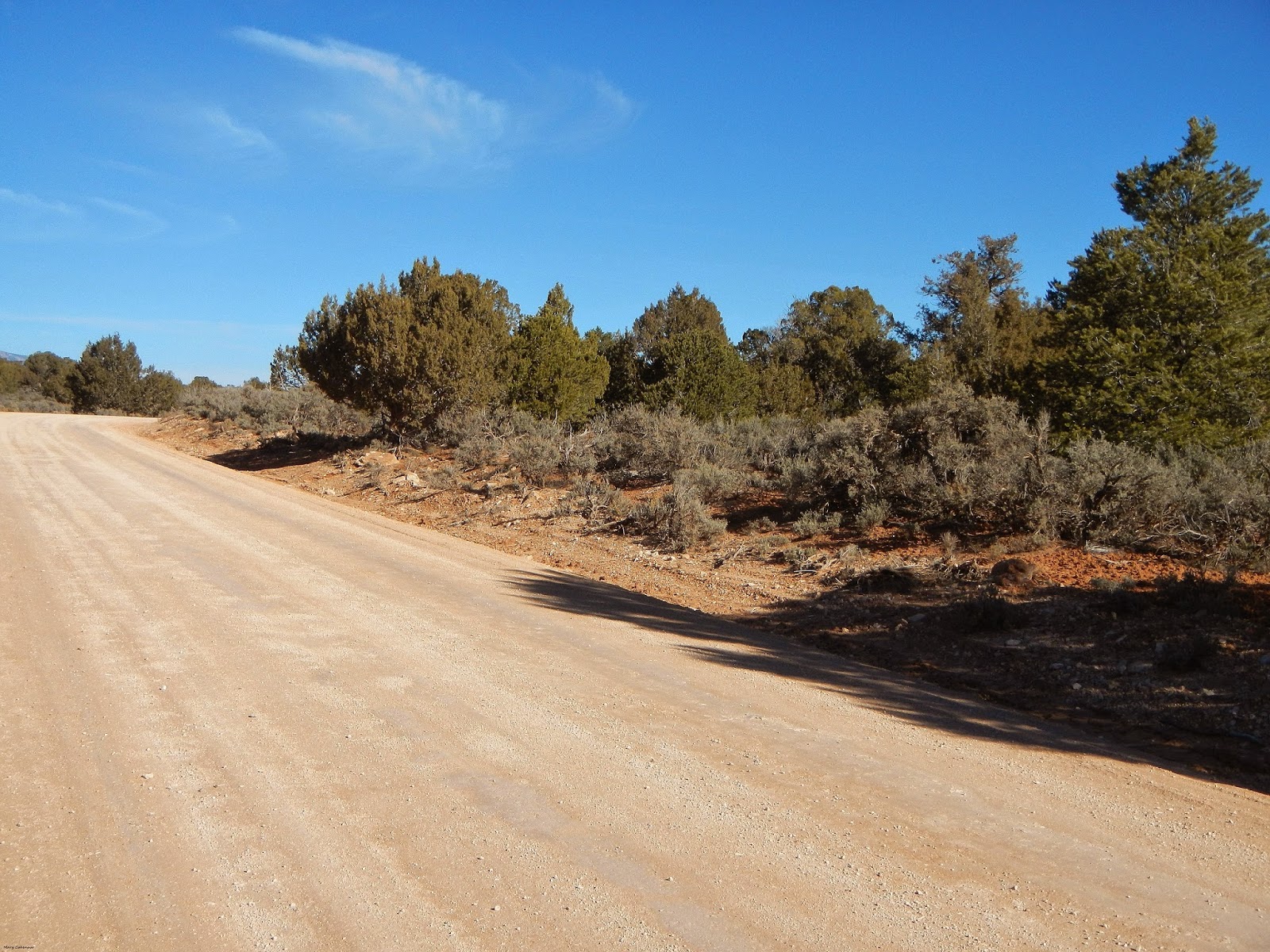 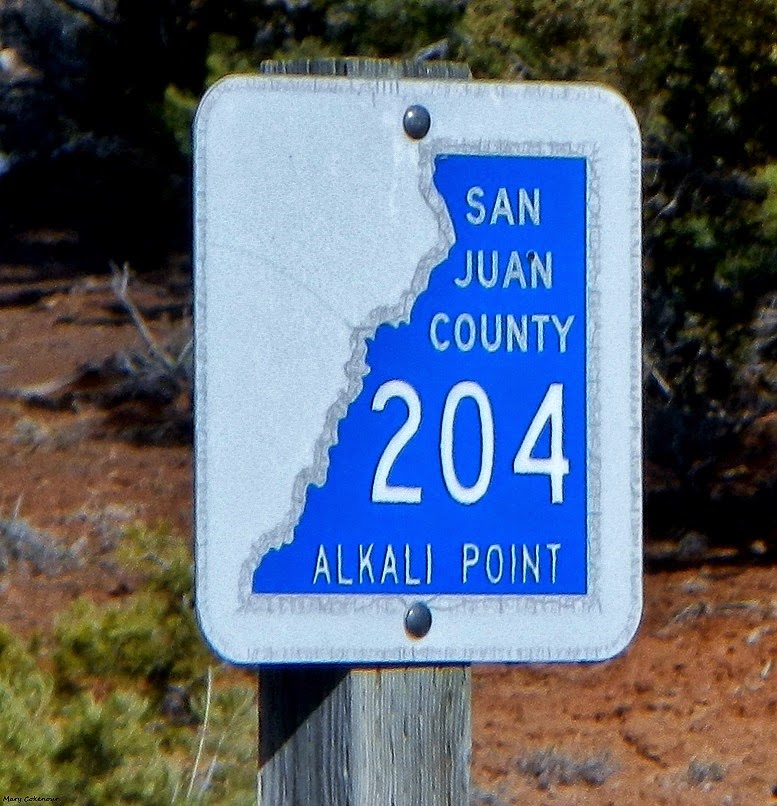 Best to get started at the beginning which is at the junction of Mustang and Alkali Point Roads; by the way, the Alkali is only about 14 miles in total distance before reaching Perkins Road (CR 206).  The road itself is mainly graded gravel, some areas flat with sage brush or dense with trees; those times when a section opens up between the trees is when you get to see the amazing surprises in the distance. 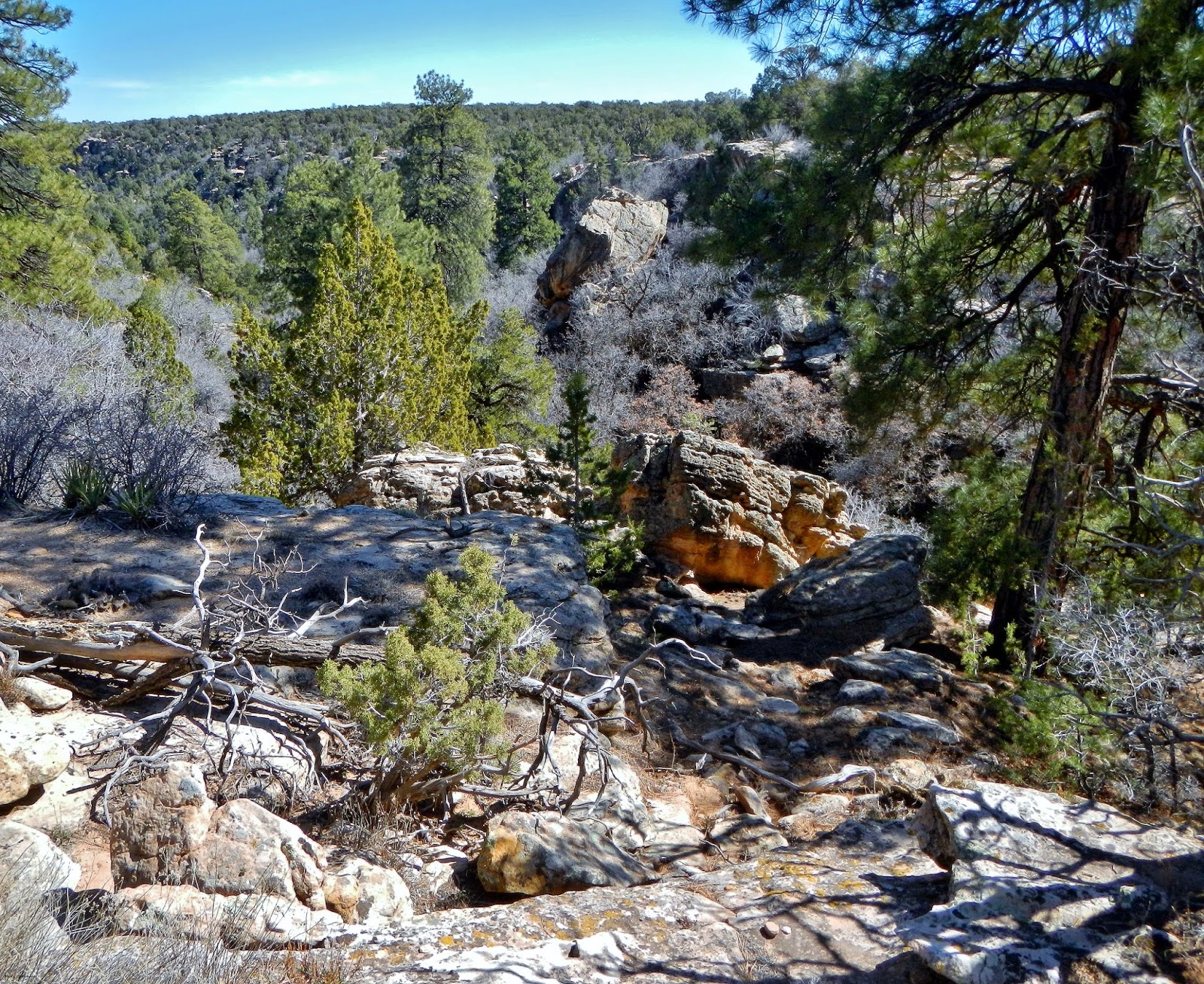 The first two miles traveling south we explored several dirt trails leading to the west; only to be disappointed by a wooden and wire fence with no trespassing and private property signs posted.  At mile 2.2 we went off on a trail that lead eastward and ended up at a beautiful primitive area with signs of it being a camping area as well.  Climbing over the huge rock formation at the end was sheer fun, as well as examining the way the elements carved out the stone itself. 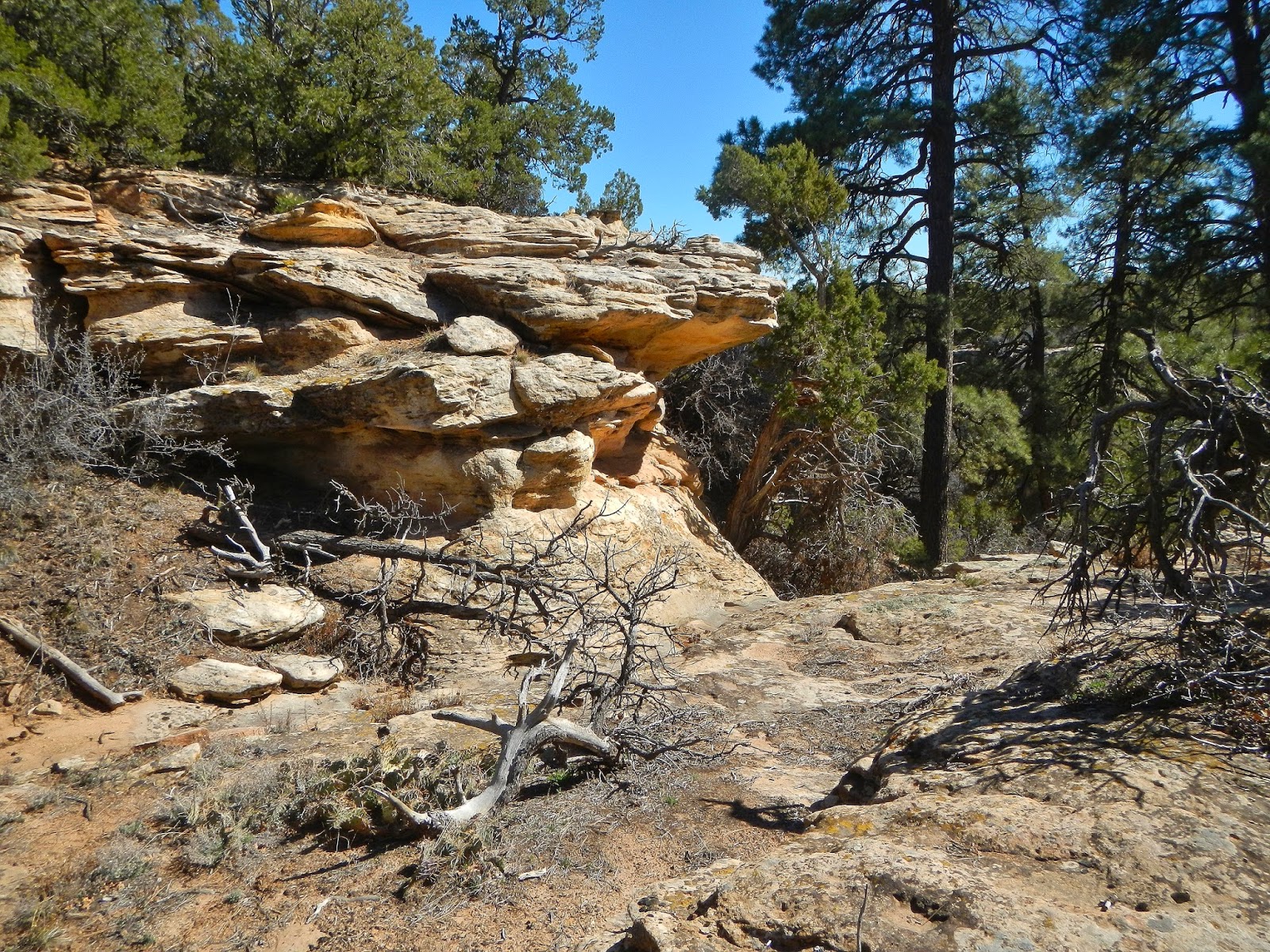 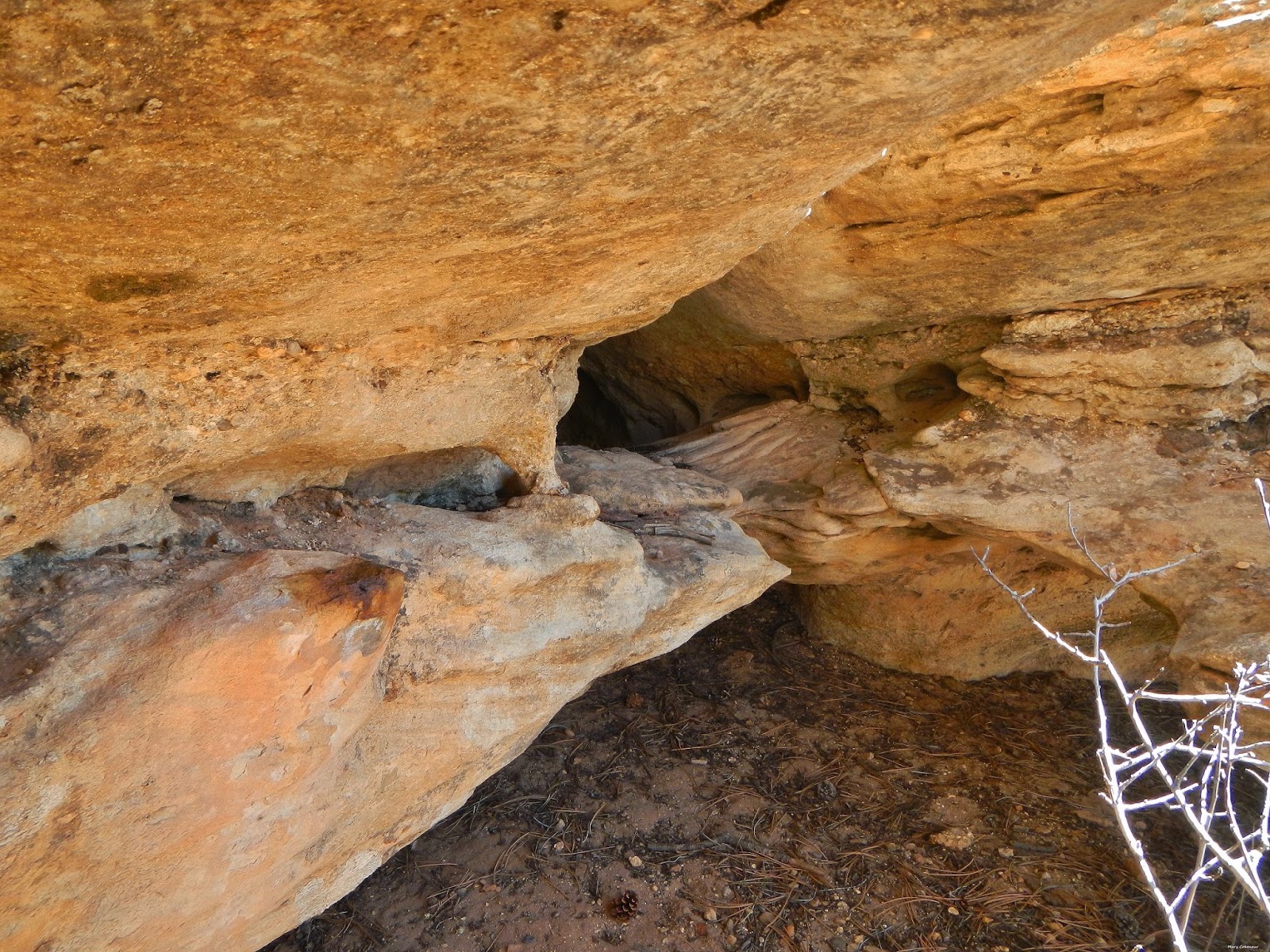 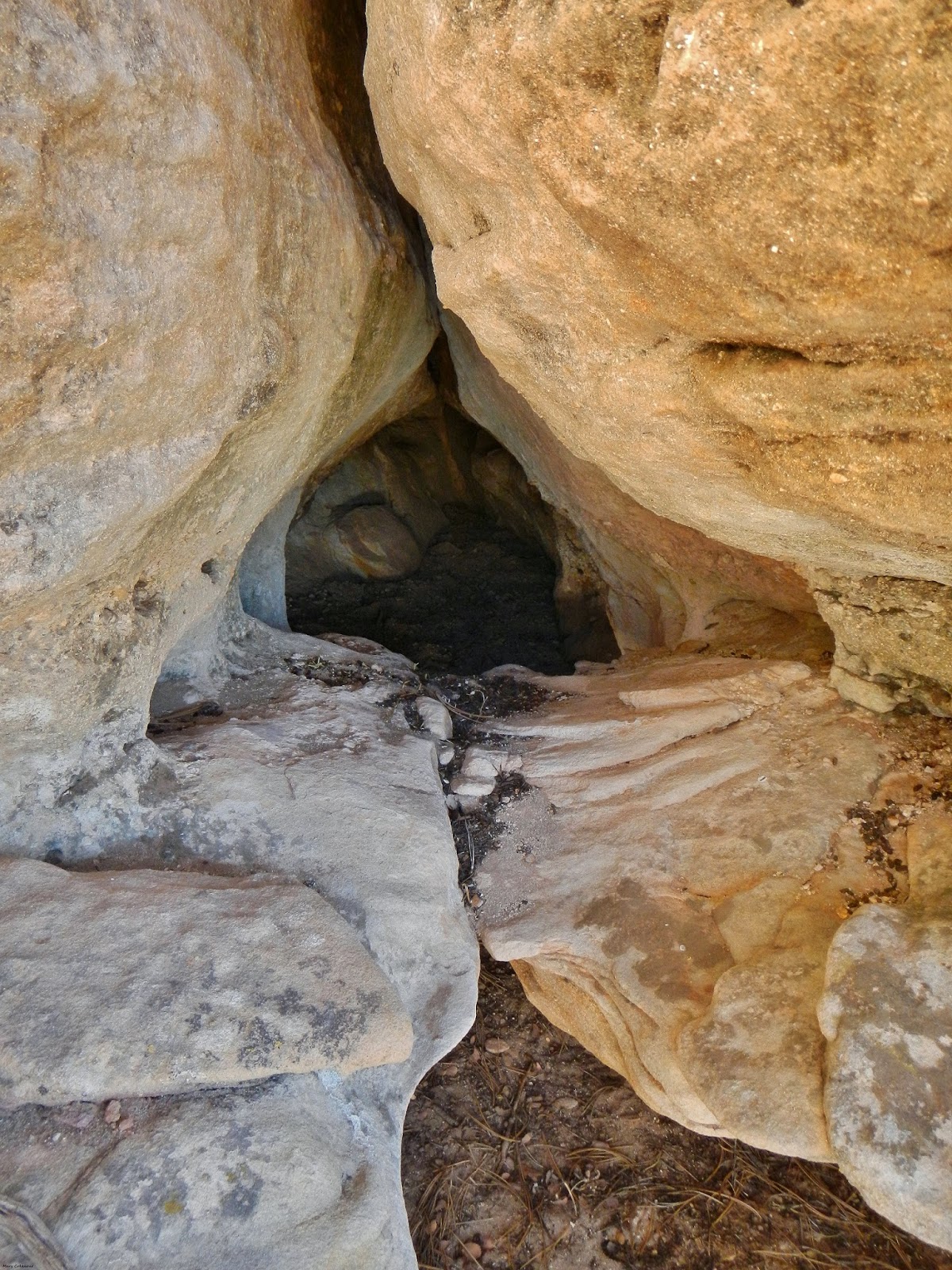 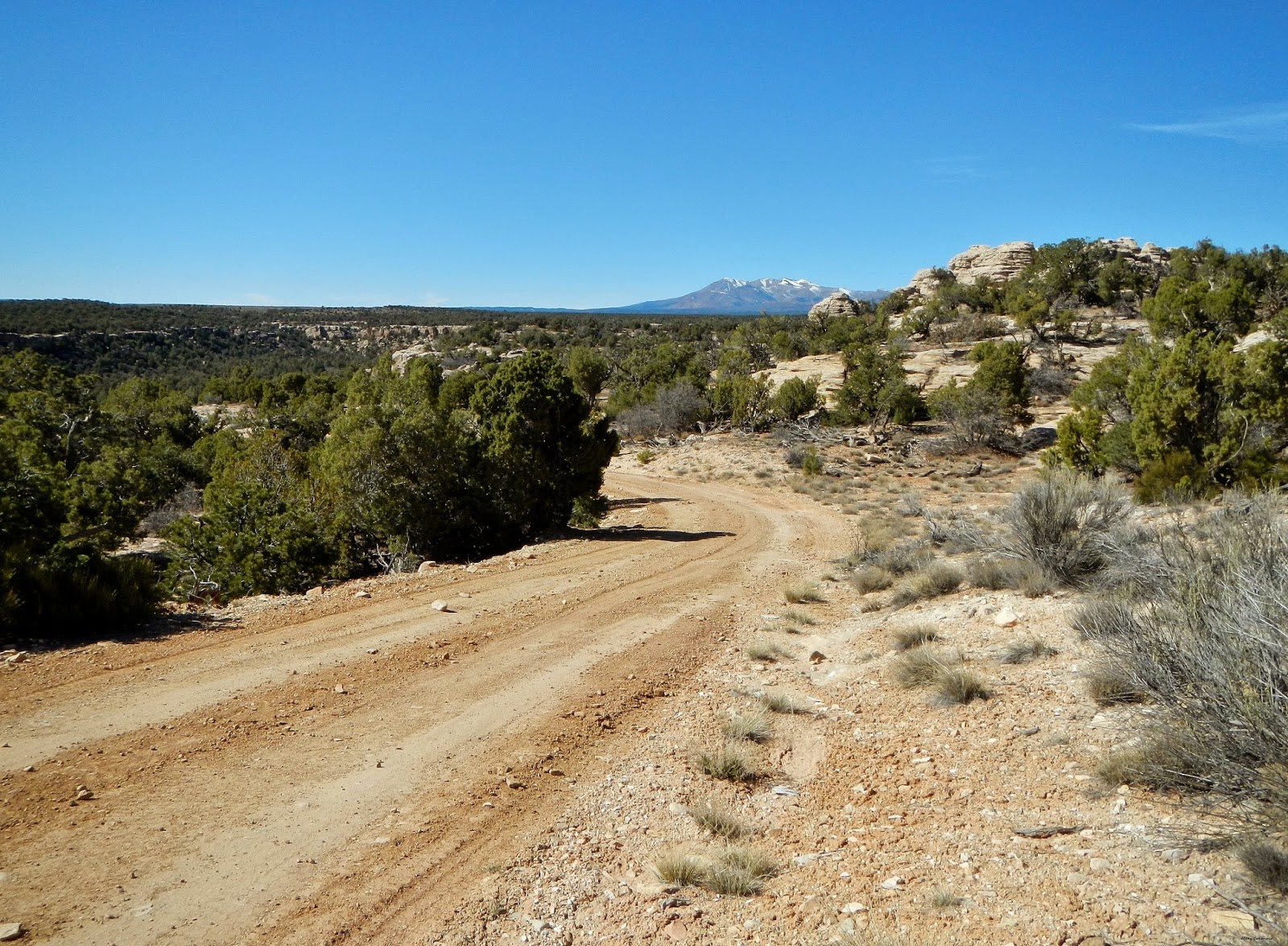 No sight of any ruins though, so the search continued to the 3.3 mile point where the road split and we went down the trail leading west once again.  While it started out as graded dirt for the first two miles, it soon changed to an unmaintained rough road not suitable for cars, but fine for 4 wheel drive vehicles.  There is a sort of "traffic circle" with the second trail leading to oil tanks and equipment; the first trail, however, went on for three miles before leading off down to the right hand side.  Only a couple of miles down we stopped to check out one series of rock formations that looked so awesome.  At the far upper right hand corner, it looks as if a pig is kissing a crocodile; or is the pig about to become the croc's dinner? 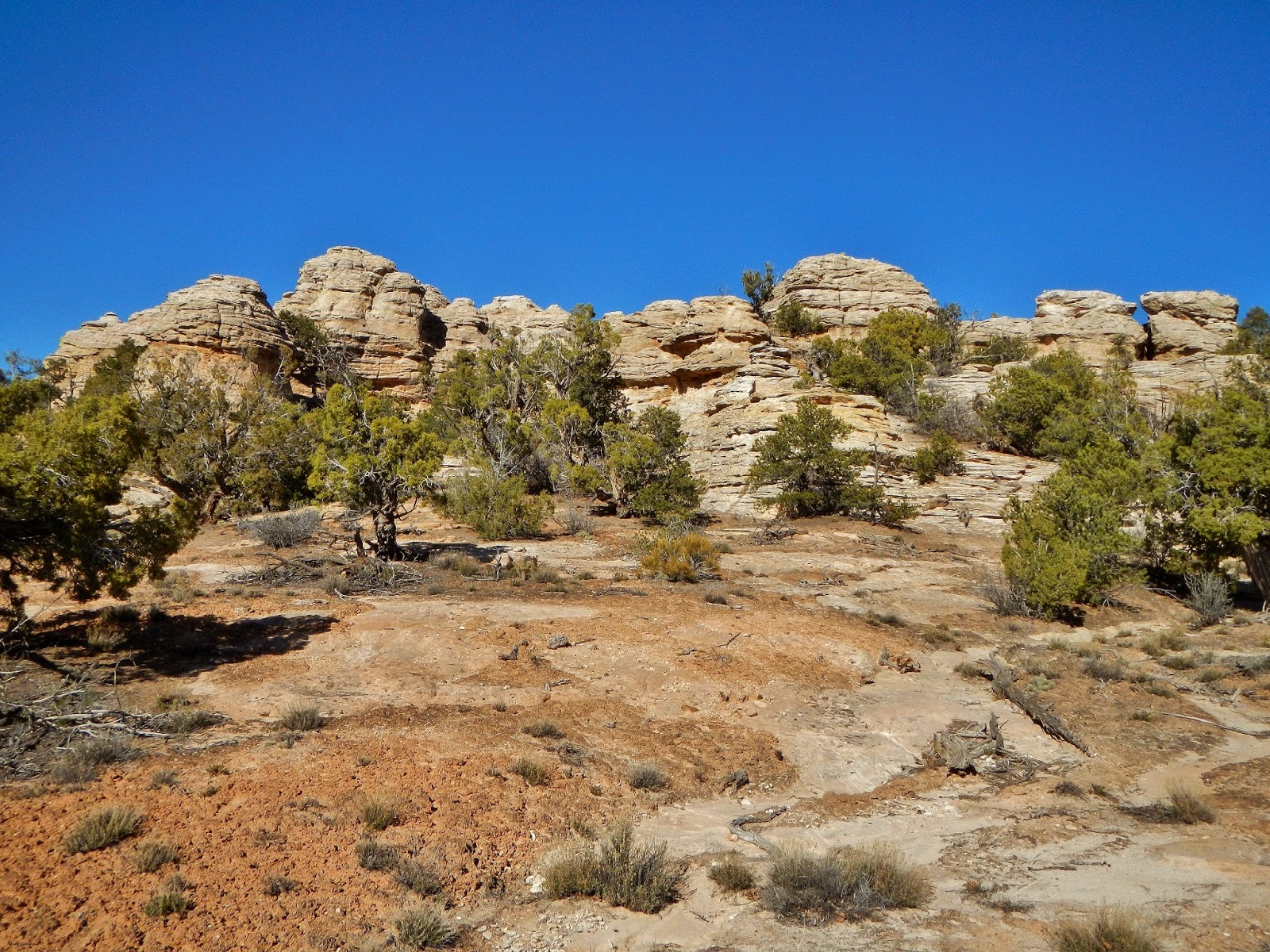 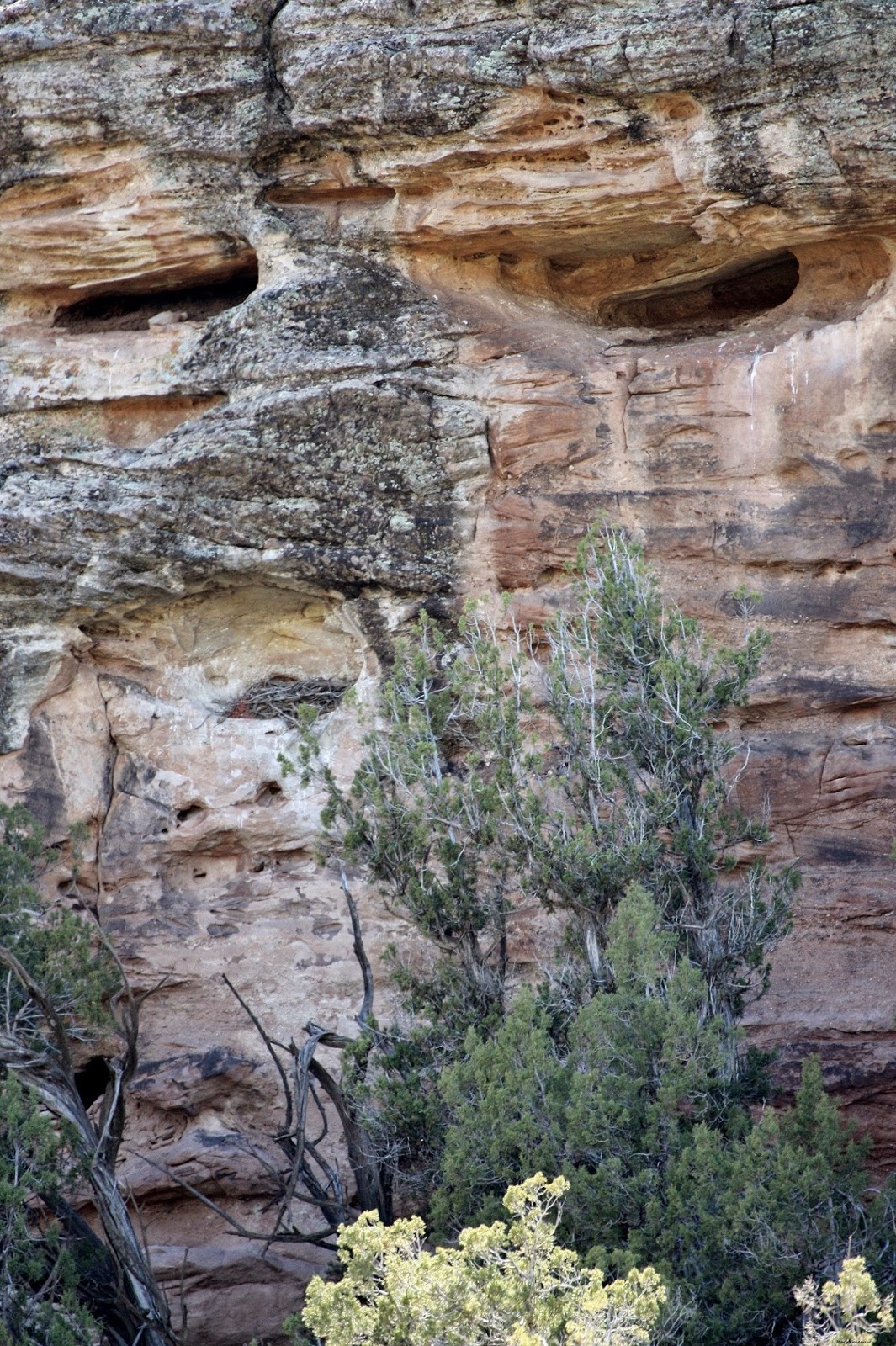 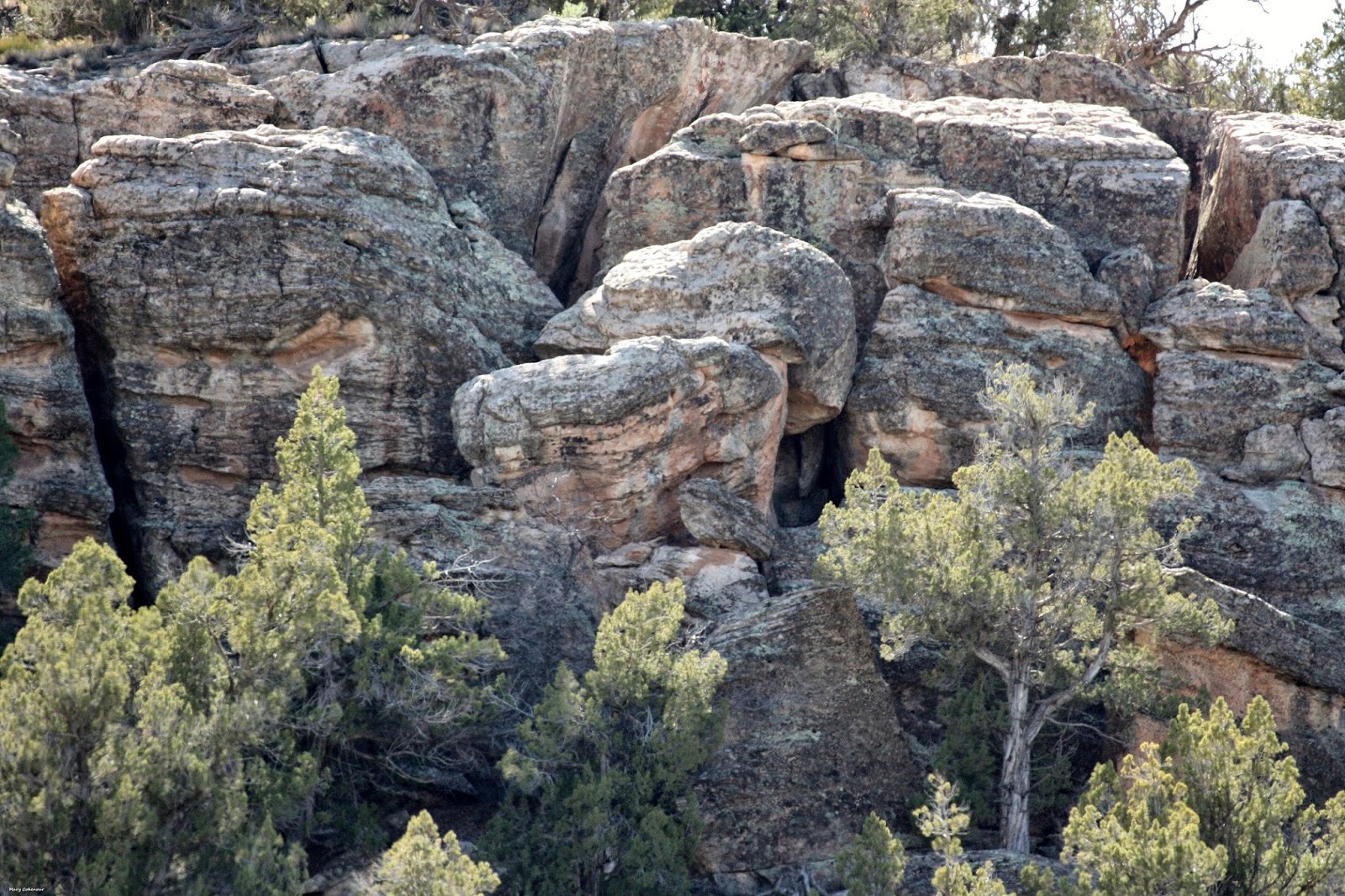 Anyway, it was at eight miles down that we began seeing the cliff dwellings along the Alkali Ridge walls; the only way to walk to them was to park and do a bit of hiking.  We thought about driving through the dried river beds, but were concerned about getting stuck in the deep sand.  I've included a few photos of just the walls themselves, so you can see how easily it is to miss the ruins with all the cracks, crevices and caves. 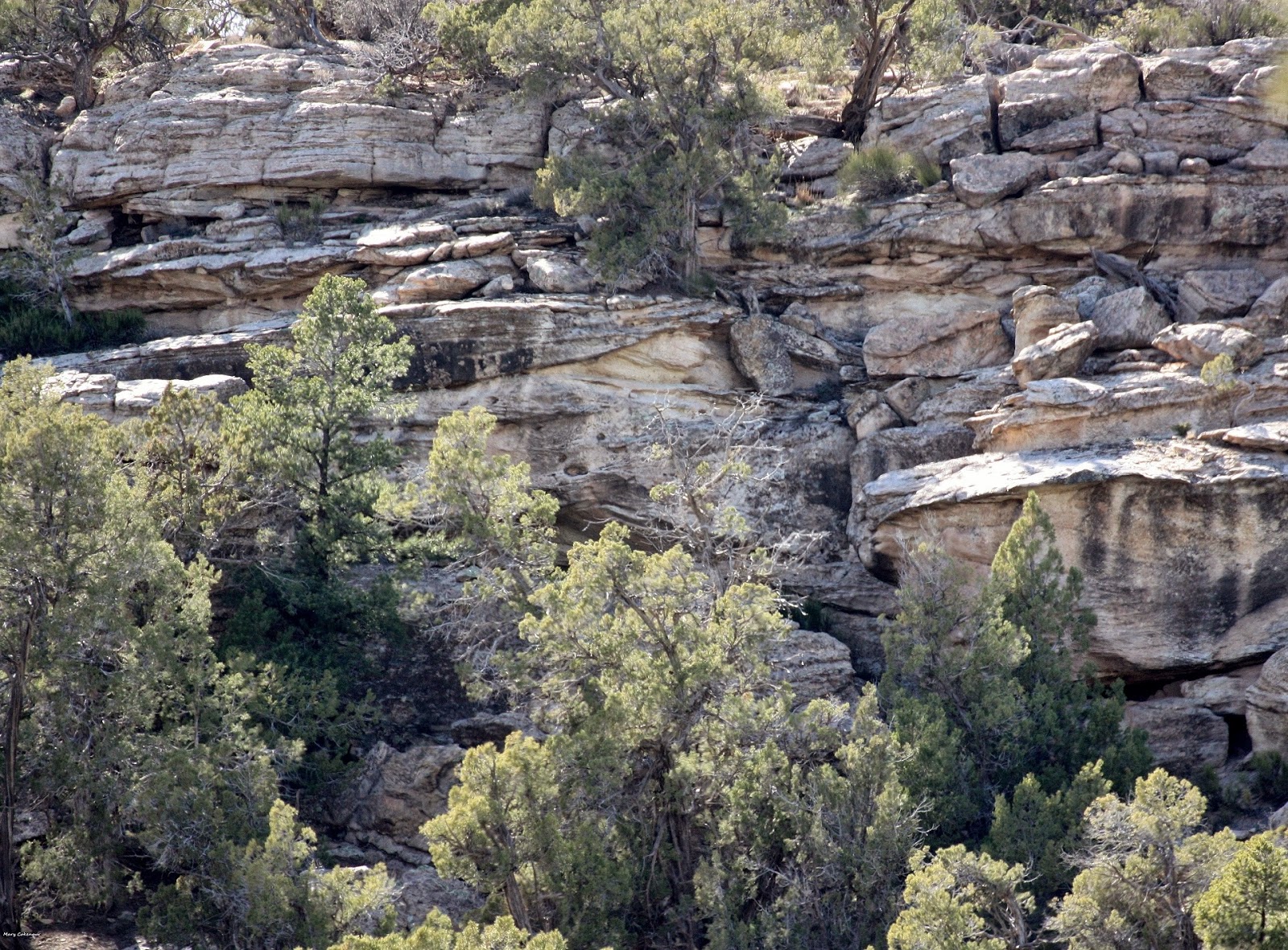 Welcome to the Alkali Ridge Historical Landmark, placed on the National Register in 1964, which are fine examples of the earliest forms of Puebloan architecture (c. 900 CE – c. 1100 CE).  Pottery found in this area was sent to the University of Pennsylvania; cacao residue within proved that the ancestral people of that era were using chocolate even before the Aztec of Mexico.  The "cacao pottery" was not of the typical "black design on white base", but rather "black design on red", or better known as "Deadman Black on Red"; the sandstone coming from Deadman Canyon.  The pottery is currently included in "Chocolate - The Exhibition" at the Natural History Museum of Utah, located in Salt Lake City, Utah.   Most likely, indication signs are missing due to the locals not wishing the area to be visited by "outsiders", but this exhibit is drawing attention and the curious will be coming. 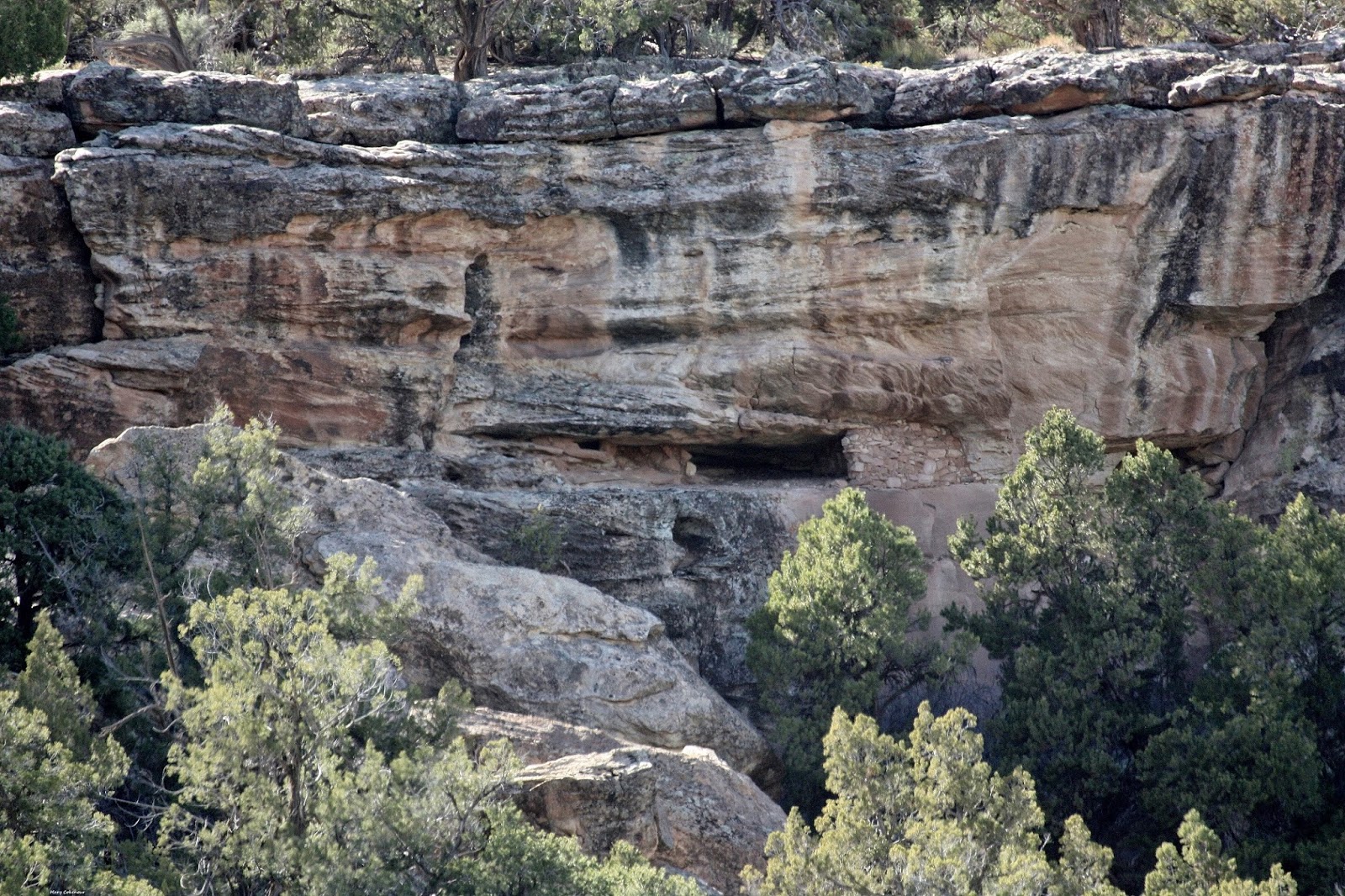 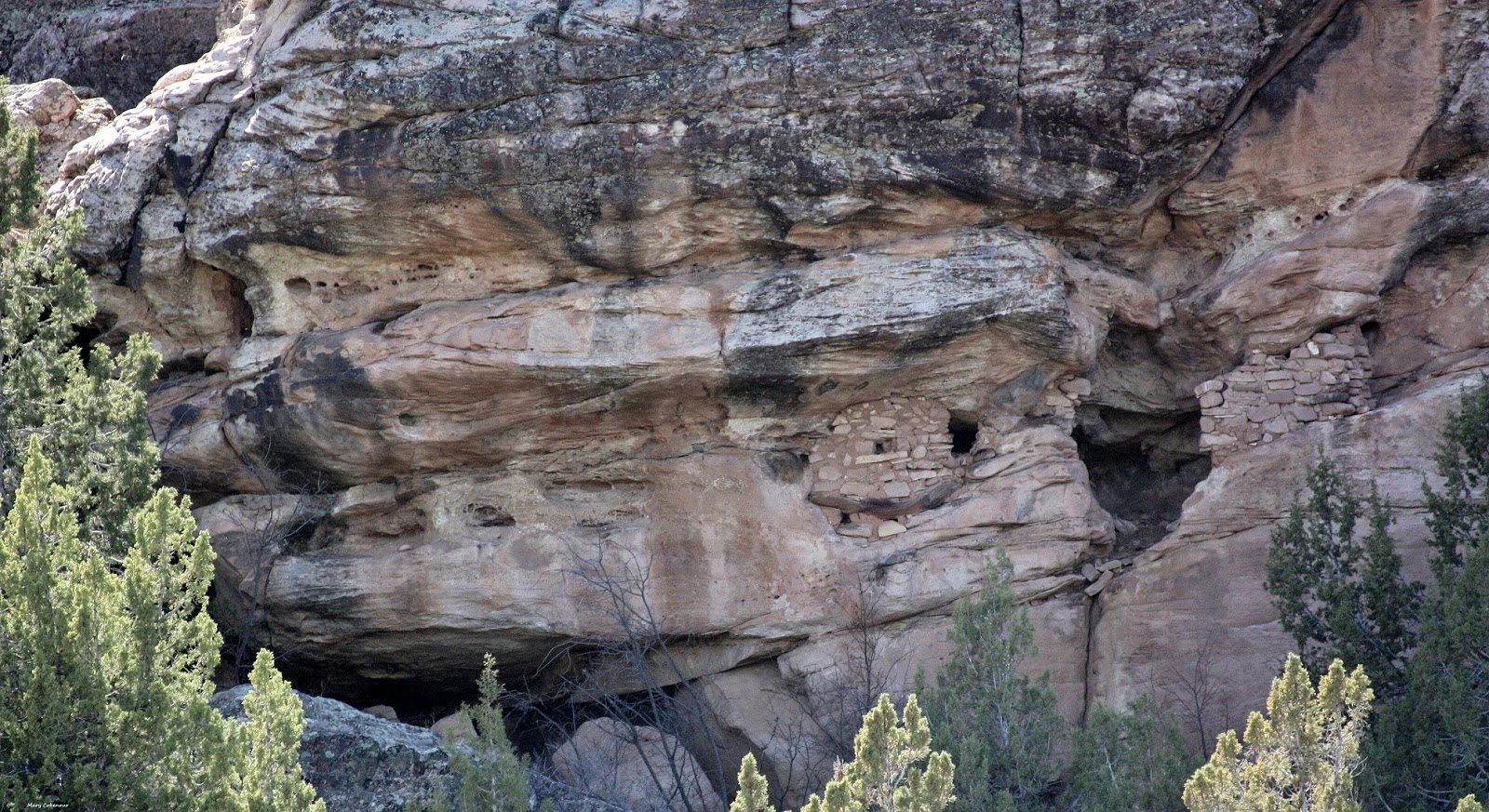 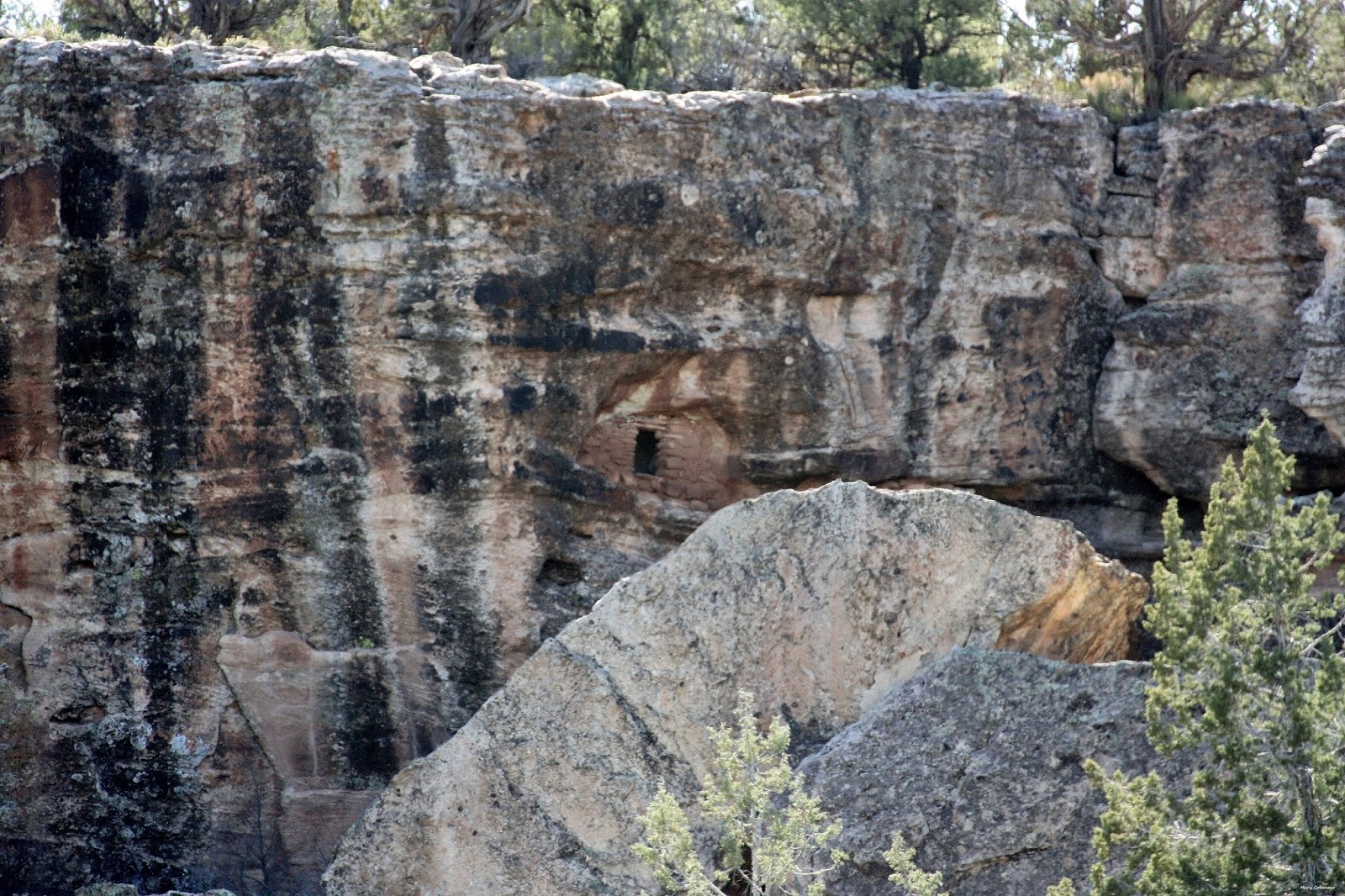 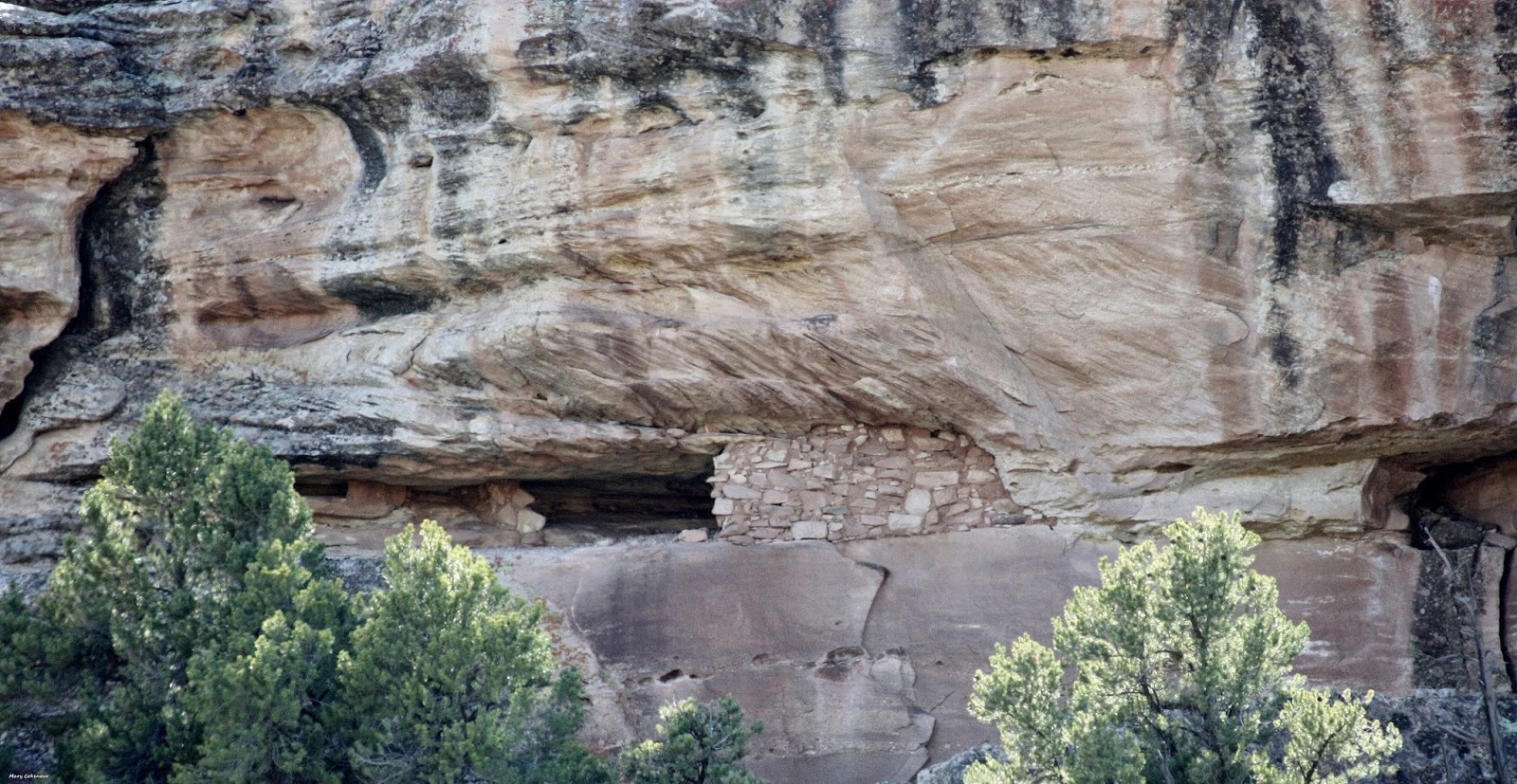 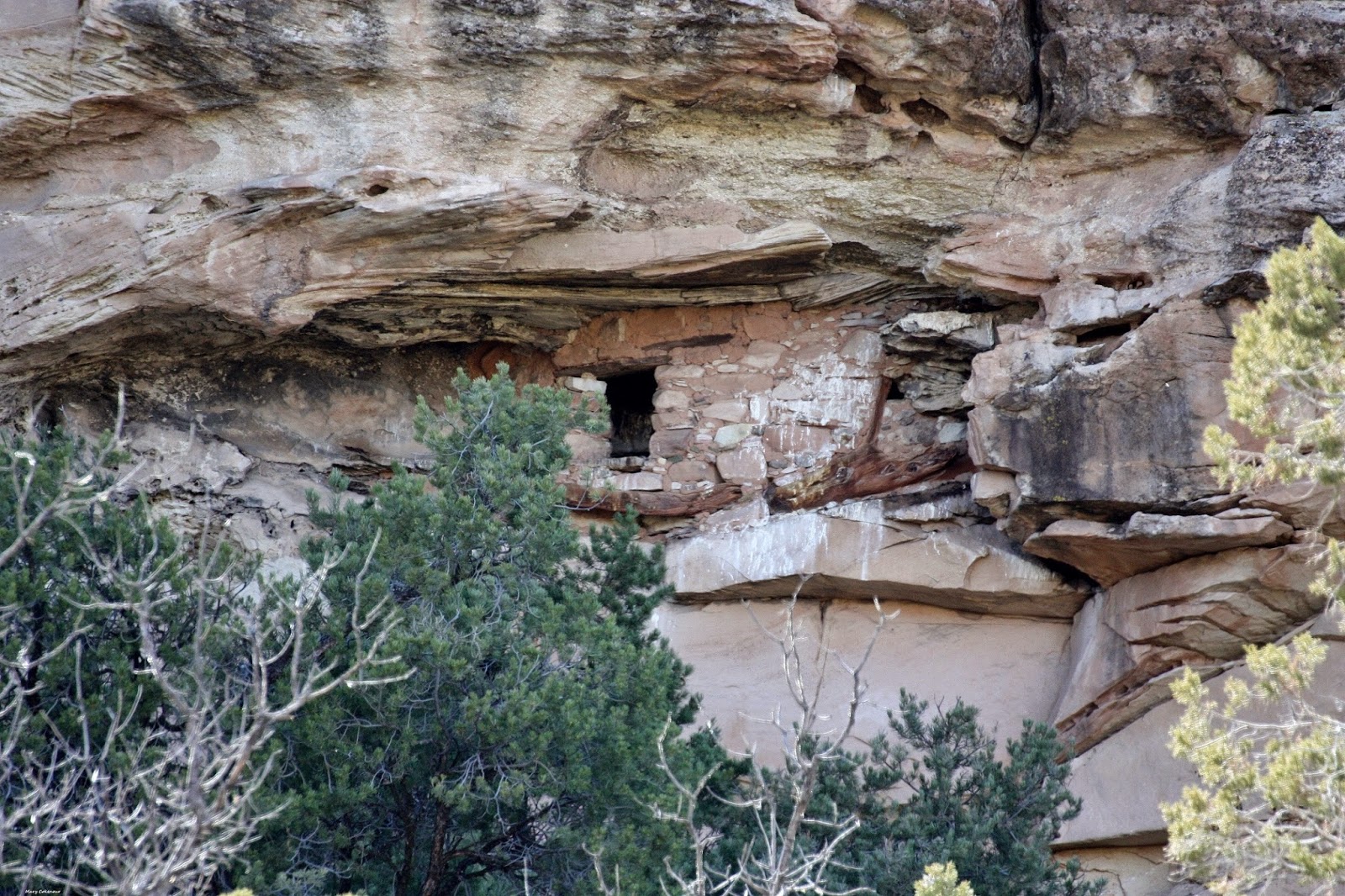 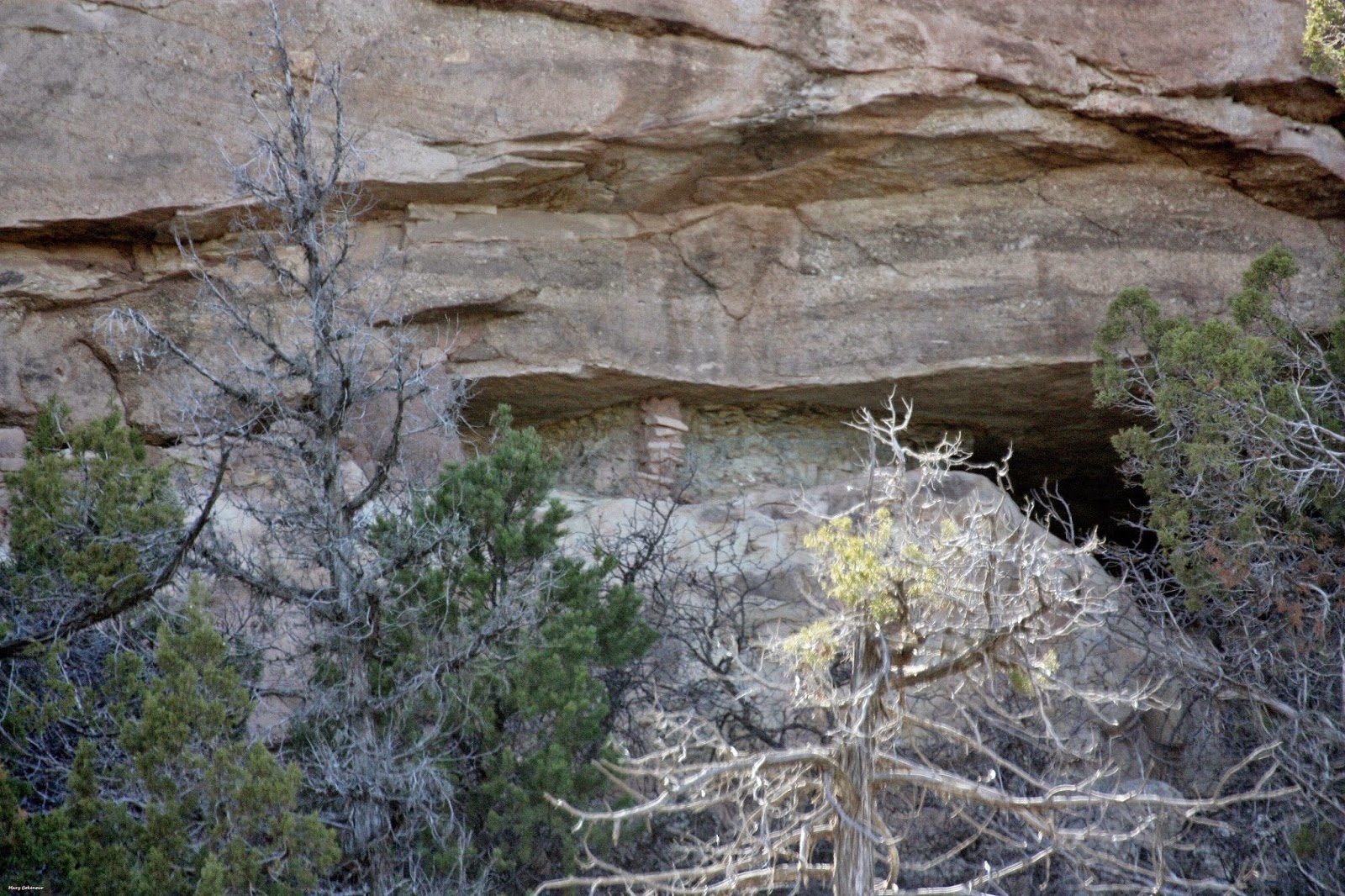 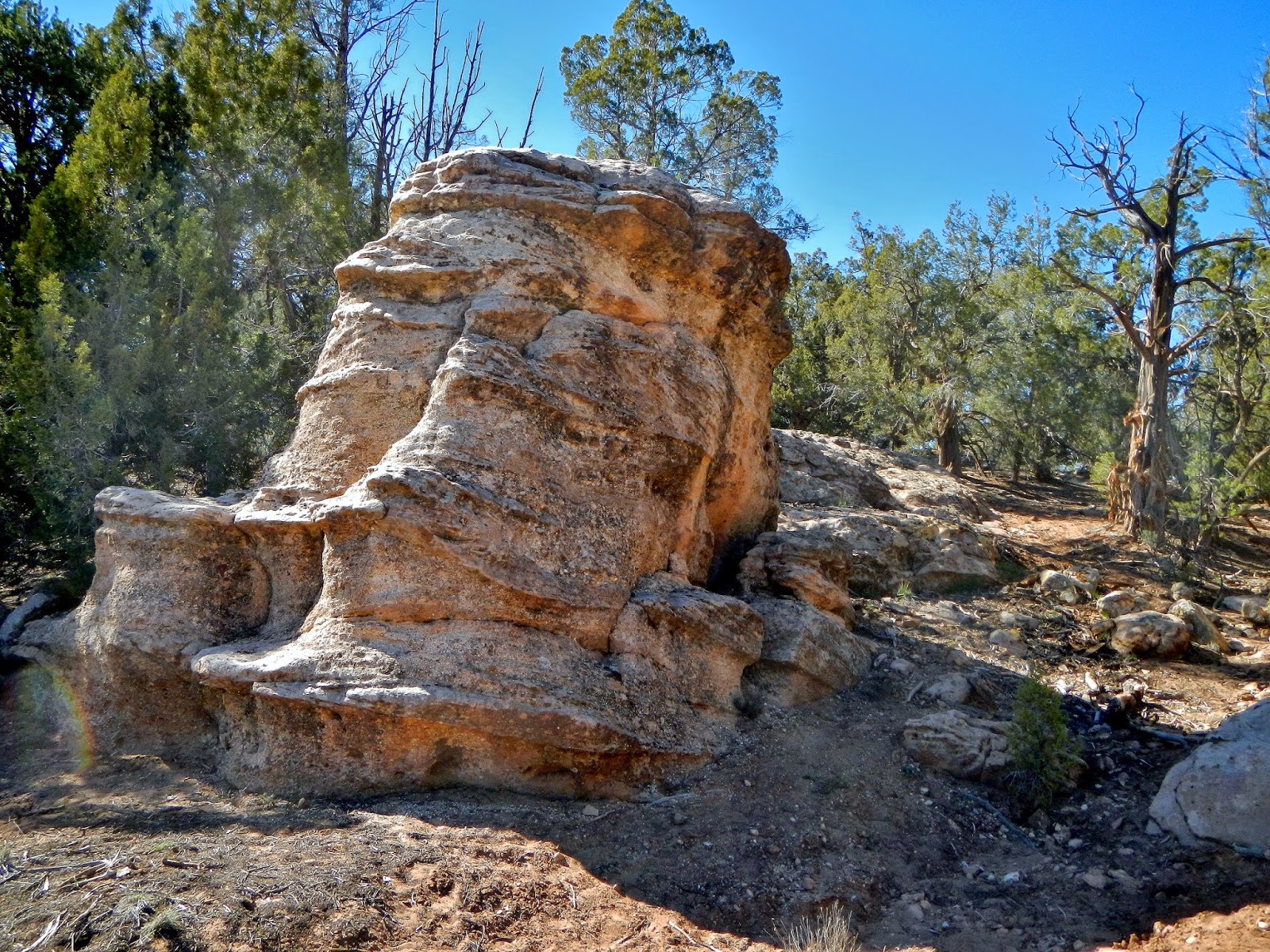 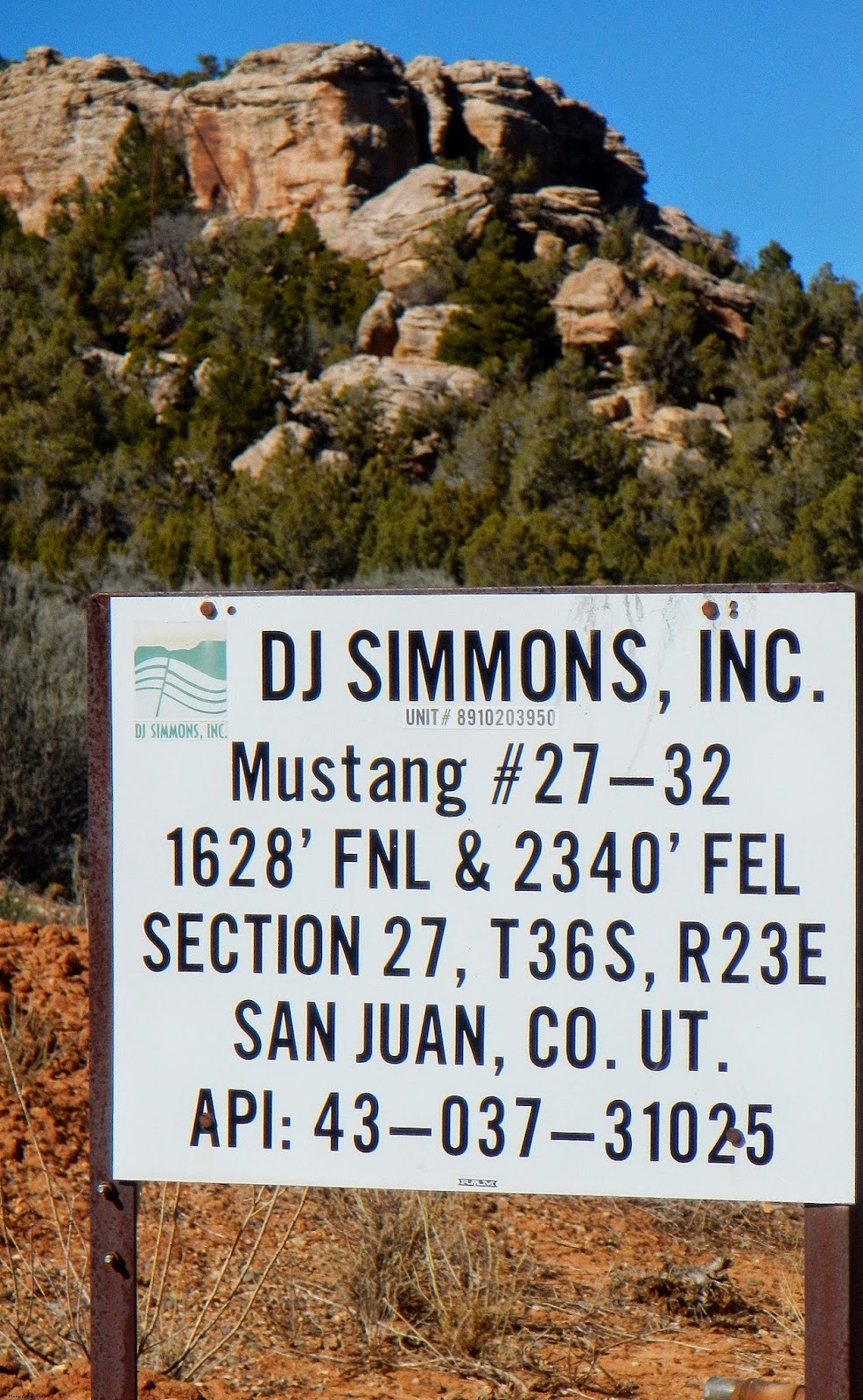 This road is also the home of petroleum and gas extraction; it ends at the 8.5 mile mark at a beautifully primitive area which has been clearly used for camping. 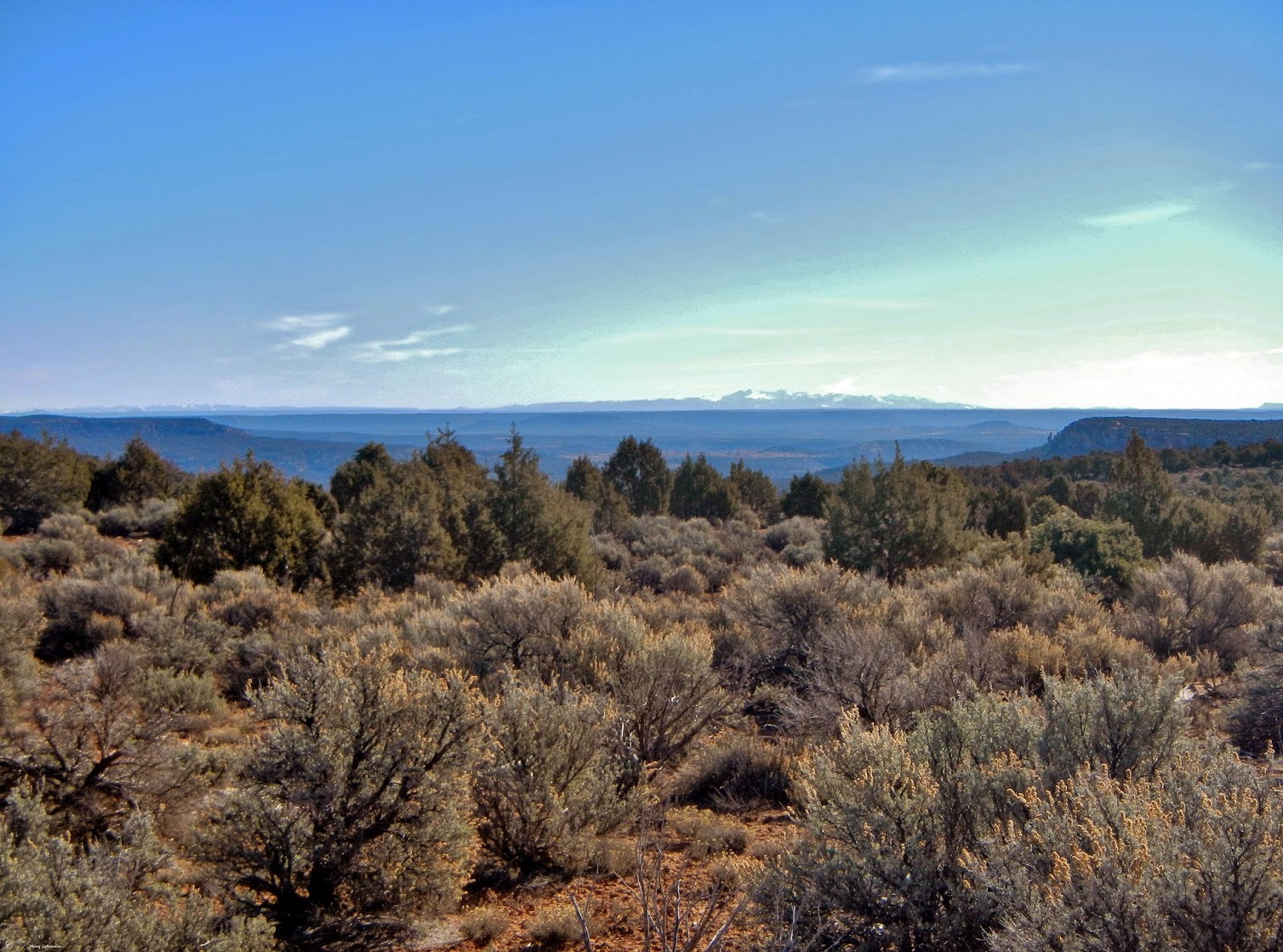 Backtracking to Alkali Point Road, we headed on south towards Perkins Road which would take us either to Blanding, or towards Montezuma Canyon Road (CR 146).  At mile 4.1, the east side of the wooded area opened up to this amazing vista; a glance at the map indicated this was Devil Mesa.  I noticed a large straight structure sticking upwards on the side of the mesa, so pulling out the zoom lens...well what do you know, I found the devil himself residing right here in San Juan County.  The structure is a pinnacle which has a "potbellied" middle and a very discernible head atop a neck, with horns pertruding out of the "skull".


At mile 5.3 is the unmarked Bradford Canyon Road (CR 202) which I've already told you is an ATVer's paradise road.  As we got closer to Perkins Road though, another section of wooded area opened up to the west; we got an amazing view of the Alkali Ridge with the Bears Ears in the far distance.  I will never ever get enough of our blue sky!


...and while this should have been named "All Roads Lead to Montezuma Canyon - Alkali Point Road" because that is where we ended up heading to, I wanted to draw your attention to the Alkali Ridge Historical Landmark.  So, find the ruins and then head on up to Salt Lake City to see the pottery exhibit, or vice versa; either way you will have a most awesome adventure.

Posted by Mary Cokenour at 3:37 PM