Trails in Lisbon Valley; Where Do They Exactly Go?

We love finding new "roads" to explore; doesn't have to be a paved road, whether simple dirt, graded gravel, smooth, bumpy; we want to know where it goes and what we'll find along it. So begins this story of a dirt trail (CR 112) that leads off of Lisbon Valley Road. As we made the initial turn onto Lisbon Valley Road, we passed by White Rock and I wanted a few photos of the rock formations, and the La Sal Mountains covered in snow, northwards of the road.

Ahead, we were treated to a cattle roundup and I was excited at the prospect of getting more photos of cowboys.  Sadly, the "cowboys" were two older gentlemen in a pickup truck, but they did have their classic cowboy hats on.

CR 112 is a dirt trail that leads out into Lisbon Valley; if you get to Big Indian Rock, you've gone too far.  Then again, you can continue on a little way to get a view of the Lisbon Valley Anticline; just make a U-turn after and head on back. 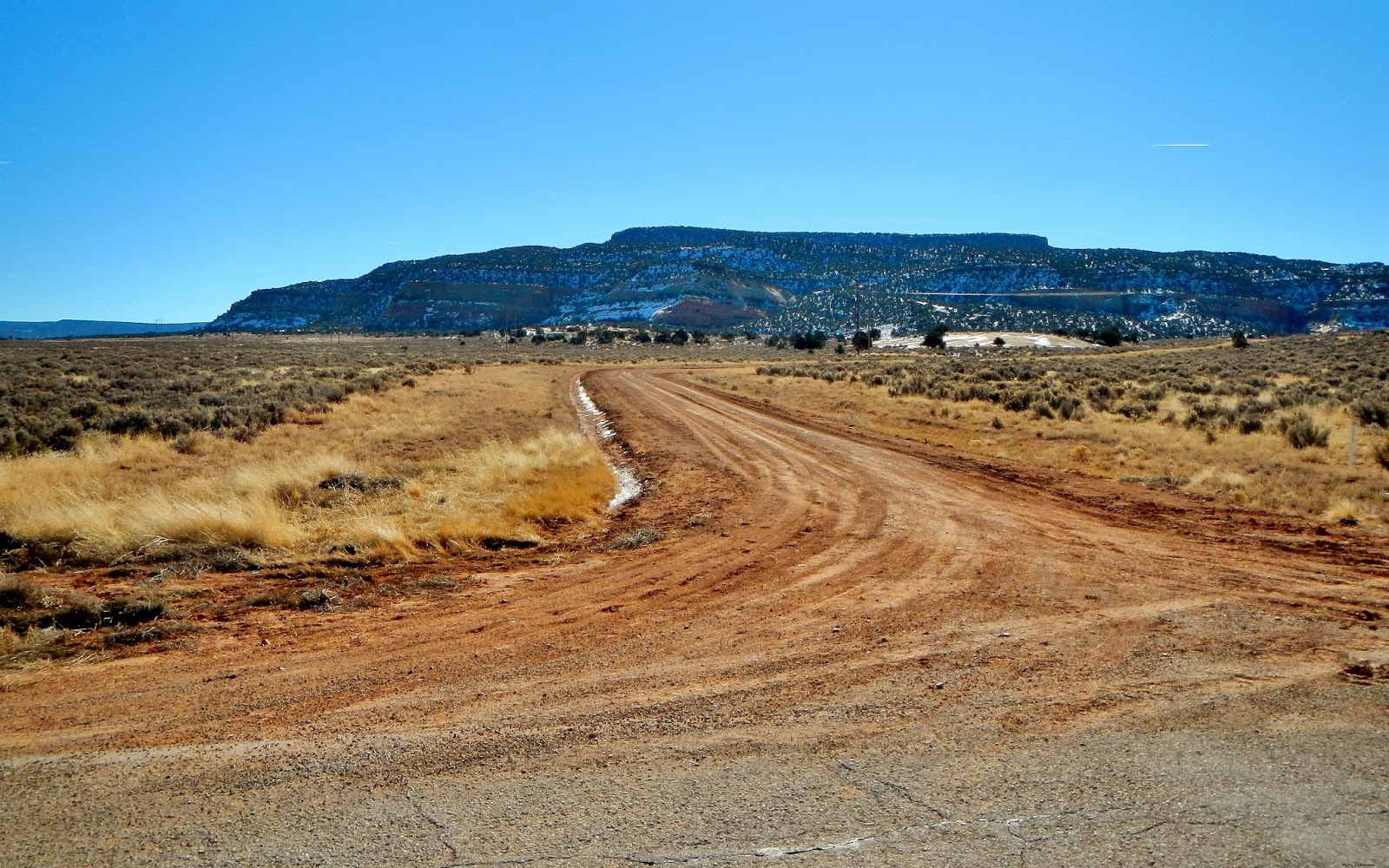 The sign for CR 112 is not until you have gone about 1/4 of a mile on the trail itself; a little white square that simply states "112".  As you make the turn onto the dirt road, Deer Neck Mesa will be in the distance; there will be a junction for CR 323 - Deer Neck Road which runs parallel to the Mesa and up to Summit Point.  CR 112 splits; the road to the left becomes narrow and while a high clearance vehicle can easily get through, it will meet a dead end point that requires ATVs to continue on.  At one point there was a steep dip into a creek and the drop was so dramatic that one end of our rear bumper actually dislodged.  Roy got out and was able to knock it back into place, but I made him apologize to his SUV anyway. 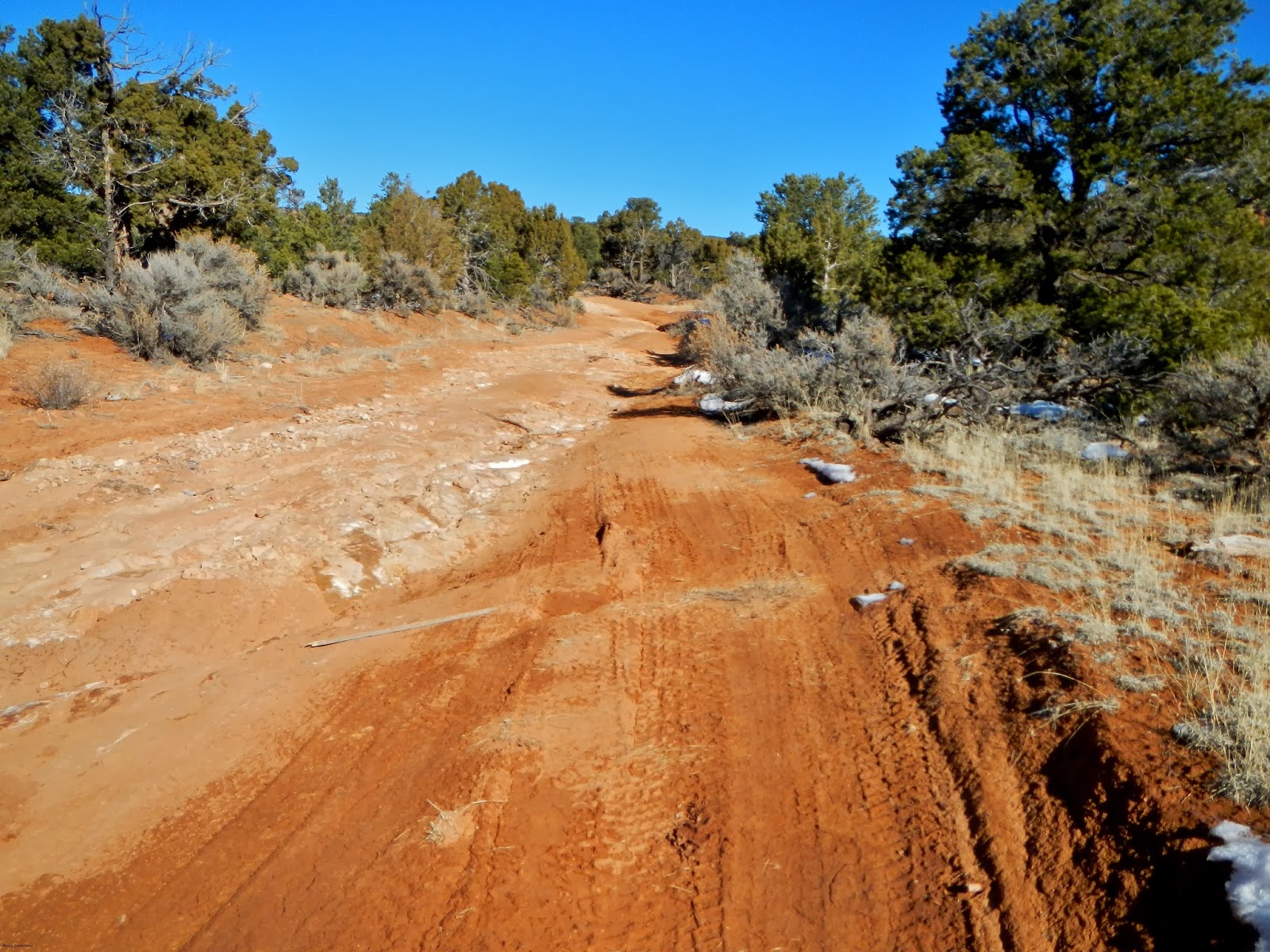 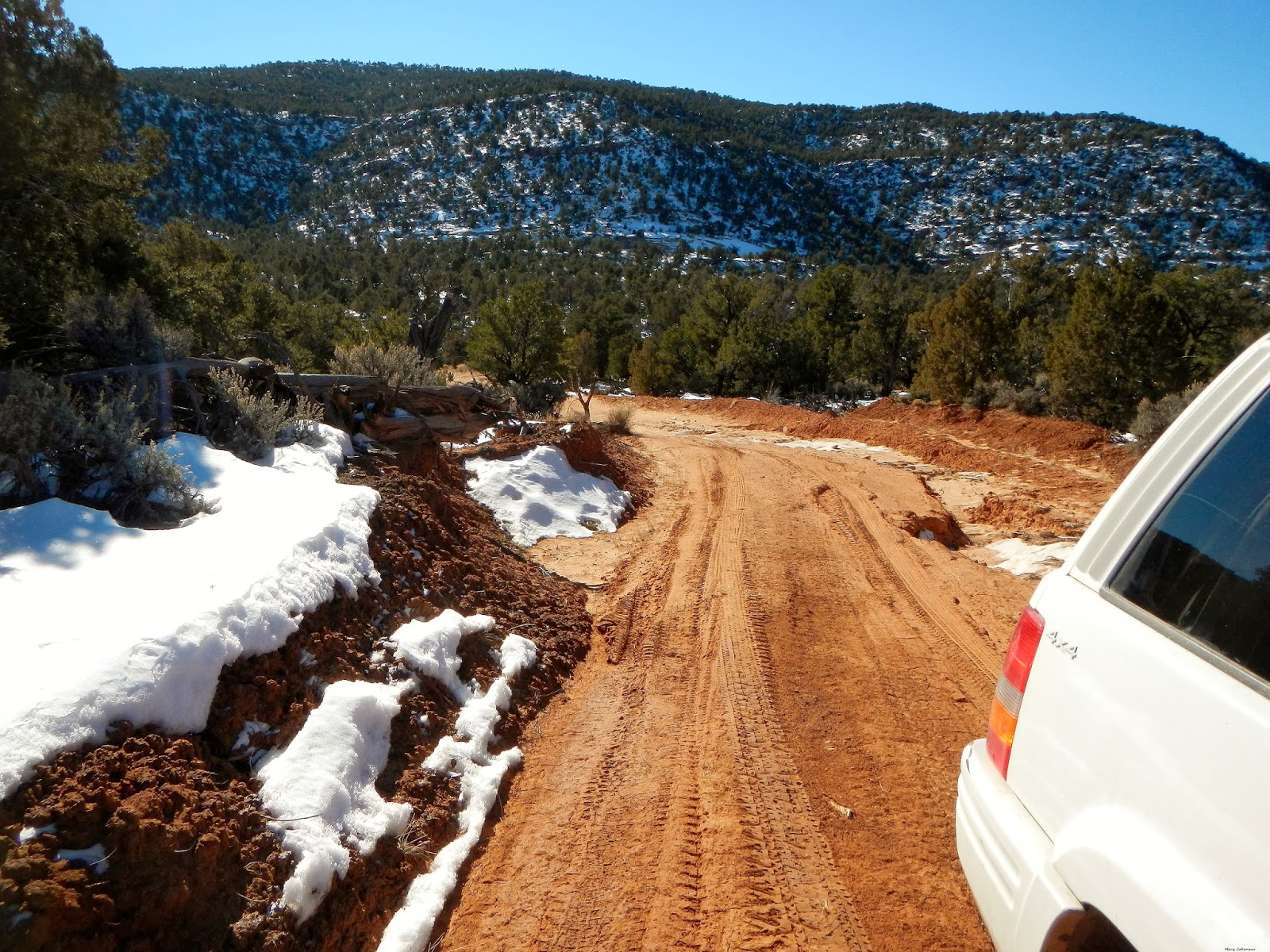 CR 112, continuing straight on, leads upwards to Three Step Hill; as we ascended higher, the road became rockier and is designated "unmaintained" in our 4 wheel drive guide book...in other words, we were rockin' and rollin'.   Snow, with ice underneath, were on the more shaded sections of the road. 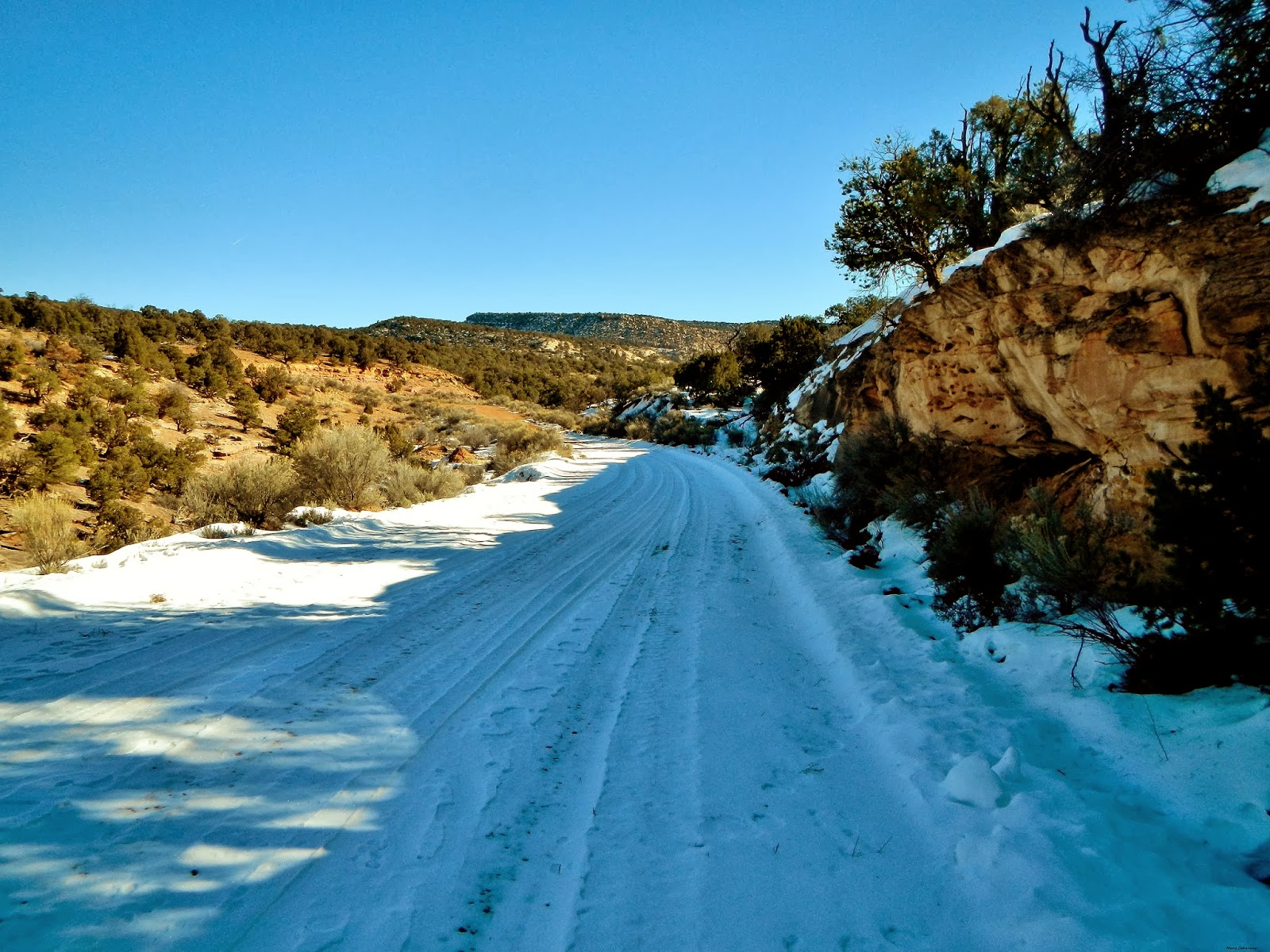 Around one snowy corner, I noticed some caves down in a small canyon area; no ruins were evident inside, but I wanted to document this beautiful area.  Something I noticed immediately though was the scream like calls of a mountain lion; it sounded far away, but I quickly high tailed it back to the SUV anyway.  This was not the first time, nor the last that we would hear these calls on CR 112.  The snow on the road was flattened down and tire marks told us that it had been traveled recently, so onwards we went. 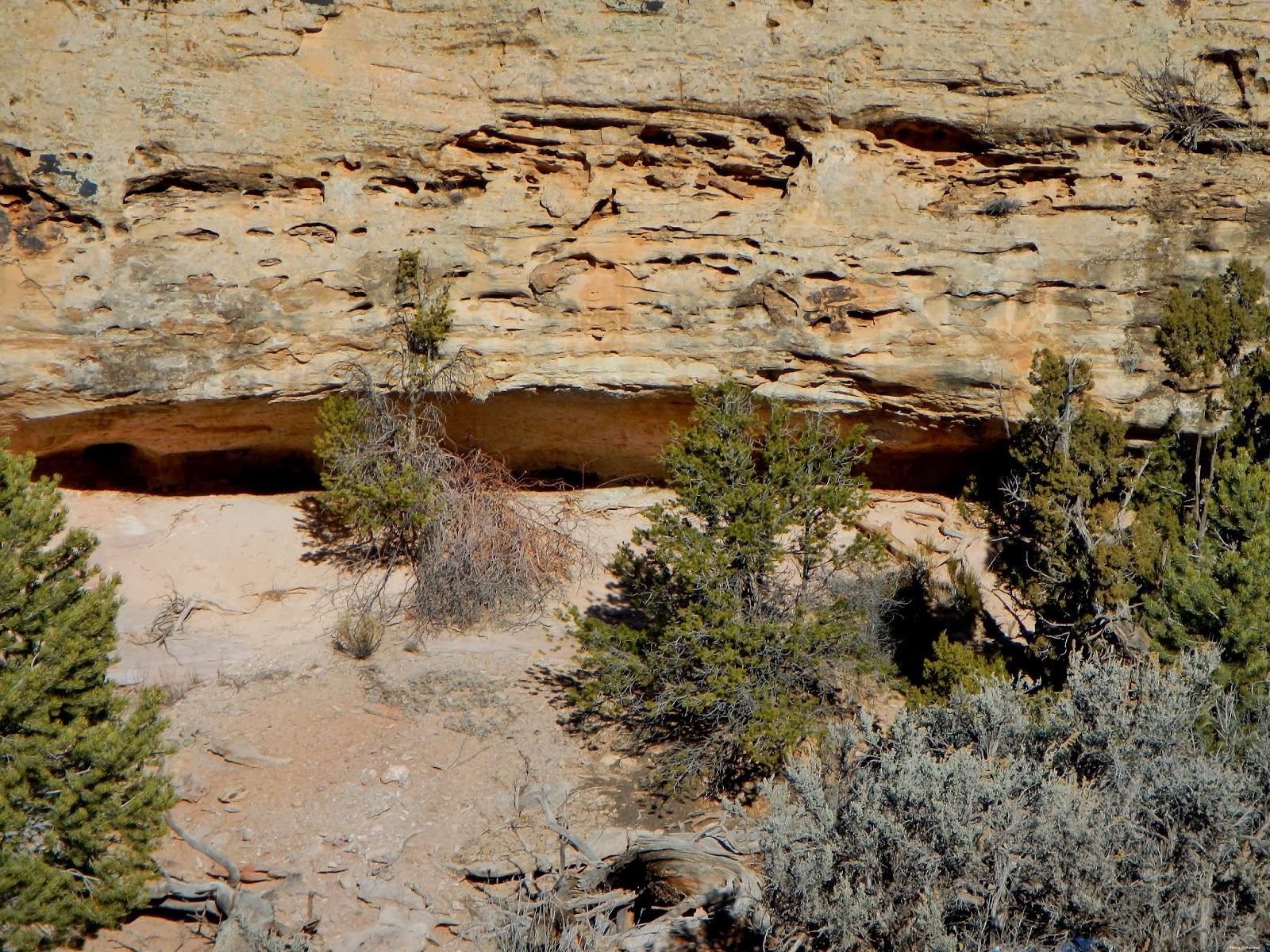 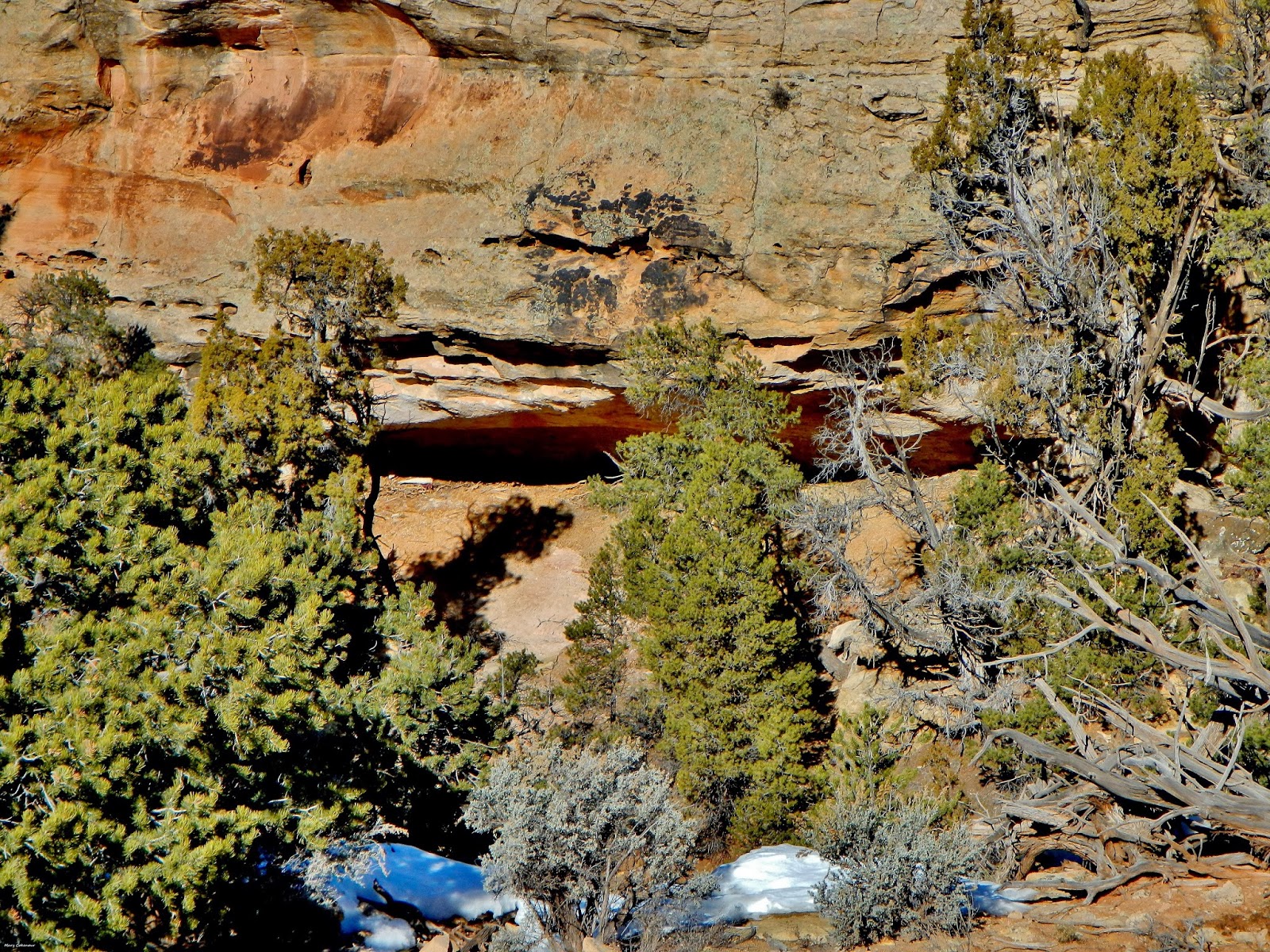 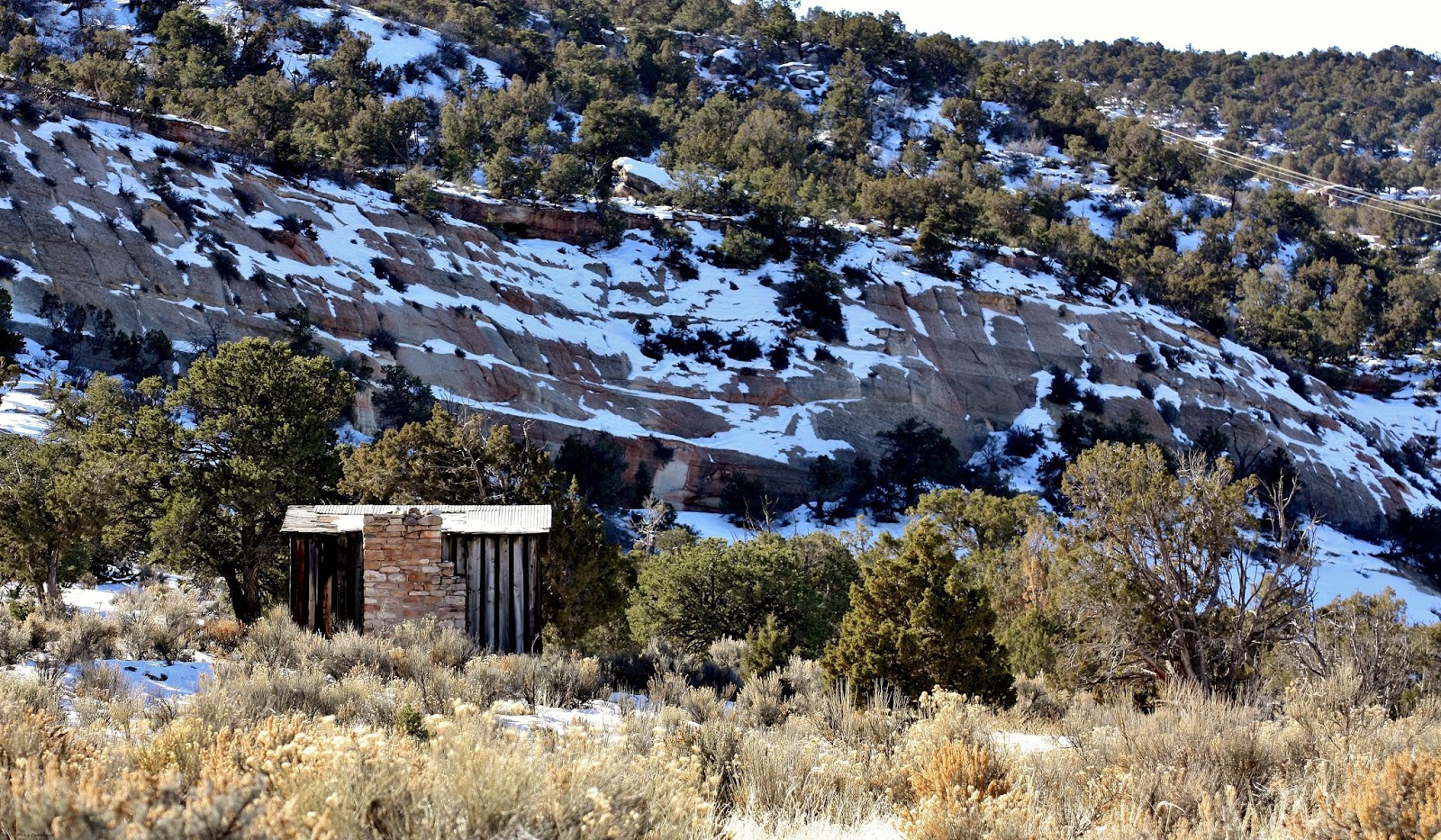 We drove by a small cabin that looked abandoned and in disrepair; the most interesting quality was the stone fireplace. 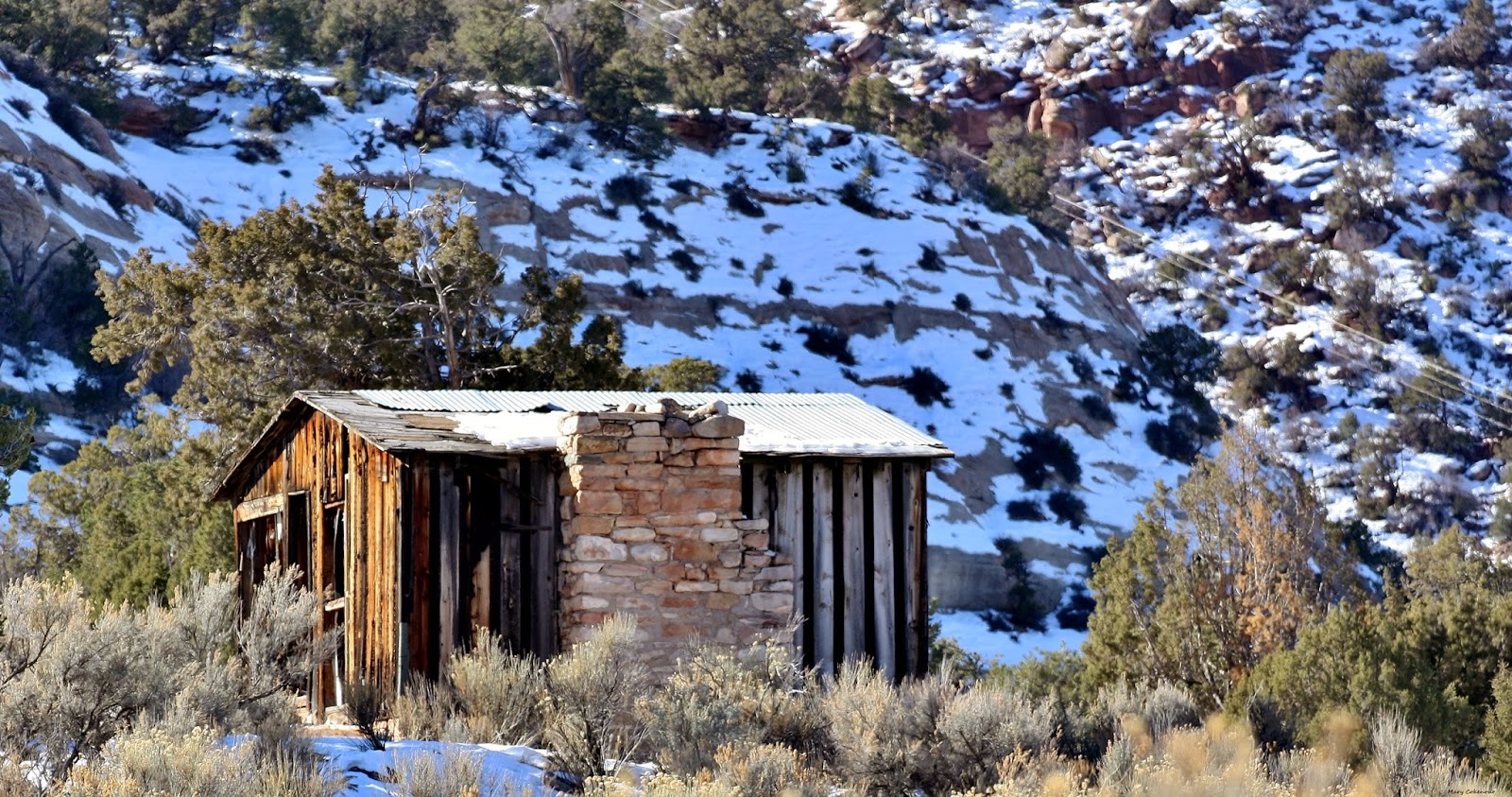 There came a point when the snow became so deep on the road, turning back was our only option; thank goodness we carried a shovel in the rear of the SUV.  That's right, we became stuck and needed to shovel snow out from behind the tires.  Even then, there was no possible place to do a U or 3-point turn; only option was for me to walk down the hill and help direct Roy drive within our original tire tracks.  Now let me tell you, I thought for sure that "the third time" was going to be my unlucky charm.  Earlier in the week, Roy had stepped on my hand as I climbed down into a Kiva, due to his impatience.  Then I slid my left knee along a ledge and took a good layer of skin off; ripped my jeans too, but that was all good because I purchased a new pair and found I had gone down one size.  Now I thought, "great, he's going to run me over".  Well, I finally found a point where tire marks indicated someone else had made a turn around here, so directed Roy to it, we made the turn, and back off the hill we went.  I made sure to take a couple of photos of Lisbon Valley way out in the distance. 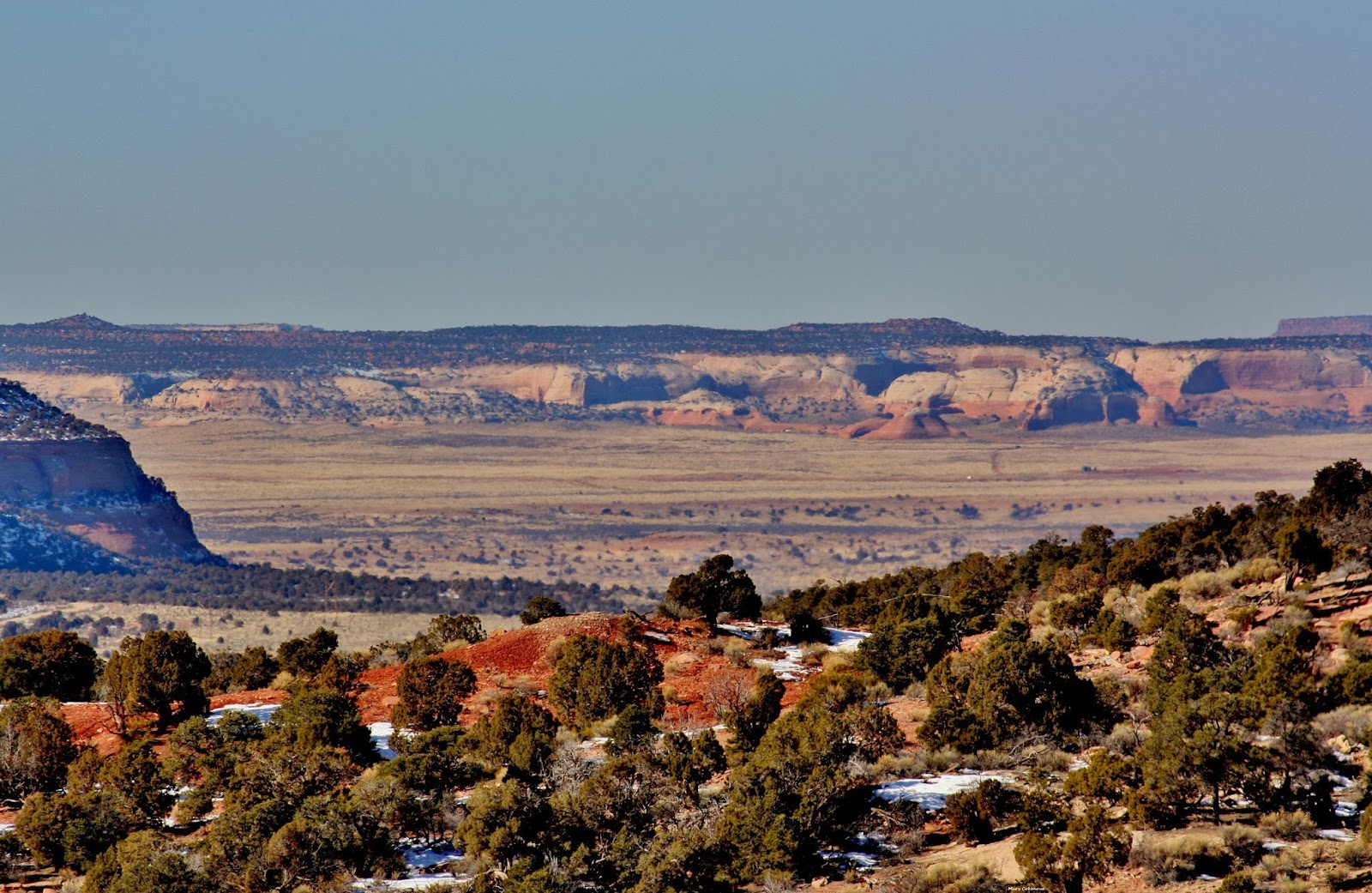 So, after this bit of a harrowing experience, did the intrepid duo head on home with their tails tucked between their legs...hell no!  Heading on back towards Lisbon Valley, we came upon CR 109 - Little Valley Road; we looked at each other and said, "why not!".  The dirt road is narrow and there was a warning sign stating "damage on the road", but we were able to maneuver quite easily and the road quickly changed to a wider, graded gravel road.  We passed interesting formations before coming out to another road where the Lisbon Valley Mining Corporation was located.  We were in familiar territory, so made the right turn to head back to Monticello (left goes to La Sal) and continued down past the mine.

Here we were at CR 324 on Summit Point; all we had to do was make a left turn onto West Summit Road to get back to Route 491 and head on into Monticello; yep, that's all we had to do.  Nope, we headed on straight across to the other side of CR 324, passing by a homestead with a cabin similar to the one up near Three Step Hill and adorned with antlers.  At the very end of this road is Rim Mine and no unauthorized vehicles can continue on past this point. 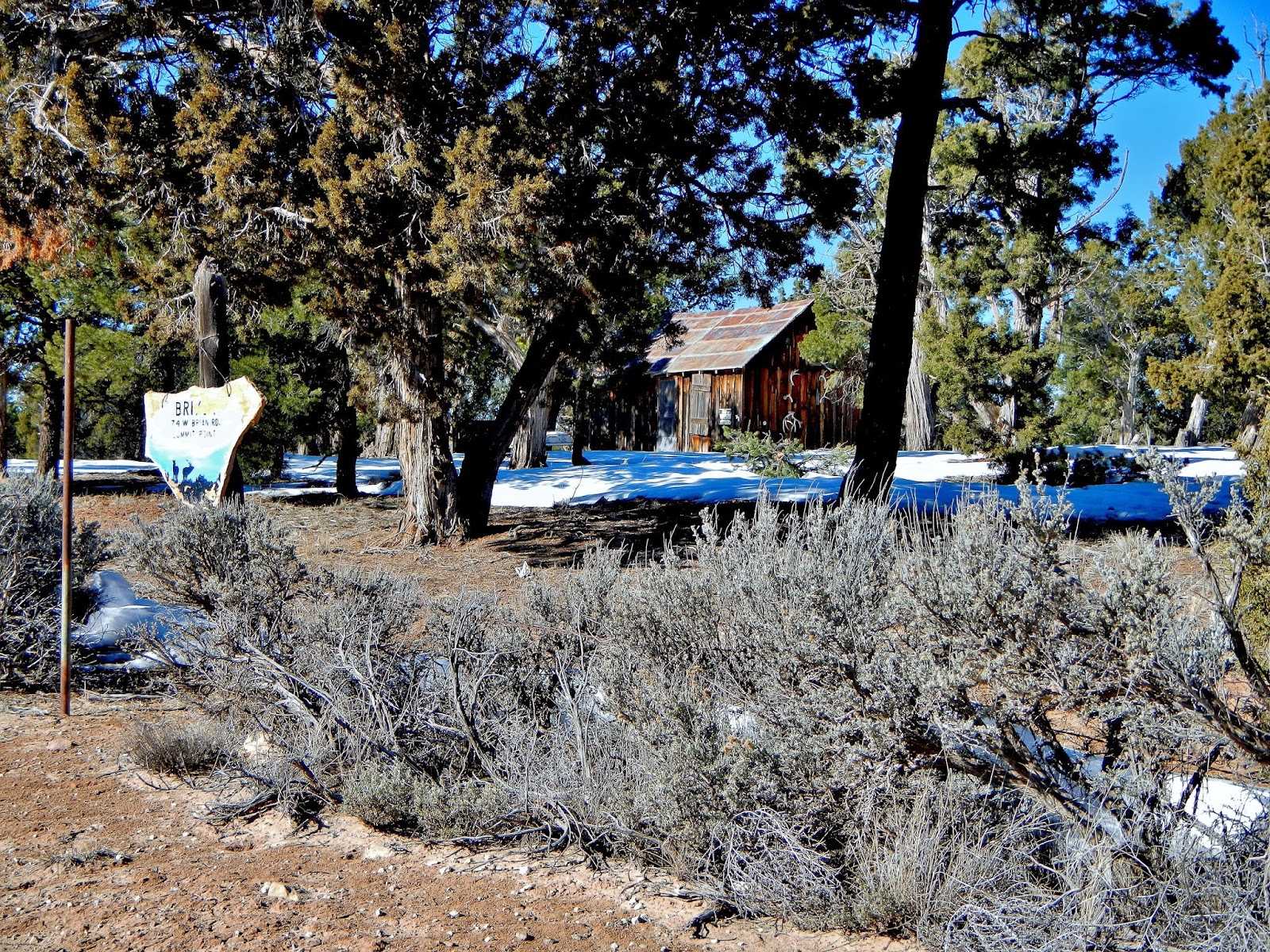 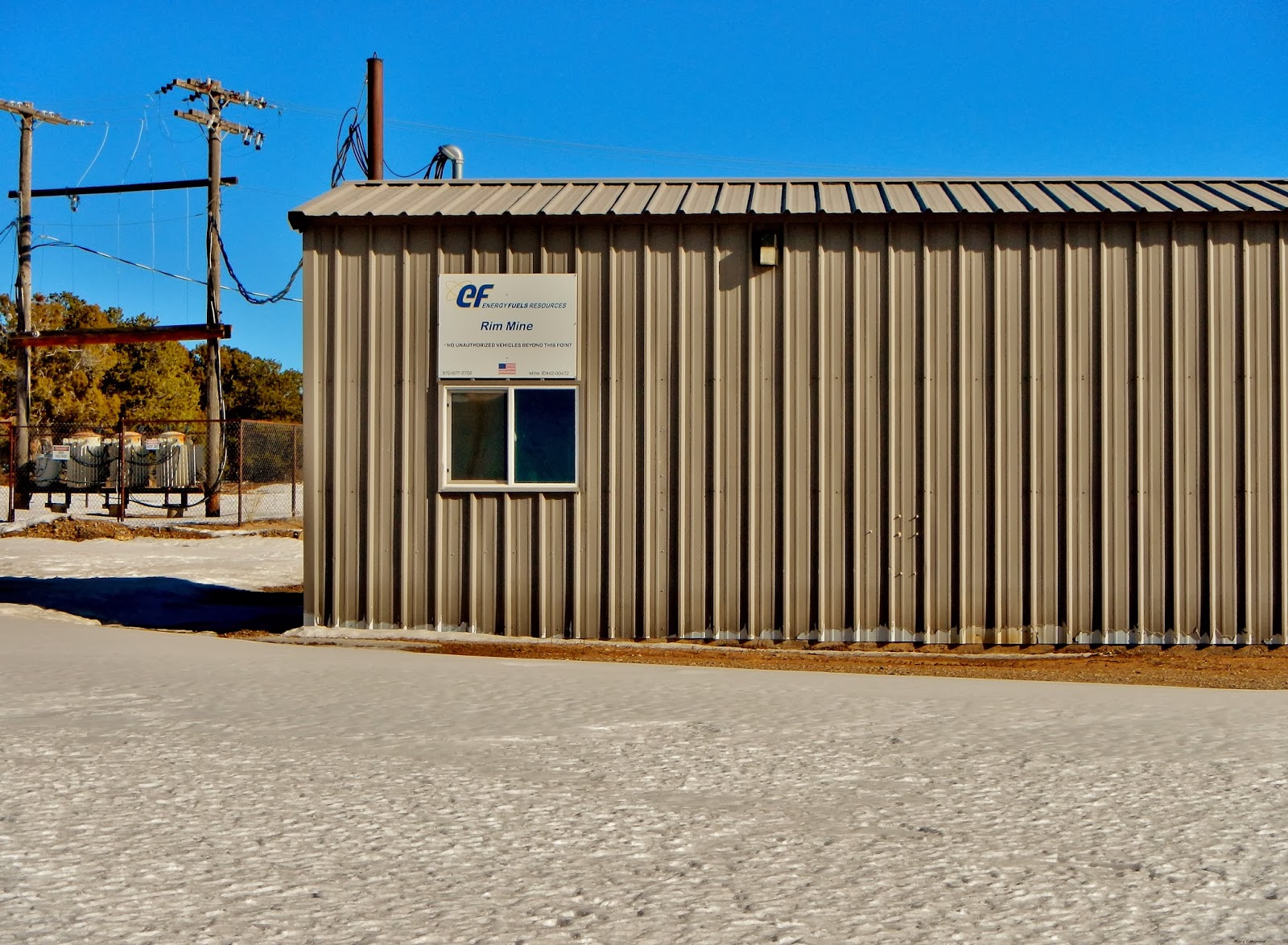 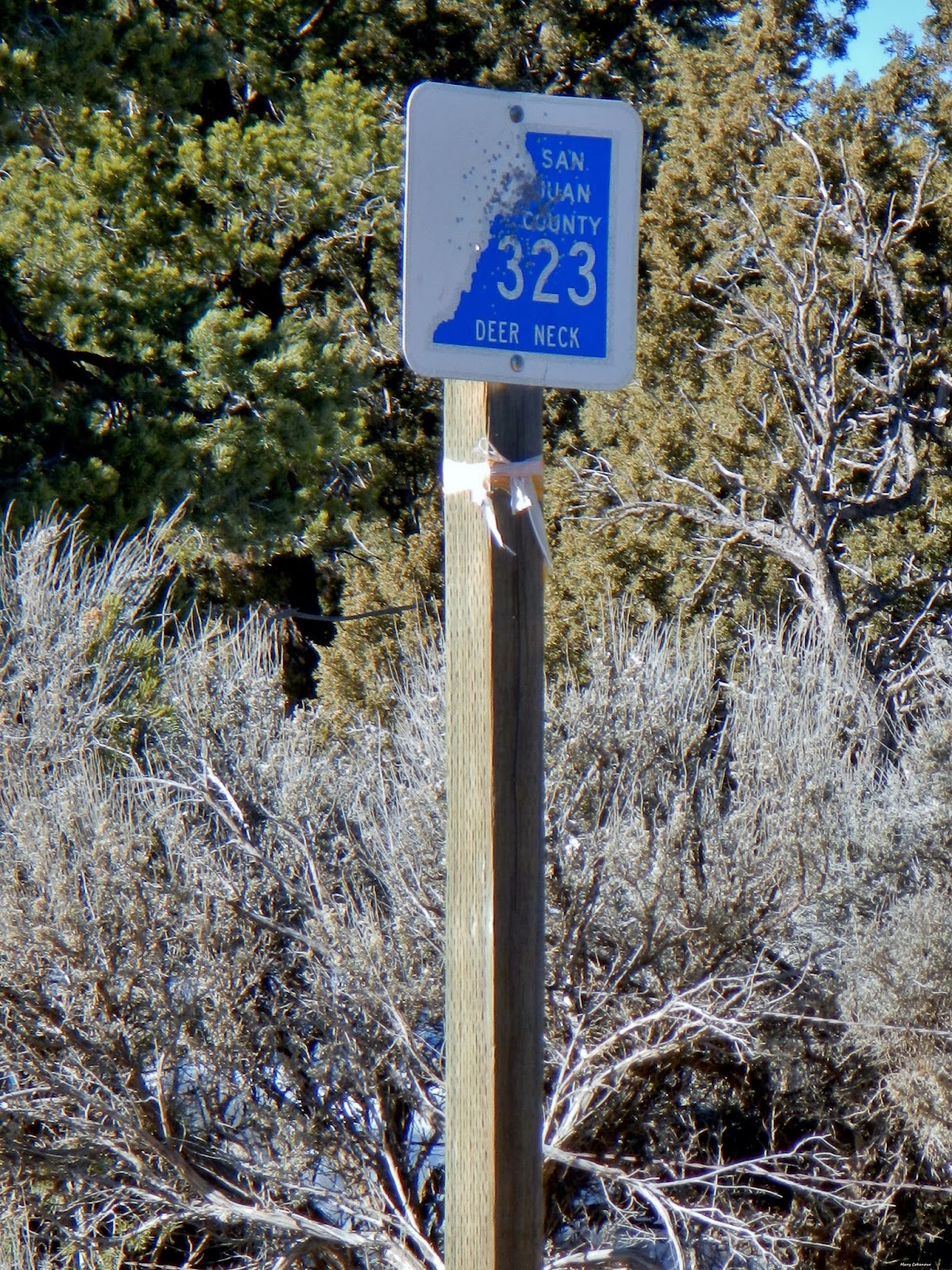 Backtrack to CR 318 and, wait a sec, CR 323 - Deer Neck Road; hey we found the other end of this road that we had first noticed down in Lisbon Valley.  We couldn't get very far though because of snow and we didn't want to get stuck again.  However we noticed a huge compound called "Sunrise Country" which continued up around CR 318.  The only information I could find dealt with a private airstrip used for small, light aircraft; so basically a playground area for the rich. 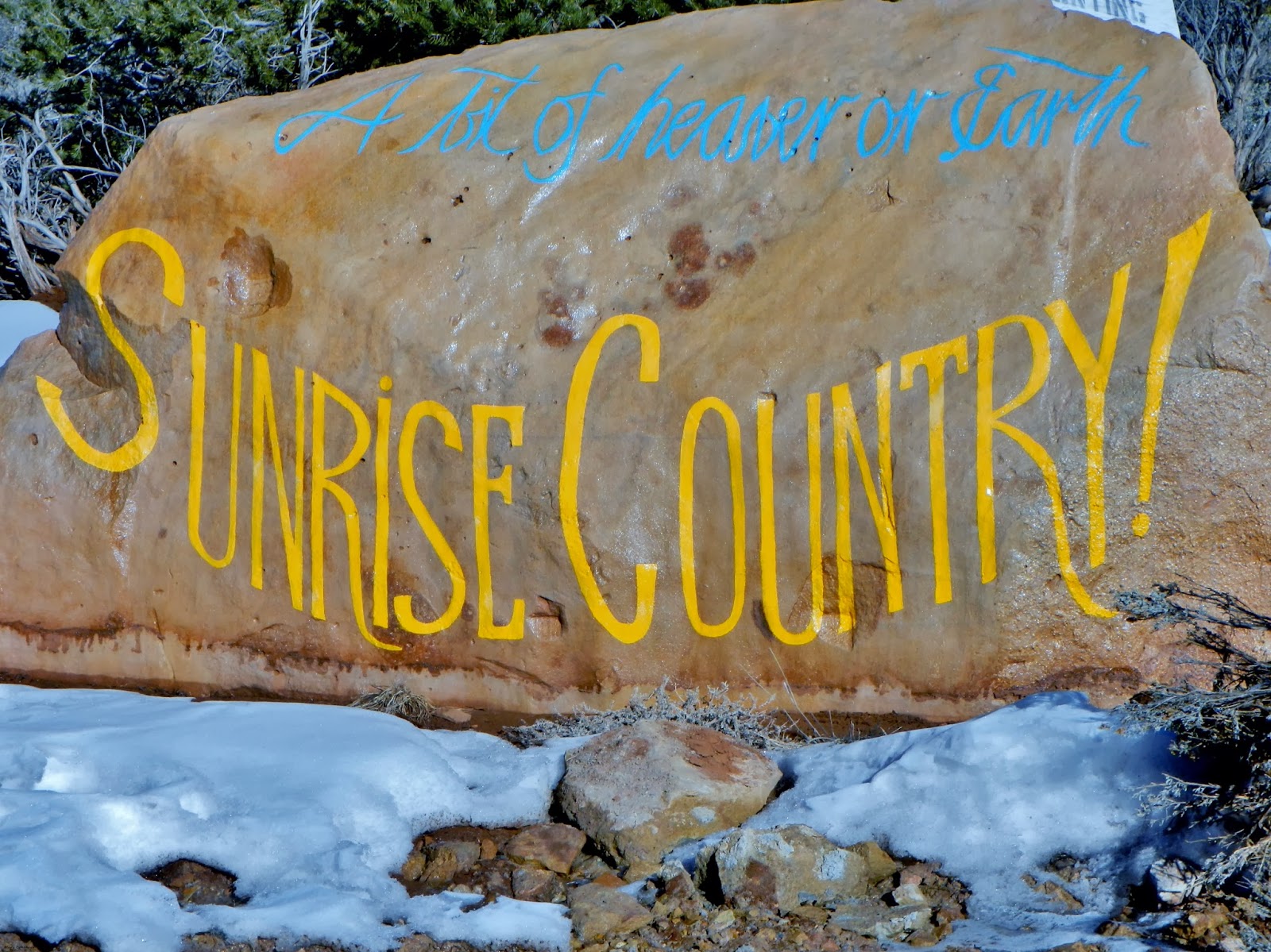 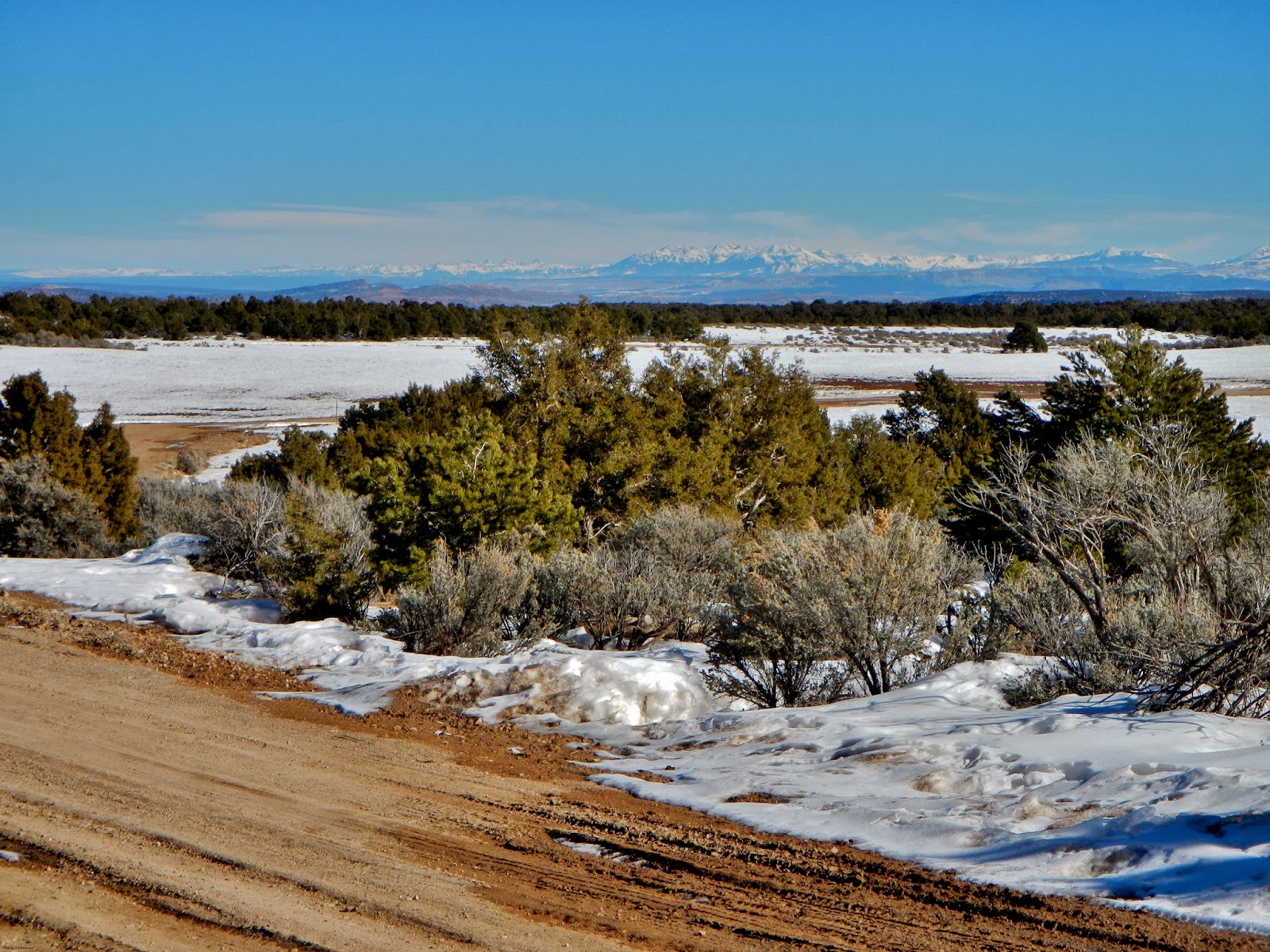 4pm and time to finally head home to a much earned, and well deserved, meal of Rib Eye Steaks with sautéed mushrooms and onions and baked sweet potatoes with cinnamon, brown sugar and melted butter. Oh yeah, that was a great meal; every precious mouthful of it.

Now in case you were having a little trouble keeping up with all the roads I've mentioned, here are two maps to help guide you along. 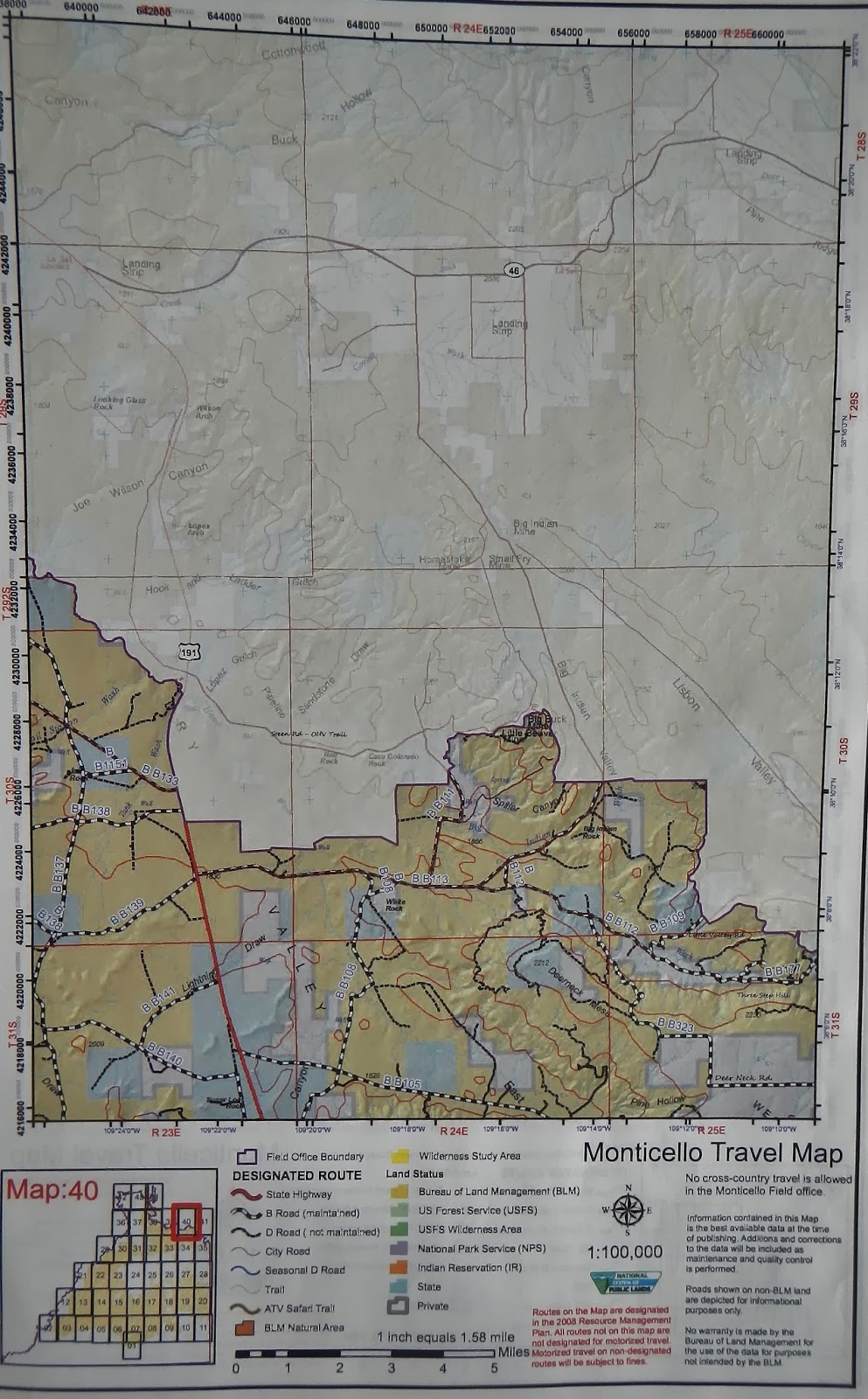 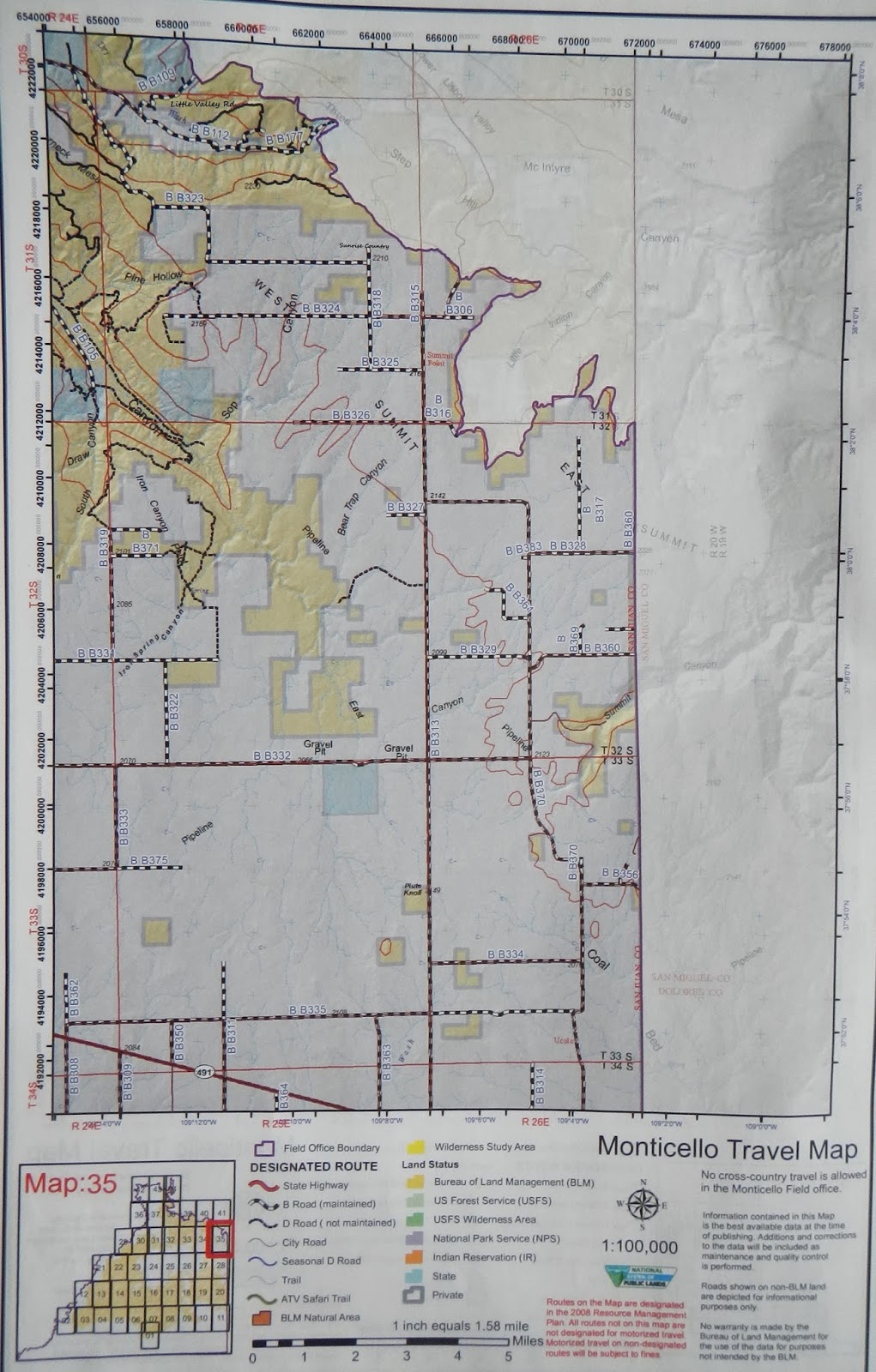 There you go, bored?  Now you have information about a drive that will take you most of the day, give you sites to see, and one heck of an adventure.  Remember, you have that great meal waiting for you at the end of it all.
Mary Cokenour﻿
Posted by Mary Cokenour at 12:48 PM