Islands in the Sky - Part Three.

Well here we are, the third section of Islands in the Sky. You know, even though we were there in September 2013, going through all the photos (there were over 400) enabled me to relive every moment of the time we spent at the Park. All the scents in the air; the sounds; feel of sun, wind, sand, rock; the sites that made my eyes whirl in delight; it all came together to create one spectacular event in my mind...a memory not to be forgotten.


We traveled south towards the first Overlook - Candlestick Tower; this formation was along the way and try as hard as I could, I find no mention of it in any Canyonlands related material; nor any other photo taken by another visitor.  It is a tall rectangular tower, so until I find another name for it, lets simply call it Islands in the Sky's version of "Chimney Rock". 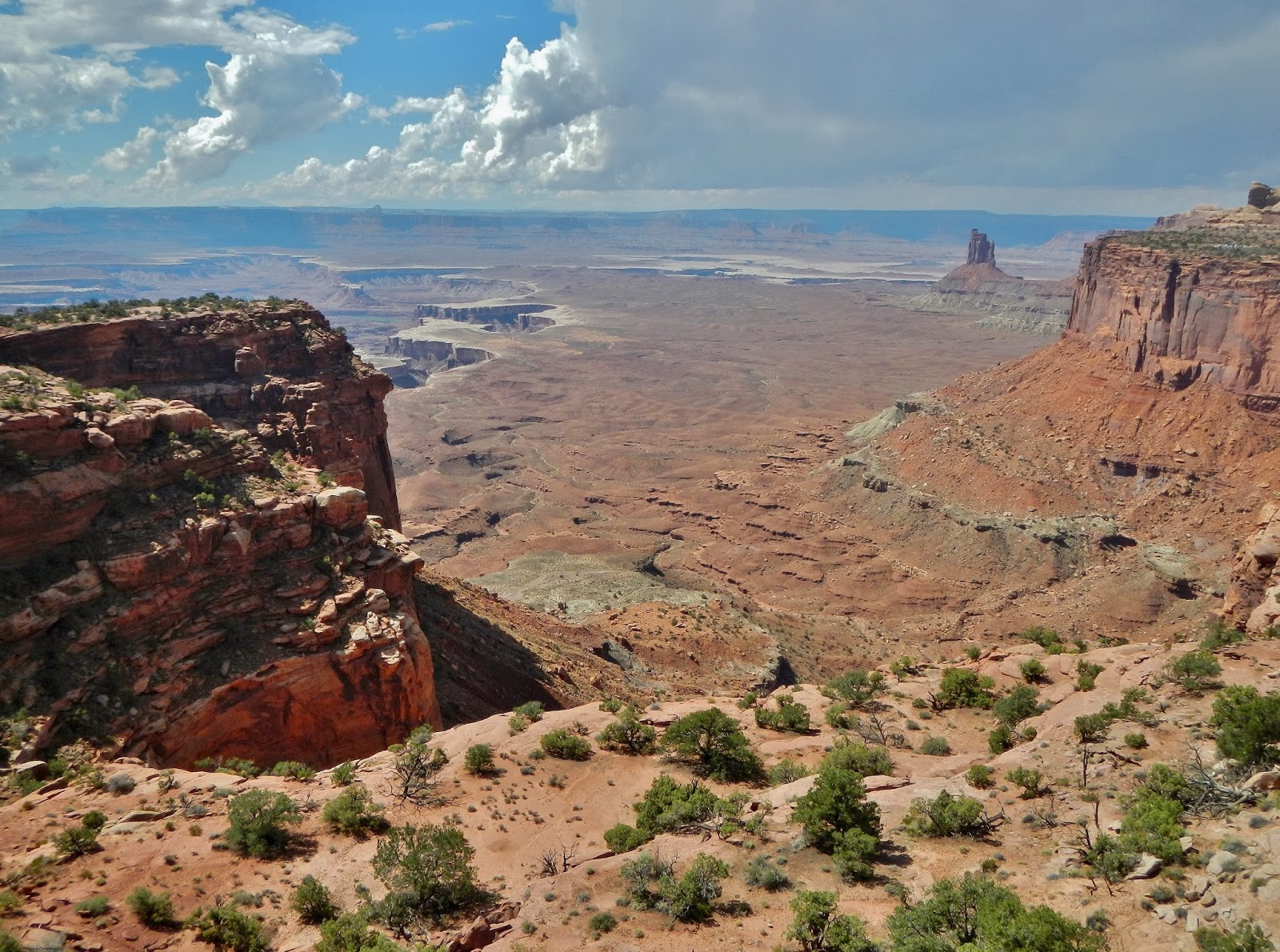 Like the other Overlooks, Candlestick Tower is breath taking; Soda Springs Basin directly beneath while the White Rim stretches across the background.  This desert tower is ahead and to the right; distinct pinnacles creating the illusion of a grouping of elegant tapers.  Directly to your right is another unusual formation; again I cannot find any mention of it in Canyonlands related material, nor another photo.  I have given this formation the name of "Candle Stubs"; seems to fit it well considering the close location to Candlestick Tower.  Walking the area is over rock and sand; there is a ledge that can be traversed which will allow you to climb up onto some slickrock and then loop around to the main viewing again.  The ledge does get narrow at one point, so your body will be hugging the stone wall behind you. 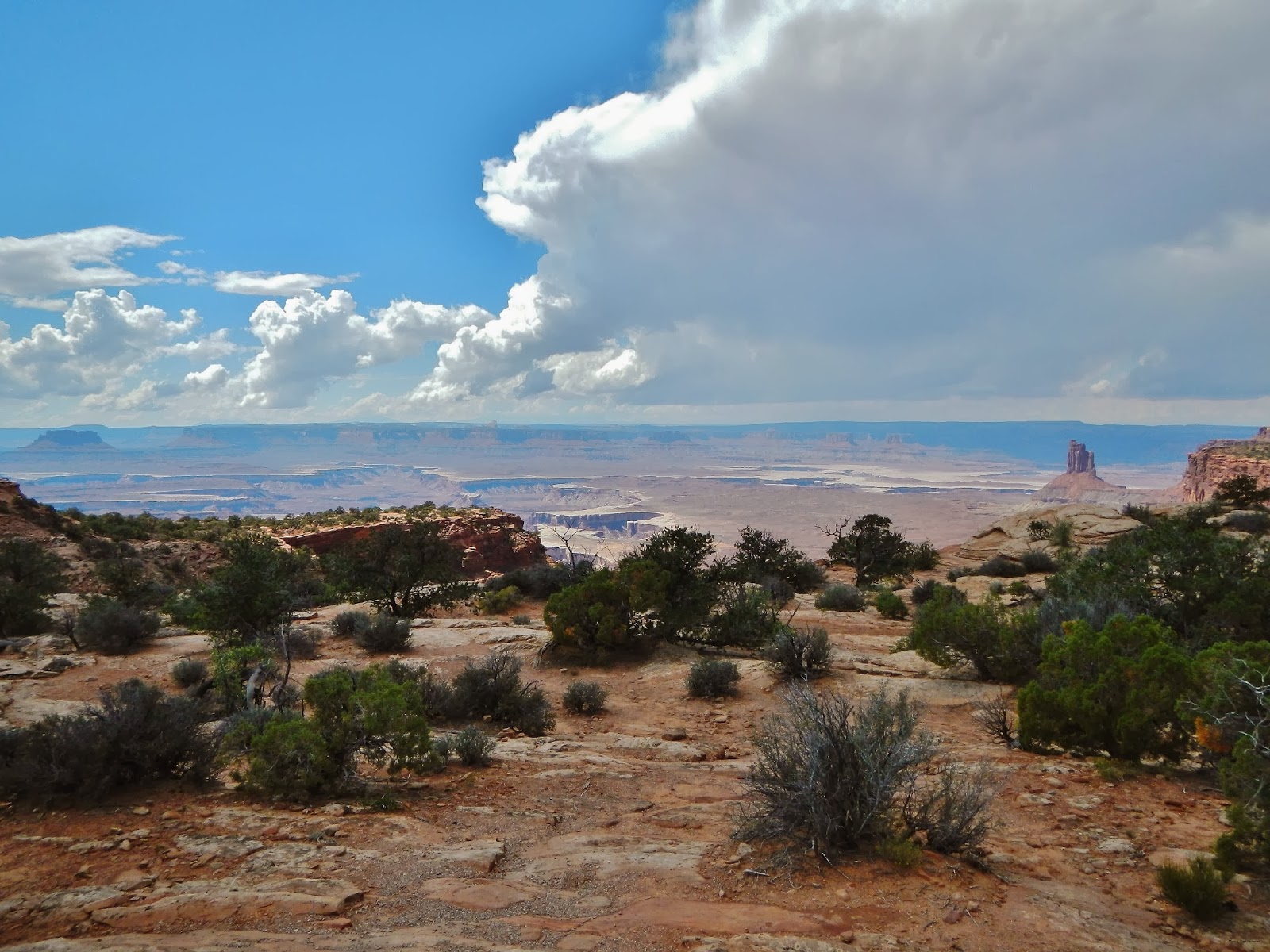 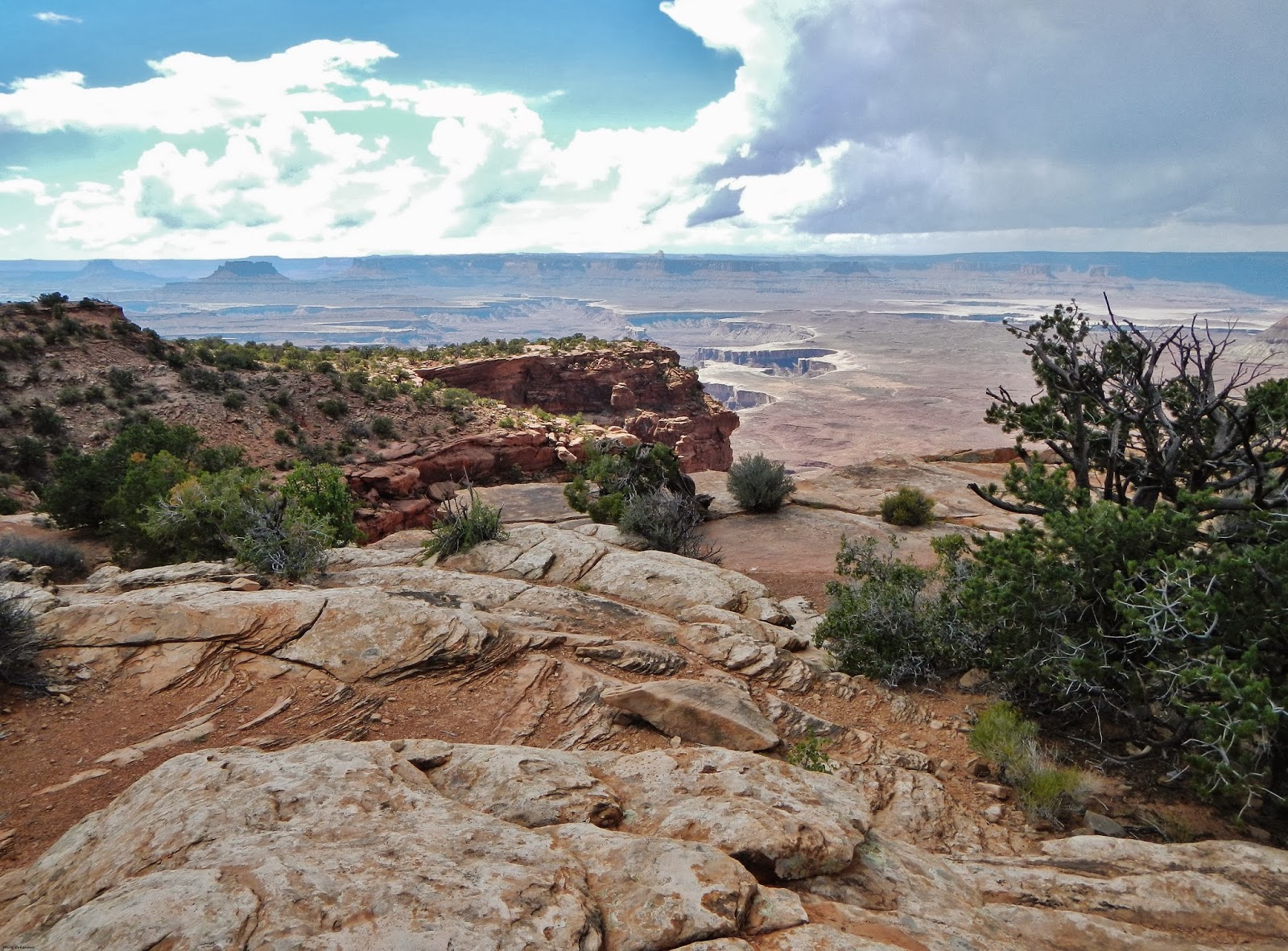 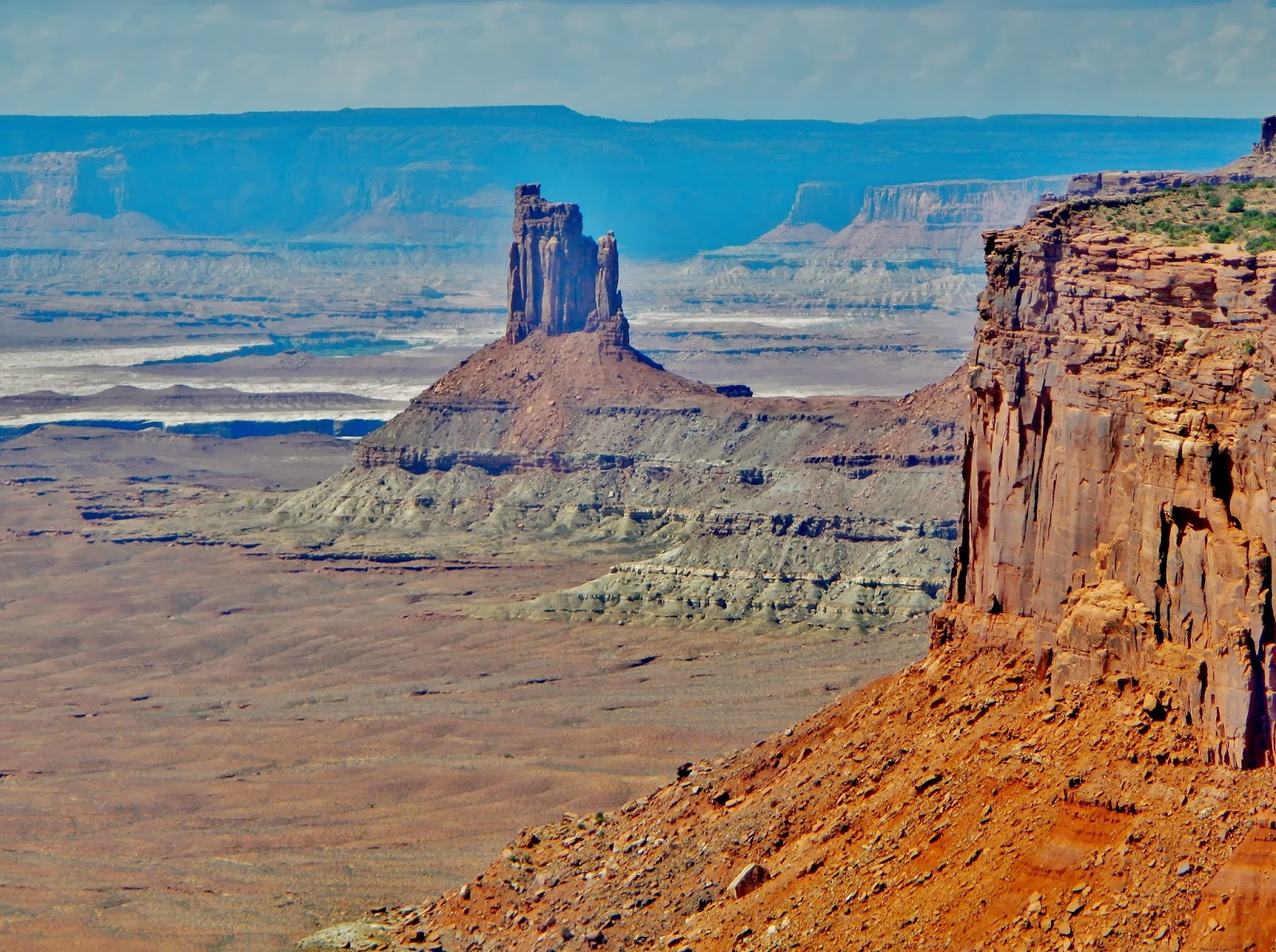 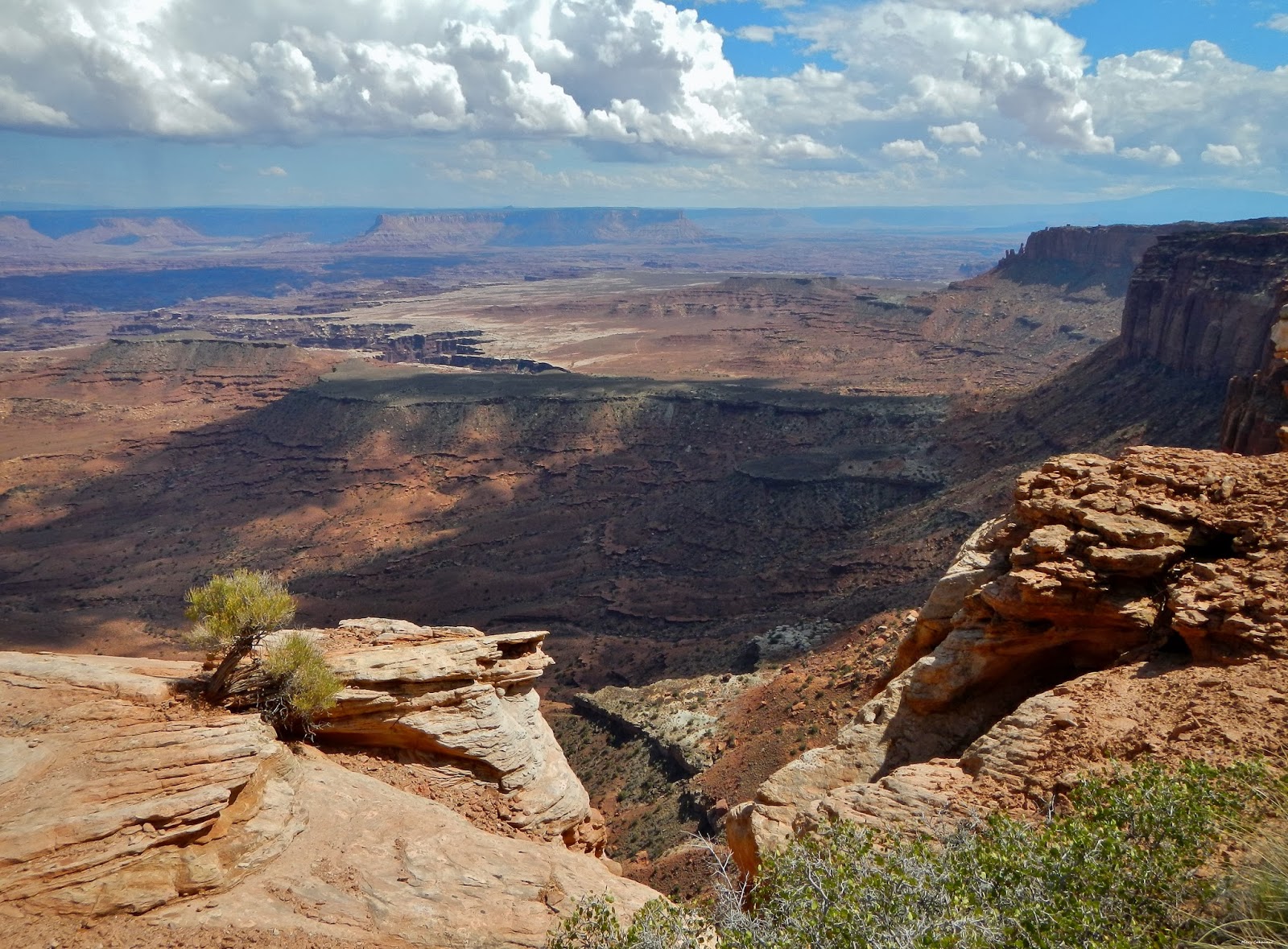 Buck Canyon and Orange Cliffs Overlooks are one long stretch that reaches into the Grand View Point Overlook; Buck Canyon can also be seen from Mesa Arch and the Orange Cliffs overlook Gooseberry Canyon.  Between the grazing of cattle and the mining for ore, the canyons below have become pretty much wastelands; hiking in the area is limited as it is hoped that revegetation will eventually take a strong foot hold, or maybe not. 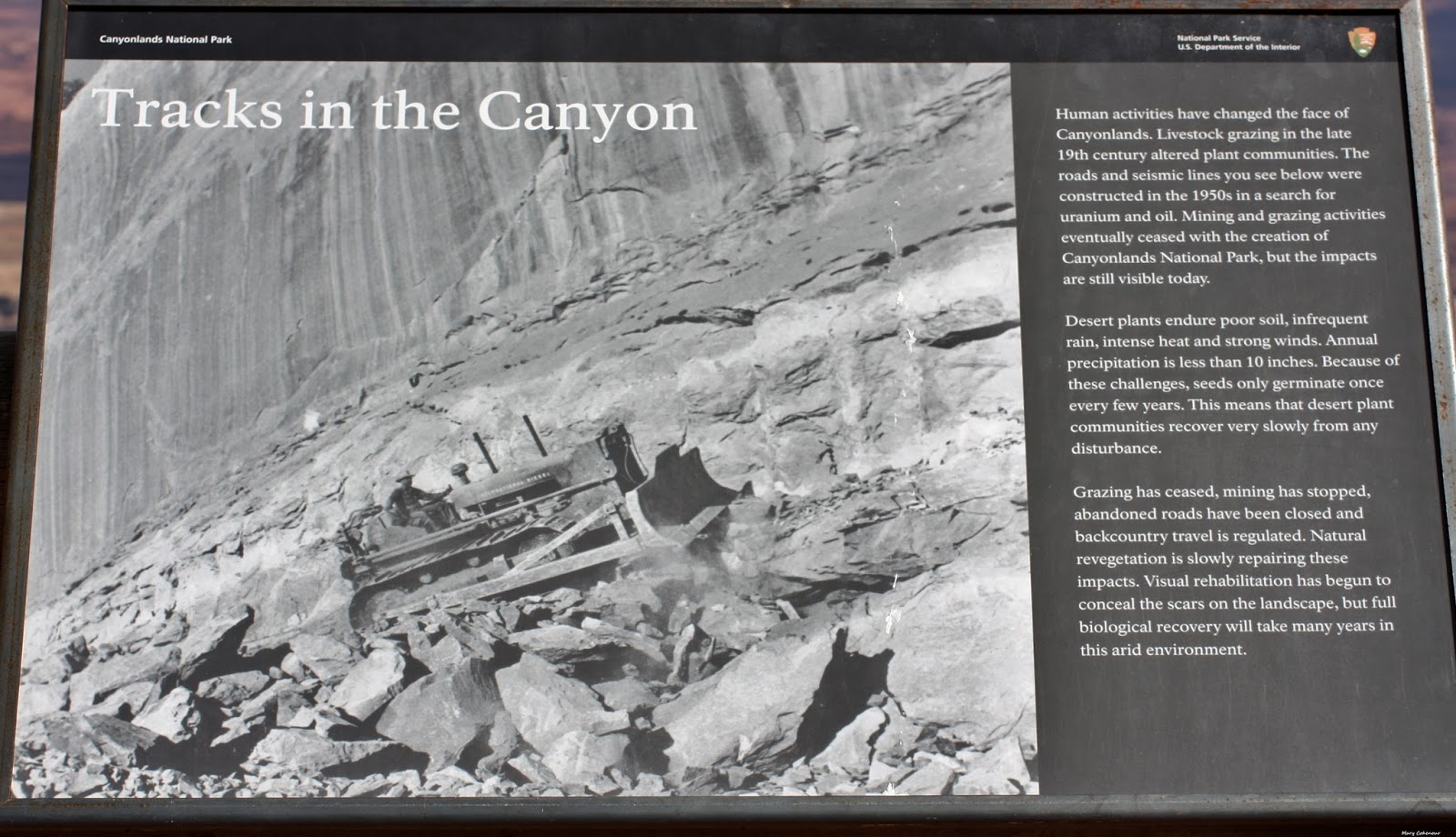 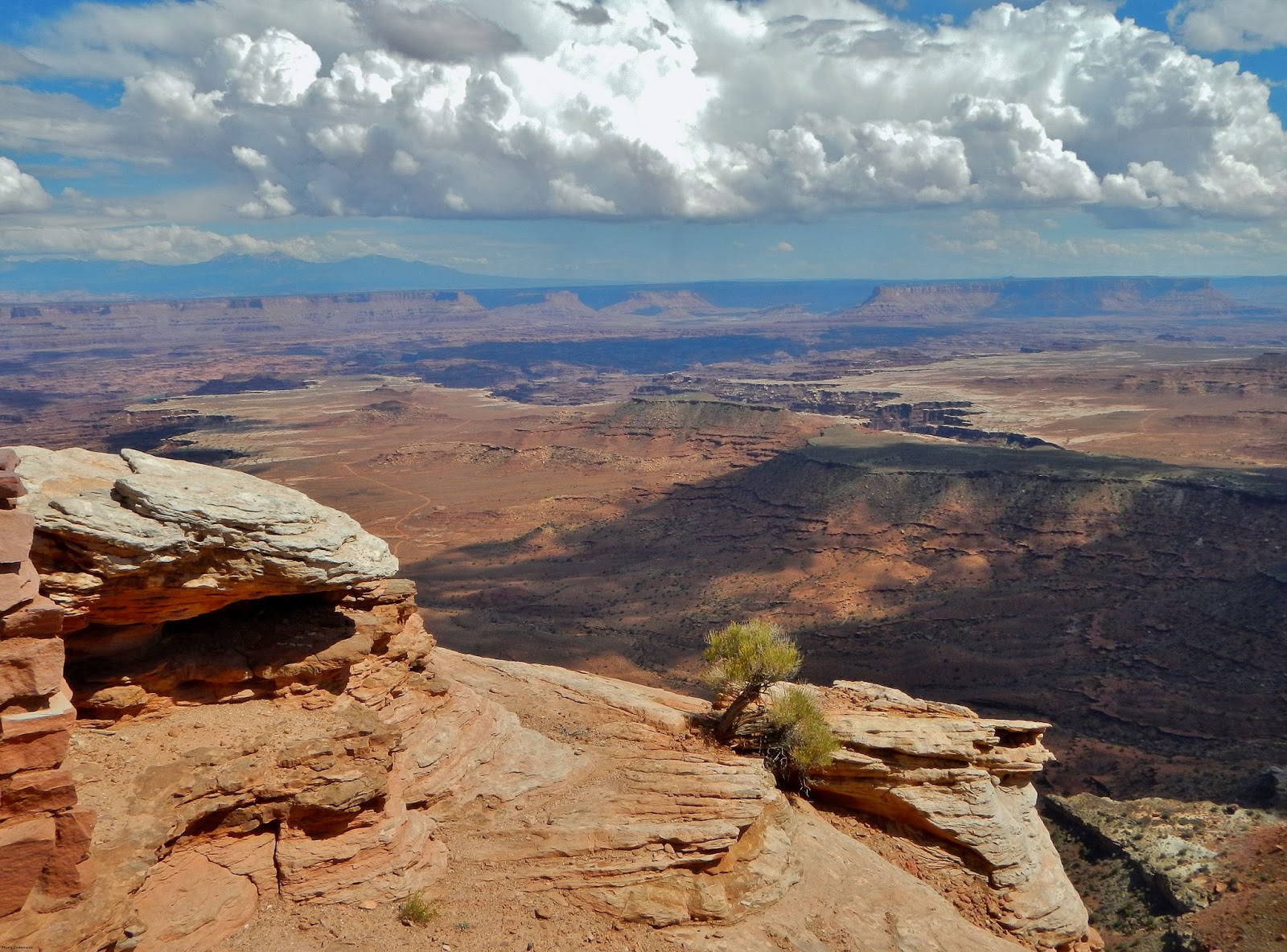 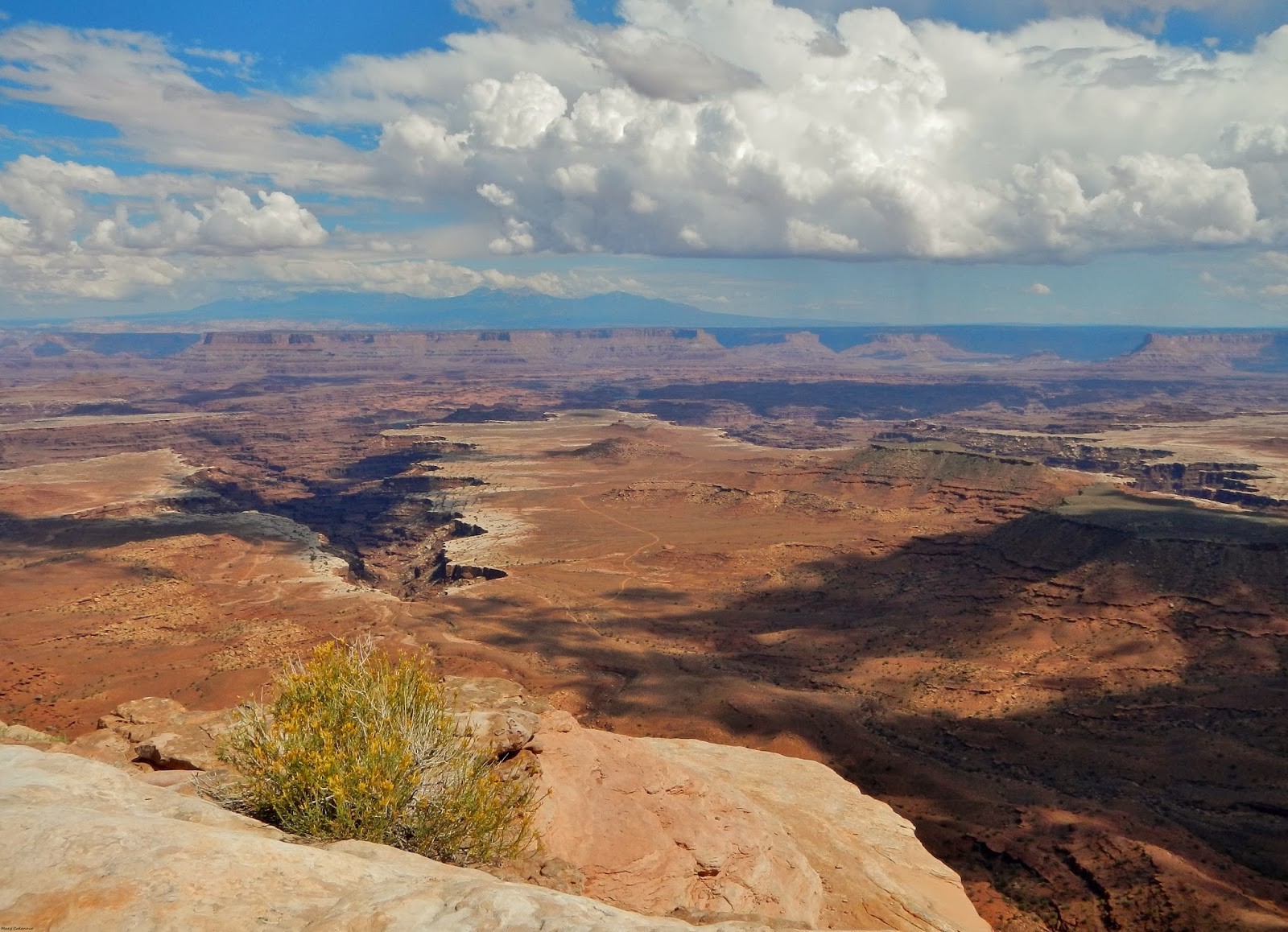 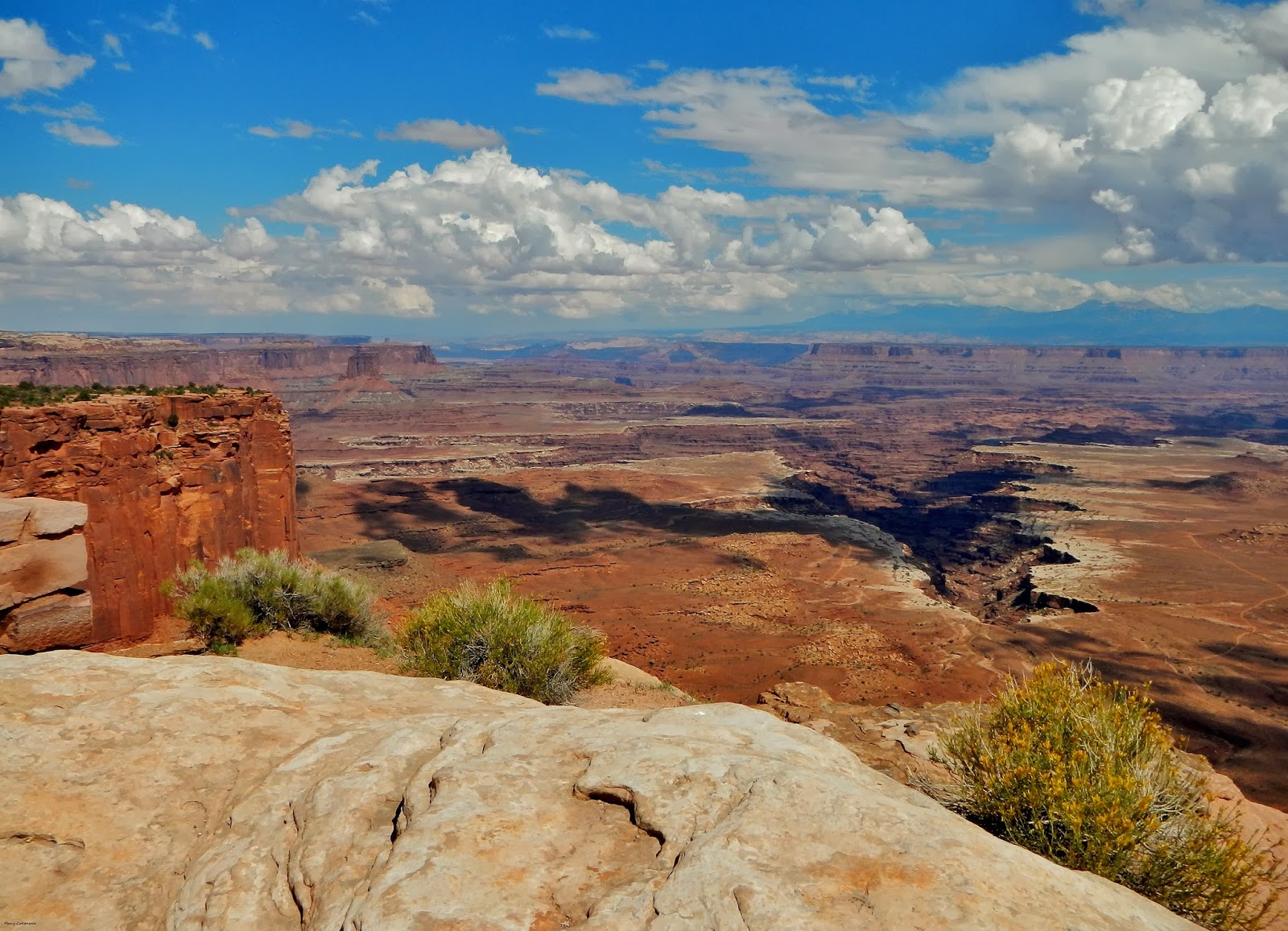 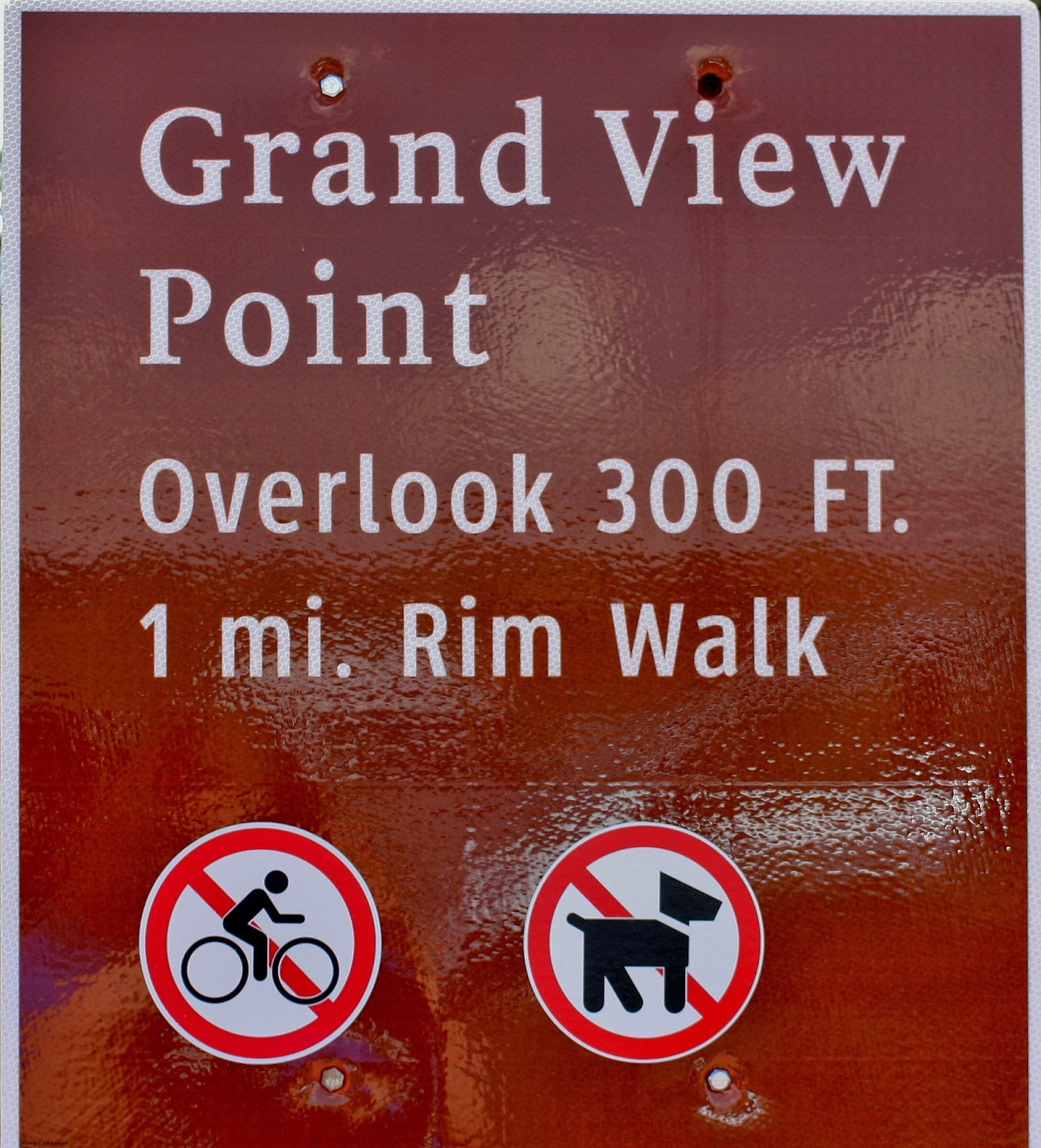 In the photo above of the "Edge of the Orange Cliffs", you are seeing into Monument Basin which Grand View Point overlooks.  In the cracks and crevices of the intricate canyons, stone pinnacles act as monuments to the gods; another aspect is that they look similar to the Terra Cotta Warriors waiting to do battle for their ruler.  It's all in the way you want to look at it and look you will; finding it quite difficult to simply stand still and not walk the entire boundary of this Overlook.  Caution: there are no guardrails, no low stone walls to keep you from stepping over the edge. 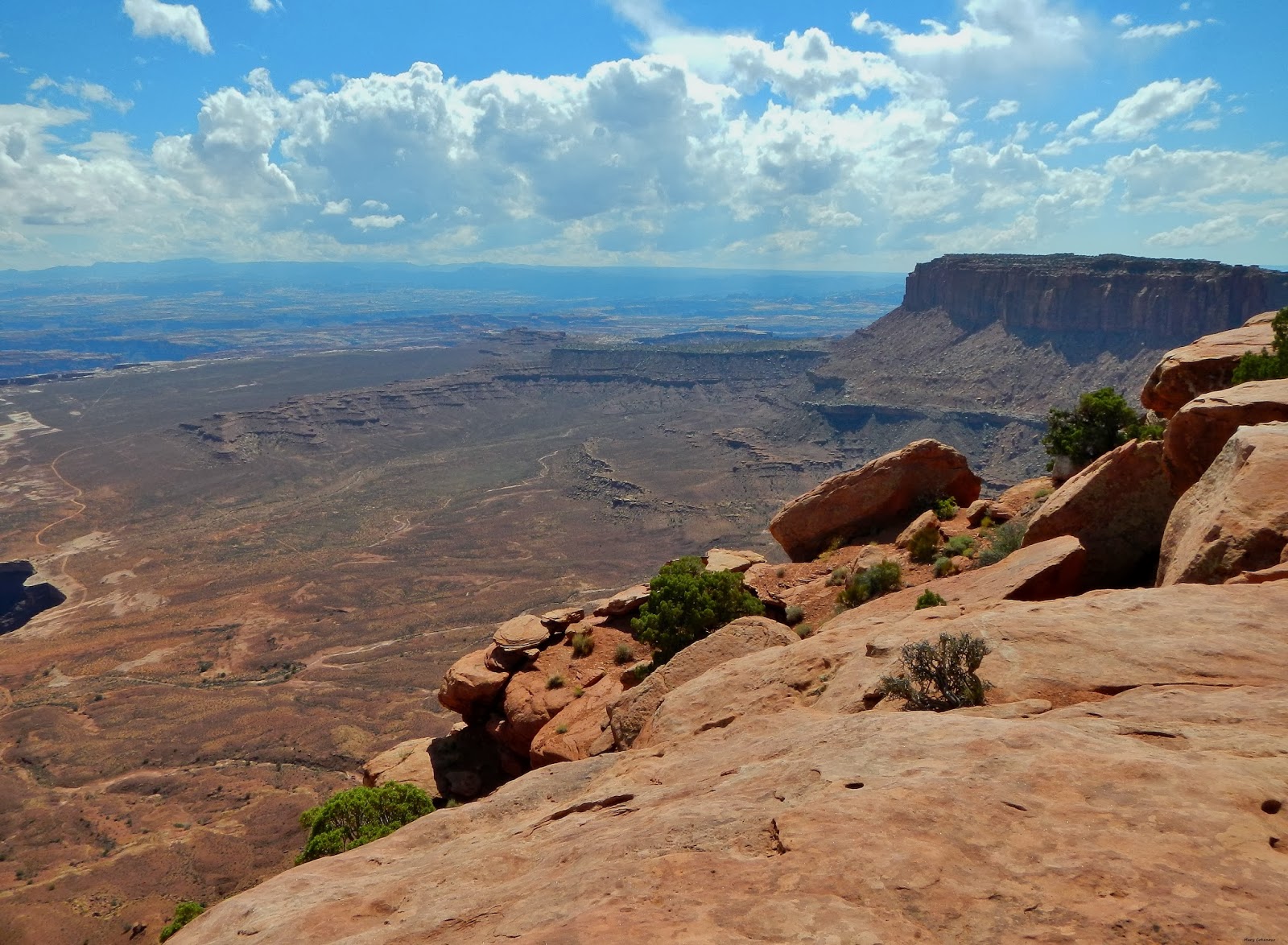 When the first raindrops began to fall, it was time to head on home to Monticello; it was one of the typical "quickie" storms, but this time it left a surprise....a double rainbow.  Now was there a pot of gold at the end of each one?  Or was it a trick; one rainbow led to the gold and one led to a new adventure...now this was going to be a truly difficult choice to make. 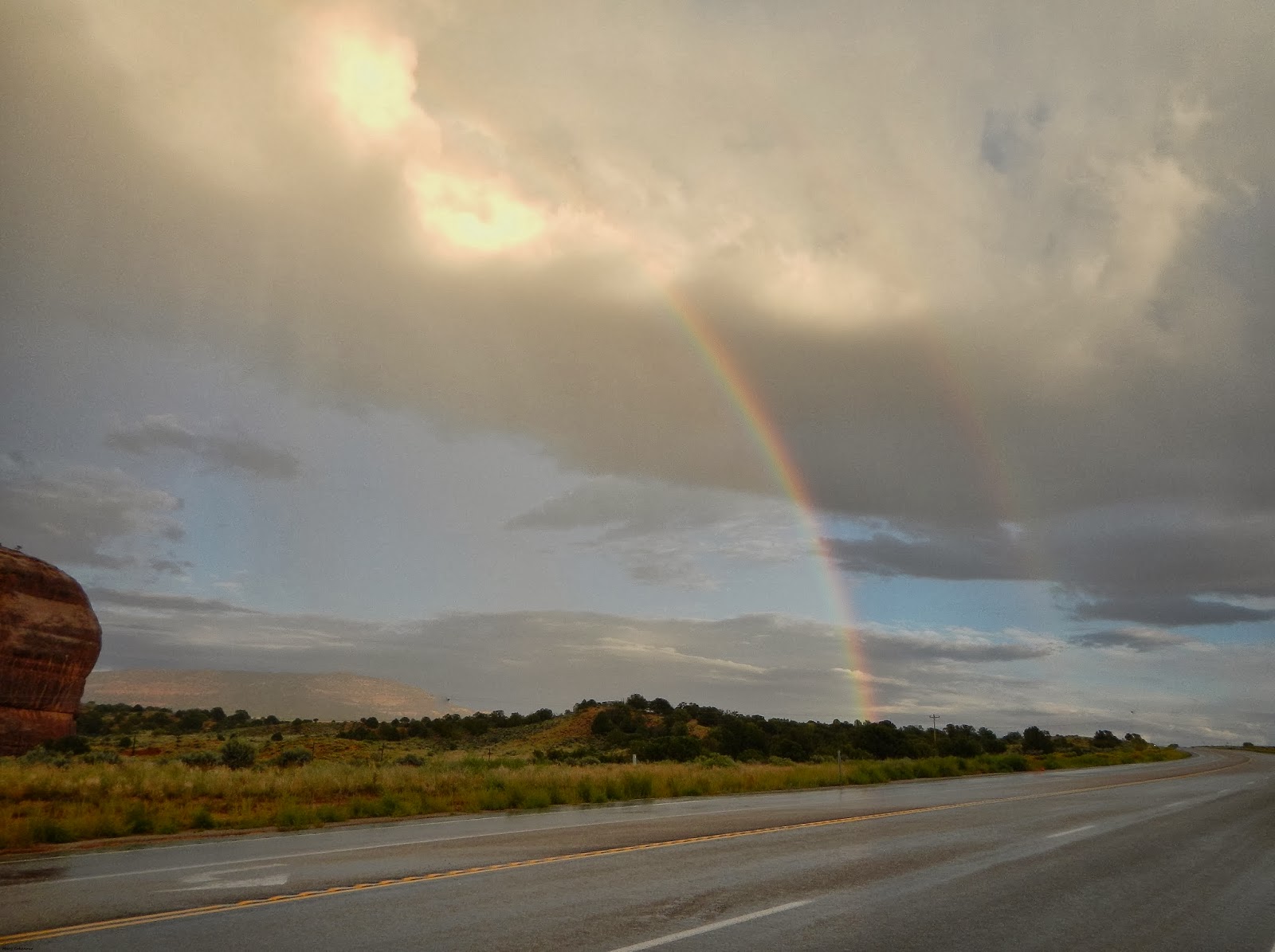