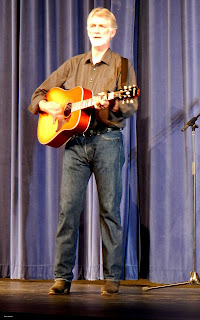 7pm, seats have been found;  happy chattering between rows…the lights of the auditorium dim and a voice is heard from behind the stage.  “Here I lay, at night, watching the stars on fire...” and out strolls Stan Bronson, singing the title song from his first album, “Down From the Mountain”.  The audience erupts with hoots, hollers and hand clapping; Stan Bronson is a much loved son of San Juan County. 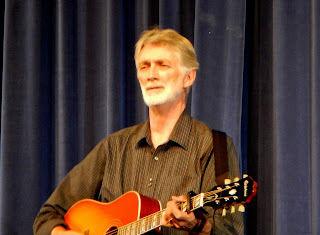 Now as Stan explained it, this was the 50th anniversary of the album being recorded and sold to the masses.  However, it was actually in 1965, a 51st anniversary of his first concert at San Juan High; 1200 audience members, including Albert R. Lyman himself.  Stan's aunt, Cleone Bronson Cooper, offered to pay recording expenses if he would record his folk songs "for the sake of history"; smart woman!  Now while I could recap Stan’s entire history in this article; a great write up already exists at his website: http://worldmusicplace.sharepoint.com/Pages/AboutStan.aspx or http://www.stanbronson.com


In between lyrics, or between songs, Stan would give joking comments and the audience would wholeheartedly laugh.  He reminded us of the stories behind the lyrics; events that actually took place in San Juan’s historic past, or slightly embellished.  For the song, “Posey”, two women and a young child, from White Mesa, came up on stage to sing with Stan.  The oldest of the women was the granddaughter of Posey himself!  With many songs, the audience sang along; sometimes tears were wiped from eyes as the words hit the heart.  I must admit, I’ve listened to Stan’s albums, love the songs, and wiped a few tears myself as I knew the stories well from my travel blog research.  Strange coming from a woman who believes that listening to heavy metal music is relaxing.  Requests were asked for, and I gladly yelled out, “Cowboys, Indians and Mormons” which he played, along with “Navajo Eyes”, “The Hunter” and a few more. 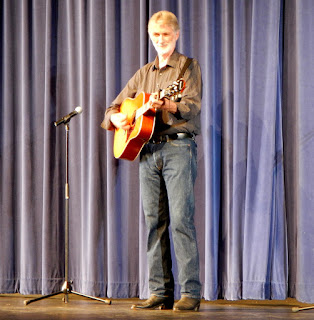 Stan played to all sides of the auditorium; you would swear that he looked directly into your eyes and he was singing a song just for you.  He admitted that the stage lighting was keeping him from seeing the audience well, but you would never have known it.  His eyes are piercing, but there is a gentle, kind, sweet soul emanating from them.  As Blanding resident, Terry Hatfield, told me later on, “He was that even in school, even though I was an underclassman and he was in high school, he knew my name and always said hello when we met. Just an all-around nice guy.”  My good friend, Amy Watkins Kensley, introduced me to Stan’s music by giving me a great present, the double album “Songs of Old San Juan” (Down From the Mountain/Cowboys, Indians and Mormons).
Near the end of the concert, Stan talked about his friends and their high school band; he asked for the lights to be turned up and walked down the stairs to be closer with the audience.  Switching to the same guitar he used in this band, Elvis Presley songs were then played, and everyone roared with pleasure, especially the women. 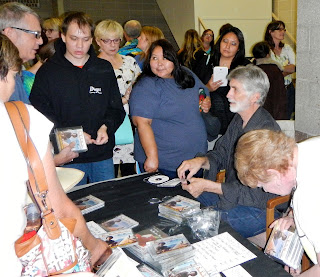 Afterwards was the meet and greet; CDs purchased were autographed by Stan; I even got one of his handkerchiefs autographed…going to frame this for sure!  Photos were taken, hugs; it was great…sorry Bruce Springsteen, you’ve got nothing on Stan Bronson.  Totally a most awesome night of music, storytelling and overall enjoyment.

By the way, I did film some of the concert; not all as, well, my arms were getting tired from holding up the camera.  I am very happy I didn’t film it all; the up close and personal sensation of watching, and listening to, Stan was a deeper impact than experiencing it through video.  If you want to see his performance of “Blue Mountain” though, go to his link: https://youtu.be/EHOJXXMZtiA

Posted by Four Corners Foodie at 11:25 AM