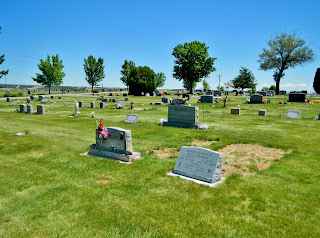 I've already given honor to Bluff Cemetery and Monticello Cemetery, so it's about time I get to the third of the San Juan County Pioneer Triad, Blanding Cemetery (Route 191).  The original pioneers from Bluff didn't stay there exclusively; they sent families to settle in the other two areas as well.  Blanding was originally known as "Grayson" (after Nellie Grayson Lyman, wife of settler Joseph Lyman), but changed to its current name due to a contest sponsored by wealthy easterner, Thomas Bicknell.  Heh, we east coasters are such cool folks.  Anyway, "Grayson" became Blanding (1914), the maiden name of Bicknell's wife, so the town library received 500 books...good deal! 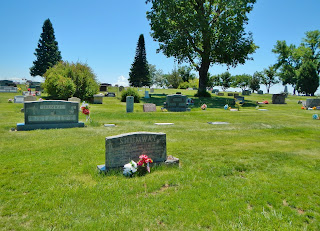 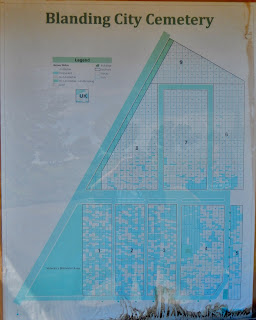 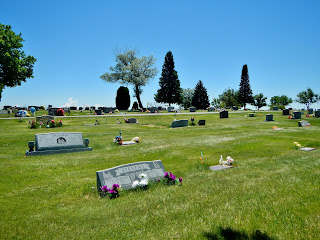 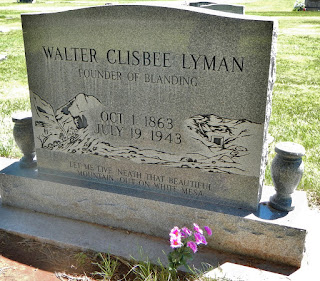 Walter Crisbee Lyman is credited as being the "Founder of Blanding" (1905) and was extremely active in the development of the town as a whole. It was his idea to create the tunnel through the Abajo Mountains to bring water to Blanding; he also did the survey work. 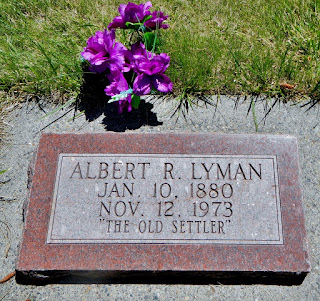 However, it was Albert Robison Lyman who was the first settler, and built the first home; along with his wife, Ellen (nickname "Lell').  Before she died, Lell asked her sister, Gladys, to watch over her family, so it was no surprise this request was taken deeply to heart, and Albert married her.  Albert wrote many a book about San Juan County, and his art studio is still around, located in the park next to the Blanding Welcome Center. 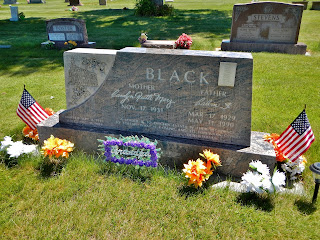 Calvin Black was an advocate for development of San Juan County, and a leader of the ''Sagebrush Rebellion,'' which challenged the Federal Government over control of public land. 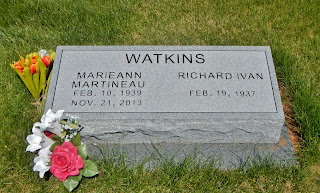 My friend, Amy, was my tour guide throughout the cemetery, so I received much of my information from her, and filled in the blanks from online sources.  So, lets get to Amy's family, since I've mentioned her.  Her lineage is the Watkins family, Richard and his wife, Marie Ann Martineau, who moved up to Utah from Mexico when Pancho Villa made the Mormons a target.  Marie Ann was, herself, Mexican, and life in Blanding was difficult due to prejudicial mind sets; but she raised a good and decent family nonetheless.  While at the cemetery, her spirit made it known that she was proud of Amy, and was very happy that we were friends.  I'm not a "hugger", so she did not hug me, but gave me the most beautiful smile.

There were several unusual, yet interesting, grave markers; quite unique in the depiction of the person they represented. 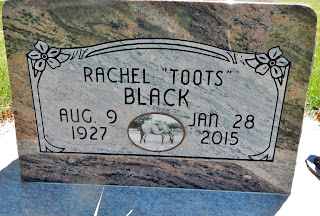 While not being highly unusual, there is a photograph of Rachel Black on her marker, posing with, I presume, a favorite horse. 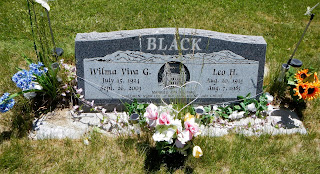 ...and Leo Black, among other things, loved the Ford Model T automobile. 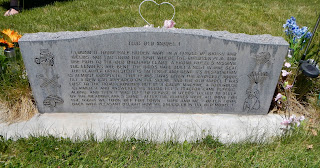 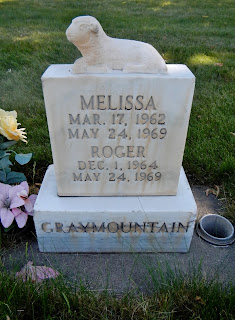 Something I noticed in this cemetery is the large amount of children's graves; lack of water and shade in this area might be a large contributor, but those uranium mines weren't much help in staying healthy either. 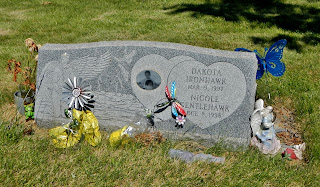 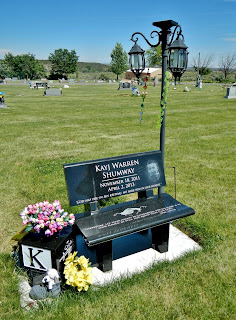 There are grave markers that are simply lovely. 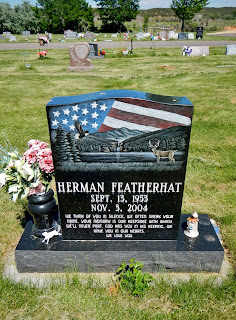 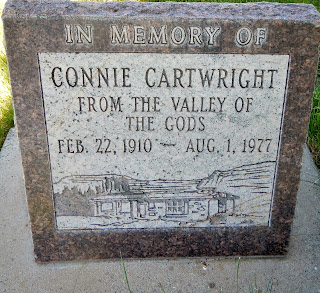 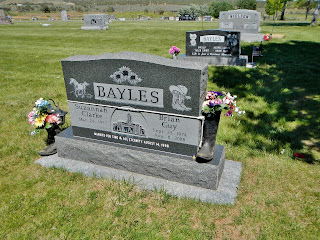 There are two Veteran Memorials, as well as a Retired Flag Burning Pit created by an Eagle Scout troop. 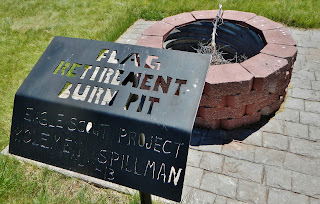 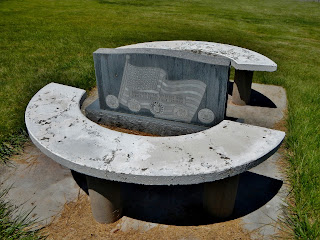 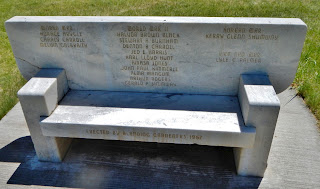 Which now leads me to show you some of the military grave sites. ﻿﻿


Jason Ray Workman was a highly decorated Navy Seal; he was one of 38 killed when a Chinook helicopter went down in Afghanistan. 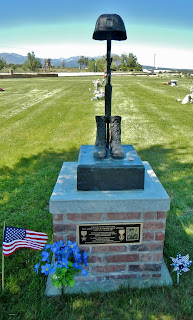 Nathan Lloyd Winder was a recipient of the Purple Heart; he sadly died in combat.  I couldn't stay by his grave for very long; while his body is in Arlington Cemetery, his spirit is here in Blanding, and he is extremely sad. 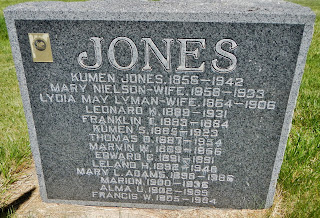 Kumen Jones, one of the Hole in the Rock Pioneers, has a grave marker which lists his name, two wives, and names of his descendents. 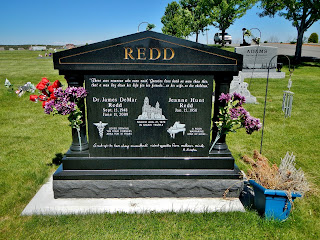 Last, definitely not least, is Doctor James Redd; the Indian grave robbing Federal sting happened the same year we moved to Monticello.  Several people supposedly committed suicide, Dr. Redd being one of them.  I've heard many a person's opinion on the subject, and all I can say is, any people involved, still alive that is, should come right out and tell the truth of his story.  Settle it once and for all; then again, living in this area of small town gossip, will it ever really be settled?
I didn't know the man, but the San Juan Hospital staff has nothing but praise for him, so that's what I'll base my thought on the type of man he was....not gossip.

This concluded my visit to the Blanding Cemetery; thanks Amy for the tour and history lesson!

Been having lovely discussions with Dr. Redd's son, Jay.  He has given me three links to share with everyone to further educate us on his father, Dr. James Redd.  Thank you Jay, and through your writings to me, the love for your family does come out.

LA Times Article, "A Sting in the Desert"  website: http://graphics.latimes.com/utah-sting/

Jay Redd gives a speech about his dad in Blanding. website: http://youtu.be/PGA8T2gsQrw

Senator Hatch questioning Attorney General Eric Holder about Dr. James Redd and his death because of the raid on his house. website: http://youtu.be/XvzwF-KPHlk