Huck's Museum and the Promise of Fried Chicken.

Before I can actually tell you about Huck's Museum and Trading Post, I'll need to tell how we got there in the first place. We had just spent several hours hiking and exploring the Old Pioneer Dugway (outside Bluff, UT), and the slickrock ledges above it (that's for another post).  While I had brought along snacks, that wasn't enough for Roy and he wanted to hurry home as I had promised to make him fried chicken.  As we traveled northward, along Route 191, we were passing by Huck's and the OPEN sign was by the road, the neon sign inside was lit.

Now we had often passed by Huck's, but it was either closed, or we were hurrying off to elsewhere.  It was Sunday and we were surprised to see the open signs, but I told Roy I wanted to go in.  He kept driving though and pretended he had not heard me, so I asked him, "Umm, the museum, are we going?"  He replied, "I'm hungry and want fried chicken."  We were now two blocks away when I replied back, "You want fried chicken?  I want to see the museum; it's open, we're here; no museum, no fried chicken!"  Roy slowed the vehicle, checked traffic and did a U-turn back to Huck's. 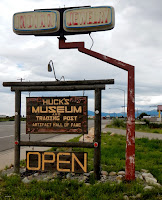 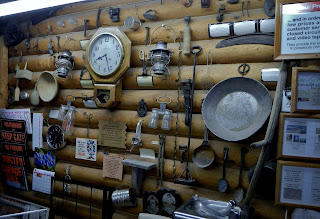 The entrance to Huck's brings you directly into the trading post with all manner of knick-knacks for sale; the majority of them are Native American in origin (jewelry, pottery, Kachina dolls, carvings), local books and Blue Mountains Shadows, the magazine of San Juan County.  There are also old time artifacts on the walls, so you're sort of in a museum without being in the actual museum. 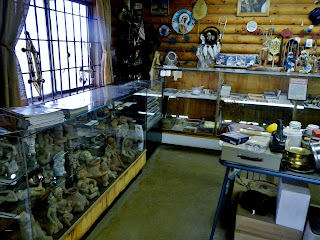 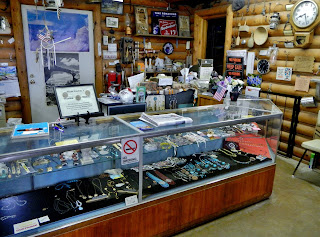 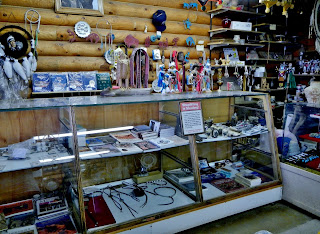 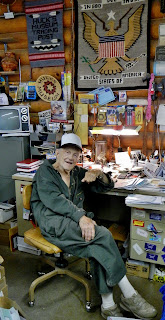 Now, as Huck told us later on, he's a hoarder; as soon as he empties out one area, it simply gets piled up again.  No wonder then that you won't notice him right away sitting by his desk, so don't jump when you hear his low, raspy voice say "Hello".  Hugh Acton (aka Huck) is, at first glance, a man of small stature (5'1"), frail and bent from the vestiges of age (87 years old), and cancer of the throat explaining the voice.  It's the eyes that give away that this old man is full of life yet; his tales are knowledgeable about San Juan County, and he is a pip!  Don't underestimate him; he's not dead yet and is still full of surprises! 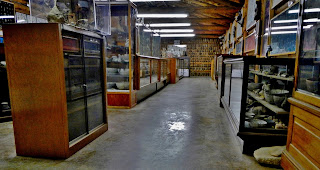 The fee for the tour is $10 and well worth every penny and while the handwritten sign says "no photos allowed", he might just let you take one.  Huck owns and runs the museum/trading post on his own, and you can hear the love for his labors come through as he tells his tales.  There are mind blowing collections of arrowheads, beads, jewelry, tools, all types of pottery, axe heads (462 on one wall alone!) and sandals made from various plant fibers.  Thousands of artifacts, some of which he reconstructed himself, are housed in glass display cases that he built, designed, and labeled. His collection includes donations from local residents of the county, as well as artifacts from other sites throughout the United States, Mexico, Peru, and around the world. The "Hall of Fame" is a collection of artifacts sent to him by people from all over, who have visited the museum and knew he would appreciate their gifts.  He carefully labels each one with the name of the donor and the location where the artifact was found. 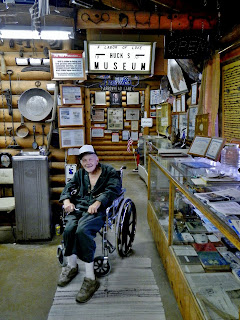 We developed an easy rapport with Huck; the first story he told was of when his father went to the 1934 World's Fair in Chicago and brought home a model of a Grey Hound bus.  "Well funny that." I said, "When I was a little girl, I went to the 1964 World's Fair in New York and have lots of souvenirs still."  His smile got so big, and I bet he was hoping I'd donate them to his museum.  He asked us many a question and was pleased when we showed we knew much about San Juan County.  Huck showed us the golden shovel he was able to keep from the dedication ceremony of the new Four Corners Monument; he was so proud!  By the way, did you know that the Anasazi invented the microphone?  No?  Then you better head on into Huck's and see the proof of it all.  We oohed and aahed, we smiled and laughed till our faces hurt; this was one experience that would remain memorable!

Huck himself must have had a really good time with us; he actually offered to give us our money back as a thank you for making his day...we refused of course.  After we left I asked Roy if he was glad we stopped and I made him wait for his fried chicken.  Oh yeah, he was happy, and that chicken was simply the ending to a great day.