Back to the "Around Bluff" pamphlet and checking off another place; this time the Old Pioneer Dugway.  Using Bluff Fort as the reference point, travel south on Route 191, past the 191/163 junction (so now you're on Route 163) and make a left onto CR 2691, Bluff Airport Road. That was a total of 5.2 miles in driving on a paved highway; go 2/10ths of a mile down the Airport Road and there will be a two track, dirt road on the right (a pipe will be sticking out of the ground).  Now the real thrill ride begins, so you better have a 4 wheel drive vehicle, and not mind being bumped along for 1.5 miles. 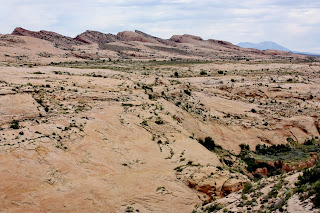 Now while some folks refuse to go out if it's not 100% sunny, we love those partly cloudy days that keeps the sun from beating us down.  The play of light and shadows makes for great scenic shots; we definitely saw that being played along the Comb Ridge as we drove parallel to it. 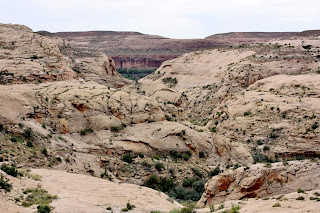 After shaking, rattling and rolling along for 1.5 miles, we reached a slickrock area which stretched to the right and left of trail end.  We parked on a relatively flat section, grab our gear, including bottles of water, and began exploring.  At first, we didn't see the cairns heralding the beginning of the Dugway trail, so wandered off to our right along the slickrock. 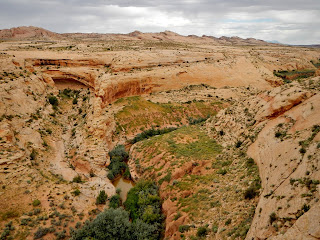 Slickrock, shrub bushes, grottos, alcoves; what looks like desolation to some, is fascinating and beautiful to us.  We're always keeping an eye out for the hidden, that simply decides to make its presence known suddenly.  So it was with a set of ruins we found in one of a series of alcoves; oh yes, we have learned to look, and look often. 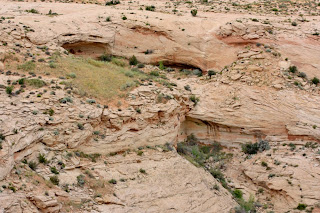 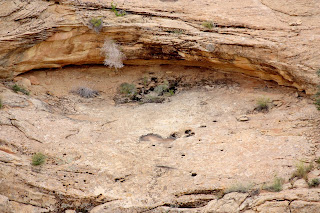 Whether there had been ruins in any of the other alcoves will be a mystery. 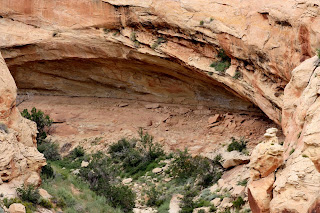 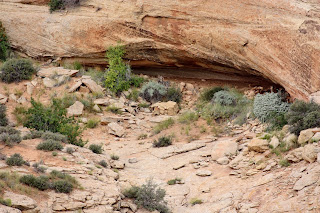 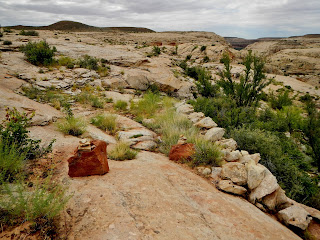 Back to the SUV, ok, so no cairns to the right; we finally spied them when we walked over to the edge of the slickrock ledge and looked to the left.  The largest of the stones is a deeper red than the surrounding area; the trail itself is over an all natural terrain (sand and rock), wide in spots, more times narrow.  Occasionally we could see where the rock had been chiseled out, or the mark of wagon wheels had dug grooves into it.  At the end of the first downward part, we found a stone wall, but were not expert enough to tell if it was ancient ruins, or simply a stone wall built by more modern hands. 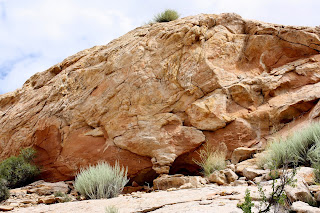 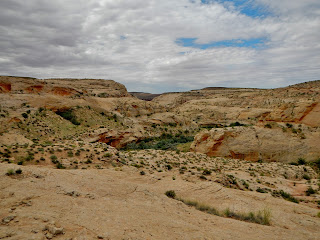 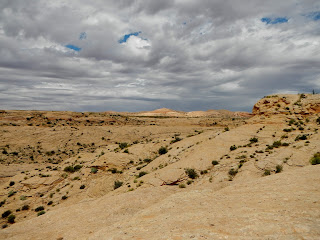 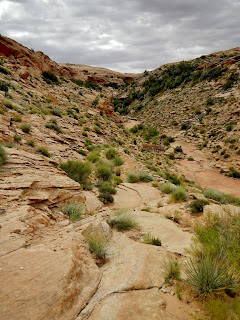 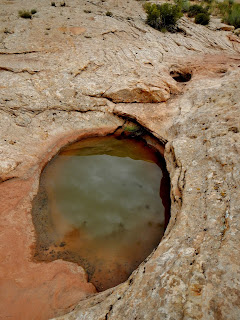 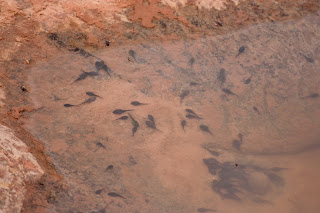 Since it was monsoon season (July), the potholes were filled with water, and tiny creatures were swimming away...tadpoles.  No Roy, we can't take them home and keep them as pets!!! 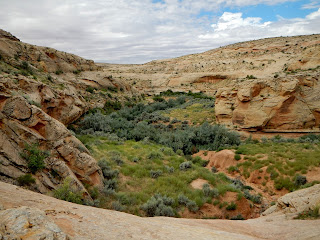 This was one of the roughest trails we've walked yet; up, down, twist, turn, wide, narrow; ledge walking with the San Juan River directly down to our left.  It was very important to pay attention to our footing, if we didn't want to tumble down into the river.  Any ideas of taking in views, or snapping shots, meant stopping completely; otherwise that next step would have been a doozy! 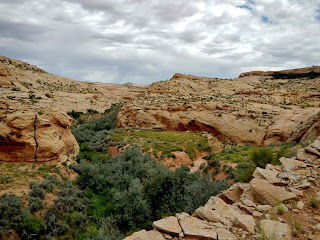 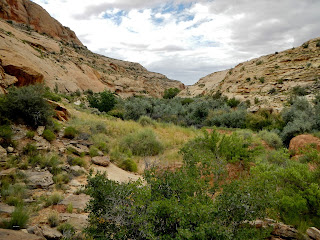 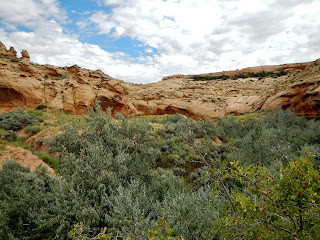 Onward we went, occasionally seeing shoe prints left behind by other travelers; actually that helped a lot to keep us on the correct path.  There were no other cairns along the way, so shoe prints, wagon wheel ruts and apparent chiseled rock were our only leads. 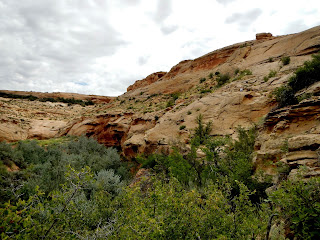 At one point we stopped to see how far we had come, while it had seemed like miles and miles; it was closer to only a mile, mile and a half.  Another area of ledge walking brought us to a wider area where there was a small alcove, and obviously used for camping.  Looking back, we could barely make out our vehicle sitting all alone on that slickrock ledge area. 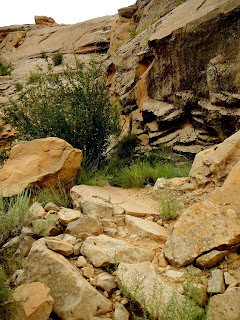 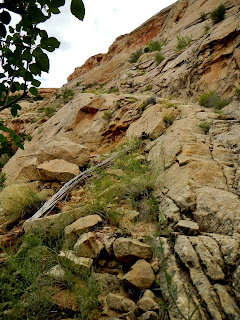 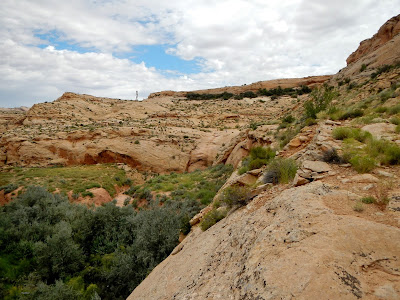 We figured we were at the two mile mark when we came to, well an area of path confusion.  The pamphlet said "The petroglyphs are on the left at the river where the wash enters the San Juan River."  Two paths leading downward towards a wash, we followed one which ended at top of the wash, and no where else to go.  Hiking back up, we followed the second path downward and came to the same conclusion.  We saw a third path that led narrowly along the rock walls, but with all the rain we'd been having, it looked like a small avalanche had piled dirt and rocks along a good section of it.

Decision time...finding the petroglyphs were not as important as our safety.  We could try and maneuver over the avalanche, but what was waiting for us on the other side?  What if the dirt and rocks gave way and we slide down, down, down?  Decision was, we turn back and do this again; perhaps in the fall when the greenery fades for the upcoming winter, and we could see more.

Going back was just as rough, the downward sections are steep, and feel even steeper going back up.  I pretended my legs didn't hurt so much when I stopped to take a photo of lizards or plants.  There were times though that I thought I could actually hear my muscles scream...no, no, that was a hawk flying overhead.  Bet it was laughing at us! 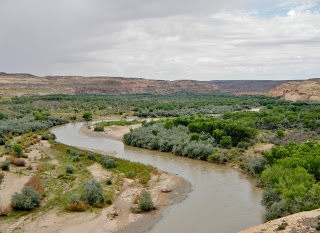 After getting back to the vehicle, we did not go home immediately; our muscles hurt, but that doesn't mean we had no energy.  We drove down the airport road to another dirt trail we'd seen months before.  It was only a mile drive before it ended at an overlook of the San Juan River, but what a view it was!

Overall, this was an awesome adventure; roughed, impressive, demanding and it tested us fully.  Yeah, we had a great time; especially when we went to Twin Rocks Café for those great Buffalo Wings and Prime Rib Sandwiches with Fries.  What an ending!!!