In 2016, the National Forest Service removed the last remnants of the ski lift, rails and lodge from the old Blue Mountain Ski Resort. Recently an article came out in The Salt Lake Tribune, written by veteran reporter, Tom Wharton: http://www.sltrib.com/home/4914696-155/whatever-happened-to-blue-mountain
Happily, via personal email and phone calls, I assisted Mr. Wharton in gaining information, and photographs, for his story.  So, in his article he wrote that I was a "San Juan County historian" when, in fact, I am more of a historical researcher.  This is a common feature in my travel and food blog posts, as well as my articles that appear in the San Juan Record; San Juan County's local weekly newspaper. 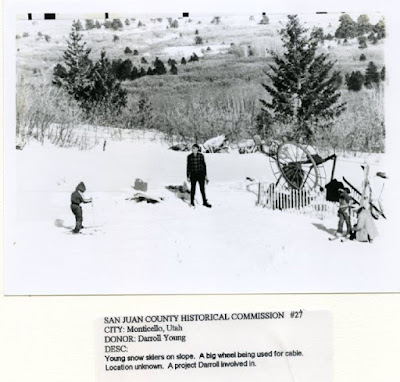 Oh, one more correction to the SLTribune article; Dave Krouskop is the retired manager of the Monticello Welcome Center, not the ski resort.  Luckily I was able to talk to Dave, who agreed to fill me in on the resort's history; and I did make him aware that this information was for a newspaper up in Salt Lake.  Dave remembers his sons complaining that the novice area (bunny slope) wasn't very steep; but many were concerned that "hotdoggers" would shoot across from the lodge to get to the steeper slopes.  Thankfully no accidents ever occurred; and happily, folks on Facebook wrote about their memories of the resort, ski lessons and the fun they had.  Unfortunately, no photographs of those good times to add to fond remembrances.
The resort had a small lodge with a fireplace; on the deck, food would be grilled on the outdoor barbeque; hot beverages were served for those needing a warm up.  Sadly, the resort closed its doors in 1990; Gene Shafer  (born 1931 - died 2011) was the man, not only in charge, but the maintenance crew as well.  His motto was, "If you can ski Blue Mountain, you can ski anywhere!", as these were the steepest slopes in Utah!
Several factors contributed to the closing of the resort; several winters seasons of slim to none snow fall; maintenance, licensing, inspection and insurance costs were high.  No snow meant no skiers, no skiers meant very little funding to offset all those costs.  In 2005, Ray Grass, of Deseret News, did an article on Utah ski resorts which became defunct, and Blue Mountain was featured: http://www.deseretnews.com/article/600124184/Resorts-that-didnt-quite-make-it.html 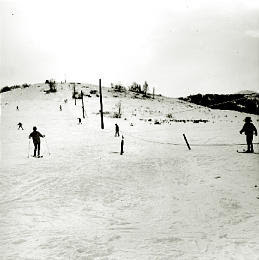 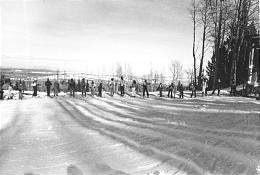 ﻿
The only remaining features to show that the resort existed are the road up to it, and the parking lot.  In 2013, Jared Hargrave wrote an article for UtahOutside.com: http://www.utahoutside.com/2013/12/backcountry-skiing-the-abajo-mountains/  Look back at the photo of the three male skiers; now the same area is popular for snowboarders. 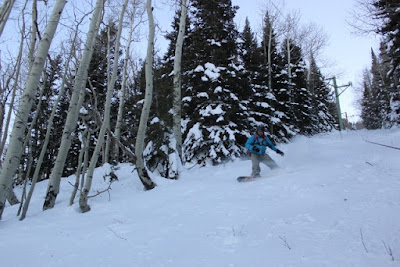 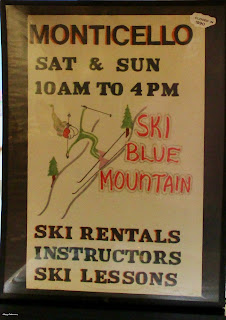 Of course there is the Ski Resort Poster that resides in the Frontier Museum, attached to the Monticello Welcome Center (216 South Main Street, Monticello, Utah, 84535); but nowadays memories, in the minds of those who skied at Blue Mountain, will remain far longer.
Personally I have no memories to share about the resort, as we didn't move to San Juan County until 2009. Then again, I'm not a skier; the idea of kissing a tree while speeding down a snowy slope...no, not for me.  I'll stick to hanging off ledges, and climbing up red rock walls without equipment; that's enough of a thrill.
Mary Cokenour
Posted by Four Corners Foodie at 11:07 AM